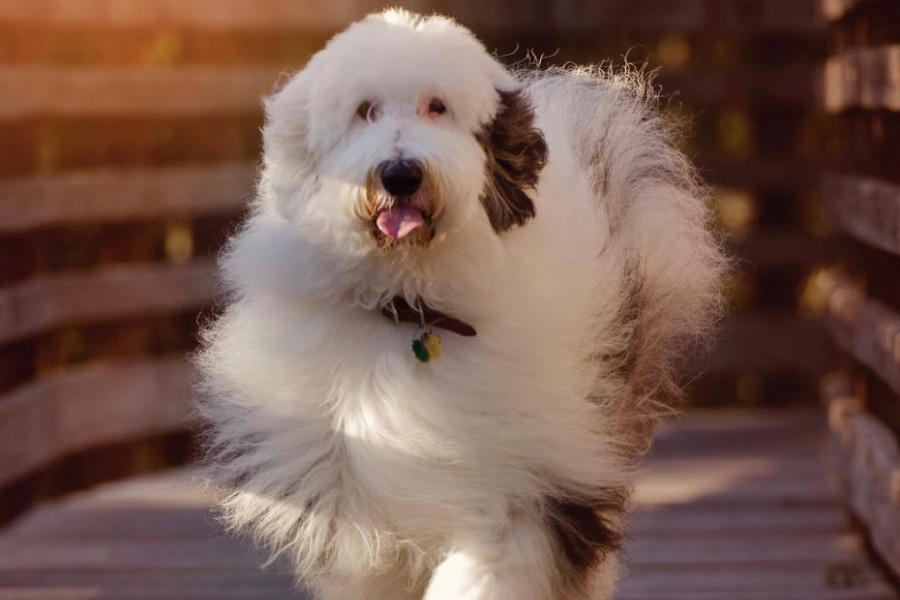 By Kieran Beckles
Updated on 6 January 2023

With over 130,000 followers on Instagram, Zammy brings joy to people around the world with his lovable demeanor.

Having trained as a therapy dog in 2016, Zammy visits Shriners Hospital for Children in Florida every Monday to enrich lives.

The giant Sheepadoodle that has been featured on some of the world’s biggest websites The Dodo, 9gag, UNILAD and BuzzFeed.

His Instagram videos interacting with patients at the children’s hospital, enjoying some ice cream and being goofy at home have all gone viral in the past three years.

We saw down with Zammy The Giant Sheepadoodle (@zammypup) to learn more about his therapy work and his Instagram success.

When Zammy arrived as a puppy, I had two daughters in college. They both insisted I get Instagram so that I could easily share Zammy’s new adventures. They wanted daily pics and videos so they could enjoy Zammy from afar.

2) How much time do you dedicate to building your Instagram page? 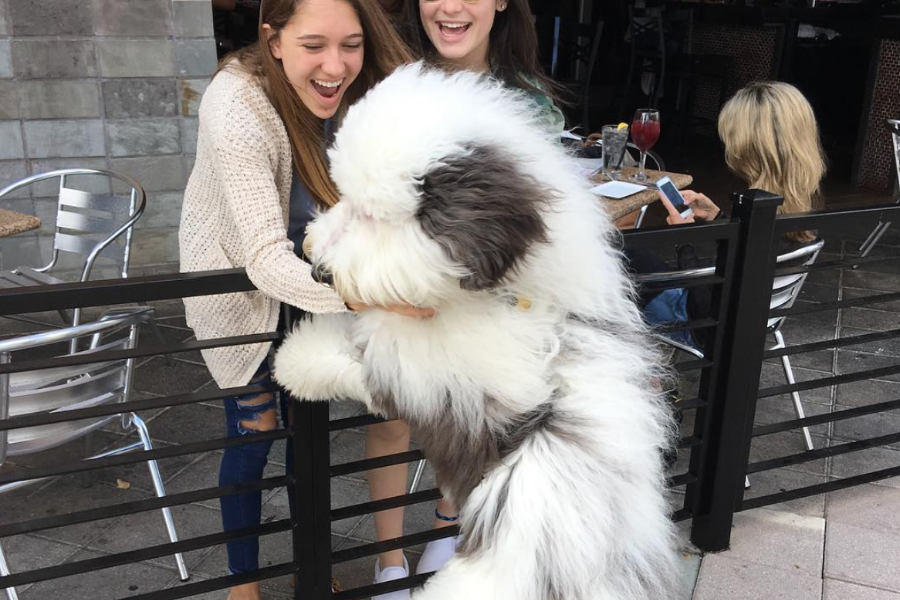 Initially it was just capturing photos/videos of Zammy and posting them. It was for my daughters. They shared with some of their friends and he ended up with 62 followers early on. Then one day I posted the now famous photo of Zammy that ended up going viral. That evening it was picked up by the sub-reddit r/aww (“Things that make you go AHH!”). The next day Zammy had over 4,000 followers. At that point I decided to take Instagram seriously and studied how to properly “do Instagram.” Now with 130,000 followers, I think we do a pretty good job spreading joy.

3) When did Zammy become a Children’s Hospital Therapy Dog?

My neighbor hosted a family from the Bahamas for an entire year while the 12-year old daughter (Shawnya) received repeated surgeries at Shriners Hospital for Children to to straighten her curved leg (from Blount’s disease). When Zammy was just six months old, I took him to meet Shawnya after her first surgery. She was in great pain…but when she was in Zammy’s presence, she experienced NO PAIN. I knew he had a special gift then, which was reinforced after every visit to Shawnya. When Zammy was a year old, I decided Zammy’s gift of spreading joy was just too powerful to keep to Shawnya and my family. So I decided to figure out how to get him certified to be a therapy dog.

4) What type of training is required to become such a therapy dog?

It’s really dependent on where you’d like your dog to “work”. Every hospital is different. I called Shriners and asked them what was required. They accepted accreditation from Project Pup out of Clearwater. I had to take Zammy through an all-day screening process at a senior care facility. After some basic instruction, they take you through somewhat of an obstacle course throughout the facility to see how your dog reacts with people and to situations.

What I didn’t realize was that certain seniors were actually actors who did things like drop their walkers in front of your dog to see what kind of reaction the dog has. Zammy aced his test, receiving a 25 of out 25 score. However, at the end, he was denied certification because he was not 18-months old. That was an oversight on everyone’s part because Zammy was so large. But there’s a happy ending to this story. The screener made an appeal to the person in charge saying that Zammy performed better than any dog she had ever screened. The rest is history.

5) How often does Zammy visit patients at Children’s Hospitals?

He’s the Monday morning therapy dog at Shriners Hospital for Children. That’s the only place I take Zammy because it is actually very demanding on a dog.

6) Is there a specific memory with Zammy that stands out?

Yes, it was when I took Zammy to get some ice cream. This video went viral — it was so amazing to witness his Wag-o-Meter go off the charts as he was standing at the counter enjoying his well-deserved ice cream treat.

7) Why do Sheepadoodles make such great therapy dogs? 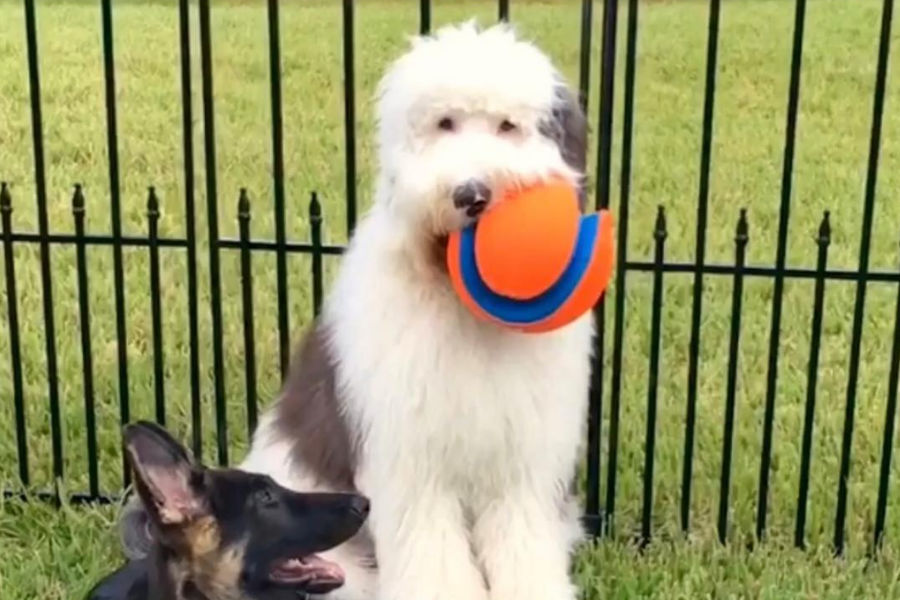 A Sheepadoodle is half Old English Sheepdog (patient, protective, kind) and a Standard Poodle (very smart, they don’t shed). The combination makes for a unique breed that has all the wonderful qualities of both breeds combined. Zammy specifically makes a great therapy dog because I have never shaved him. I can honestly attest, I think Zammy is the only Sheepadoodle in the world more than three years of age that has never been shaved. Why? Because people tend to lose the battle with the inevitable knots.

They end up giving their dogs a “summer cut”. When a Sheepadoodle’s hair grows back, it comes in spirally like a Poodle’s. So Zammy is extremely soft and “floofy” (he was voted “Floofiest Dog of Instagram”). The kids just absolutely love petting and feeling Zammy’s long hair — especially the autistic children.

8) What advice would you have for people considering a Sheepadoodle as a pet?

Don’t hesitate. Get one. You’ll experience so much joy in life, regardless of your circumstances. 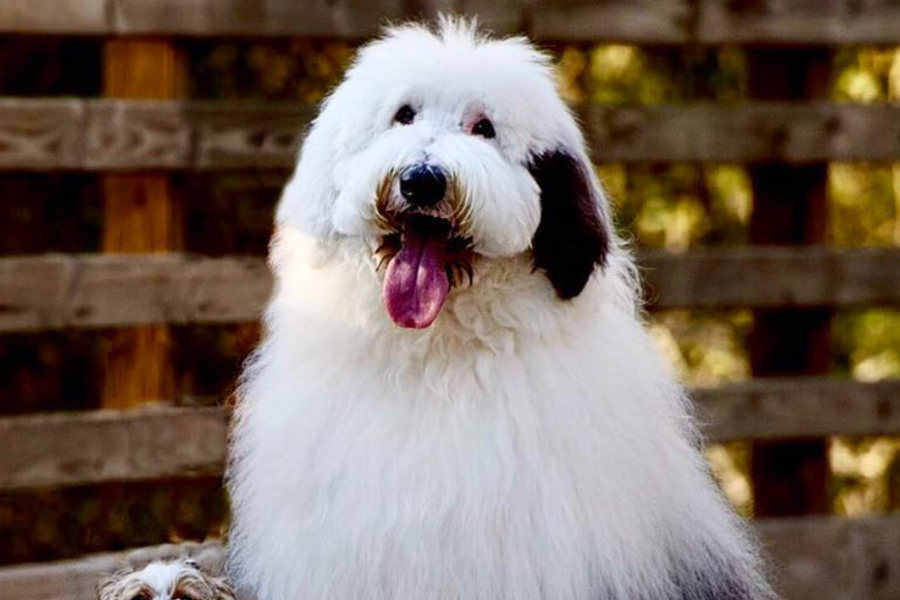 Consistently providing high-quality content relating to Zammy’s daily adventures. Zammy’s Instagram delivers a daily dose of joy. It’s entirely Rated G and delivers on the promise of unconditional love and happiness. I’ve received so many direct messages from people all over the world telling me, “Zammy is MY therapy dog too!” Zammy’s following friends are intensely loyal. Additionally, I acknowledge every single comment within all Zammy’s posts. I treat Zammy’s followers as extended family. Here’s something I penned that sums up all things Zammy:

“The fact is, if everyone Loved Like Zammy, there would be no pain sadness, tears, loneliness, hunger, strife, or division. There would be no handicapped, no race or religious differences, no judgement or hate. Why? Because when you witness Zammy interacting with others, he sees through ‘his’ untainted eyes…which are filtered by one lens only – love.”

10) What other Sheepadoodle account would you recommend helloBARK! readers check out?