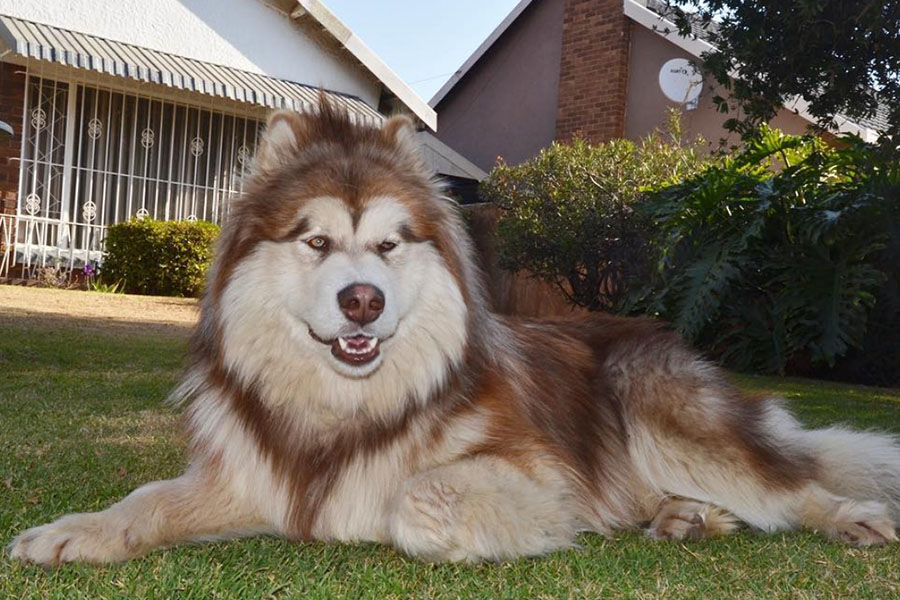 By helloBARK!
Updated on 11 August 2021
Exclusive

When you think of South African animals, you probably think Safari wildlife.

However, Tydus is firmly putting Alaskan Malamutes on the map in South Africa thanks to his large social following.

The red and white Alaskan Malamute has over 160,000 followers on photo-sharing app Instagram.

Tydus will often star alongside his African grey parrot Trez in his Instagram posts.

They’ve featured on big media platforms such as 9gag and The Dodo.

We spoke to Trez (@trez_and_tydus) to learn more about his life in South Africa as well as more about the Alaskan Malamute breed.

1) What first attracted you to the Alaskan Malamute breed?

We initially wanted to get a Husky or a German Shepherd. At the time, we had no idea about the Alaskan Malamute breed. We came across the breed and were intrigued by their personality and the fact that they are not as hyper as Huskies – not to mention their amazing look and stature! We undertook some research and had our mind set on getting a malamute.

We found an Alaskan Malamute breeder here in South Africa and inquired about upcoming litters. We had to wait almost 2 years for the next available male. We went to see Tydus at 2, 4 and 6 weeks of age, spending hours with him during each visit. Finally, the wait was over and we took him home at the age of 8 weeks. I still remember the first time we laid our eyes on him and instantly falling in love with this bundle of joy!

Well he has a very strong personality. This is a breed trait. They are very intelligent and will often make up their own mind and do what they want. He is very loving towards his mom, gentle with his grandmom, only sees food with his grandad and very obedient with his dad as he has done most of the training. He is also very stubborn at times and we require much patience because of this. He is maturing and now enjoys just spending time with family members – not to say he isn’t friendly with strangers. He is still a complete goof at times.

4) Has owning an Alaskan Malamute lived up to your expectations?

We weren’t 100% sure what to expect as we have never owned a Malamute before. In fact, Tydus was our first dog. We were in for a ride. The puppy stage which lasted for about seven months was a roller-coaster ride for us. We had torn pants, stolen socks – we couldn’t even pick him up as he hated it and would squiggle his way out like a little worm. But it’s a joy owning a Malamute – or rather being owned by one! They really are a special breed. They do require a lot of exercise and mental stimulation to keep them away from trouble. So it is a demanding yet satisfying experience. 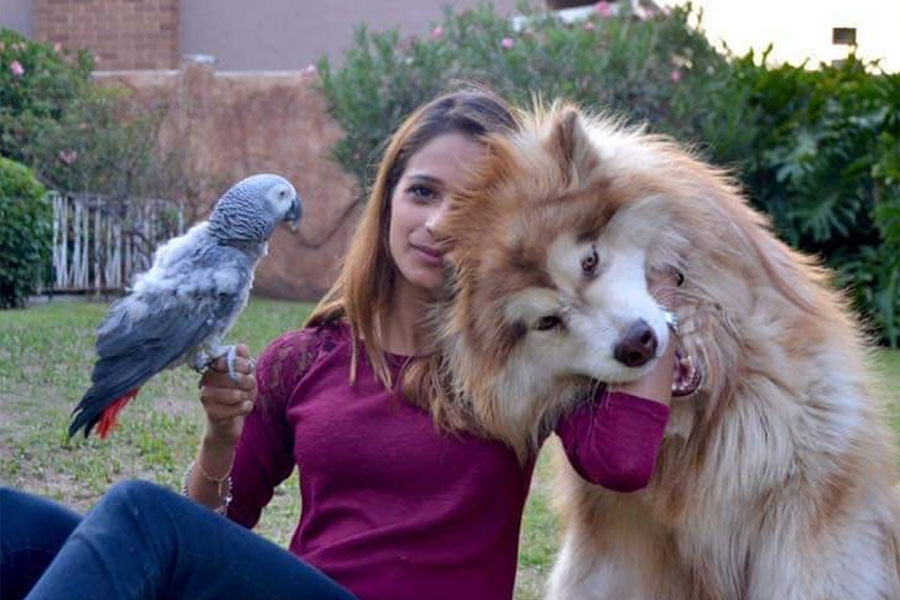 Trez is much more vocal. He is our African grey parrot and has a motor mouth! He warms up his voice box every morning at 6am. Tydus starts howling as soon as he hears an ambulance or whenever he is bored. Trez will then pitch in and say: “Tydus stop it. Good boy!”. Trez comforts him by talking to him while they are alone. They don’t really get along that well. Trez is very dominant and won’t think twice about biting one of Tydus’ paws. We always monitor them and would never leave them alone with each other.

6) Are there many Alaskan Malamutes in South Africa?

You do see Malamutes in South Africa – but they are rare. It’s not every day you will encounter one at the dog park. There aren’t many breeders here. Many people are still unaware of the breed and often mistake him for a large Husky. We love encountering another Malamute owner because we can just complain for the next 20 minutes to someone who understands.

Not ideally. They prefer the cold and snowy areas. They are capable of living in a warm climate such as South Africa and no more susceptible to a heat stroke than a German Shepherd. That is a big misconception. Their coats keep them warm in winter and cool in summer. Having said that, I would not suggest getting a Malamute if you live in a hot climate where temperatures regularly exceed 28 degrees celcius. Being a Spitz breed, they are more comfortable in cooler weather.

8) Do Alaskan Malamutes require a lot of exercise? 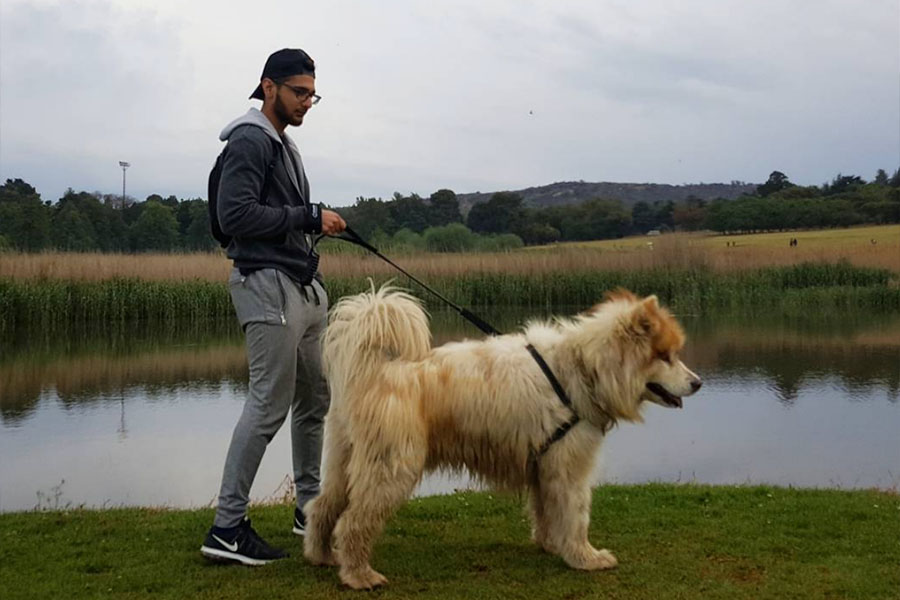 They are an active breed and not suited for a laid back owner. They are most happy when out on a walk. They need to be exercised daily for at least an hour. If not, they tend to build up excess energy which will lead to a torn couch or a monster hole in the backyard! They also need to be constantly surrounded by their “pack” and despise being left alone or unattended.

Let’s put it this way. Our yard is like a snow globe! He sheds twice a year. He has a long wooly coat rather than the standard coat and thus requires grooming more often, at least three times a week. If not, his coat develops knots which then have to be un-mangled.

10) What do you know now about Malamutes that you wish you’d known before you got Tydus (to be more prepared)?

We had two years to do research on Alaskan Malamutes so we were well prepared. But for new owners out there I would say spend time with a Malamute before getting one. Maybe a friend or family member has one. Talk to various Malamute owners because each is different. So this might be a good idea instead of getting carried away with their looks as so many people do and then complaining a year down the line. I think it’s unfair and cruel on the dog to get one without doing relevant research on that particular breed. Always prepare!

11) What advice would you give to someone considering an Alaskan Malamute?

I think this relates back to the previous question. Research and lots of it. Prepare yourself mentally and make sure you have sufficient time to spend with your Malamute, especially during the puppy stage. If you are constantly away from home or work long hours, then it’s definitely not a good idea getting a Malamute as you would not be a part of their developmental stage which is vital.

12) Have you been tempted to get a second Alaskan Malamute?

We have been thinking about this for a while now. We came to the conclusion that getting another Malamute is not the best decision we could make. I think one Malamute is enough for us at this stage in time. Perhaps we will get another breed to accompany Tydus.

13) Why and when did you start your Instagram page? How did you gain such a big following (viral post)? 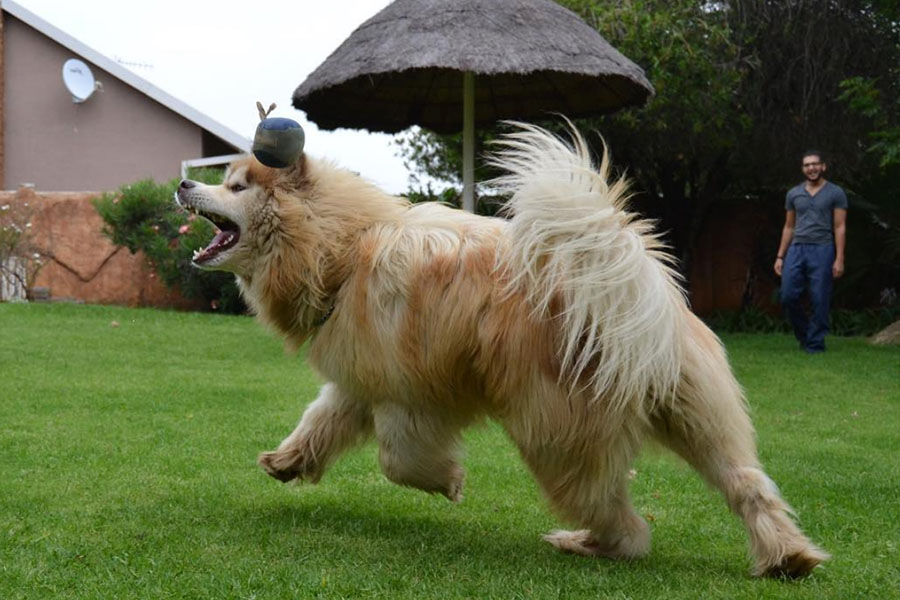 People would constantly comment on Tydus’ appearance, often calling him a bear or a lion. Hundreds of people have asked where we got him from and if he has puppies. So at 6 months of age, we decided that we should show him to the world. We were casually watching television and at the same time created an Instagram page for him – and of course included Trez. Before we knew it, we had gone viral on many platforms such as 9gag, the Dodo, Viral Thread and even landed up in a women’s fitness magazine.

14) Do you have any advice for someone looking to grow their Instagram page?

Be consistent with uploads. Try and capture your dogs’ personality and be interactive with your audience. Ask questions, have polls, etc. Create a page that really captures their personality and behavior. And take lots of videos!

15) What other Alaskan Malamute accounts would you recommend?

There are so many that spring to mind. To name a few they are: