Tonka The Malamute Questions And Answers 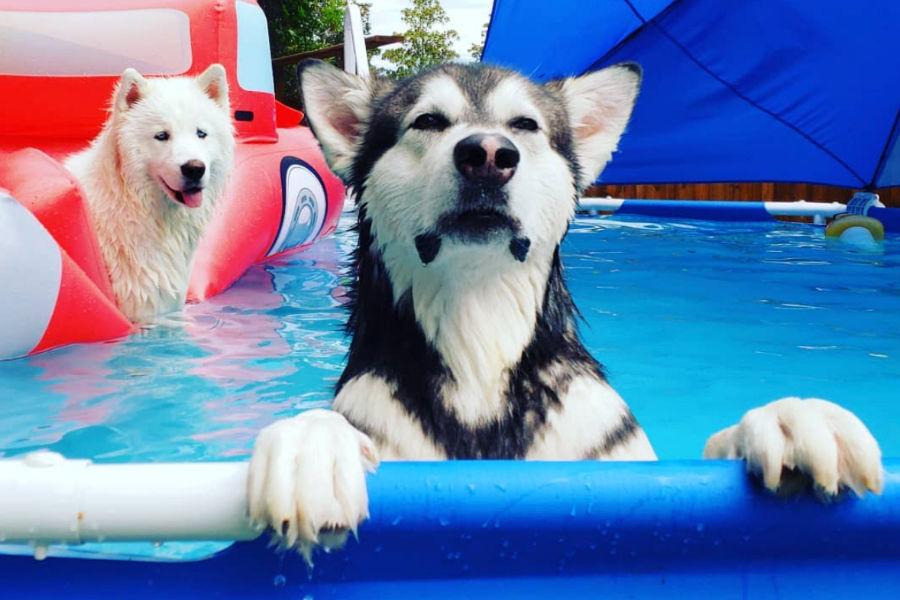 Dubbed the Waterwolves, they’ve got an incredible following of 107,000 subscribers around the world.

Their funny and upbeat videos have been viewed over 33 million times on the video-sharing platform.

Their mom Bonnie is the mastermind behind the YouTube channel, while they’ve amassed quite the passionate fanbase.

We spoke to Bonnie to learn more about her journey with Tonka and Monroe, as well as their success on YouTube.

You can subscribe to Tonka the Malamute AKA WaterWolf here.

1) How did you first hear about Alaskan Malamutes?

When I was in middle school a Malamute Husky Mix showed up at school. The bus driver wouldn’t let me bring him on the bus so my best friend and I decided to walk home with him (10 miles)! When I got home at night my mom was on her way to the police station with my picture. We put him at an empty house that had a fenced in yard and kept him there.

Their size and Wolf-like appearance was my first attraction. Then their temperament and loyalty!

That’s a long really cool story! The video above might help you condense it. I lost my Alaskan Malamute, Legend, after 12 and a half years! I knew I could not live without the unconditional love that only Jesus and a dog gives us! I looked online saw a picture and decided I wanted him. I contacted the breeder but she told me he had already been placed in a home. I was sad but I continued to look. I put a deposit down on an unborn litter. One day, I decided to check Craigslist for a Malamute not expecting to find one when I saw the saddest picture and decided to contact them. We met the next day. Tonka was full of worms and just look really bad. His coat was dry and dirty. I knew I couldn’t leave him with that man. So my husband and I brought him home. I looked at the paperwork and was shocked to see the name of the breeder and the name on the paper. I knew it was familiar. When I got home I went online to my emails and realized that Tonka was the first puppy I fell in love with and wanted but had already been placed in a home! My thought was God intended for Tonka to own me. The first week I realized his tail had been broken at some point and had already healed. He was afraid of men, especially if they wore hats! I knew he had been abused but you would never know that today!

4) What was it like adding Monroe to your waterwolves pack?

Tonka was sad a lot because his BFF Capone The Bully had moved out and his Cousin Woo The Wolf Dog had to go home when her Momma did. He would sit in the window and just stare out of it when they left. My foster father passed away and left me a small inheritance and told me to do whatever I wanted to make me happy. The next day Aunt Jen, Tonka, Woo and I were on our way to North Carolina to pick up the most beautiful girl I have ever seen! We were so excited! Tonka would not have to be alone anymore! The first time he saw her I was holding her and he started to growl! I didn’t think to much of it. That night when they were eating dinner in our hotel room Tonka tried to kill her. I was So scared. I was crying! I contemplated giving her back to her breeders. Aunt Jen helped calm me down and I realized that at the most I would have to keep them separated for six months. I knew once she
went into heat the 1st time he would love her! They walked together without issues. The day after we got home they were running around the backyard playing. Apparently Tonka is a Grumpy traveler!

5) Do they have similar or different personalities? If you could explain. 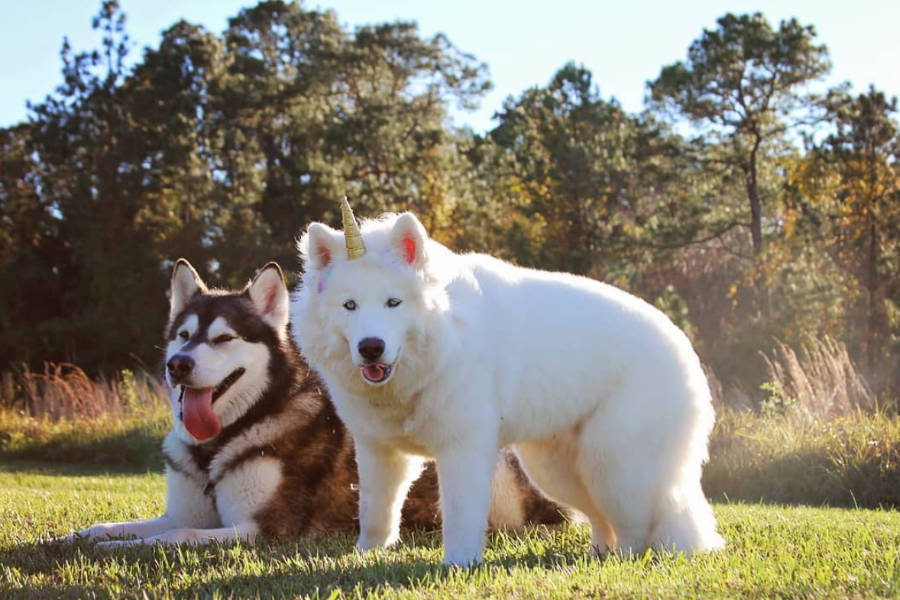 Their personalities are completely different! Monroe is calm and quiet while Tonka is impatient and argumentative. They are both more like people than dogs. I believe it’s because I treat them like people and I expect more from them and they never let me down. They are both Extremely Intelligent!

6) Do you think Malamutes do better with a companion?

I think all dogs do better with a companion! Malamutes and Huskies are pack dogs. Remember Tonka used to be sad when his friend left. Now that Monroe is here with him he no longer gets sad when they leave.

7) Are Malamutes difficult to train?

Seriously. they are very easy! Tonka learned to go get his plate when he was hungry very fast. They also mimic you! I have some video where you will see Tonka do what he sees us do. We always say he’s a little boy disguised as a Malamute. He will tease us just like a boy would.

8) Do Malamutes shed a lot? How do you cope?

Yes they shed a lot. It’s easy to clean up though! Short hair dogs shed all year too. Their hair gets stuck in the weaves of fabric and you have to pull them out individually. Alaskan Malamutes hair turns into tumbleweed and picks right up. We vacuum daily and we have special brushes to get the hair off of us.

9) Do Malamutes require a special diet? Are they expensive to feed?

10) Why did you start a YouTube channel for Tonka? 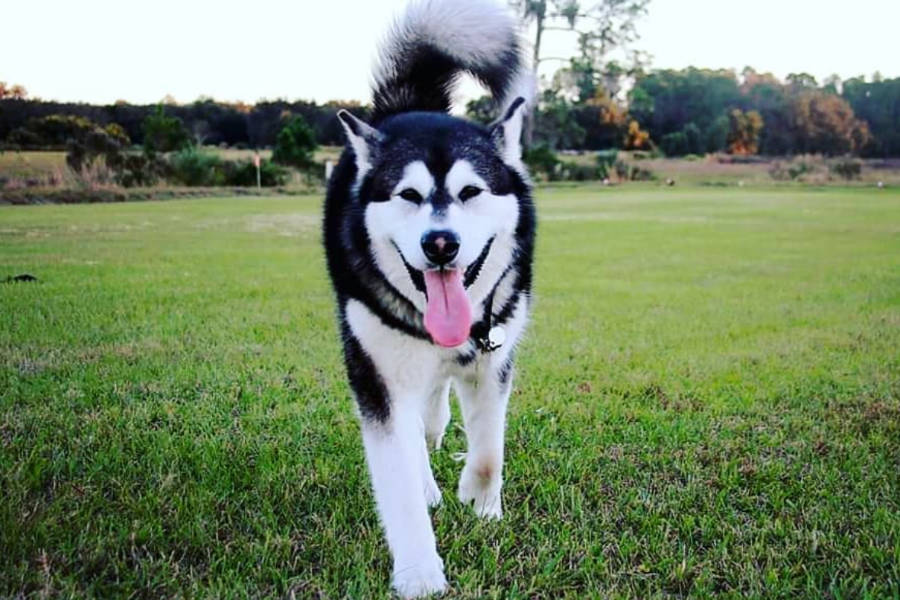 I just knew Tonka was special when my granddaughter Alana put him on our big round swing and swung him! He just laid on it and let her swing him. I was videoing it and my first thought was this would be a great YouTube video!
I didn’t start then but he kept doing things that I thought people would like to watch. I always said God put me here to make people laugh and I had no doubt he put Tonka here with me to do the same thing. I was an empty nester dealing with my babies being gone and I had lots of time on my hands so Tonka and I got into everything we could and I videoed it.

11) Did you have any experience with YouTube or has it been a learning curve?

I had no experience with YouTube! I have learned most everything on my own! Most other dog channels were not willing to even talk to me. I reached out but got no response. There was one other channel we kind of grew together
helping each other out as we learned things. That was Chadde at 1st 508th Airborne! It took me a year to get to 500 Subscribers and to make my 1st $100! I have always answered almost all of my comments and interacted with what we have always called our YouTube family. We have had so many people change their names to Aunt, Auntie and Uncle because they love Tonka,
Monroe and even me a little bit! I am different! I do all I can to help other channels! I believe we should build each other up!

YouTube introduces you to people all over the world We have some very close Aunties and Uncles all over the world! I won’t mention their names because you don’t have enough space to say all of their names but I have true connections with them! I have people tell me all of the time how our videos help them through depression, chemotherapy, heartache and even suicidal thoughts! You can’t get that anywhere else. YouTube has enlarged our family in ways nothing else could have ever done. I wouldn’t know them without YouTube!

13) For someone who recently started a YouTube channel for their dogs, what advice would you have? 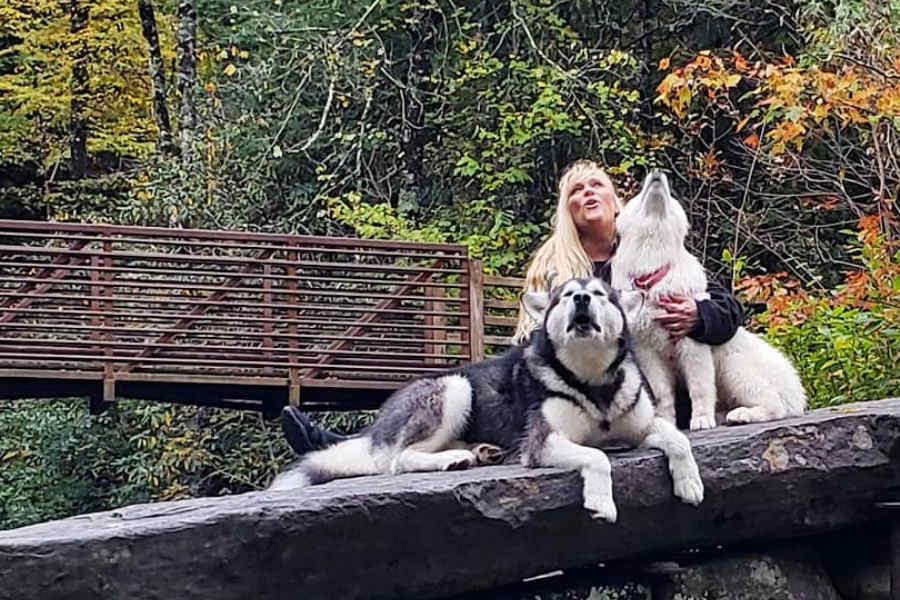 My advice is to build relationships with your viewers. Have Fun! Make sure you tag your videos with relevant searches to your content. Make your titles interesting and informative about your video and use GREAT Thumbnails! I have learned this past year that sometimes no matter how good your content is YouTube can and will suppress it! We used to be at the top of searches with Malamute and now you have to scroll pretty far just to find a video! YouTube is an up and down business! So you have to stay strong and keep posting great content even when you feel like quitting because your views are so low compared to a year before because you have people that need you.

14) Is there anything you would do differently if you could start over knowing what you know now?

If I knew why our channels views and Subscribers plummeted this past year and why we aren’t in the searches I would definitely do something different! But I have No idea what happened so I can’t say what I would do differently!

15) What other YouTube accounts for dog lovers would you recommend? 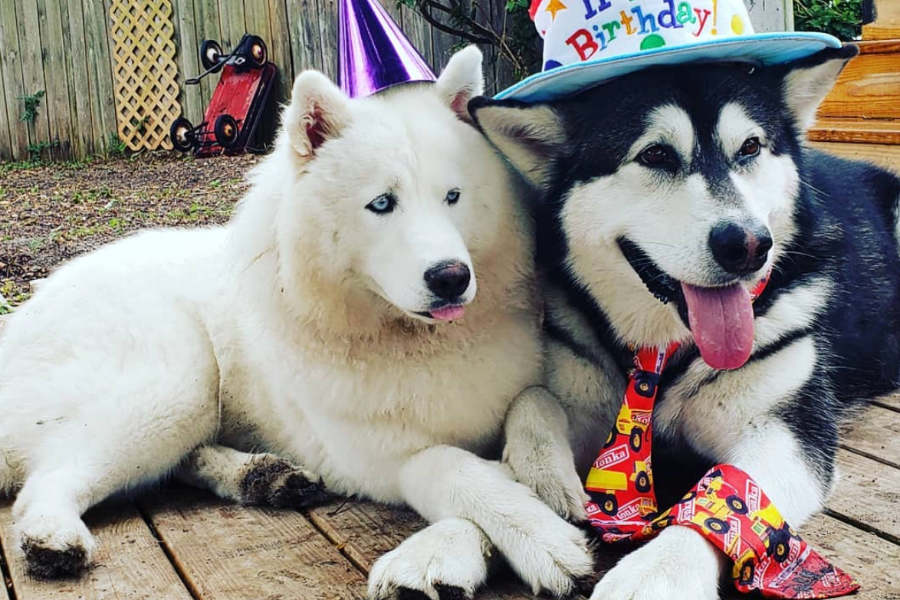 • They’re loving – Tonka demands hugs from me everyday! The first thing in the morning he has to rub all over me and won’t go outside until I have given him a proper hug or 10.

• I feel safe – With Tonka is very protective of me but not in an aggressive way! I watch him and he lets me know if I should be wary of people! If Tonka doesn’t like someone I know they must be bad because Tonka loves everyone.

• Aggressive – They can be dog aggressive because of their dominance! Legend was great with people, cats bunnies but not other dogs! I worked extremely hard socializing Tonka with as many other dogs as I could! Because of that, Tonka loves other dogs!

• Prey drive – They are hunters and small animals could be in trouble with them – Tonka has killed quite a few rats in our backyard and attacked a few opossums! He shows too much interest in cats and since he wasn’t raised with one and he’s attacked possums I keep him away from them. The attack weren’t vicious he just squeaked to the death! He Loves squeaky toys!

Oscar And Poppi The Cockapoos Q&A