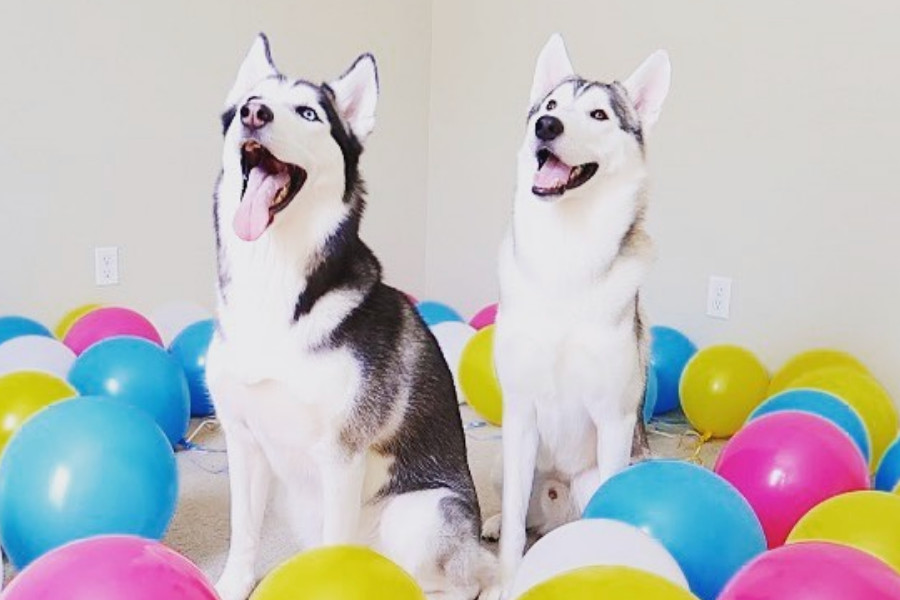 By helloBARK!
Updated on 25 February 2020
Exclusive

Siberian Husky siblings Hila and Britney Spears are the stars of the Sixty Formula YouTube channel.

These two beautiful dogs have built a YouTube following in excess of 60,000 subscribers and their most popular video has nearly 4 million views.

Hila and Britney Spears have helped to educate many viewers on Siberian Huskies, owning dogs in general as well as provided plenty of laughs.

In a bid to learn more about Siberian Huskies and YouTube, we spoke Sixty Formula’s Greg this week.

1) What first attracted you to the Siberian Husky breed?

I thought Siberian Huskies were a very pretty breed, very fun and friendly. I had heard they weren’t easy, but I love challenges so I immediately became intrigued! Just like most people, I jumped in and gave it a shot. It changed my life having a husky, for the better in almost every way!

2) How did you end up with Hila and Britney Spears?

I met a responsible breeder who had 1 husky puppy left. The family grew attached to it and it was their favorite. They even considered keeping her. However I came and picked up Hila at 10 weeks old and she was awesome! I have brought her back to visit the breeders, as they love her as much as I do. Britney Spears is from the exact same breeders. Making him a blood sibling of my first husky, Hila!

3) Can you give us an insight into the personalities of both Hila and Britney Spears for those who haven’t seen them on YouTube yet?

Hila is what you would imagine a husky to be like, personality wise. She has attitude, energy, and she challenges me every day. Literally challenges me to be the alpha! She’s a born leader and if I died tomorrow she might take over my YouTube channel (lol.)

Britney Spears is very beta. He has taken the role of second between him and Hila, a role huskies usually negotiate among themselves when they meet. Since Hila was the oldest and lived at the house first, she became the alpha over the two. This makes Britney Spears especially sweet, kind, and cuddly to people. He doesn’t like to challenge me, and instead would rather snuggle.

4) What are the challenges of owning two Huskies?

If you think one husky is difficult, never get a second. Two huskies is more than double the work, and certainly quadruple the poo! Often they have to do things separately because both of them together can cause one or the other to influencer or entice the other to misbehave. It’s a constant training session.

5) What are the perks of owning two Huskies?

On the other hand, having 2 huskies is great because huskies are pack animals and do well when socializing. Hila is MUCH happier having another husky in her life. They have each other when I’m not around and that’s important to me. I trade all the hard work so that my pups can feel like they have someone there at all times. Especially when I can’t be there.

6) Do Siberian Huskies need a lot of exercise?

Huskies do need adequate exercise! It’s not as bad as most people make it out to be. A couple walks a day, which become very routine and in some ways therapeutic should be fine. They will let you know if they aren’t getting adequate exercise by chewing things, digging holes, and getting the infamous “zoomies” 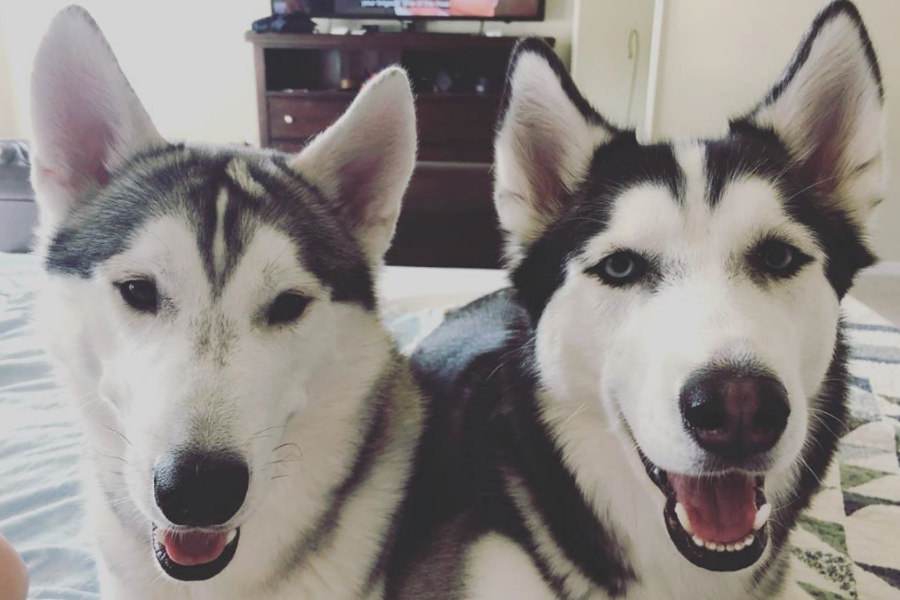 Siberian Huskies can be loyal when trained. It’s good to note though that most huskies are only completely loyal to their owners and often will ignore the commands of people they aren’t familiar with. So if you come up to Hila without my supervision and asked her to lay down, she might look at you like you’re a crazy person lol. Besides that, they’re amazing, loving and very rarely if seldom bite family members.

8) You’ve done videos on Separation Anxiety. Was this a big issue with Hila and Britney Spears?

Separation anxiety is not an issue with Hila, but it’s a serious issue with Britney Spears. One thing husky owners should caution is something called “litter mate syndrome” and this is when one dog becomes co-dependent in the other. Since Hila is the alpha between the two, Britney Spears sees Hila as his mother figure and gets very upset when she’s removed without him included. Hila doesn’t care so much lol.

9) How much do Siberian Huskies shed? Is a lot of grooming required?

Husky shedding is insane at times. It’s bad. You have to be on top of it, and there are methods to beating it! I have videos on the topic. Just get a great vacuum and get ready to vacuum every day especially if you have more than one husky. Also say goodbye to black clothes. They don’t stand a chance.

10) What advice would you give to someone considering a Siberian Husky as a pet?

The best advice I can give is do your research. Just watch YouTube, see how they act and behave. Pick up on their mannerisms and see if it’s the kind of animal that fits your personality! Just remember dogs are a huge responsibility and you shouldn’t get one unless you’re ready to dedicate years of your life to supporting and caring for them!

11) When and why did you decide to start your YouTube channel Sixty Formula?

I started my YouTube channel years ago, probably playing video games or whatever one does when one starts the tube of YOU! In 2017 I decided to do YouTube full time. It was a conscious decision. I know I had to try many things if I wanted to find a niche so I did just that. Collecting, motorcycle vlogs, dog training. I tried my hand at a lot of things. When the husky training videos got the most attention, I focused on them the most and eventually the other topics would get pushed aside.

12) Did you have any experience with YouTube or has it been a learning curve?

YouTube is ALWAYS a learning curve. There’s no book on it, and it changes so quickly so that if there were a book, it would probably be obsolete by the time it was published. I watched YouTube regularly, like television. Eventually I found YouTubers that I would watch everyday like TV shows. I pulled inspiration from their strategies and payed close attention to what worked and didn’t work for their channels and then applied the things that worked for them, to my own channel. I still constantly have to tweak things, even today. It’s a very fun but difficult thing to manage and keep up with. You really have to WANT to be a YouTuber. All pride and insecurities aside.

13) Why do you think YouTube is a great platform for dog owners (as opposed to over platforms)?

Well YouTube is the biggest search engine in the world behind Google (owned by alphabet who also owns YouTube). Youtube has established itself as the biggest content sharing site in the world, and it would be almost impossible for a new platform to trump it at this point. Instagram and tik tok are strong platforms as well, but for me YouTube gave me the creativity to expand a little farther than the other platforms allowed.

14) I just started a YouTube channel for my dogs – MyAlaskanKleeKai. For me and anyone else just starting off, what advice would have? Is there anything you would’ve done differently?

The best advice I can give is to post daily. Daily posting really grabs hold of people looking to become part of a community. People really engage when you paint constantly. It’s probably the hardest thing to do because you get really sick of doing YouTube after a while. That brings me to the next bit of advice. NEVER GIVE UP! Most creators that had been in the same subcriber count as I did 3 years ago have hundreds of thousands of subscribers. At many points in time in my YouTube career I gave up for months at a time before returning again. I would not do that again. People want consistency, and today a channel going just a couple weeks with no uploads faces a death sentence – in my opinion.

15) Do you have a favourite video on @SixtyFormula?

I actually don’t have a favorite video. I could name one off the top of my head that I really enjoy, but I now have around 300 videos on Siberian Huskies. I can sometimes hardly remember what I did in those episodes because every day I make a fresh new video.

16) What other dog YouTube Accounts do you recommend to our readers?

I would recommend the Husky Squad, a beautiful youtube channel that in my opinion deserves SO much more attention. No one really puts together quality husky videos like Husky Squad, and you can tell they’re amazingly compassionate. They’ve been friendly to us ever since we’ve arisen in the husky “scene”. I wish them the best if luck. They are true artists.