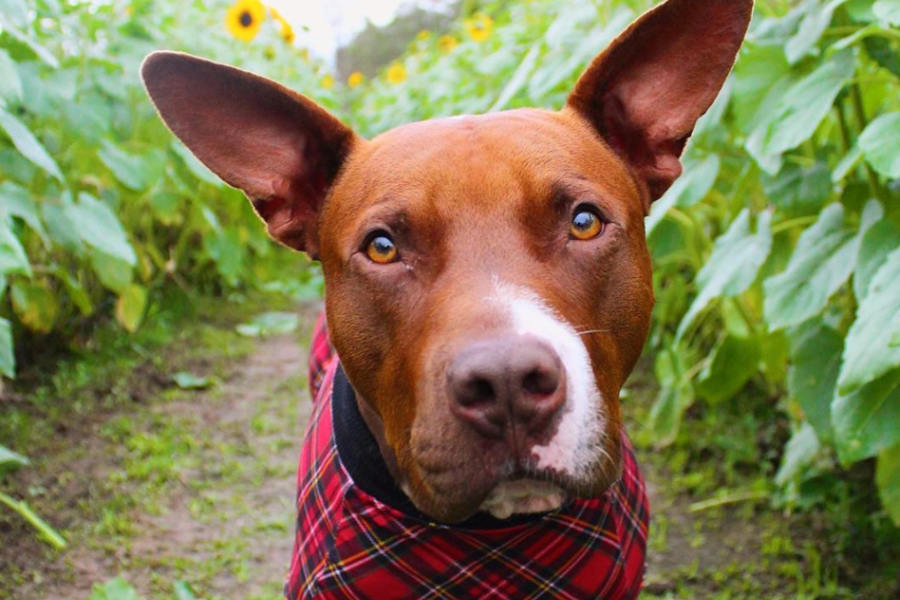 That’s a phrase that you’ll regularly see on Instagram as rescue advocates urge dog lovers to consider heading to their local shelter.

There’s no greater gift than giving a neglected dog a second chance, restoring care, happiness and love to their lives.

There’s no shortage of rescue dogs on social media that can brighten you day as they live their best lives having been given a second chance in life.

If you’re looking for some positive vibes and to learn about life owning a rescue dog, you can check out some of our favourite rescue dog accounts on Instagram.

In this article, we take a look at 20 rescue dogs to follow, although we were spoilt for choice with so many great rescues on the social media website.

Marley & Charles (@wildlyrescued) are two rescue pups living in the Pacific Northwest. These two rescue dogs love to go camping in the rugged wilderness in this breathtaking part of the USA. Occasionally you may spot this charming duo with our Klee Kai friend Belle.

Ulysses (@ulyssesthesissypitty) is a rescue dog that loves to snack. This Pitty has two cat brothers called Earnest and Oscar. The trio live in Rhode Island. With beautiful, big ears, Ulysses is a handsome pup with nearly 13,000 followers.

Pollywaffle (@pollywafflesworld) is a deaf rescue pup that is based in Sydney. Polly has two standout features: her big Cheshire smile and pink spotted belly. Polly’s infectious smile brightens the day of her 20,600 followers.

It’s time to feature some adorable rescue dogs. Luna, Zorro and Kenai (@lunazorrolife) are three Romanian Rescue Dogs that enjoy a raw fed diet. Zorro has been awarded Britain’s smiliest dog and it’s easy to see why! Fancy a smile? Follow these adorable dogs along with 24,000 others.

Next up we’ve got two ridiculously good looking rescue pups living their best life in North Carolina. Diesel and Reggie (@love.a.bull_diesel) are canines with a sense of style. They’ve got two bunny siblings that they like to pose next to.

It’s time to meet Hattie (@pupnamedhattie). This rescue pup is a sassy canine customer who likes to take long naps. You can find Hattie exploring live in New York City. With beautiful green eyes and striking markings, Hattie deserves her title as a southern belle.

Akira (@akirablackpit) is a rehomed pup that loves life and food. That’s a motto we love! Akira is the best at kickies and waves. This Amstaff mix has a beautiful black coat with white markings and warm brown eyes. It’s little surprise Akira has amassed a following of over 63,000.

Next up we’ve got Lilybug (@lilybug_lpb) aka Bug. Her mom jokingly described Lilybug as a velvet land Manatee. Lilybug loves to dish out hugs in New York City when she’s not creating content for her TikTok followers.

Mo (@mothescreamingstaffy) is described as the voice of four Bully breeds. He’s the self-proclaimed Scream King and has an insatiable appetite, hence being nicknamed the bottomless Pit. Wondering his mix? His witty bio writes that he’s 100% American Staffy and M0-lociraptor.

Baloo (@bully.baloo) is the bunny eared Bully. Rescued by Bella, Baloo is forever loved. He’s got a few different titles: Chewer of feet, destroyer of toys, breaker of stereotypes. Having been featured in Vogue and GQ, it’s little surprise he’s got 152,000 followers. You can read our interview with Baloo here.

Picklet (@lifeofpicklet) is an Australian pup that was rescued from the pound. No longer on death row, Picklet has released a book. This pup is a rescue advocate and ambassadog. You can follow his adventures along with 168,000 other fans via his Instagram page.

Wesley (@wesleythechickennugget) is 50% Pitbull, 50% chicken nugget and 100% good boy. Rescued in 2017, you can find Wesley cuddling his kitty sibling as the pair love to nap together. This three-year old is only 25,000 followers away from the 200k milestone.

Noah and Lincoln (@noah_and_lincoln) want to change hearts and minds about Pitbulls. These two rescue dogs are looking to break stereotypes, having been featured on The Dodo, 9GAG and more. Noah is the older sibling at the ripe age of nine, while Lincoln is a three year old.

Knight and Aston (@knight_thepit) are two rescue dogs with 192,000 followers. Aston is a five-year female and Knight is a four year old. Together, they make a duo of smiling dogs that will brighten your Instagram feed.

Bronson (@_bronsonthebully) is a three-year old American Bully. He’s cuddly, loving and a goofy sack of potatoes. He’s a rescue pup with an eye for fashion given he’s got an apparel line for his dedicated followers. Bronson has 221,000 followers on Instagram.

Next up we’ve got Tatum (@hi.this.is.tatum). Tatum apparently has 43 nicknames and a broken tail. This rescue put is based in Maine. This handsome boy is currently competing to win the title of America’s favourite pet.

Lee Asher (@theasherhouse) describes himself on his Instagram bio as an unfiltered guy travelling full-time in a Skoolie with 10 rescue dogs. Lee’s mission is to promote adoption and giving dogs a second chance to live their best life. You can follow Lee on his quest along with over 407,000 followers.

Candice (@roofusandkilo) runs a farm of misfits. She rescue dogs and fosters dogs. As a rescue advocate, her mission is to promote care for dogs who need a second chance in life. In doing so, she hopes to make her 420,000 followers smile.

Finally we’ve got Steve Greig (@wolfgang2242). Steve lives his life with senior dog rescues. His pack includes Bikini the Pig, Betty the Chicken and Tofu the Turkey. With over 1 million followers, Steve’s got one of the biggest and most popular rescue accounts on Instagram.