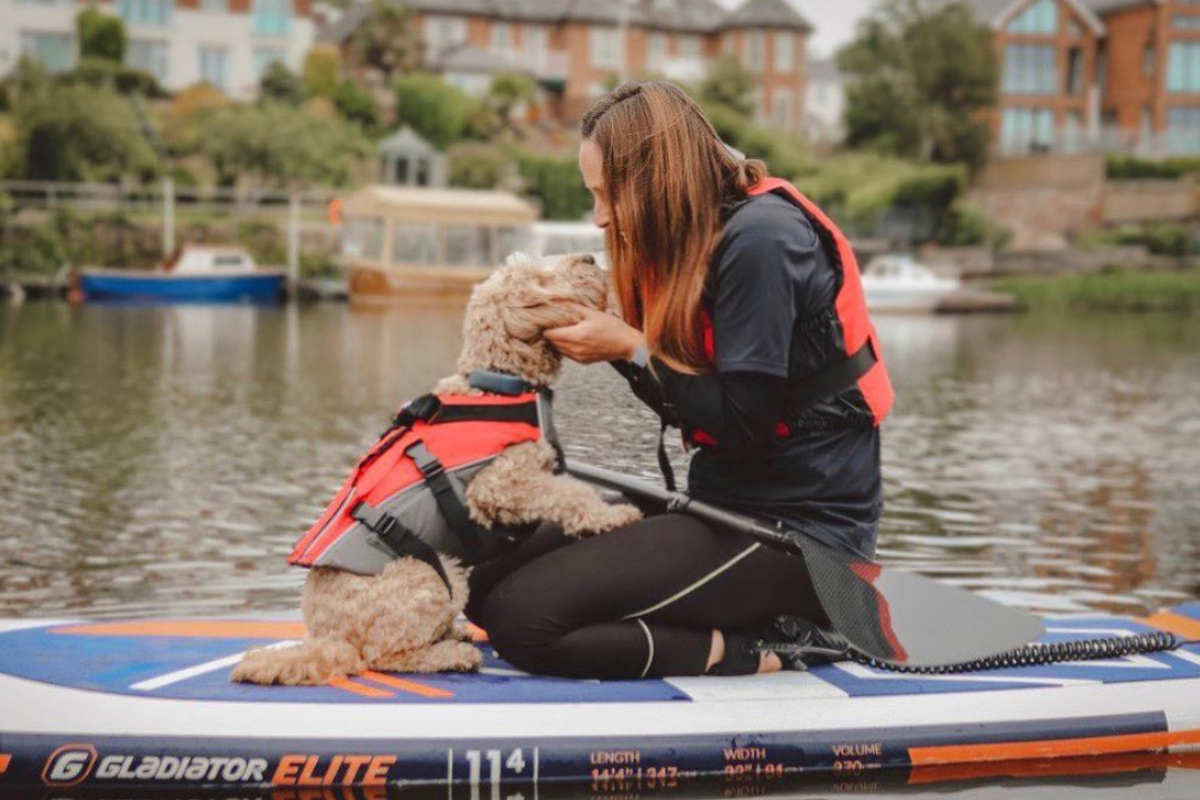 Reggie is a Cockapoo who loves getting wet.

This UK-based Cockapoo is an advocate for paddle boarding with pets (you can find out more about this on @suppupofficial).

When Reggie isn’t paddle boarding with mum, this Cocker Spaniel Poodle mix loves to go hiking in the British countryside.

If you love to explore with your canine companion, you’ll enjoy following Reggie’s adventures around the UK.

We spoke to Reggie’s mum to learn more about being a Cockapoo owner.

1) How did you hear about Cockapoos?

I met my first Cockapoo in a local park. It was the cutest and friendliest ball of fluff I’d ever seen. Since then I always wanted a Cockapoo of my own. Although, I had to wait a while.

2) What attracted you to Cockapoos?

Obviously, it had to be the cuteness of the “Teddy Bear” look.

3) Can you tell us how you ended up with Reggie?

I do not agree with puppy farms so after a while of looking for the perfect breeder, I then bought him as a puppy from Market Drayton in the UK.

4) How would you describe Reggie’s personality? 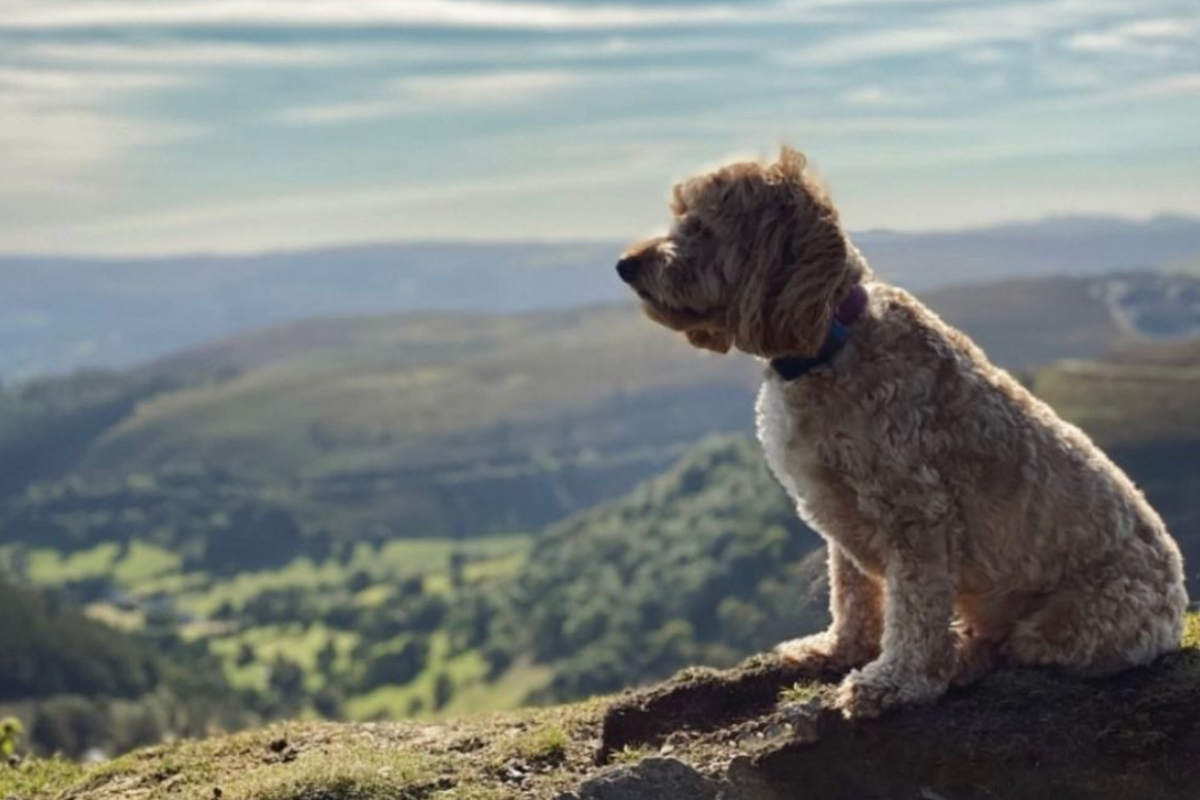 5) What are some of Reggie’s favourite activities?

Hiking in the hills and getting to run free like a loon.

Paddle boarding – We’ve been doing this for a while now and he loves its. As soon as the board is out he jumps straight on it before it’s even in the water. Sometimes he even has a little snooze on board.

6) Can you explain how you got Reggie accustomed to the longboard? 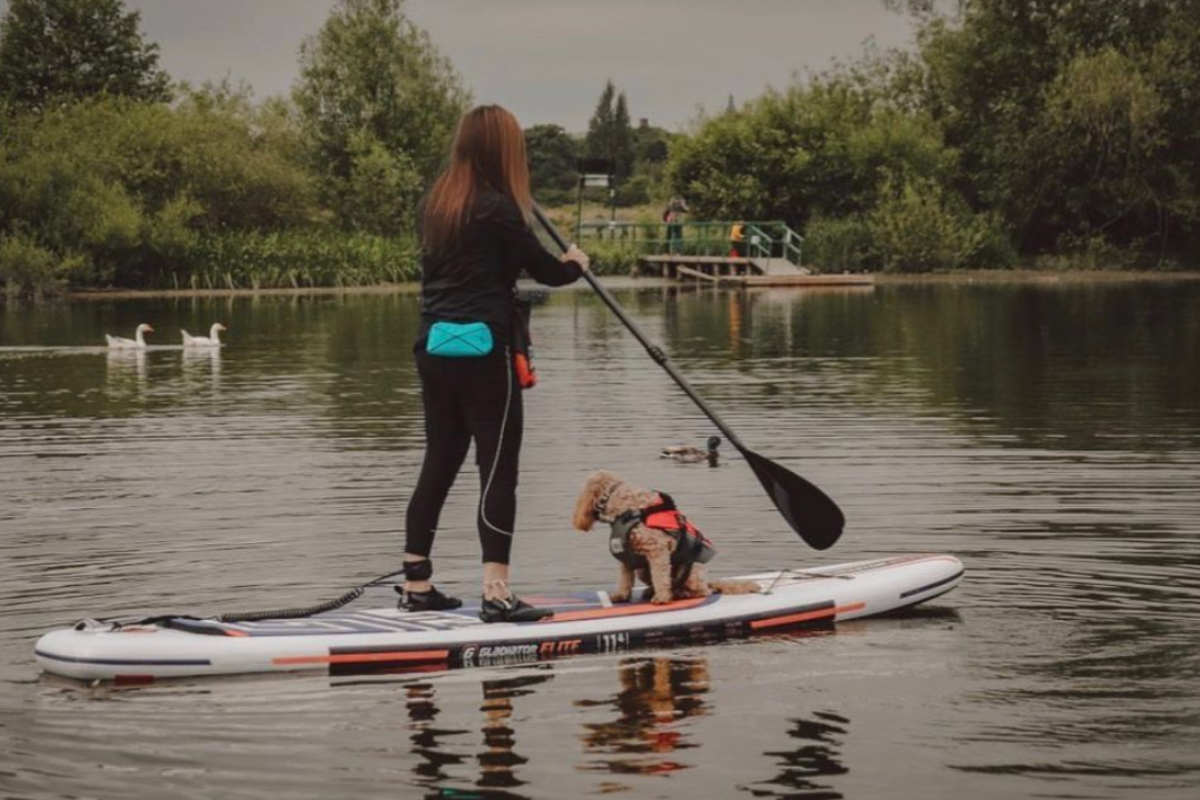 He was a natural and the first time he went out on it he just sat there. Some dogs just pick it up straight away.

I just love seeing other dogs on a board so I set up a page @suppupofficial for Paddle meet ups in the UK.

Cockapoos make excellent swimmers as they have spaniel in them.

8) What does an average day look like for Reggie? 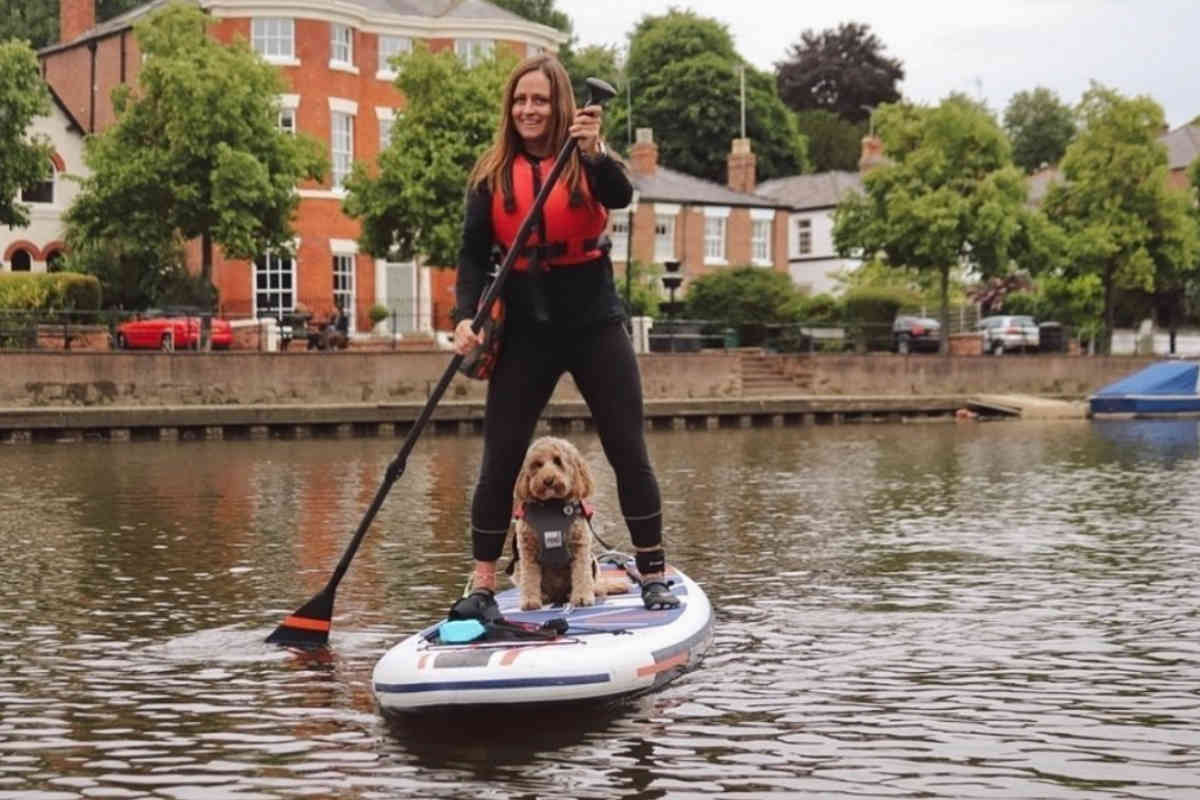 During the week Reggie will spend the day at daycare, however he sometimes gets to join me on occasional School Outdoor Educational trips, such as Duke of Edinburgh.

On my days off it’s a long walk in the hills or out on our board. In the evening he is very lazy, he does love his bed!

9) How did Reggie get involved in TV work?

Through the Agency Urban Paws. He’s available to hire for film, TV and media through them.

He also occasionally gets asked through instagram. (Keep your eyes peeled on the TV in the Spring!)

10) Do Cockapoos have separation anxiety?

Can’t say all do but from most it’s a yes.

Reggie does suffer from Seperation anxiety. He used to howl loud until I got home, hence him having to go into a daycare. I felt it wouldn’t be unfair on him to leave him at home.

11) Do Cockapoos need a lot of exercise? 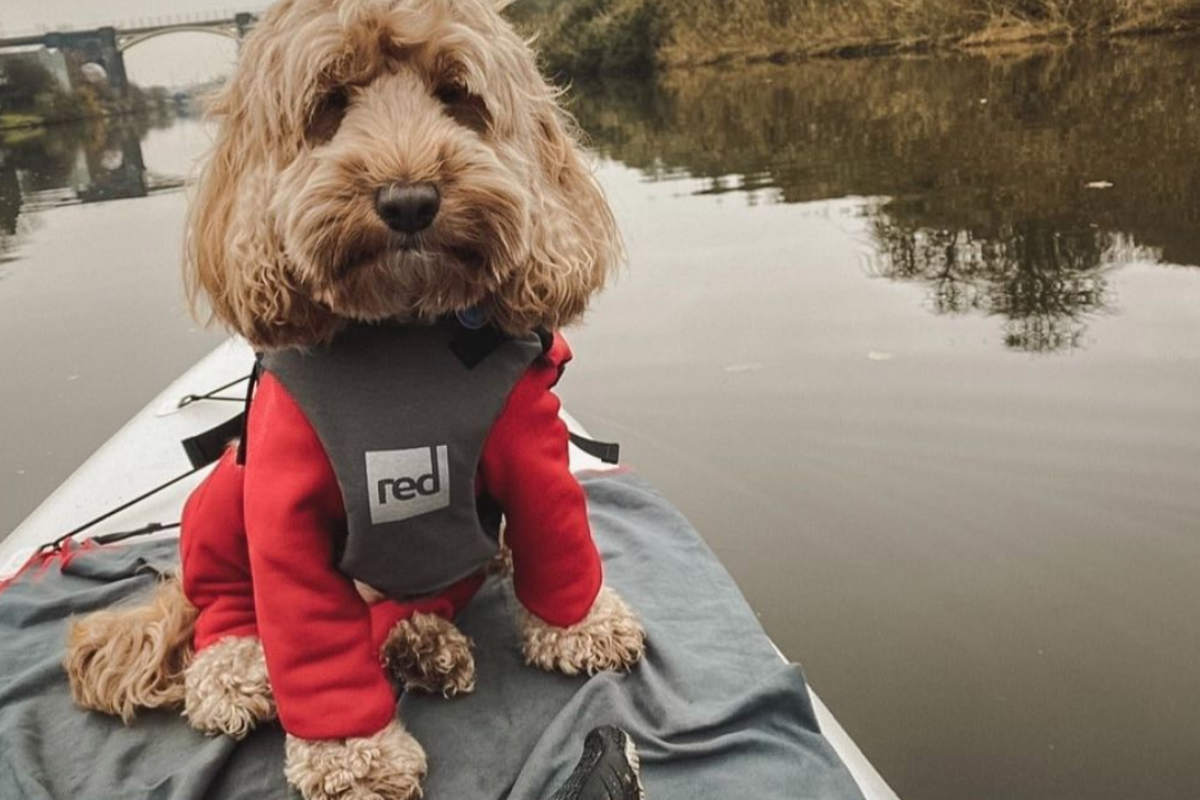 Definitely. They are very lively, bouncy characters. We could be out for hours and Reggie would still manage to get the “zoomies”.

I don’t know if I’m lucky with Reggie as he only barks if the door bell rings. From what I’ve seen outside, a lot of the barkers have been Cockapoos. They are known as a “vocal breed.”

13) Would you recommend Cockapoos to a first-time dog owner?

100% yes. I love everything about them and would have a house full of them if I could.

14) What comments or questions does Reggie get out and about?

“Where did you get his coat from?”

“Can I stroke your dog?”

“Where does he get groomed”.

My favourite memory has to be our week away in a Bumble Camper this year. We managed to paddle board, go to the beach, hike & eat out in dog friendly pubs. Reggie was loving life and so was I!

16) What other Cockapoo accounts would you recommend?

There are so many, we can’t name them all but here are my favourites: 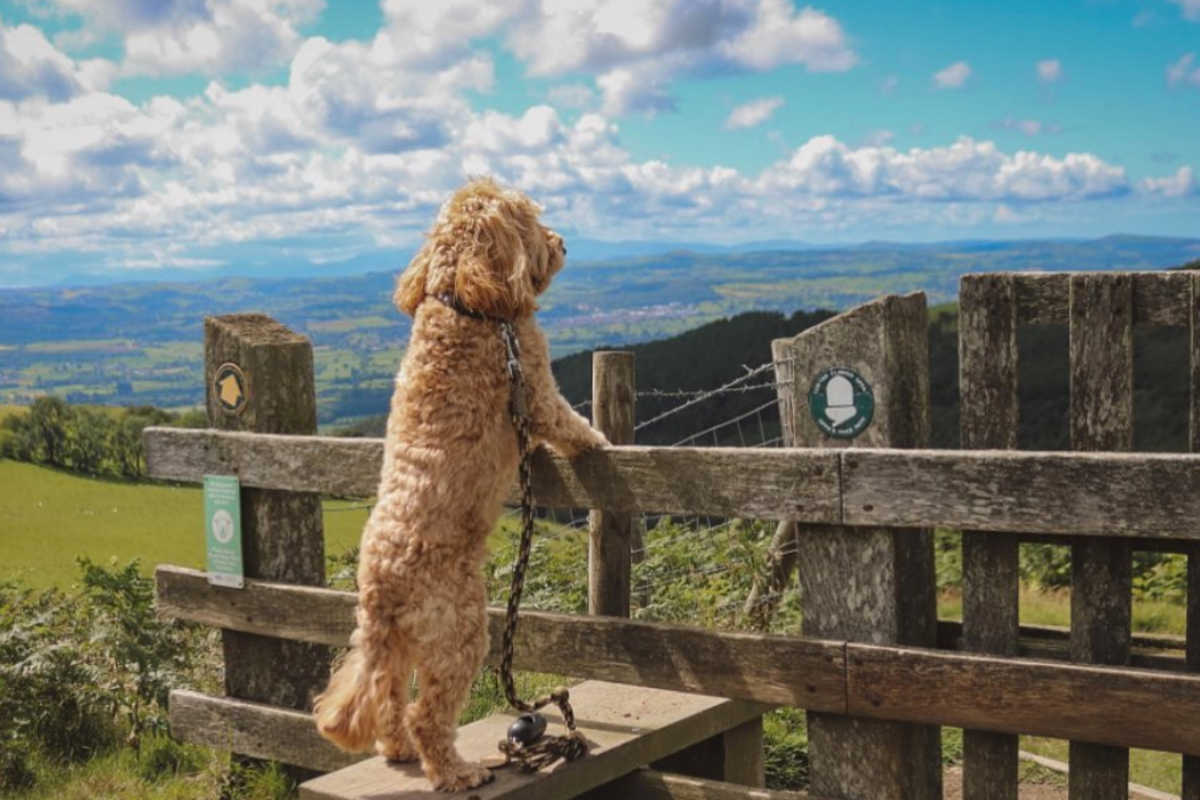 • Very little shedding – Although some do shed, most rarely do.

• Hypoallergenic – People with allergies are less likely to be allergic to them.

• Easy to train – They like to please & are very intelligent.

• Hair matts easily – Cockapoos Hair can Matt so easily, so they have to be brushed a lot more than other breeds.

• Separation anxiety – It’s a doodle thing. A lot of Doodles suffer with this.

• Looks – When buying a puppy you never know what they will really look like. They all seem to look that little bit different, even if they are from the same litter. They can also change colour. Reggie was a really dark Apricot colour until 2 years old & now he is really light.

• Lovers of mud – They absolutely love to get dirty or roll in fox poo.