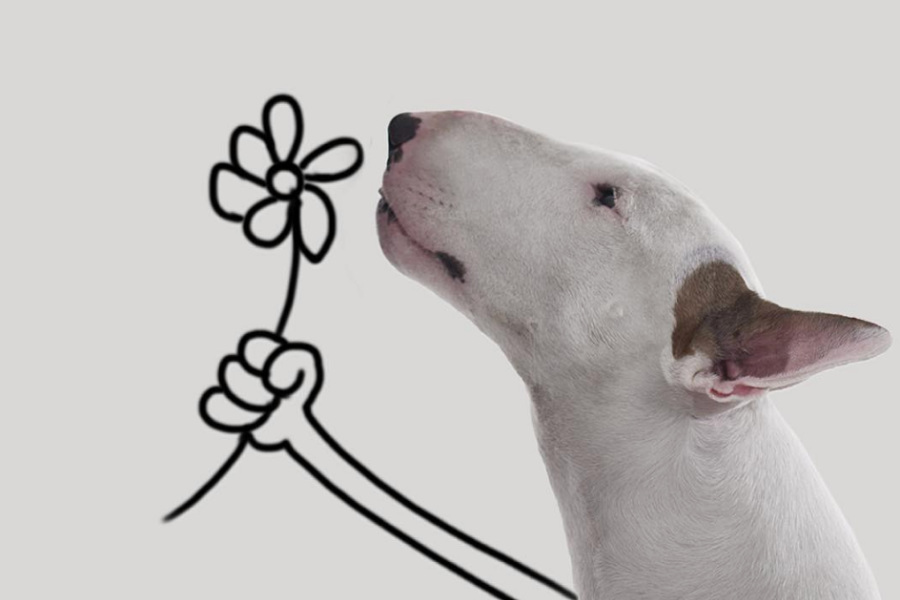 “I want Jimmy to be immortal.”

They’ve been through an incredible journey together: Rafael makes a living from their Instagram account having started the page when he was penniless.

On his 30th birthday, Rafael was divorced and bankrupt living in an empty apartment with cardboard boxes instead of furniture.

“It was a bad moment in my life,” Rafael tells hellobark.com.

“It felt awful. I didn’t have money to buy anything because my restaurant had gone bankrupt. I had no electricity or water. It was a complete mess. It was time to start my life again.”

Rafael’s ex-wife was responsible for the Instagram sensation’s name.

As a fashion designer with a passion for shoes, she aptly named their Bull Terrier puppy ‘Jimmy Choo’ three years before their divorce.

“All Jimmy’s brothers and sisters had X-Men names like Storm, Wolverine and Cyclops. Jimmy wasn’t a famous X-Men. He was named after a X-men character who was in a magazine years ago and never appeared again. My wife didn’t want the ugly name for her dog. I said, ‘OK, I picked the dog, you pick the name’. She picked the name of her favourite shoe brand: Jimmy Choo.” 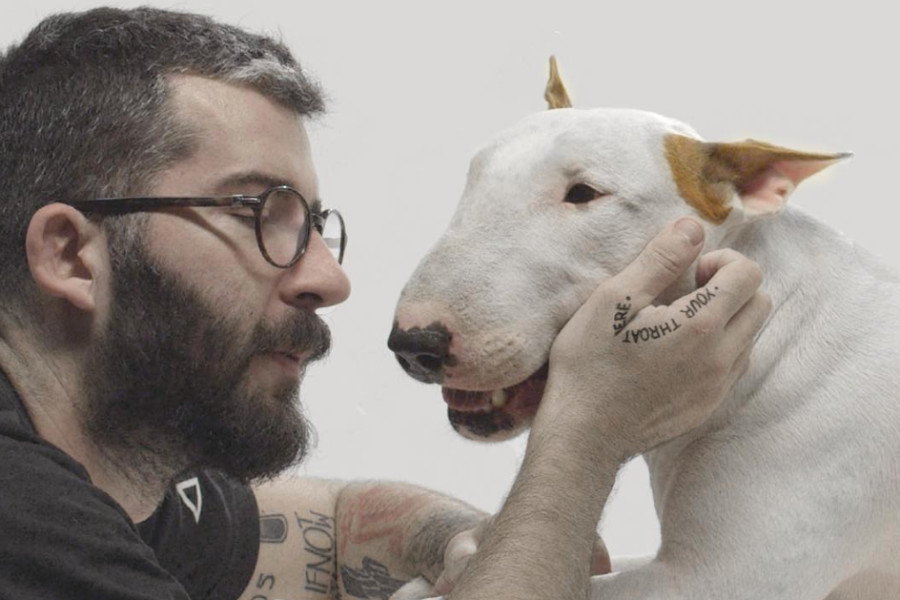 His artwork was easily relatable: whether it was recreating the famous Lady and the Tramp scene with Jimmy or sketching Jimmy into iconic movie posters such as Jaws.

It wasn’t long before Jimmy and Rafael went viral.

“I just had a white canvas, my dog and my imagination. The ideas started to appear in my mind. One day, the pictures of Jimmy on Instagram went viral and after that, my life changed completely.

It became my job because I started to get money. I was sleeping and overnight everything went viral. I woke up and I had 16,000 emails in my inbox.

“In the middle of all these emails, there was an invite from Jimmy Choo. There were four or five emails from book agents asking me to produce a book. The emails never stopped after that.” 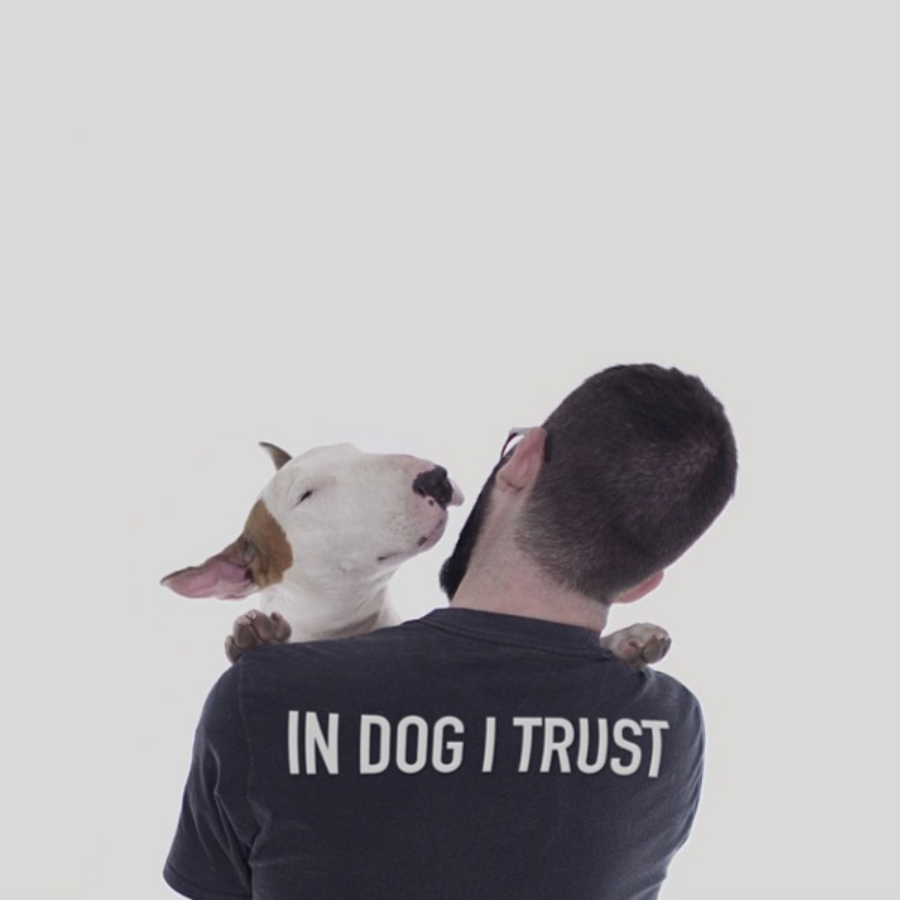 Five years later, Jimmy and Rafael have nearly 600,000 followers on Instagram. They’ve worked with huge brands such as Jimmy Choo, Porsche, Netflix and Coca-Cola. But Rafael still has his drive to be creative despite all their success so far.

“I’ve been doing this for five years. We did a lot of things: we did the Capsule collection with Jimmy Choo, we launched our book, we licensed products in more than 20 countries, we did advertising campaigns for brands like Porsche, Netflix, Coca-Cola, Doritos, Pepsi and lots more. Jimmy became my boss. I have the most amazing job in the world.” 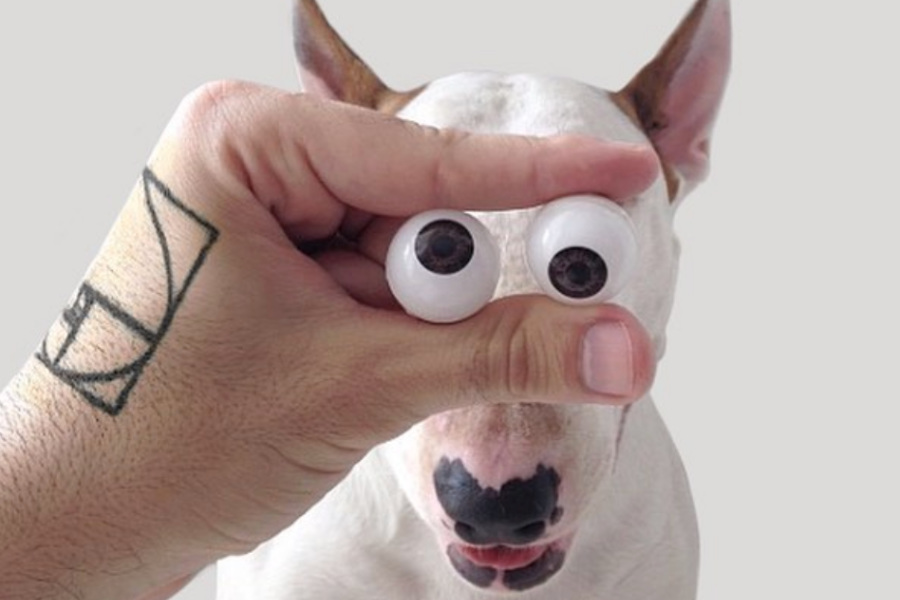 Rafael has Asperger’s Syndrome and Autism but Jimmy’s success has provided his owner with the chance to openly discuss his mental health problems and inspire others to speak up. He continues to use their platform to spread awareness about mental health topics as well as environmental causes.

“Jimmy is my hero – he has helped me to accept myself as an autistic person. He’s my best friend. Without Jimmy, I wouldn’t be able to create anything.

“I’m always behind him. He is the most important thing. He’s a shield. He is the way I found to express myself.

“One of the great things Jimmy’s success gave me is a close friend who is a psychiatrist in New Zealand. She contacted me because she had two Bull Terriers. She works with autistic children and she found my book and read that I’m Aspergers. She encouraged me to tell more people that I’m Aspergers. Jimmy has helped me to be open about my mental illness.”

Their success forced Rafael to step out of his comfort zone and into social situations that he didn’t feel comfortable in.

“This is the challenging part. I never know how to talk to people. I am very shy!

“I’m very happy when people come to talk to me about Jimmy. People used to avoid Jimmy on the streets. I was the guy who was always avoided. I’m not a social guy: I’m neat, I’m nerdy, I’m full of tattoos, I’m always wearing sunglasses and headphones. People had a bad impression of me but I’m not a bad guy, I just don’t know how to be social.”

However, Rafael has a renewed determination to increase awareness around Asperger’s Syndrome after being inspired by activist Greta Thunberg.

“My next mission is to do more things around this topic. Greta Thunberg is a global leader in climate crisis but she wasn’t afraid to say that she was diagnosed with Asperger’s Syndrome to inspire other men, women, girls and boys who struggle with their mental health.

“It’s important for people to say how they’re feeling and what struggles they’re facing. We need to encourage each other.” 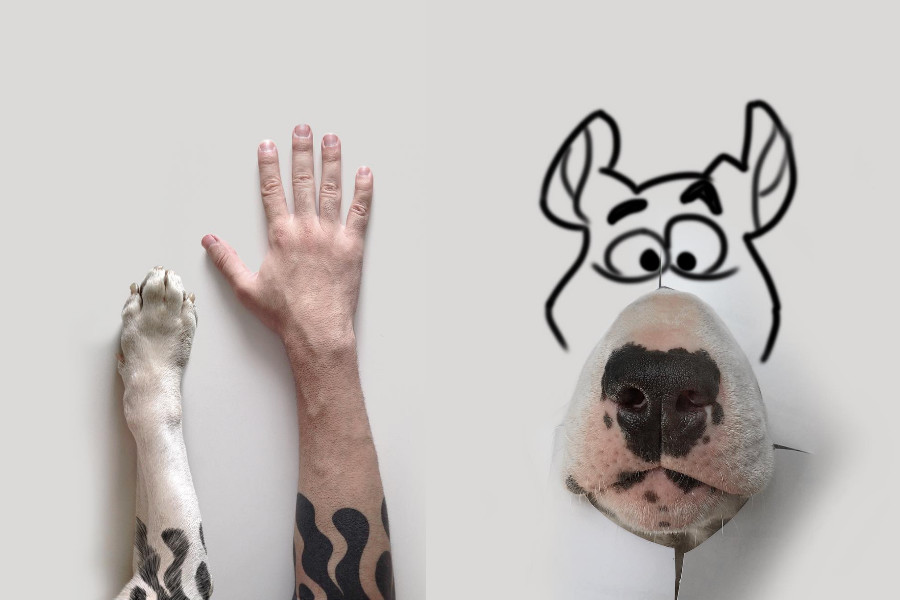 For a guy who says he isn’t social, his success with Jimmy has helped Rafael to make nearly 600,000 online friends across the world.

“I always get messages about how Jimmy’s photos make people feel a little happier for a couple of seconds every day. It makes me very proud because this is the reason I started the page. It’s not about money.

“It’s how my artwork can touch somebody on the other side of the world. It happened to me but it could happen to anyone. I always encourage everyone to express themselves, whether it’s a photo, artwork or music.

“You need to put your heart into what you’re doing and you’ll find people who can connect with you. You can change with other people around the world. No money can buy the experience I’ve had.”

In spite of all their success, Rafael talks about meeting Jimmy for the first time like it was yesterday. 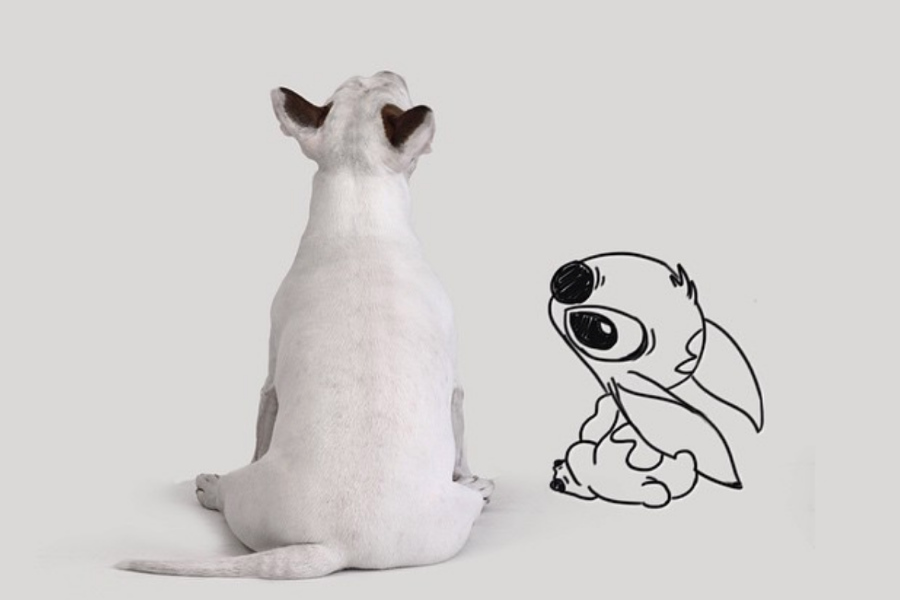 Although Jimmy was small for a Bull Terrier, Rafael was charmed by his crazy personality. Little did he know the crazy life they’d share together.

“Jimmy was the craziest one [of the litter]: he was the most energetic, biting everything and everyone. When I entered the room, he was the first one to come to me.

“The breeder told me Jimmy wouldn’t be the biggest. She suggested Jimmy’s brother because he was stronger. I told her I didn’t want the strongest or the perfect puppy but I wanted the crazy puppy – so I picked Jimmy!”

The breeder still calls Rafael every month to check up on Jimmy’s health. In that sense, Jimmy’s had a challenging year after undergoing two operations on his leg. Having leaned on his dog for help during his divorce, Rafael is now the one supporting Jimmy.

“It’s been a tough year for me but it’s been even more difficult year for Jimmy.

“It’s been difficult for him to get the confidence to put pressure on the leg. We need to educate him to walk again. It was a difficult process. He’s doing physiotherapy and he walks twice a week in a treadmill in water. He’s starting to get the muscle in his leg back. He is walking with more confidence. 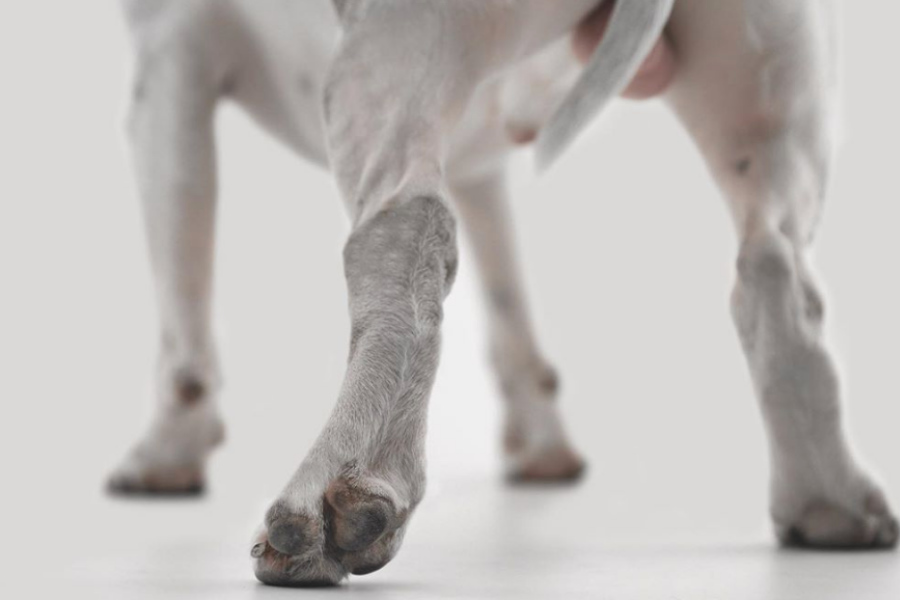 “A lot of things have changed. I have a two storey home and my bedroom is upstairs. Jimmy spends the day downstairs. I have to carry him upstairs and downstairs because he doesn’t know how to use the stairs. I have my bed on the floor and I have rubber floors to make his life a little easier. It’s the least I can do.”

Avid followers of Jimmy will know that Rafael has retired his Instagram famous dog from the white studio. He’s now focused on making animations to ensure Jimmy’s legacy continues long after his retirement. Rafael’s vision is to place Jimmy alongside other cartoon icons such as Garfield and Snoopy.

“Everything I’ve done with Jimmy was my voice and my point of view of the world but I wanted to figure out how to be Jimmy’s voice. I started to create the animations and the captions.

“I’ve no doubt that all dogs have a lot of things to teach us. They’re funnier than us, they’re smarter than us and he’s much cooler than me! I wanted to give Jimmy, who is the most important thing in my life, a voice. I wanted to make him immortal.

“I don’t know how many days, months or years Jimmy will stay with me. The real Jimmy. But I need Jimmy the character, the inspiration and the muse to be immortal.

I want Jimmy to live forever like Snoopy and Garfield. He’s immortal to me and I’ll never forget him.

In spite of the Instagram fame, the collaborations, the books and more, Rafael consider Jimmy’s greatest achievement to be transforming the image of Bull Terriers.

When Rafael got Jimmy in 2009, Bull Terriers were stigmatised in Brazil. People would cross the street or get out of the elevator to avoid being around Jimmy.

This is no longer the case. Jimmy’s fans ask to say hello, give him some attention or take a photo.

Bully is a bad word for people who had a bad experience in school. I lived this experience with Jimmy. At the start of the story, we suffered a lot of bullying. People would call Jimmy ugly.

“When Jimmy became famous, the opposite happened. People would cross the street to hug him, they’d take pictures of him. The word bully changed because now we’re talking about bullies in a good way. It’s the most amazing thing about this five-year journey. I helped to change how people see Bull Terriers a little bit. They don’t see Bull Terriers as evil or bad dogs like they saw five years ago.”

Jimmy may be approaching his tenth birthday but Rafael still plans to continue their incredible journey together by pursuing his passion.

“I still love to photograph my dog.” 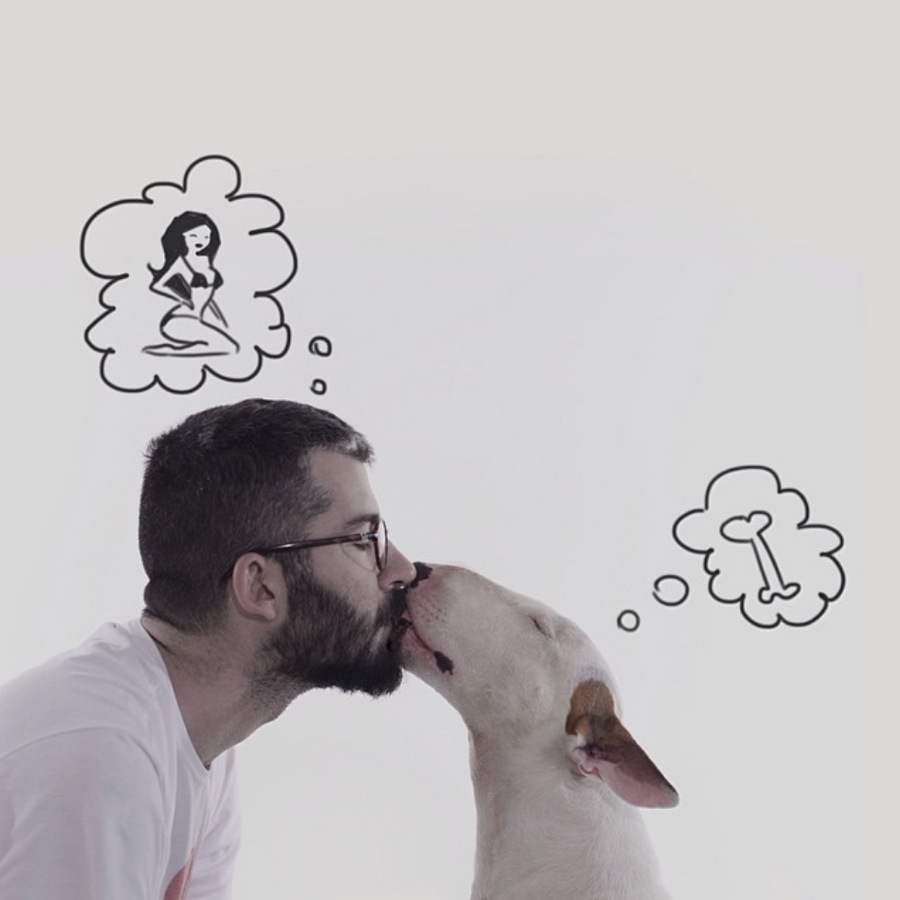