By Kieran Beckles
Updated on 15 October 2021

Have you seen the video of the Dachshund walking miles behind his owner and sausage dog pack on TikTok?

Well his name is Buster and he’s one of five Dachshunds owned by the Mother Of Sausage Dogs, Kate.

Buster and his fellow Doxies – Elvis, Aflie and Bella – have amassed a following of over 500,000 fans on TikTok.

Their success is in large part thanks to their many videos of Buster walking at a leisurely pace way behind his pack.

One of Buster’s videos has been viewed an incredible 22 million times with over 5 million likes.

We spoke to Kate to learn what life is like owning four Dachshunds and how Buster developed his charming habit.

This sausage is never late. Nor is he early. He arrives precisely when he means to 🌭

1) What attracted you to the Dachshund breed? 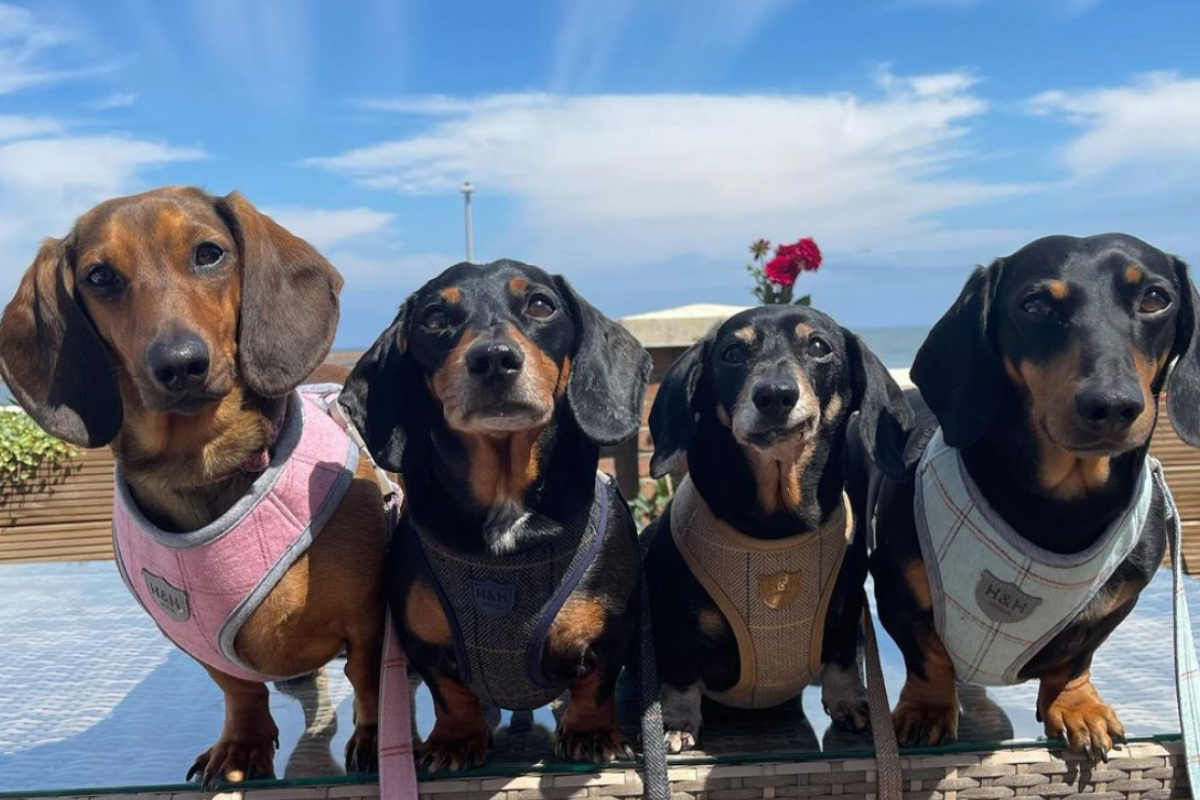 I grew up with Dachshunds since I was 9 years old. It was actually my Mam who liked them. My first dachshund Nell I got 20 years ago and then they were so uncommon we had to drive seven hours to find a breeder.

2) How did you end up with Elvis, Alfie, Buster and Bella?

I bought Alfie 13 years ago from Wales as we had another Dachshund who passed away a couple of years ago and wanted a pair. I rehomed Buster and Elvis from mutual friends. Elvis was five when I rehomed him. His previous owners said they did not have much time for him and he had been to several homes before me- he has bad separation anxiety and cried a lot in his previous homes which led to his other homes failing. Buster was eight when I rehomed him and he too had several homes before he found me. He was very aggressive when I got him which is why he was difficult to rehome. Bella I got as my dad lived down London and his neighbour died and their family were not dog people and didn’t want her and asked if we did as they knew we already had three Dachshunds.

3) Can you describe their individual personalities? 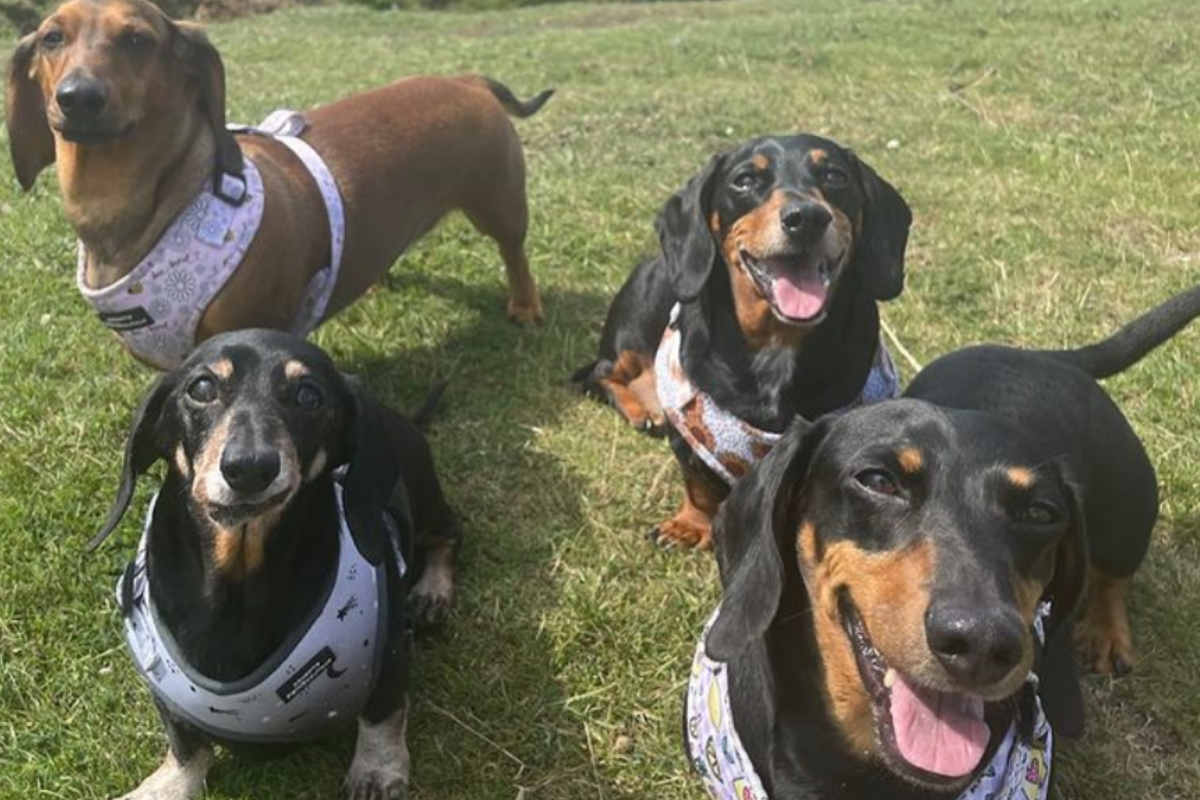 Elvis is a big softie. He is so clingy and loyal to me but he is literally the best behaved dog I’ve ever had he never does anything wrong and the others just torture him and he doesn’t bat an eyelid.

Bella is so crazy, hyper and playful. She has so much energy and never stops. She is very loving and snuggly. She rules the roost in our house.

Alfie is very grumpy but sweet, he is so vocal and demanding. He definitely has a god complex and thinks we are his slaves.

Alfie never ever licks us and doesn’t like being fussed with. He is so funny and complex and has lots of set ways he likes doing stuff and he is definitely the loudest.

4) Do you think Dachshunds do better in a pack rather than as an only dog?

I think Dachshunds are better in a pack. I have never had any trouble introducing another dog into the house. They never really fight and are always snuggling together and they are all really well bonded.

5) What does day-to-day life look like for your sausage dog pack?

I work in a school so luckily I get a lot of time off to spend with them but usually I wake up and take them for a walk for fifteen minutes before work and when I get home we tend to go for a longer walk (hour) and on a weekend I take them to lots of new places for longer walks and day outs.

6) Has Buster always enjoyed his alone time on walks or is this a relatively new phenomenon? 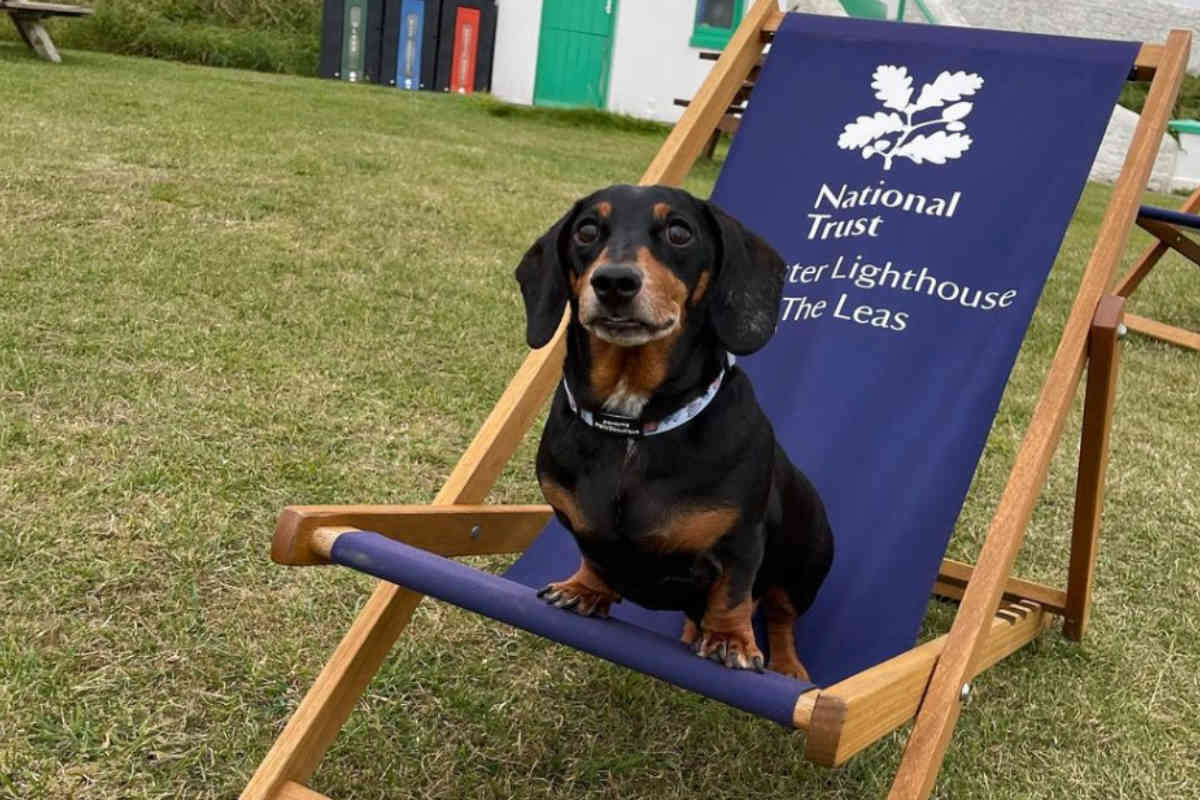 Buster from the Mother of Sausages pack (Photo: Motherofsausages/Instagram)

I rehomed Buster around three years ago and he has always walked miles behind us. At first I thought it might be a medical issue due to Dachshunds notoriously having mobility problems but I have had him checked many times and the vet confirmed he is just odd!

When I was out before a man approached me and was talking about him walking miles behind us and had brought up about dogs evolving from wolves and that they walk as a pack. He was saying the alpha walks behind to keep an eye on everyone and they do actually walk like that as wolves had the oldest at the front and the strongest in the middle.

I’d like to believe this is why he does it but he might just not want to be seen with us!

7) What do Elvis, Alfie and Bella make of Buster’s antics?

Alfie and Elvis don’t mind it but Bella gets so impatient with him she will often run back and nudge him to hurry but he takes no notice they are on Busters time.

8) How does it feel to see the social media community enjoy react so positively to Buster and all of your Dachshunds?

I am over the moon how everyone has reacted to Buster. I have a soft spot for Buster too as I know he has had a rough few years too (with being rehomed several times). When I first got him he was a different dog he was so nervous and hostile about everything – he wouldn’t let you pick him up, would hide under table and not come out and would refuse to walk. I wish I had filmed him from when I first got him to now to show how much he has come on so much these past few years and I feel he deserves all the positivity he gets from the social media community. He is such a happy loving dog now.

9) Do you have a favourite video of Buster since he’s become an Instagram/TikTok hit?

I love this video of him as I feel the song is the perfect tune that synchronises with his walking style.

10) What do people say when they meet your sausage dog pack?

People usually think I breed them when they see me with four and I’ve usually got them off lead so they always ask how I get them to walk next to me (apart from Buster miles behind). They never run off and will stop if I stop. I never really trained them to do this but they are quite antisocial with other dogs (except other sausage dogs) so never approach any other dogs or people. People often see Buster miles behind and assume he is lost but then see me with the other three waiting for him and laugh.

11) Is there a big Dachshund community in the north east?

Yes – they are so popular here I see them all the time. Before Covid, I’d been to a few sausage dog meets and at one they even have a sausage dog race ( Buster did not get entered).

TikTok! I spend a lot of time on TikTok – probably too much. I started my TikTok before my Instagram and as my TikTok started to grow I made an Instagram.

13) What advice would you give someone trying to create an Instagram/TikTok for their pet?

Go for it! I thoroughly enjoy making content and seeing animal content. Try to post everyday and look at other accounts and TikTok trends for inspiration. Instagram I feel has a better pet community and is easier to network with other accounts. I didn’t have an Instagram when I started Tiktok and my Instagram account has grew from my Tiktok following.

14) What’s your funniest or favourite story related to your dogs?

I have so many funny stories and traumatic ones. I can laugh about it now but when i first got Alfie he ran away on the beach and I couldn’t find him for twenty minutes and by this time I was in floods of tears and hysterical on beach and then I spotted him and this old man was feeding seagulls chips on the beach and there he was eating the chips off this old man. I ran over and just before I got to him a seagull had pecked him on the back and he jumped about 5 feet into the the air and I caught him – I see this as karma for him running away.

Another more embarrassing story is about Buster he was walking miles behind as he does and a little girl had ran over and was stroking and fussing him and as she was leaning over he snatched her ice cream out her hand and ran off, she was very upset but luckily her parents found it quite funny.

15) Finally, what advice would you give yourself if you could go back to when you first got your first Dachshund knowing what you know now?

Get good insurance! My first Dachshund suffered from IVDD twice and both operations cost around 5 grand each and at that time I had a basic insurance and they didn’t cover IVDD so I had to pay and once she had had it once insurance got very expensive and was hard to find cover. I recommend Bought By Many.

Also to have limited carpets in the house as they will not go out in the rain under any circumstances and will go in the house and it is raining alot in the UK so lesson learnt!