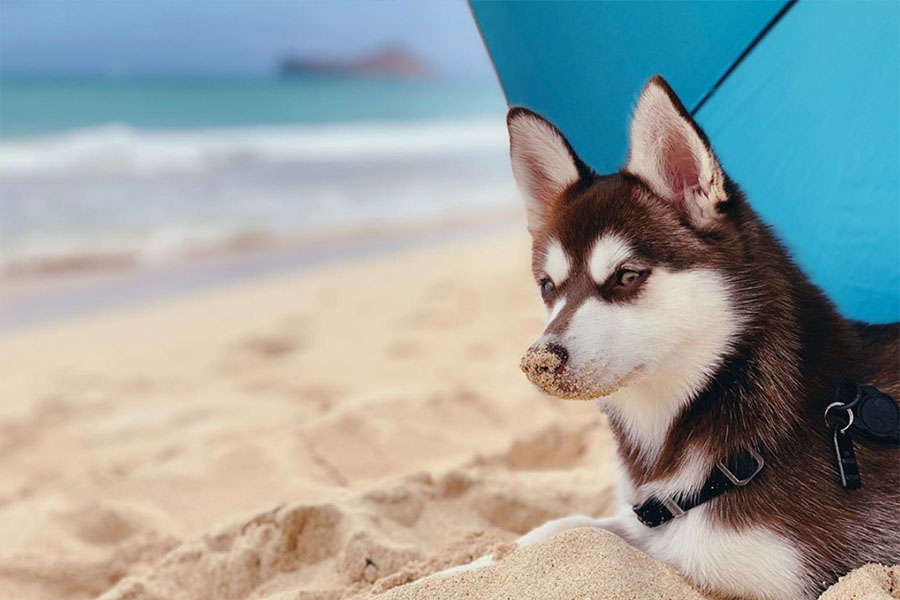 By helloBARK!
Updated on 27 January 2023
Exclusive

Koda is an Alaskan Klee Kai living on the Hawaii island of Oahu.

This red and white Alaskan Klee Kai can be regularly found running on the beautiful sand beaches of Oahu with her two “brothers”.

A self professed “wild wolf”, Koda complements Oahu’s natural beauty with her striking red and white coat with her gorgeous brown eyes.

With nearly 5,000 followers on Instagram, it’s easy to see why Koda (@meetkodapup) is such a popular pup on social media.

We spoke to Koda’s Mom Nicole to learn more about this nine-month old Alaskan Klee Kai who is fast earning celebrity status in Hawaii.

In this interview, we’ll learn about Koda’s personality and Nicole will answer some pertinent questions about Alaskan Klee Kai.

1) What attracted you to the Alaskan Klee Kai breed? 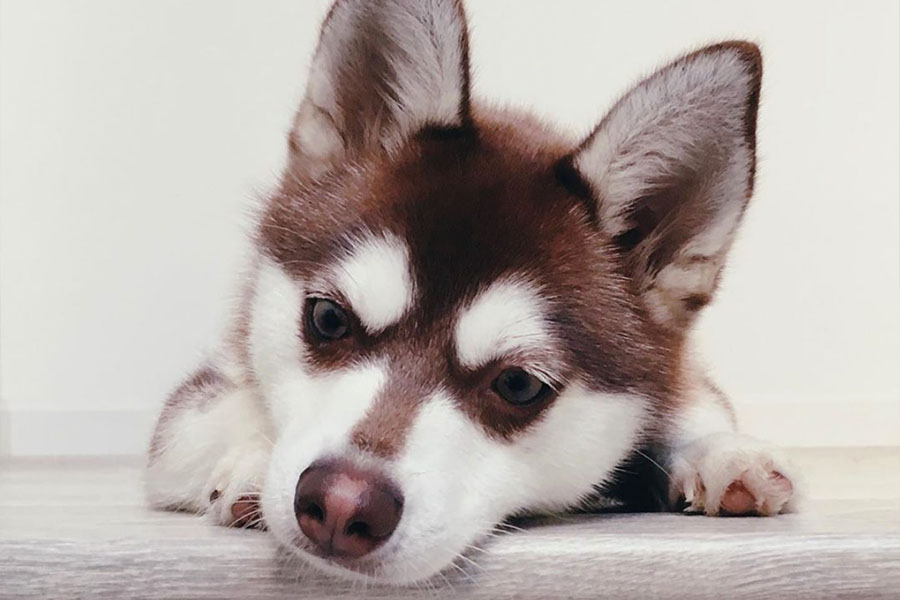 I first came across the breed while researching huskies. My sons had been asking for a “wolf or husky” for quite some time. I prefer small dogs so I looked for “small huskies” and eventually found the Klee Kai. The more I researched this special little breed, the more I fell in love. It’s true, they really are like huskies in tiny form.

Koda is stubborn and opinionated! Our little wolf knows exactly what she wants, and she tells us with a singsong howl-type sound when she’s frustrated about not getting it. She’s also very playful and has specific toys that she prefers. She adores other dogs, but only some people, and loves doggie daycare but refuses to let her guard down enough to ever nap while there!

3) What are the most challenging aspects of owning an AKK?

Koda is great about letting strangers pet her or other dogs come up to sniff her, but she wasn’t always that way. When she was younger, she was extremely uncomfortable with socializing. We went out of our way to expose her to social environments, including Puppy Play sessions at the pet store, to get her to come out of her shell. At first, she would cower in the corner and shake. Now, she initiates the play!

Another challenging aspect of owning a Klee Kai depends on how much you like making small talk with people. We can’t go anywhere with her without being stopped! People are so curious about what this tiny husky-looking dog is. I lost count of how many people on the street have asked to take a picture of her.

4) What’s your favourite memory with Koda so far?

Hands down, my favorite memory with Koda was the day I finally got to bring her home to meet the boys. My husband and I had been secretly planning and coordinating with the breeder for weeks about how we’d bring her home. Finally the day came just before Christmas, so we put together a holiday scavenger hunt for the kids with Koda waiting at the end under the tree! Their faces when they saw her were priceless. And our 8-week-old Koda couldn’t stop wagging her little tail!

5) Can you give an insight into Koda’s life in Hawaii?

Koda’s a spoiled pup who’s the center of attention in our home. At most, she’ll stay home alone for four hours while we’re at work, but we also send her to doggie daycare twice a week to allow her more time to socialize. On weeknights, she goes with the boys to soccer practice where she’s become a bit of a team mascot. And on weekends, the lucky girl comes with us to the beach or out on adventures along Oahu’s windward hiking trails.

6) Does Koda need a lot of exercise?

Koda does need a lot of exercise, and she needs it in an open space because she’s fast as heck! Sometimes if we get the whole beach to ourselves, I’ll take her off her leash and let her run like wild alongside the boys. The kids come back panting, but she’s always raring to go again and doesn’t look the least bit tired! She also likes to reach top speed running laps in our backyard. She once tried running laps indoors but accidentally ran into a piece of furniture because of how fast she was going. I think she learned her lesson. We haven’t seen her do that again!

Everything I hear from other AKK owners is that yes, they do suffer with separation anxiety. But we never experienced that with Koda – even as young as eight weeks old when we left her in her crate for short trial runs. We believe this is because her breeder prides himself on crate training his pups right away.

8) What are Alaskan Klee Kai like as family pets? 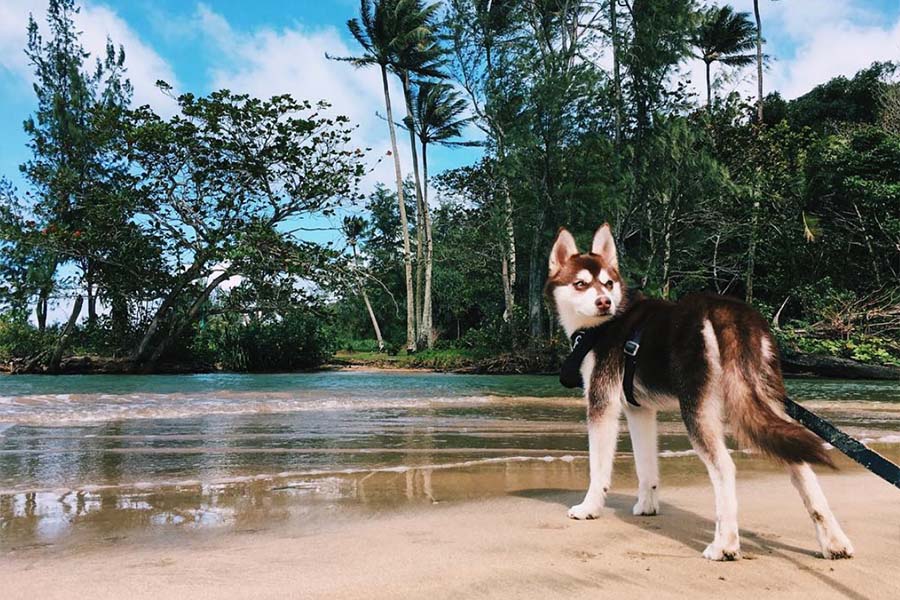 It’s true when people say Klee Kai are more like cats than dogs. They set their own agenda, or at least try to. They don’t bark, but they definitely speak. And if they’re feeling really passionate about something, they howl. They’re not exactly guard dogs. Koda barely bats an eye at new people entering our home. They’re fast learners and relatively clean. And you can’t help but fall in love with them!

9) Are there many Alaskan Klee Kai in Hawaii?

They’re not common in Hawaii, but there is a proud, small number of us. We’re connected with each other in a group on Instagram and also just started a Facebook group called Klee Kai of Hawaii that I’m hoping to use to network with and find other local AKK families.

10) What advice would you give to someone thinking about an Alaskan Klee Kai as a pet?

I think it’s very important that you do your research before bringing home an Alaskan Klee Kai. Yes, they’re insanely adorable. But they’re not like most dogs. Their personalities are quite strong, they need space to run, and they need effort put into socializing them so they don’t become skittish.

11) Why did you start an Instagram page for Koda?

I started Koda’s Instagram page (@meetkodapup) because my sister’s Aussie has a page (@naiya_the_pupster) that she uses to get her personal puppy post fixes out of her system. I liked the idea and decided to do the same. I had no idea it would grow into what it’s become, but I love the new network of dog loving friends that it’s introduced me to! 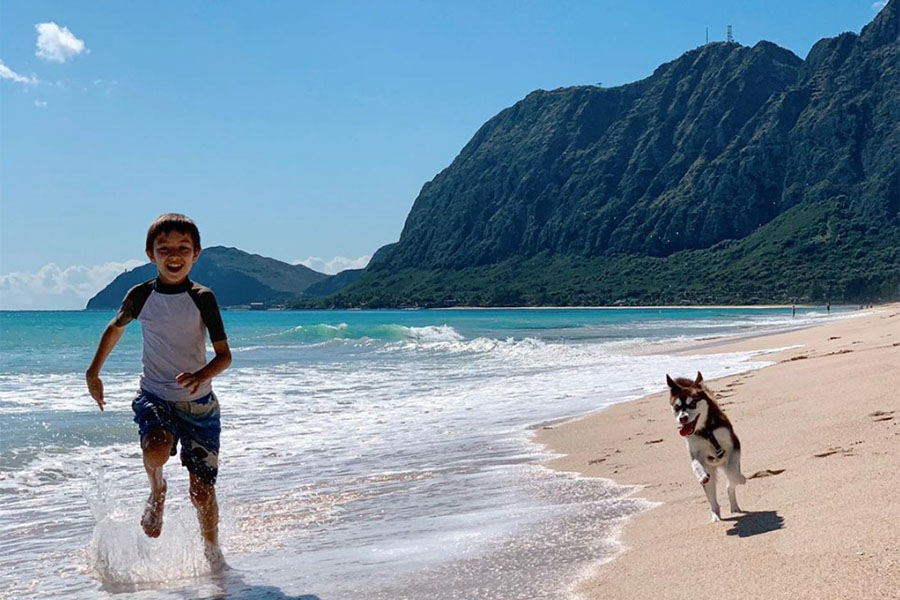 My favorite post is the one with my youngest boy running along side Koda at Waimanalo Beach. It was one of those perfect days where I could take her off her leash and let them race. She won by a lot and had plenty of energy to spare.

13) How much time do you spend building your Instagram?

For about a month, I was spending a lot of time growing it. I sought out popular pups to interact with and joined open engagement circles. I published a new post every morning. Now I’ve settled into a nice, more comfortable routine with a post every other day. I also have more meaningful circles of similar minded dog lovers and small businesses that I’ve really come to enjoy interacting with and supporting.

14) What Alaskan Klee Kai accounts would you recommend?

I follow back every Klee Kai that follows Koda! But here are a few with a unique voice that stand out

@myymakesmyday – Talk about glossy! This AKK’s adventures look like a magazine spread.

@myloveonpaws – She has the most beautiful pictures with a calming vibe.

@kobikleekai – This account is always good for a laugh.

• They really do look like puppies and will always be much smaller than huskies.

• They’re relatively quiet. Yes they talk, but they don’t bark or yip incessantly. They also don’t bark at unusual sounds.

• They’re low maintenance when it comes to grooming. Just be sure to brush them regularly to reduce shedding around the house.

• They require dedication to help them become comfortable socializing with other dogs and people.

• Because they’re so smart, they’re also true escape artists. We’ve built some serious barricades to keep her in particular portions of our house while we’re away, only to find that she’s on the other side when we get home!

• You will not be able to walk your dog without having to answer many questions about Klee Kai and possibly allow her to pose for pics with people you don’t know. The breed is not common, but looks like a tiny version of the popular husky, so people can’t help but ask about it!