By helloBARK!
Updated on 6 January 2023
Exclusive

What do you get if you cross a German Shepherd with a Belgian Malinois? The answer is a Malinois X.

This mix is uncommon so odds are you’ve come hear to learn a little more about them from an experienced owner.

They can go by a variety of different names, including German Malinois and Shepinois.

We wanted to learn more about this fascinating cross so we reached out to Jacali (@jacalidog) on Instagram.

1) How did your first hear about the Belgian Malinois / GSD mix?

I was very familiar with German Shepherds since I grew up with one that we’d adopted and I only knew of the Belgian Malinois. I didn’t go in search of this mix specifically though, and would never buy from a breeder. I was always browsing GSD rescues and the local animal shelters.

2) What attracted you to the mix?

I received word from someone in my area who knew of someone who needed to find homes for some GSD x Malinois pups. I never thought about getting a mix, but I’m not one of those people who care for “pure-bred” or “pedigree” dogs (just look at what they did to the GSD’s hips and hind legs from over and in-breeding… shame). In my eyes, a mixed dog is as valuable as any other dog, and seeing as the mix of these two breeds could make an overall healthier dog, I was inclined to take one in.

3) How did you end up with Jacali?

I got Jacali from someone in my area who had a female GSD and a male Malinois and had an accidental litter.

Jacali is such an outgoing dog. She loves people and dogs, and gets excited quite easily. She is very quick-witted and is sharp as a tack, so I always have to be one step ahead of her, but with constant training, she responds well to commands and corrections.

5) Can you identify GSD and Malinois traits?

The GSD is a very loyal and reserved dog. They are observant and protective of their home and people, and can easily spot when something isn’t right. The Belgian Malinois is very smart and attentive, and are instinctively protective as well. Both require lots of training, because they are working dogs, so they need to have a job or fulfill a duty.

With both the GSD and the Malinois being the top choice for police and military work, the mix of the two make a strong-minded dog that is naturally protective. However, despite the breed(s), each individual dog varies in personality.

7) Have you considered getting a second GSD x Malinois?

I play around with the idea, but I would never go out of my way to find a specific breed from a breeder. There are many GSD and Malinois rescues and many that need rehoming, especially since these dogs require structure and strict training and some people get them without properly educating themselves on how to raise a dog, let alone a highly intelligent, high-energy dog.

8) Are there any misconceptions you’d like to debunk about GSD x Malinois?

I believe many people think just because these dogs are known to be extremely smart and can be seen doing many tasks, such as police and military work, they don’t have to train them as much because they’re already smart. This is not true, in fact they require a lot of training to reach and maintain that level of obedience and receptiveness. Leaving them, or any kind of dog, in a backyard thinking they’ll run around and get their exercise is absolutely not effective, and they will not be properly exercised, because dogs need mental stimulation. They need interaction, and for you to tell them what to do, whether it be to fetch, walk in a heel, tug on the toy, etc. To have a smart and obedient dog, you have to know how to train and interact with your dog, but also know the tools and methods needed to do this. Without proper training (and by training, I also mean yourself) you can end up with a fearful/aggressive dog with bad habits that were enabled by none other than yourself. Some wonderful trainers recommend watching on YouTube are: Tom Davis of Upstate Canine Academy, Jeff Gellman of Solid K9 Training, and Larry Krohn.

All dogs require a well-balanced diet that contains all the necessary nutrients in order to thrive, just like any animal including humans. Having worked in the dog food business, I’ve seen my fair share of “healthy dog food” that really is just a marketing technique. Animals bred and slaughtered for food are forced to live in sickening conditions, making it a breeding ground for disease and bacteria, not to mention the antibiotics and other chemicals they’re injected. Because of this I’ve steered away from meat-based dog foods, even raw, and choose to feed my dog Wild Earth brand dog food. This food exceeds other brands when it comes to clean ingredients and complete nutrients. People tend to think that dogs are exclusive meat eaters because they evolved from wolves, however they are classified under the same order as raccoons and giant pandas. Unlike true carnivores like cats and ferrets, dogs produce digestive enzymes that allow them to digest a wide variety of foods and utilize vitamins from plant sources efficiently. Scientific evidence shows that it doesn’t matter the protein comes from, as long as it’s complete, high-quality, easily digestible, and bio-available. Wild Earth dog food provides exactly this and more, including the 10 essential amino acids that dogs require. I also love that they include omega-3 fatty acids in their formula, because I used to have to supplement that. Jacali was always indifferent about her food, but loves Wild Earth food so much she would do tricks for it. I highly recommend this food to anyone who cares about their dog’s health, plus they are sustainable and environmentally friendly, unlike most other dog food brands.

10) Do GSD x Malinois require a lot of stimulation? 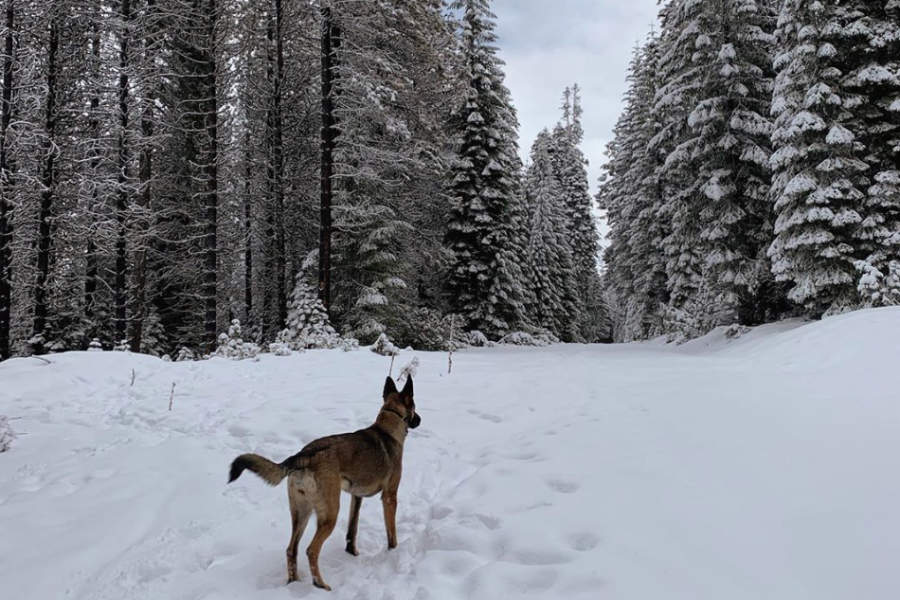 All intelligent dog breeds require a lot of stimulation, both mental and physical. This means switching it up and not being too repetitive too. With Jacali, I always use her meals as a reward, meaning I measure out her breakfast and I train her with it, using my hands to feed her like you would with treats. Then I let her chill out and give her time to digest her food, anywhere from 45 mins to an hour, then we either go out for a walk/play fetch/tug (all incorporated with obedience training) for about the same amount of time. When I leave for work, she sleeps. This can be anywhere from 4-6 hours. Then after I come home, I feed/train her again, then walk/play after. A few days a week we visit our friends who have dogs for her to socialize with, and sometimes she goes on the treadmill in 10 minute increments while I monitor her. This is for mental stimulation more so than physical, as she needs to focus on her pace (we usually go at a steady fast-walking pace). We will also play games such as searching for an object or a toy, and since we live close to the mountains we go hiking at least 3 times a week.

11) What comments/questions do you get when you’re out with Jacali?

Whenever I’m out with Jacali, people love commenting on her sleek appearance and her coat. Many people will say they recognize the breed as used by the military. She loves people and people seem to love her. There have been times where people have commented on her body, saying she is too skinny. Jacali inherited more of the Malinois looks, and they have a very slender figure (which is why they are more highly desired than the GSD in terms of high-agility work), and many people think she is a skinny GSD. I think most people tend to over feed their dogs (and not work them out enough) resulting in a rounder figure, and they think this is the norm. However, it’s healthy for dogs to have a slender waist and have their muscles show through.

12) Why did you start an Instagram page for Jacali?

arted an Instagram page for Jacali because I love taking photos, especially photos of her, and I needed a place where I could share them independent from my personal page because I found myself constantly sharing photos of her (not that there’s anything wrong with that, ha). I did it mostly for myself because I like to keep track of her growth and I realized there is a whole community of Malinois owners on Instagram and it’s wonderful to see a glimpse into each of their lives and exchange thoughts, ideas, and advice.

13) Do you relish the chance to educate your followers about the mix?

I do enjoy being able to educate people on this mix, especially the Malinois part, because they aren’t commonly known about, yet their breed requires a lot of knowledge and discipline (in yourself). Instagram is a great place for us owners to help each other out and learn from one another.

14) What are the pros and cons of having an Instagram page for your dog?

The pros of having an Instagram page for my dog are that I am able to share a lot of photos of her with her friends and followers and it is always welcomed. I love being able to interact with other people around the world who also have this mix and either one of the individual breeds, and sharing experiences with them. I always see a little bit of my dog in theirs, and that’s what makes it so special. I don’t believe are any cons to it, I’m not a serious Instagrammer and I don’t let it dictate my life (or hers); we just do it for fun and it’s been fun connecting with so many wonderful dog owners.

What other Belgian Malinois / GSD mix accounts would you recommend to our readers? 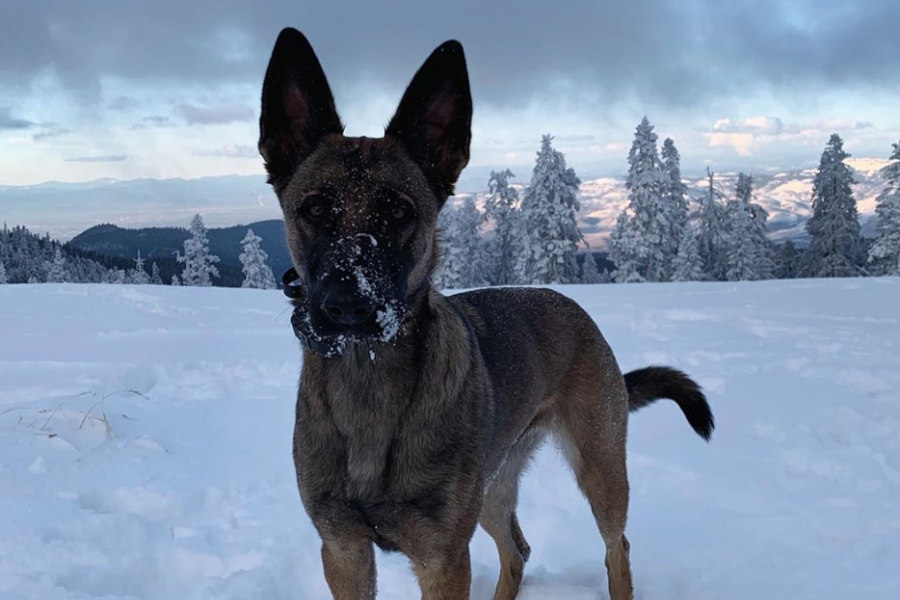