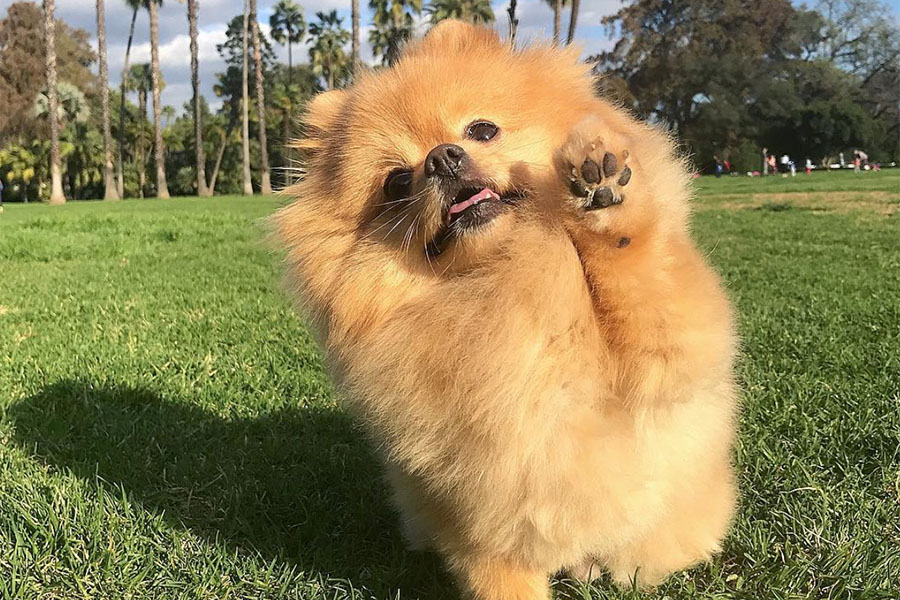 By helloBARK!
Updated on 11 August 2021
Exclusive

Chewie was rescued in China for the small sum of $35 while his parents were studying abroad.

The social media star was part of an unwanted group of dogs being sold for consumption (meat market).

Chewie was in a box with six white little dogs and his parents knew there was something special about him that they couldn’t walk away without this fluffy pup.

There was an instant bond with his parents that has become stronger in time. Chewie currently lives in Los Angeles, California.

We spoke to Chewie’s Mom to learn more about this chirpy Pomeranian with a special story.

1) How did you first hear about Pomeranians? 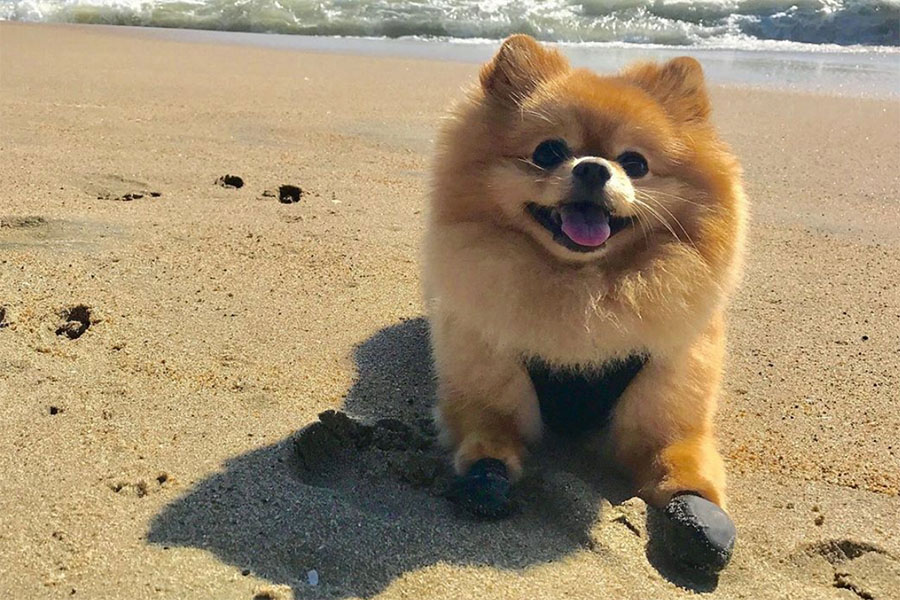 We heard of the breed as kids growing up. But since we never had dogs, we knew nothing about Pomeranians. Wasn’t until we brought him home with us and took him to the vet that they said he might be a Pomeranian…. But Chewie isn’t your typical Pomeranian.

They’re a little ball of fluff, what is there not to love about them?! They’re extremely smart and full of character. It wasn’t the breed that got us. There was something special about Chewie when we first laid eyes on him.

3) Has owning a Pomeranian lived up to your expectations?

Completely opposite from what we’ve learned online. I say this in a good way. Chewie has made us fall in love with the breed. Pomeranians are known to be yappy, aggressive and stubborn. Chewie is the complete opposite of all that. He has his own characteristics and makes us think a little boy is trapped inside this dog body. It’s weird, I KNOW!

4) Can you give an insight into Chewie’s personality? 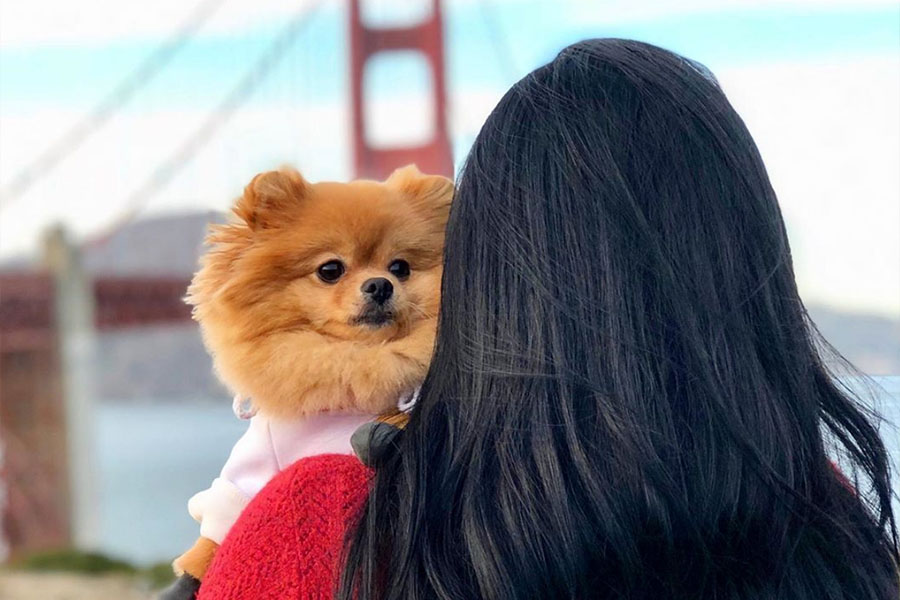 Chewie is the chillest dog you will ever meet. He is super friendly with everyone and loves kids. He doesn’t interact with other dogs. If a dog came up to him he would walk away. If he sees a bigger dog on the street, he would hide or run up to a human and asked to be held. He is extremely lazy and can sleep anywhere (cars, planes, in a movie theater, walking down the street in his backpack carrier) He can sleep through anything. He acts like a stuffed animal outside, but if you sit down on the floor at his level, he will bring you a toy and demand a game of fetch.

5) What are the challenges of owning a Pomeranian?

Shedding! It’s not as bad as some other breeds, but he does shed and we’ve just grown to accept that it’s okay to walk outside with dog hair on our black clothes sometimes. They’re prone to luxating patella (Dislocating of the knee cap). It’s very common in Pomeranians so maintaining a healthy weight and limiting from jumping is sometimes a challenge (luckily for us, the highest Chewie can jump from are curbs).

6) Are Pomeranians hard to potty train?

I’m not sure about Pomeranian breed in general. But Chewie got the pee pad training in 10 minutes. He has not had an accident in his entire life. When he needs to pee or poop, he does this bark and makes us walk with him to his pee pad. If we are not home, he won’t pee or poop. If we are outside and no pee pad is available, he is okay relieving himself outside as well.

7) In your experience, do Pomeranians suffer from separation anxiety?

We’ve seen and gotten to know other breeds throughout the years and I don’t think Poms are as bad with separation anxiety. Chewie is just very needy and clingy to me (mom). He will let anyone and everyone hold him, but after about 10 minutes or until he makes eye contact with me, he will cry for me to hold him. We think he marked me as his mom when he was a pup because I would have to syringe feed him since he was very tiny.

8) What other stereotypes do Pomeranians have and are they representative of the breed?

Poms are known to be yappy and will bark at everything and everyone. We can only speak for Chewie but he only barks when he needs something. We haven’t heard any other negative stereotypes. But just speaking from experiences with Chewie, he’s the best breed (bias).

9) If you could dispel one myth about Pomeranians, what would it be?

They shed A LOT. Chewie does shed, but if we are consistent with brushing him 2-3x/week, it’s not as bad as other breeds.

10) Do you think Pomeranians are a good option for first-time dog owners? 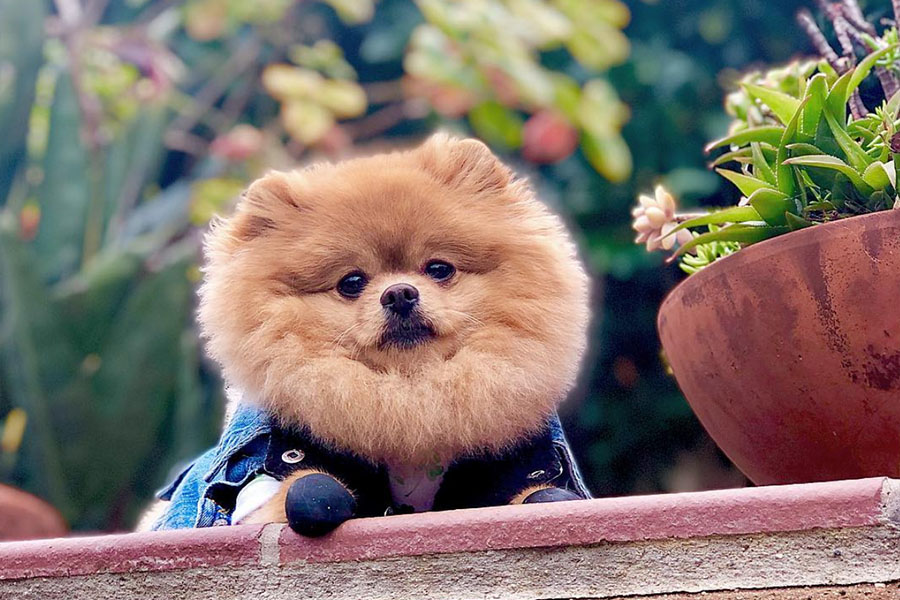 We are first-time dog owners and Chewie has taught us so much. We haven’t had experience with other breeds to say yes or no on this. But we can’t imagine life without a Pom (specifically a Chewie). I think with the right love, care, and bond any dog would be a good dog with first time owners. Having a dog is kind of like having a kid, you’re now responsible for a living and breathing thing. It requires a lot of work, so unless you’re ready to be a pawrent, you’re not ready for a dog.

11) Why did you decide to start an Instagram page for Chewie?

Chewie’s IG was started specifically for memories. Chewie’s dad and I use to post on our personal page and our friends got annoyed with double the feed of Chewie on their page. So they convinced us to open up his own IG. We are so glad we did, because now we can look back at all the memories we’ve had with him and all the adventures that he has been on with us.

12) How much time do you spend on your Instagram page?

Chewie’s IG page is managed between both parents. So not much time at all really. Between the two of us, we spend about 1-2 hrs a day total on IG reply back to comments/dm and catching up on the content that our friends posted on their page.

I couldn’t narrow this down to just one photo or post. There are too many!
We don’t have a favorite post. They’re all so different and special in its own way. It captured a fun moment of that day and tells a story about his day. His page was made to capture his daily life, so there are some days where he is out at an event, and other days when he’s at home sleeping in bed. They’re all so different.

14) What advice would you give to someone starting an Instagram page for their dog? 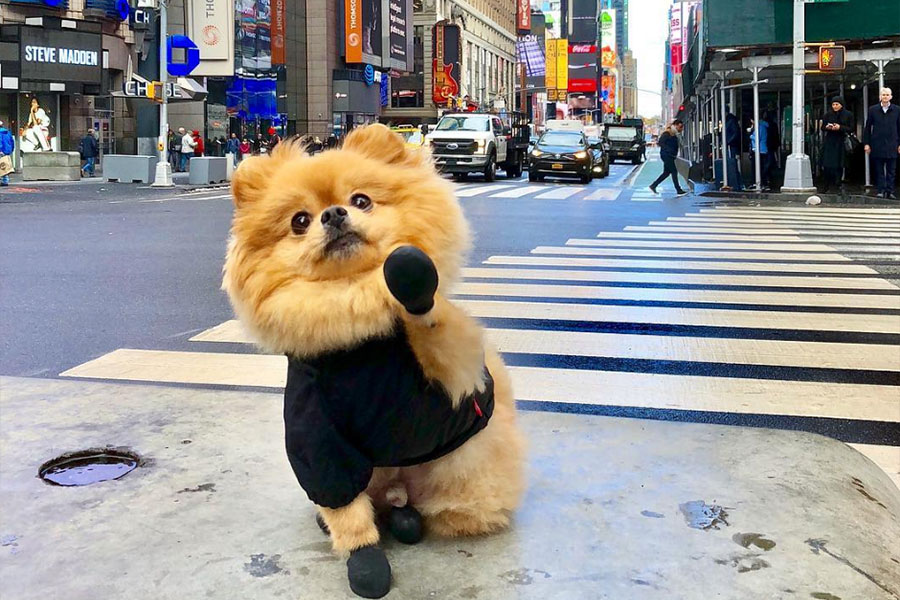 Just have fun with it. Post fun pictures that the world can relate to. At the end of the day it’s about the memories you’ve made and the people you’ve gotten to know and now call your friends.

15) What other Pomeranian accounts would you recommend?