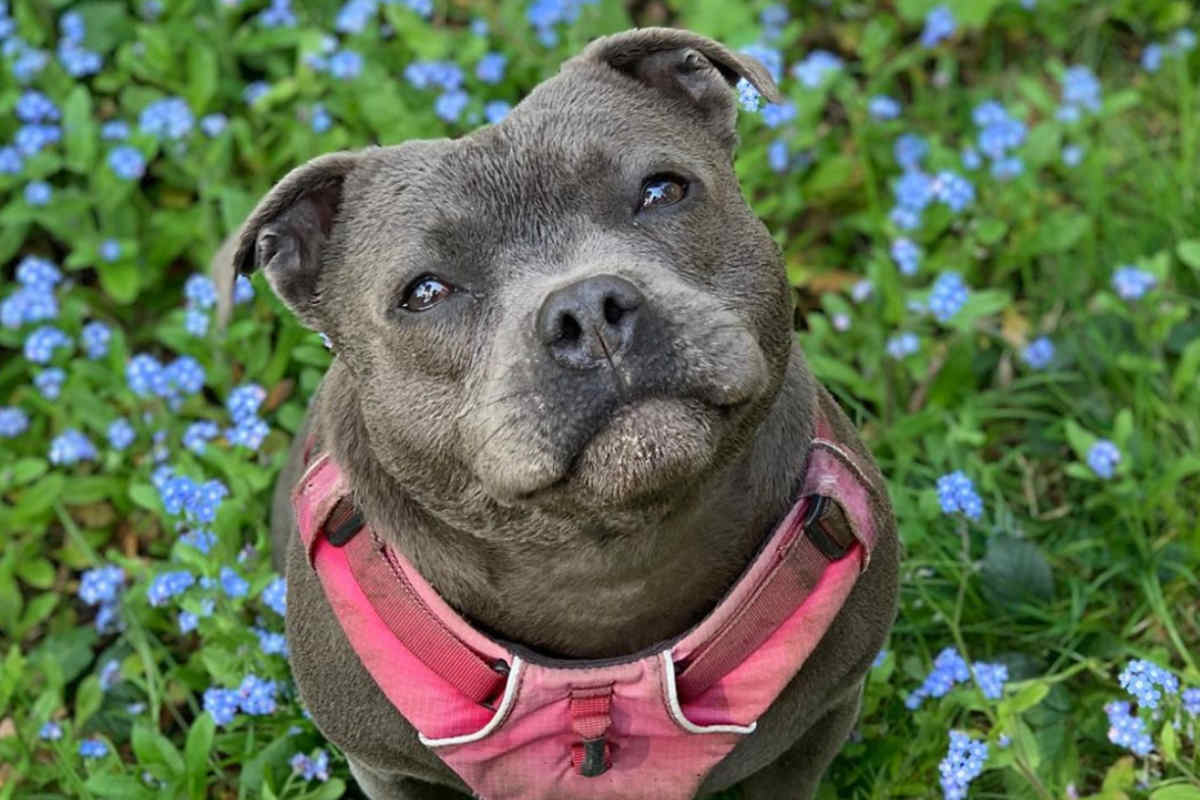 By helloBARK!
Updated on 6 January 2023
Exclusive

This ‘A-Dora-Bull’ Staffordshire Bull Terrier hit the headlines in 2016 when she chewed through her mom’s expensive new Louboutin heels.

Dora has since gone viral for her love of all things water, particularly her reaction to when she gets to go outside in hail or rain in the garden.

One of her videos has been viewed over 1 million times on video-sharing platform TikTok.

When Dora isn’t entertaining her 156,000 Instagram followers with her beautiful smile and natural good looks, you’ll find this Staffie bonding with her little brother Teddy.

As an advocate of the Staffordshire Bull Terrier breed, we wanted to speak to Dora’s mum Emma to learn more about Dora. 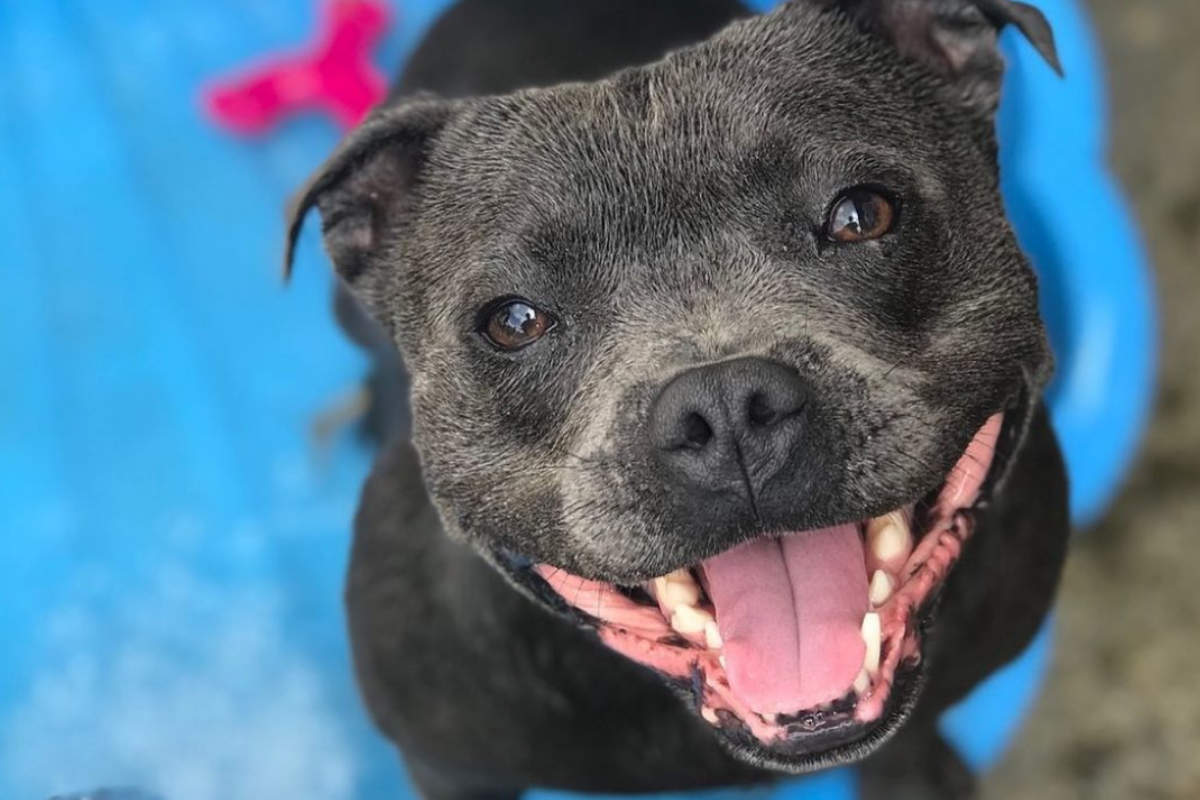 My previous Staffy called Havana was my baby for 12 years. She passed away and I swore I wouldn’t put myself through the pain of losing a dog again, but a few months later I felt a huge paw sized hole in my heart. It was awful coming home and not being greeted by a wet nose that loved you unconditionally so I knew I had to get another dog. Initially I thought of getting another breed such as French Bulldog or Spaniel as I was aware and had already lived through the sometimes negative perception people have of Staffies, but my heart kept coming back to Staffies. I know that they give their whole heart to you, they are the most loyal and loving breed you could ask for and so I began my search and found Dora. I didn’t want to get a Staffy through a breeder and I was unable to rescue so I found a litter from a pair of Staffies that I could go and see in their home and meet the parents. I nearly came home with two! Dora was the quiet one that just wanted to cuddle and I was smitten!

2) Had you owned dogs before Dora?

I have had dogs since the age of. Our first dog Kippy, who was a mongrel that we rescued, lived for 17 years. I then had friends who owned a Staffy and that’s when I fell in love with the breed and got my brindle girl Havana.

3) How would you describe Dora’s personality? 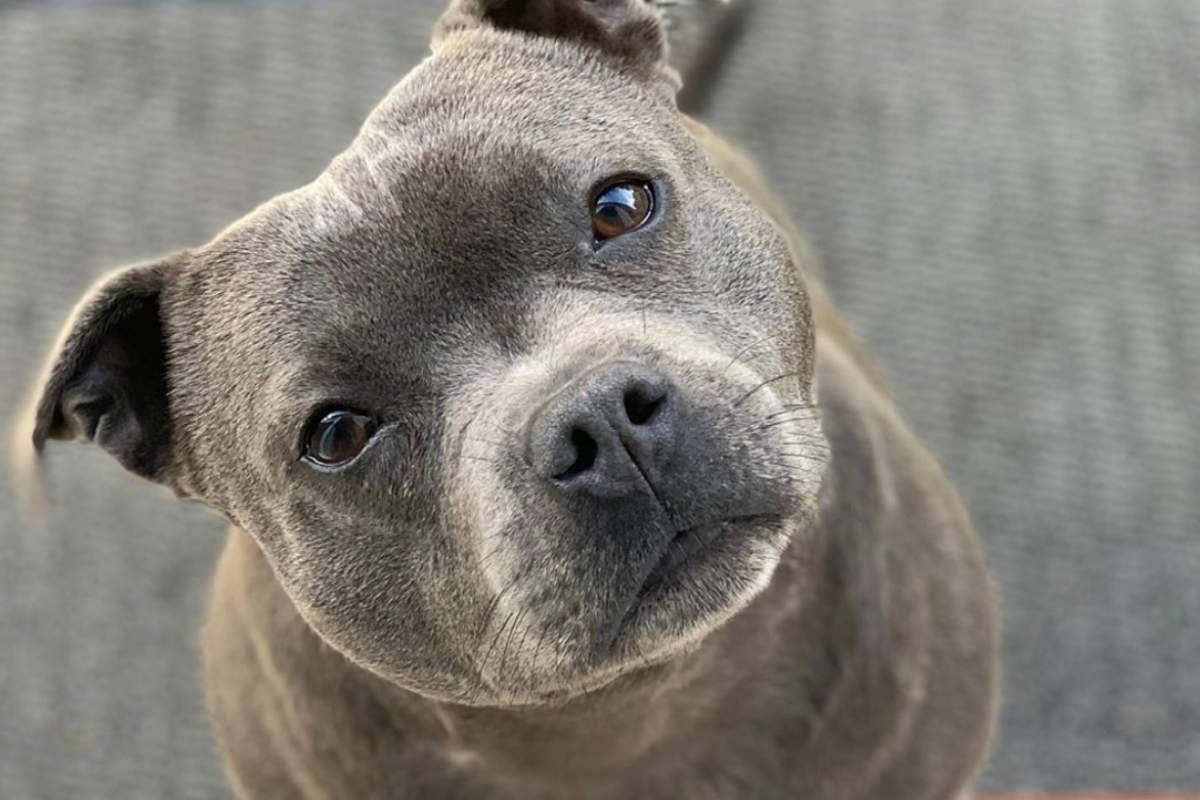 Dora, like most Staffies, is a sensitive soul with a huge heart! She LOVES anything water related and I often find her sat in my bath water before I’ve got in. She loves cuddles and always has to be by your side. She loves her toys so much that instead of destroying them like most dogs she just gently carries them round and sleeps on them. She loves people and gets super over excited when people come round. She likes to be snuggled up warm and you’ll often find her in PJs and carrying her hot water bottle around to cuddle.

4) What does an average day look like for Dora? 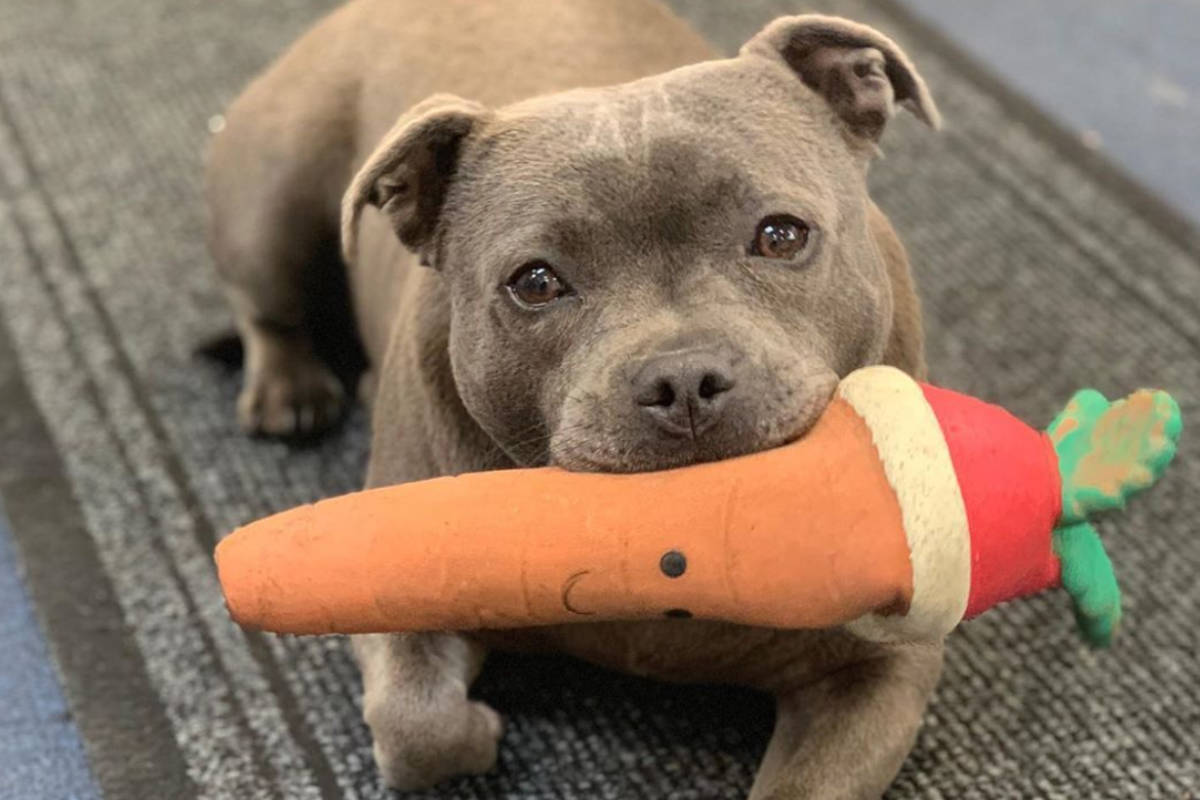 Dora comes to work with me twice a week which consists of me dragging her out of bed early (she likes her sleep) where we drop Teddy to nursery and then drive to the office. She has her own bed, toys and food in the office and spends the day pestering the team with her favourite carrot toy! At lunch time we go out for a long walk and then it’s an afternoon of snoring in her bed. We then pick up Teddy head home for dinner. Her Dad takes her out every night when it gets dark, and I think that’s her favourite part of the day. We live right by huge parks and woods and they go and explore with their head torches on. On the other days she has a dog walker collect her and she goes out for long walks with her friends.

5) What’s the most rewarding aspect of owning a Staffie?

The love. They love you so much that you can see it oozing out of their eyes. Everything they do, they do to please you. I think this is why they get a bad reputation sometimes. People that don’t love them back unconditionally and treat them bad they really take personally and it upsets them. It’s hard for them to recover from that as they are so intelligent they remember everything.

6) Would you say Staffies can make great family pets? 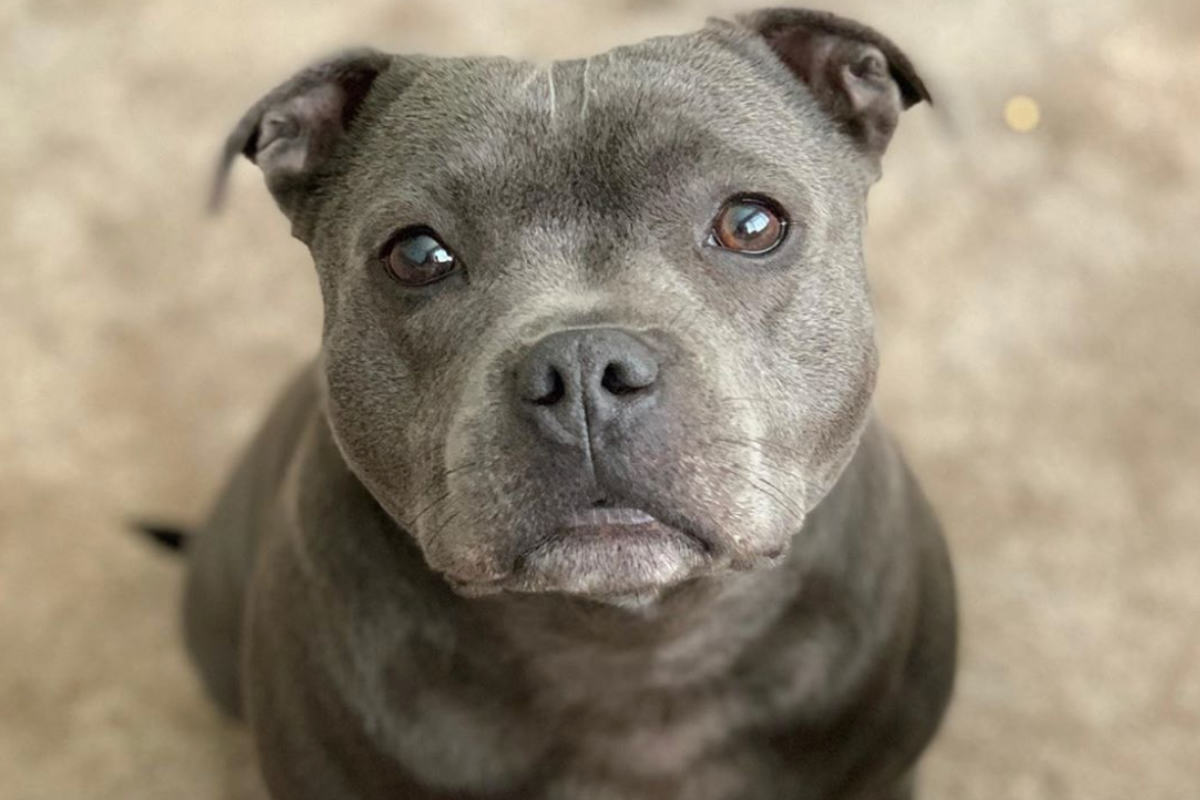 Definitely! Like all dogs of course you have to train them and continue to train them throughout their lives when huge changes come into their lives. Dora was my baby for three years before Teddy came along so as soon as I became pregnant I started to train her so it wasn’t a huge change for her. She loves Teddy so much! She follows him everywhere and I’m now teaching her again as Teddy grows and gets stronger that he is just playing. She’s slowly getting it. I know Teddy will have a best friend for a long time now.

7) What are some of the stereotypes surrounding Staffies that you’d like to debunk?

The cruellest comments that I get are surrounding stories of Staffies attacking children and babies. I find whenever I dig deeper into those stories they are not pure Staffies at all or they have been mistreated, untrained and left in gardens to live etc. Like all dogs they need training, they are animals. Staffies can be stronger than some dogs so we don’t hear about smaller breed attacks, but it happens with all breeds, and it tends to be through neglect or incorrect training. I truly believe people should have a licence to be able to own any dog. It breaks my heart that so many are mistreated.

Dora gets attacked all the time by smaller dogs (we call it little dog syndrome) , so I tend to keep her on lead now, but its laughed off because they are small. It’s not right for any dog to attack and for any owner to not have control of that, regardless of breed or size.

8) Was Dora difficult to train? 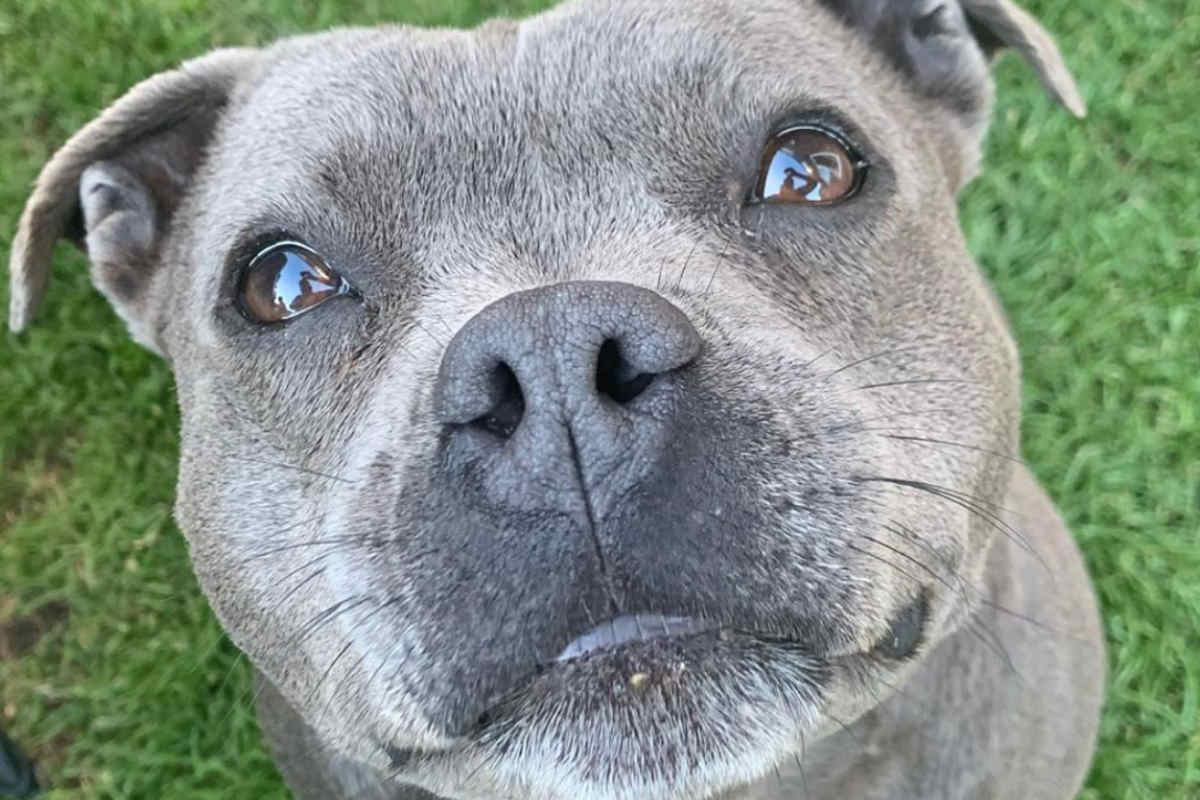 Dora and all Staffies I know are so so easy to train. They are people pleasers they want to make you happy, a good girl and a treat and she’s got it within minutes.

I made sure that as soon as she could she attend puppy classes and has always been socialised with other dogs.

She loves mind games. I find if I can’t get out to walk her enough on one day, mental stimulation can tire her out, she works them out too quickly though so I’m always looking for new games to play.

9) How does it feel to be an advocate of the Staffy breed?

Instagram dog world is such a positive place and so it’s so easy to be an advocate. My content tends to be shoot and post so people get a real life look into Dora’s life, the good and the bad. There is no better feeling than when I get messages from people saying she is the reason they have gotten a Staffy. I feel like there has definitely been a shift in the perception of the Staffy breed but there’s still long way to go so will continue to do as much as I can to change that negative perception.

10) Can you explain Dora’s fascination with hailstones/snow, as seen in your viral video?

I honestly don’t know how it started .. She always been obsessed with water. As a puppy she would find any puddle she could to play in and then she would start to beg to go out when it rained/hailed/snowed. She gets so excited that she does a huge leap out of the door and trys to catch every drop. We can’t say rain or any word that rhymes with rain in our house without her bolting to the back door. She also loves to swim and we have her little shark life jacket as Staffies are a bit chunky to swim.

She actually hit the national news when she was a puppy for eating a pair of brand new Louboutins … and she got a lot of attention so I thought I would set up a little page for her. It grew so quickly I was amazed.

12) How did you gain such a big following on Instagram? 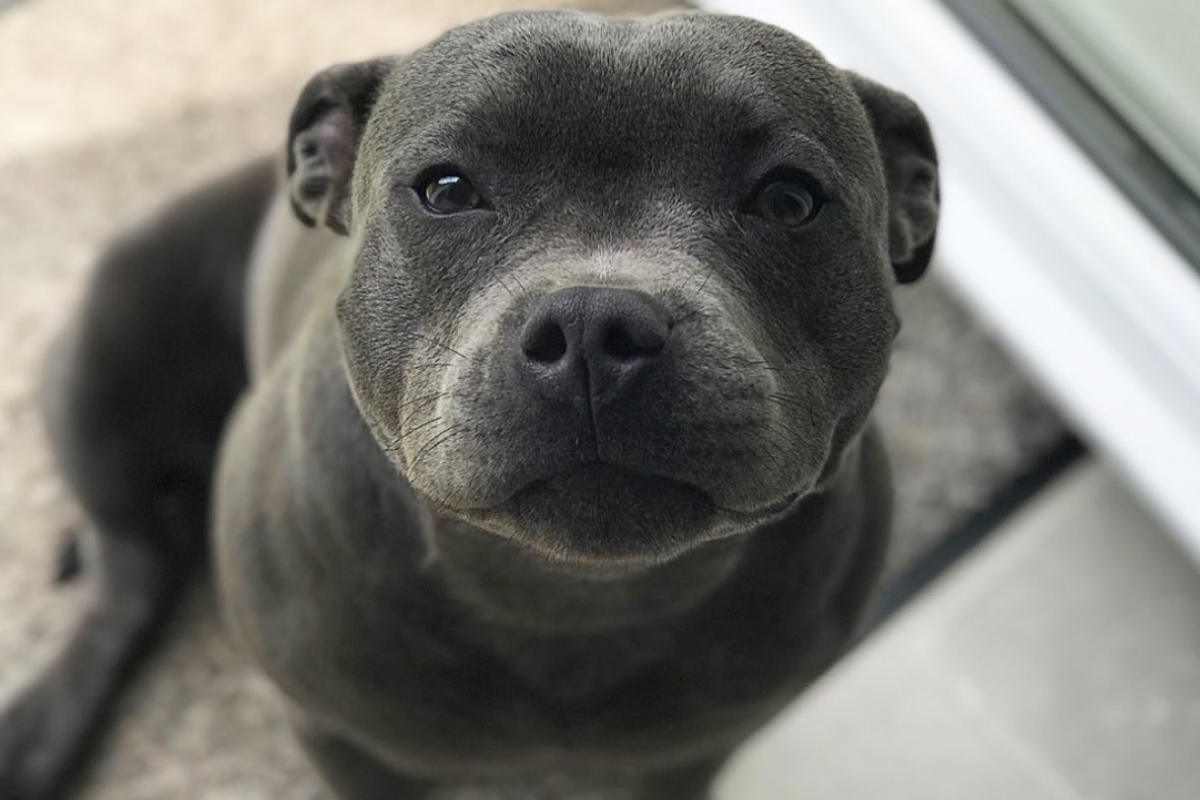 To start with I was learning who to follow, what accounts to comment on, what hashtags to use which all helped in the initial days. But it took off so quickly, before I knew it her videos were being shared everywhere. I have never ever asked an account to follow me or share my profile to gain followers as I felt that I wanted genuine followers. I definitely owe a huge thanks to Darren and Phillip, who took us into their family and we now model all their products, they are such great advocates and do so much for Bull charities.

13) What tips do you have for other dog owners who want to step up their IG game?

If you are serious about making your page work it’s a full-time job. You need to post genuine content daily and try to reply to all comments and messages and really engage with those following you. There are so many accounts now that you really need to try and find a niche. Dora’s was initially about her cuteness and now everyone knows her for her rain chasing, Teddy loving, Carrot cradling days!

14) Do you plan your IG content or is it more spontaneous?

It’s very very rare that I plan any content. I have no fancy camera I just have my phone with me and I shoot and post. Rarely do I edit photos or videos or even watch them back I just post as I go and I think this gives people a genuine feel for Dora. I always find those posts do so much better than planned posts. Although her quarantine diaries were a huge hit, but again not a huge amount of pre planning just shoot and post!

15) Would you recommend a Staffie to a first-time dog owner?

They need owners that have enough time for them. They don’t like being on their own for huge amounts of time and need a lot of exercise, if you have those two things then a there would be nothing more rewarding than owning a Staffy.

16) What advice would you give yourself knowing what you know now if you were to go back to when you first got your dogs?

Don’t ever leave shoes unattended … although Dora wouldn’t have her account today if I didn’t, so everything happens for a reason!