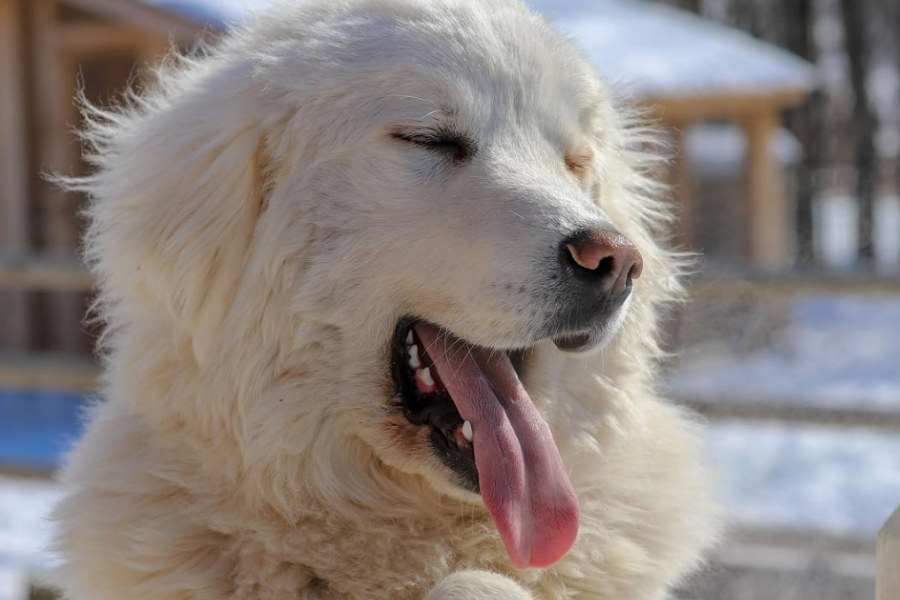 Colorado Mountain Dogs are relatively new breed that started in Colorado in 2005.

The Livestock Guardian Dogs were created by Wendy Francisco with the intention of protecting farms from predators but being welcoming to visitors.

Given Colorado Mountain Dogs have a short history, it’s little surprise that it can be tricky to find information about the beautiful dogs.

Naturally, they’re more densely populated in the US state of Colorado but they’re gradually dispersing across USA.

We spoke to Georgina from Goats of Yamnuska (@goatsofyamnuska) to learn more about the young breed.

So without further ado, let’s start our chat with Georgina about her two dogs and the breed as a whole.

1) How did you first hear about Colorado Mountain Dogs?

I first heard about Colorado Mountain Dogs in a Facebook group dedicated to the education of Livestock Guardian Dogs.

2) Why did you decide to get Colorado Mountain Dogs? 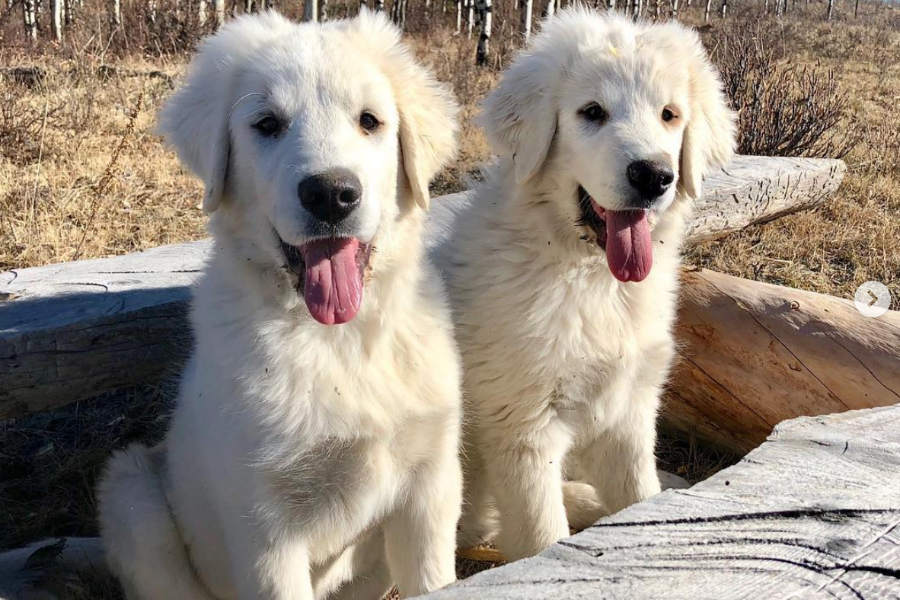 I was looking for an LGD that specifically was going to be comfortable with lots of strange people as we are a facility that is open to the general public, but also wanted an LGD that wasn’t going to be an excessive barker as that could be very disruptive to our business operations.

3) What are their names? How old are they?

Sybie and Yeti, they will be turning 1 in July.

4) Can you give us an insight into their personalities?

Sybie is definitely the more serious and work oriented of the two. She takes her job very seriously and is much more independent. Yeti is a lot more laid back and people oriented. He doesn’t show the same drive to do his job as Sybie does! He is often caught snoozing while his sister is doing all the work!

If raised as a pet, they can make great companion animals. That being said, they tend to be a lot more independent than most dogs, can be protective, and require a lot of space.

6) How much exercise do Colorado Mountain Dogs require?

This is hard for me to answer as our two are working dogs. They basically have free range all day and night and are moving around working on and off 24 hours a day.

CMD’s are specifically bred to be more stranger friendly than most other LGD breeds. Our two absolutely adore people and sometimes are caught begging for attention at the fence instead of patrolling out by the goats…

8) How do they get on with the goats and the sheep on your farm? 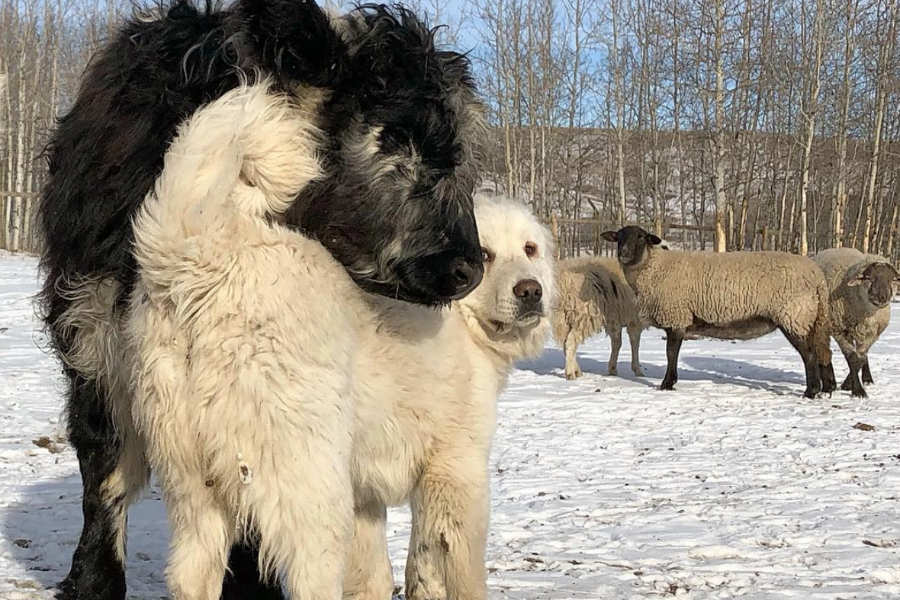 Since Sybie and Yeti are still young, they are still learning every day about how to properly do their jobs. At first our goats and sheep weren’t too happy to have two rambunctious puppies amidst their ranks, but after a while the goats seemed to have settled down. When the pups were younger they used to chase some of the smaller goats, but they seemed to have mainly grown out of that. They are extremely tolerant of the goats and sheep and have naturally accepted them as their charges to protect.

9) Have they ever encountered any predators?

Luckily our dogs have never actually encountered any predators. A big part of the job of an LGD is deterrence. Just by their presence around the goats and sheep, many predators like coyotes and foxes know it’s not a good idea to be around the goat pastures. It’s one of the reasons LGD’s bark. To deter predators, instead of having to engage with them.

10) What advice would you give to someone thinking about a Colorado Mountain Dog? 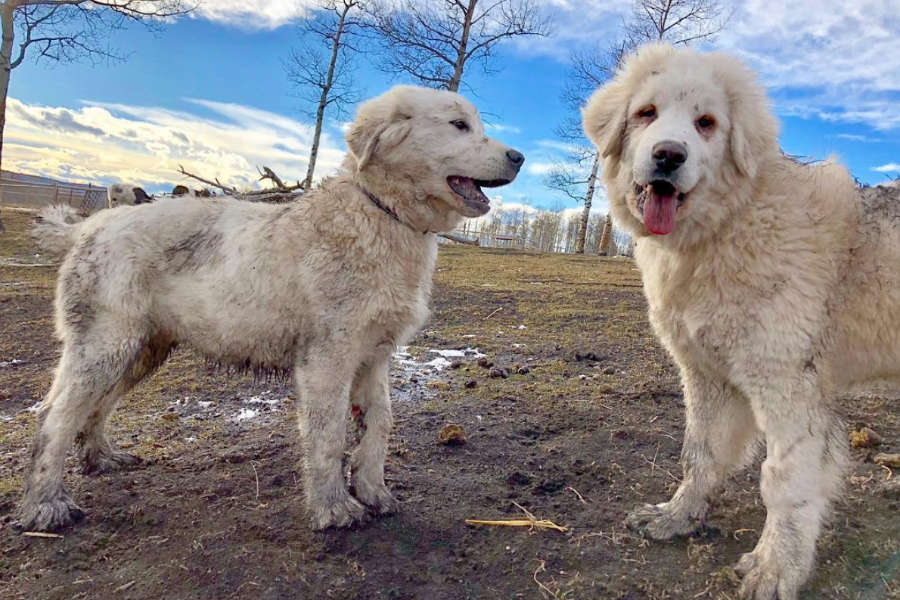 Ensure that you are able to give this animal a forever home. Be willing to put in the work to properly train your dog so that it can become a valuable asset to your form. They form very deep bonds to their people and their stock, and in my opinion it isn’t fair to rehome them.

11) Why did you decide to start your Instagram page?

To raise awareness on the ethical treatment of farm animals and that they are really no different than our pets at home. They are loving, sentient animals that love their lives and are not there for humans to exploit.

12) Have you got a lot of interest in your dogs as a result of the IG page?

Many of our visitors to the sanctuary love meeting the dogs. People find it fascinating to see two dogs completely immersed in a herd of goats and sheep!

13) How much time do you dedicate to your Instagram page?

Probably not as much time as I should!

14) Any other Colorado Mountain Dogs we should follow on social media?

StoneTable Ranch is the breeder we purchased our two pups from, and their Instagram has lots of interesting content about farm life in Colorado

Super loving and people friendly – compared to many other LGD breeds, they absolutely adore people which is great if you have a lot of people coming in and out of your property
Not excessive barkers – they only bark when necessary which makes getting a good night’s sleep much easier!
Independent – with not very much input from us humans, they instinctively know what their job is and are able to perform that job without much direction

Independent – Due to their independence they are not the best listeners and take very little direction from people!
High maintenance grooming – due to their long coats they do need some work to maintain their coats. In the spring we had to deal with quite a few mats under their ears
Late maturing – they do take 2 years to mature, which means that in those first 2 years they can make some bad decisions regarding how to interact with stock. Unfortunately we did lose a few roosters to rambunctious puppy behaviour.