Bordoodles are a cross between a Border Collie and Poodle.

Sometimes described as a designer breed, Bordoodles combine the traits of both Border Collies and Poodles.

Although it’s impossible to predict which characteristics a Bordoodle will inherit from each parent, they’re usually highly intelligent dogs.

In our bid to find out more about these wonderful cross dogs, we spoke to Lizz Greg about her Bordoodle, Jeanie.

A professional photographer, Liz’s The Girl Pack (@blackwhite.gold) account has been featured on Instagram on three occasions.

Liz agreed to shed more light on the Bordoodle cross breed as well as her tips and tricks for anyone looking to take better photos of their dog.

So without further ado, let’s start our interview with Lizz.

1) How did you first hear about Bordoodles?

Elsa my Golden Retriever / standard Poodle cross was 3 and I decided I’d like another dog. I like crosses as they tend to be healthier due to their wider gene pool. I wanted a smaller dog than Elsa, I wanted a bright athletic dog, I decided a Collie cross mini Poodle would be just the kind of dog I’d like. I didn’t know if it was a cross that would be easy to find, but I was in no rush so I started looking. I didn’t know at this point that the cross is sometimes given the name Bordoodle.

2) Can you give us some insight into how Jeanie entered your life?

I’m quite particular about what I expect from a dog breeder. The health of the mother, puppies and socialization are my prime concerns. After keeping my eye out for a litter of Bordoodles for some months I saw that an incredibly conscientious Poodle breeder was expecting a litter of puppies from her Collie / mini Poodle who had been mated to a toy Poodle.

I watched her daily posts once the puppies had been born, working out if they might be what I was looking for. Jeanie caught my eye really early on. She seemed very confident, fun, pretty full on. I got in touch with the breeder who made sure I was a suitable owner for a pup who was going to turn into quite a high energy dog. I went to see her when Jeanie was 5 weeks old and we agreed that we were well matched!

3) You’ve got three dogs – how did you end up with your pack?

Dolly the cocker isn’t actually mine, she’s my friend Danielle’s dog. Dolly and Elsa met as puppies, they became friends as did Danielle and myself. The girls walk together twice a day and in fact Danielle and Dolly do live with us at the moment as they wait for their new flat to be refurbished. If I had the room I’d have a much bigger variety pack. I find dogs so interesting, rewarding and the best companions!

4) What is the group dynamic like? Do they all have different personalities? 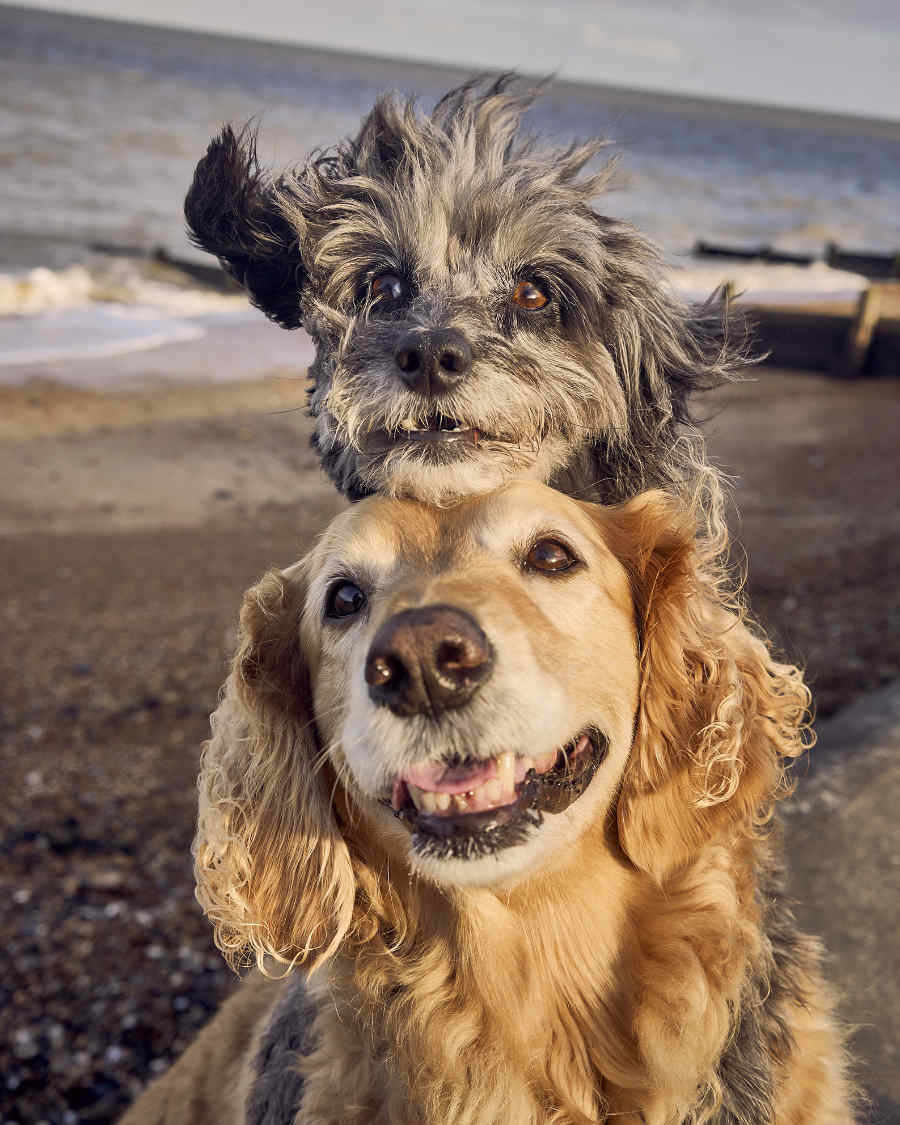 They’re very different but they work so well together. We compare them to Winnie the Pooh characters. Elsa is the wise owl, Dolly is Eeyore and Jeanie is Tigger.

Jeanie is incredibly bright. I’ve trained her using purely positive methods since she was 8 weeks old. Initially I just taught her how to play, she learnt that I was fun and worth listening to and I learnt as many ways as possible to reward her while training her. This is really worth doing with Bordoodles, they are very bright and so willing to learn but they don’t like being forced to do anything, they prefer to be allowed to make their own choices. The owners job is to persuade them to make the right choices and to reward them for doing so. With this positive grounding Jeanie can now be taught a new trick very quickly, sometimes in just a few minutes. She loves learning and she offers behaviours, she’s amazing.

6) Do Bordoodles shed a lot? Are they hypoallergenic?

This can never be guaranteed with a cross where not all the breeds involved are non-shedding. Jeanie doesn’t shed, but this is not always the case.

7) How much exercise does Jeanie require?

She needs a lot of exercise. We’re out for about 3 hours a day, often more. She loves to run, she needs to run. I think if I’d not taught her to have an excellent recall I’d be in trouble, she would have been stressed with lots of unwanted behaviours. A dog like this would not be happy on the lead all the time. She is also excellent at agility.

8) What advice would you give to someone considering a Bordoodle as a pet? 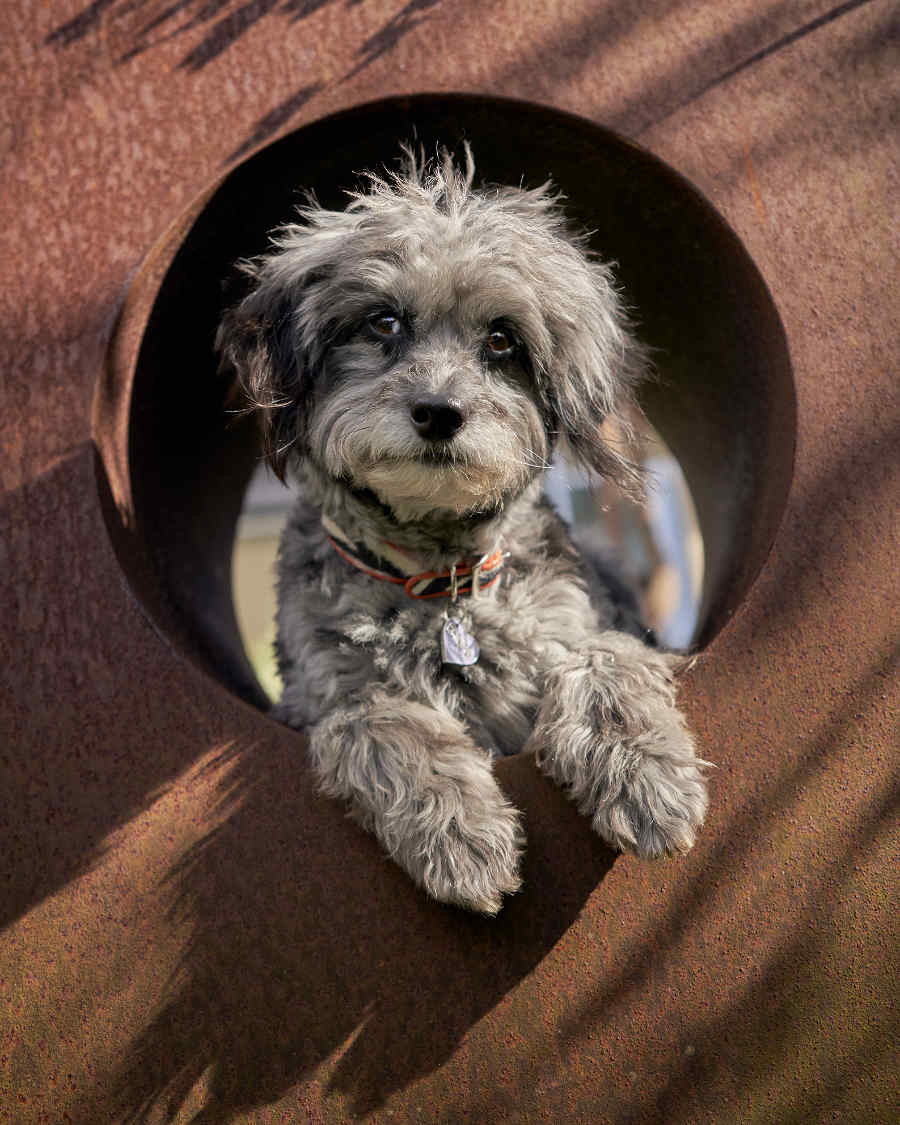 She’s a fantastic dog, I would definitely consider getting another in the future. You have to train them using fun positive methods right from them being puppies and you have to be willing to be out walking and playing with them for several hours a day.

9) Do you get stopped a lot when you’re out with your pack? Does Jeanie get confused a certain type of dog?

People normally don’t know what she is. I’ve been asked if she’s a meerkat!

10) Why did you decide to start an Instagram page for your dogs?

I’m a photographer and a couple of years ago I was commissioned by Cosmopolitan Magazine to take photos of a Bassett Hound for a story called “How to make your dog instafamous’. It made me aware of the dog community on Instagram and I liked the idea of joining in. I was already taking a ridiculous amount of photos of the dogs, so it gave me a reason to continue and somewhere to put them !

11) How much time do you dedicate to taking photos and building your community?

Taking the photos, editing them, filming and putting up the stories, basically the content creation is really time consuming. It’s like having another job ! I don’t spend as much time as a lot of people engaging with other accounts to build our following, but I do like meeting other dog obsessives on there.

12) As a professional photographer, what advice/hacks would you have for someone trying to take photos or videos of their dogs? 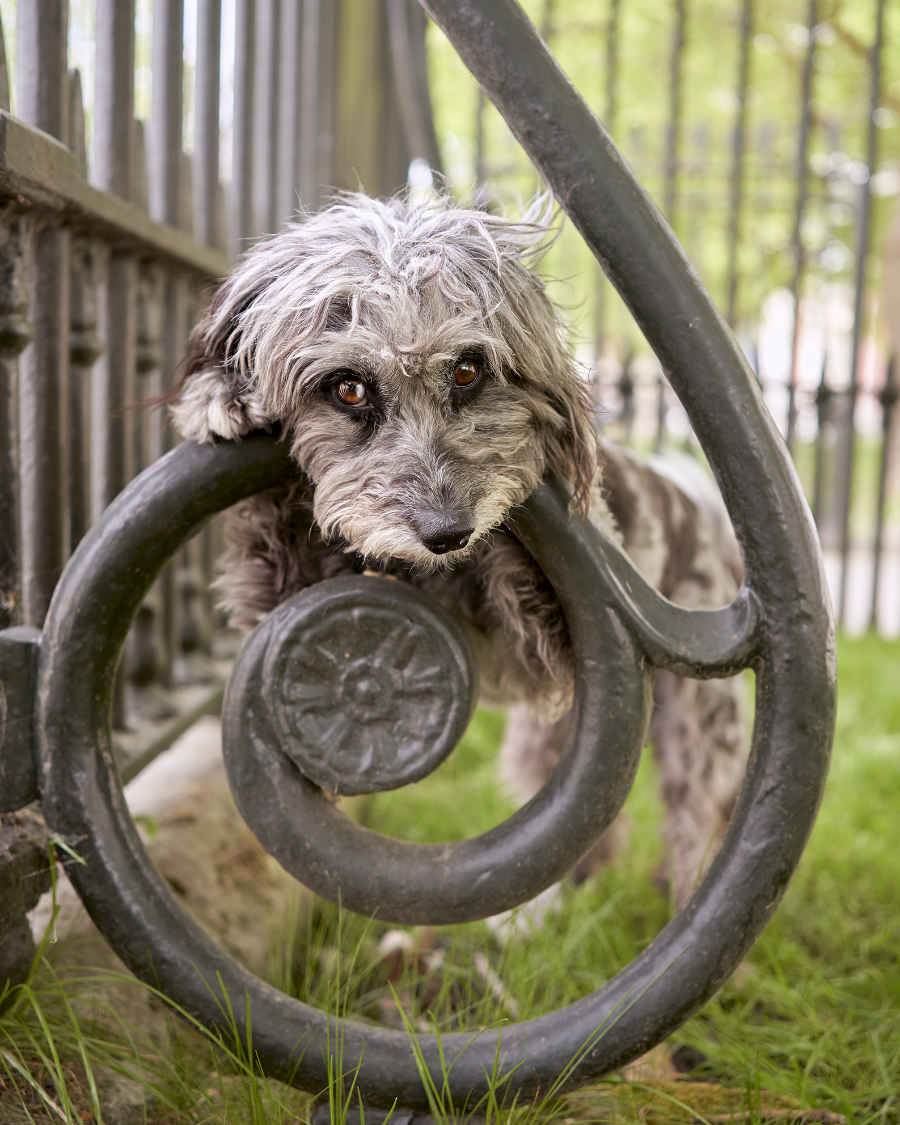 I’d say the first thing is to have fun training your dog. Teach it some tricks, teach it to have a good time with you. You don’t want pictures of a stressed dog reluctantly sitting to have it’s picture taken. Then have fun with the photo taking / filming. Try different angles, locations, poses …. Experiment, get creative !

13) For someone who wants to get serious about taking photos of their dogs, would you recommend a professional camera or does an iPhone (smartphone) camera suffice?

I mainly use my iPhone X for the videos, I love it. A phone is fine initially for photos too. It’s only worthwhile upgrading to a camera once you want more control of your photography, for action shots say.

14) You’ve been featured on Instagram’s page three times. What are the pros and cons of having an Instagram account for your dogs ?

Pros – I now have a great catalogue of the dogs’ lives, I sometimes love looking back through our feed. I’ve met lots of other dog obsessives who share my love of dogs and photography. I actually love some of the comments we get too, people regularly say that they look forward every day to our posts and that it’s a highlight of their day, it makes them happy – that feels amazing. Oh and the girls sometimes get spotted – ‘are they the Instagram dogs ?’ – so funny !

Cons – You can get a bit obsessed and it is quite time consuming. Some people make money from their accounts which maybe makes the time involved worth it, but I’ve not gone in that direction.

15) What other Bordoodle – or dog accounts in general – would you recommend to our readers? 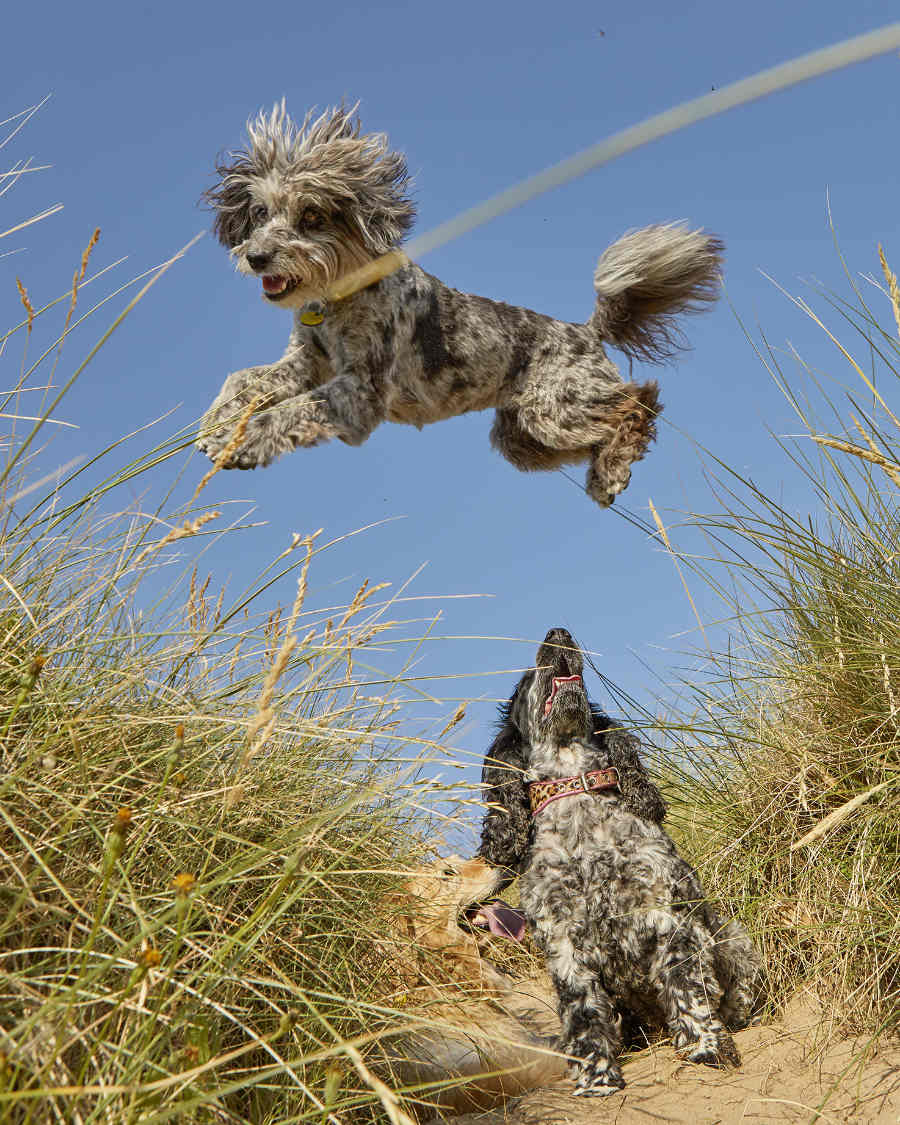 Important: Bear in mind that Jeanie is really the only one that I properly know.

• Very intelligent and very trainable with the right positive methods.
• Very loving and loyal.
• Although she has the collie need for exercise she does have an off switch. • She’s very cuddly, we often have to fight her off when she gets into a kissy mood.
• She’s very humorous with a massive character.

• She’s quite sensitive, mainly to certain noises.
• You have to learn to read them and keep a look out that they’re not becoming worried by different stimuli. Saying this she’s mainly very confident, totally happy meeting new dogs and people.
• She could have been a very barky dog. I had to work on her love for barking right from the start. I obviously let her express herself, dogs bark, but I made sure it didn’t get out of control by never rewarding her barking. For example, she used to bark for me to throw a ball, when she did I would immediately put the ball in my pocket and walk away from her.