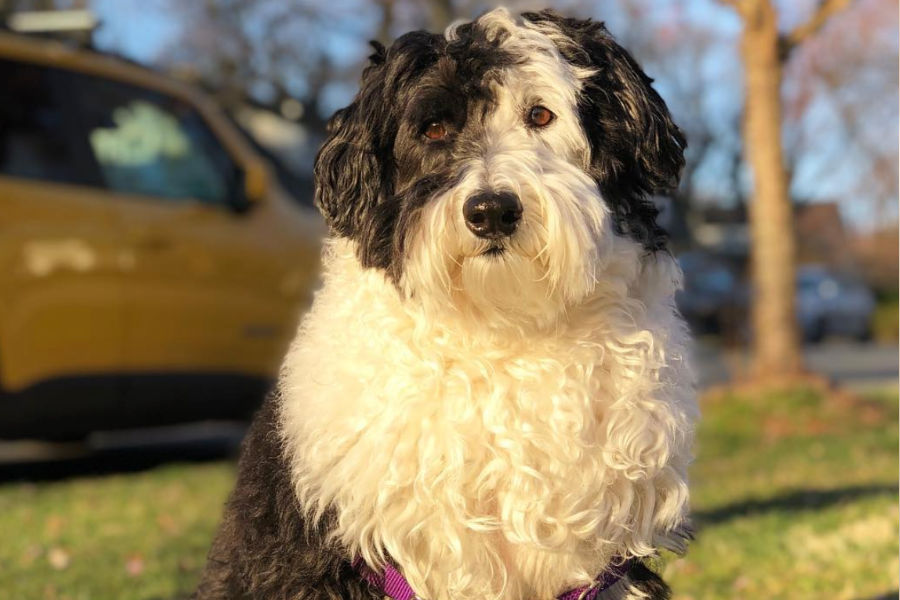 Bear The Sheepadoodle is an Instagram famous dog with over 23,000 fans.

Sheepadoodles are a hybrid cross between an Old English Sheepdog and a Standard Poodle.

We spoke to Bear The Sheepadoodle @sheepadoodlebear to learn more about these magnificent canines.

While we wanted to find out more about the breed, we also wanted to learn the secret behind Bear’s success on Instagram.

So without further ado, let’s start our chat with Bear. 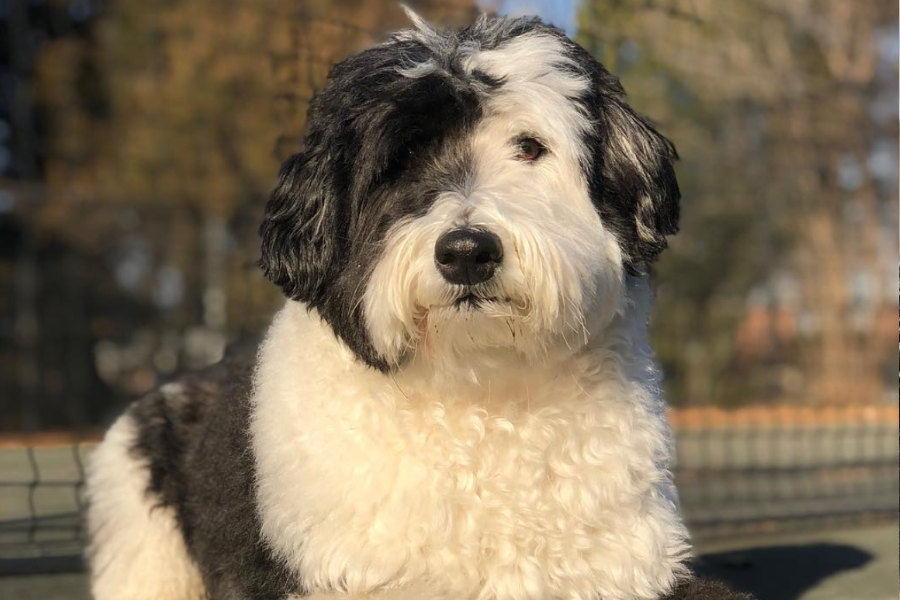 Bear is an “instagrandpa.” We started his account almost 6 years ago when Instagram was first starting to gain popularity. My husband and I posted a lot of photos of Bear on our personal accounts, but started to worry that we were annoying our friends. So, @sheepadoodlebear was born and has been a fun hobby ever since.

2) How much time do you dedicate to building your Instagram page?

More than I should, but also not as much as I’d like. I probably spend an hour a day on average creating content, posting, replying to comments and DM’s, answering emails, and commenting on/liking photos. I try not to be on my phone too much around my kids (ages 2 and 4), which leaves me with patchy time throughout the day to take photos, then evenings for the rest.

3) What is Bear’s personality like? How old is Bear? 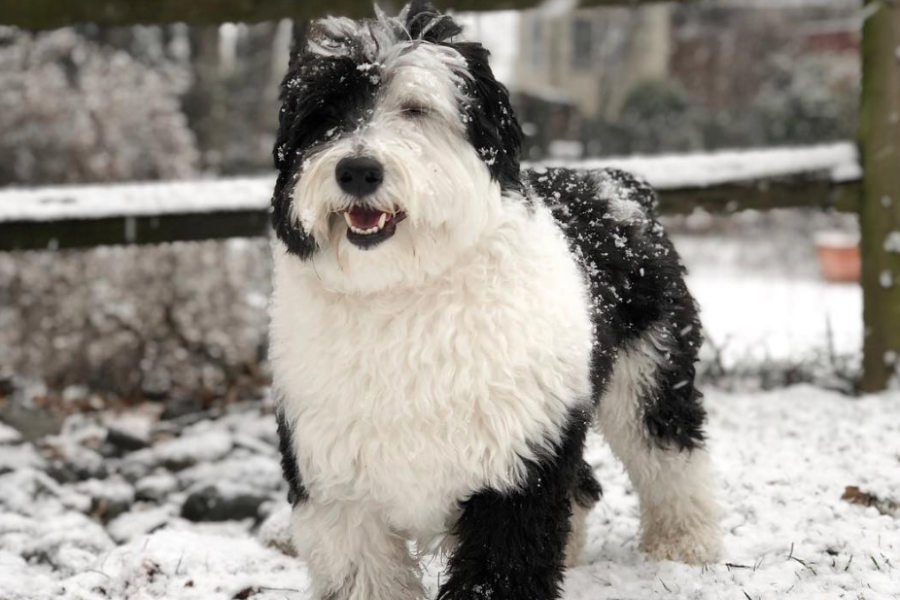 Bear will turn six in June. He can best be described as a friendly clown. Every year we think, “this is the year Bear is going to settle down,” and every year he proves us wrong. He loves to play, play, play at all times. He never gets tired and always wants to be part of the action. We take him on at least two long walks a day and he joins me and the kids at the park almost every day…and he still has excess energy! Lucky for us, it’s not destructive energy. He is just about the most friendly dog you’ll ever meet. He loves every person and dog, and can often be found at the park surrounded by a gaggle of kids all smothering him with treats and snuggles.

4) Your favourite memory with Bear?

When we brought our first baby home, Bear would get up with me all night long for every diaper change. He would dutifully stand next to me and put his paws up on the changing table to keep watch on my daughter. I think that’s the only time I’ve ever seen him tired – those first few weeks of baby!

5) What’s the most challenging aspect of owning a Sheepadoodle? 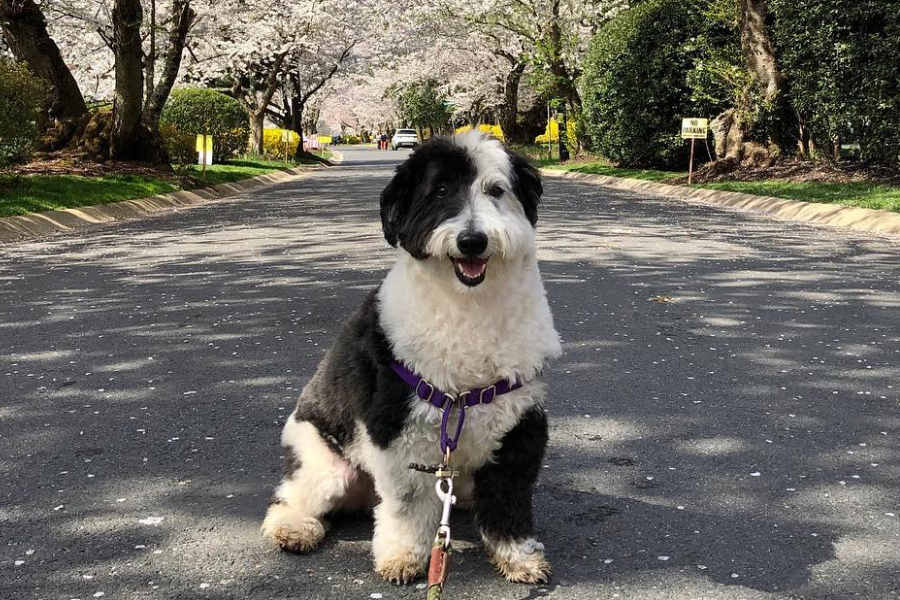 The never-ending energy! I always say that Bear is the best exercise plan I’ve ever done because he forces me out on two walks or jogs every day (if I want him to be at all calm at home). He’s my third toddler!

6) Does Bear get a lot of attention out and about?

Yes! Everywhere we take Bear, we get stopped every few yards by people asking to pet him or asking what type of dog he is. He is always surrounded by kids because he looks like a real life teddy bear. Luckily he loves it and never gets tired of the attention.

7) Would you ever consider getting a second Sheepadoodle (or dog)?

I would love to at some point, but with two young kids and Bear being so active and attention-intensive, I don’t think I’d be able to handle it! People already can’t help but laugh as they see me pushing a double stroller while walking a dog. I think two dogs would put me over the edge.

8) Is it true Sheepadoodles don’t shed? 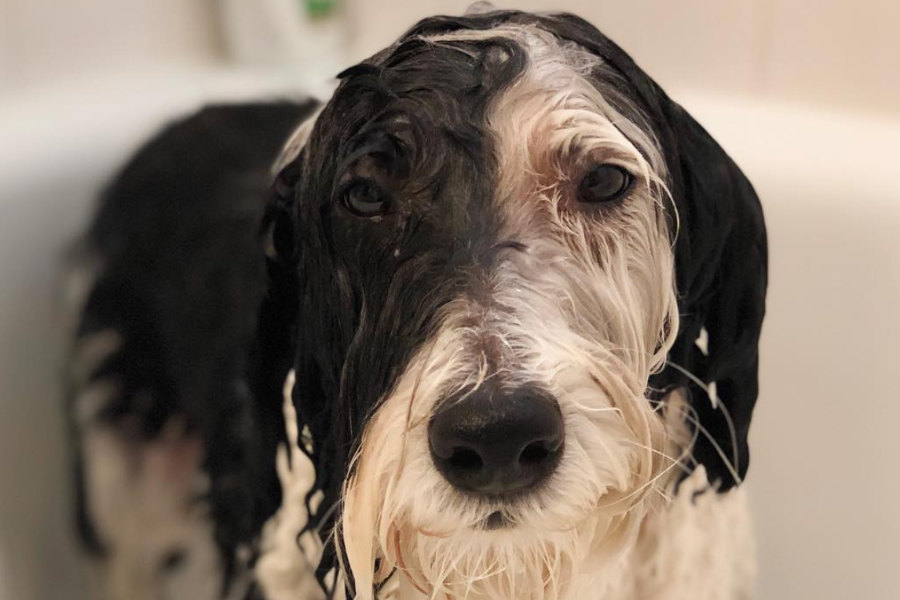 Yes! Mostly. Bear sheds about the same as I do, which is to say not much. I can wear black pants around him and not end up with any fur on them. However, he requires a lot of brushing and grooming in order to hold off mats and tangles. When I brush him, quite a bit comes out.

9) Do Sheepadoodles make great family pets? If so, why?

Sheepadoodles make fantastic family pets. I’ve never met a dog that’s happier around kids or other dogs. Bear is the perfect dog sibling to my kids and they love getting into mischief together. They love Bear and refer to him as their “fluffy brother.”

10) What advice would you have for people considering a Sheepadoodle as a pet? 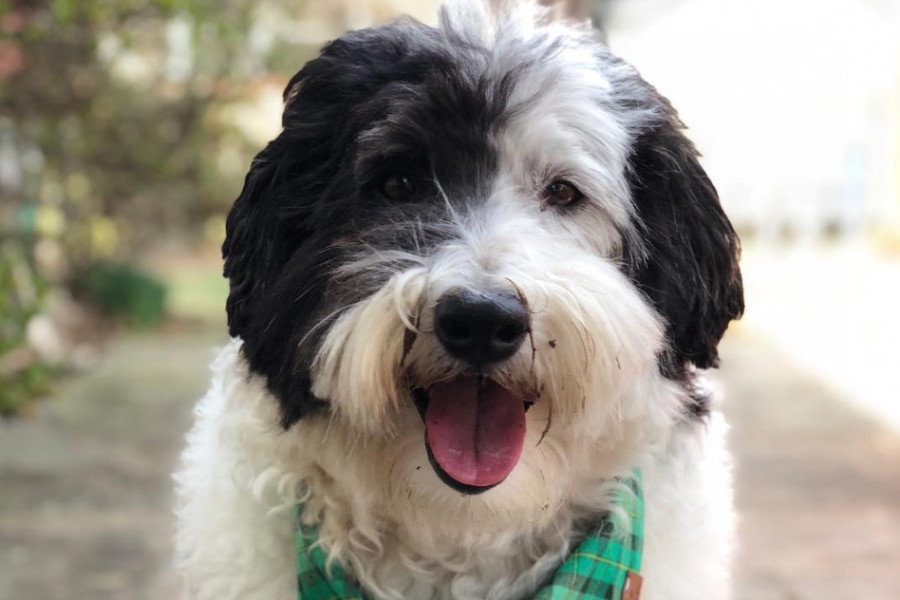 Be prepared to be active! Sheepadoodles are poodle-smart and sheepdog-active. They like having a project and being part of the action. Make sure you’re willing to put in the time to tire them out every day. Also, make sure you’re up for either learning how to groom them yourself, which is time-consuming, or be willing to pay for habitual grooming, which can get expensive.

Oh how I wish there were a secret. For me, it’s been about building a community of like-minded pet and dog lovers all around the world. Pet Instagram is a happy place and I love getting to be part of it. My tip to succeed on Instagram would be to create a community that you love. Create friendships rather than worrying about numbers. Use the opportunity to get to know people all around the world and lift them up. Make people smile. Don’t take yourself too seriously…there’s nothing worse than a “stuffy” dog account.

12) What other Sheepadoodle account would you recommend helloBARK! readers check out?

How do I even begin? @boogie_the_sheepadoodle is adorable and makes me smile on the daily with his antics. @misterbogey has gorgeous photos paired with the most creative and hilarious captions. @sheepadoodle (Millie the Mini) has the roundest, fluffiest face on Instagram and I want to reach through the screen and hug her. And of course @otis_unleashed whose personality is simply unparalleled.