Alaskan Klee Kai have attracted increasing media attention over the past couple of years.

Game Of Thrones actress Sophie Turner put these dogs in the spotlight after the British star brought home a black and white Klee Kai called Porky Basquiat in 2017.

With these Alaskan dogs becoming increasingly popular on social media, there are a number of Klee Kai accounts that you can follow on photo-sharing app Instagram.

One such profile is @lifewithkleekai, who have two Alaskan Klee Kai dogs called Copper and Skye.

We decided to create the account for Copper and Skye so we could have one location to store photos of their adventures from puppyhood to adults. We didn’t want to bombard our friends with snaps of our Alaskan Klee Kai, so thought creating an account would be a fun way to curate their lives.

What are their personalities like? Do they differ a lot?

Skye is six months older than Copper and is more social. She is our black and white Alaskan Klee Kai. She loves to meet new people and is a big flirt! Skye likes to think she is the boss of the house. She is obsessed with her toys and will demand a game of fetch with anyone she meets. She is an independent thinker and is happy to sit at the window by herself and look at other animals or people walking by. Skye is a mummy’s girl when it comes to downtime in front of the TV. She loves to curl up in a ball next to Mum.

Copper is shy around strangers and can take a while to come out of his shell. He isn’t really interested in toys as Skye is his big chew toy that he likes to annoy, bite and chase around the house. However, he has a cute side too. He craves human company and will follow Dad around the house. He is very food motivated and treats are usually required to get him to follow commands. Copper’s party trick howling on demand.

Your favourite memory with them?

We have a lot of great memories with Copper and Skye, such as going on many beautiful hikes around the Bay Area. We were so proud of them for making the big move to London from San Francisco this year. But our favourite memory is going whale watching in Monterrey in 2018 (even though Copper did get sea sick!).

Is an Alaskan Klee Kai a Husky? 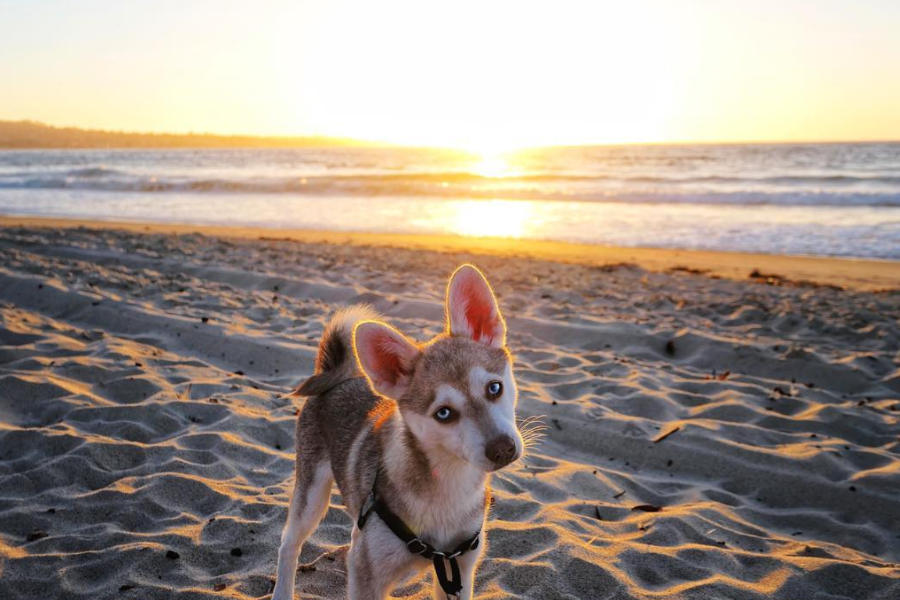 One of the questions that we get asked the most is whether our dogs are husky puppies. Most strangers assume that our pups are baby huskies that will grow to a big size. Some eagle-eyed observers do notice their paws and will ask if they are mini huskies. However, Alaskan Klee Kai is a breed of its own.

What are Alaskan Klee Kai mixed with?

Alaskan Klee Kai were created by Linda Spurlin in Alaska in the 1970s. She used Alaskan and Siberian Huskies, which explains their colourings. To reduce the size of these dogs, Spurlin used American Eskimo dogs and a Belgian breed called Schipperke.

How big do Alaskan Klee Kai get?

They come in three different sizes – standard, mini and toy. The standard are usually between 15 and 17 inches. The breed are measured on their height, rather then their weight. Copper and Skye are toy Alaskan Klee Kai. Our friends are usually surprised by how small they are in person. Apparently they look much bigger on Instagram.

One of the biggest headaches with Alaskan Klee Kai is their shedding. These dogs shed a lot so be prepared for lots of grooming and hoovering. They have two coats and their undercoat will blow out twice a year.

Copper and Skye have now experienced both hot and cold climates. They never had any issues going for hikes in the California heat, although they had a steady supply of water whenever we went on our 5 mile walks around the many beauty spots in the Bay Area. Skye encountered snow once in Oregon and loved it. But neither were prepared for the cold weather in London so we ended up buying them jackets and boots to make them feel more comfortable. The irony isn’t lost on us that these Alaskan dogs struggled with the ice and snow rather than the heat! 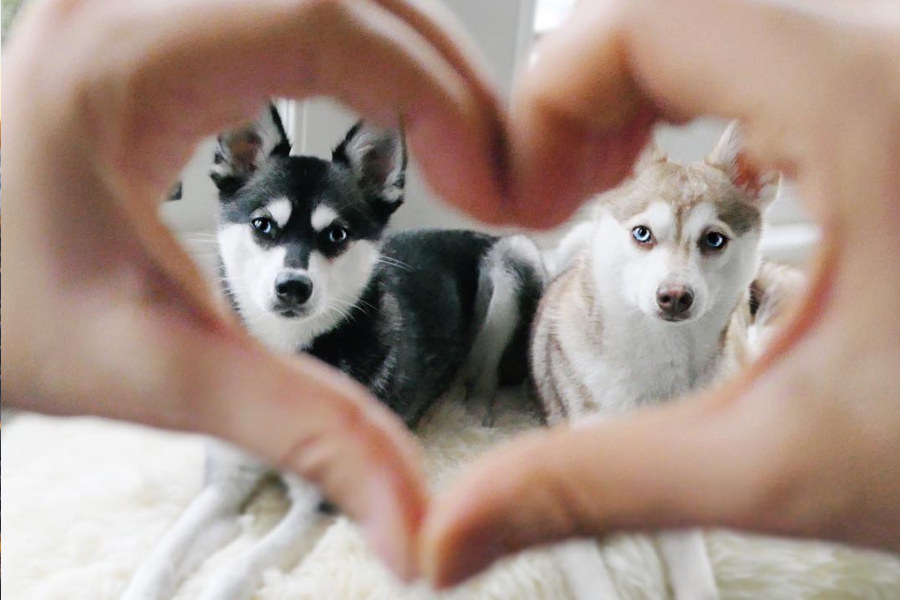 They are often describe as the cats of the dog world. Copper and Skye love the climb on furniture to get a better view. They groom themselves a lot too. Alaskan Klee Kai are very vocal. While Copper will howl on demand, Skye is the more talkative of the two. She will let us know if she is unhappy about something. They are both quite stubborn and need regular training to keep them on their toes. While they are small dogs, they have a lot of energy and have never struggled when we go on five-mile runs.

With the right training and a decent amount of patience, Alaskan Klee Kai are good family dogs in our experience. They may be independent at times, but you always feel their love. They love companionship and our two love nothing more than to cuddle up on the couch at the end of the day in front of the television. We found puppy classes and plenty of socialisation with other dogs and humans is very important.

What advice would you give to pet owners who want to make their dogs Instagram stars?

Just have a bit of fun with it and don’t take it too seriously. Some Instagram accounts are aesthetically pleasing but don’t have half the followers or interaction of other profiles that post funny content or videos. Do what pleases you and interact with the community relevant to your dog!

If you want to learn more about Alaskan Klee Kai, look no further than helloBARK!’s profile of this wonderful breed.