★★★☆☆
helloBARK! may earn revenue if you click the links featured on this page and make a purchase. Find out more

Leaving your dog at home alone can be an anxious and stressful experience.

Even the best behaved dogs can get up to some mischief when unsupervised around the house.

For people who have pets that suffer from separation anxiety, going out can become a real ordeal.

There are an increasing number of dog cameras available online that can help to alleviate this issue.

These devices allow dog owners to communicate with their precious pooches and ensure everything is ok.

In this article we will take a look at the Clever Dog WIFI camera, examining its features, what customers are saying about the device and the price.

So let’s knuckle down and learn more about Clever Dog WIFI camera.

What is Clever Dog?

Clever Dog are a company that design Wifi and security surveillance cameras.

The device has real time video which allows you to keep tabs on what is going on at home.

Clever Dog WIFI camera is able to rotate 360 degrees rotation, so you won’t miss a thing.

With night vision, you will be able to check on your pet day or night.

It has two-way audio so you can interact with your dog or impress your work colleague with some commands and tricks.

The product is available in different colours so you can pick the style that suits your home’s decor.

Clever Dog WIFI camera is one of the most affordable options on the dog camera market.

Clever Dog WIFI camera doesn’t come with a treat dispenser for your dog, which is a disappointing omission but understandable given the price.

The camera is marketed as a security camera with functions that allow it to be used as a device to monitor pets.

While Clever Dog WIFI camera is described as wireless security camera on Amazon, the company are keen to stress that this device can double up as a pet cam.

On their website, they point out that you can interact with your pet using the talkback feature, which is the product’s two-way audio system.

The built-in speaker and mic allow you to quickly stay in touch or check-up on your pet using a smartphone without the need for a telephone or computer.

Clever Dog WIFI camera doesn’t include audio detection, which means you won’t receive any notifications if your dog is making a lot of noise at home alone.

However, the device does have movement sensors so you can keep tabs on your dog. When motion is detected, you will get real-time notifications to your app so you know what’s happening at home.

Although this is a budget option for those interested in purchasing a dog camera, the product does have night vision.

With an infrared light sensor, the camera allows you to see up to 15 feet in complete darkness.

This is a great feature that gives you freedom to check on your pet day or night. You won’t have to worry about rushing home from social events after work. 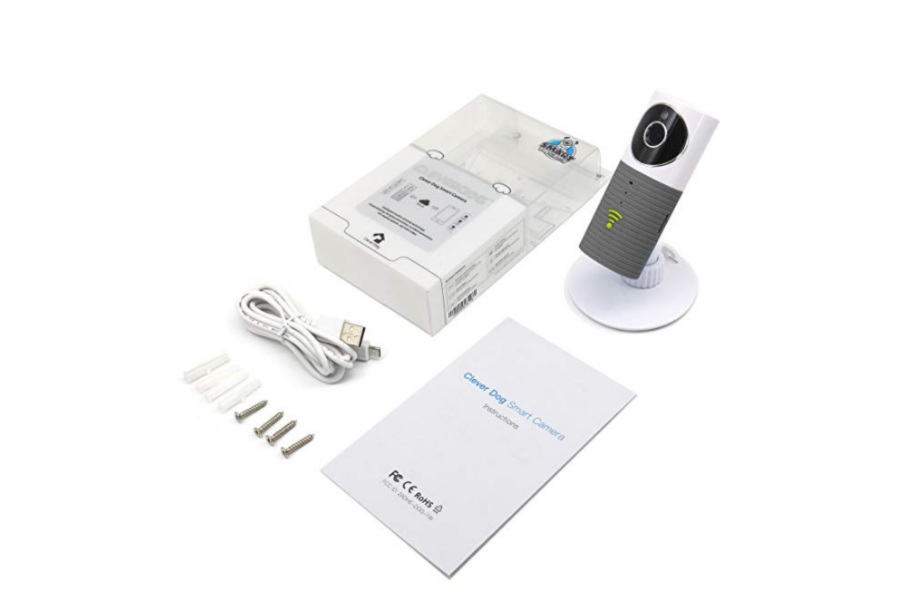 Clever Dog’s camera has a simple set up process. It is not battery operated. You will have to connect the device into the mains using a USB cable and a plug.

You can pair the app with the device over WIFI or on 3G or 4G if you’re not at home as long as the device is connected to your home WIFI.

Customers are provided with a Wifi Smart Camera, a USB Cable, a trestle pedestal, bag of screws plus the user manual and warranty service card.

There is no plug provided so customers will have to source this piece of equipment themselves.

Given its compact size, Clever Dog can be placed in a number of locations around the home and shouldn’t be an eyesore.

Some customers have noted that the camera is a bit top heavy so it is a good idea to weight the base.

It is one of the cheapest options on the dog camera market.

It should be noted that Clever Dog have a number of different models for sale on Amazon.

As a result, there are varying prices for their products.

helloBARK! recommends doing careful research to ensure the dog camera you purchase has the features that you want.

What people are saying about it

The Clever Dog camera reviewed in this article has an average rating of four stars on Amazon.

One customer who gave a five-star review was happy with the device despite some issues with its reception:

“Great little camera. As long as you have a plug with USB port on back it can go anywhere. The app was simple to download and use. The best reception to use is with wifi connection but equally 3G/4g is good but reception can sometimes be intermittent depending on signal you have.”

An Amazon user was delighted with the product and gave a four-star rating but listed one issue with Clever Dog:

“Small downside is the noise when listening to the camera. Despite it being a quiet room it sounds like a fan or something similar is on. Other than that I have no issues so far, into day 3 of use.”

One unhappy customer was disappointed with the number of connectivity issues experienced:

“Unfortunately I have been left quite unimpressed with this camera. The picture quality etc. is fine but from day one I have had issues when viewing it (via the app on my phone) when not connected to Wifi. Even though my 4g signal is very strong and every other element on my phone (that requires a data/internet connection) are working fine, I can only ever view the camera for around 3 seconds before the signal drops out and the image freezes.”

In helloBARK!’s research on the camera, we noted a number of complaints about connectivity issues.

A substantial number of customers had trouble connecting to Clever Dog using the app on their smartphones.

You will also need to insert a memory card into the device to record video.

The device itself doesn’t have a treat dispenser, which is a really useful tool for dog owners with furry friends that require a lot of entertainment and stimulation.

Is this the best dog camera?

While there can be no arguments about the price, helloBARK! doesn’t rate Clever Dog as the best dog camera available at the moment.

It is missing some key components for dog cameras, although it does have some impressive features given the price point.

You can check out our updated guide on the best dog cameras available right now by clicking on this link.

Clever Dog WIFI camera doesn’t include a plug so you will need to be resourceful and locate one to get this product to work.

You will need it to as one end of the USB cable goes into the device and the other into a plug, which is connected to an electrical outlet.

It is an affordable dog camera for pet parents with a limited budget.

The fact that is has two-way audio and video means you will be able to see and communicate with your precious pooch.

However, it is lacking some key features such as a treat dispenser and requires other parts like a memory card and plug to fully function.

The three best dog cameras
We've picked out the top three leading dog cameras on the market right now to help you keep an eye on your pets
Follow @hello.bark on Instagram