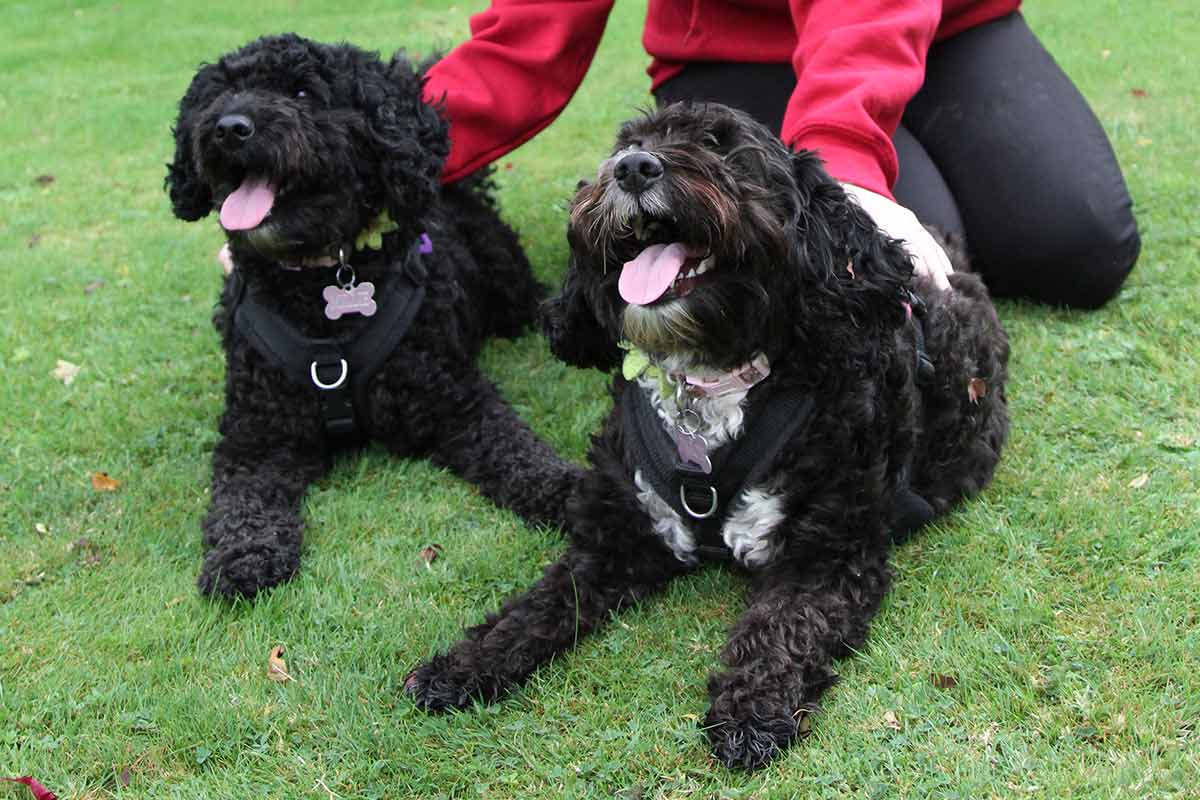 By Kieran Beckles
Updated on 30 November 2020

Darcie and Mille are the University of Buckingham’s two therapy dogs.

The two Cockapoos were introduced to the university in a bid to improve student experience and provide extra support for the mental health of students.

Darcie and Millie have been a huge hit and their therapy sessions have been an overwhelming success at the University of Buckingham.

Whether it’s one-on-one sessions with Darcie or Millie or simply going for walks around campus, students have responded positively to these Cockapoo therapy dogs.

Dee Bunker, Head of Students First, University of Buckingham, is responsible for taking care of Darcie and Mille.

We spoke to Dee to learn more about the thinking behind the university introducing two therapy dogs to campus as well as the benefits that Darcie and Mille have brought to students.

How did the idea of a therapy dog first come about at University of Buckingham?

Our Vice-Chancellor at the time, Sir Anthony Seldon, asked our Students’ Union committee how we might be able to improve our student experience and provide extra support for our students’ mental health. It was our students who first suggested the idea of a therapy dog, as they believed it would help with the transition from home to university, especially for those students missing their own pets.

What were the steps required to make this idea a reality? 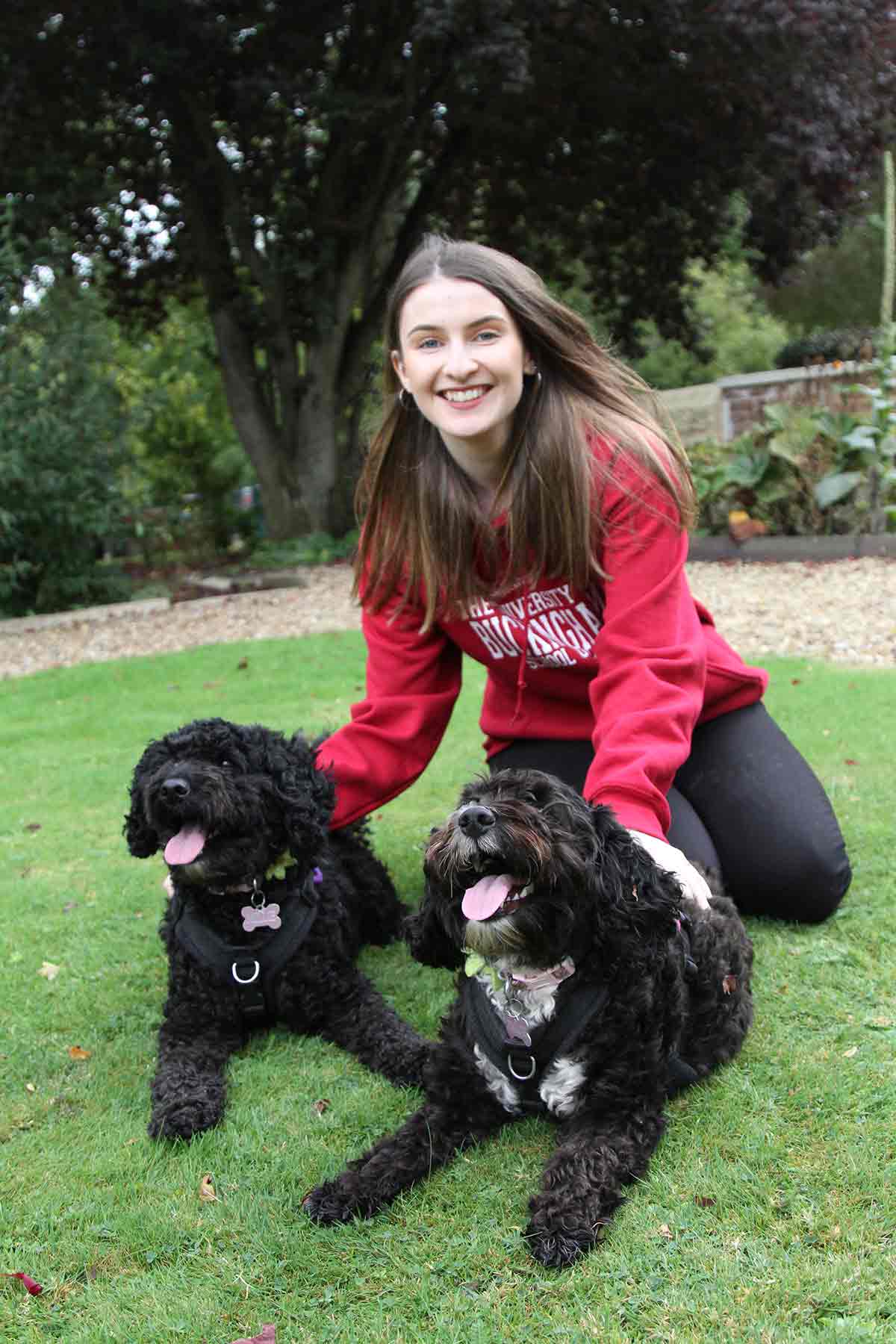 The first step was to decide who would be responsible for taking care of our therapy dogs, and the students nominated me!

We spoke at length about what would be required from the University in order to make this work for both us and our new additions to the team, and spent months researching the appropriate breeds and training programmes. We chose two Cockapoos because of their temperament, intelligence and ease of training, and the fact that they are also hypoallergenic, which means that students with allergies shouldn’t be affected.

During this time, Anthony was involved with the charity Sane who were promoting their “black dog” campaign. The idea behind the campaign was to highlight depression and other mental health conditions, and encourage people to seek help. The image of the Black Dog has been used from classical mythology through medieval folklore to modern times as a universal metaphor for depression and other mental illnesses. We wanted to honour the ethos of the ‘black dog’ campaign and that’s why Millie and Darcie are both black!

What is involved in the average therapy dog session with Millie and Darcie?

We hold regular walks around campus with Millie and Darcie where students can come and say hello to them, get some fresh air and exercise, and talk with others.

We also have 1:1 appointments available. Whenever a student wants to make an appointment with myself then I always check as to whether they are ok with having the dogs in their session. 99% of students say yes and are happy to be greeted by two very affectionate and friendly dogs. They are very in tune with people’s emotions and immediately sense if a student is upset. During a session they will sit with the student, either on their lap or beside them on the sofa, and remind them that they are there to help with settling their emotions and concerns. They love to be stroked and will give the student a gentle nudge to remind them they are there. If a student cries you will often see them trying to lick away their tears.

What are the benefits of having therapy dog sessions at your university? 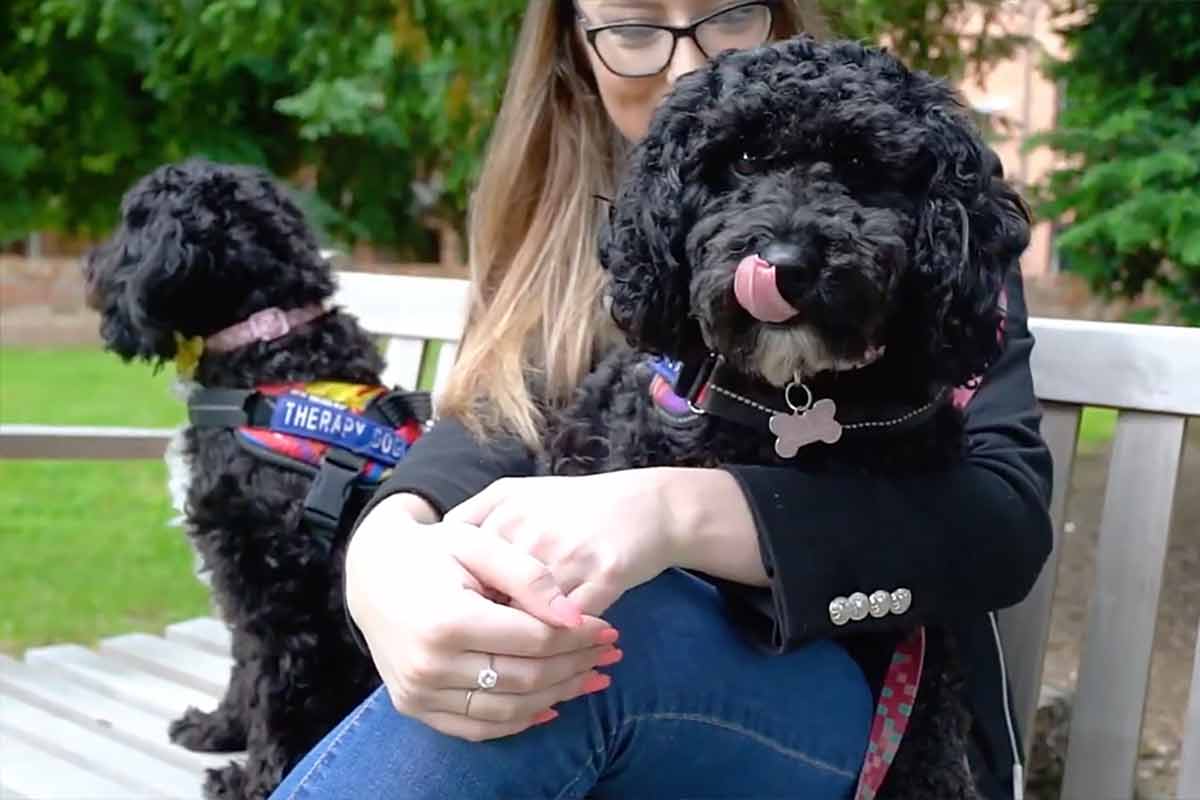 The benefits of having therapy dog sessions at university are amazing to watch. Both dogs know their roles and they encourage the students to cuddle and stroke them which releases happy endorphins in the brain. They have a calming effect and encourage students to talk about what they are feeling, this has a particularly remarkable effect on any anxious or stressed students. They act as a distraction technique.

Have you seen any surprise/unexpected benefits?

You can visibly see a student relax and open up more during a session and the happiness, joy and love they show towards them is heartfelt. Both Millie and Darcie love the company and are very sociable. They clearly recognise and read a student’s body language and emotional cues. The atmosphere that they create is one of calmness and serenity after their initial greeting. Millie will always give a student a toy to play with and Darcie will always share her treats with students.

What do students say about their sessions with Millie and Darcie? 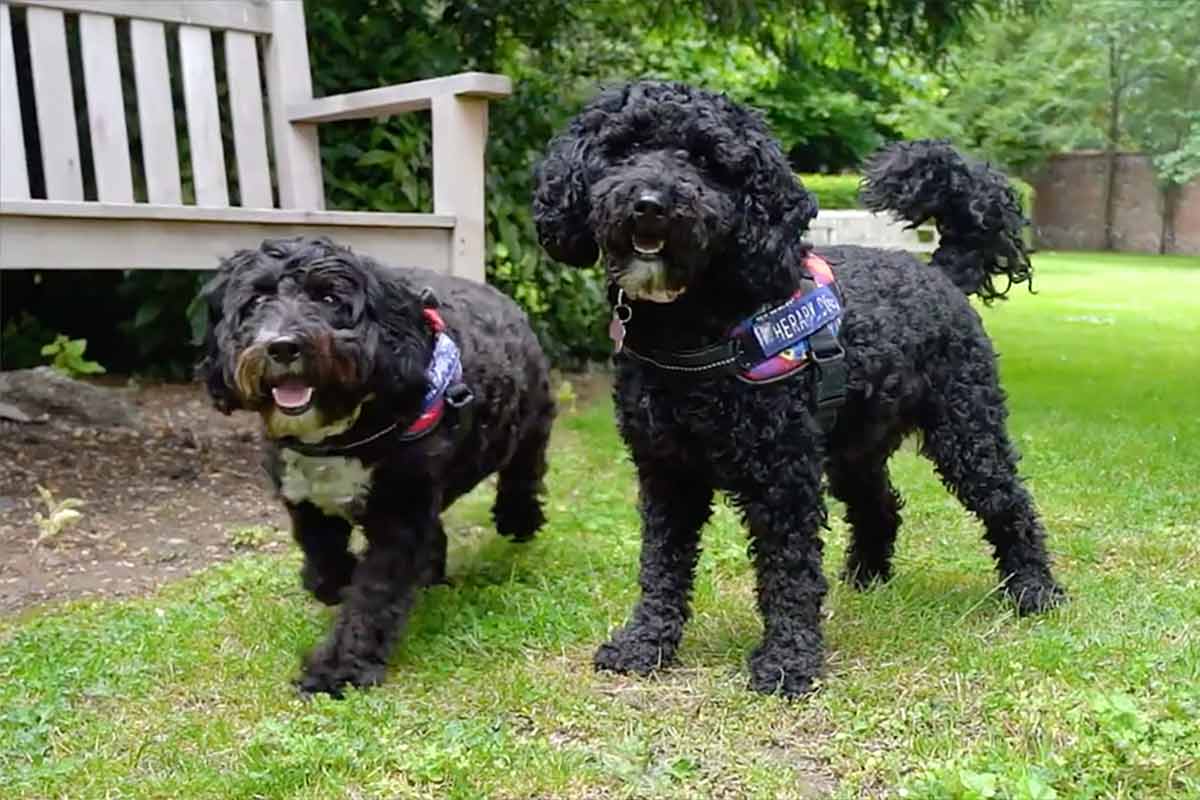 We always have lots of positive comments about the sessions with Millie and Darcie. Many students just turn up at my office without an appointment to come and play with them and take them out for walks. They usually go out with one or two students, but often return with a lot more in tow as they seem to collect them on their way! Students with severe mental health illnesses say that they really benefit from being with them because they do not judge, do not comment, and give unconditional love freely.

What would you say to students who may be stressed due to exams or the pressure of being away from home but haven’t tried a dog therapy session before?

I would encourage any student who loves dogs to come and see them or get their school of study to arrange de-stress sessions with them. This worked really well in our Medical School prior to exams, where they would spend three to four hours with the students relaxing and playing with them. I have also taken Millie and Darcie to the examination halls previously to let them de-stress and stroke them before going into their exams to improve their stress and anxieties. You can imagine the relief and joy shown on a student’s face and in their body language when they see some happy, smiling dogs wagging their tails.

Finally, do you believe this is something all universities and educational institutions should consider? 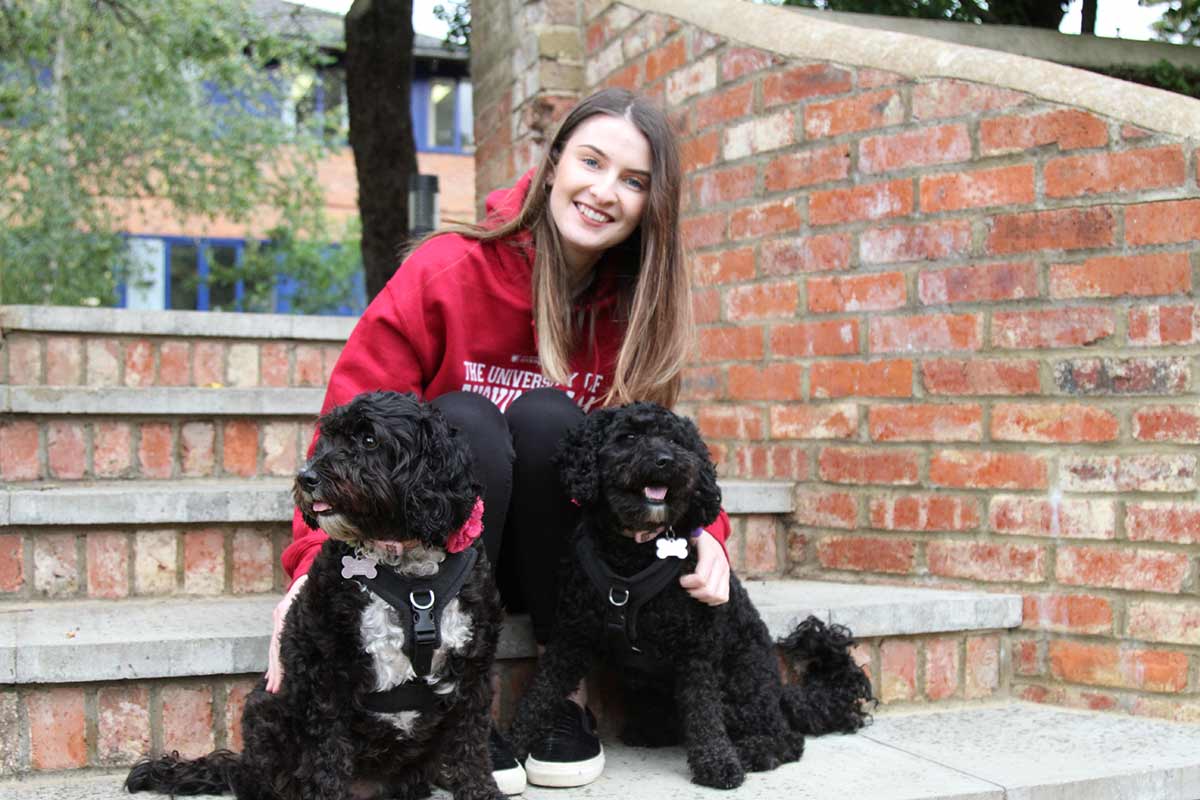 I believe that all educational institutions should consider having a therapy dog. Not only for pupils and students but for the staff’s wellbeing also. I have worked with the local secondary school and have taken both Millie and Darcie to meet pupils from years 7 -13 who absolutely loved meeting them.

I’ve also previously witnessed a wonderful interaction between Millie and Darcie and a young boy with nonverbal autism. When he met them his initial reaction was to scream with excitement, as he became more comfortable, he relaxed and started to say the word “dog” which he had never done before. He also mimicked them wagging their tales and giving him kisses, he changed within 20 minutes of meeting them which was very emotional for his father. Mille and Darcie were not fazed by this and just let him comfort and cuddle them, they showed no discrimination towards him something his father said he had been shown all his life from society, so do I think all educational establishments should have a therapy dog…… ABSOLUTLEY!