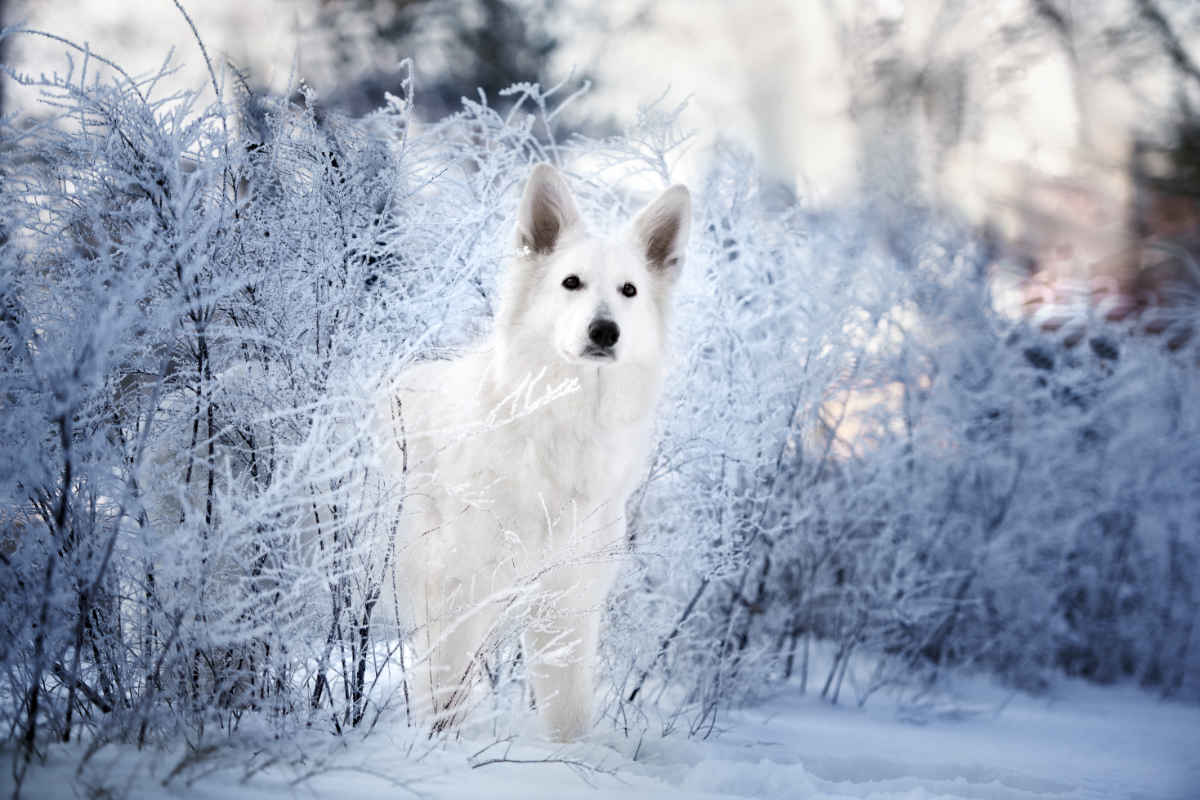 The White Shepherd is a variety of the German Shepherd.

They’re a direct descendant of the German Shepherd that were created by German calvary officer Max von Stephanitz in the 20th century.

Recognised by the UKC, the organization explains that the White German Shepherd fell out of favour in the 20th century which led to their exclusion from most German Shepherd breeding programs.

Although the German Shepherd is one of the most popular breeds in the USA, it’s not often you’ll encounter a White Shepherd because they still remain quite rare dogs.

Having said that, the White German Shepherd is a popular Google search term so it highlights there is an interest in this variety of GSD.

In this article, we’ll speak to Lumi’s owner Alyssa (@lumi_thewgsd) and Ash who owns a White German Shepherd called Ghost (@ghostwhitegsd) in order to shed more light on these dogs.

So with the introduction over, let’s take a deep dive into the White GSD.

What Is A White German Shepherd? 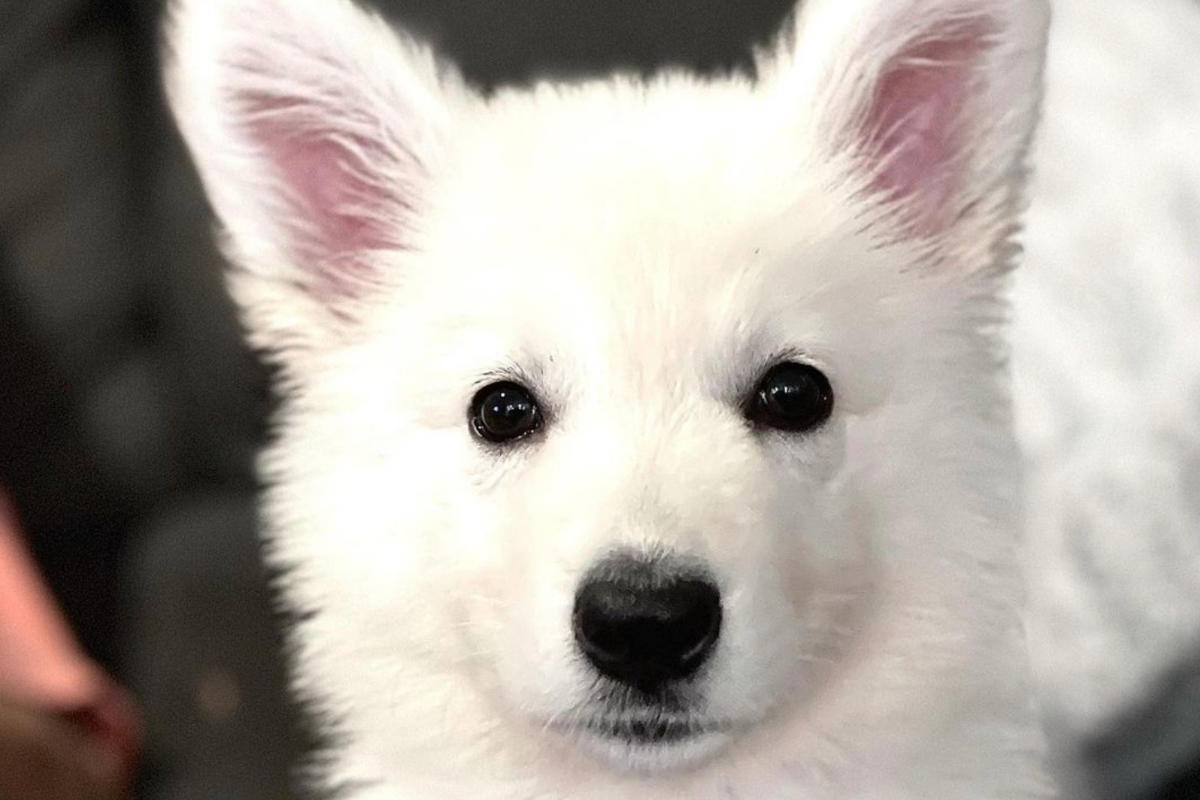 According to Wikipedia, White German Shepherds first appeared in Europe as early as 1882 before they were eventually banned from registration in 1933.

However, breeders in the USA and Canada kept this variety of GSD alive and a breed club was formed for White German Shepherds in 1969.

The White Shepherd has been recognised by the United Kennel Club since 1999.

Alyssa provided an excellent insight into White Shepherd and how they can be claimed by three different breeds.

The AKC German Shepherd, the UKC White Shepherd, and the White Swiss Shepherd (or Berger Blanc Suisse). It all depends on how they’re registered. The gene that gives a dog its “white” color is a recessive gene that both parents must carry. So if a White Shepherd breeds with a bi-colored Shepherd who doesn’t carry the white gene, the puppies will all come out colored. Lumi’s parents were both white and her whole litter was white as well. 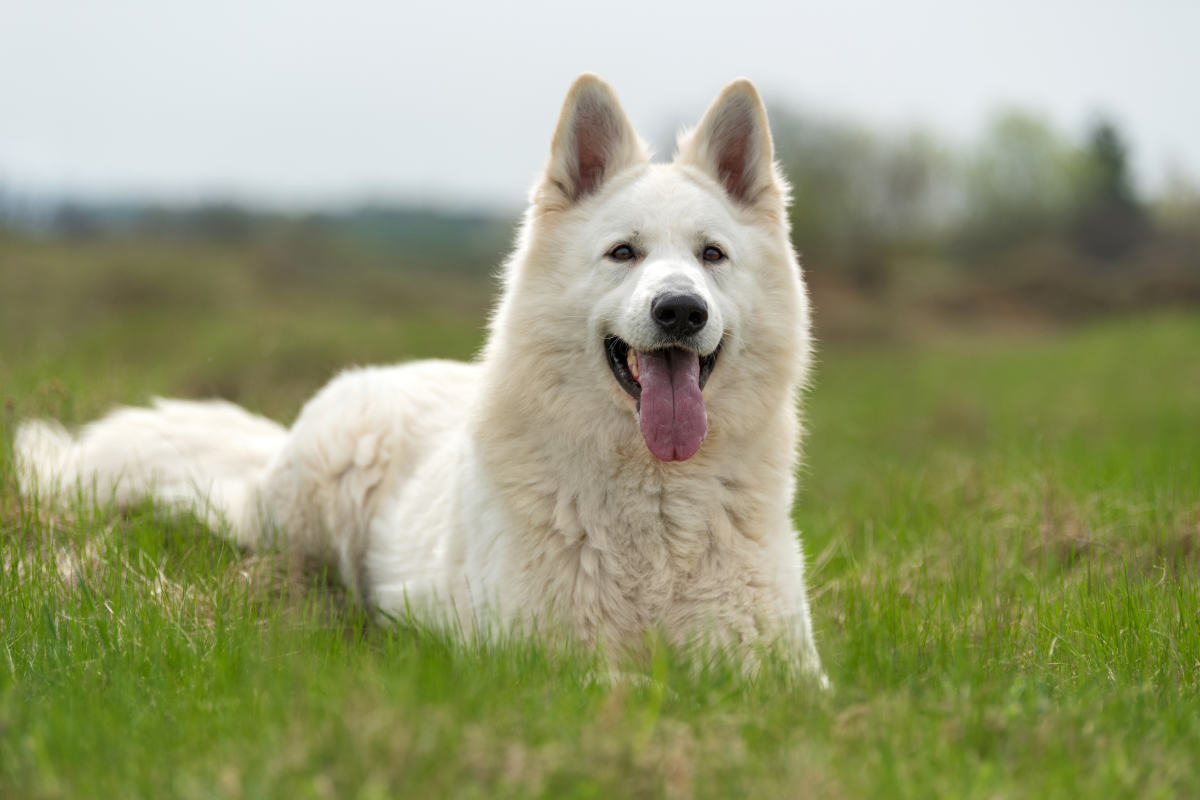 Here’s what the UKC has to say where general appearance of these dogs is concerned:

The White Shepherd is a medium-sized, well-balanced, muscular dog, slightly longer than tall, with a medium length, pure white coat, erect ears, and a low-set natural tail that normally reaches to the hock and is carried in a slight curve like a saber. The outline of the White Shepherd is made up of smooth curves rather than angles.

The White Shepherd should be evaluated as an allaround working dog, and exaggerations or faults should be penalized in proportion to how much they deviate from breed type; and how much they interfere with the dog’s ability to work. Working dogs are not to be penalized under any conditions for scars or blemishes that are due to occupational injuries. 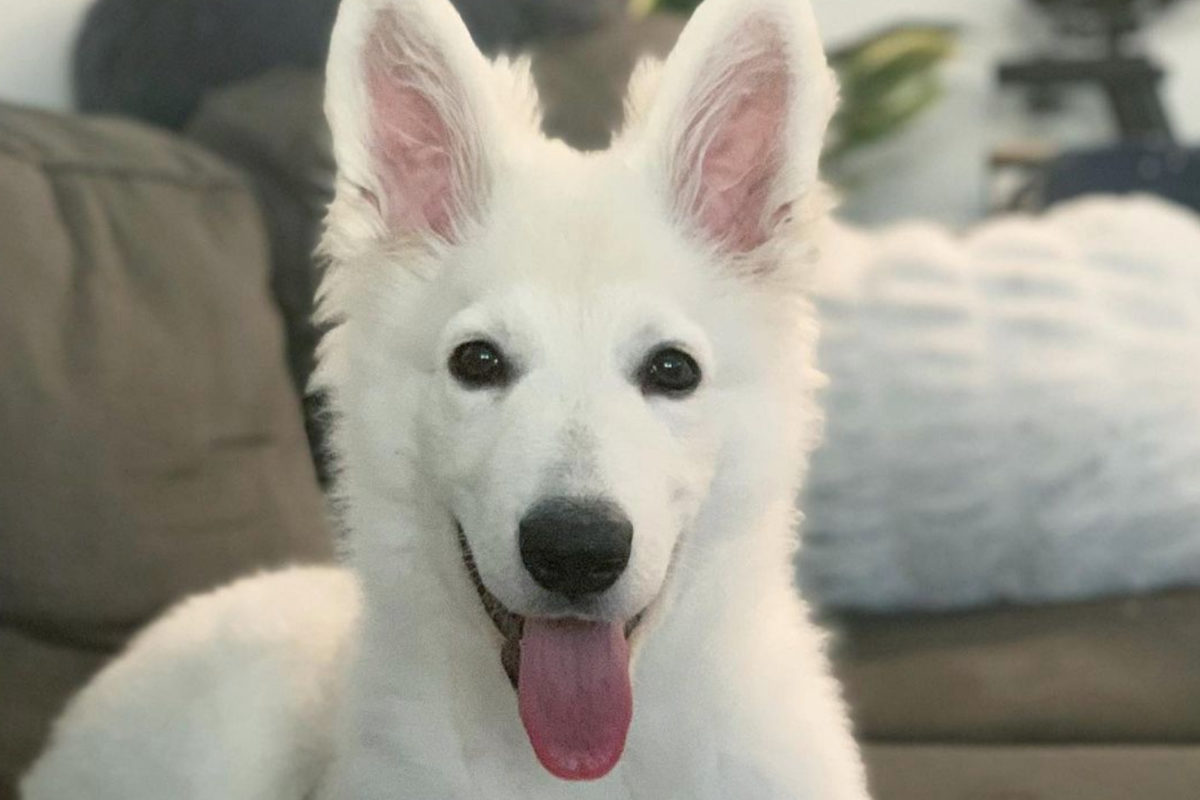 Alyssa revealed that a lot of White German Shepherds that she’s encountered have mellow personalities.

The temperament of White Shepherds all depends on breeding and can absolutely vary from dog to dog, however on average, they tend to be a bit calmer. They’re extremely loyal and intelligent like other German Shepherds but all of the White Shepherds I’ve met, mind included, have had more mellow personalities with a lower drive compared to your typical working Shepherd. Many of Lumi’s siblings have gone on to become service dogs because of their great temperament.

Ash supported this by revealing Ghost is a “chill” dog. 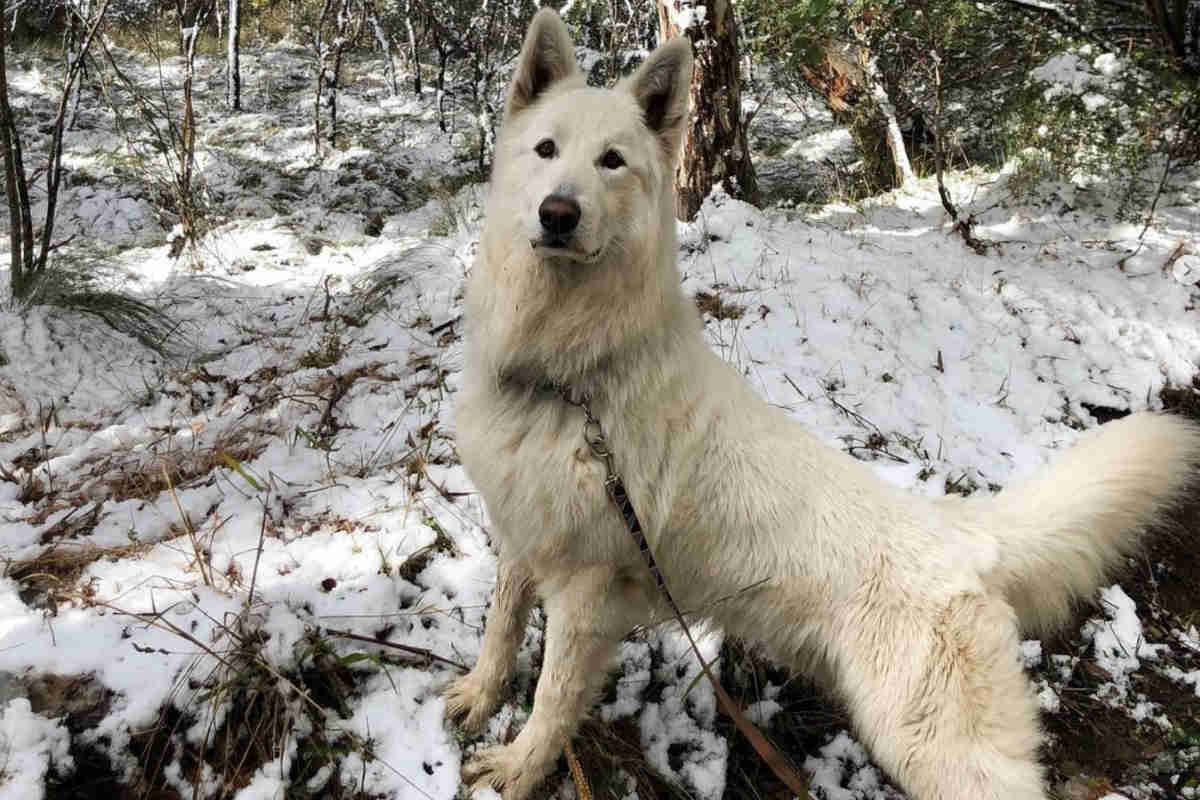 If you’re thinking about getting a White German Shepherd, you should be prepared to give them plenty of exercise and mental stimulation. They’ll need at least one walk a day of up to 60 minutes as well as some brain games to satisfy their high IQ.

While Lumi is a “low-energy girl”, Alyssa reckons most White German Shepherds will need a lot of regular exercise, especially if they’re young.

Exercise all depends on the drive and energy level of your dog. German Shepherds on average (White Shepherds included) need quite a bit of exercise. Lumi personally doesn’t need that much because she’s a low energy girl but we still do make sure to take her to the park once a day for play and running time and do at least one walk a day as well. One thing that many people don’t think about is the amount of mental stimulation a German Shepherd needs. They can get bored very easily so its important to keep their mind busy. We own quite a few treat puzzles that we use to keep our dog’s mind working hard. Training sessions also do a great job of keeping them mentally stimulated.

They have a lot of energy like any other German Shepherd they need a lot of exercise. Ghost sleeps a lot during the day but in the afternoon his energy kicks in. It’s very important to keep a German Shepherd’s mind busy, taking them outdoors into nature or a dog park is the best way to give them the mental and physical stimulation they need. As this breed is very needy and they can become very clingy from boredom if they do not use that german shepherd energy! 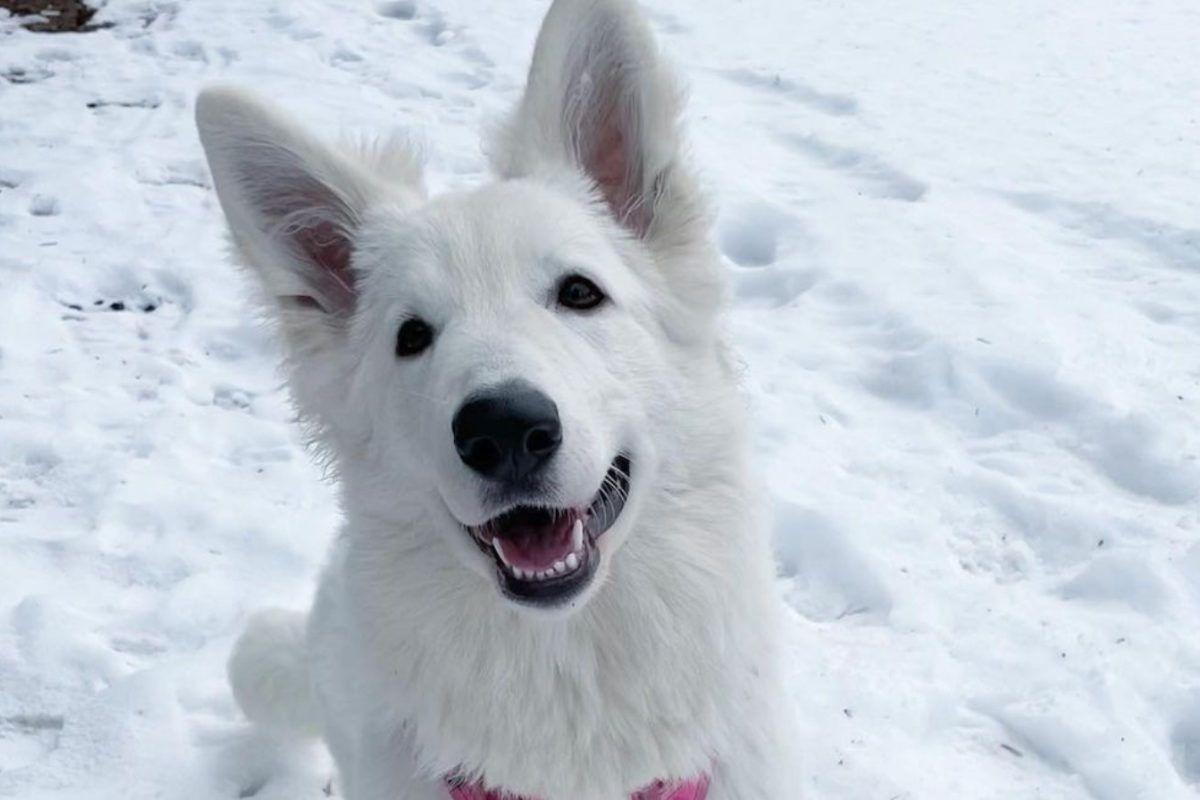 The Intelligence Of Dogs lists the German Shepherd as the third most-intelligent dog breed. So it’s highly likely that a White GSD will be a smart dog.

White Shepherds are incredibly smart. They’re very easy to train, however it takes consistency. They’ll pick up on things you teach them incredibly quick, but you need to continue to work on their skills. It is also typical as your puppy grows that they regress in some of the training they’ve already learned. Just keep at it and make sure to give lots of praise when they exhibit the correct behaviors.

The White Shepherd has a weather-resistant double coat with a straight, harsh outer coat and a thick, fine inner coat.

The only thing that is worse is that the fur is white! It stands out so much on your clothes, regular grooming and brushing is usually the best way to keep on top of it. I recommend at the beginning of spring to get your pooch groomed professionally. It just makes dealing with the fur a lot easier in the shedding season. 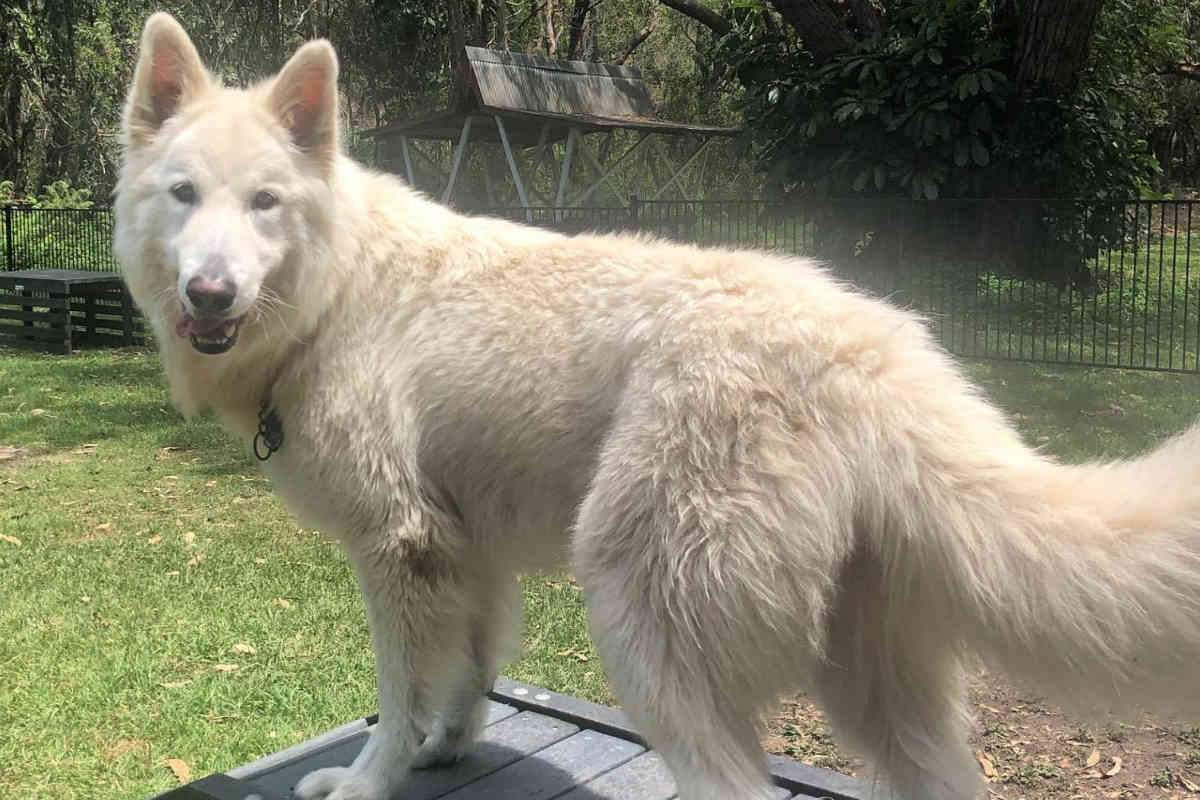 Let’s hear what our White German Shepherd owners have to say on this topic as they’ve got experience of their dogs in a family setting.

Alyssa described these dogs are “incredibly loyal” to their owners.

They love their families and will do anything to protect them. Because of this, they typically are a bit skeptical of strangers but this can be worked through with proper socialization and training.

The White German Shepherd is a little more timid and shy, are softer in the heart and they are not so aggressive. The German Shepherd is an excellent family and pet friendly dog, with the fun playful side for the kids and family to the hard working training for security for the home. This breed will have your back like no other. 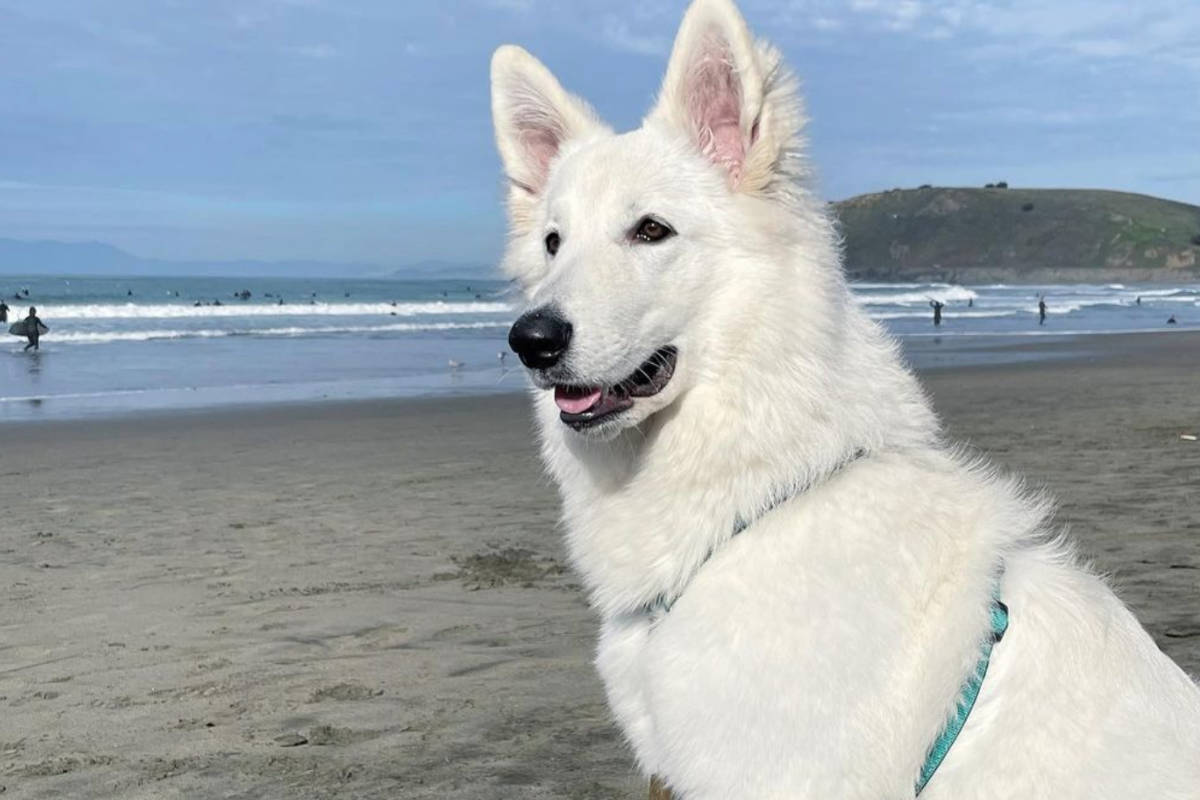 Separation anxiety is a chronic canine condition that can affect any dog irrespective of breed or mix. It usually occurs when a dog owner leaves their canine companion at home alone.

Alyssa believes members of the breed are susceptible to some separation anxiety.

White German Shepherds are prone to separation anxiety due to their love for their people. The severity of this can range from dog to dog and a lot can be genetics (some dogs are more anxious than others) but what I’ve found to be important is to start training young. Its hard to want to leave your cute new puppy alone but the work we did with Lumi at 8 weeks to get her comfortable on her own has carried through to today. 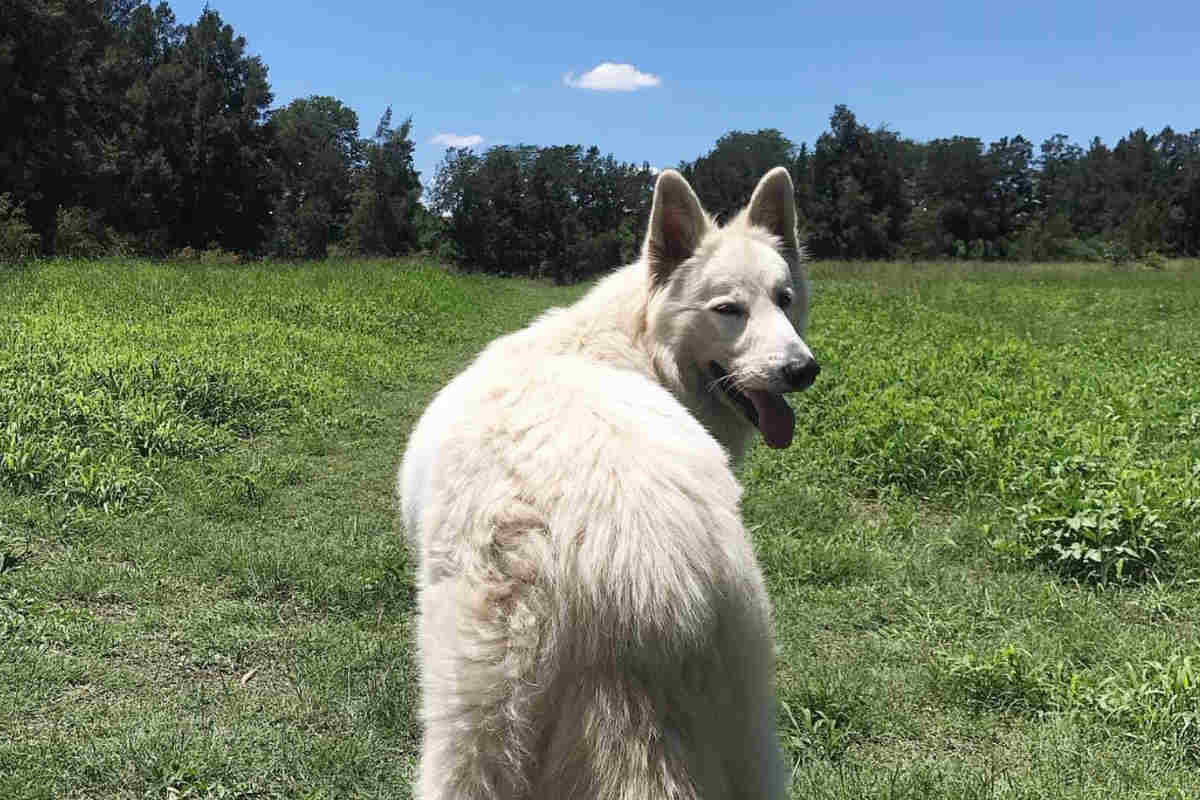 Alyssa warned that German Shepherds can be extremely fussy eaters.

German Shepherds are notoriously fussy eaters and tend to be prone to sensitivities. From my experience, White Shepherds are no different. Lumi wont eat her food unless we mix meal topper in (we like Stella & Chewy’s Magical Dinner Dust). She’s even picky with “human” treats we give her like carrots, blueberries or cucumbers.

This is a sentiment echoed by Ghost’s owner Ash.

Food is food right?! WRONG not according to some White German Shepherds, they will eat your socks but don’t you dare give them anything that’s not high quality! Once your White German Shepherd gets a taste for the finer things in life you will be ruined! My breeder fed him raw mince, so I decided to keep him on a RAW diet. I change it around sometimes from meaty bones to livers and giblets, it is all about knowing what exact meats to give your dog on this diet, like anything else you need to do your own research on whats best for you and your pooch.

How Much Do White German Shepherds Cost? 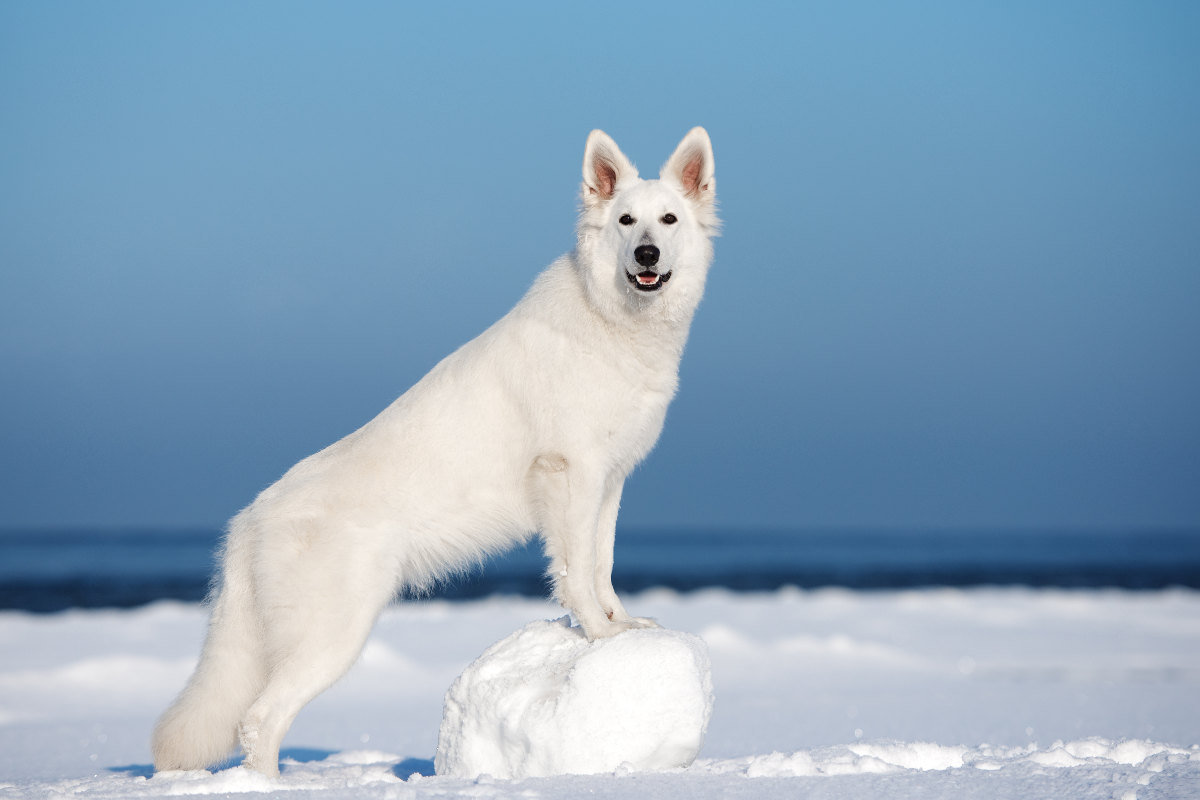 Alyssa outlined that White German Shepherds will usually cost around $2000.

The cost of White Shepherds can vary quite a bit, especially when taking location into consideration. We live in California and from my research, AKC registered German Shepherds were around $2000. The white color didn’t cost more or less with our breeder. 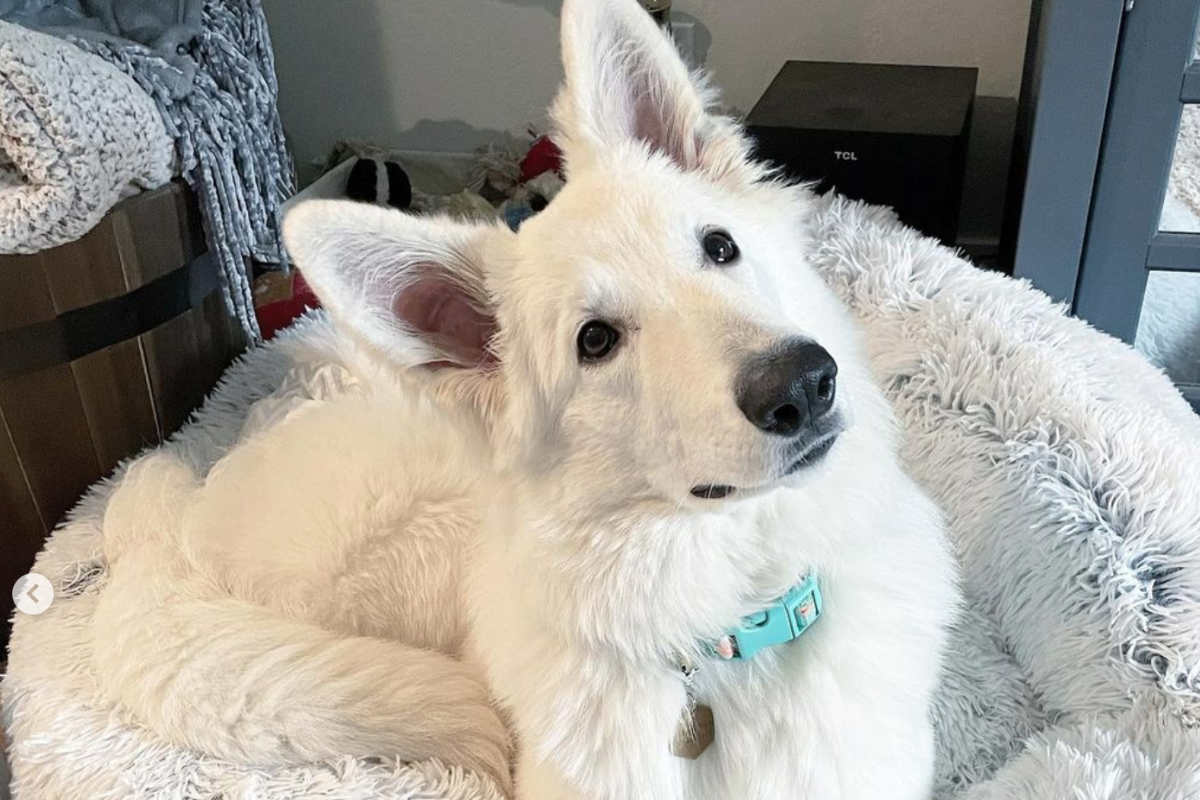 Lumi/Alyssa: “Make sure you do your research to find a responsible breeder. The goal of any breeder should be to better the breed and ensure you’re matched with the perfect dog for your lifestyle and needs. Be smart about the dog you choose to bring home and make sure their personality matches your lifestyle.”

Ghost/Ash: “My advice is always look at adopting from a shelter or pound first. Other then that if you are looking for a breeder make sure you do some research. I have grown up with the standard colour German Shepherd my entire 26 years of life and when I got my first White German Shepherd I did notice a slight difference. I made sure to do my research on the breed, what the dog needs. I do not recommend getting any type of German Shepherd if you are not ready for the hard work they require. They are very hard work sometimes and very stubborn but also so so rewarding.” 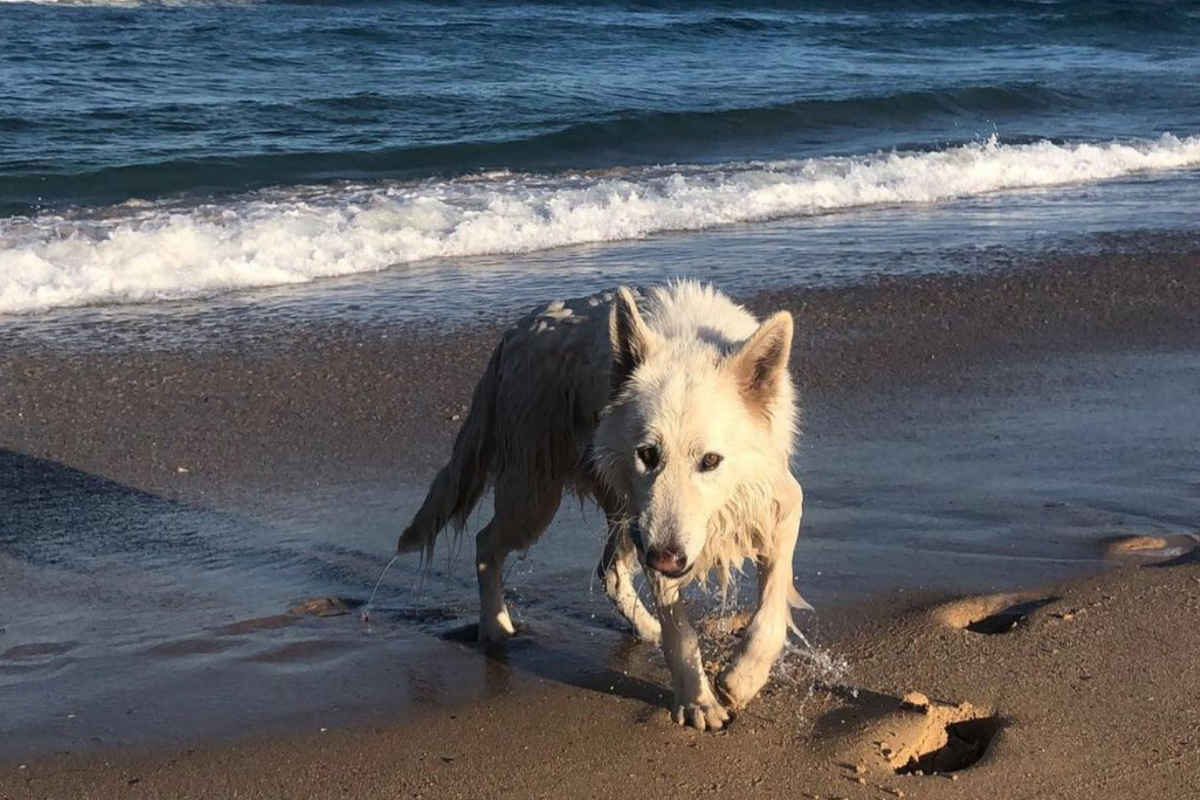 If you’re looking to learn more about White German Shepherds, you could always follow some members of the breed on social media to learn more. So you can always give Lumi (@lumi_thewgsd) and Ghost (@ghostwhitegsd) a follow. 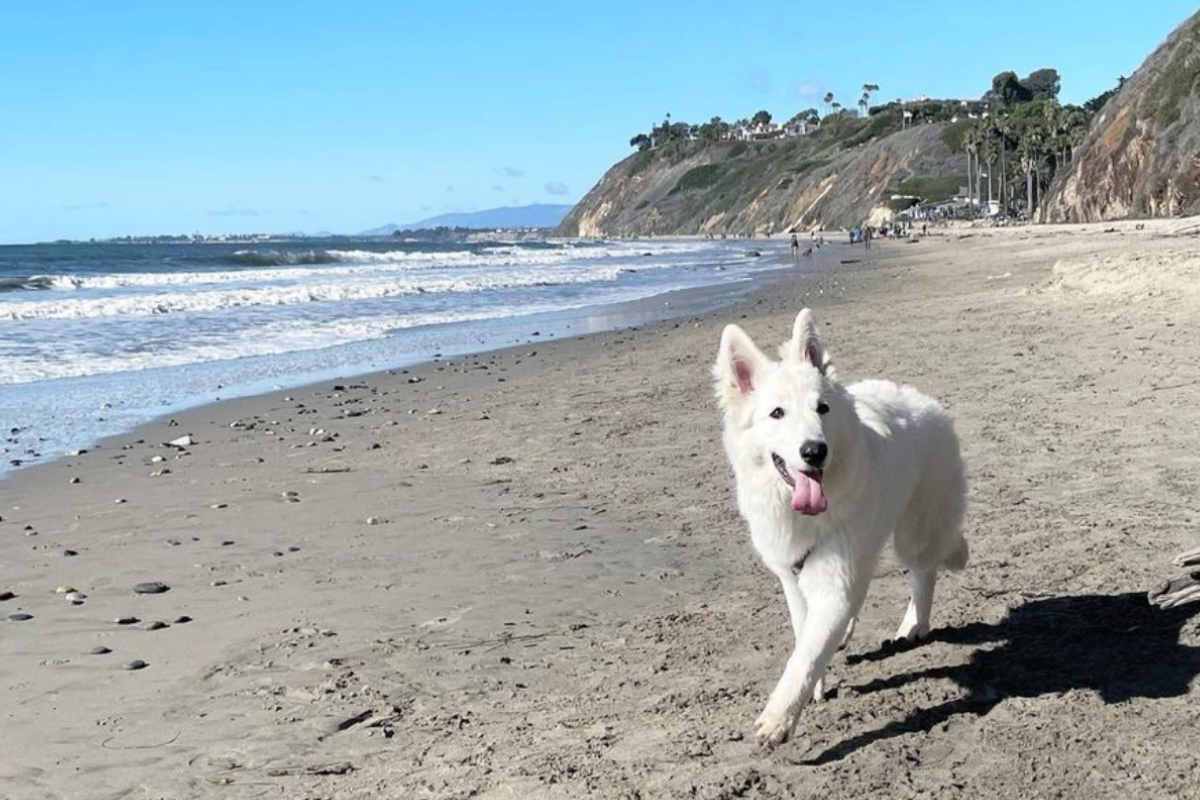 We’ve reached the end of our feature on White German Shepherds.

They’re effectively just a German Shepherd dog with a white-coloured coat. Having said that, it’s a highly Googled variety of GSD so we wanted to shed further light on these white dogs.

As we’ve covered above, White German Shepherds are highly intelligent dogs who need a lot of exercise to keep them physically and mentally stimulated. While they’re quick to pick up new tricks, they require consistent and persistent training.

White German Shepherds will shed a lot so you should be prepared to brush your dog regularly as well as have a lint roller close by at all times to remove white fur from your clothes.