What are Alaskan Klee Kai mixed with? 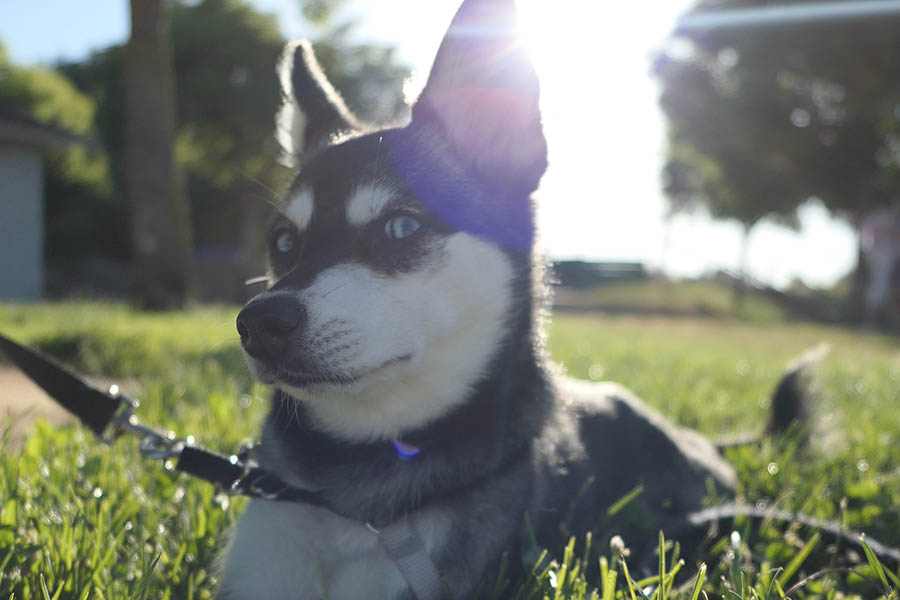 Klee Kai are often confused for other types of dogs such as a Pomsky or a Mini Husky. But Klee Kai are purebred unlike the aforementioned dogs.

There have been over 15 generations of UKC-registered Klee Kai.

Created in the 1970s as companion dogs, AKK remain a rare dog breed but have grown in popularity over the past decade or so.

The breed originated in Alaska but Alaskan Klee Kai can now be found in most parts of world.

To get a better understanding of these unique dogs, we need to take a look at how the breed started and what dogs were initially used to create the Alaskan Klee Kai.

The Alaskan Klee Kai is a companion sized dog often referred to as a smaller version of their northern ancestors, the Alaskan Husky. While they do have many northern breed traits, they are a very unique breed with individual quirks and temperaments.

As we mentioned above, Alaskan Klee Kai are a breed recognised by the United Kennel Club, who have set out a breed standard for these small-to-medium companion dogs.

The Alaskan Klee Kai was created by an American lady called Linda Spurlin in the late 1970s.

She came across a 17 pound female husky when visiting family in Oklahoma. Spurlin was enamoured with the dog and brought her back to Alaska.

Aptly named Curiosity, the dog attracted a lot of interest due to her small size and stature. The degree of attention that Curious received motivated Spurlin to recreate Curious.

In a twist of fate, Spurlin’s brother in law who lived in Alaska had an accidental mating between an Alaskan Husky and a smaller dog, which led to to another mini Husky.

She bred a couple of “curiosities” before the brother in law decided to sell his little dogs to Spurlin and so she began her breeding programme.

However, she initially had no intention of opening up her breeding programme but a woman from Colorado who met these dogs convinced Spurlin that “the world needed these little dogs”.

AKKAOA president Beider explained Spurlin’s process of developing Klee Kai in her interview with helloBARK in 2019:

The Spurlins carefully selected dogs who met their high standards for appearance and soundness.

In 1987, she sold her first dog to a friend before Spurlin settled on the name Alaskan Klee Kai for these little dogs.

Writing on the Alaskan Klee Kai Association of America’s website, Spurlin says these dogs were initially bred to be companion dogs but her stance had to be revised when owners expressed a desire to show these dogs.

The breed has since achieved full recognition by the Federation of International Canines, the American Rare Breed Association, Canine Rarity Shows and of course the Alaskan Klee Kai Association of America.

Alaskan Klee Kai were created to be a small to medium-sized dog. The breed has three different sizes: standard, miniature and toy.

Alaskan Klee Kai are measured by height rather than weight. They’ll usually weigh between 15lbs and 20lbs. The AKKAOA add that there aren’t a lot of pups going oversized (over 17 ½”) but there are still some.

The breed come in three different colors as set out in the breed standard: black and white, gray and white and red and white. However, the AKKAOA’s website says there are some white (accredited to the American Eskimo Dog) and dark (accredited to the Schipperke) Alaskan Klee Kai.

Coat colors in shades of black, gray or red are acceptable provided that the facial mask is distinct and clearly visible, and there is a contrasting lighter color on the bottom half of the dogs face, throat, chest, breeches, feet, legs and underside.

Before we go any further, remember Alaskan Klee Kai are purebred dogs and you only create a Klee Kai by breeding to UKC-registered Klee Kai.

While the Alaskan Husky is not officially recognised as a pure breed, this dog has achieved worldwide fame for their sled-pulling ability. They can differ in size and weight depending on whether they are racing or working dogs. Their history can be traced back to an Indian dog used by the people of interior Alaska. Genetic studies have shown the Alaskan Husky does share similarities with the Alaskan Malamute and Siberian Husky.

When dog sled racing began to become a profitable occupation, the Alaskan mushers started to develop the little village Indian dog into the Alaskan Husky as it has become known in modern society.

Spurlin describes the Alaskan Husky as “the ancestors” of Alaskan Klee Kai.

The Siberian Husky played a role in the creation of the Alaskan Klee Kai breed. These dogs arrived in Alaska from Russia at the turn of the 20th century and played a big role during the Gold Rush.

A Siberian Husky named Balto – as well as 150 other sled dogs – achieved notoriety in 1925 during the famous Serum Run (Great Race of Mercy), which Disney turned into a film in 1995. The journey of 674 miles helped to save the town of Nome and the surrounding communities from an incipient epidemic. Siberian Huskies managed to establish themselves as the supreme sled racing dog during the first half of the century.

Their distinctive markings made the breed immediately recognisable. Siberian Huskies are slightly smaller than the Alaskan Husky. Spurlin used a small amount of Siberian Husky in her development of the Alaskan Klee Kai breed.

While the Alaskan Husky and Siberian Husky are both racing and working dogs, Alaskan Klee Kai were bred to be a companion dog. Spurlin used American Eskimo Dog to bring down the size of her breed. They started in northern Europe as various German spitz breeds. Immigrants moving to United States brought their dogs with them and the name was eventually changed to American Eskimo Dog due to anti-German sentiment. They come in three different sizes: toy, mini and standard (just like the Alaskan Klee Kai). Like the AKK, these all white dogs can sometimes suffer from luxating patella and hip dysplasia.

The final breed that Spurlin used to refine the Alaskan Klee Kai was a Belgian dog called Schipperke. While the literal translation of the breed name means “little boatmen”, these dogs are more commonly known as “little shepherd”. Schipperke’s average height is between 31.2 cm (12.3 in) and 33.6 cm (13.2 in), while their average weight is 3–9 kg (6.6–19.8 lb).

The Alaskan Klee Kai was officially recognised by the American Rare Breed Association (ARBA) in 1995 and by the United Kennel Club (UKC) on January 1997. The breed is still be registered with the American Kennel Club (AKC) and the Kennel Club (KC) in United Kingdom.

10 things to consider before getting an Alaskan Klee Kai