Top 20 Most Popular Dogs In UK

A 2019 survey in Great Britain unearthed the nation’s most popular dog.

ITV carried out a survey of 10,000 people in their quest to find the United Kingdom’s favourite pooch.

Britain’s Top 100 Dogs was revealed in January 2019 in a television show hosted by Sarah Cox and Ben Fogle.

While the Kennel Club rank the most popular breeds in UK, they don’t take into account certain mixes or rescue pups.

You may think of the Bulldog, the Cavalier King Charles Spaniel or Beagle as quintessential British dogs.

However, the top 20 provided some surprises as the British public gave their verdict on the nation’s favourite pooch.

So without further ado, helloBARK! will breakdown the UK’s 20 most popular dogs.

One of the most recognisable dogs in UK. The Jack Russell Terrier is a favourite of the British household. Reverend John Russell was responsible for creating and developing these little Terriers. The breed was used during fox hunts in the 19th century but nowadays make great companion pets. They have three different coat types and usually have white with markings that are tan or black, or both.

Another dog that stands out is Doberman Pinscher. With muscular frames sets against a tight coat, these German dogs are slim but powerful. It’s no wonder they’re so often used by the army and the police force. However, they make great guard dogs and are very loyal within a family environment. Their magnificent coat can be black, blue, red, or fawn, with rust markings.

Like the Doberman Pincsher, the Dachshund is a German dog. At the other end of the size spectrum, these small pups are often given the nickname Sausage Dogs. Their popularity took a hit during World War II when they were used in propaganda. However, the Dachshund is a universally loved dog in the 21st century.

Popular with celebrities such as former US president Dwight Eisenhower, actress/princess Grace Kelly and footballer Hector Bellerin, the Weimaraner continues the German theme in this list of best-loved dogs in Britain. Often described as the “grey ghost”, the AKC highlights their key traits as “friendliness, obedience and beauty”.

Bred to hunt badgers, foxes and otters, the Welsh Terrier is a rugged and versatile member of the Terrier group. They sport a black and tan coat with a jaunty beard, which makes the breed easily identifiable. Their history can be traced back to the 1700s.

A mix between a Cavalier King Charles Spaniel and Bichon Frise, the breed isn’t officially recognised by the Kennel Club or American Kennel Club. However, they’re one of the most popular types of dogs in the United Kingdom. Their low shedding coats make them a good option for dog lovers who are allergic to dogs.

Not a breed that springs to mind when thinking of well-known dogs, but the Dandie Dinmont Terrier is the 14th most popular dog in Great Britain. A member of the Terrier group, these dogs have adapted well to city living. They do well in apartments and are perfect for dog owners will limited time for walks as they require just 30 minutes of exercise twice a day.

The Labradoodle is a cross between a Labrador Retriever and a standard, miniature or toy Poodle. These dogs don’t shed a lot of hair, so they’re could be suited for allergy sufferers. Given both the Labrador and Poodle are ranked amongst the most intelligent breeds, it’s no surprise that the Labradoodle is considered a highly trainable dog. 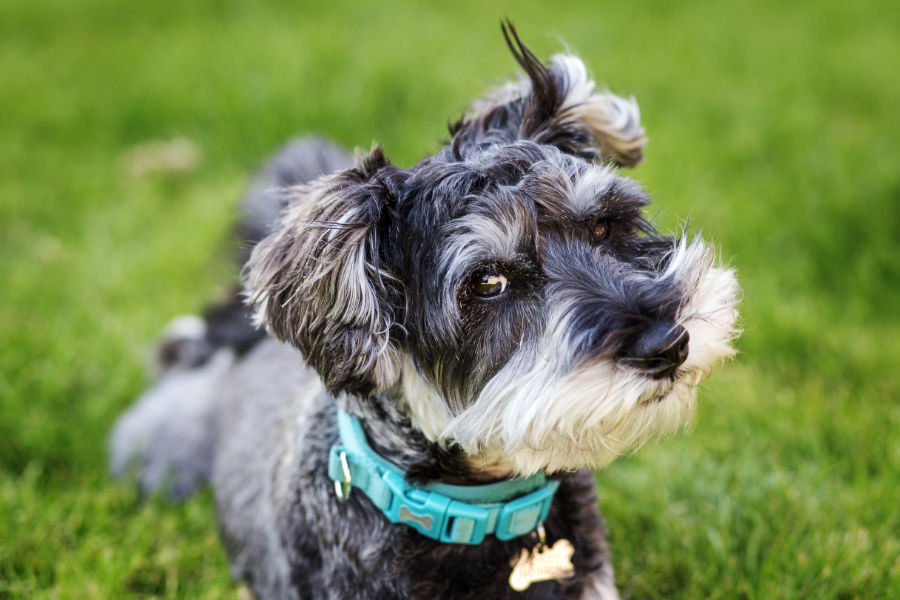 The fourth German breed to feature in the top 20 most popular breeds in UK, the Miniature Schnauzer is the smallest of the three Schnauzer sizes. With a friendly personality, the AKC describes these dogs as “a generally healthy, long-lived, and low-shedding companion”.

Described by dog experts as the “Peter Pan of the Sporting group”, Flat Coat Retrievers are known and loved for their effervescent personalities. Their trademark flat coat comes in either black or liver. They’ve earned a reputation for being very happy and eager to please dogs.

According to Dog’s Trust, over 130,000 dogs arrive at British charities for rehoming each year. That’s a lot of pups looking for their forever homes.

It’s no surprise to see the Golden Retriever make the top 10 most popular dogs in Great Britain. The breed originated in Scotland but are loved around the world. They do important work as guides for the blind, while they can assist trained professionals in search-and-rescue missions. They’re loving nature makes them a popular family dog.

The third-most intelligent breed in the world of dogs, the German Shepherds are quick to learn new commands and eager to please their owners. You’ll find lots of German Shepherds working in the police force, but they’re a popular choice for a guard dog or family pet.

The smartest dog in the world, the Border Collie requires a lot of stimulation to keep them happy and motivated. They have a reputation for being great working dogs. Loyal to their owners, these dogs will still relax with their humans after a long day of work.

Sometimes described as the quintessential family dog, the Boxer is much loved in the United Kingdom. Indeed, the AKC describe the breed as “the whole doggy package”. They’ve got big personalities with a happy and silly disposition but Boxers are loyal and protective of their family members.

The Cocker Spaniel wins over hearts with their cheerful appearance. Their tails rarely stop wagging, while they have big, inviting brown eyes and extravagant, lush coats. The Cocker Spaniel has always been one of the world’s most popular dogs, stretching back as far as 1930s.

Like the Cocker Spaniel, the English Springer Spaniel has a cheerful appearance. They’ll bring a smile to your face! The Springer Spaniel was used to recover birds from the water as early as the 17th century. Regular grooming is required to prevent their long coats from becoming matted and tangled.

The Cockapoo is a mix between a Cocker Spaniel and a Poodle. Often described as a “designer breed”, these dogs started to appear in 1960s. The Cockapoo is an intelligent dog that is easy to train. They don’t hold grudges and are quick to forgive. It’s easy to see why these friendly dogs rank second.

With the common perception that these dogs are aggressive, you may be surprised to see the Staffordshire Bull Terrier rank as Britain’s most popular dog. The AKC’s website dispels this myth and highlights how the breed has evolved in the 20th and 21st century: “good breeding transformed this former gladiator into a mild, playful companion with a special feel for kids”.

20 Most Popular Dog Breeds In USA