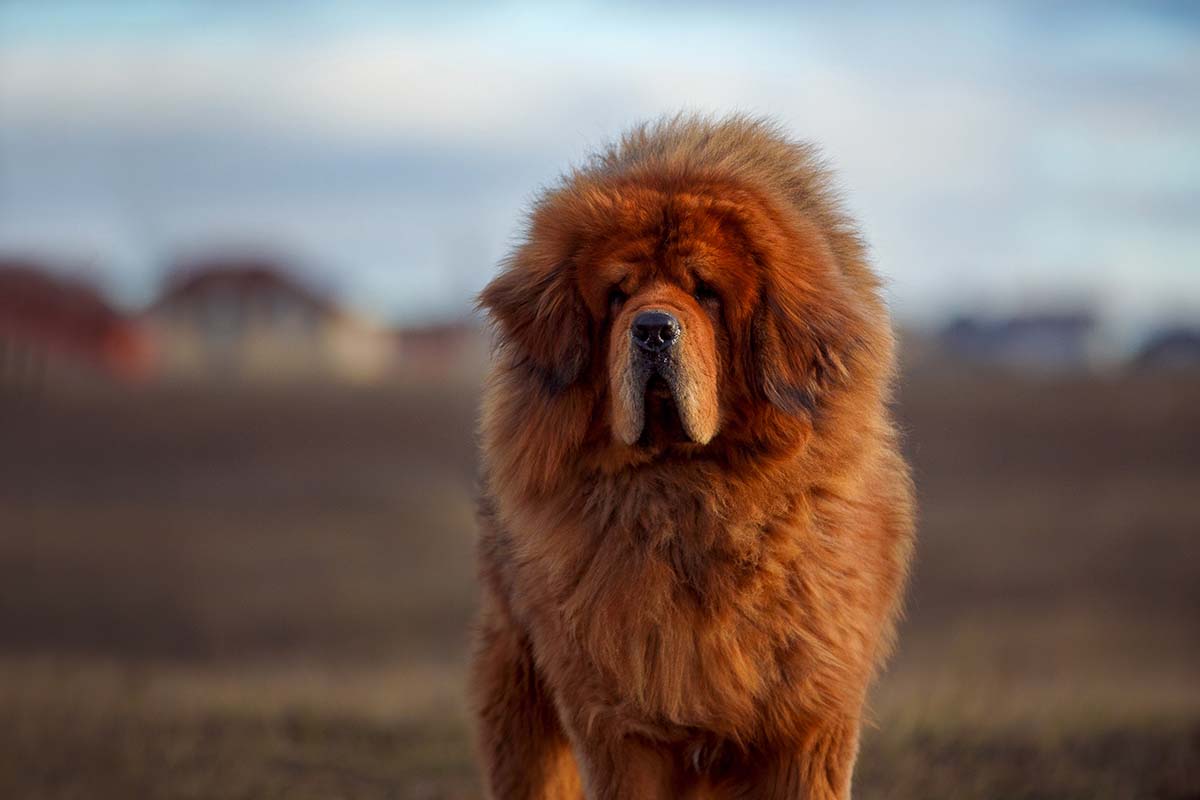 By Kieran Beckles
Updated on 3 November 2022

Are you thinking about getting a Tibetan Mastiff but you want to learn more about the pros and the cons of the ancient dog breed?

The Tibetan Mastiff is a dog breed that traditionally functioned as a guardian dog but a devoted member of the family.

They’re currently rated as the 147th most popular dog breed in the USA since being recognised by the American Kennel Club in 2006.

Tibetan Mastiffs are usually described as “powerful”, “muscular”, “massive” and “substantial”, according to the dog organization.

In this article, we’re going to take a look at the Tibertan Mastiff pros and cons, examining some of the advantages and disadvantages of the Asian dog breed.

We’ll hear from Jamie who owns a Tibetan Mastiff called Ted (@ted.thetibetan) to learn more about this intelligent and independent dog breed. 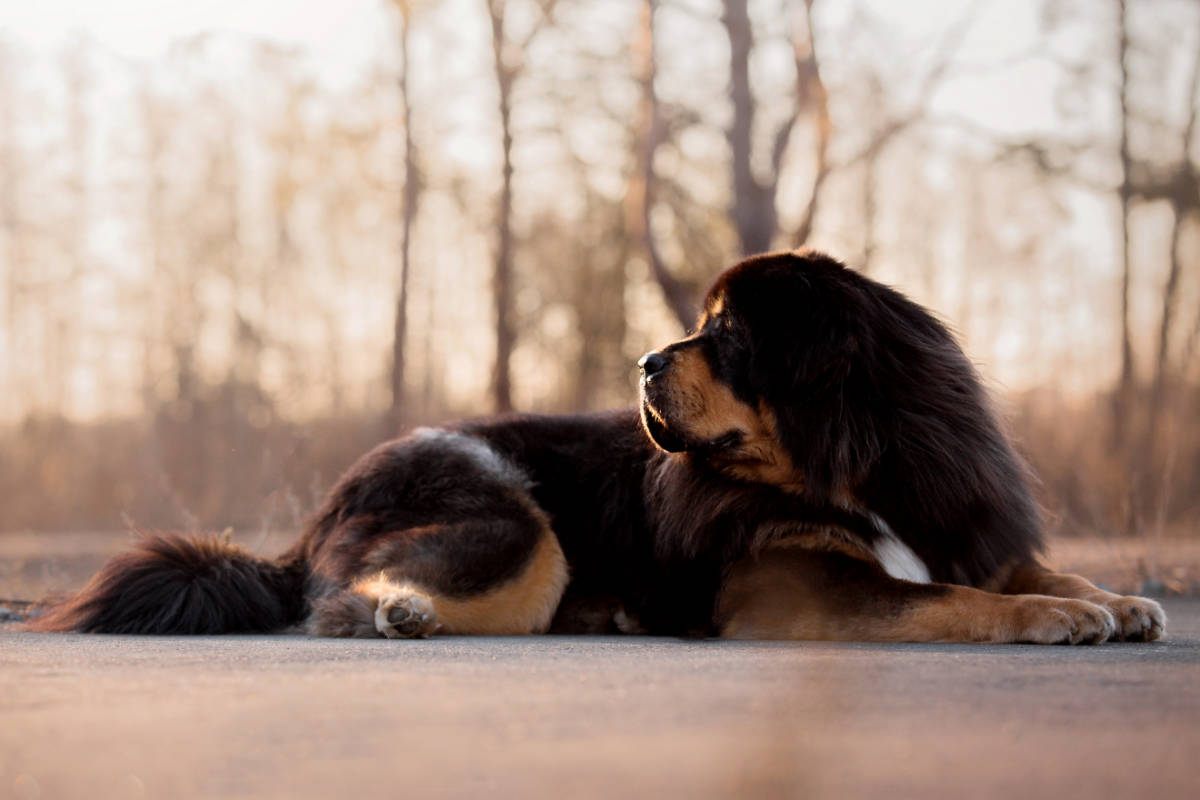 If you’re thinking about getting a Tibetan Mastiff, you’ll need to be prepared for a lot of attention and ready to field a lot of questions. The sheer size and striking appearance of these ancient dogs will attract admirers.

Being a very rare breed it’s hard to walk down a street without people wanting to stop you and stroke Ted. He loves the attention but people don’t see Tibetan mastiffs very often so we have had our photos taken quite often by random people.

The Tibetan Mastiff is considered a dog breed that has a strong independent streak. Indeed, the Tibetan Mastiff’s breed standard outlines that these dogs are highly intelligent, independent and strong willed. It’s a good idea to start training your Tibetan Mastiff from a young age otherwise you may find it difficult to handle a large, unruly dog. Their independent personalities isn’t necessarily a negative.

Jamie explains why she considers Ted’s independence to be a good thing.

Being as lovable as he is towards us he is still very much independent and will happily lie in the garden all day without needing to be fussed by us at all. This is great for us as we both work so he is happy to be left alone during the day and will usually just sleep.

Tibetan Mastiff don’t need a lot of exercise on a daily basis. While you can take your Tibetan Mastiff for a couple of daily walks, you may want to consider other forms of organized activity. The AKC write online that Tibetan Mastiffs could enjoy work-related tasks, such as patrolling their territory.

Tibetan Mastiffs are known to sleep for around 16 hours a day however Ted is probably closer to 18. Due to his size he requires around 2 x 15 minute walks each day which is about his limit as he gets tired easily. When people come to visit his isn’t boisterous at all and will usually greet people very calmly and he is very good with kids and is very gentle but sometimes he forgets how big he is. 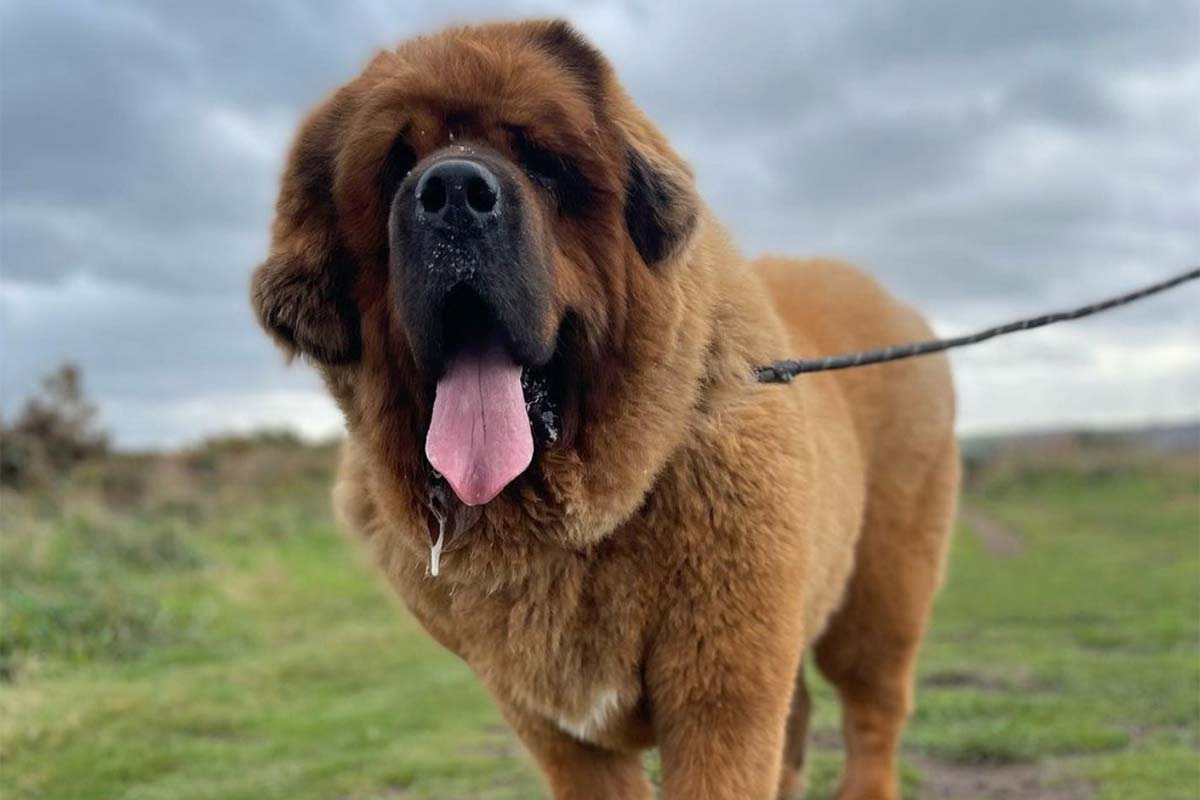 If you’re looking for a loyal dog breed to be by your side, the Tibetan Mastiff is a good candidate. Once they develop a bond with their pet parents, they’ll likely stick to their owners and become a velcro dog.

As much as he is an independent dog. He is very loyal towards us as his owners. He will greet us every time we come home and will stay by our side until he is ready to sleep again. When we leave the house he will stick by our side like glue especially when we walk around busier areas like town or markets. Even when let off lead he will stick close to us and always turn round to check where we are.

The Tibetan Mastiff is described as a “guardian dog supreme” by the AKC. They’re devoted to their fellow family members but reserved and territorial with people they don’t know. Their sheer size should be a sufficient deterrent for any unwanted visitors to the home. With a large bark, anyone foolish to take on the Tibetan Mastiff would soon be outed.

Tibetan Mastiffs being bred as working dogs their primary job was to protect livestock. Now I don’t have any livestock in my house but to Ted our house is his farm and he will protect it. He can often be seen patrolling around the fence line (when he is not sleeping). He would certainly look imposing to any would be burglars and will defiantly use his loud bark to his advantage.

Should you decide to get a Tibetan Mastiff, you’ll likely be the only owner – or one of a few – in your local area. These ancient dogs aren’t common so some dog owners like Jamie consider this to be a perk of the breed.

Being a very unusual breed you do not see many Tibetan mastiffs around so that is defiantly a plus. He certainly isn’t your typical dog and you can almost guarantee you wouldn’t bump into another one on your walks around the park.

Although the breed standard outlines that these dogs should be aloof and reserved with people that they don’t know, the Tibetan Mastiff can warm up to new people and new dogs with controlled socialization.

Jamie shared some of her experiences socializing Ted (@ted.thetibetan).

Once Ted has been introduced to new people he is great with them and will happily let anyone stroke him when we are out and about. Even with new dogs he will have a sniff and happily let them sniff him back with no issues. Other dogs tend to be quite intimidated by his size and he has be snapped at a few times by dogs trying to show him who’s boss but he shrugs it off and walks away. 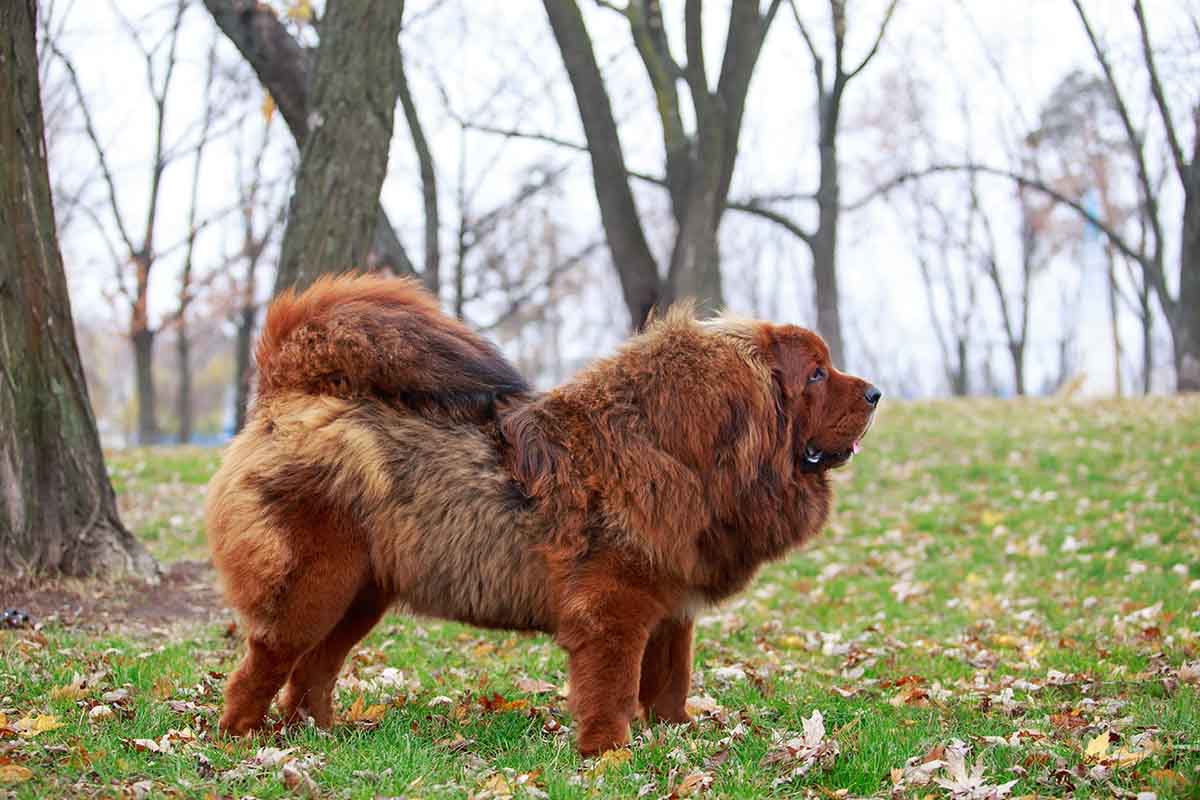 You probably won’t be surprised to learn that Tibetan Mastiffs can be stubborn at times. As these dogs are independent and strong willed, it can be a challenge to convince these large canines to do your bidding. Even with extensive training, Tibetan Mastiff will sometimes decide to be uncooperative.

Jamie reveled one particular area where she struggles with Ted

Ted is defiantly the most stubborn dog I have owned if he doesn’t want to move or do something good luck getting him to do it. It’s not due to lack of training or disobedience it’s just be really cannot be bothered. Trying to get him to come in from outside is one of the hardest tasks of the day as he would rather stay out there 24/7.

Tibetan Mastiffs can range from 24 inches to 29 inches at the withers and weigh from 70 pounds to 150 pounds. These huge dogs are ideal protectors of the home but their size can be a hazard. For instance, they can inadvertently knock over smaller members of the family or furniture. But there are some other consequences – too.

Jamie explained some ways that Ted’s size is a disadvantage.

One thing you can’t ignore is Ted massive size. Weighing around 75kg good luck trying to lift him into the back of your car. He is defiantly not a lap dog and will take up half the sofa if he decides to join us. Due to his size he also needs a lot of feeding so be prepared to have a hefty food bill not to mention all the extra treats. 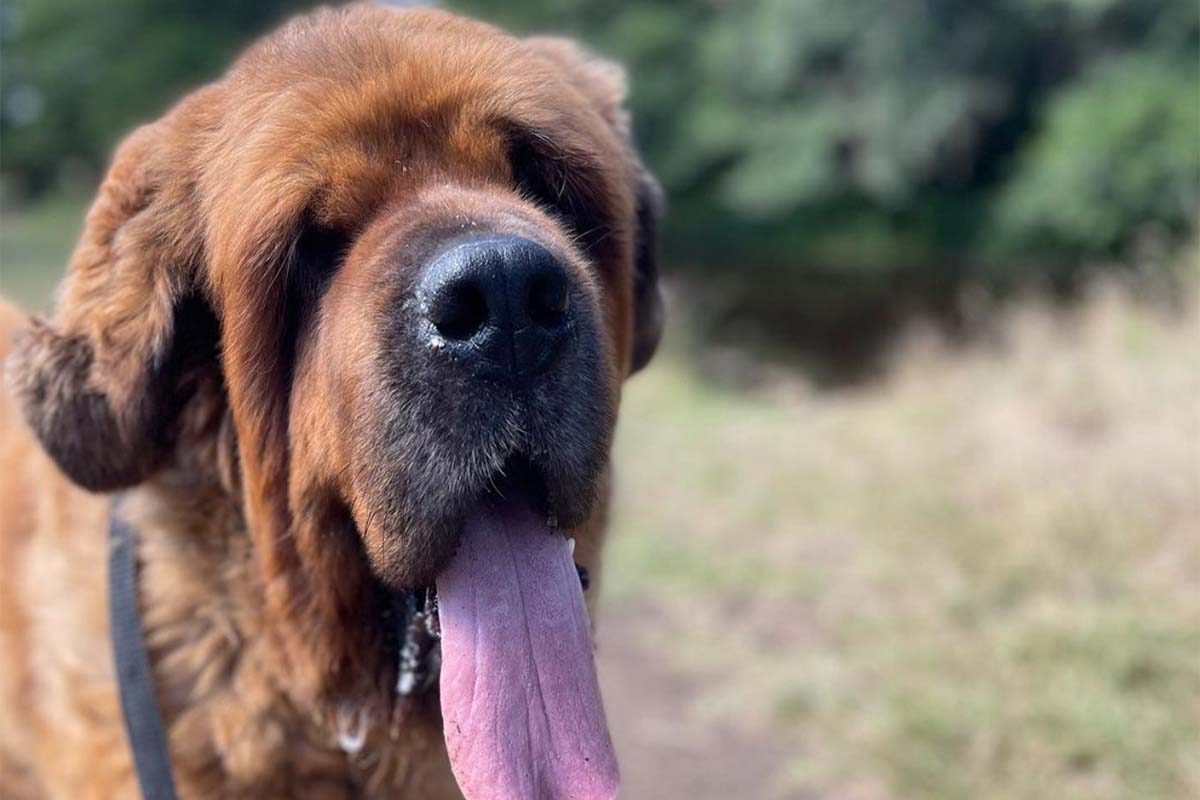 If you don’t like drool, Tibetan Mastiffs probably aren’t the right breed for you. These large dogs drool a lot so you should be prepared for your fair share of slobber on your clothes and furniture. It’s part of life owning a Tibetan Mastiff.

Ted does have loose jowls so slobber is a constant issue in our house. We always have a towel on standby to catch any before he decides to shake it off and trust me it will hit places you would never think of. Ted does wear a bib when we take him out as he has a habit of covering everyone else in his drool.

Tibetan Mastiffs are moderate shedders throughout the year. They’ve got a double coat with a heavy, wooly undercoat and a coarse, guard outer coat. Once a year, they’ll blow out their undercoat. This can be a particularly challenging time of year to be a Tibetan Mastiff owner. You’ll need to brush your Tibetan Mastiff daily during the shedding season.

Tibetan mastiffs have a double coat so they do require regular grooming and they shed a lot of fur! We brush Ted around 2-3 times a week ourselves and he gets a professional groom every 6-8 weeks to keep on top of his very thick fur.

We’ve already referenced a Tibetan Mastiff’s bark earlier in this article. While their loud voice can serve a purpose when it comes to deterring burglars or visitors with ill intentions, it can become a problem if your Tibetan Mastiff is barking 24/7.

Ted has a very loud bark and he will use it a lot! When he is at home any strangers or unknown objects that come back the house will get a warning bark and believe me it booms around the house. He is not aggressive at all but will make sure anyone approaching the house knows he is there! Especially his mortal enemy the window cleaner! 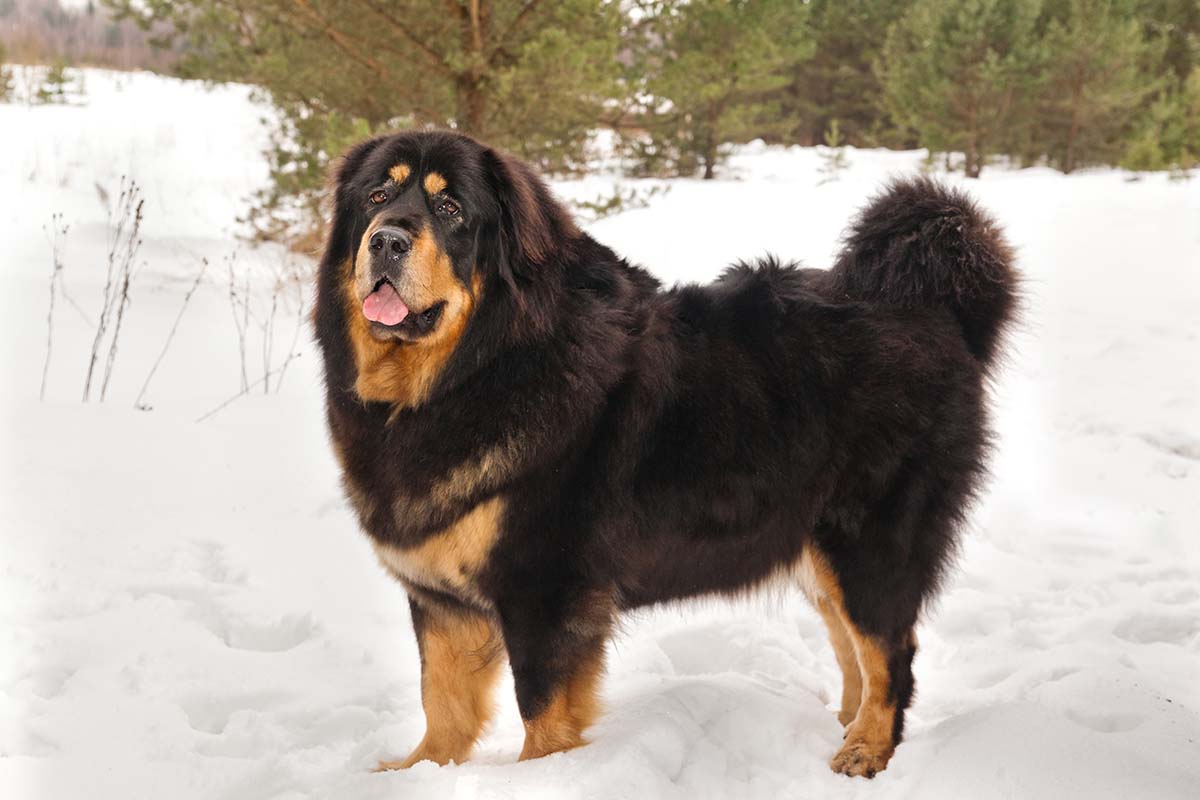 • Is a Tibetan Mastiff a good family dog?

Ted is great with both of our families and is also great with kids and their dogs as long as they are correctly socialised.

• Can I own a Tibetan Mastiff in the UK?

Yes you can own one in the UK. However, they can be difficult to find and also very expensive.

• Is the Tibetan Mastiff the most powerful dog?

I don’t know about the most powerful but yes they are defiantly powerful and Ted is very strong when he wants to be.

• Do Tibetan Mastiffs bark a lot?

Yes – but only when he is at home protecting his territory he very rarely barks when we are out and about.

Ted is afraid of the water so I can’t comment on this one unfortunately.

Ted is groomed often and well looked after so he doesn’t smell but I can imagine he would if he were left to his own devices.

• Do Tibetan mastiffs need a lot of space?

Ted takes up a lot of room in the house and needs plenty of space to roam around so definitely won’t be ideal for anyone with a small space.

• Is Tibetan Mastiff hard to train?

They can be very stubborn and won’t do anything they don’t want to but will the right owner and some persistence they are trainable.