Siberian Huskies are a popular dog breed around the world thanks in part to their striking appearance.

These dogs present themselves as intelligent, playful but they’ve also got athletic frames which were used to pull sleds.

While they were working dogs, Siberian Huskies have become popular family pets in the USA and worldwide.

The American Kennel Club define these dogs as friendly and outgoing given they love to meet new people.

However, Siberian Huskies aren’t hypoallergenic due to their heavy shedding.

In this article, we’re going to take you through 20 facts that you need to know about Siberian Huskies.

20) Originate in northern region of Russia

Siberian Huskies are common around the world but the sled dogs originated in Siberian region of Russia. They were used by the Chukchi people to pull sleds during hunts for food and fur. Recognised as the fourth oldest dog in the world, Siberian Huskies would share the bed with children and women to keep them warm.

They’ve got some serious vocal ability. Siberian Huskies don’t have a reputation for being dogs that bark a lot. However, they will howl. This is a sound that is associated with wolves, coyotes and huskies. A Siberian Husky’s howl can be heard up to 10 miles away. When talking to their owners, they’ll sometimes use a woo-woo sound. If your Siberian Husky is unhappy with you or a situation, they will let you know about it in no uncertain terms!

Siberian Huskies received worldwide acclaim for their heroism in 1925 when 150 sled dogs and 20 mushers managed to travel 674 miles in five days to deliver life-saving serum diphtheria medicine from Nenana to Nome. Balto was the lead dog and has a statue in his honour in New York City. Acclaimed director Steven Spielberg made a film about this feat in 1995, aptly called Balto.

Siberian Huskies are often likened to Wolves. The popularity of Game of Thrones and Dire Wolves have led to more people adopting Siberian Huskies. However, the northern dogs may be wolf like in appearance but they’re not directly related to wolves. They are believed to be distant relatives – though.

Used by The Chukchi people to pull sleds, Siberian Huskies had to use the common sense and intelligence to pick the best routes for their passengers. As a result, Siberian Huskies are independent thinkers with a high IQ level. However, they need firm training to ensure they don’t try to challenge the authority of their owners.

One of the trademark traits of the Siberian Husky are their piercing eyes. Their eyes can come in a range of different shades. However, blue eyes are perhaps the most striking color. Some Siberian Huskies can have bi-eye (two eyes with different colors) or even a parti eye (one eye with two different colors). Their appearance make them a big hit on Instagram.

If you’re a jogging enthusiast, Siberian Huskies could be a good fit for your lifestyle. You won’t be surprised to learn that the Spitz dogs love to run. They can reach speeds of up to 28mph! They can run for hours and hours, burning energy but preserving their fat stores.

13) Live in hot or cold weather

As you might expect, Siberian Huskies have a double coat to protect them from the elements. Their outer coat is coarse and straight and their inner coat is soft and thick. While they’re associated with cold conditions, they can also live in hotter temperatures as long as they’ve got access to fresh water and plenty of shade.

By the American Kennel Club’s definition, Siberian Huskies should be friendly and outgoing dogs. The sled dogs like to interact and meet new people. They crave human attentions and are used to socialising with others given their pack mentality. They don’t make good guard dogs due to their inherent friendliness.

If you’re thinking about a Siberian Husky as a pet, you’ll want to make sure that you’re yard is securely fenced. They’ve got a reputation for being expert escape artists. Whether it’s chasing a small animal such as a squirrel or just being mischievous, they’ll find a way out if your security fence has any weakness. 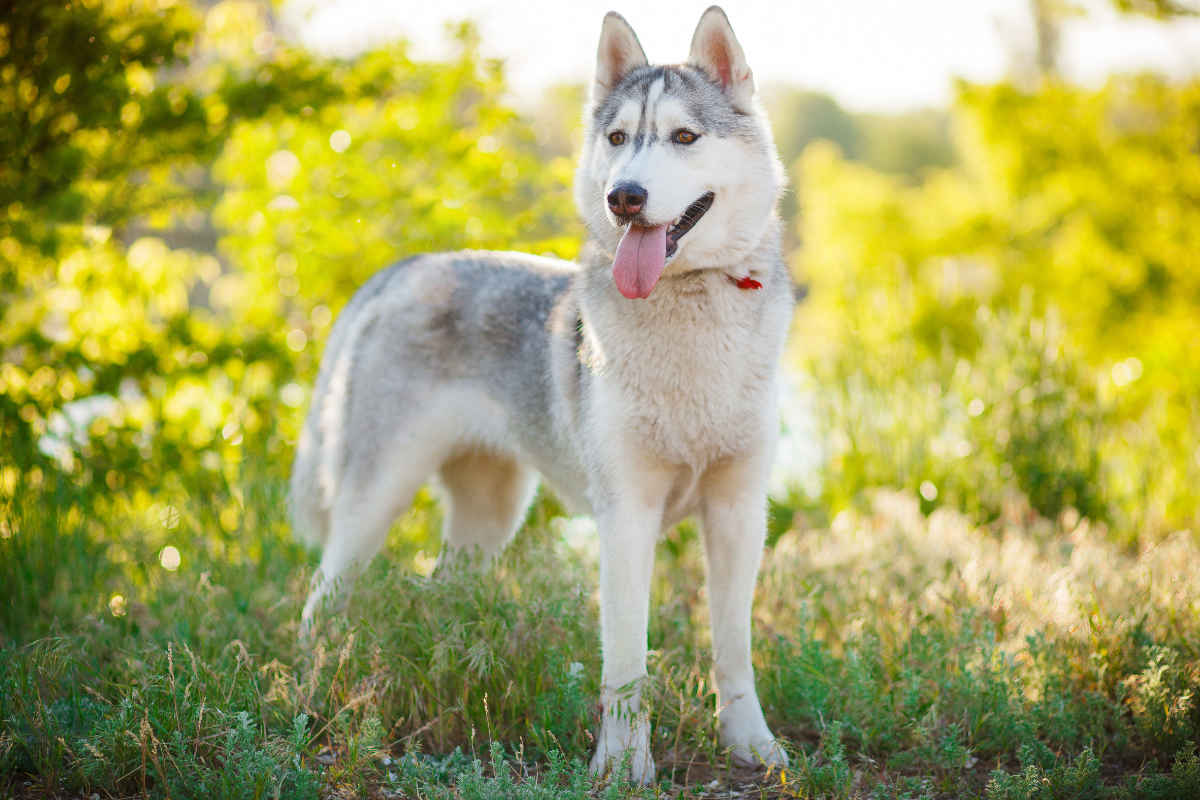 Siberian Huskies like to play rough – so don’t be alarmed if you see two of these dogs engage in a bit of rough and tumble. They’re a playful breed that like to partake in a big of roughhousing. This can also be very loud.

Overall, the Siberian Husky is considered a pretty healthy dog breed. However, they’re prone to some medical conditions. These include hypothyroidism, heart disease, epilepsy, and laryngeal paralysis. Siberian Huskies have a lifespan between 12 and 15 years.

They may require a lot of exercise but Siberian Husky do like to cuddle. The Chukchi people would sleep with these dogs to help retain body heat in the cold conditions in northern Russia. As a result, they won’t be opposed to sharing the bed if you want a cuddle.

When you think about dog breeds that have served in wars, the Doberman or German Shepherd will probably spring to mind. Siberian Huskies were used in World War II to deliver messages, help with search and rescue, as well as carry out other important functions.

Siberian Huskies should be pretty easy to train as long as you start from a young age. You should bring a Siberian Husky to puppy manners and socialisation classes to start on the right foot. They’ve got a high IQ and super smart provided they’re motivated to learn.

5) Imported to the USA for Gold Rush

Siberian Husky originated in Russia but they made their way to the United States in 1908. Russian trader William Goosak was responsible for bringing the dogs to Alaska. They played a big part in the Gold Rush due to their ability to pull sleds over great distances thanks to their endurance.

They’ve earned a reputation for being great family pets. Siberian Huskies can develop a strong bond with all family members, including an affinity with children. However, you should never leave a child alone with a dog, no matter how much you believe you can trust the canine.

3) Used to be called Arctic Huskies

Siberian Huskies arrived in Alaska in 1908 but the first member of the breed wasn’t registered with the AKC until 1930. Initially, they were called Arctic Huskies before they were renamed to Siberian Huskies in 1991.

These charming and sociable dogs are very playful. They’ll enjoy playing with their owners in the garden or yard. As we mentioned above, they love nothing more than to roughhouse with other like-minded dogs. However, if you’re not providing a Siberian Husky with sufficient playtime or stimulation, they could resort to unwanted destructive behaviours.