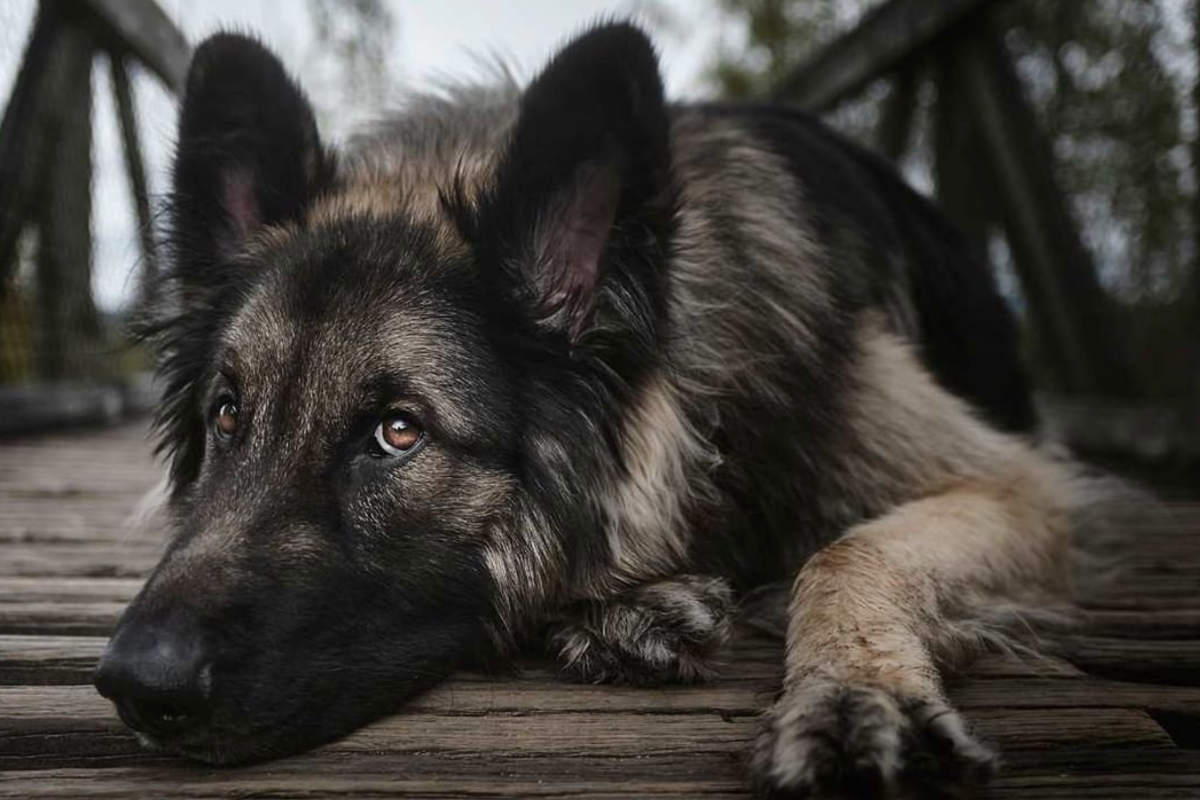 The Shiloh Shepherd is a large, active companion dog.

The breed begun in the 1970s before the American Rare Breed Association recognised the Shiloh Shepherd in 1991.

As a rare beed, it’s easy to come across a lot of misinformation online about these wonderful and unique canines.

For instance, a Shiloh Shepherd is not a cross between an Alaskan Malamute and a German Shepherd. This is a misconception and untrue.

We spoke to Cynthia Kelly, who is a member of the International Shiloh Shepherd Alliance (ISSA), and Shiloh Shepherd breeder Darcie Coles to learn more about the rare breed.

Working together, they provided detailed insight into the Shiloh Shepherd breed to give our readers an exclusive perspective on these incredible dogs.

In doing so, they debunked some of the misconceptions and myths surrounding Shiloh Shepherds and provided an authoritative feature on the breed.

Note: All the photos in this article have been taken from Campfire Shilohs with their permission. 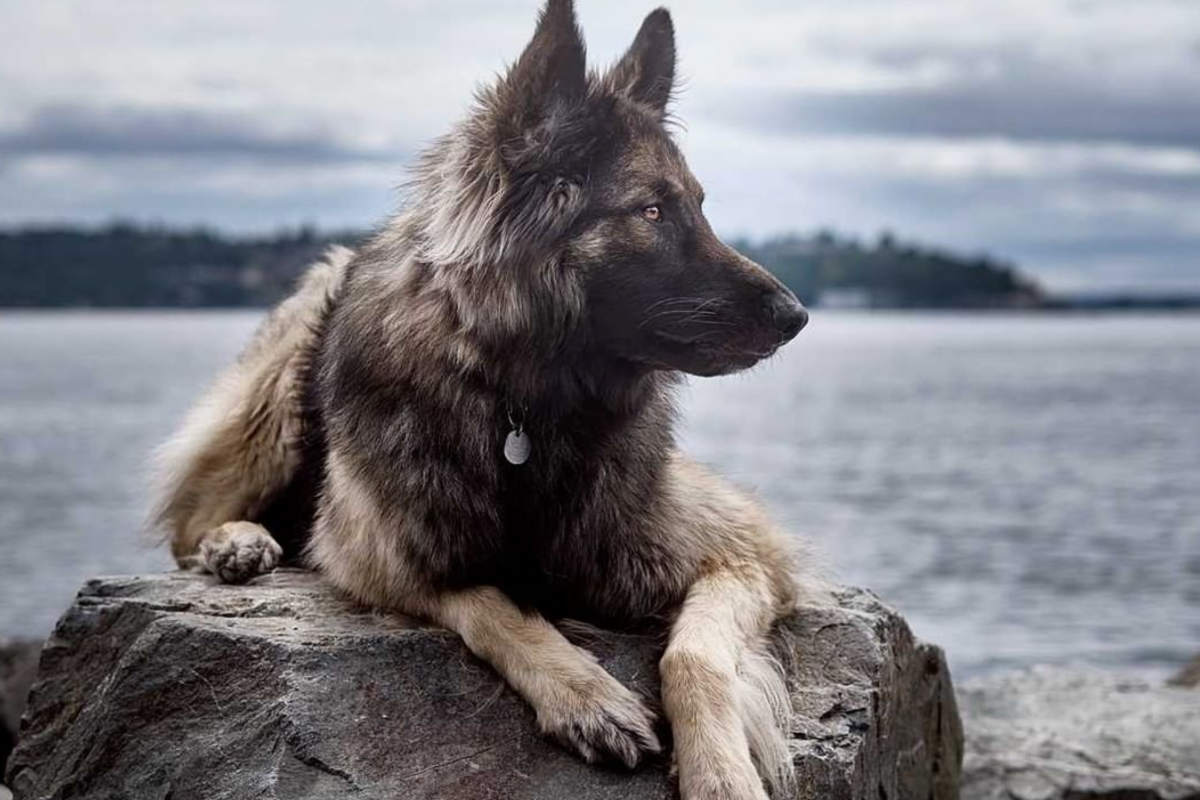 The Shiloh Shepherd is a large, active companion dog originally derived from a combination of herding and working breeds. The breed founder began working on the Shiloh in the 1970s, and in 1991 it was recognized as its own rare breed by ARBA (the American Rare Breed Association). The Shiloh is large, calm, and generally easier to handle than many working shepherd breeds. However, as with any dog, they do require significant socialization and structure from the time they are puppies. They are highly intelligent and can be protective of their family and home.

What Are The Origins Of The Shiloh Shepherd? 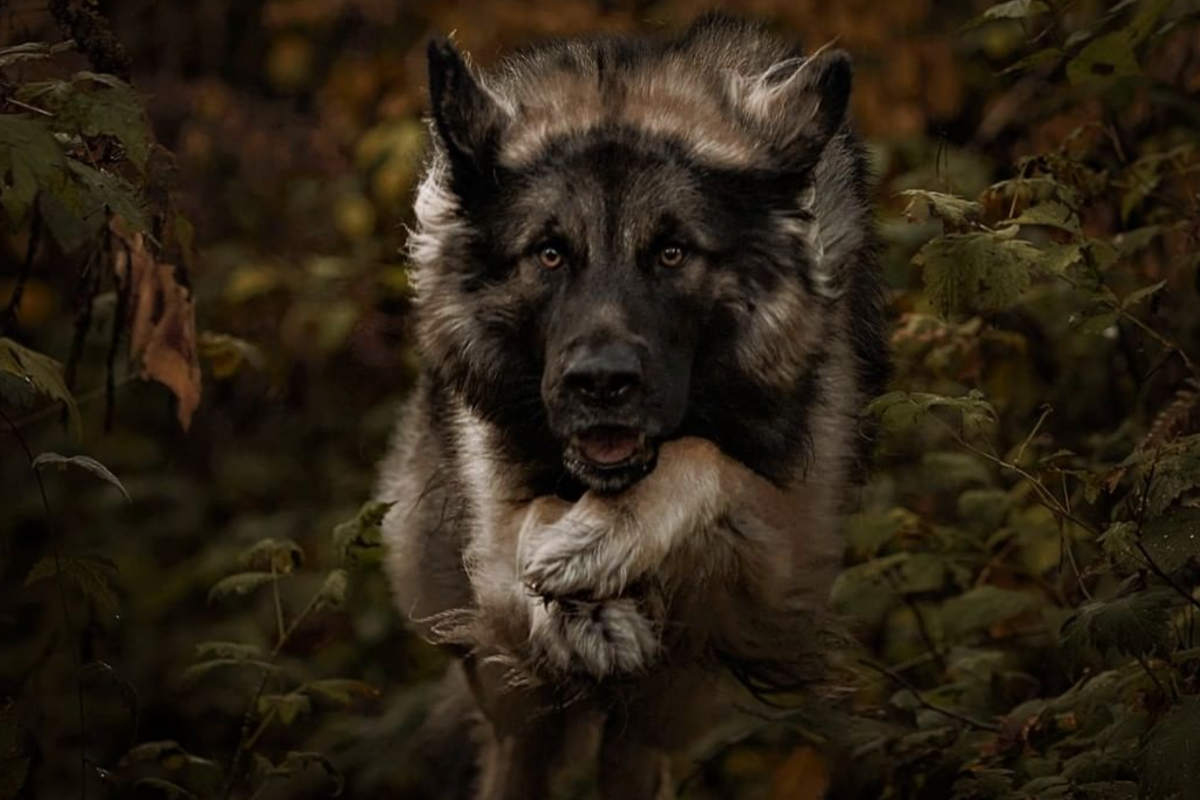 How Big Do Shiloh Shepherds Get?

How Would You Describe The Appearance Of Shiloh Shepherds (Coat Color etc)? 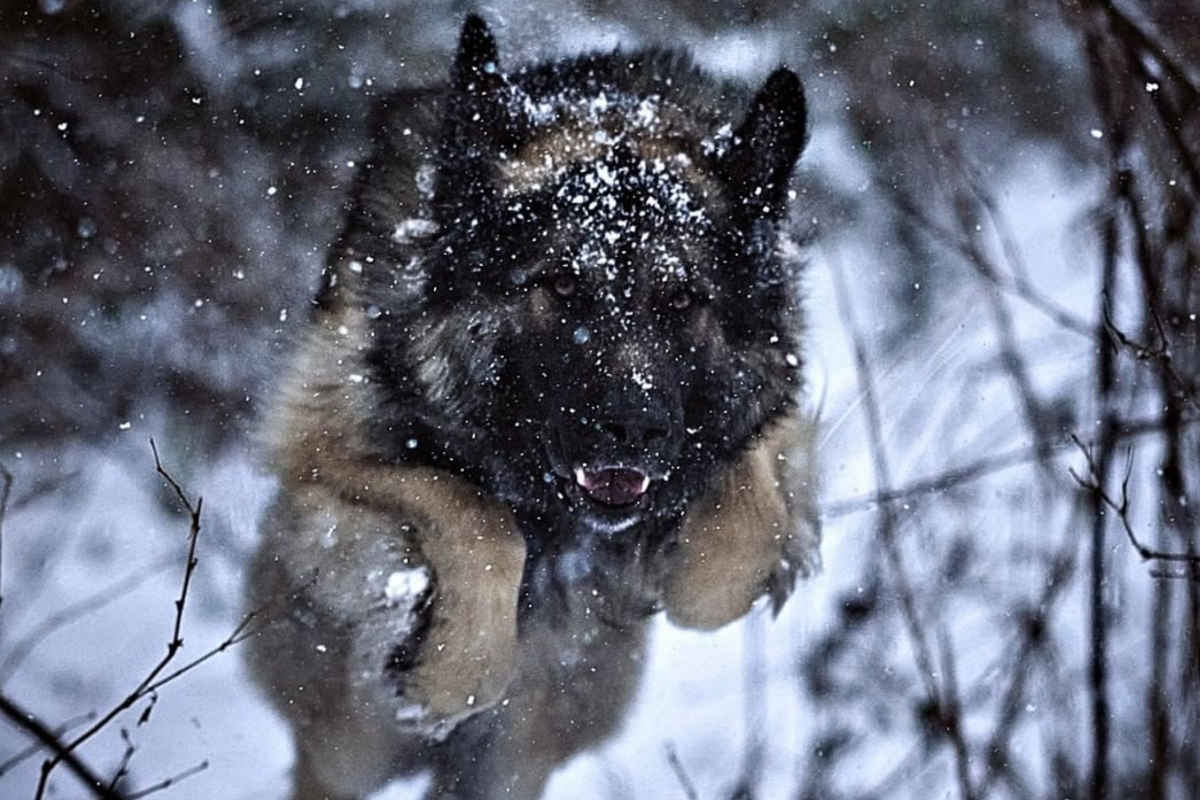 Shilohs are a little easier to manage than most other shepherd breeds, but still retain herding and protective instincts. This should be considered when training and socializing, as these traits will make them more environmentally aware than other non-herding type breeds. Shilohs are typically a medium to low energy breed, with some exceptions to either end of the spectrum.

However, that doesn’t mean that Shilohs are inherently couch potatoes, and they require training, calm exposure, and proper socialization. A wellbred Shiloh is even-tempered and fits into family life, and many are accomplished therapy dogs! They’re typically neutral to strangers, but with pushy or improper socialization, they can be fearful/shy. Aggression, nervousness, and shyness are faults. Shilohs are great for weekend warriors and for dabbling in dog sports.

Are Shiloh Shepherds Hard To Train? 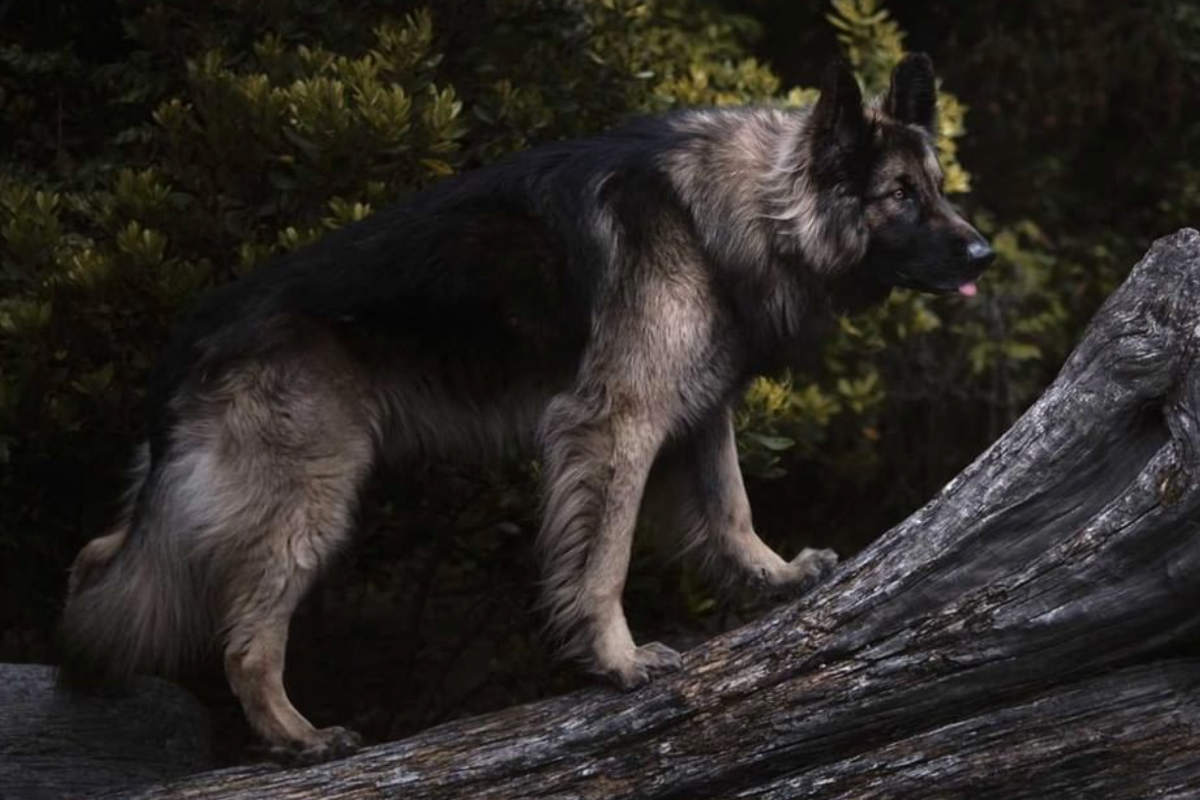 Shilohs have a quick and curious intelligence that is easy to train. Their exuberant and fun-loving personalities often have them earning the title of “class clown,” and they are often selected by trainers to demo during classes.

Adequate daily exercise for a full grown Shiloh is a minimum 60 minute walk or other equivalent activity. However, remember that the energy levels do vary in this breed, so if a pup is more energetic, an owner may want to do a bit more. Younger puppies also have more energy.

It is important not to over-exercise—doing so can have detrimental effects on their growing joints and bones, and Shiloh pups are still growing until they are 18-24 months old. Mental stimulation is equally important for Shilohs, especially as they are growing, and physical exercise must be moderated for their growth. A Shiloh has a very active brain. Training sessions, puzzle toys, and other types of brain games are fantastic ways to tire out an active Shiloh mind, and they help build a healthy relationship between handler and dog.

Do Shiloh Shepherds Shed A Lot? Do They Require A Lot Of Grooming?

Yes, as a double coated breed Shilohs do shed. The two different coat lengths do shed differently, however, and therefore require slightly different levels of grooming commitment. The smooth (shorter) coat sheds a bit throughout the year. Twice a year it will “blow coat.” . However, it’s a very wash-and-wear coat; easy to care for. It requires only a quick brushing here and there to keep looking nice, and it’s generally simple to keep clean since dried mud and other debris brushes right out! We only find it necessary to bathe our smooths a couple times a year. This coat does well during the hot summers and is still thick enough to block winter cold. It’s an all-purpose coat for all weather—and it’s still beautiful. The plush (long) coat sheds very little throughout the year, but will “blow coat” twice a year and it can be epic. The longer coat will “catch” the shedding hairs, so you MUST brush during these times or the coat will matt. Otherwise the long coat is easier to care for than it looks, doing well with a brisk brushing two or three times a week. It does seem to require a bit more frequent bathing than the smooth, generally every 2-3 months. The plush coat is not so good in the hotter summers but can adapt to heat if you work up to it. The plush coat LOVES the cold.

Would You Say Shiloh Shepherd Are Family-Friendly Dogs (Kid-Friendly And/Or Pet-Friendly)?

One of the goals of the breed is for a dog that is easier to handle and more family friendly. They often do well with other animals in the house if raised with them from an early age. Breeders will also select dogs that will do well in a family environment, as busy households can be overwhelming to a less confident dog. With any dog, it is important that there is structure for both puppy and children, and that children and dogs are always supervised and monitored for signs of distress when interacting. 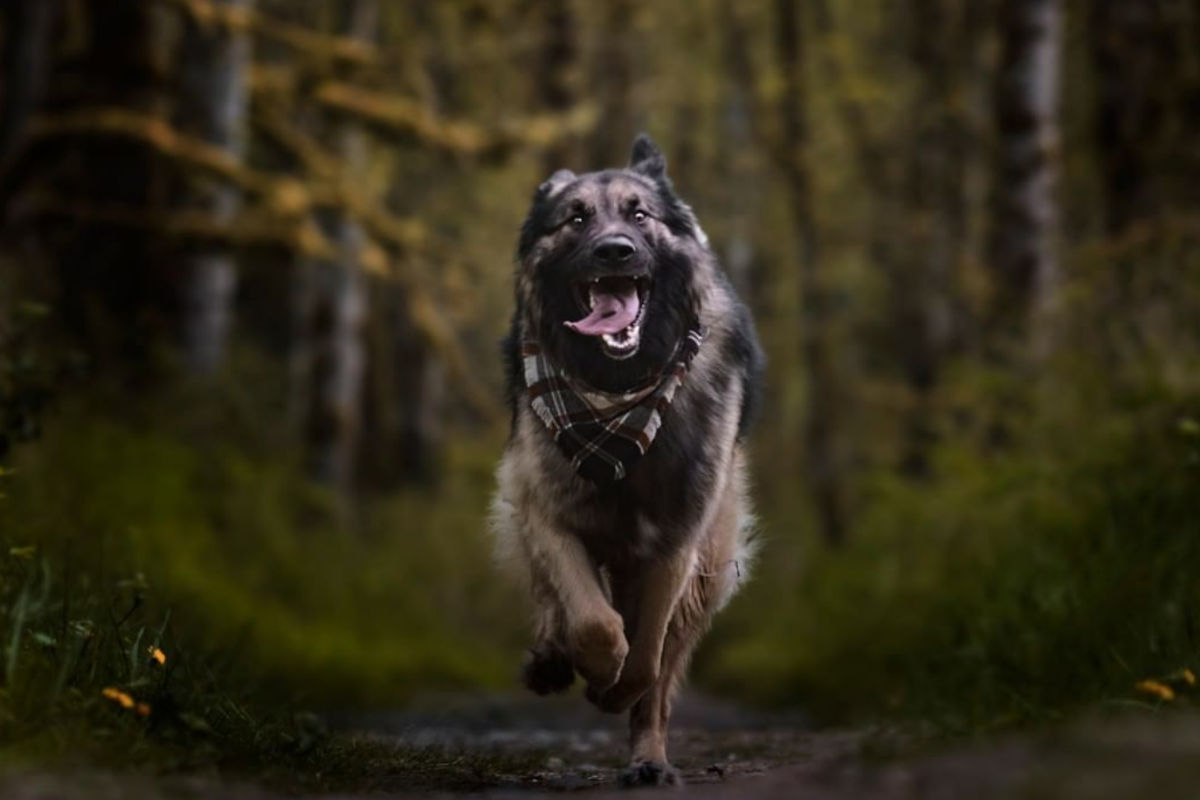 Shilohs can bond strongly to their family, and can experience separation anxiety if owners do not practice giving the dogs some independent alone time with enrichment toys. However, they are less prone to chew holes in the walls as some higher-intensity breeds.

What Advice Would You Give To Someone Looking For A Shiloh Shepherd Breeder Or Puppy?

Look for a breeder directly from the ISSA (International Shiloh Shepherd Alliance). All of these breeders are required to submit breeding proposals to a panel of breed wardens to ensure quality. Every pairing has mandated requirements which include PennHip/OFA hips and OFA elbows, DM clear, heart holter, heart auscultation, a temperament test, and DNA submitted to UC Davis. The website www.shiloh-shepherd.com is a great resource. If you choose a breeder that is not registered with the ISSA, be sure to ask for complete health testing (OFA elbows, OFA hips/PennHip, DM clear, heart holter at 6 months and veterinarian auscultation or echo at 24 months, and temperament testing).

How Much Does A Shiloh Shepherd Puppy Cost? 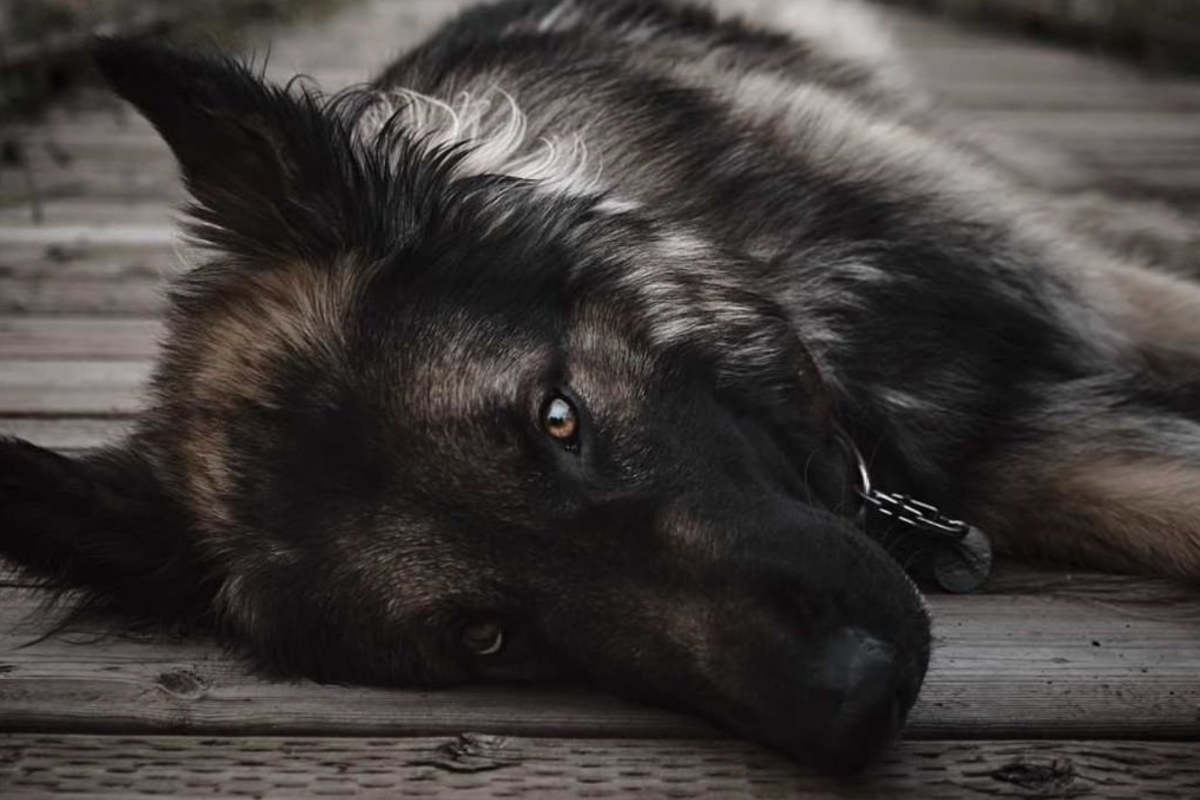 Can You Give An Insight Into The Monthly Costs Of Owning A Shiloh Shepherd?

Insurance and food may cost you at least $100 a month. It’s also a good idea to budget for training classes and grooming expenses, especially with puppies and young dogs.

Are Shiloh Shepherds Fussy Eaters Or Have Any Dietary Requirements? 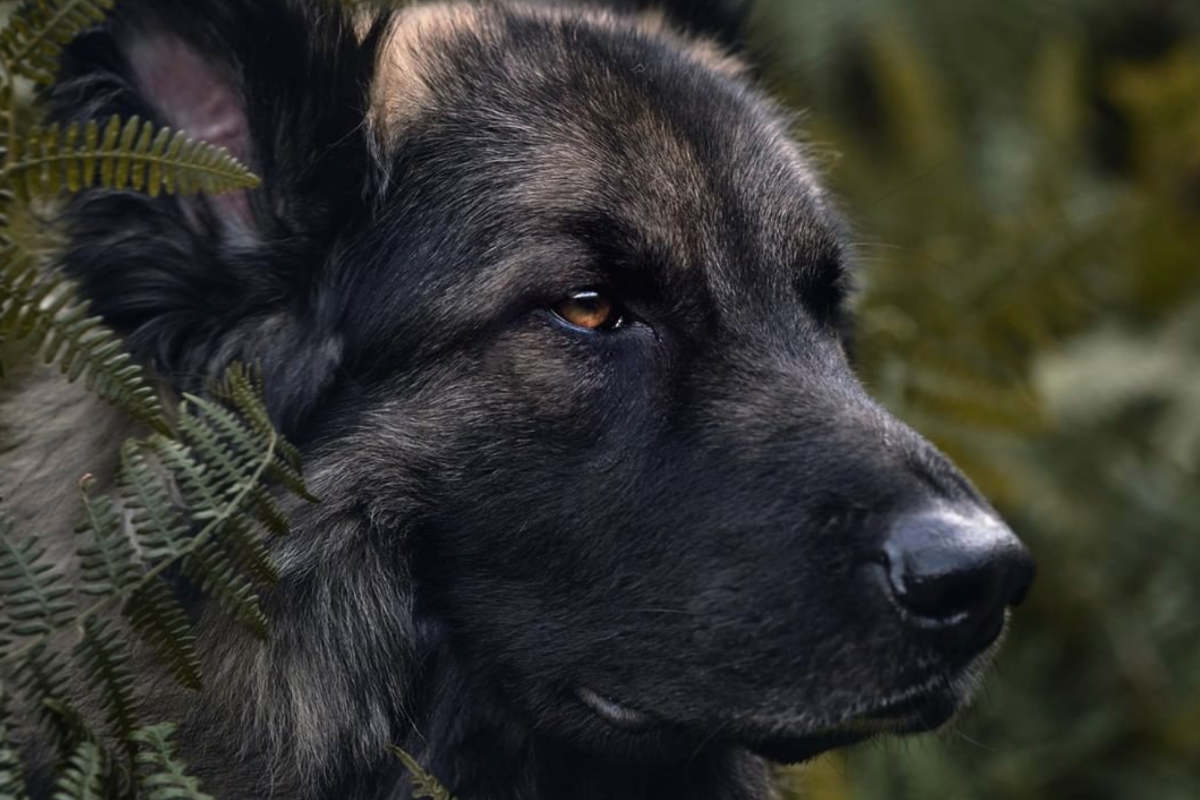 Picky eaters are not uncommon. Some dogs can be a little sensitive to chicken or salmon, but it’s easy to switch them to a different dog food.

Are There Any Misconceptions That You’d Like To Debunk About Shiloh Shepherds?

Will A Shiloh Shepherd Protect Me? 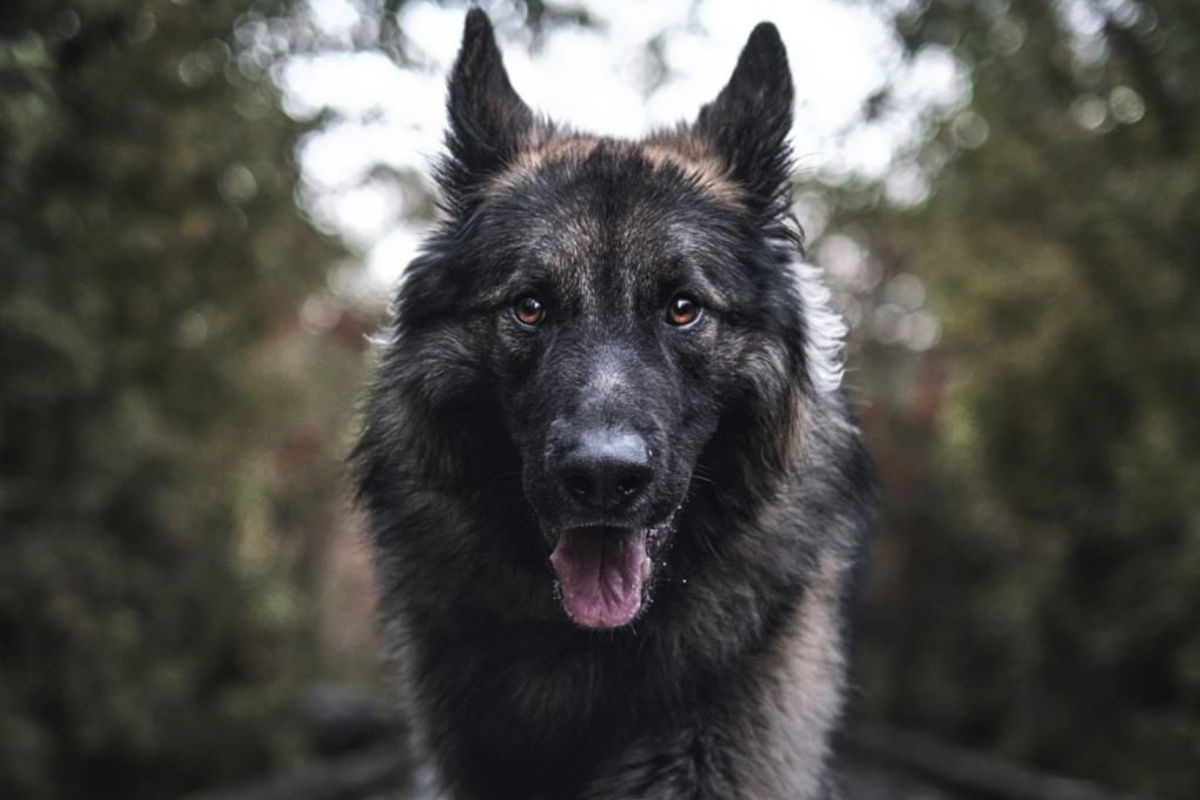 They may bark if someone is at the door, and may bark at a threatening stranger. However, they are bred to be more bark than bite, and are typically not truly aggressive.

Do Shiloh Shepherds Have Wolf In Them?

Can A Shiloh Shepherd Live In An Apartment? 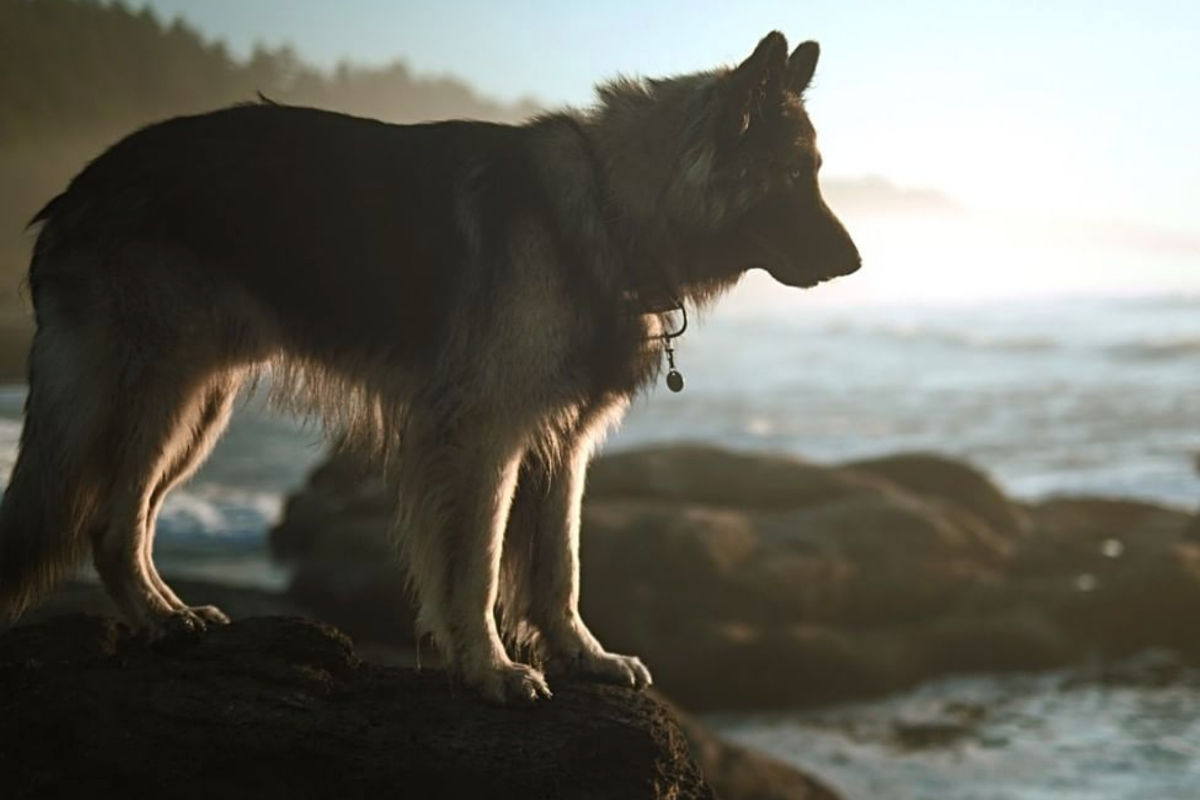 With proper daily exercise and mental stimulation, a Shiloh can live in an apartment. As dogs with territorial tendencies, be prepared for barking and consider how this may impact apartment living for your family and your neighbors.

Is A Shiloh Shepherd Rare?

They are considered a rare breed and are recognized by ARBA (American Rare Breed Association). There are only a few thousand Shilohs in existence. 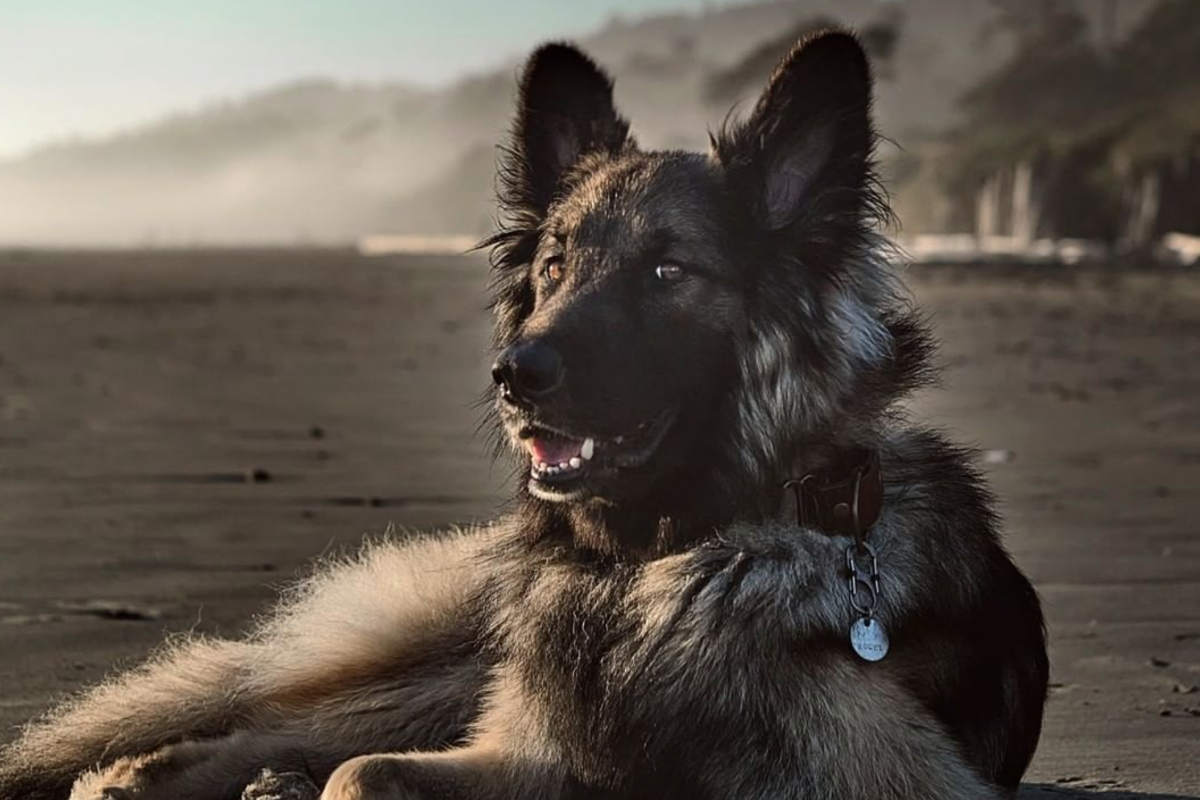 Almost all Shilohs Shepherds are affectionate and want to be near their owners, but actual cuddliness varies.

It’s very rare to find purebred Shilohs in rescues, since most breeders are very selective on the homes their puppies go to, and follow the common practice of taking dogs back if their home falls through. Rehomes by individual breeders happen, and there is also the Shiloh Shepherd specific rescue that monitors and facilitates the rehoming of Shilohs. Shiloh Shepherd breeders are few and far between, so it’s wise to anticipate some level of travel to get a Shiloh puppy from a reputable and responsible breeder. Currently, the only countries with breeders are Canada, Northern Europe, and the United States. You can anticipate average wait list times to be between 6 months and 2 years in North America, and over 5 years in Northern Europe. 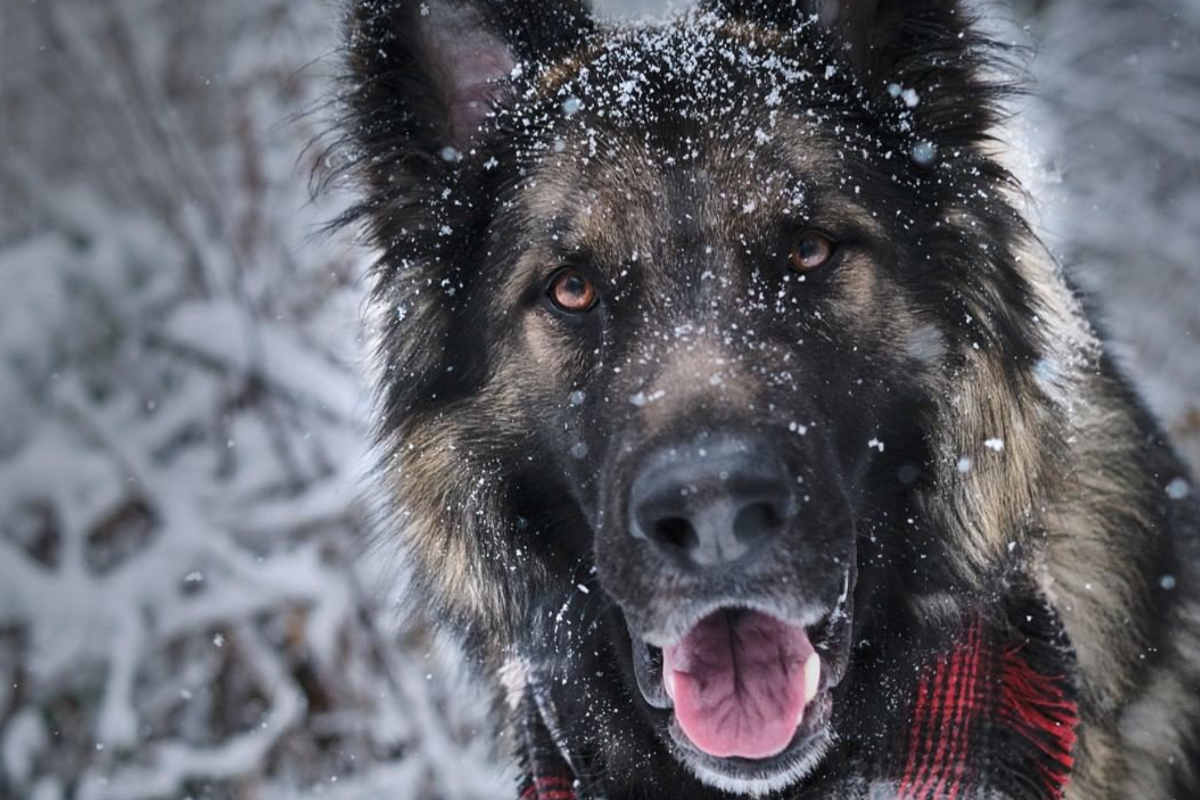 We’ve reached the end of our feature on Shiloh Shepherds.

These stunning dogs are recognised by the Rare Breeds Association of America.

Not to be confused with an Alaskan Malamute-German Shepherd mix, Shiloh Shepherds are a breed in their own right.