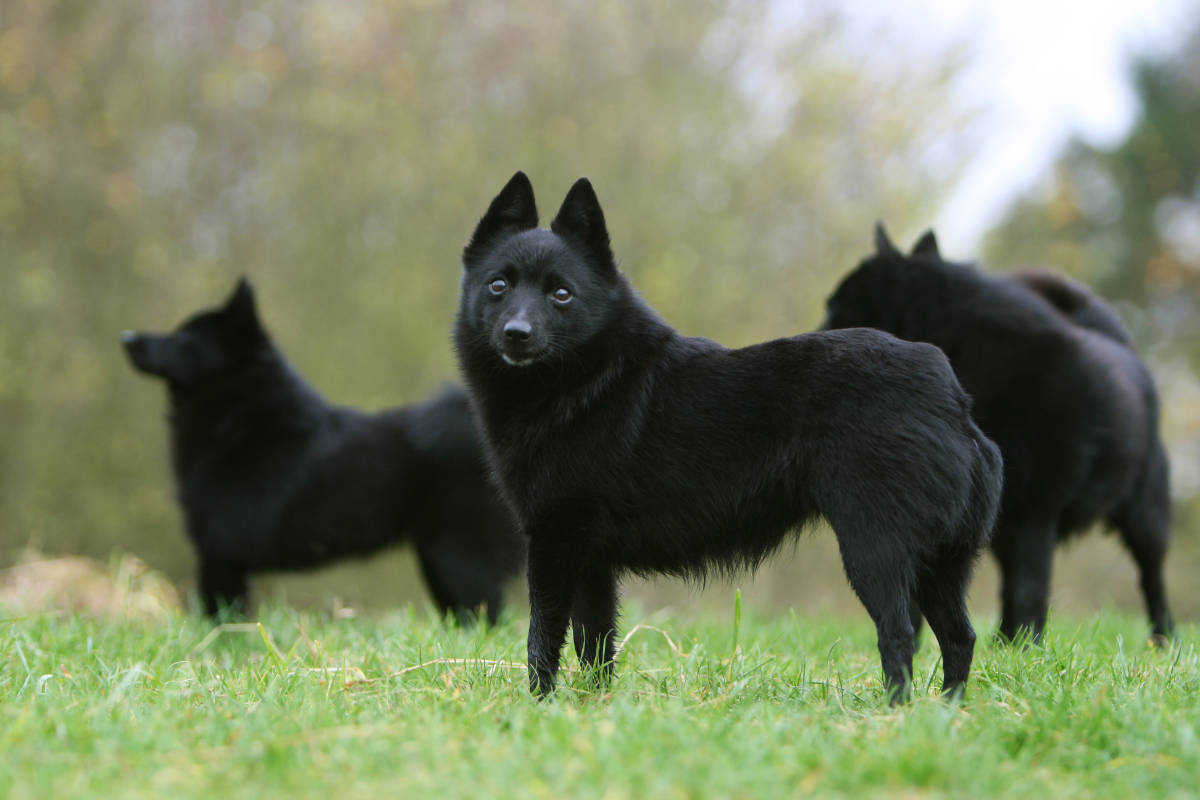 By Kieran Beckles
Updated on 2 December 2021

The Belgian breed, sometimes nicknamed the little black devil or little captain, were traditionally used as ratters in local markets and canals in Belgium.

However, their function in society has evolved in the 21st century and the Schipperke are more commonly serving a role as dedicated and loving family pets worldwide.

Their small size means these dogs can travel most places with their owners, while their high IQ allows pet parents to train these dogs to a high level.

However, the Schipperke, like any other dog breed, can have advantages and disadvantages that dog owners will need to consider before taking the plunge and rescuing or buying one of these dogs.

In this feature on Schipperke pros and cons, we’ll hear from Okami (@okami.the.dog), Pickle (@pickletheschipperke) and Roe (@schipalong) to get their first-hand experience of the Schipperke breed and share some of their photos (with their permission). 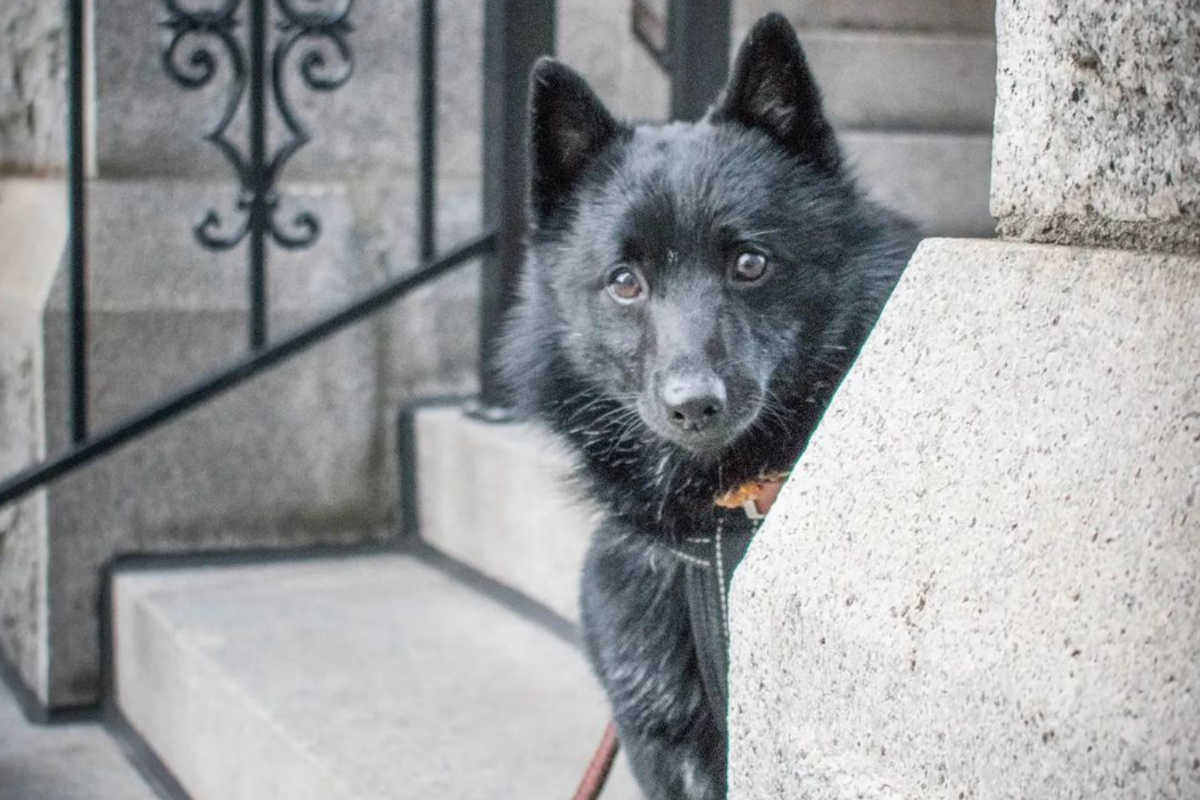 The Schipperke ranks 15th in Stanley Coren’s infamous book, ‘The Intelligence Of Dogs’. According to Coren’s system, Schipperke will take 5 to 15 repetitions to understand new commands and obey first command 85% of the time or better. Speaking to the Schipperke owners featured in this article, it’s clear that these small Belgian dogs are quick learners and sometimes too clever!

Hilary delved a little deeper into Schipperke intelligence based upon her experience training her dog Roe.

Schipperkes rank very high in obedience intelligence, which is the marker for a combination of both general intelligence for learning and the desire to learn from and work with people.

However, she warned that some Schipperke are so observant and quick to learn that dog owners can inadvertently teach these black dogs some bad habits.

If anything they’re so easy to train, you can run into trouble accidentally teaching them stuff you didn’t mean to. I accidentally trained Roe to kneecap me when he was a puppy, because when he would jump up I would ignore him until he sat, them reward him. But because they can think in multiple steps, instead of learning that sitting equals a reward, he learned that shoving with his front paws then sitting got him attention.

If you’re looking for a companion dog, you may want to consider the charming Schipperke as a potential family pet. Schipperke love to be in the company of their fellow family members, developing a deep bond with their owners. The American Kennel Club’s website explains that Schipperke served as a “fearless watchdog” on the canals, barges and city shops in their Belgian homeland. They can also trace their roots back to a black sheepdog called the Leauvenaar. In the 21st century, their role has evolved into companion pets. With a lifespan ranging from 12 to 14 years, Schipperke will be by your side for quite some time.

Anna, who owns a Schipperke called Okami, explained that these canines like to have human company.

They can suffer from separation if they haven’t used to being left all alone before. With training, this is not a problem. But a Schipperke will always prefer to have company then being alone.

She went on to add that Schipperke can make perfect lapdogs who love cuddle time.

Schipperkes are so cuddly and a joy of living! Okami is always happy, she shows it by running fast and sticking out her tongue. She often comes to snuggle up to us and asks for hugs. 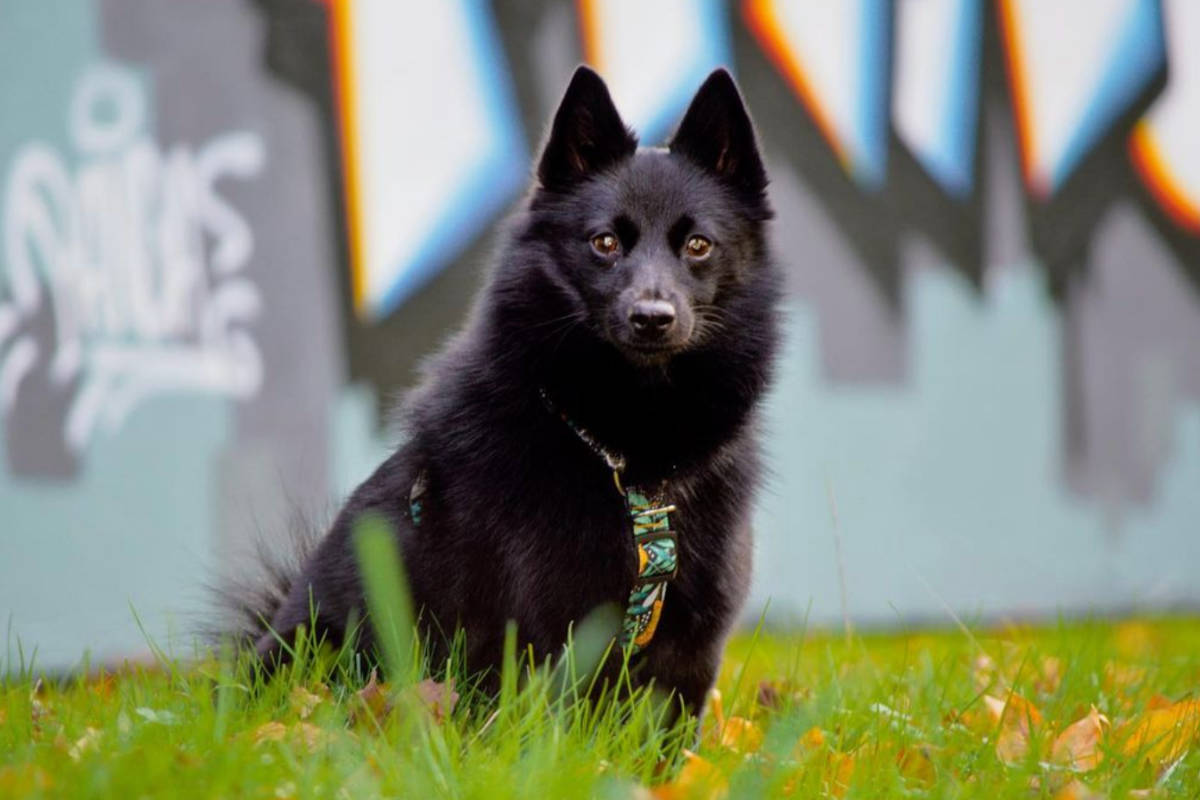 Standing at 10-13 inches tall and weighing in at 10-16 pounds, Schipperke are small dogs. Therefore, they can make great pets in a number of different environments. Schipperke can thrive in an apartment or flat provided they’re given sufficient mental and physical stimulation because these Belgian pups like to be active.

Anna explained that Okami has thrived in a flat with sufficient daily exercise.

They can live in a house like in a flat (we’ve done it 2 years with Okami), as long as you give them their exercise requirements.

If you like to travel with your four-legged friend, Schipperke are highly portable given their small size. Whether you’re travelling by car, train, air or riverboat, you should be able to bring your little captain with you.

Camille listed Pickle’s portability as one of the Schipperke’s advantages.

The advantages are a lot! They learn easily and with their small sizes they can easily travel with them.

Hilary suggested some alternative exercise games to keep your Schipperke active if you aren’t able to go on long walks every day.

You don’t need to be a super athlete to own one though. Lower activity sports like nose work are great for keeping their brain happy, which is the most important part of keeping a happy Schipperke. More than just hours of walking or running, they need their mental needs met. A sniff walk, training routine, or sport where you are engaging with them is going to do much more for them than, say, turning them loose to run around and hoping they exercise themselves. That’ll just build their exercise stamina without doing much to tire them out.

Like Alaskan Klee Kai, Schipperke don’t appear to omit a doggy odor. However, unlike their Alaskan cousins, these Belgian dogs don’t shed as much as you might think given their trademark black coat. All three owners that we spoke to for this feature revealed that their Schipperke’s coat was easy to maintain. Schipperke have a double coat and they’ll blow out their inner coat at the changing of the seasons, usually twice a year. However, their fur doesn’t stick to clothes or furniture as much as other so-called Spitz-type dogs. So while Schipperke do shed quite a bit, owners only need to brush their furry friends once or twice a week.

Hilary went as far as describing the Schipperke as a “low maintenance breed”.

Schipperkes have a very natural or “wild-type” coat, with a woolly undercoat and very sleek outercoat/guard hairs, so they’re very low maintenance. Due to the smoothness of their outercoat their undercoat doesn’t get caught in the guard hairs, so they don’t tend to get matted or impacted undercoat. A quick brush out with a coat rake once a week at most is all that’s needed. Their outercoat sheds water, dirt, sand, those velcro-like plant seeds, etc. and they don’t have a strong doggie odour, so they hardly need any bathing at all to stay looking and smelling good (I would recommend every 3-6 months at most). 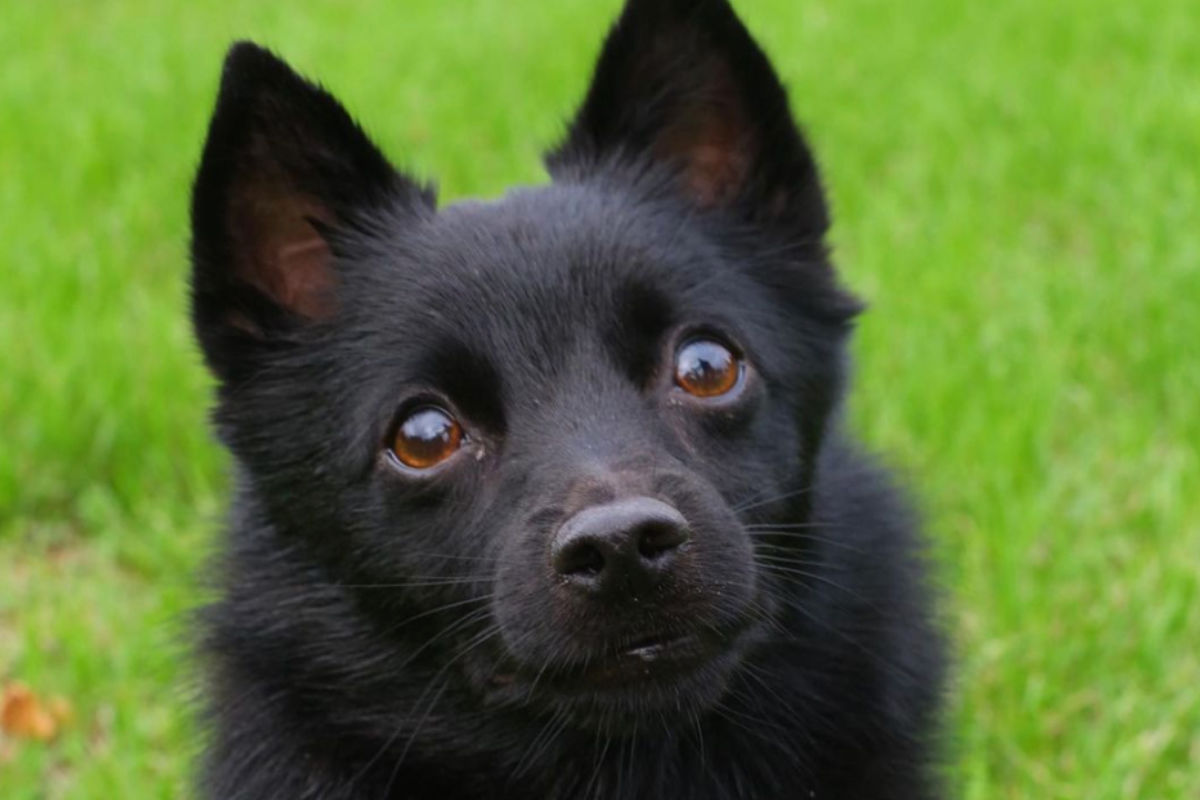 Schipperke have built a reputation for being family friendly dogs. They’re patient with younger members of the family, although you should never leave a Schipperke or any dog unsupervised with children. These little black devils are described as loving and devoted family members who will be tolerant of children who may be unpredictable in their actions. Having said that, it’s still a good idea to educate children on how to handle and treat these dogs with respect.

Camille described the Schipperke as a perfect breed for households with kids.

They are small and love to play, so they can be perfect for kids. They love to receive tons of attention. They generally love cats but pay attention to rodents (because of their past as “little captain.”). They love to be around other dogs.

Schipperke have a reputation for showing a stubborn tendency. Sometimes these black dogs will stop responding to commands, particularly if they’re not being treated with respect. Roe’s owner Hilary explained that this stubbornness can manifest itself in a number of ways, such as sniffing and turning their back on you.

Positive training is the better way to go, even if sometimes we have to be a little firmer in our voice. Sometimes you have to be more stubborn than they are.

While Schipperke can make loving family pets that love to socialise with other two-legged or four-legged members of the family, they can be aloof, shy or skittish around people they don’t know. The AKC describes the Schipperke as a cautious but curious dog breed. If confronted with an unfamiliar situation, Schipperke will usually approach with caution. Anna explained that Okami can be edgy in some situations which can lead to barking or reactivity. It’s something that Camille has also experienced with Pickle, who can be anxious around unfamiliar things or outsiders. 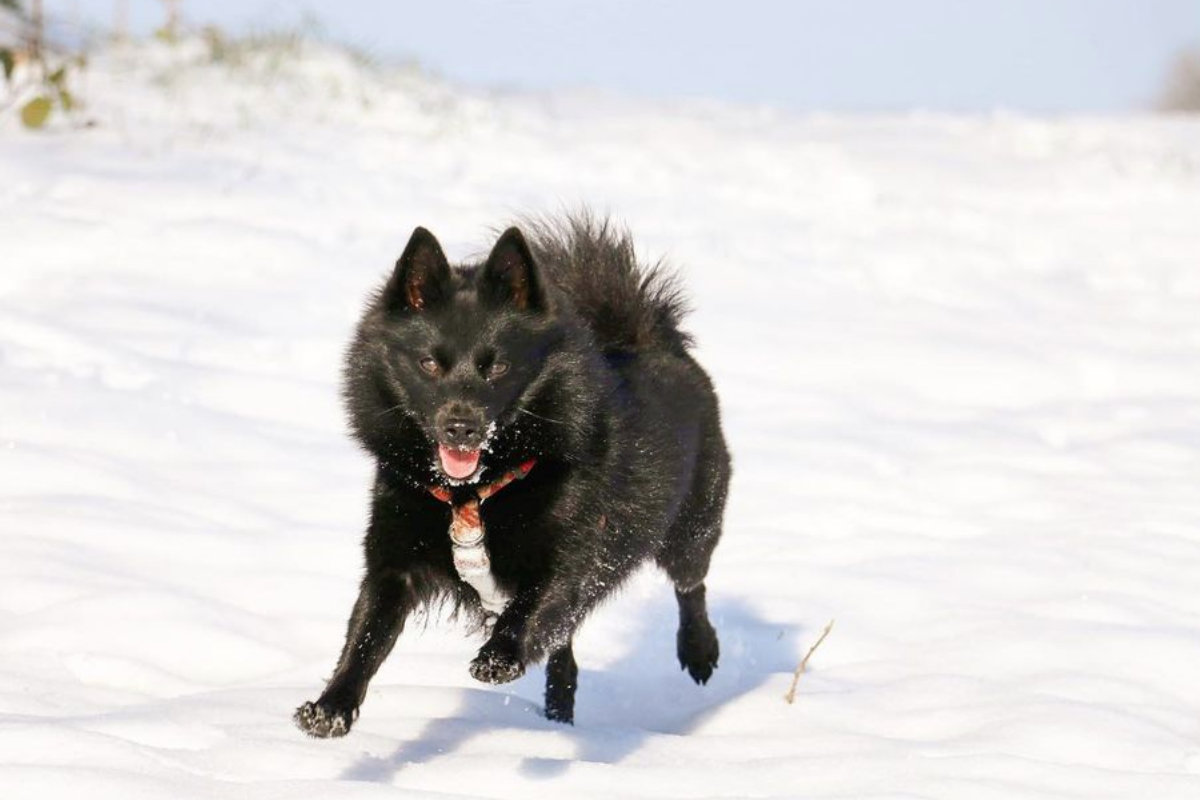 It’s a good idea to start recall training at a young age with Schipperke pups. With consistent recall training, you’ll more than likely have an obedient dog that will listen to you. Schipperke’s ancestors were shepherd dogs, while the Schipperke were used as ratters in the canals and local markets in Belgium. So if a Schipperke spots a small rodent, there’s a good chance they’ll chase it. Anna explained that Okami has developed a habit of pursuing horses and trucks!

If you’ve decided the Schipperke is the right breed for your home and/or your family, you could first start your search by looking for a Schipperke that needs a forever home. You can contact your local rescue organisation or foundations dedicated specifically to rescuing and rehoming Schipperke. If you decide to go for a Schipperke puppy, you may need a lot of patience to find a breeder who fits the criteria of a registered and responsible breeder following the breed standard. If you do find a Schipperke breeder, you may have to put down a deposit and join a waiting list given Schipperke breeders aren’t as common as other breeds. You should make sure you contact and visit a couple of Schipperke breeders before you settle on the right one for you. Visit the Schipperke Club of America for more information. 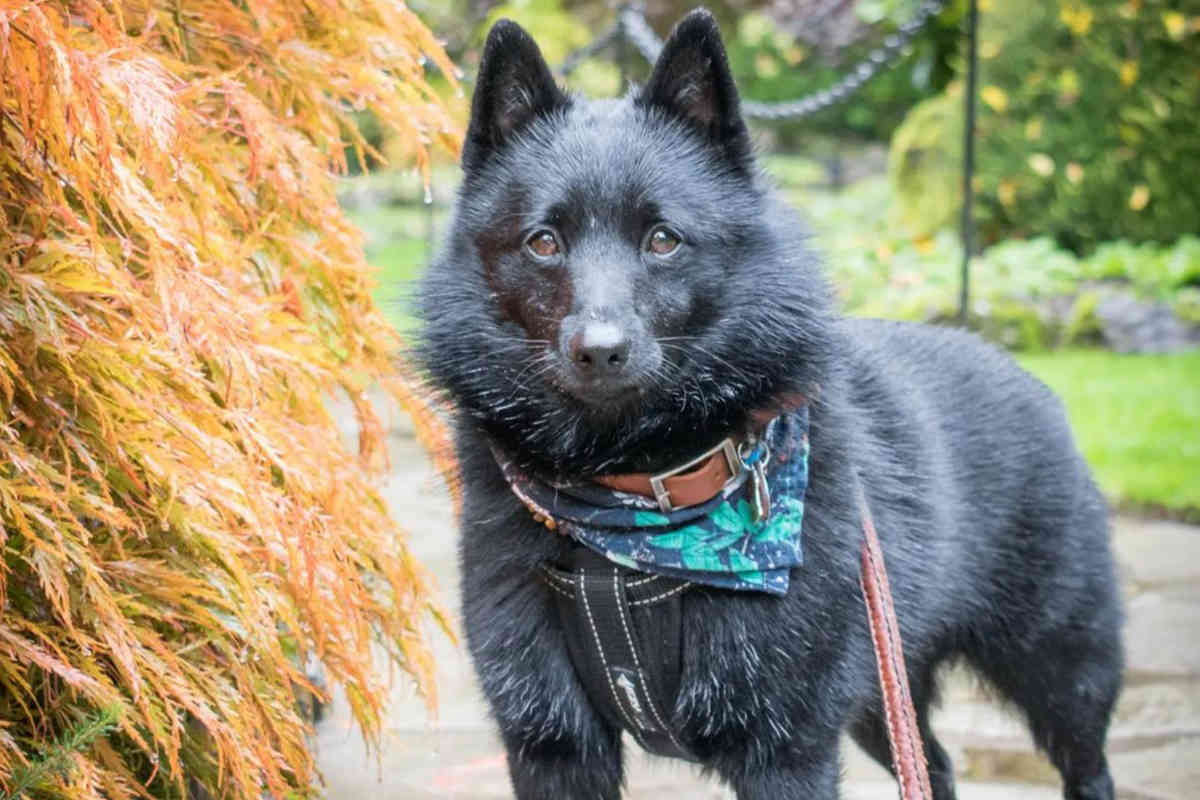 The AKC write on their website that Schipperkes were created to work as ratters and watchdogs. Therefore, it’s in their DNA makeup to be alert to strange people or unfamiliar noises. When they identify a potential threat, Schipperke will let out a bark to alert their owners. While they make watchdogs, you’ll have to keep a tabs on their noise levels to ensure your Schipperke doesn’t become an excessive barker. With regular exercise, mental stimulation and training, Schipperke won’t regress to unwanted behaviours. Roe’s owner Hilary explains more:

Being a working breed, they have inherent drives that need to be met or behaviour problems (such as barking and anxiety) can pop up.