Samoyed are a Spitz breed with a thick double coat.

These dogs can trace their origins back to north western Russia where the Samoyedic tribe harnessed them to hunt and herd reindeer.

Given the freezing temperatures in the region, Samoyeds developed a double coat to protect them against the elements.

Samoyeds make great family pets but one consideration before adopting a dog is whether they shed or not.

For those with an allergy to dogs, you’ll be eager to learn whether Samoyeds and other breeds are hypoallergenic.

In this article, we’ll take a close look the shedding patterns of Samoyeds, whether they’re hypoallergenic and how much maintenance they require.

What is a Samoyed?

Samoyeds were originally used by the Samoyede people to hunt and herd reindeer, while they also pulled sleds for these nomadic tribes people.

They played a key part in Samoyede society and were embraced by this civilisation. The nomads would even sleep with their dogs to avail of their fur’s ability to retain heat.

It’s believed that the Samoyede people’s deep affection for the canines kindled a sense of affection and loyalty from Samoyeds, who are thought to be related to the ancient arctic wolf.

In modern society, Samoyeds have built a reputation as great family pets due to their ability to show devotion towards the household members. Their patience and playfulness makes them a potential option for families with small children.

They’re eager to please their owners and they’ll protect family members, all attributes that were present when the Samoyede people relied on these dogs as part of their society.

Samoyeds were brought to end in the late 18th century before they were used by European explorers who sought out new areas of the world in the Arctic and Antartica.

Adept at pulling sleds with an innate ability to pick a safe route, Samoyeds were used by mushers. The first Samoyed was registered with the American Kennel Club in 1906. 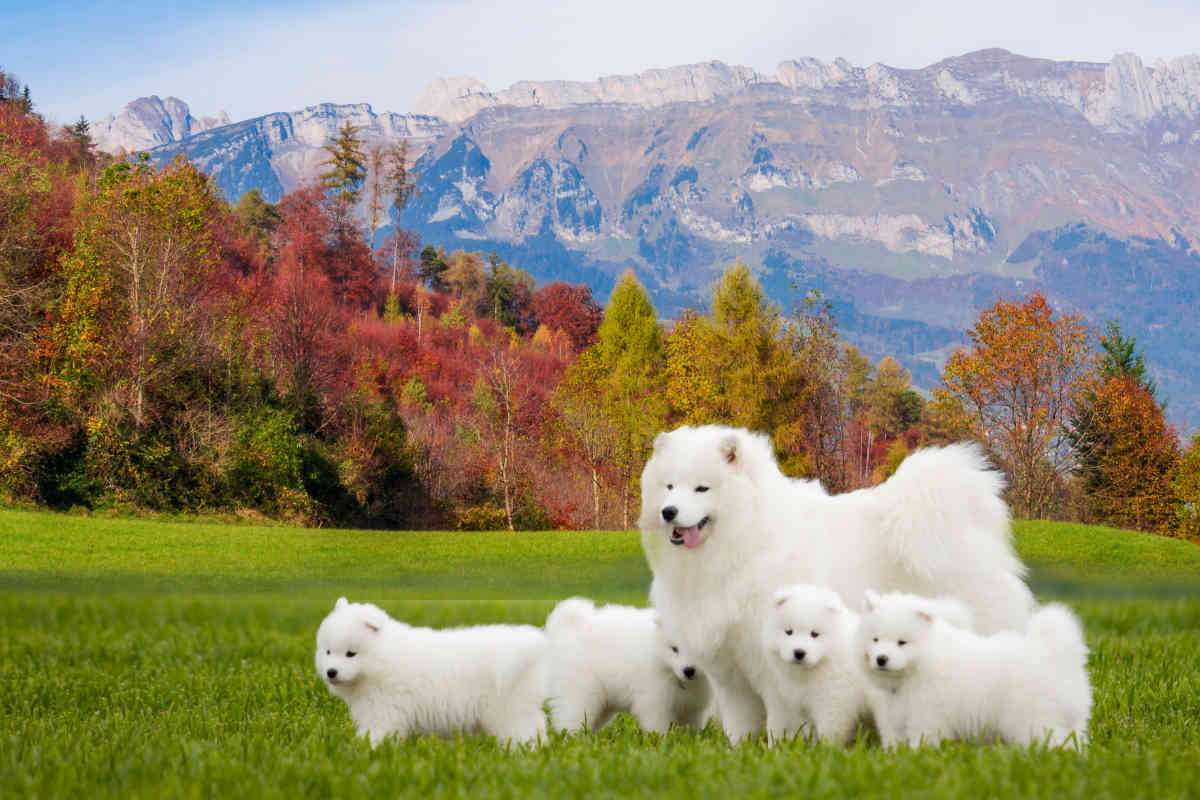 While some of our readers won’t have encountered a Samoyed, there’s a pretty good chance they’ll be able to identify one of these magnificent canines due to their eye catching appearance.

The breed standard dictates that Samoyeds should be between 19 and 24 inches in height. Their size is judged by height rather than weight.

You’ll often hear Samoyeds described as Smiling Sammies. Their smile is a key attribute if you’re thinking about showing one of the Spitz dogs.

The AKC write: “Lips should be black for preference and slightly curved up at
the corners of the mouth, giving the ‘Samoyed smile’.”

Samoyeds can come in a variety of different colors, although white tends to be the most common shade for thee northern dog breed.

They should be pure white, white and biscuit, cream, or all biscuit.

The Samoyed should have a durable, heavy and weather resistant coat to deal with the unforgiving weather conditions.

Although their fur is versatile, Samoyeds should be well groomed with a “quality” coat.

Samoyeds have a double coat. AKC breed standard definition for a Samoyed’s coat. Their bodies are covered by an undercoat that is soft, short, thick, close wool. It will have longer and harsh hair growing through it to form the outer coat. It should stand straight out from the body but there shouldn’t be any curls.

The Samoyed Club of America add that a Samoyed’s hair should be odourless.

The organisation go on to say that a Samoyed’s wooly under coat should be allowed to shed rather than sheared.

The shedding pattern depends on the sex of the Samoyed. Females will shed their coat twice a year, while males tend to shed once a year.

Samoyed’s require quite a bit of grooming, so be prepared!

The Samoyed Club of America dispel a few myths about the breed on their website:

“Too many new owners are being sold on Samoyeds being “easy” to keep clean, they never get dirty, never shed, never have odor and need never be bathed! This is misrepresentation of the breed.”

As we’ve mentioned above, Samoyeds do shed. When they’re blowing out their coat, they’ll need daily brushing to get rid of dead or loose hair. Doing so can help Samoyed owners to keep on top of the relentless shedding.

Regular brushing is important to prevent against matting and tangling.

Even when they’re not in shedding mode, Samoyeds will require brushing two or three times a week.

Samoyeds need a bath at least twice a year. If a Samoyed has a habit of picking up dirt frequently, they’ll need to be bathed more regularly.

Their toe nails need to be trimmed every three weeks or so.

Samoyeds are not hypoallergenic. In fact, no dog is completely hypoallergenic, something which the AKC emphasises on their website.

They may produce less dander than some dog breeds but as we’ve touched on above, they shed a lot.

Don’t believe us? Well, here’s @scotlandwithfluffywolf to provide a little more information based upon her experience with Sally the Samoyed:

They are NOT hypoallergenic. This is a widely held belief that is not true. Firstly no animal is truly hypoallergenic. Secondly this myth came about because Samoyeds have less dander than most dogs (but a LOT more hair shedding). The main cause of rehoming are families that believe the hypoallergenic hype and get a Samoyed, only to find out the children/spouse/parent who wasn’t allergic to the puppy fur is now highly allergic to the adult dog.

If you’re looking for a dog that is more hypoallergenic than most dog breeds, you can check out 19 varieties that the AKC recommends.

Can Samoyeds live in hot weather?

Samoyeds may come from the cold regions of north western Russia, they’ve popped up in a variety of different locations around the world.

They can live in hot weather if they’ve got access to fresh water, an area of shade and avoid going outside when the temperature is at its peak.

If you live in an area with high humidity or hot temperatures, there can be more shedding.

The Samoyed Club of America believe that a Samoyed’s coat can protect against the sun.

What do Samoyed owners say about their dog’s shedding?

The hair! It gets everywhere! I’ve blown up one vacuum cleaner already (one day it went bang and there was black smoke, the motor had burnt out).

There are some Samoyed mix breeds that fall under the category of designer dogs. These hybrids are bred to combine the best aspects of both breeds.

For example, Samsky or Samusky are a mix between a Samoyed and a Siberian Husky. 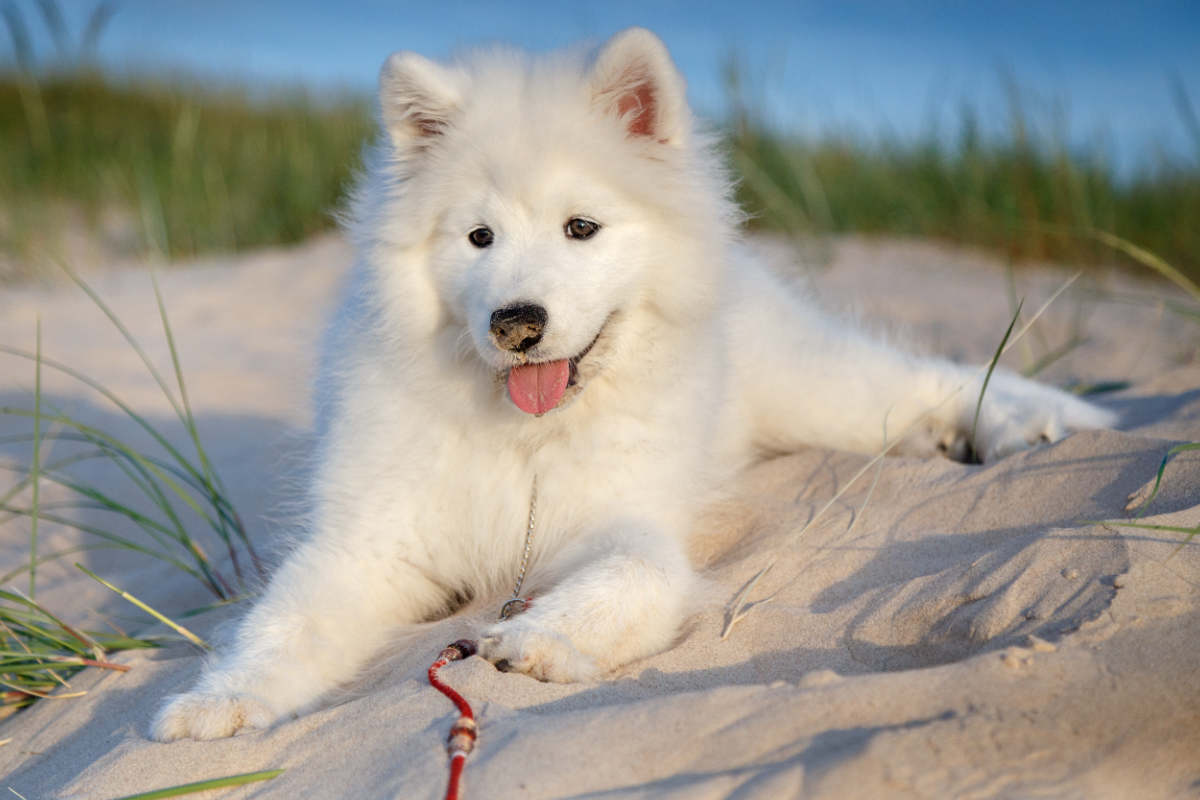 So there you have it, we’ve provided an insight into the shedding patterns of Samoyeds, their grooming needs and whether they’re hypoallergenic.

These dogs make great family pets but you’ll need to make sure you’ve got a good vacuum to cope with their prolific shedding once or twice a year.