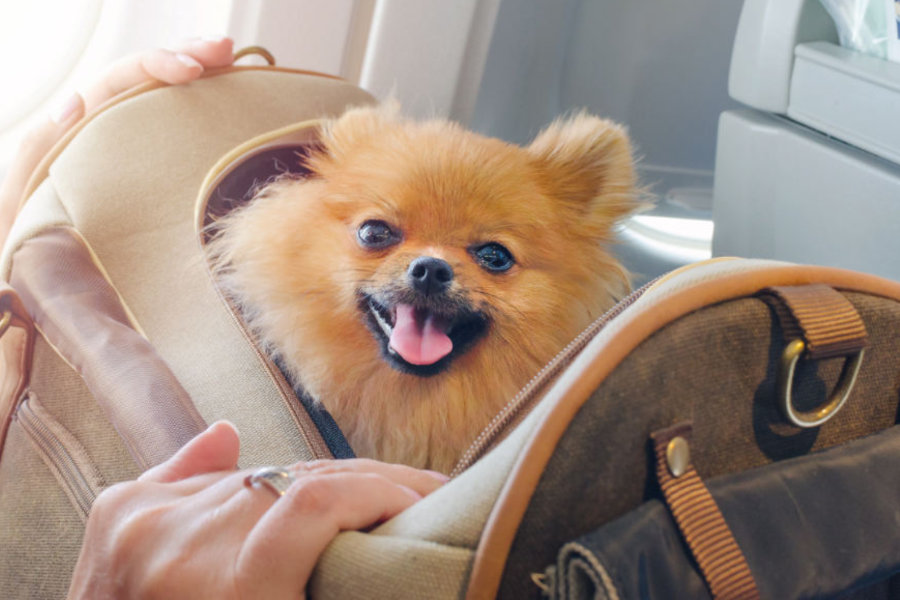 Pomeranians are the 23rd most popular dog breed in the United States.

But these Spitz dogs don’t originate from the USA despite their popularity amongst Americans.

Although their thought to be ancestors of an ancient Arctic breed, Pomeranians come from the Pomerania region in northern Poland and Germany.

Poms are usually instantly recognisable thanks to their upbeat demeanour and fox-like coat color.

However, the breed come in more than just one color despite the fox-type Pom being the most popular shade.

In this article, we’re going to take a close look at the Pomeranian breed, their coat colors as well as some of their physical and character traits.

With the introduction over, let’s take a closer look at Pomeranians.

Pomeranians hail from the northern region of Poland and Germany along the coastline of the Baltic Sea. The name of this area is Pomerania.

They achieved worldwide notoriety thanks to some British monarchs.

Queen Victoria is often attributed with having put the breed on the map of the dog world.

The Queen Regent took a particular interest in these dogs, although they were usually around 30 inches in size at that time.

She’s credited with having reduced the size of Pomeranians to the stature that we’re more familiar with today.

The first Pomeranian club was established in England before the Pom breed was registered with the American Kennel Club in 1891.

The AKC rates the Pomeranian as the 23rd most popular breed in the USA (as of 2019).

Pomeranians are a member of the AKC’s Toy Group.

Poms grow to a height of between six and seven inches (15 to 17 cm). These lively dogs usually weigh between three and seven pounds (1.3 to 3 kg).

Pomeranians can come in a variety of different colors, although orange or red Poms are usually the most common variety.

The breed can be a variety of different colors and shades, including but not limited to white, black, brown, red, orange, cream, blue, sable, black and tan, spotted, brindle and parti.

As with other breeds, there are certain colors that are more popular or are extremely rare.

What do AKC say?

Here’s what the American Kennel Club has to say about the color of Pomeranians:

All colors, patterns, and variations there-of are allowed and must be judged on an equal basis.

The AKC goes to examine certain varieties of Pomeranians in closer detail:

Brindle Pomeranains should have dark cross stripes on any solid color or allowed pattern.

Parti Pomeranains have a white base with any solid color or allowed pattern. A white blaze is preferred on the head.

Extreme Piebald Pomeranains display white with patches of color on head and base of tail.

Piebald Pomeranains have white with patches of color on head, body, and base of tail.

Irish Pomeranains have color on the head and body with white legs, chest and collar.

Where tan points is concerned, it can be any solid color or allowed pattern with markings sharply defined above each eye, inside the ears, muzzle, throat, fore chest, all lower legs and feet, the underside of the tail and skirt.

The richer the tan the more desirable. Tan markings should be readily visible.

If you’re planning to show your Pomeranian, they can’t have distinct white on their whole foot or on one or more whole feet on any acceptable color or pattern.

You’ll often hear or read about Pomeranians being compared to foxes. Hence, the Fox Face Pomeranian.

There are two key reasons why Poms are often liked to foxes.

• Color – the orange or red Pomeranian has a color that is similar to foxes. However, this shade is just one of many as we’ve already touched upon above. They can have varietes of red and orange too, such as red sable, orange sable or orange brindle.

• Face – Poms are described as a Spitz breed, which is a reference to their pointed muzzles. They can have three face shapes – the fox face, baby doll and teddy bear. A fox face has a moderately sized snout. Their pointed ears and dark eyes (the eye shape is different).

Pomeranians are often grouped in a northern type of dog called the Spitz or Wolfspitz.

One variety of Pom that attracts a lot of attention are Wolf Sable Pomeranians.

These Poms have a grey sable coat. The undercoat will usually be light grey, while the outer coat is darker grey. There shouldn’t be any hint of orange in the fur.

According to Pomeranian.org, you can get DNA color gene testing to see if a Pomeranian Wolf Sable has the aw color gene that proves it is an authentic wolf sable Pom.

They go on to explain the importance of this DNA testing:

DNA testing is a helpful tool for breeders. Breeders wishing to breed the Wolf Sable Pomeranian are now able to select breeding pairs who both carry the wolf sable aw gene with absolute certainty.

Yet another unique Pom variety is the Blue Pomeranian.

They should have a light grey outer coat with a grey or blueish under coat.

A chocolate Pomeranian should be solid brown – just like chocolate!

This variety of Pom can see their coat change due to sun exposure. Otherwise, their coat color won’t alter throughout their lives.

In fact, it was one of the original ‘colors’ in the first full Pomeranian Breed Standard of 1892.

BestPom go on to explain the breed standard for Black and Tan Pomeranians:

One of the trademark features of Pomeranians are their tails.

Their tails should be heavily plumed, while being set high and lying flat and straight on their back.

The AKC state that a low set tail is a fault according to the breed standard.

Pomsky is a cross breed between a Husky and Pomeranian (Photo: Adobe Stock)

A popular Pomeranian cross breed is the Pomsky. These designer dogs are a cross between a Pomeranian and a Siberian Husky.

Given the variety of coat colors in both the Pomeranian and Siberian Husky breeds, you can get a lot of different types of Pomskies.

So we’ve reached the end of our introduction to Pomeranian colors.

The AKC breed standards clearly states that “all colors, patterns, and variations there-of are allowed and must be judged on an equal basis”.

The orange or red Pomeranians are one of the most common varieties.