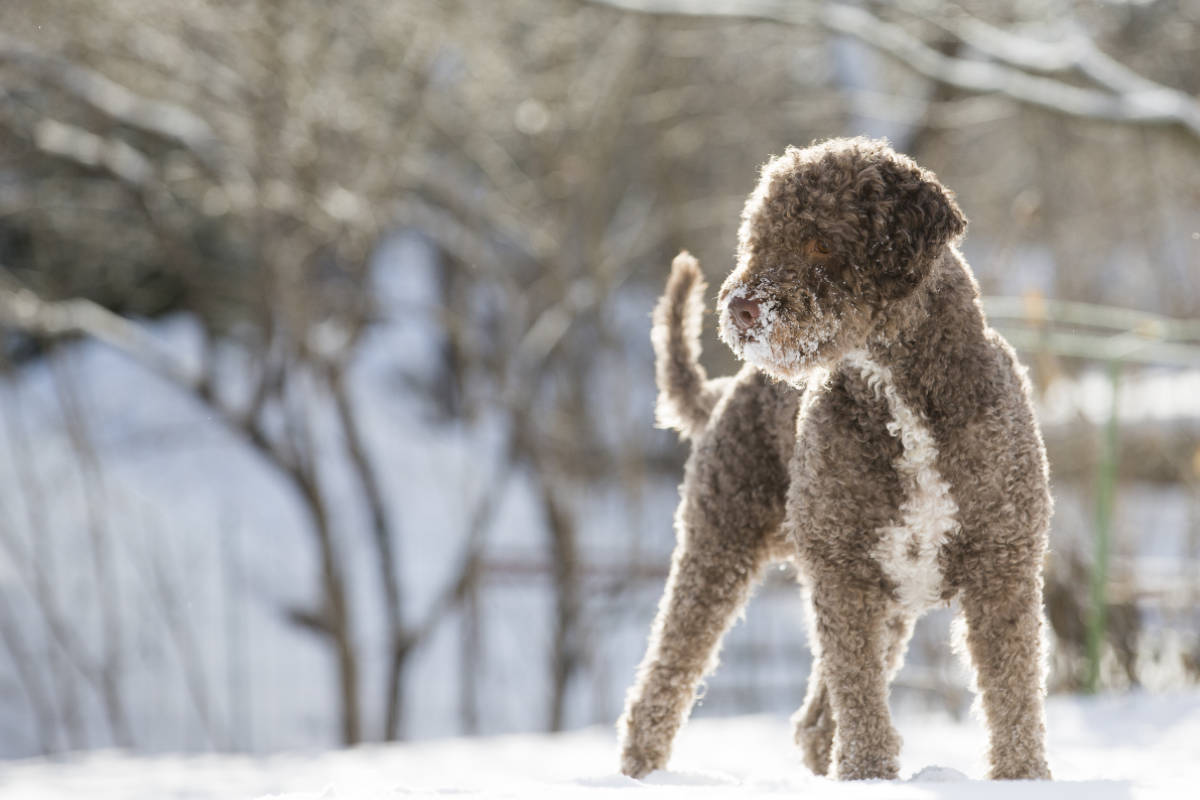 Are you thinking about bringing home a Lagotto Romagnolo?

These Italian dogs are internationally recognised as the world’s best truffle dogs as well as being adept retrievers.

The Lagotto Romagnolo is the 88th most popular dog breed in the USA, according to the American Kennel Club. 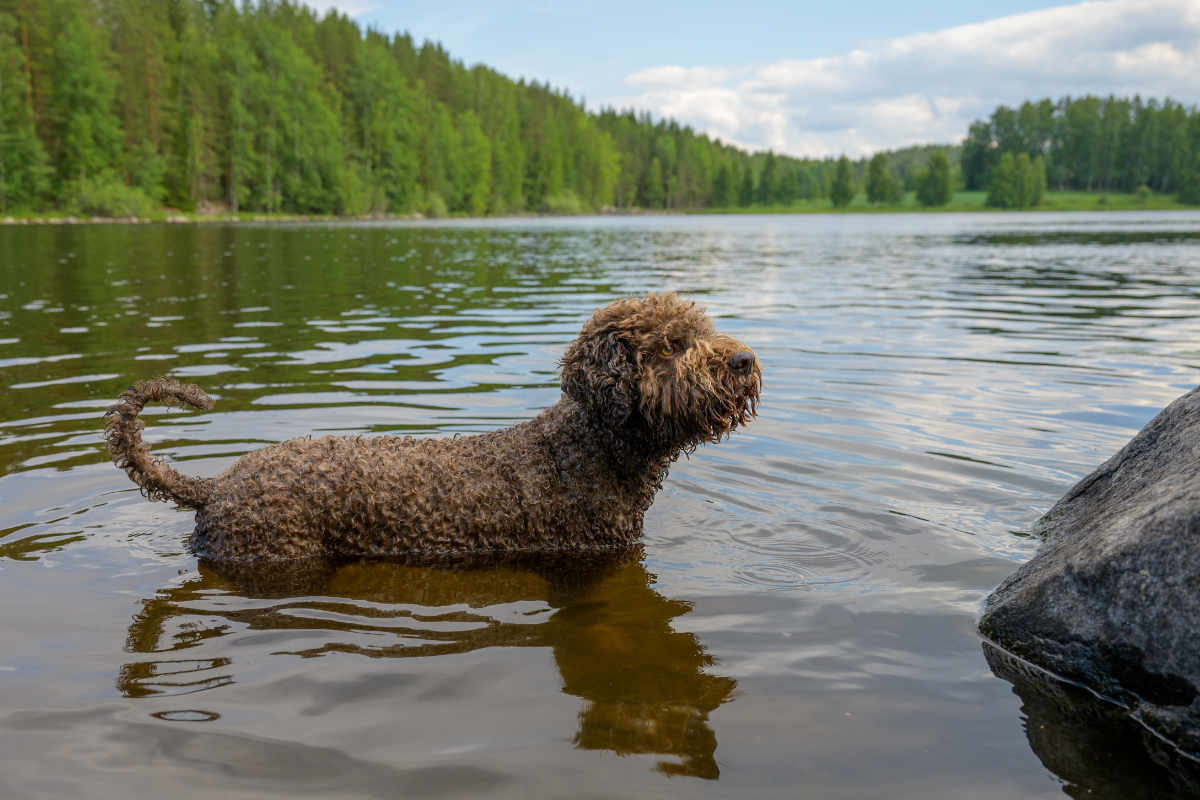 Also known as the Romagna Water Dog, Lagotto Romagnolo are hypoallergenic dogs that have hair rather than fur.

In this article, we’re going to take a look at Lagotto Romagnolo pros and cons to find out what are some of the advantages and disadvantages of owning one of these Italian water dogs.

In this article, we’ll hear from Lupo (@luposniffs), Biscotti (@biscottithelagotti), Apa (@apa.lagotto) and Rona (@lagottorona) who will provide an insight into their experience owning a Lagotto Romagnolo and share some of their photos (with their permission). 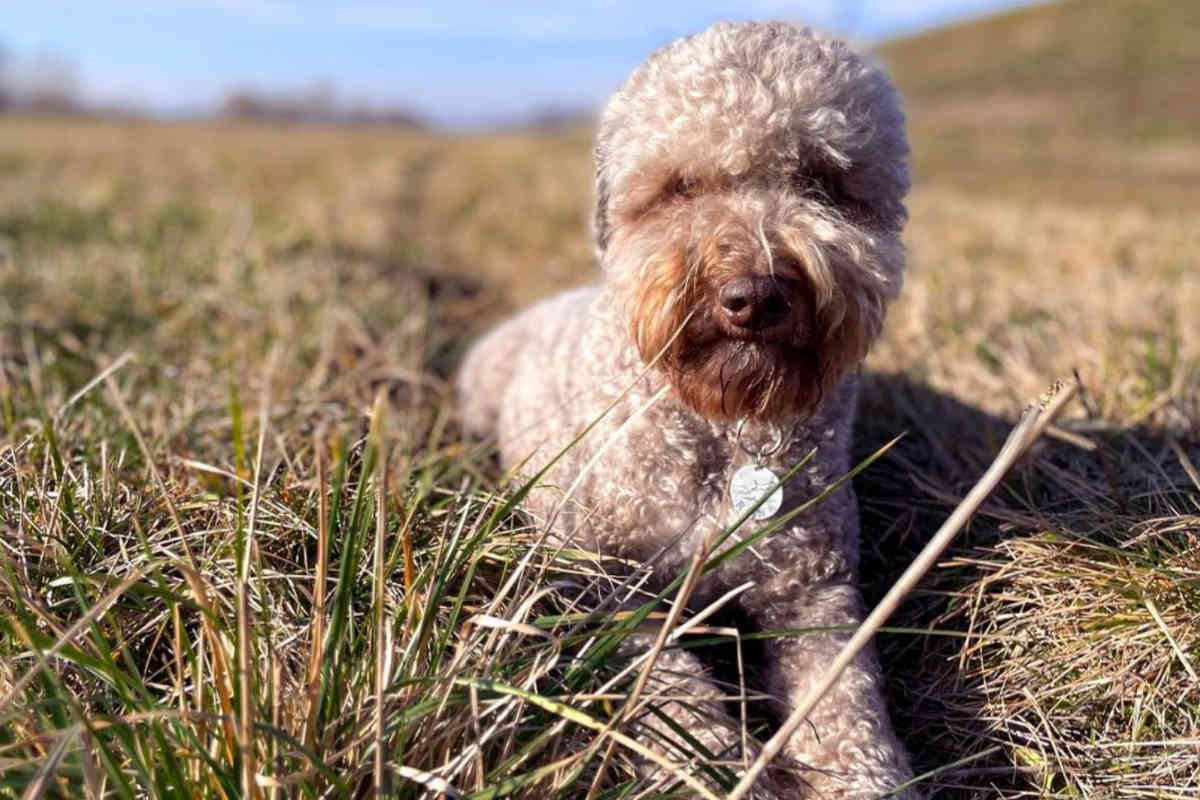 Although the Lagotto Romagnolo wasn’t included in Stanley Coren’s infamous ‘Intelligence of Dogs’ (published in 1993), they’re known as intelligent dogs that are quick to learn new commands. Lagotto Romagnolo are traditionally working dogs so they’re eager to please. These smart dogs can easily pick up new tricks as they’re obedient dogs (most of the time). The AKC write on their website that Lagotti Romagnoli love to learn and please their owners. However, the canine organization recommend early socialization and training to ensure your Lagotto grows into a balance and well-adjusted dog.

One of the common themes we encountered during our research and speaking to Lagotto Romagnolo owners is a potential stubborn streak within the breed. Petra, who owns a Lagotto called Rona, explained more.

They are very smart and they understand everything we say, so sometimes they will be stubborn and test their owners. But they are not hard to train and they love to learn!

Lupo’s owners explained that Lagotto Romagnolo owners will still need to find a style of training that works for their individual dog.

Lupo is very food motivated so it makes some things easier while making others harder. Owners just need to find what works for their dog, no matter what breed. 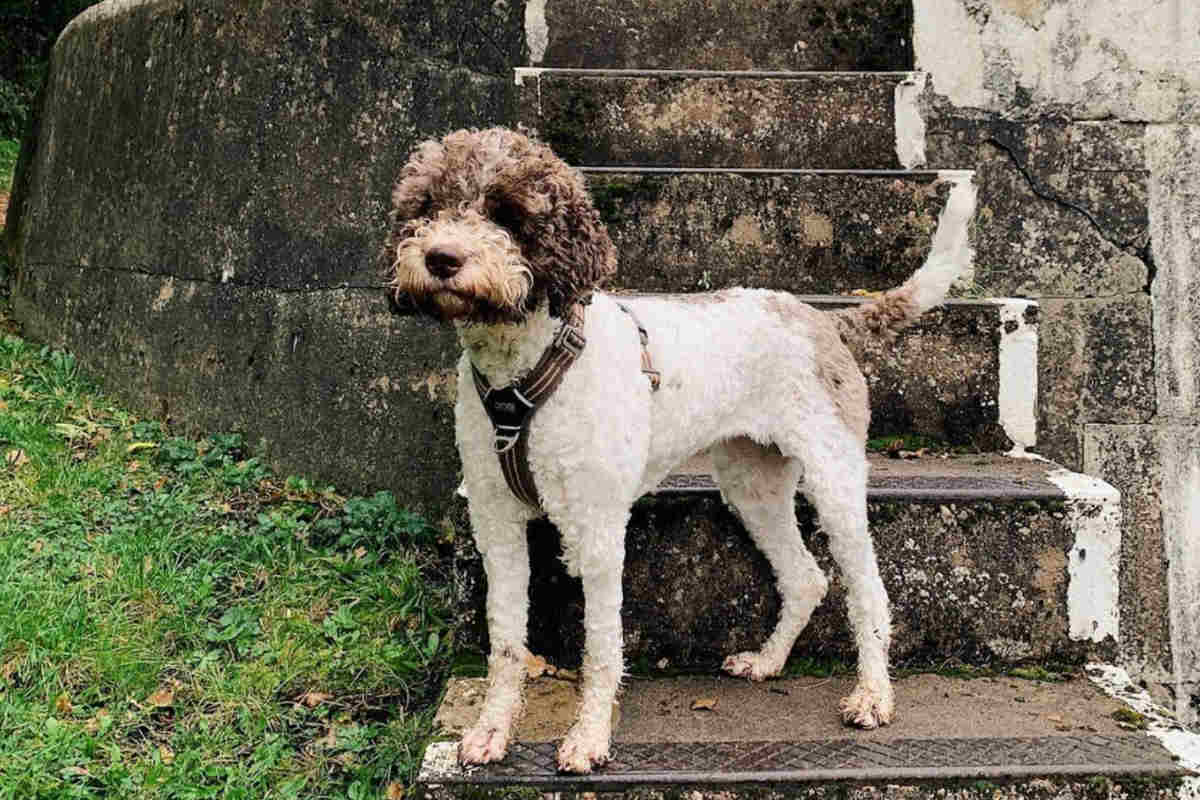 If you’re someone with a lot of energy, the Lagotto Romagnolo will be able to match you stride for stride. These Italian water dogs are perfect for dog lovers who enjoy long walks or hikes in the countryside. Lagotti Romagnoli are adept in the water so they’re not scared of some rain or mud. Of course, you don’t need to be Bear Grylls to own a Lagotto Romagnolo. You’ll just need to ensure your dog gets at least 60 minutes of exercise a day. As truffle dogs, Lagotto Romagnolo will enjoy scent work as well as traditional forms of exercise such as a long walk around the neighborhood.

Wendy and Jo explained that Biscotti gets around 90 minutes of exercise a day.

As a minimum, probably at least 90 minutes per day of physical exercise, preferably off lead; equally, mental stimulation is required to prevent boredom and bad behaviours. If you’re out for a long walk they can walk all day without any issues. They will happily run with you, go on hikes, fetch a ball in the park or (our dog’s favourite) sniff around for as long as you will let them.

Just like all dogs, Lagotto Romagnolo requires daily walks and exercises. One walk should be longer so that the dog can run and play. Lagottti are famous for their incredible sense of smell, so they love games where they can look and sniff for food and that keeps them entertained. 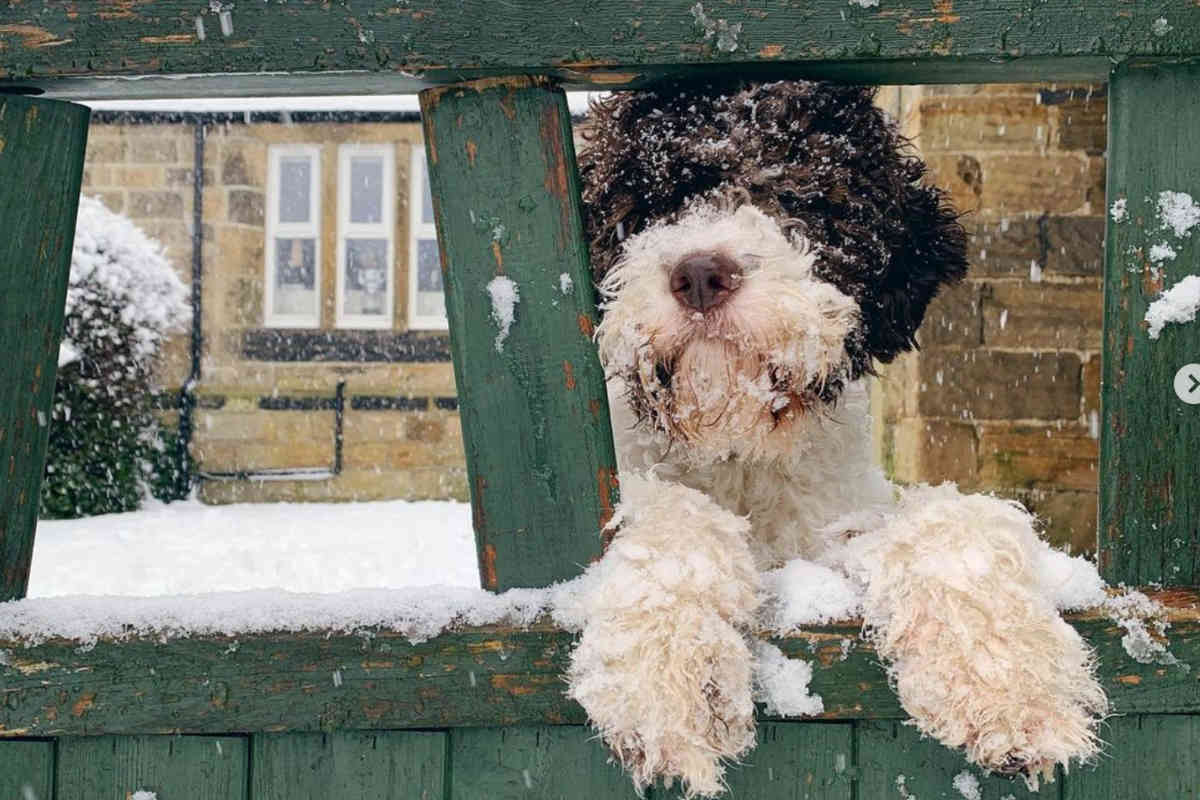 Once exercised, Lagotto Romagnolo will be more than happy to plop themselves next to you on the sofa. These dogs are affectionate and loving with established members of the home. They love to spend time with their family, whether it’s walks, playtime or cuddles on the couch. You’ll find that your Lagotto Romagnolo will love you with all their heart.

Wendy and Jo described the dedicated and loving nature of the Lagotto.

Loves you with all their heart. Will cuddle with you for hours or climb a mountain with you, whatever you want they love spending time with their owner. Looks like a cute teddy bear. 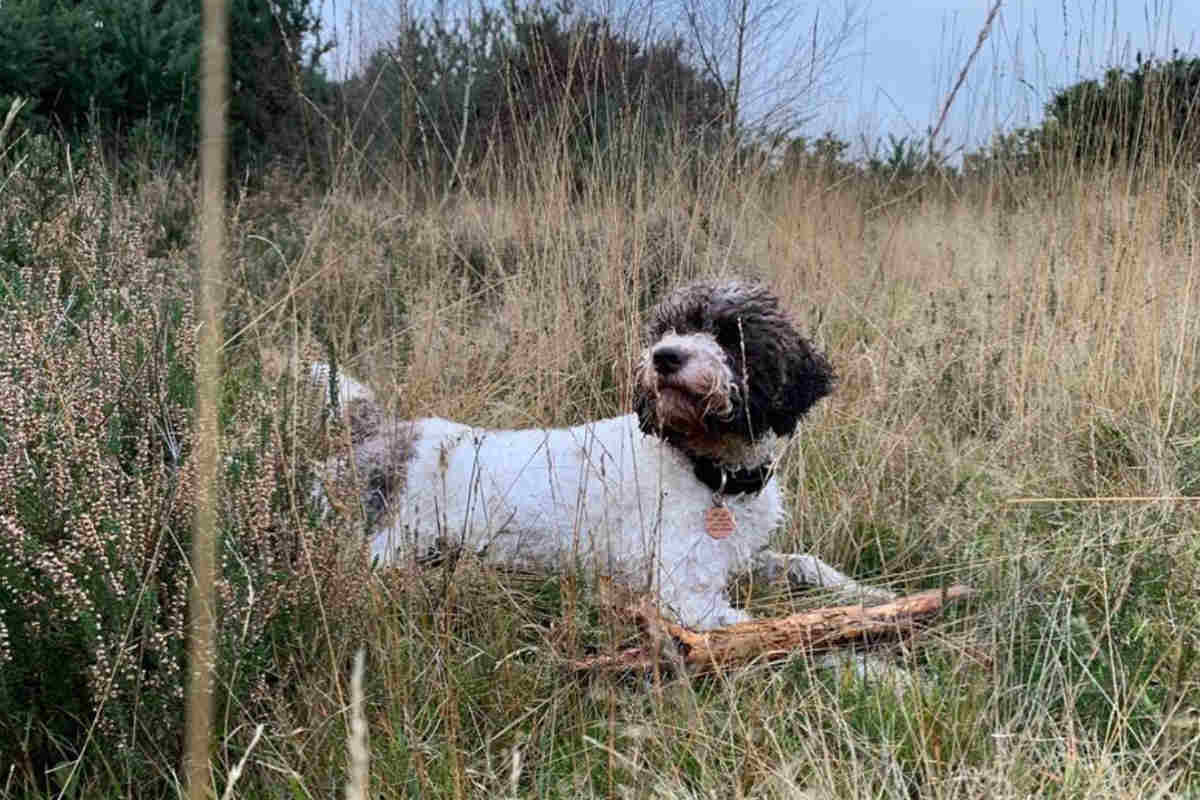 Arguably the biggest pro is the Lagotto Romagnolo’s hypoallergenic coat. These Italian canines have hair akin to humans rather than hair like most other dogs. Therefore, they don’t shed much if at all. If you’re looking for a hypoallergenic dog breed, Lagotto Romagnolo could be a potential option for you. While they’re virtual non shedders, they can still trigger allergies through their salvia, urine or allergens caught in their coat from outside such as pollen.

Wendy and Jo shed further light on the Lagotto’s coat based upon their experience with Biscotti.

They are technically “low shedding” but it’s practically zero. You don’t have hairs on your clothes or around the house which is nice. With that you also don’t get the ‘doggy smell’. 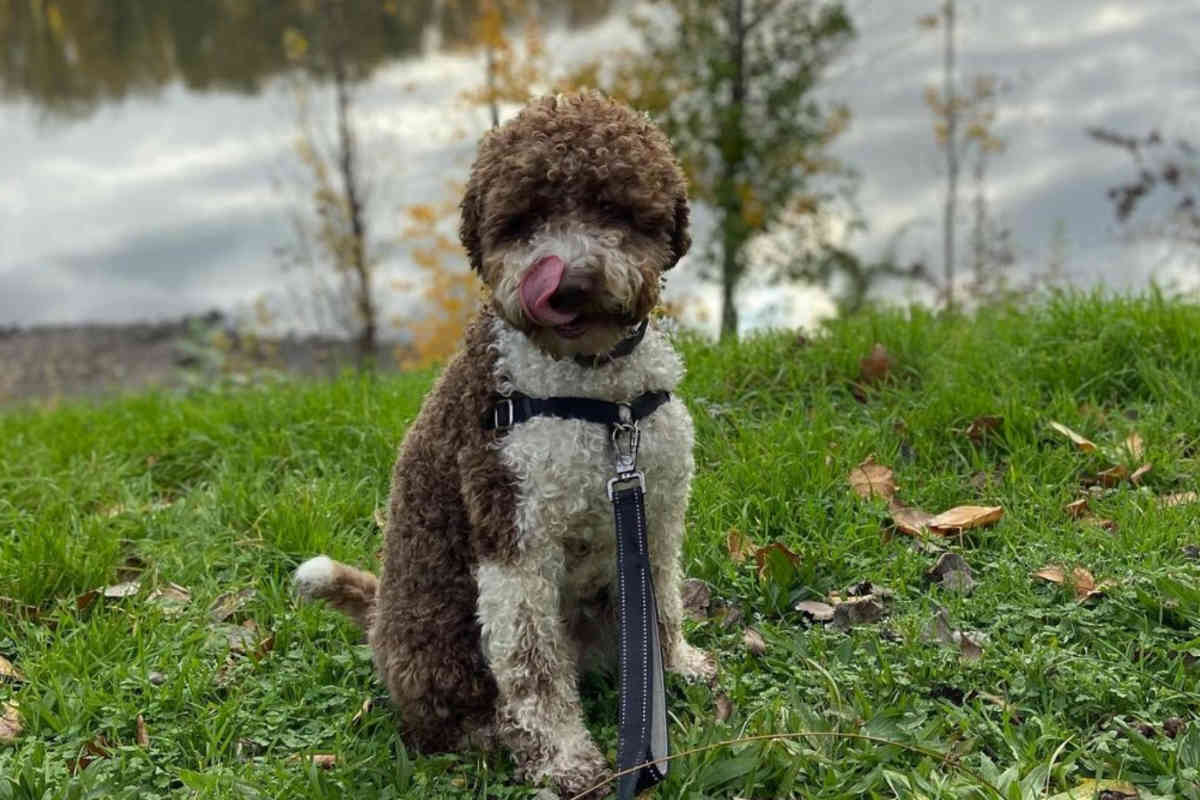 Lagotto Romagnolo can become quite attached to their fellow family members, although sometimes they can become particularly obsessed with one person in the home. Overall, Lagotti have a reputation for being excellent family pets – but every dog is different so please keep that in mind.

Wendy and Jo believe Lagotto Romagnolo can excel in a family setting.

They are extremely friendly and people-oriented. Ours has been incredibly gentle and patient with children of all ages, as is her brother who we see a lot. They have never shown any instinct towards defensiveness or aggression.

Apa’s owner Maria believes raising a Lagotto Romagnolo puppy along with children will increase the chances of a harmonious home.

In general, yes [they’re family-friendly dogs]. However, they can get very protective of their person, even with children. But if they’re raised in a family where there are small children they should be fine. (if a mother is crazy enough to raise a lagotto and a baby at the same time!).

Lupo’s owner emphasised that the degree of family-friendliness will depend on each individual Lagotto Romagnolo.

It really depends on the individual when it comes to kid-friendliness and pet-friendliness. Some are amazing family dogs while others are fearful of kids or other animals. Lupo is definitely in the middle of that broad spectrum. He’s picky with what people he likes, depends on the adult or kid (he usually prefers older kids). 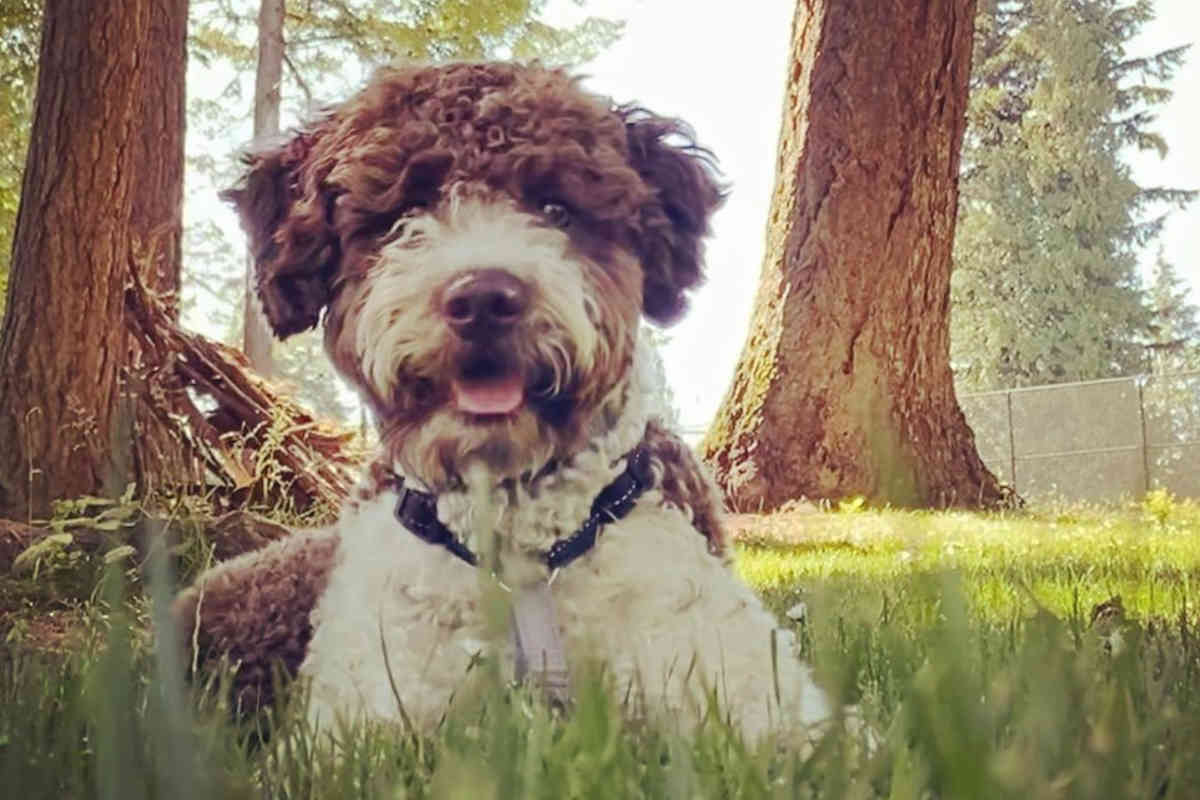 These dogs can sometimes be too smart for their own good and it was a common theme in our interviews with Lagotto Romagnolo. Nearly all the Lagotti owners that we spoke to warned that these Italian dogs will try to outsmart their humans if they’re given the chance to!

Biscotti’s owners Wendy and Jo had a word of warning for new Lagotto owners.

They are smart, meaning they will pick up bad habits just as quickly as good ones if you aren’t careful; the learning and training doesn’t really stop.

Maria revealed she found Apa challenging too train due to his high intelligence levels.

In my opinion, because they are so smart, it’s harder to train them as puppies. They don’t just hear a command and do it… they think about it, and contemplate all options… but with consistency and positive reinforcement they learn almost anything, from tricks to jobs… Remember, they are a working breed, so they need a job, otherwise they get troublesome and because of this, they are often not recommended to first time dog owners. They need a lot of training (every day) and consistency. 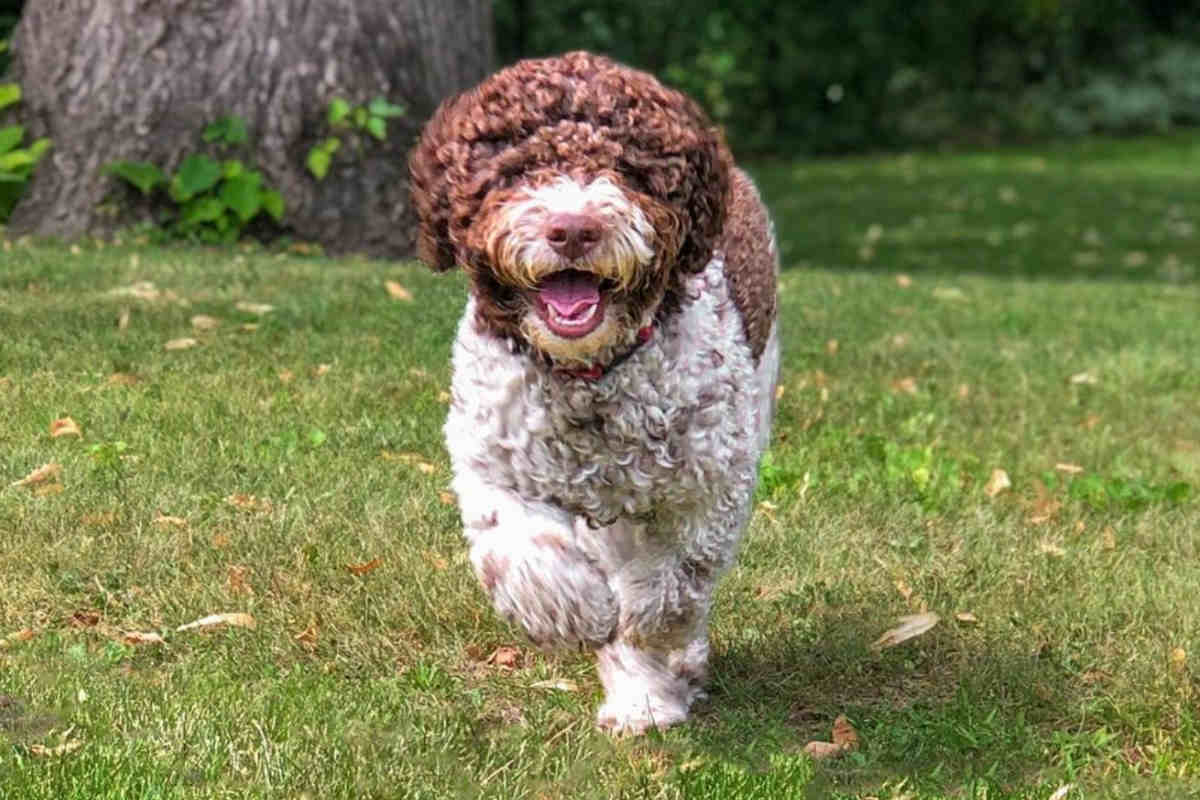 While Lagotto Romagnolo don’t shed, they require a lot of grooming. They’ve got a wool-like coat with tight curls so it’s important to brush your Lagotto as much as possible to prevent matting. While owners will be required to follow a regular grooming schedule at home, Lagotto Romagnolo will need a trip to a professional groomer for a haircut every few months. It’s something you’ll need to budget for when weighing up whether you can afford to own one of these water dogs.

Lupo’s owners provided an insight into their grooming schedule.

We try to brush Lupo a few times a week. Slicker brush, then a nice comb afterwards. In the upcoming year, we have decided that Lupo will be shaved once every season. They require a pretty decent amount of grooming but they always look adorable afterwards.

Biscotti’s owners explained that the length of the coat will have a direct impact on the amount of grooming required.

The amount of grooming depends on how long you have their coat. Some people will have them clipped short regularly which required less day to day maintenance. If their coat is longer then you need to stay on top of combing and brushing it to prevent matts. They can also have issues with hair in their ears so staying on top of that is essential. 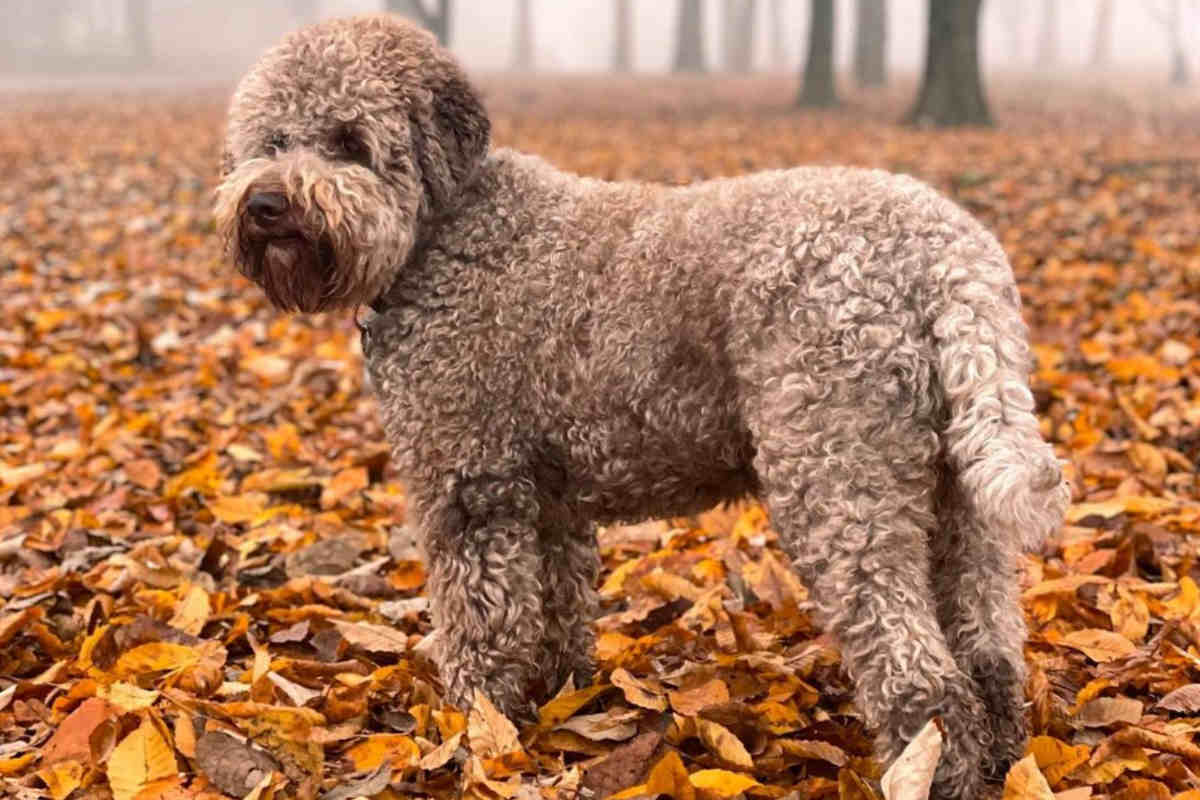 All but one of our Lagotto Romagnolo owners mentioned a shyness around strangers. The Lagotti can be wary of people they don’t know, which makes them excellent watch dogs. It’s a good idea to start socialization from a young age to try to get your Lagotto Romagnolo used to meeting new people.

Rona’s owner Petra touched upon this trait in her interview.

Smart and loyal, but often shy with strangers. They are usually not dogs that will go to strangers for petting. Great guard dogs. 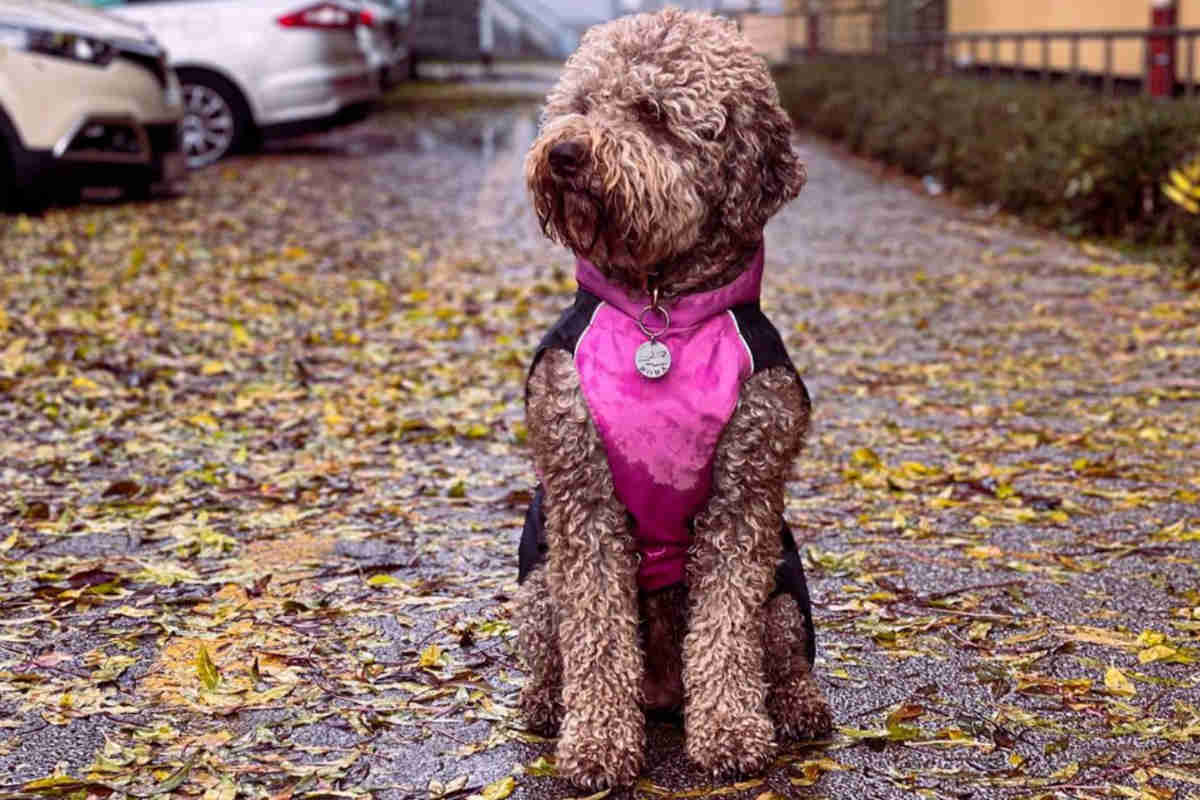 Lagotto Romagnolo can be vocal dogs. They’re alert to movements outside the home and they’re not afraid to raise the alarm if required. If they’re concerned about something such as a strange noise outside, then they’ll let their owners know about it!

They are very vocal dogs so they will bark and whine and let you know if they want something or if they hear something. 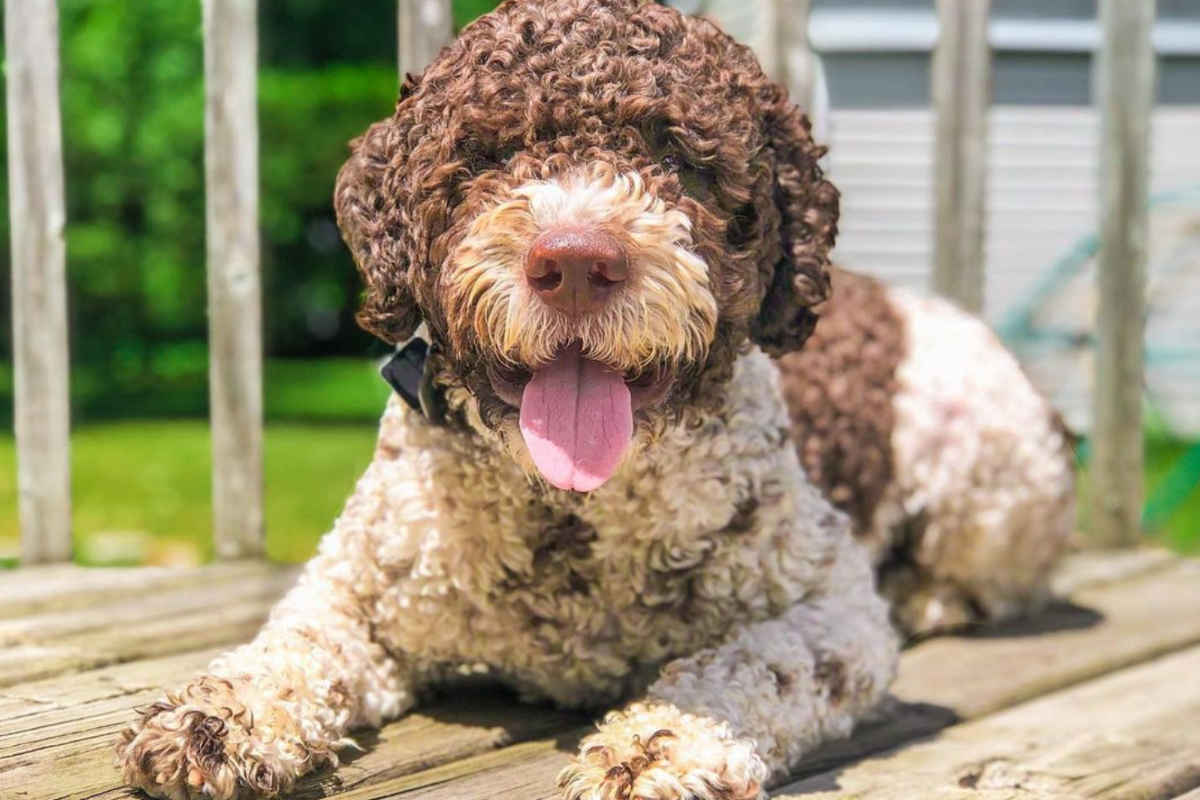 If you’re an active person, you’ll probably thrive alongside your Lagotto Romagnolo. But if you don’t have the time to take these Italian dogs for daily walks of between 60 and 90 minutes, they may not be the breed for you. They require both mental and physical stimulation, which demands time!

Lupo’s owner explained that their Lagotto is a more relaxed member of the breed but still requires a lot of exercise.

Lagotti require a decent amount of physical and mental stimulation to keep them content. Lupo is definitely one of the more relaxed ones and even at that, he needs 1-2 walks, mental stimulation and usually a game of fetch. Once they’ve had some stimulation, mental and physical, they’re usually content to lay down by your side or curl up on the couch.

If you’re thinking about getting a Lagotto, you’ll need to be prepared for the initial cost of purchasing your pup (if you’re unable to find a rescue). Lagotto can cost anywhere between $1000-$10,000 depending on the breeder, the parents, gender and color. The average cost of a Lagotto pup appears to be around $3,000-4,000. Aside from the purchase price, you’ll need to budget for toys, vaccinations, neutering and spaying (if it’s part of the contract with breeder), grooming essentials and trips to a groomer.