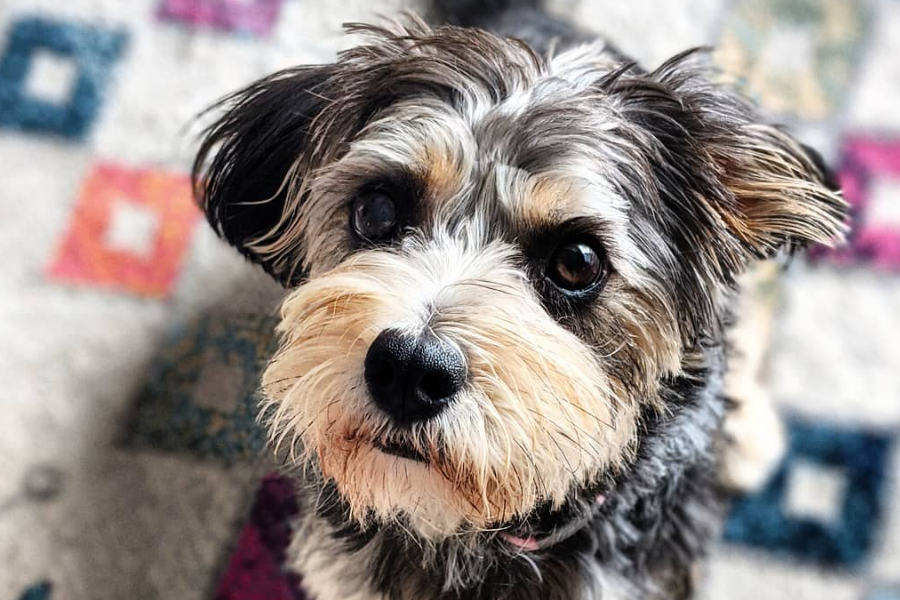 The King Schnauzer is a cross between two popular dog breeds.

They’re a mix between a Cavalier King Charles Spaniel and a miniature or toy Schnauzer.

By combining these two breeds, you’ll get a companion-sized dog with a friendly and playful personality.

They’ll usually enjoy spending time with their pet parents or romping in the garden with their family members.

While the King Schnauzer is considered a designer dog, it’s worth remembering there’s no guarantees which traits a mixed breed will inherit.

In this article, we’re going to learn more about King Schnauzers thanks in part to our contributors Darcy (@welove_kingschnauzers) and Ernie (@kingerniesch).

What is a King Schnauzer? 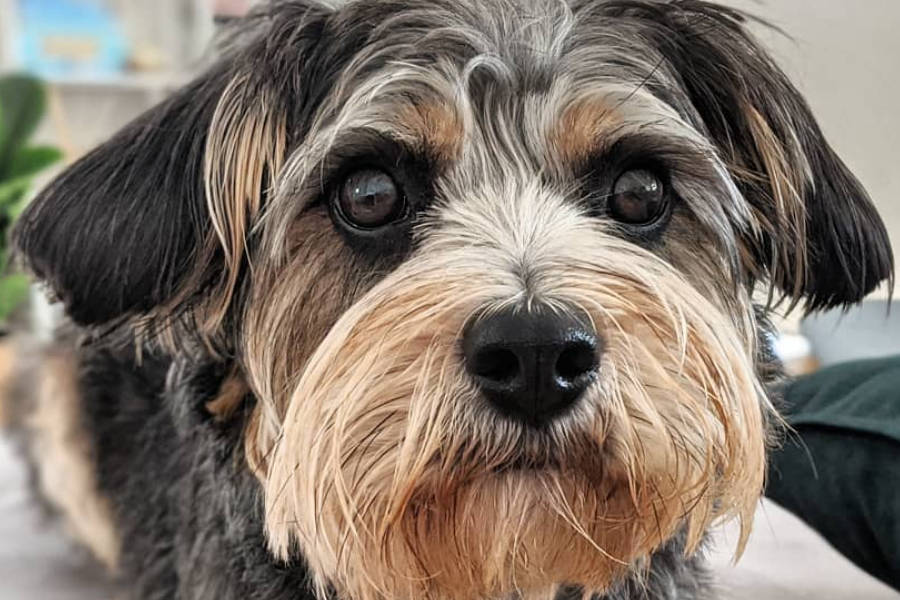 As we touched upon above, the King Schnauzer is a cross between a Cavalier King Charles Spaniel and a miniature or toy Schnauzer.

King Schnauzers are usually a small-to-medium sized mixed breed, although this can depend on the size of the Schnauzer crossed with the Cavalier parent. Usually a breeder will use a mini or toy Schnauzer. They’ll usually grow to a height range between 10 and 14 inches or weigh between 12 and 20 pounds.

He’s around 8kg, but only six months old. He is expected to be around 10-12kg and a similar size to Cocker Spaniel. 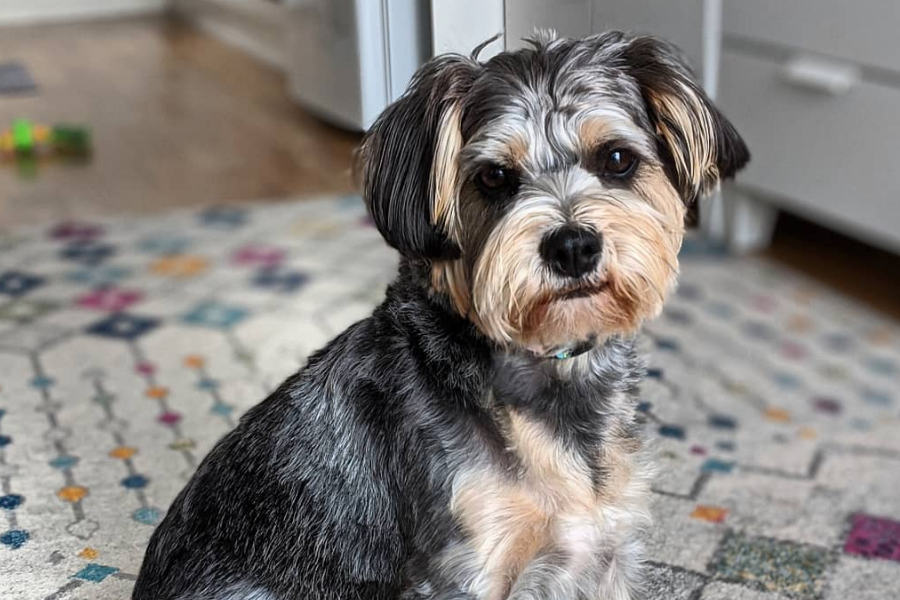 The King Schnauzer will have appearance characteristics that are reflective of both parents. They’re ears will medium-sized and flap down onto their face. Their coat will usually mirror the Schnauzer parent in texture but the coat colors and patterns can incorporate features of both breeds.

We asked Darcy (@welove_kingschnauzers) to describe the appearance of her King Schnauzer to give helloBARK! readers a better insight into the mixed breed. She told us:

Cute! She has the Schnauzer beard and wiry hair, with the softness and body shape of the Cavalier King Charles Spaniel. She ended up a little bigger than I expected (12kg at 2 years of age) but she is perfect.

In a bid to learn more about their personalities, we asked Darcy (@welove_kingschnauzers) to shed light on her King Schnauzer. Here’s her fantastic insight into the cross breed.

She is very sweet natured, affectionate, cheeky and playful. She loves playing fetch and is the best chewer I’ve ever met (invest in deer antlers or very robust chew toys!). She was easy to train as she is very food motivated! She walks very well on the lead, not pulling (I didn’t have to train her to walk well). She can be protective of me if we meet other dogs while she is on the lead, and I have had to train her out of barking and lunging in these situations. She gets along well with other dogs at the dog park, but can be timid at first with new dogs or boisterous dogs. 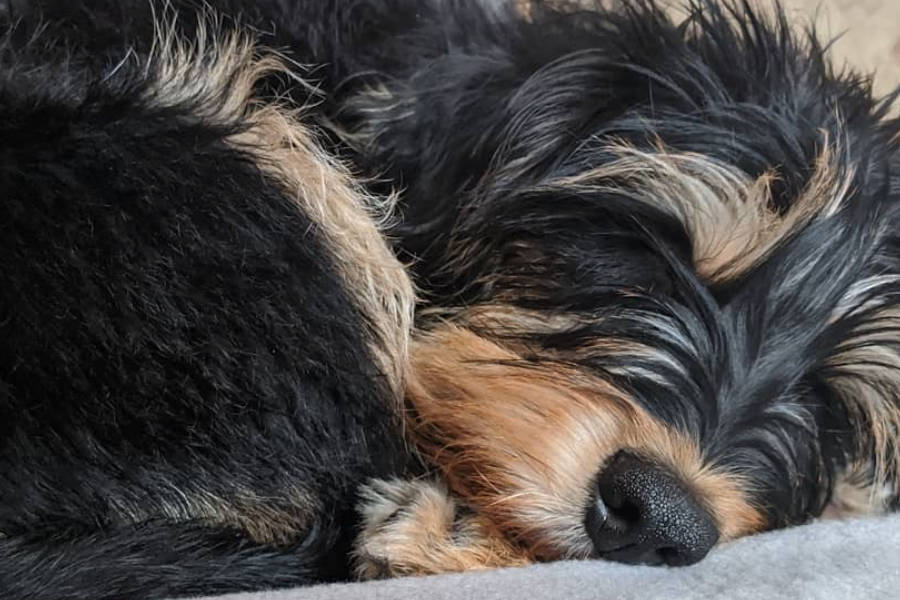 Separation anxiety is a chronic canine disorder that can affect dog, irrespective of their breed or cross breed. It occurs when pet owners leave their dogs at home alone. The symptoms include persistent barking, howling or whining, destructive chewing and digging, or even in some extreme cases, defecating and urinating. There’s also the silent sufferer who may inwardly be struggling without outwardly displaying some symptoms.

I haven’t had a problem with this, but my house is well puppy-proofed and I distract her with treats as I am walking out the door. If I don’t go through the right routine as I’m leaving, she does yap for a while after I’m gone.

King Schnauzers are a mix breed that make great companion pets. They like to be around their pet parents and spending time within the family unit. This is a trait that is attributed to Cavalier King Charles Spaniels. Darcy (@welove_kingschnauzers) underlined this point.

She is very cuddly and sleeps as close to me as she can get at night.

The Cavalier King Charles Spaniel is a dog breed known for being great family pets due to their outgoing and playful personalities. They’ll enjoy some exercise with their fellow family members in the garden or yard. Schnauzers are a robust breed that can also make a great option for families looking to add a pet to their home.

We asked Ernie (@kingerniesch) about the cross breed’s suitability as family pets.

He is a quick learner, playful and cuddly. Exactly what we were after. He has not chewed any of our possessions and took to toilet training very well. He is not a fan on his crate, but is improving with time. He is incredibly social, wanting to say hello to all people and dogs we meet. He is very good with children, he recently met a three-month old and regularly interacts with the toddler next door to us. He is not food-orientated, which provides some worries about him eating enough, but mostly means he doesn’t scavenge. He does love treats, cheese and tuna though.

Are King Schnauzer easy to train?

The miniature Schnauzer is ranked as the 12th most intelligent dog breed in the world, according to Stanley Coren’s Intelligence of Dogs. You’ll find the Cavalier King Charles Spaniel at number 73. Overall, the designer breed do appear to be relatively smart dogs. While the miniature Schnauzers has IQ on their side, Cavaliers do have an underlying desire to please their dog owners.

How much exercise do King Schnauzer need? 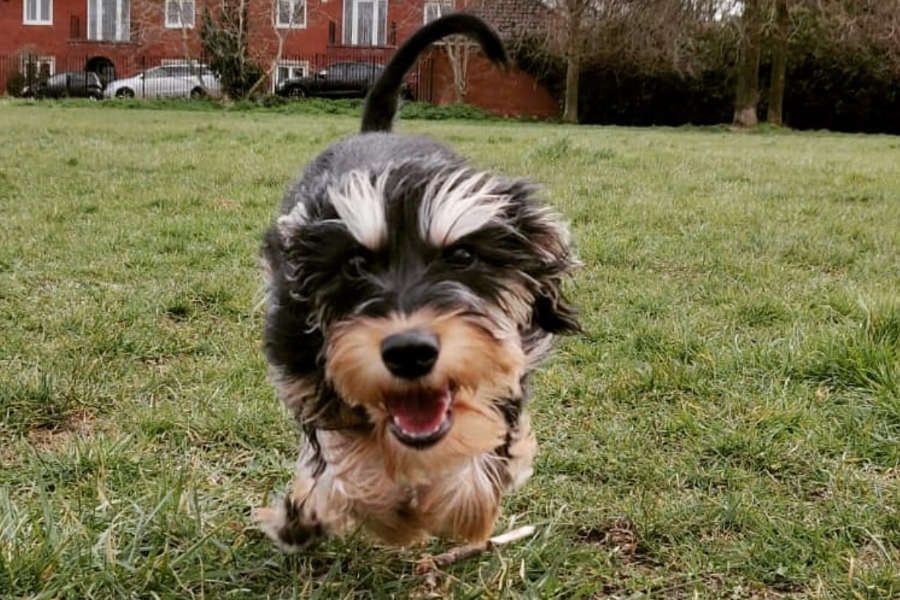 Overall, the Schnauzer is considered a slightly more energetic breed than the Cavaliers. Wag Walking write that the King Schnauzer has high energy needs, recommending around 60 minutes of exercise a day. They’ll benefit from regular trips to the dog park, a couple of walks a day, or even a jog with their pet parent.

Here’s what Ernie (@kingerniesch) has to say about it:

He has his moments like all puppies! Mostly he is just happy to be around us and have cuddles or play with (or often destroy!) his toys. 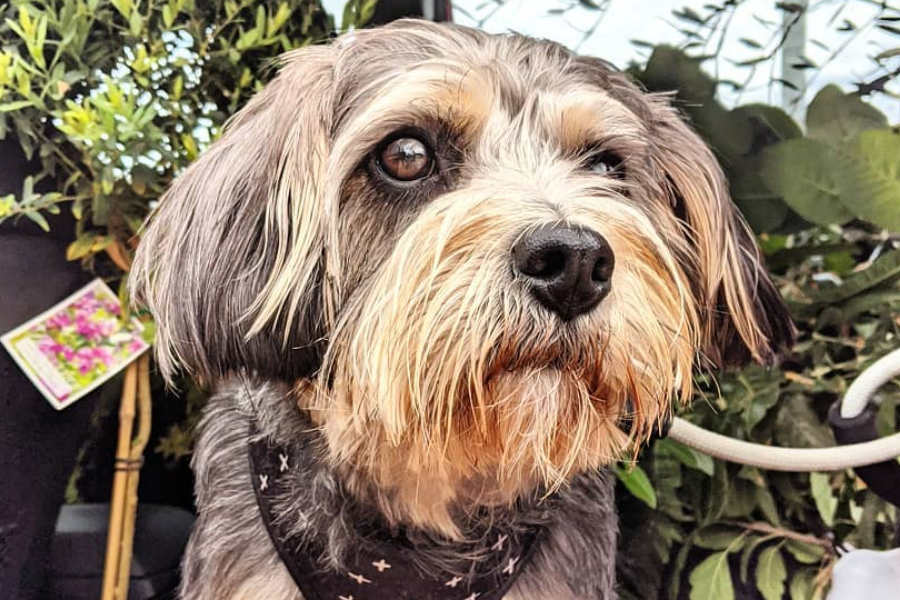 Like we mentioned above, Cavalier King Charles Spaniel do shed quite a lot. They’ll usually shed twice a year, while they could blow out their coat at the changing of the seasons. The King Schnauzer is likely to shed less than a Cavalier but it’ll depend on whether their coat is more similar to the Cavalier or the Schnauzer.

King Schnauzer need to be brushed regularly to remove dead hair from their coat. This can prevent their coat becoming tangled or matted as well as stop potential infections. Some King Schnauzers that take after Schnauzer parent could be more hypoallergenic.

This is a question that a lot of potential King Schnauzers will want to learn more about so let’s hear from Darcy (@welove_kingschnauzers).

Do King Schnauzer have any health problems? 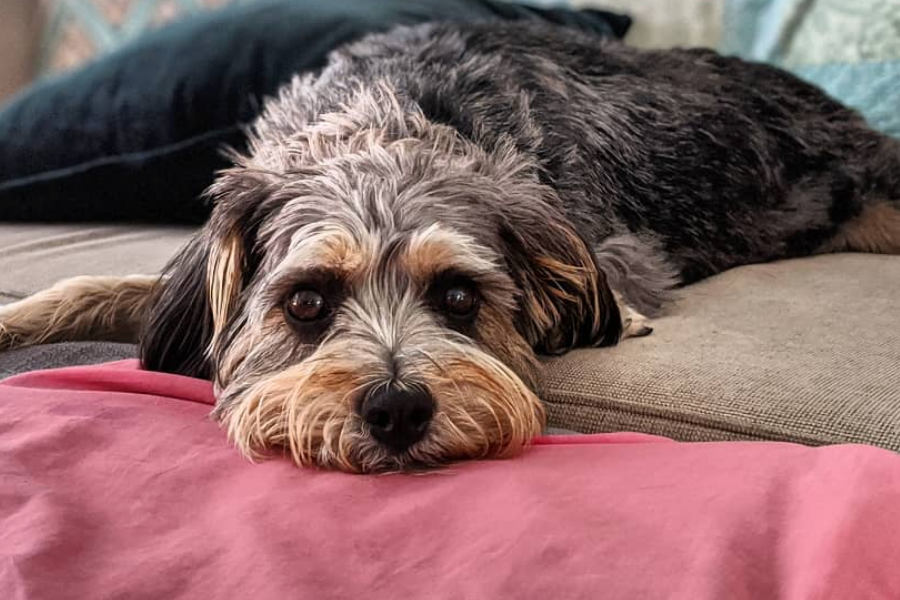 Cross breeds are pretty healthy dogs due to the mixture of genetics from both breeds. However, not all the health issues are known because some of these designer breeds are still in their relative infancy.

Some of the potential health problems that could affect King Schnauzers include diabetes, pancreatitis and canine cushing’s disease. You should also be aware of patellar luxation, distichiasis, cataracts, retinal dysplasia and bladder stones. 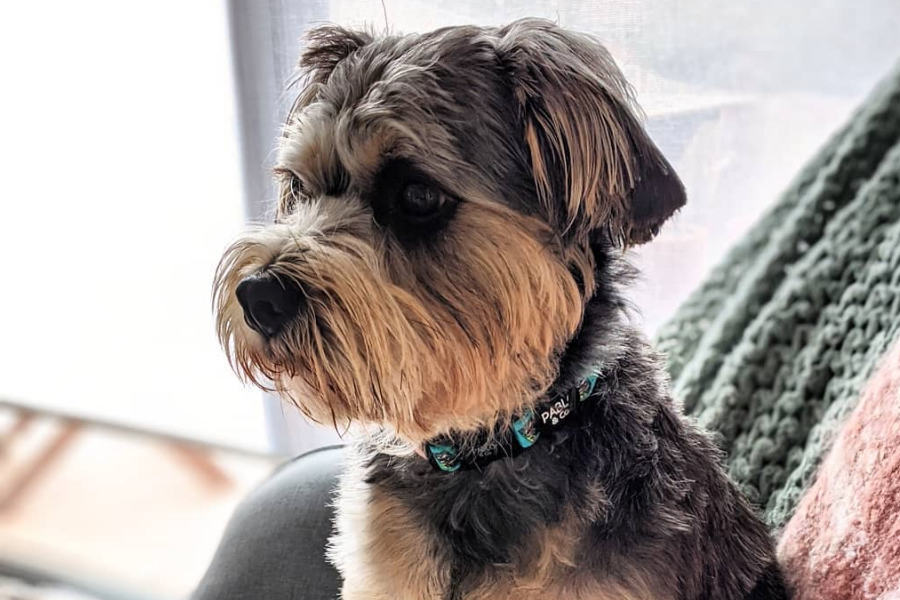 While there’s the initial cost of buying your King Schnauzer from a breeder, you’ll need to consider other costs such as food, pet insurance, vet bills, toys and treats. You can check out the best pet insurance options in the USA and the UK. We asked Ernie (@kingerniesch) to give an insight into the costs of owning this cross breed.

We paid £500 to the breeder and then we have a monthly plan with the vets for initial shots and check ups, flea and worming. That’s about £13 a month. 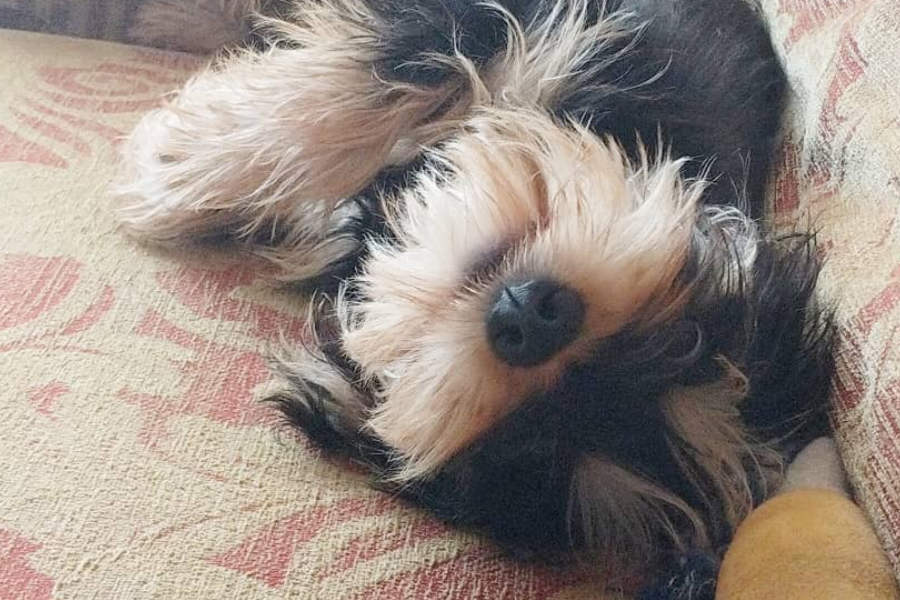 So you’re probably wondering whether King Schnauzers are suitable to first-time owners. Here’s what Ernie (@kingerniesch) had to say.

Yes, because they are easy to train, very sweet natured and playful. She quickly formed a strong bond with me, and is gentle with children.

If you’re looking to learn more about King Schnauzers, here are some accounts to check out. 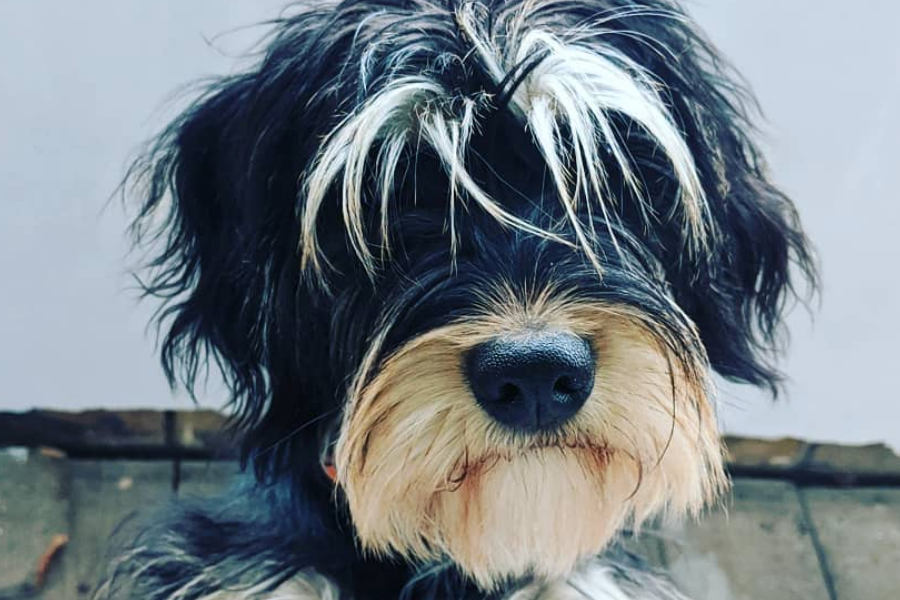 We’ve reached the end of our feature on King Schnauzers. They’re a cross breed with features that are reflective of both the Cavalier King Charles Spaniels and miniature Schnauzers.

They’re a companion-sized dog breed that like to be around their pet parents. Usually this hybrid dog is a friendly, playful and sociable mixed breed.

King Schnauzers are likely to be energetic dogs that will require a lot of exercise, while they could shed less than Cavaliers.