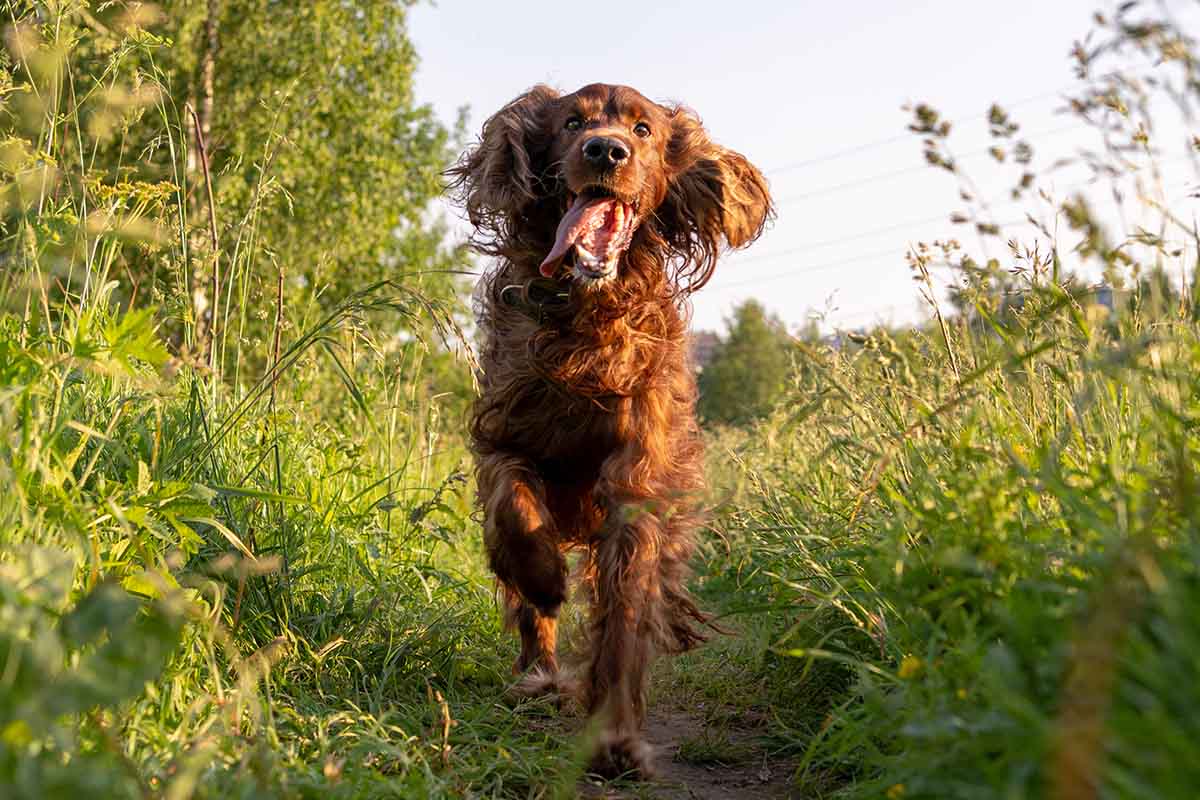 By Kieran Beckles
Updated on 13 October 2022

Are you thinking about getting an Irish Setter but you’d like to know more about the pros and cons of this beautiful dog breed?

The Irish Setter is one of a number of Setter dogs that were traditionally used by Irish hunters in pursuit of birds and game.

However, these cheerful, loving and playful dogs can also make great family pets in the right environment.

Recognised by the American Kennel Club as a dog breed in 1878, the Irish Setter is the 71st most-popular dog breed in the USA.

The respected dog organisation describe the dog breed as being “a high-spirited gundog known for grace, swiftness, and a flashy red coat” but “famously good family dogs”.

In this article, we’re going to take a look at Irish Setter pros and cons, highlighting some of the advantages and disadvantages of the breed.

With the introduction complete, let’s examine in close detail some of the pros and cons of owning an Irish Setter. 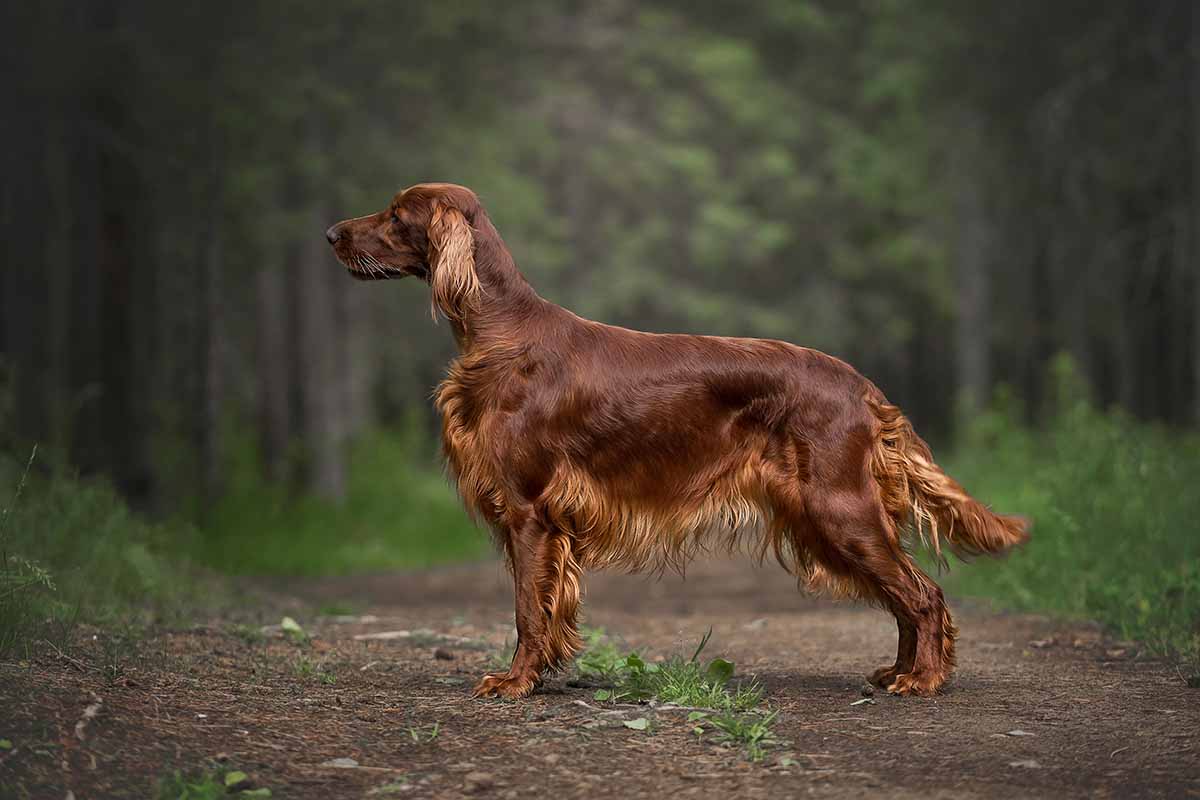 As highlighted by the AKC in the introduction, the Irish Setter is a dog breed that is well-known for being an excellent member of the family. They go on to add that Irish Setters make for “famously good family dogs: sweet-tempered companions for the folks, and rollicking playmates and tennis-ball fetchers for the children”. Indeed, the organization gives them a glowing five-star rating for being affectionate with the family, good with young children and good with other dogs. So if you’ve got children or other pets, the Irish Setter will likely be a good fit with the right socialization and training. But please remember, even these famously good family dogs should never be left alone with young children.

The first thing that comes to mind with Irish Setters is their wonderful ruby-colored coats. This is the trademark of the breed. Their coat color is described as being mahogany or chestnut and the feathering promotes the breed’s swift appearance. According to the breed standard, Irish Setters should have a straight, fine, glossy coat, longer on the ears, chest, tail and back of the legs. The coat should be as straight as possible, free from curl and wave. If you decide to go with an Irish Setter, you should be prepared for your dog to get lots of attention.

If you want a dog that will make you laugh with their silly antics, you need look no further than the Irish Setter. These dogs have an elegant appearance but goofy personalities. Described as being “big kids at heart”, it’s little surprise that Irish Setter can take a little longer to mature than other dog breeds. They’re friendly dogs who like to meet new people and other dogs but they’ll ultimately crave attention from their family members and enjoy their company the most.

A Reddit user explained that Irish Setters maintain their puppy mentality for quite some time into adulthood.

They are so fun and have really goofy and loving personalities. They maintain their puppy personalities for a good 3-4 years before starting to settle down. They have a lot of energy, but can have a good off switch in the house. 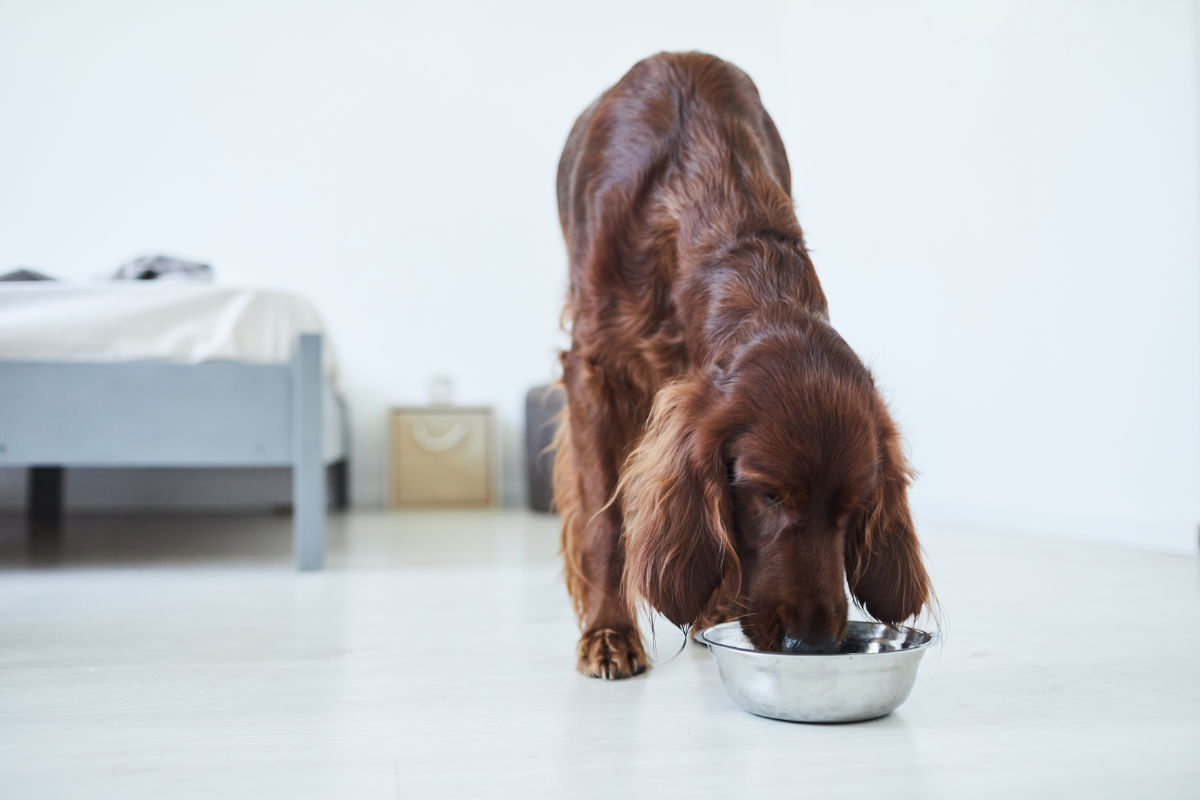 While Irish Setters are sometimes described as being unintelligent or untrainable, that’s perhaps a reflection of what the AKC describe as a “devil-may-care” attitude to work. In fact, the Irish Setter is ranked as the 35th most popular dog breed by the famous book on canine IQ called The Intelligence Of Dogs. In theory, they should understand new commands in 15 to 25 repetitions and obey the first command 70% of the time or better.

A former Irish Setter explained why all members of the breed being stereotyped as “bimbos” isn’t accurate.

They have a reputation of being bimbos and I’ve had people stop me while out on walks to tell me about the dumb IS they grew up with, but this wasn’t my experience at all. You can find a breeder who does dog sports like agility to hedge your bets on getting a smart dog.

Love agility and being outside

Irish Setters are an active dog breed that like to be able to roam outside. As a hunting dog breed traditionally developed to locate birds and fowl, it’s nor surprise that they like to put their brains and sense of smell to use. If you’re thinking about bringing an Irish Setter home, you may want to consider agility sports or competitions that can engage your dog’s instincts. The AKC suggest activities such as obedience, tracking, agility and rally.

Irish Setters will enjoying giving and receiving affection from their family members. They’re a loving dog breed with other members of the home. Although they’re medium-sized dogs, they’ll be happy to cuddle up on the sofa or relax in the evening (especially once they’re 3 or 4). Of course, every dog is different so some Irish Setters will be more inclined to be affectionate than other members of the breed.

Irish setters are the most affectionate dogs I’ve ever been around. They can be wild puppies but once they hit two or three they’re just big cuddle bugs who can’t bear to be too far away from their humans. I’ve had several different kinds of dogs in my life, none has ever given me the level of love that I get from my two Irish Setter. 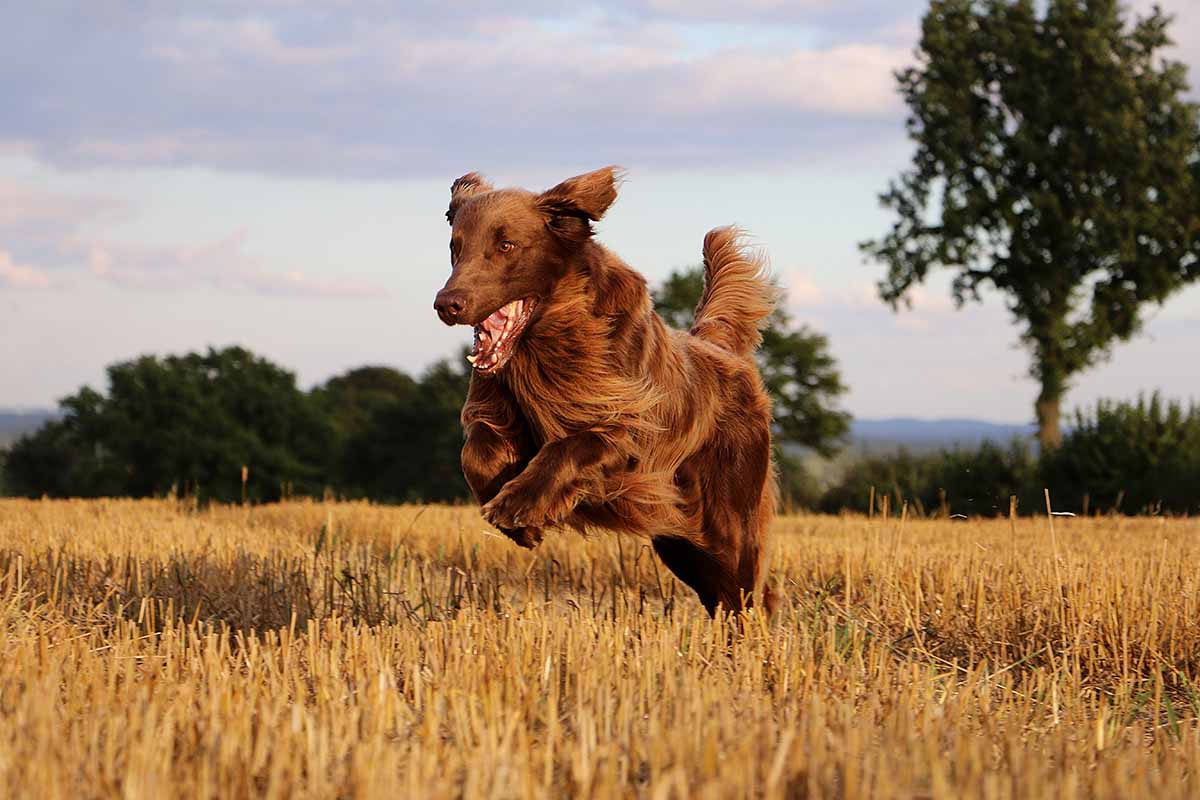 Irish Setters aren’t “bimbos” but they do have an issue with obedience. They’re a high-spirited breed that don’t always listen to commands, especially if they’re exploring outdoors. It’s in their nature to be outside. While they’re quite a smart dog breed, they can be independent thinkers and inconsistent listeners. As a result, you may encounter some issues with obedience. That’s why it’s a good idea to start training from a young age to increase your chances of having a well-behaved dog. Obedience training can help to counter their mischievous personalities.

Need a lot of exercise

Irish Setter will require around 90 minutes of exercise every day, according to dog-walking experts WAG. If you’re looking for a dog breed with low exercise requirements, the Irish Setter isn’t a fit. They can easily wrack up 15 miles a week if Irish Setter owners have the time to dedicate to exercising their dogs. You can engage your Irish Setter’s mind with short training sessions. This gentle breed will do better with positive reinforcement training in quick bursts.

It shouldn’t be a surprise that Irish Setters have a high prey drive seeing as the breed was developed to hunt and set in the field. It’s in their DNA to pursue birds and other small guinea fowl. Therefore, you’ll need to keep your Irish Setter on a leash if you’re walking in an area with potential animals of interest and you don’t trust their recall. Irish Setters will need to make sure their garden or yard is escape-proof in the event that your dog fancies wandering off.

A Reddit user with experience of Setters shared his expereince.

Running hard and finding birds is going to be more rewarding than listening to you 100% of the time when outside. For my family, this is not a problem because we’re not in situations where the dog needs to be kept in close range and recalled constantly.

Continuing on from our previous point, Irish Setters are inconsistent when it comes to recall. This is an issue that Irish Setter owners have encountered with their dogs so it’s a particular area of training that you’ll want to dedicate significant time to. While I don’t own an Irish Setter dog, I’ve got experience with dogs who have poor recall. I prefer to keep them on leash because it’s safer. Irish Setter owners may find it beneficial to invest in a dog tracker if they do plan to allow their dog off leash so you can monitor your Setter’s whereabouts at all times.

Another experienced Setter owner highlighted the importance of recall.

Training recall can be a challenge, but it’s doable. It’s also pretty much a necessity, since running off lead is important to these dogs’ happiness. Setters are also slower to grow up than other breeds, with what seems like a very protracted adolescence. They can be pretty rowdy and incorrigible until age 2-3. 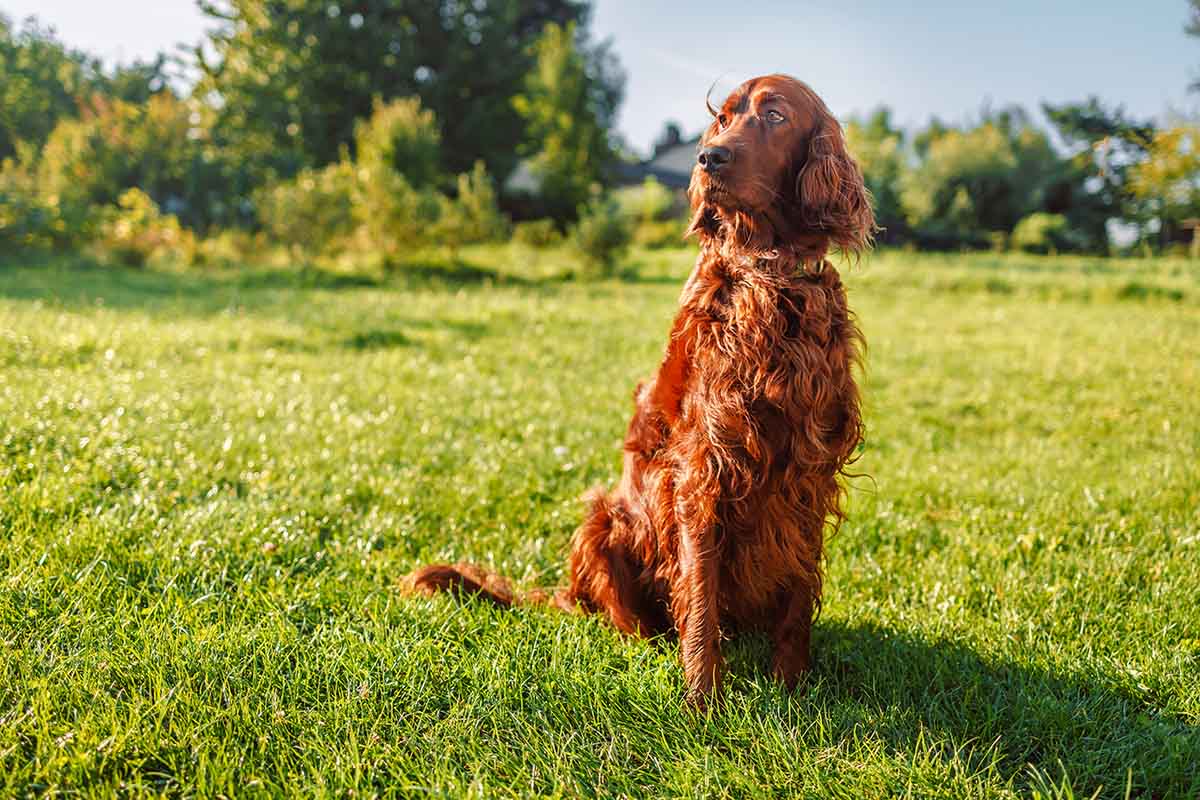 If you choose a setter be aware they suffer from spay coat really bad and you’ll ruin the coat of arguably the most gorgeous dog on the planet if you spay or neuter.

We found plenty more examples of Irish Setter owners who raised this as a topic for consideration and discussion with your breeder and vet.

Another Reddit user with experience of owning an Irish Setter said:

Their beautiful flowing coats can turn frizzy and dull after they are altered and I believe it’s true of all Setters. Possibly related to the “spay coat” but mine actually shedded very little. The breeder I know mentioned that some have a single coat and others have a double coat, so I guess it just depends where you get yours from.