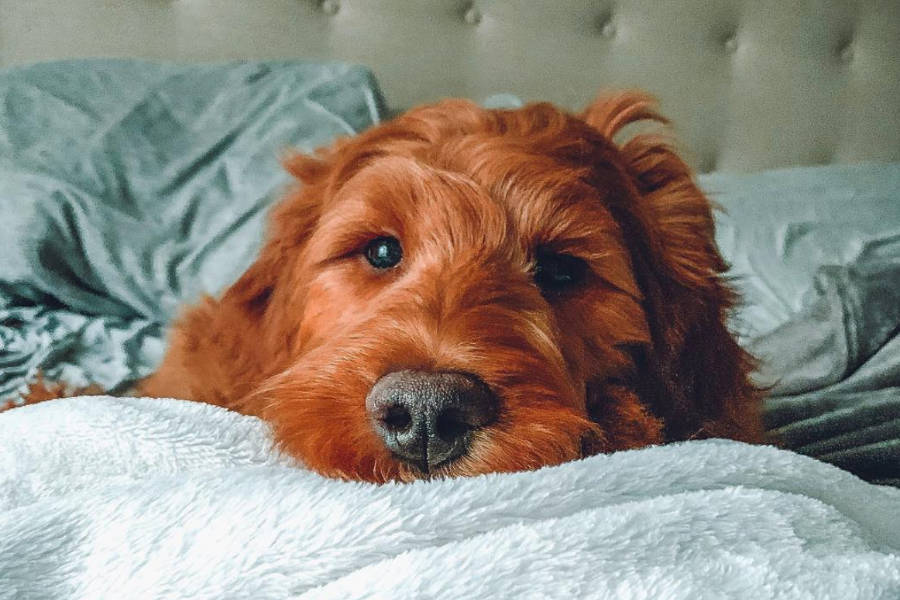 Irish Doodles are a hybrid dog that is the result of breeding between an Irish Setter and a Poodle.

These beautiful dogs are becoming increasingly popular due to their loving and patient personalities.

Irish Doodles are medium-sized dogs that love nothing more than to play a game of fetch with their owners.

They’re usually a low shedding dog that is sometimes even referred to as a potential hypoallergenic breed.

Irish Doodles can go by a variety of different names but they shouldn’t be confused for a Golden Doodle (cross between Golden Retriever and Poodle).

In this article we’ll take a close look at Irish Doodles to learn more about these wonderful designer dogs.

We’ll break down this article into the following sections:

What is Irish Doodle?

An Irish Doodle is a cross between an Irish Setter and a Poodle. These canines are often described as a designer dog like Goldendoodles, Sheepadoodles, Cava Poos, Yorkie Poos and more.

To get a better understanding of the Irish Doodle, we need to learn a little more about the two breeds that were used to create these energetic, friendly and loyal dogs.

Irish Setters are an evenly balanced breed that were traditionally used as gun dogs during hunting expeditions with their owners.

Their strong sense of smell proved invaluable in hunts for game birds, while they’re sleek build allowed them to streak across fields in pursuit of their targets.

While they served an important function in the fields of Ireland, Irish Setters are considered wonderful family dogs due to their affectionate and gentle personalities.

These graceful dogs love nothing more than a game of fetch with a tennis ball or a stick, providing hours of fun for both children and dogs.

They’re easily identifiable thanks to their “brilliant coat of mahogany or chestnut” that give them an elegant appearance.

Irish Setters have powerful rear legs that make them one of the quickest members of the gun dog variety.

Poodles are perhaps best known for their unique coats, which boasts their trademark tight curls.

They’re loved by those with an allergy to dogs because they’re considered one of the more hypoallergenic breeds.

Poodles don’t shed a lot compared to dogs with single or double coats that can shed throughout the year.

While they may look like elegant models that are primed for a doggy catwalk, don’t be fooled by their appearance.

Much like the Irish Setter, they were initially bred to hunt ducks in France and Germany. As you can imagine, Poodles are proficient swimmers.

Poodles are the second most intelligent dogs in the world behind the Border Collie. 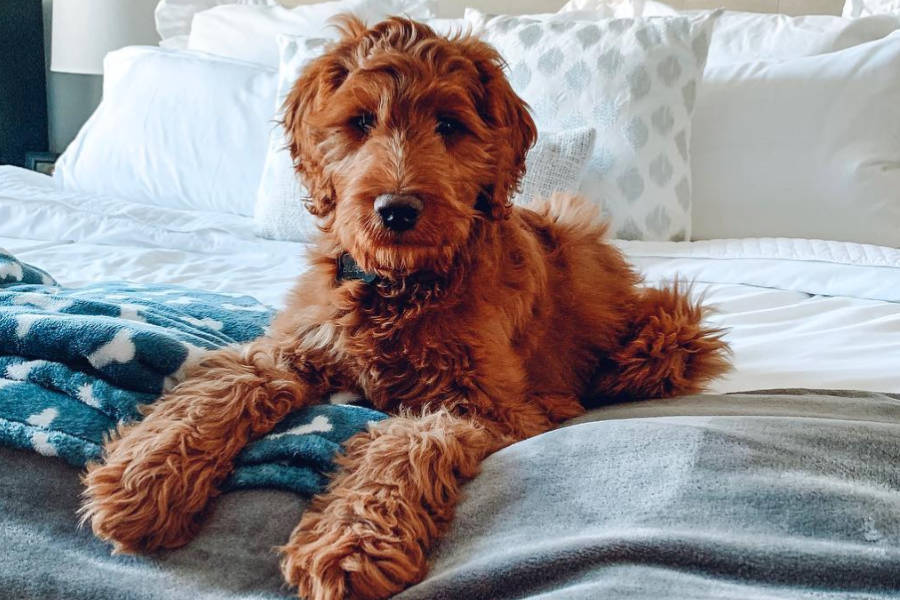 Irish Setters have a flashy red coat but Poodles can be found with black, white, or apricot hair.

The color of an Irish Doodle can vary upon the mother and father of each individual dog.

Irish Doodles pups will usually be either red, apricot, black, while some with have a splash of white.

How big do Irish doodles get?

An Irish Doodle is a cross between an Irish Setter and a Standard Poodle.

Given both breeds are medium-sized dogs, that’s what you can expect from an Irish Doodle.

Males will usually grow to a height ranging between 24 and 28 inches and can weigh between 50 and 70 pounds.

Females are slightly smaller at around 22 and 26 inches and can weigh between 40 and 60 pounds.

Irish Doodles are popular with families due to their loving and patient personalities.

They’re easy going and pleasant dogs that like to interact with people. They’re social dogs!

They’re friendly dogs that love to partake in play time with members of the family or other pets.

These docile dogs have a reputation for being patient with children, which makes them ideal for the family home.

However, you should never leave a dog alone with a small child.

Irish Doodles will require a moderate amount of energy to ensure these gorgeous dogs get enough mental and physical stimulation.

The AKC writes that an Irish Setter needs a lot of daily exercise, while the Poodle needs a moderate amount of exercise.

Depending on what traits your Irish Doodle picks up from each parent, they may need walks of varying frequencies.

Given the Poodle’s energy levels, you should at the very least expect a dog that needs around 30 to 60 minutes of exercise a day to stretch its legs.

Seeing as the Irish Setter and Poodle were both bred to hunt birds, you can expect your Irish Doodle to enjoy a game of fetch with a ball, toy or stick.

Irish Doodles can do well at agility training thanks to the active nature of both parents.

If you’re looking for a dog that doesn’t bark too much, Irish Doodles could be the breed for you.

They’re usually relatively quiet dogs that aren’t triggered as easily as some other types of canines.

Of course all pooches will bark a moderate amount but generally speaking, they won’t bark as much as other breeds.

Poodles are famously low shedding dogs that makes them a big hit with dog lovers who don’t want a trail of fur to be left behind their pups.

Irish Setters, on the other hand, are considered to be moderate shedders that require daily grooming.

So what about Irish Doodles? Well these designer dogs are described as low shedding dogs given the Poodle influence in their breeding.

However, you should still expect these friendly pooches to shed a little.

A question that is regularly asked of most dog breeds is whether they’re hypoallergenic.

The AKC make it clear on their website that there’s no such thing as a 100 per cent hypoallergenic dog.

But there are some breeds that are more hypoallergenic than most other dogs. The Poodle is one such breed.

Irish Doodles are considered low shedding dogs, which makes them a potential option for someone looking for a hypoallergenic pet.

However, we must stress that the level of shedding will depend on each individual Irish Doodle and whether their coats are more similar to their Irish Setter or Poodle parent.

While dog hair can be a big trigger for allergies, dander (microscopic pieces of dead skin) and salvia can be just as problematic as fur for those with an allergy to dogs.

When to groom Irish Doodle?

Irish Doodles can come with a variety of different coats: curly to wavy.

“Depending on how much brushing you want to do, you can keep your Irish Doodle in a longer or shorter coat.”

It’s recommended that you groom your Irish Doodle at least once every eight weeks to maintain the condition and good health of their coat.

Some Irish Doodles will like to body trim their pup, which means minimal brushing with be required between visits to the groomer.

Crosses, hybrids and mixes have a reputation for living longer lives than pure breeds.

Irish Doodles have an average lifespan of between 12 and 15 years, which is a great life expectancy for a medium-sized dog.’

They’re considered pretty health dogs – but they’re still susceptible to some conditions despite being a cross breed.

Irish Doodles can suffer from hip dysplasia, which is an abnormal formation of the hip socket that could potentially lead to lameness and arthritis of the joints.

Other general health issues could include bloat, blindness and deafness.

If you’re adopting an Irish Doodle, it’s good practice to enquire about potential health problems their parents may have experienced.

Irish Doodles can cost differing amounts depending on their coat color.

Red Irish Doodles tend to be the cheapest variety, starting at around $1400. Black and Apricot Irish Doodles can cost upwards of $1600.

Of course, the pricing of an Irish Doodle can vary from breeder to breeder, depending on color and size. 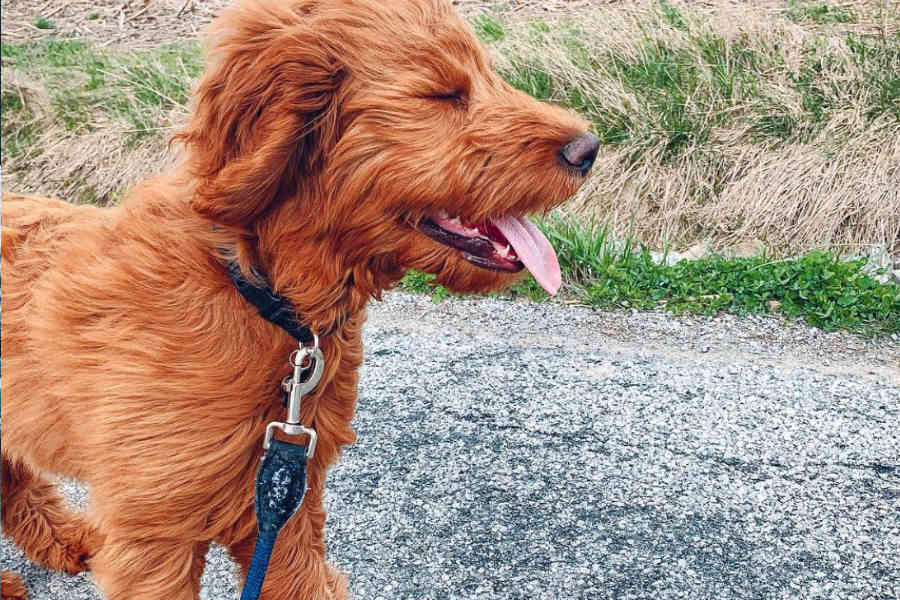 Irish Doodles can sometimes be confused for Goldendoodles. There are two different types of designer dogs.

Irish Doodles are a cross between an Irish Setter and a Poodles, while Goldendoodles are a mix between a Golden Retrievers and Poodles.

Goldendoodles tend to be bigger than Irish Doodles, while the latter’s coat requires less grooming.

What is a mini Irish Doodle?

They’re a smaller package but Mini Irish Doodles will put a larger hole in your pocket. They cost around $500 more than an Irish Doodle.

Mini Irish Doodles are often used as emotional support or therapy dogs due to their small size and living nature.

If you’re thinking about an Irish Doodle as a pet, you may want to find some members of the designer breed on social media.

There are over 16,000 submissions for #irishdoodlesofinstagram on the photo-sharing app.

While you can check out their photos, you can also send them a direct message to learn more about the breed from people who already own these dogs.

If you see F1 before an Irish Doodle, it means the dog is a first generation cross between an Irish Setter and a Poodle.

Some F1 Irish Doodles have been bred using an Irish Doodle and a Poodle. Therefore their genetic make up is 75% Poodle and 25% Irish Setter. These dogs are called f1b Irishdoodle.

In theory, these should be even more hypoallergenic than F1 Irish Doodles because there is a stronger Poodle influence in their genetic make up.

The cycle continues with breeding between two F1 Irish Doodles creating a F2 puppy, while breeding an F1 with an F1B results in a F2B.

If you’re looking for a dog breed that is friendly and outgoing, but obedient and patient, the Irish Doodle could be the breed for you.

These dogs are loving pets that saviour time spent with the dog owners, whether’s going for walks or simply playing fetch in the garden.

Irish Doodles are considered to be low shedding dogs, while some members of this breed are considered suitable for those looking for a hypoallergenic dog if they take after their Poodle parent.

However, these designer dogs don’t come cheap and depending on their color, you can expect to pay between $1400 plus for an Irish Doodle. Mini Irish Doodles cost even more!