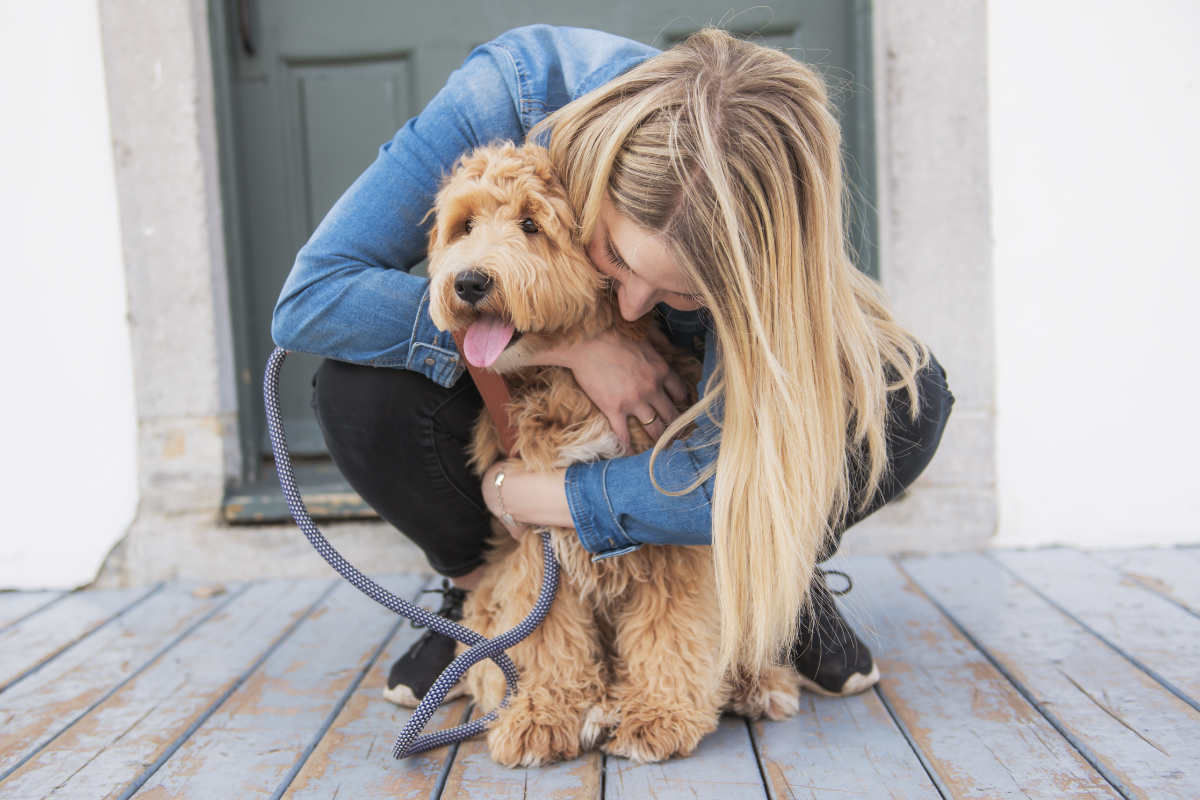 Irish Doodles are a cross breed between an Irish Setter and a Poodle.

They’re a hybrid breed that were first bred to be service and therapy animals for those with an allergy to dogs.

Irish Doodles are a medium sized dog that can range from 22 inches to 28 inches in height and 40 and 70 pounds in weight.

The cross breed usually come in red, apricot, black and can patches of white on their coat.

These fluffy dogs have an average lifespan of 12 to 15 years, meaning these designer dogs will be your faithful companions for quite some time.

Irish Doodles are susceptible to a number of potential health problems that owners will need to keep an eye on, such as hip dysplasia and bloat.

Given the array of Doodle varieties available, it can be overwhelming experience deciding which hybrid beed is the right fit for you.

In this article, we’ll take a look at the pros and cons of Irish Doodles. 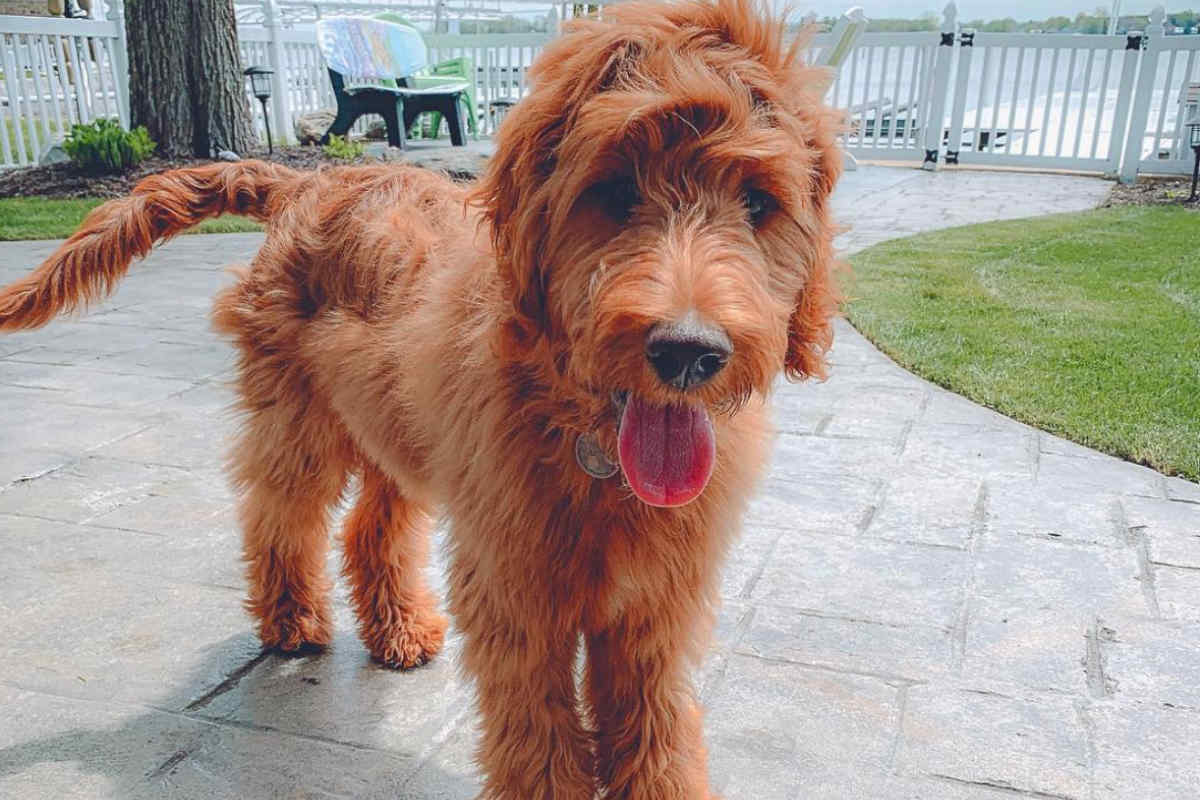 Irish Doodles are intelligent dogs that are usually quite easy to train. Poodles are the second most intelligent dog in the world behind the Border Collie. They’re usually quick to learn new commands and pick up basic obedience training. The idea behind creating the Doodle cross breeds is to create dogs that encompass the best traits of each individual breed. The Poodle is associated with bringing the IQ to the Irish Doodle package.

Bubba, for instance, was quick to master potty training.

Irish Doodles are very smart. Bubba came home at nine weeks old and within the first week at home he had almost mastered potty training; the only reason he would have an accident is when he was sitting at the door and we didn’t know it until it was too late. We then introduced a bell at the door and we showed him how to use it once and ever since he will sit and ring it until you let him out. He also learned how to sit etc in a day. He loves attention, but he is perfectly fine just playing with his toys by himself for hours.

The influence of the Poodle in these designer dogs can been seen once again when we take a look at the shedding patterns of the Irish Doodle. Generally, Irish Doodles are considered low shedding dogs. Poodles are notorious for their curly coats that don’t really shed at all. Irish Setters, on the other hand, have a coat that sheds at a moderate rate. If an Irish Doodle takes after their Poodle parent, you can expect a low shedding pup. Some Irish Doodles are bred used a first generation Irish Doodle and a Poodle, which results in a designer dog that is comprised of 75% Poodle. By doing this, it enhances the chances of a dog that doesn’t shed.

Here’s what Guinness’ parents had to say about Irish Doodle shedding.

Irish Doodles are not a heavy shedders but if their fur gets long they do tend to shed moderately. This is because of the Irish Setter in them, as Irish Setters tend to have long fur and moderate shedding. However, you can easily prevent this by periodically brushing their fur. 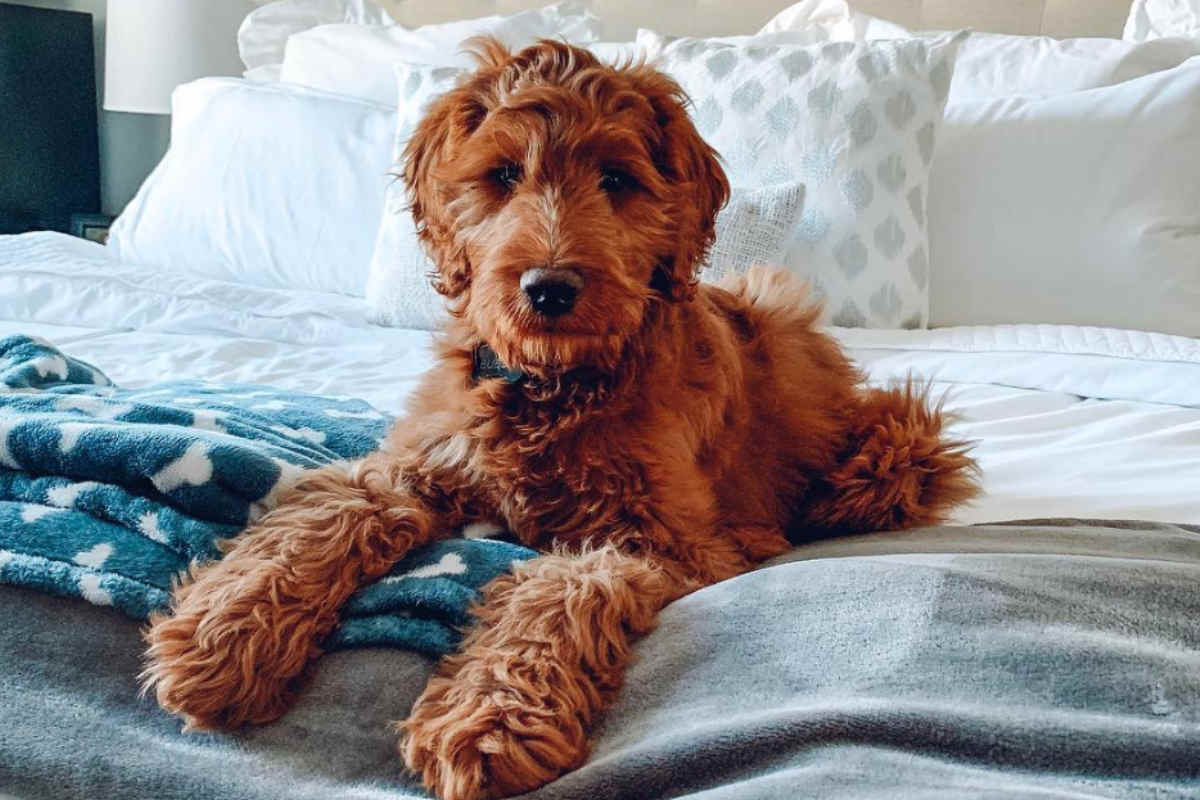 As we mentioned above, Irish Doodles like Goldendoodles were initially bred to work as service and therapy dog for those with an allergy to dogs. While the American Kennel Club make it clear that there’s no such thing as a 100 per cent hypoallergenic dog, the organisation do recommend Poodles as a good choice for those looking for a dog that won’t trigger their allergies. So Irish Doodles were bred with the specific purpose of being hypoallergenic.

Bubba is a hypoallergenic Irish Doodle, according to his parents.

A dog that is hypoallergenic was a huge thing to us when deciding on what type of dog to get. We are both clean freaks and it is super nice not having hair EVERYWHERE and a dog that stays clean easily.

Irish Setters are regarded as great family pets. They’re affectionate, kind, patient and playful, which are all traits that are used to describe Irish Doodles – too. They adapt to family life well. Irish Doodles have earned a reputation for being great around children, displaying a youthful enthusiasm but patience when required. However, we never advise dog owners to leave to canines alone with children unsupervised. 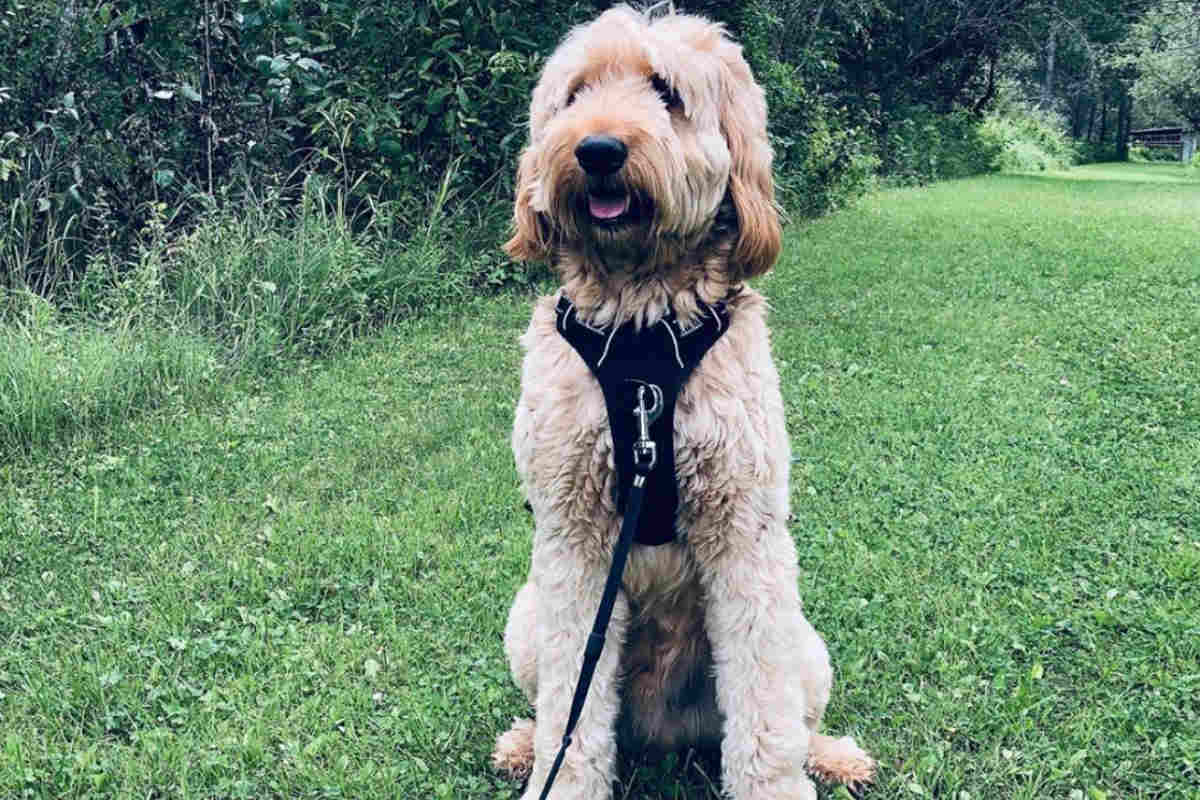 If you’ve got a house that has a lot of visitors, whether it be family or friends, you’ll want a dog that isn’t afraid to meet new people or won’t act overly protective of the family home. The Irish Doodle is a sociable breed that like to interact with strangers. Alternatively, you may want a dog that is able to adapt to different situations: whether it’s the workplace, your local cafe or a dog-friendly pub. Irish Doodles like to be around people so your social life won’t take a hit with these dogs if you decide to bring them on your daily adventures.

Guinness’ owners did have some advice on socialization.

The cons of Irish Doodles are that if they aren’t consistently socialized with other dogs and people they will tend to bark at them as they get exited as it is something they are not used to. 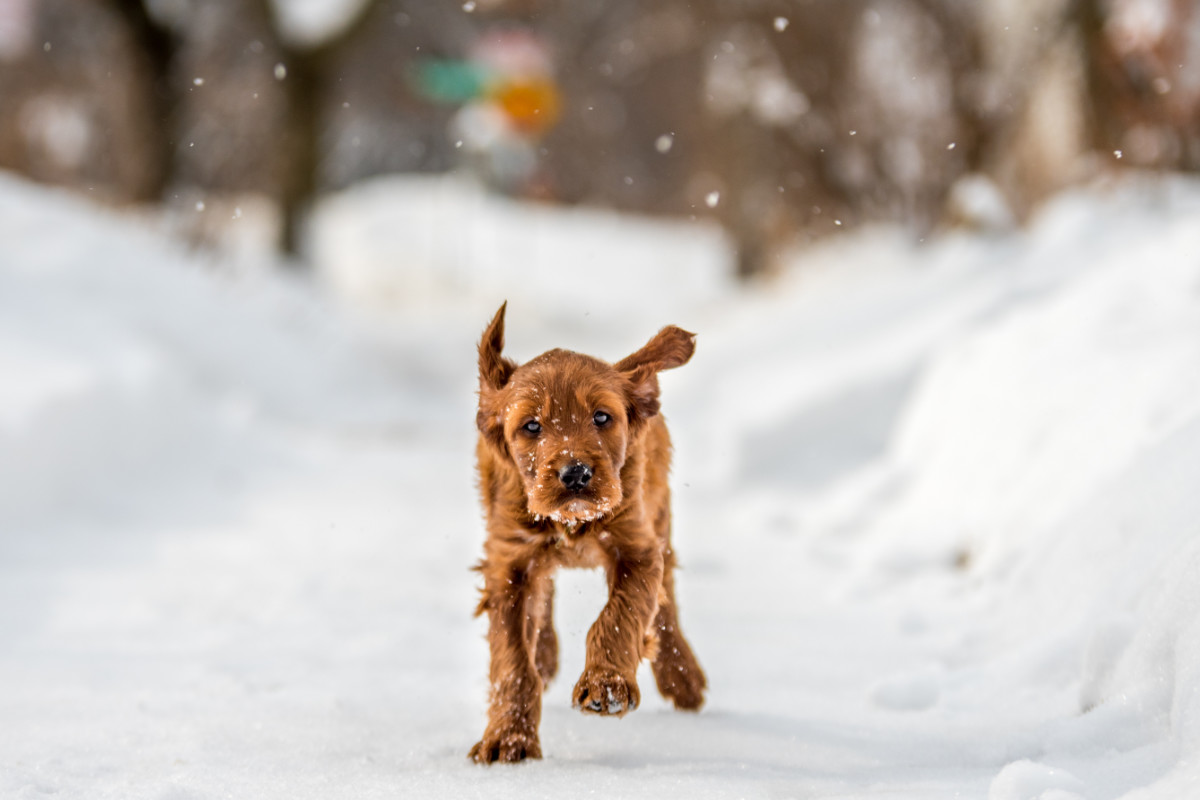 While Irish Doodles are considered a hypoallergenic dog, it’s not always the case. Given first generation Irish Doodles are made up of 50 per cent Irish Setters, there’s a chance that these dogs could be moderate setters rather than low shedding dogs like the Poodle. As with all Doodles and cross breeds, there can be no guarantee that a puppy will possess certain desired traits of their parents. Breeders should have a good idea whether an Irish Doodle is more like their Irish Setter or Poodle parent but it won’t become clear until the puppy is older. 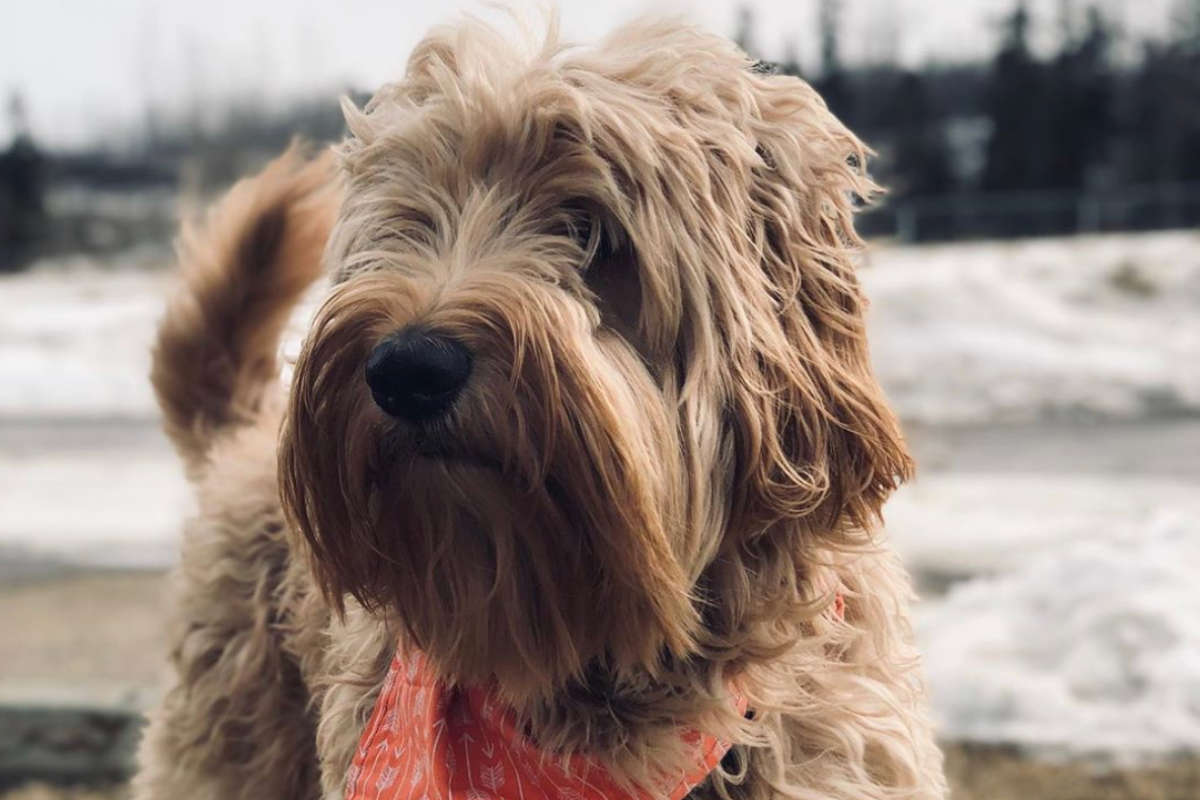 Irish Doodles will require quite a bit of daily exercise. The Irish Setter is a high energy dog, which is hardly a surprise given they were initially bred to hunt game birds. While the Poodles don’t have a reputation for having quite as high energy levels as the Irish Setter, they still need a moderate amount of exercise. An Irish Doodle should enjoy a game of fetch with a tennis ball or a dog toy given both their parents were used to retrieve birds.

Guinness gets regular exercise, whether it’s a long walk or a light run.

Irish Doodles need a moderate amount of exercise as they can get bored if left inside for too long. They love to go on runs and long walks so we would recommend around an hour a day. They are also very social so you can take them to exercise and play with friends by sending them to daycare a few days a week, or by going to a local dog park. 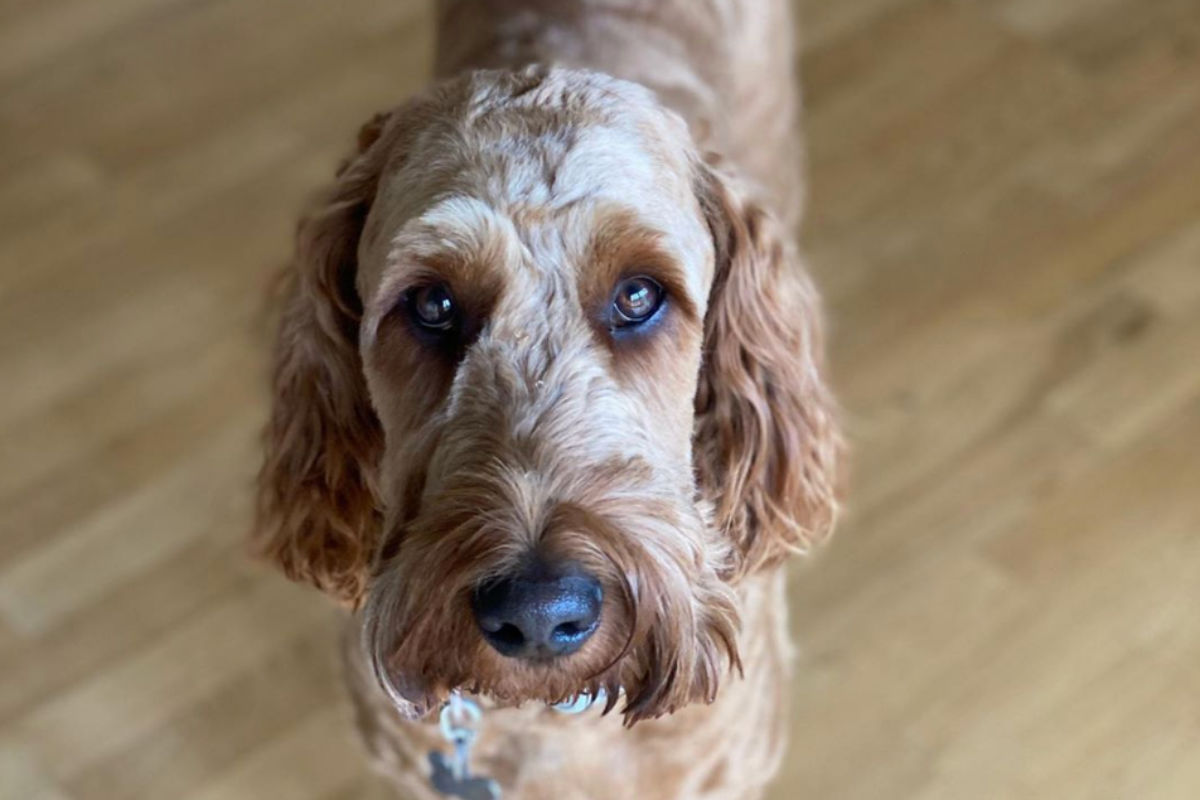 Separation anxiety is a condition that affects dogs when they’re left at home alone. Symptoms include excessive barking, crying or howling, destructive chewing and digging, and in some extreme cases, a dog could defecate inside the home. If your dog is crated, they could resort to non stop scratching at the cage or drag items of clothing or furniture into the cage and chew it into small pieces. Irish Doodles can suffer from separation anxiety. Irish Setters, in particular, can experience some separation anxiety given these dogs can become quickly attached to their owners. Poodles are more susceptible to boredom when left alone rather than separation anxiety. If you have to leave your Irish Doodle alone more than three hours a day, they make not be the right dogs for you.

Could be difficult to train

Irish Doodles can be difficult to train if they take after their Irish Setter parent. These gorgeous red dogs can suffer from boredom or become easily distracted during training sessions. Irish Setters are the 53rd most intelligent dogs in the world, which means they usually take 15-25 repetitions to learn a new command, while they will obey the first command 70% of the time. This is in sharp contract to Poodles, who rank second. If your Irish Doodle inherits some of the traits of the Irish Setter, they could prove challenging to train.

You won’t be surprised to learn that Irish Doodles are expensive dogs. You should expect to pay around $1,400 to $1,600 on a red Irish Doodle. Other colors are more expensive than the traditional red variety. If you’re interested in a Mini Irish Doodle, you’ll probably have to delve a little deeper into your pockets as they can cost at least $600 more than regular sized Irish Doodles. 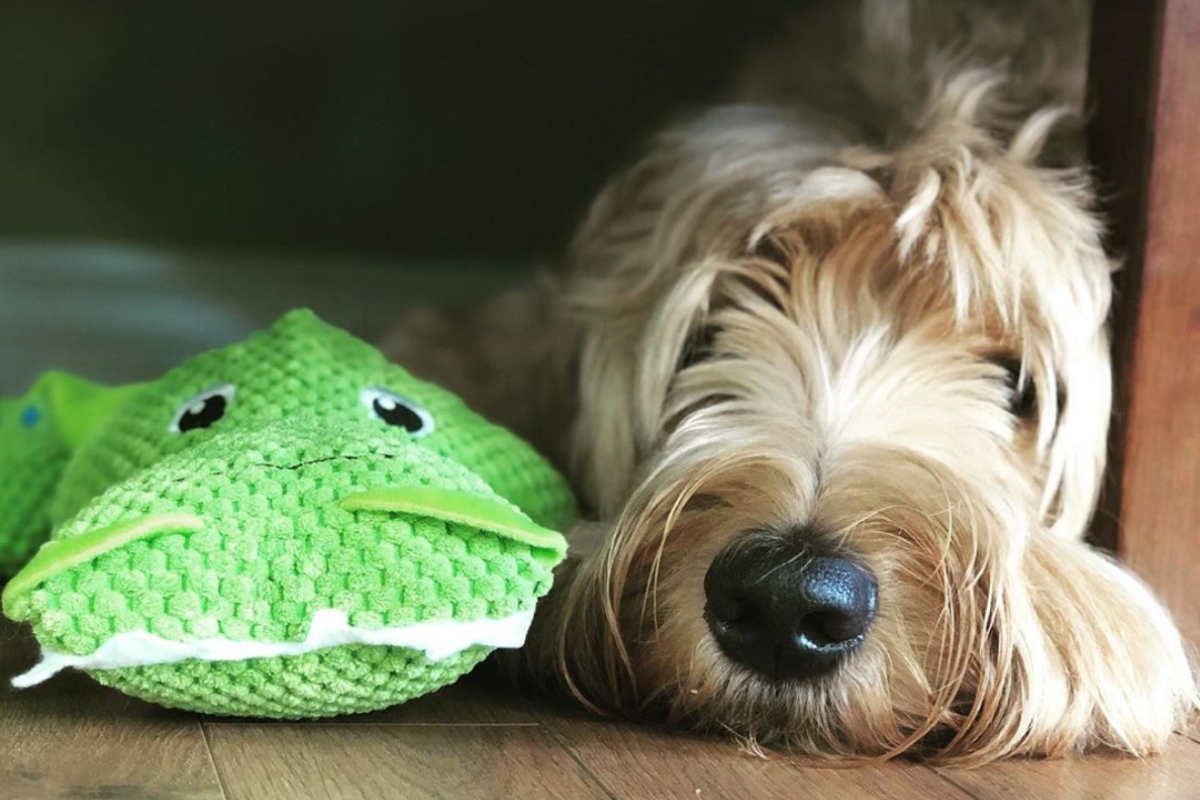 If you’re thinking about an Irish Doodle as a potential pet, you should research an ethical and reputable breeder.

They’ll usually require potential dog owners to fill out exhaustive questionnaires to make sure you’re a good fit for the pup.

You should ask to see the puppy with its mother to ensure the little fur ball was indeed bred by the breeder in question. 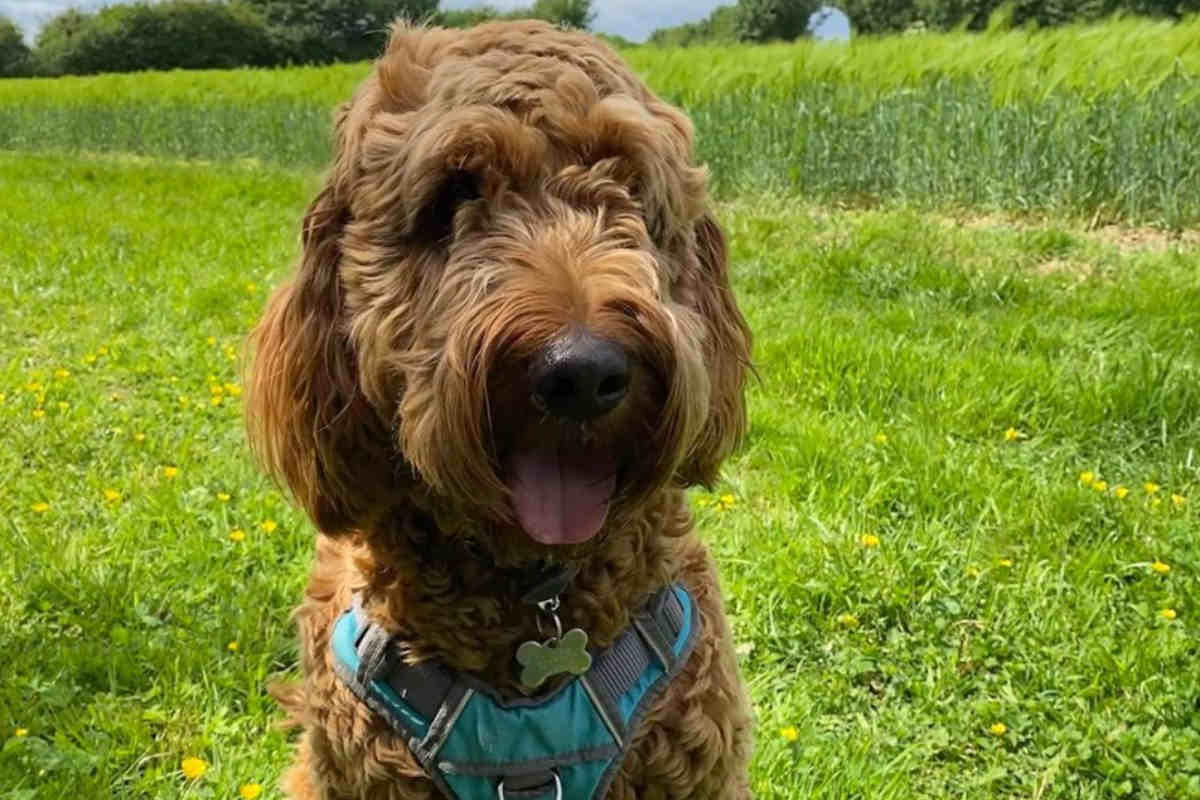 Irish Doodles can make great family pets due to their dutiful, loving, outgoing and sociable personalities.

These hybrid dogs are usually low shedding dogs compared to most other breeds.

Indeed, some are even described as hypoallergenic, which makes sense given they were initially created to work as service or therapy animals for people with an allergy to dogs.