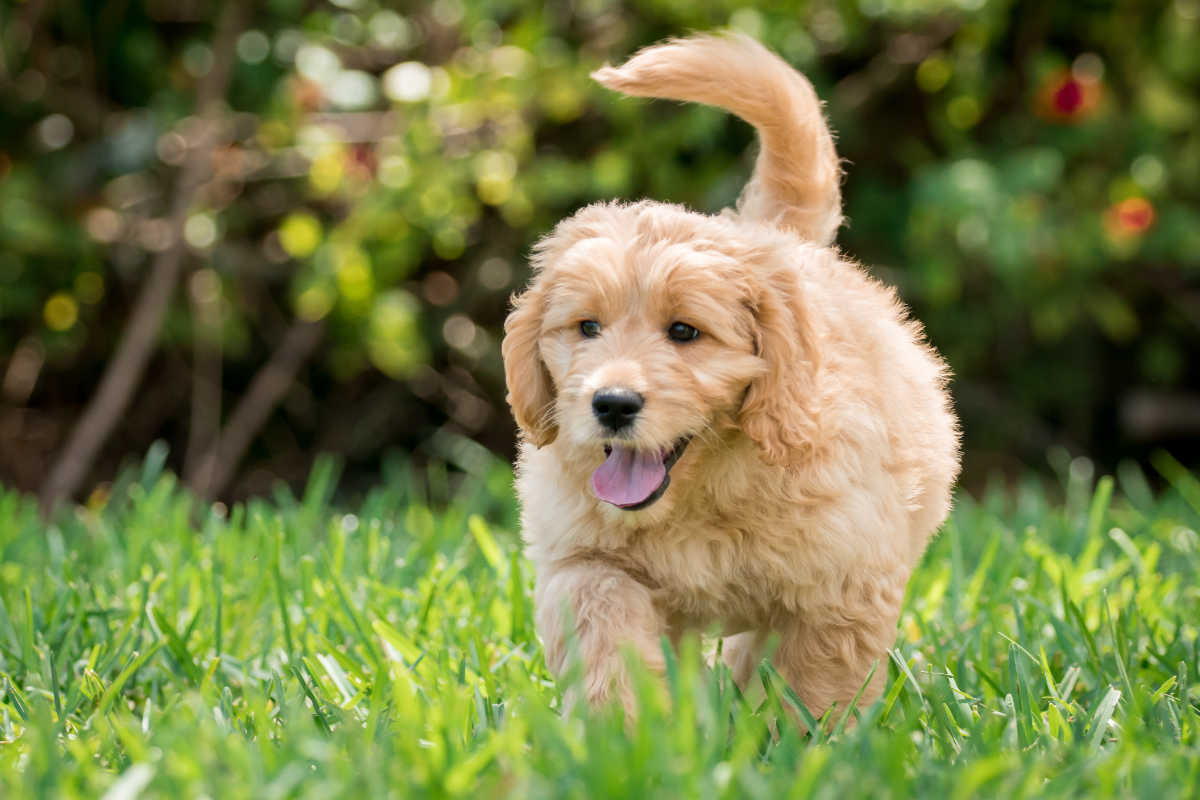 Goldendoodles are one of the world’s most popular hybrid dogs.

They’re a cross between two popular dog breeds to create an active, intelligent and family-friendly canine.

Goldendoodles are the result of breeding between the Golden Retriever and the Poodle to create a designer dog with a playful personality.

These dogs are thought to have originated in the early 1990s following the success of the Labradoodle.

In this article, we’re going to take a closer look at Goldendoodles and their coat color.

So with the introduction complete, let’s take first look at the history of the Goldendoodle.

What Is A Goldendoodle? 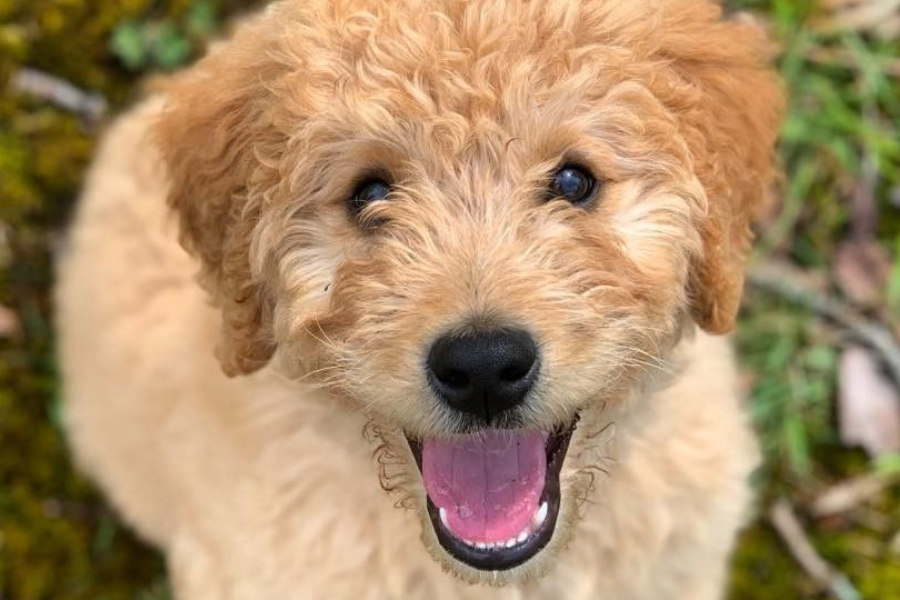 As we mentioned above, Goldendoodles are a cross between a Golden Retriever and a Poodle. They’re an extremely popular hybrid dog thanks their loving personalities, supreme intelligence, hypoallergenic coats and energetic nature.

But what is the history of the Goldendoodle? Let’s take a look.

Goldendoodles are first thought to have been bred in 1969 as breeders looked to create a versatile guide dog.

Golden Retrievers and Labradors often serve a function as guide dogs but neither have a hypoallergenic coat. However, Goldendoodles have hypoallergenic qualities thanks to the influence of the Poodle’s genes, providing an alternative for people with allergies but requires assistance from a guide dog.

The Goldendoodle hybrid is thought to have been inspired by the success of the Labradoodles, which was one of the first cross breeds. Goldendoodles became increasingly popular in the 1990s before emerging as one of the world’s most popular designer dogs in the 21st century.

Wikipedia explains that Goldendoodles can come in multiple generations and it depends on what generation is bred with what. Some generations will show different looks as some are curlier than others.

While you’ve probably heard of the Goldendoodle cross breed, they can go by a number of other names – too. These include Groodle, Curly Golden, Curly Retriever, Goldenoodle and Goldenpoo.

The American Kennel Club hasn’t granted the Goldendoodle status, although the Golden Retriever and the Poodle are well-established breeds within the organization.

We’ve already touched upon the fact that the Goldendoodle is not recognised by the American Kennel Club.

While their parents – the Golden Retriever and the Poodle – have breed standards outlined by the AKC, there is no breed standard for the Goldendoodle on the organization’s website.

However, the Goldendoodle Assocation of North America provides a breed standard that their breeders are trying to achieve when they breed these hybrid dogs. Let’s take a look at what the breed standard has to say about appearance.

The breed was developed by crossing Poodles and the Golden Retriever, and therefore the physical appearance of this breed is a balanced mix of the traits common to those two founding breeds, which are the only two breeds that comprise the Goldendoodle.

Coming in three different sizes – standard, mini and petite mini, Goldendoodles can have a coat that is curly, wavy or straight. The Goldendoodle’s coat has hypoallergenic qualities with low shedding qualities. They’ll usually have broad skulls, long muzzles and oval-shaped eyes with a black or brown nose.

Now that we know a bit more about Goldendoodle appearance, let’s take a look at the range of Goldendoodle coat colors.

Let’s start off with the Cream Goldendoodle and Apricot Goldendoodle – they have coat colors that you’d associate with the Golden Retriever breed. 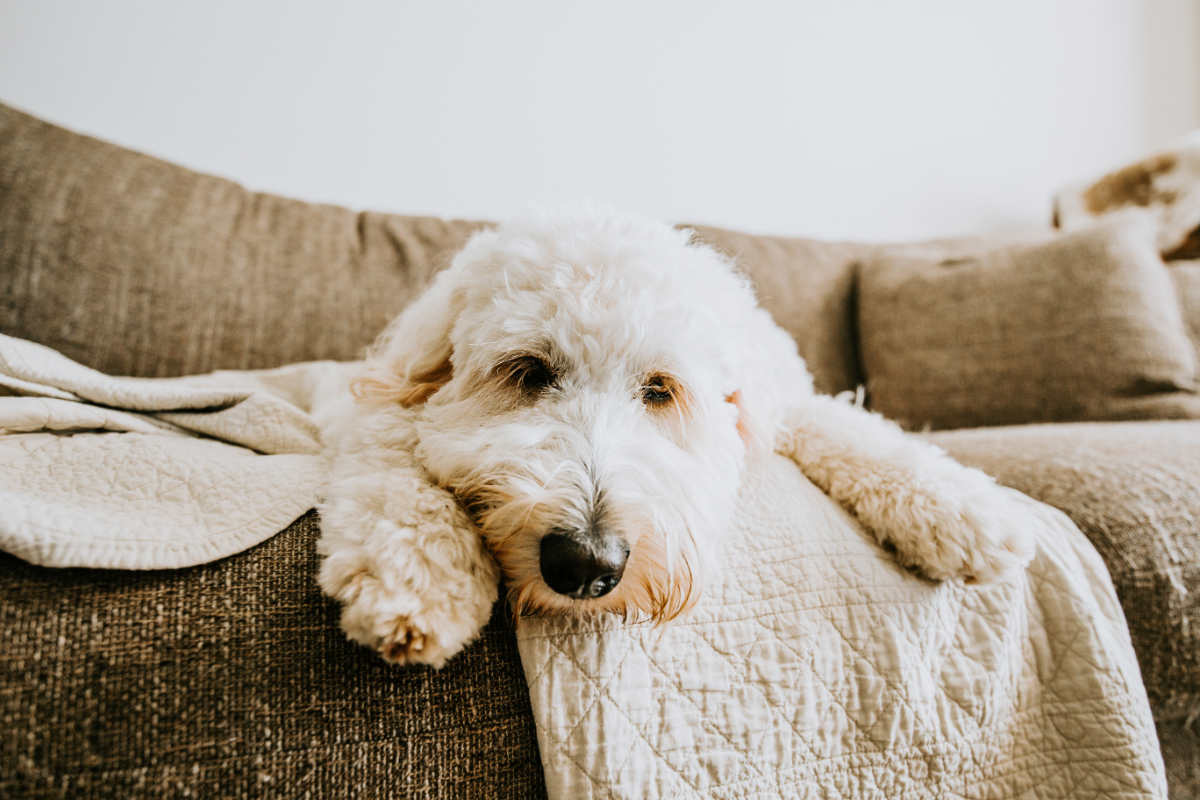 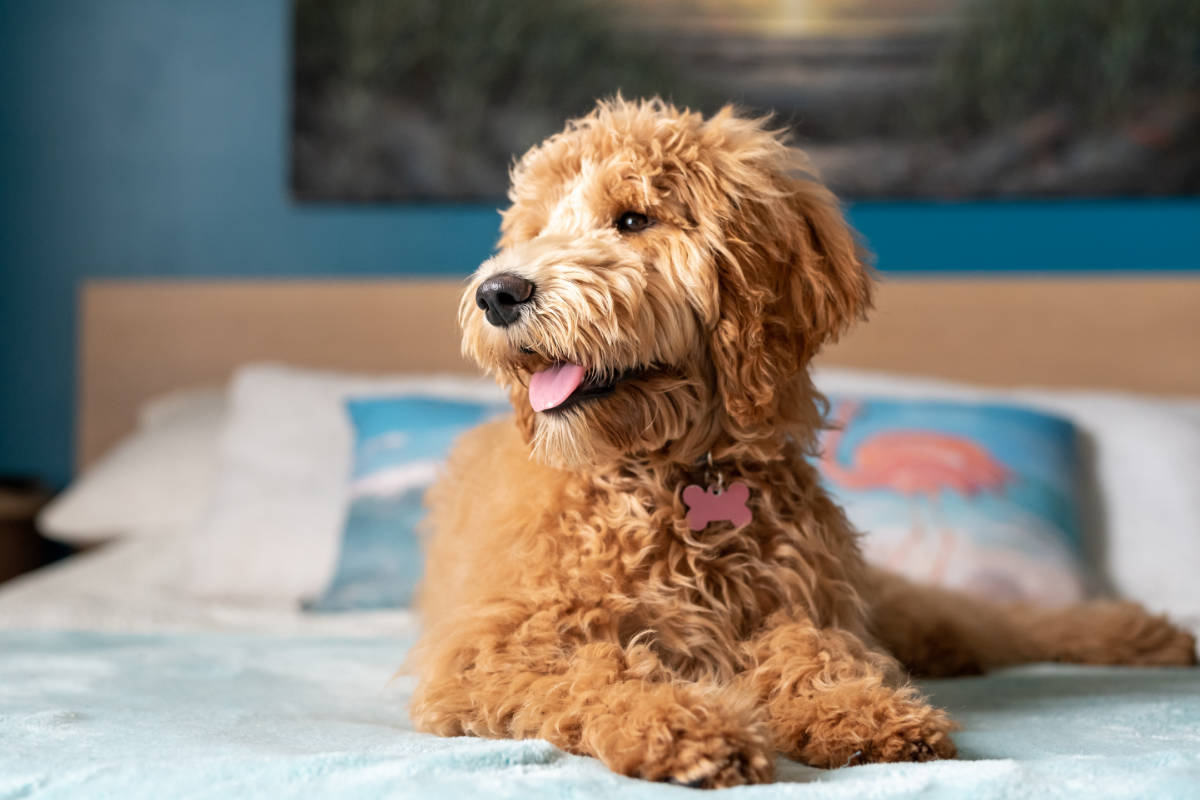 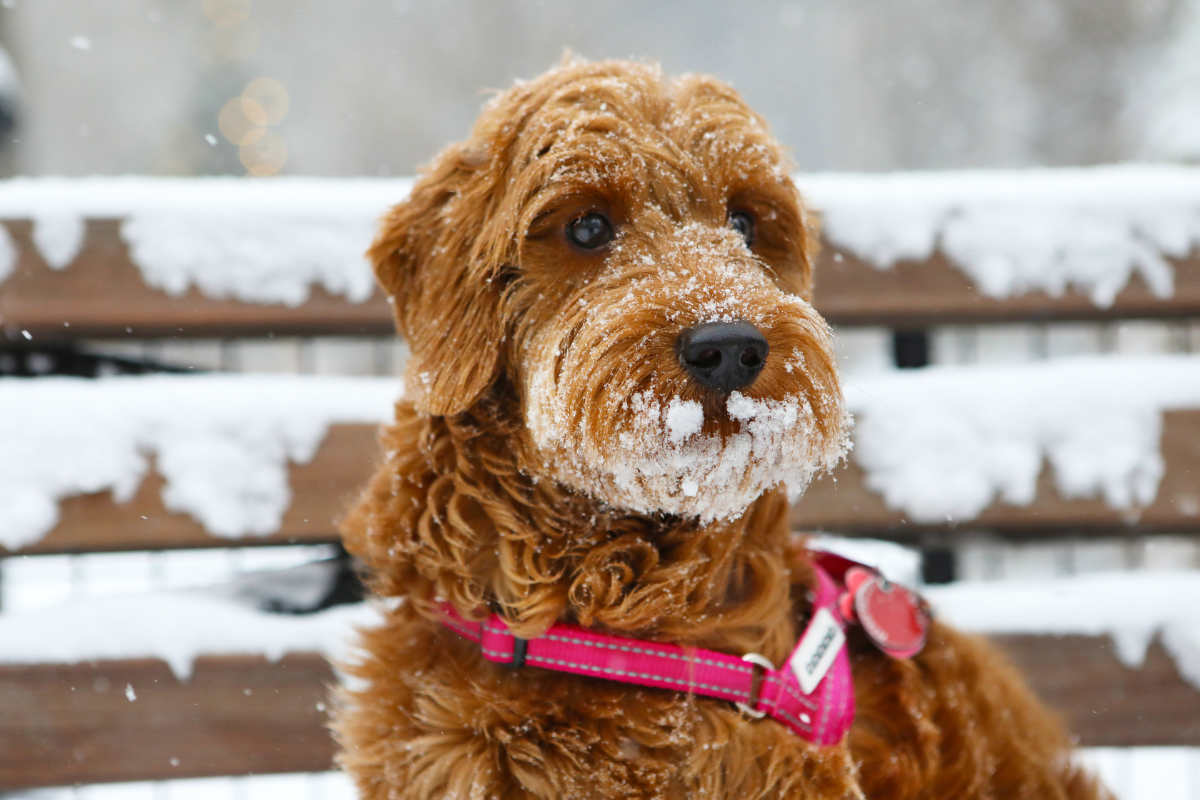 There are also some Goldendoodles with a brown coat that is typically the result of dominant genes of the Poodle. 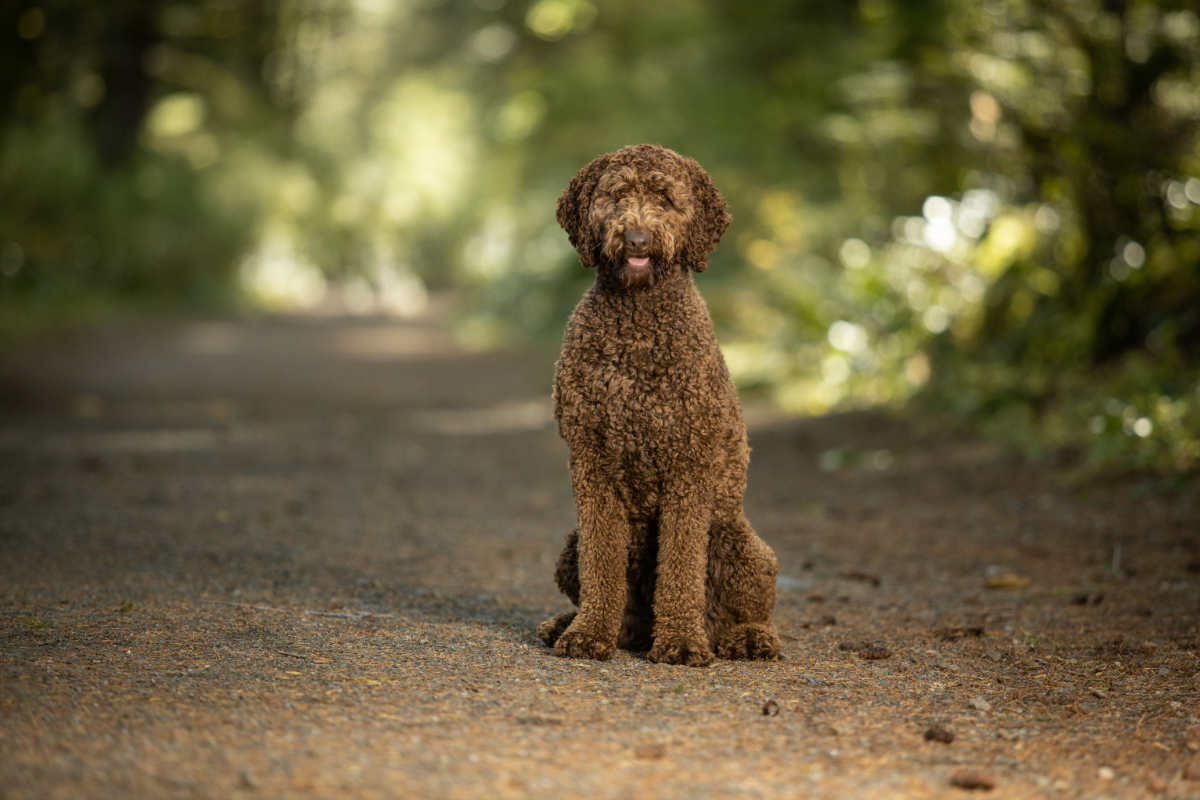 Despite being called Goldendoodles, you can also find Black Goldendoodle if both the Golden Retriever and the Poodle carry the recessive gene.

While we’ve touched upon some of the main coat colors of the Goldendoodle cross breed, there are also some different coat patterns that combine two or three different shades to result in a striking coat.

The Tan Goldendoodle is a pretty common coat color, resulting from the breeding of Apricot and Cream Goldendoodles.

There is the Black and White Goldendoodle that usually have splashes of white on their face, chest and paws. These unique markings often lead to the coat pattern being described as a Tuxedo Goldendoodle. 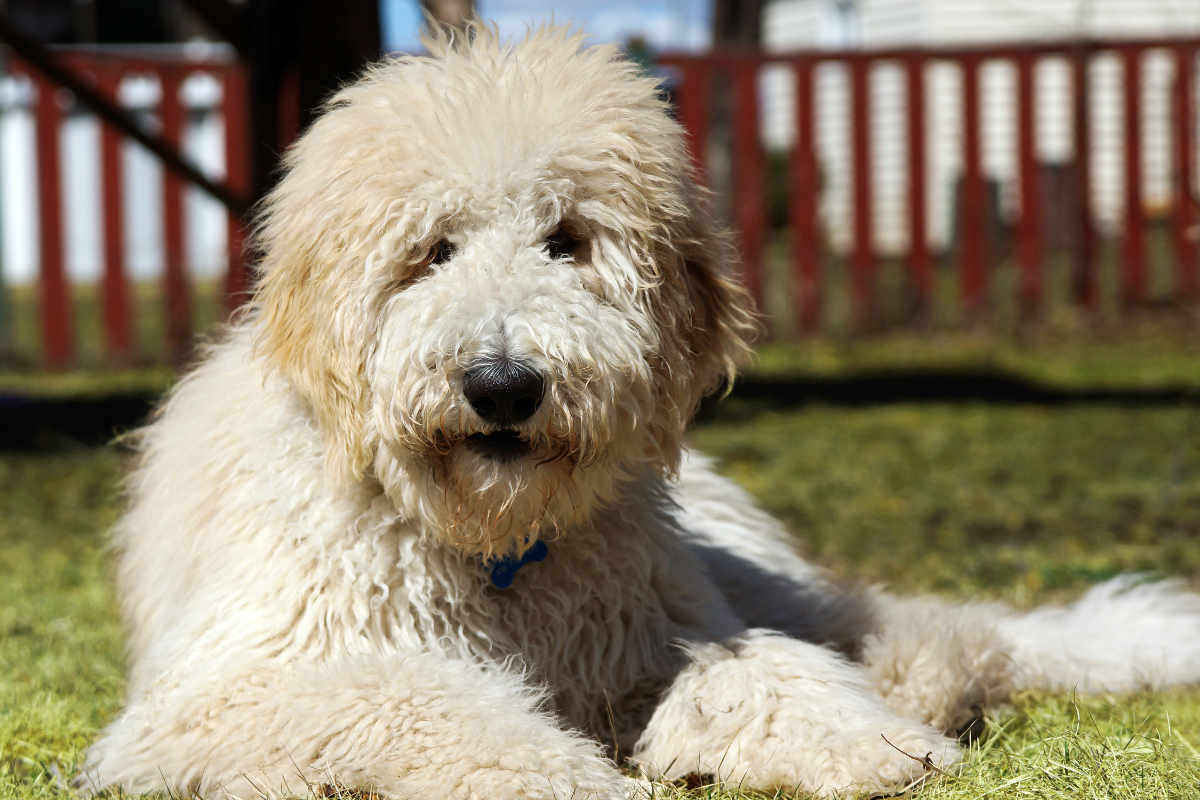 The Phantom coat pattern is common in some other breeds and you can find some Goldendoodles with this colorful coat. They’ll usually have a predominantly black coat, with red around their eyes, muzzle, chest and paws with a splash of white on their chest. Of course, these colors could vary.

Next up is the Grey Goldendoodle who usually started with a dark coat color that has turned grey over time.

You’ll probably be familiar with the term Merle if you’re a dog enthusiast. The Merle Goldendoodle is extremely rare and often a controversial variety of Goldendoodle. 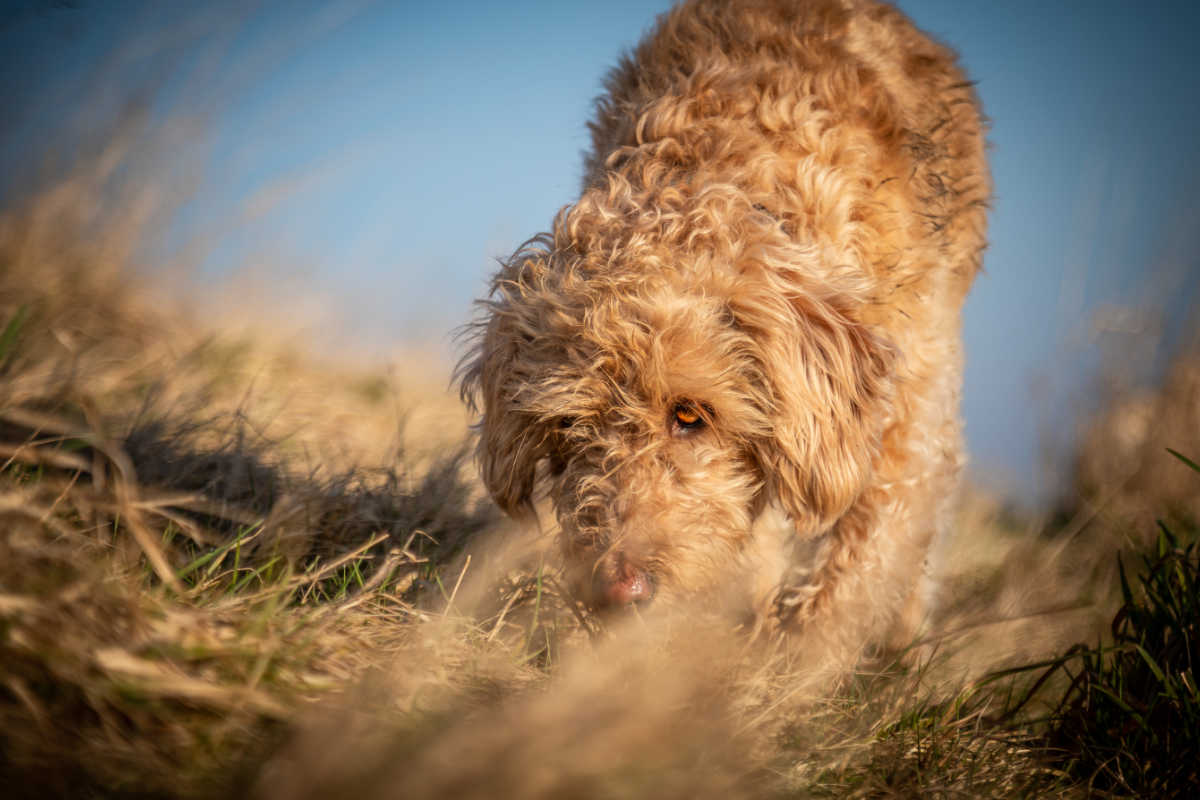 There is no guarantee where Goldendoodles and coat color is concerned. Seeing as the cross breed is a mix between two different breeds, there’s no guarantee that a Goldendoodle will have certain desired traits.

Having said that, if breeders opt to breed multigenerational Goldendoodle with a Poodle there’s a chance they’ll have even curlier coat with more hypoallergenic qualities.

While Goldendoodle puppies may be born with a specific coat color, it could change over time. 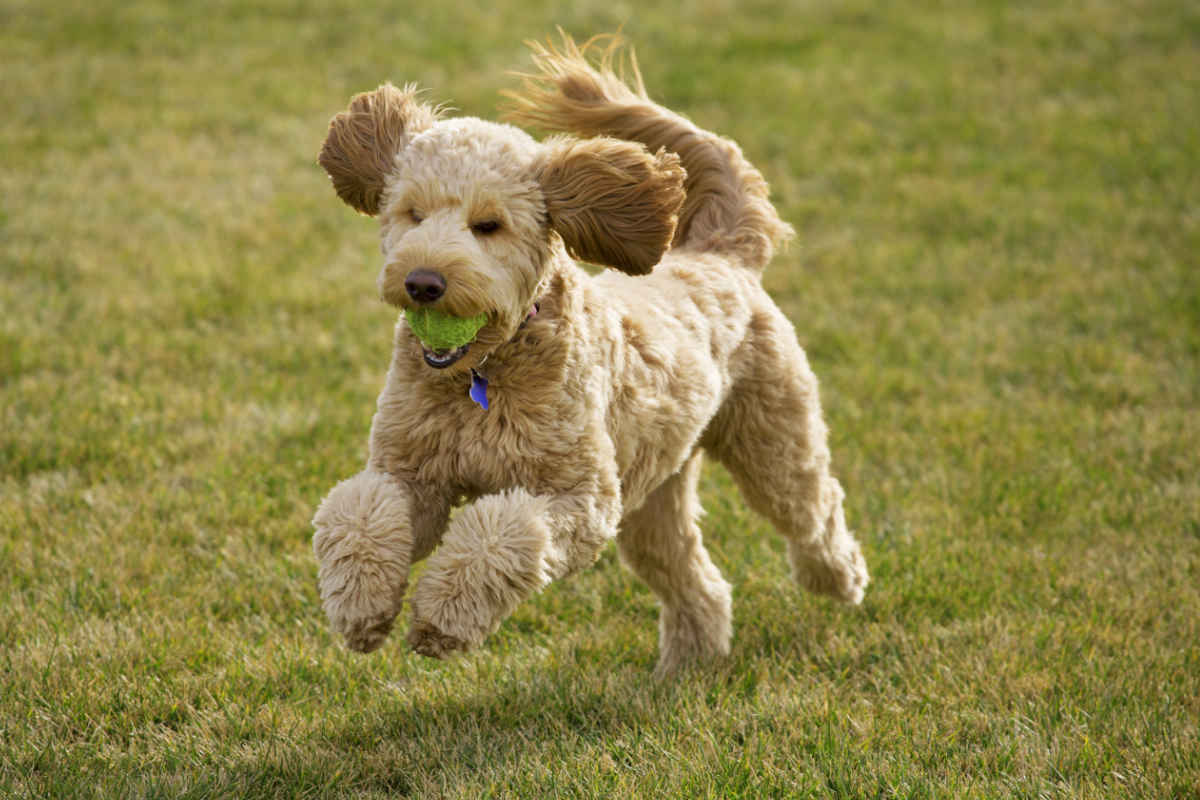 We’ve reached the end of our article on Goldendoodle coat color.

As you’ll know, there are some common coat colors such as Cream, Apricot, Red, Brown and Black.