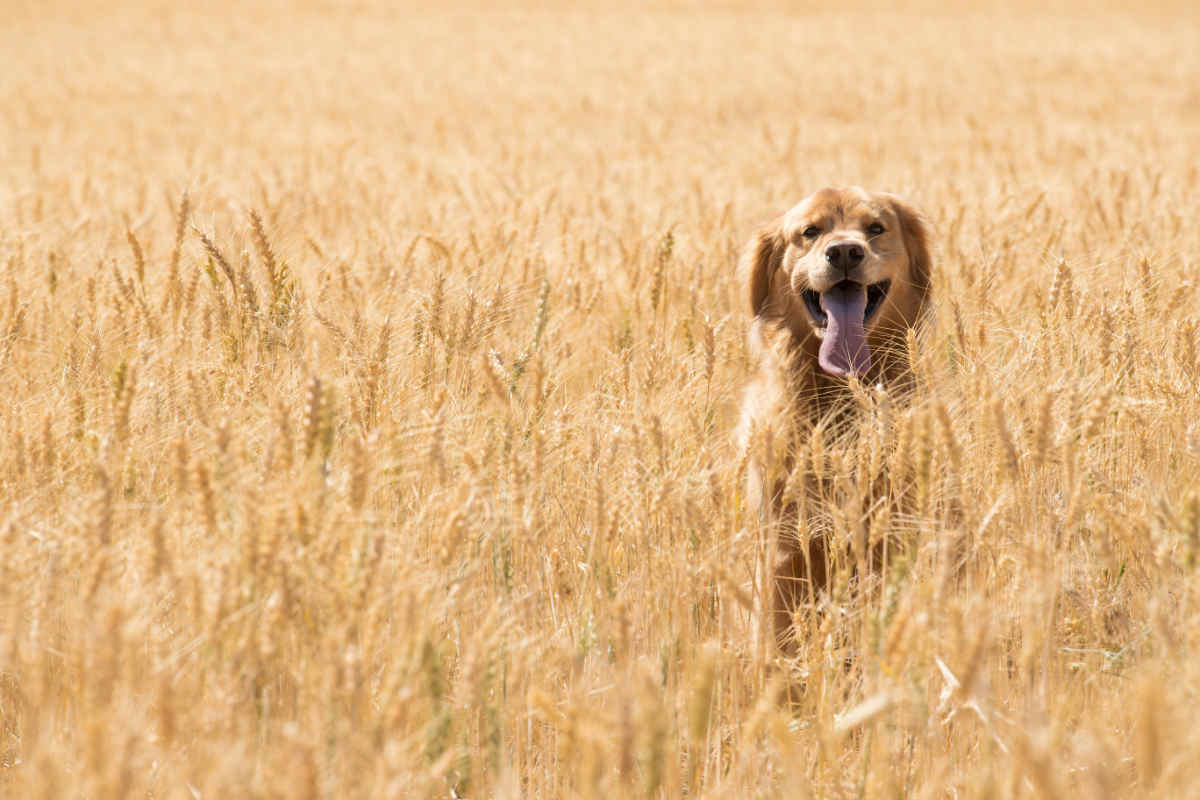 The Golden Retriever and the Siberian Husky are two of the world’s most popular dog breeds.

There’s a good chance that you’ve previously encountered one of these breed or perhaps both in your day-to-day life.

But have you heard of the Goberian?

The Goberian is a cross between a Golden Retriever and a Siberian Husky to create a family-orientated, medium-sized dog.

In this article, we’re going to take a look at all three types of dog in this comparison article to give you a clear idea of each breed/mix.

This feature will closely examine the areas of size, appearance, temperament, exercise, training and shedding.

What Is A Golden Retriever? 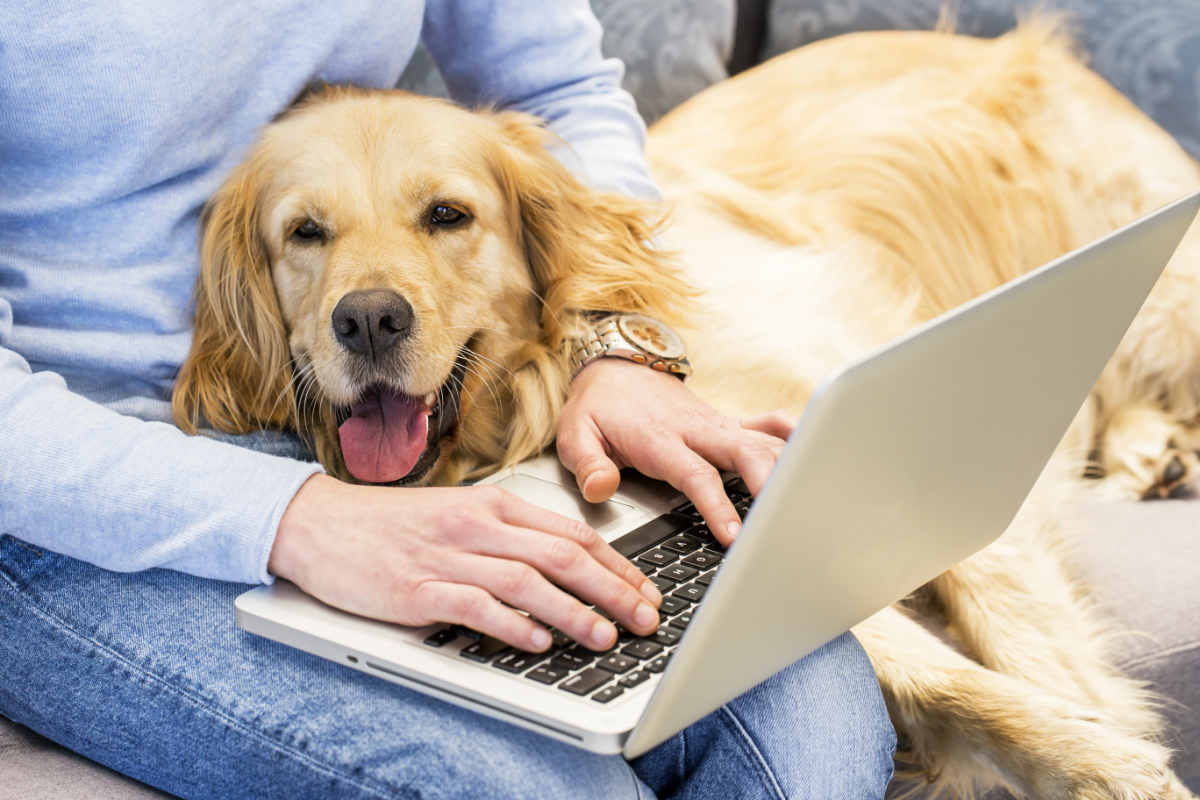 The Golden Retriever is perhaps one of the best-known and most-loved dog breeds in the world thanks to their beautiful appearance and loving personalities.

Hailing from Scotland, Golden Retrievers are thought to have originated in the 1830s before the breed was gradually developed into the elegant dogs that we know and love today.

The Golden Retriever was first recognised by the American Kennel Club in 1925 and they’re ranked as America’s third-most popular dog in the USA as of 2021.

They can serve a number of functions in society, ranging from family pets, gun dogs, guide dogs, field trials and obedience.

Siberian Huskies might not be as universally popular as the Golden Retriever, they’re still ranked at number 19 in the AKC’s list of most popular dog breeds.

These charismatic dogs were traditionally used by the Chukchi people of northeastern Asia as an endurance sled dog to pull moderate loads across snow and icy conditions.

Siberian Huskies arrived in Alaska in 1910 and continued to gain notoriety thanks to the serum runs in 1925. They were recognised by the AKC in 1930.

While they’re still used as sled dogs in some parts of the world, Siberian Huskies are much-loved family pets in homes around the world. 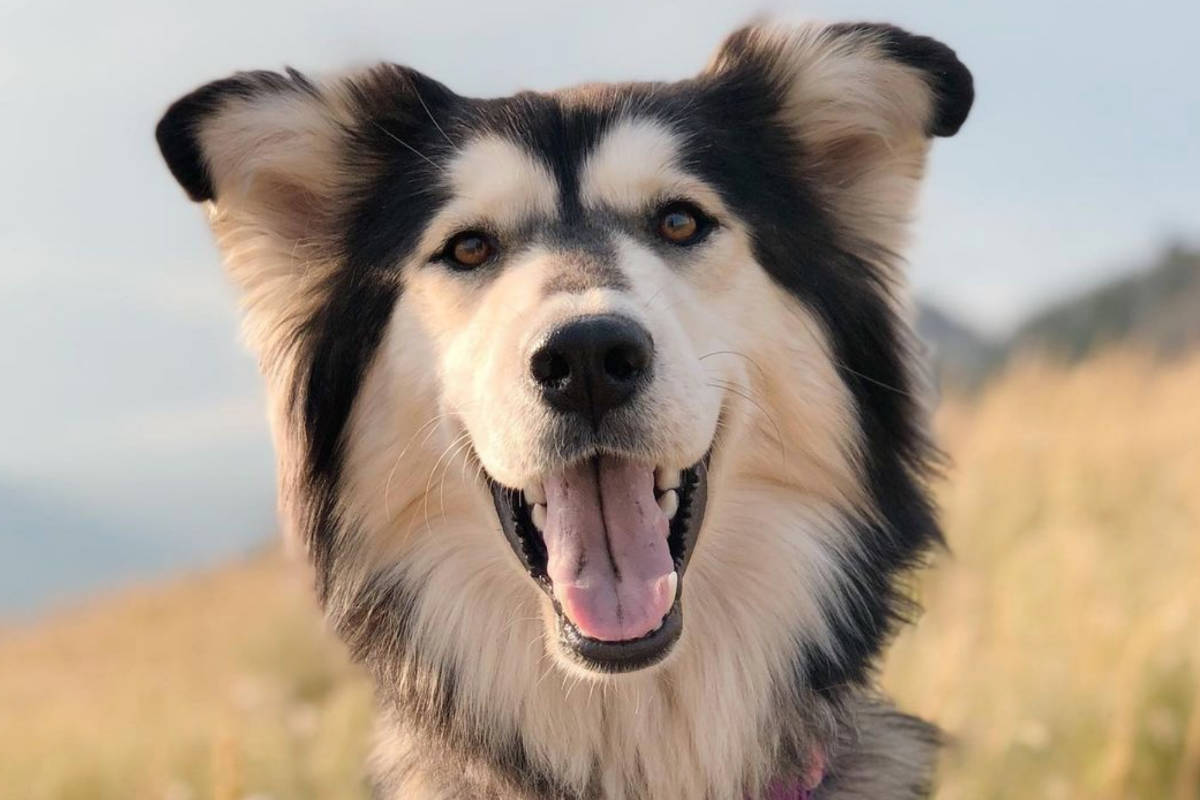 A Goberian is a cross between a Golden Retriever and a Siberian Husky.

As a relatively new hybrid dog, it’s difficult to trace their exact history but some breeders have been intentionally breeding Golden Retrievers and Siberian Huskies for the past couple of decades.

As a cross breed, Goberians will inherit traits from both Golden Retrievers and Siberian Huskies. It’s pretty rare to find a Goberian breeder so you may need to visit a local rescue shelter or dedicated Husky rescue organization. 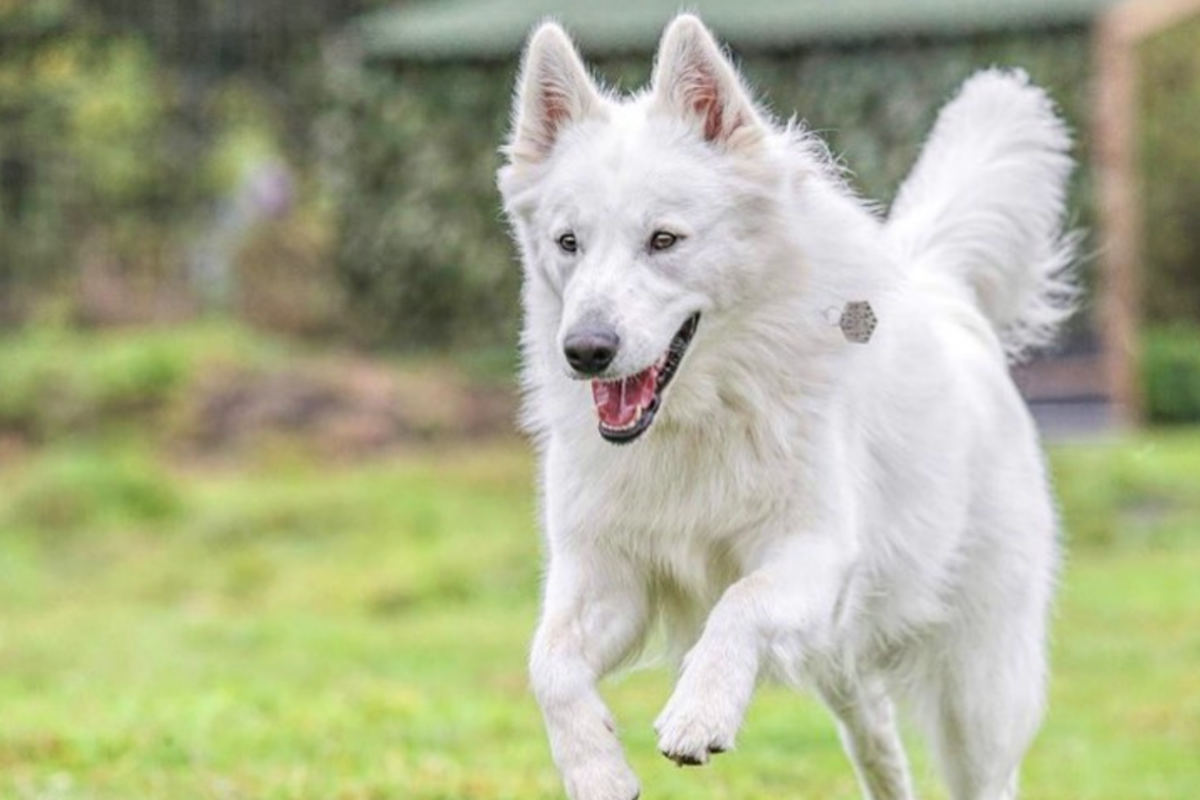 Golden Retrievers are medium-sized dogs that stands at 21.5 to 24 inches at the withers and weight between 55 and 75 pounds.

Siberian Huskies are a little smaller but are still considered medium-sized dogs. They’re around 20 inches to 23.5 inches tall and they can weigh 35 to 60 pounds.

Goberians can be anywhere between 20 and 24 inches in height and gain a weight between 45 and 80 pounds. 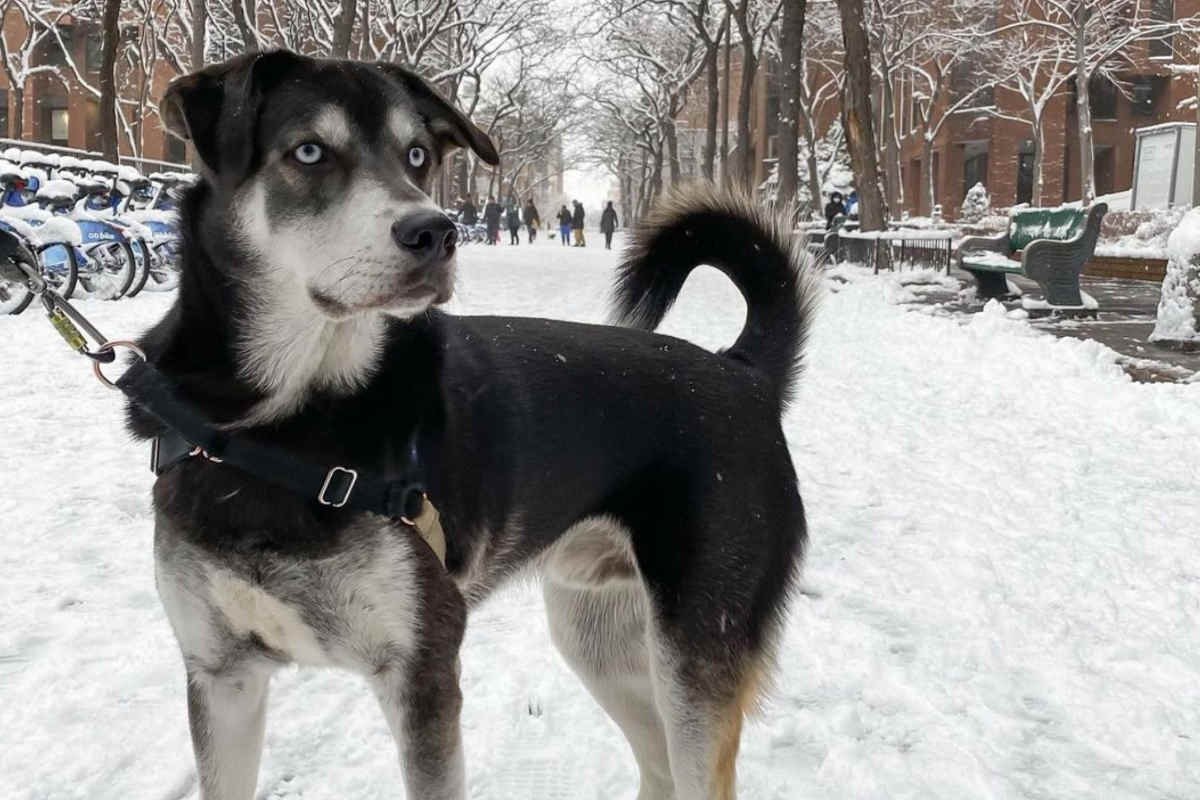 Golden Retrievers have a trademark golden, glossy coat with long, wavy hair to create an elegant dog. The AKC write on their website:

The Golden Retriever is a sturdy, muscular dog of medium size, famous for the dense, lustrous coat of gold that gives the breed its name. The broad head, with its friendly and intelligent eyes, short ears, and straight muzzle, is a breed hallmark. In motion, Goldens move with a smooth, powerful gait, and the feathery tail is carried, as breed fanciers say, with a ‘merry action.’

While Golden Retrievers have a classical appearance, the Siberian Husky are striking dogs. With a range of coat colors, they can be black and white, gray and white, red and white, white, black and more. Their eye color adds to their dramatic appearance with blue eyes, amber eyes, brown eyes, bi-eyes or parti-eye.

Goberians can range in appearance depending on whether they take after their Golden Retriever or Siberian Husky parent.

For instance, Hudson (@hudson_the_goberian) is an example of a Goberian that looks more like a Siberian Husky.

Hudson’s appearance is certainly more Husky. He has piercing blue eyes, a long curly tail, black and white coat, and thick tough paws. It is only when I see him standing next to a Golden that I realize the similarity in body type. Also, he is always smiling and has floppy ears, which he certainly gets from his golden half. 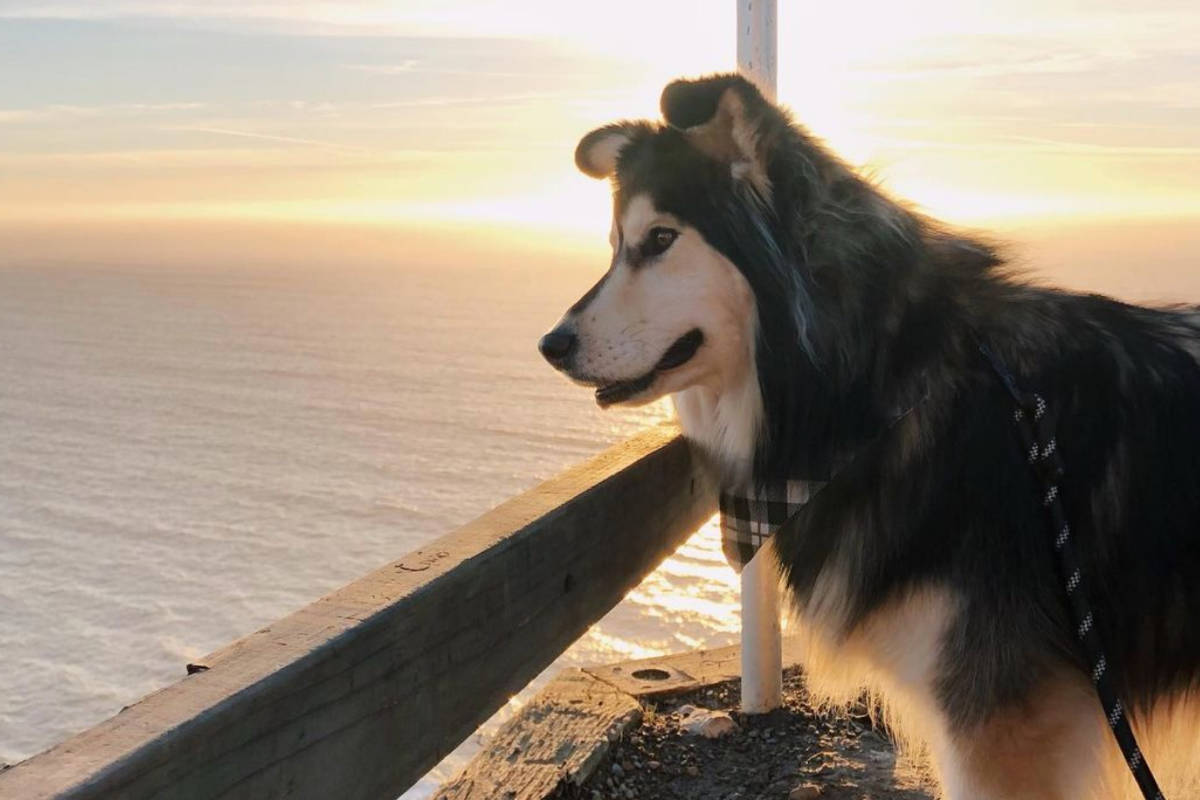 Golden Retrievers are described by the AKC as being friendly, intelligent and devoted. With a joyful demeanor, Golden Retrievers will thrive in a family setting thanks in part to their energetic personalities. They’re outgoing dogs who relish the chance to meet new people and new dogs. Traditionally used as gun dogs, Golden Retrievers have a lot of energy for walks and playtime.

Siberian Huskies, like Golden Retrievers, will also enjoy being part of a household given these sled dogs are historically pack animals who played a key role in the Chukchi tribe. The AKC provides a more detailed explanation of Siberian Husky temperament on their website.

As born pack dogs, they enjoy family life and get on well with other dogs. The Sibe’s innate friendliness render them indifferent watchdogs. These are energetic dogs who can’t resist chasing small animals, so secure running room is a must. An attractive feature of the breed: Sibes are naturally clean, with little doggy odor.

Sully (@sully_the_goberian) is a social dog that likes to receive a lot of attention, whether it’s from people he knows or strangers.

We are fortunate to have a good mix of the best bits of the two breeds combined in Sully. He’s super friendly with everyone and actively seeks attention from passers-by when we are out and about and keen to greet other dogs. We soon realised that he moderates his behaviour around children and tends to just roll over for tickles, which kids love. We couldn’t be happier with his temperament and generally he’s friendly with strange dogs, though like humans, there’s always the odd exception! 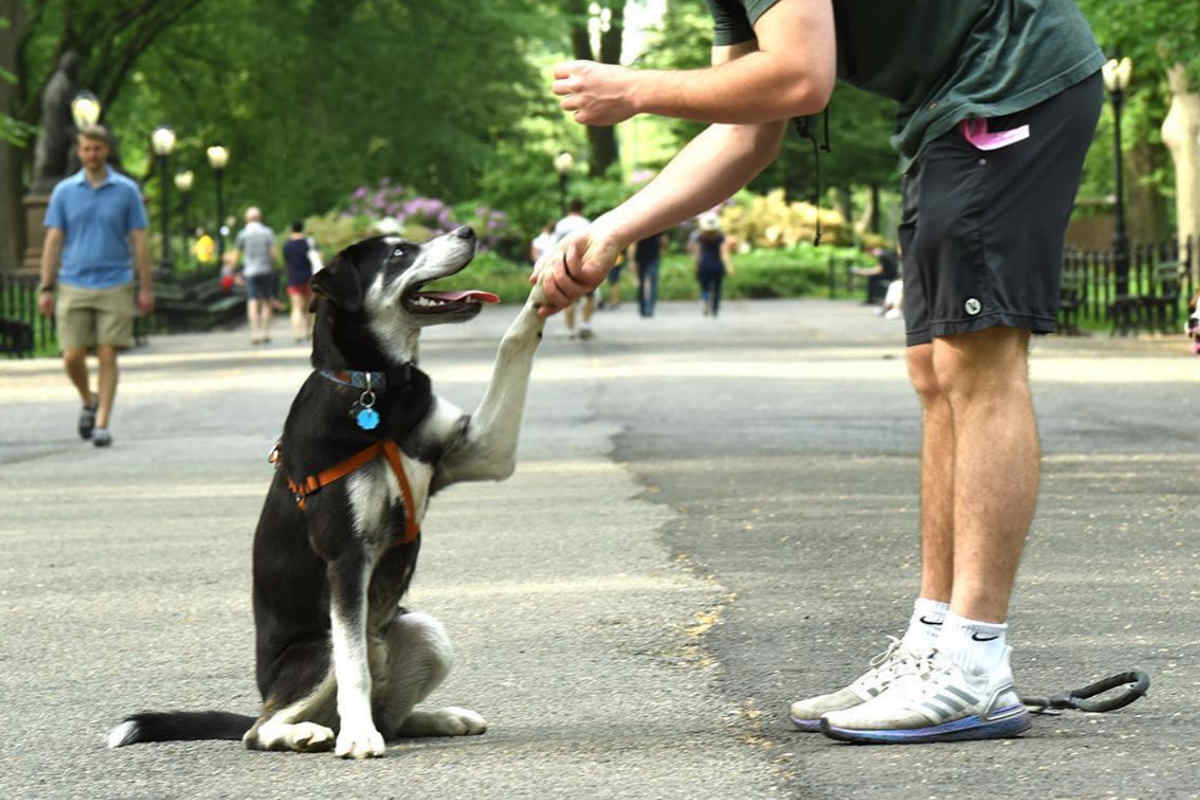 Golden Retrievers initially served a function as gun dogs before shifting into their modern role of family pets. As a result, they’ve got relatively high energy levels so they’ll need daily walks and playtime with the family.

Siberian Huskies were used to pull sleds over long distances so they’ve got substantial energy reserves. You’ll need to keep your Siberian Husky mentally and physically stimulated to prevent unwanted or destructive behaviours.

Absolutely! We try to take her, at the very minimum, on a walk every day. If she doesn’t exercise for a day and is cooped up inside, she can get a little stir-crazy and will pace around the house. We love taking her outdoors on hikes, trips to the beach, and playdates with other dogs. These activities are crucial to her health and well-being. 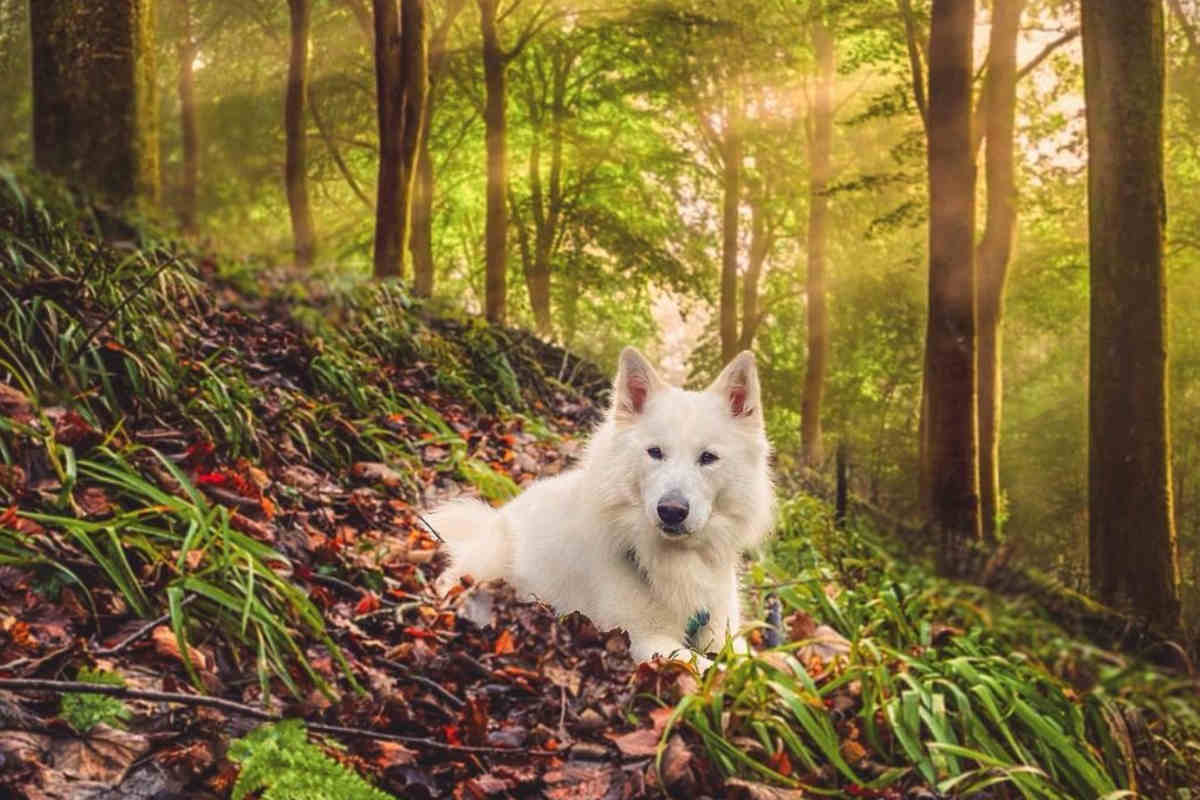 Golden Retrievers are considered one of the smartest dog breeds in the world, trailing the Border Collie, Poodle and German Shepherd in the IQ ranks. While we’ve mentioned their gun dog history, Golden Retrievers are commonly used as guide dogs which highlights their ability to learn commands, obediently follow instruction and underlying desire to please.

Siberian Huskies can be a little more challenging train due to that well-known stubborn streak found in the breed. There’s little doubt Siberian Huskies are smart, but they’ll require consistent and persistent training from a young age.

Goberians will embody traits from both breeds so you could have an extremely smart dog that likes to be an independent thinker.

Hudson (@hudson_the_goberian) was quick to pick up new commands but did struggle with walking nicely on a leash.

They are extremely intelligent. Not hard to teach them commands, however they are not extremely food motivated and tend to be a bit stubborn. If you find toys or balls to get his interest, you are in the clear. The largest challenge has been walk training. They are truly built to pull, so it takes some time to teach them how to walk side by side as companions. 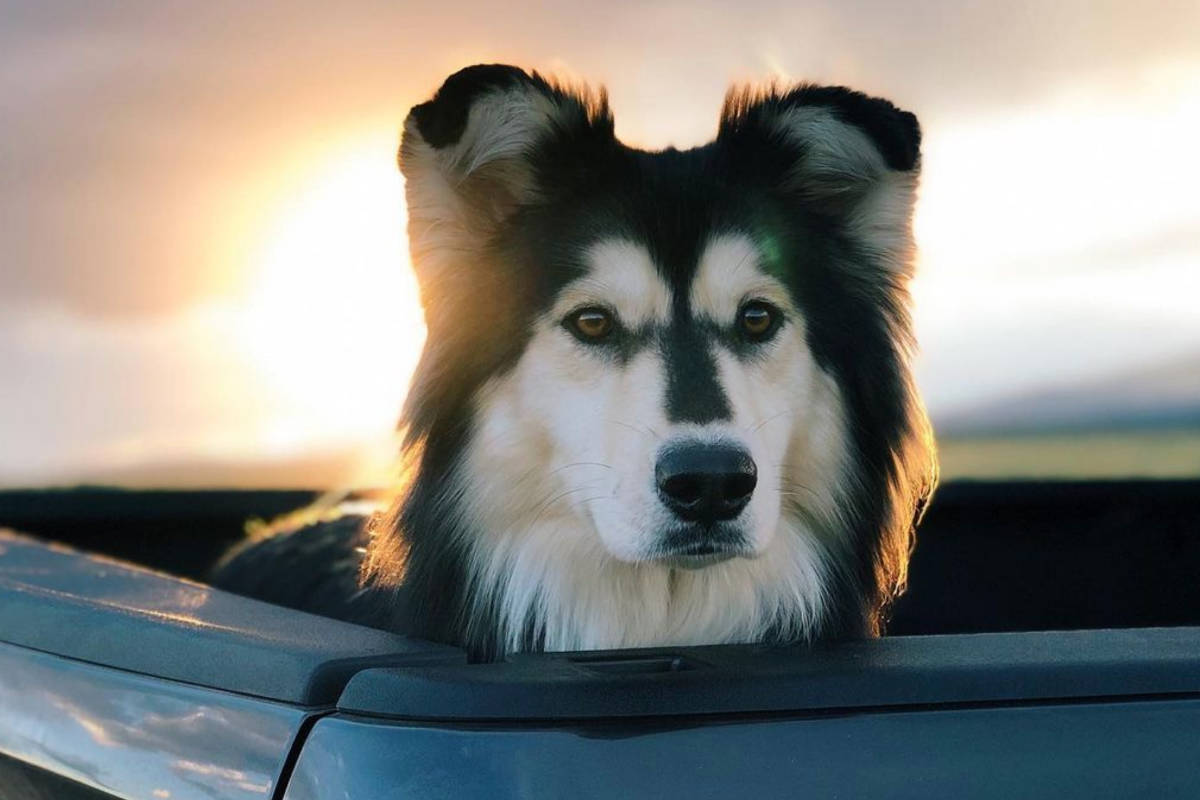 Golden Retrievers will heavily shed their water resistant coat at least twice a year but you can expect a certain amount of shedding all year round. They’ll require a good brush at least twice a week to maintain the appearance and health of their coat.

Siberian Huskies are known for their shedding so it won’t come as a surprise to learn these talkative dogs will leave a trail of hair on your clothes, furniture and floor. Like Goldens, they’ll blow out their undercoat at least twice a year.

Goberian owners will have to commit to a grooming session once or twice a week but their coat could reflect either their Golden or Siberian parent so that’s something to be aware of.

Affectionately known as Goberian Glitter. Shedding didn’t start until he was six months, not too bad at first but then we had the first proper blow-out from March which lasted two months. I wasn’t mentally prepared for this and neither was my hoover. It’s a never-ending snowstorm at this point and even with daily brushing we had dust-bunnies of hair in every corner. I hoover the house 2-3 times a day and it’s full every time. Dinner isn’t dinner unless we have a couple of Sully hairs in it. They blow their coats twice a year so it’s a real consideration if you are houseproud, and shed to some degree all year round. That said, not all Goberians are seasonal heavy shedders, it’s the luck of the genetic draw. 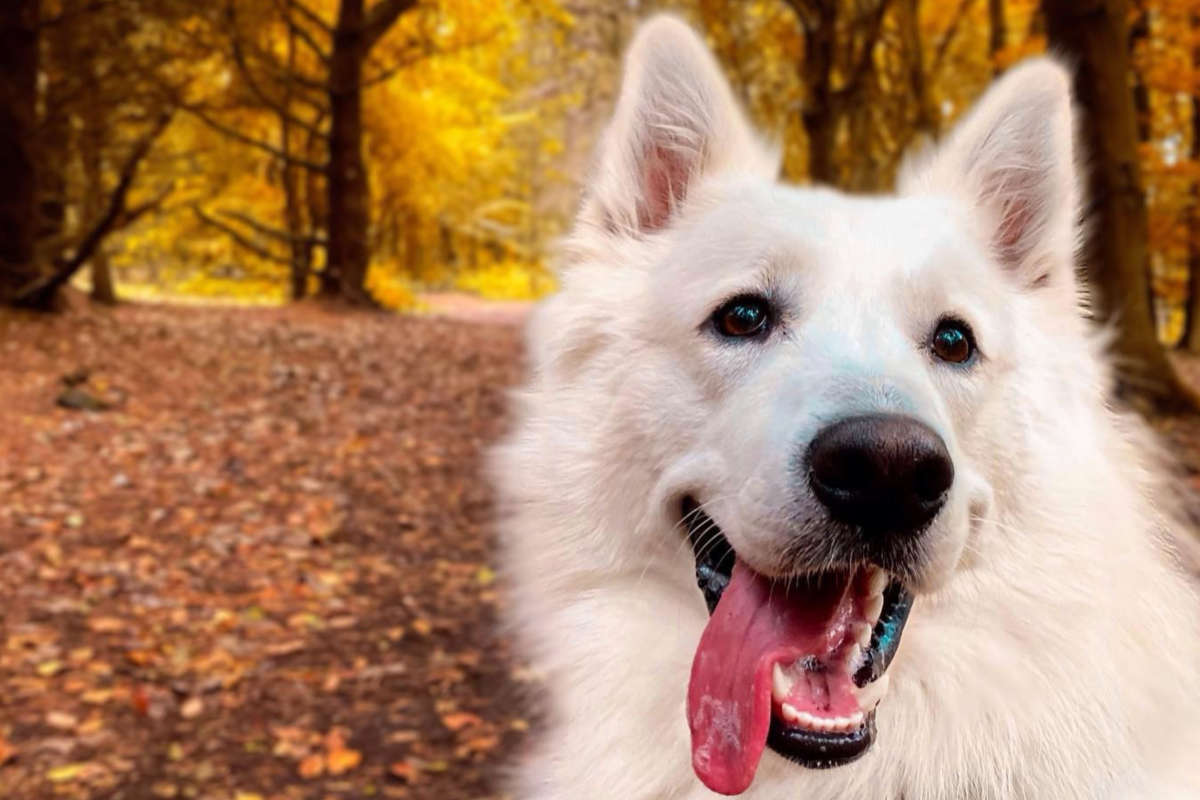 We’ve reached the end of our Golden Retriever, Siberian Husky and Goberian article.

All the dogs mentioned in this article share some similarities but have subtle differences.

Of course, Goberians will have a lot in common with both of the AKC-recognised breeds considering they’re the result of breeding between the two.