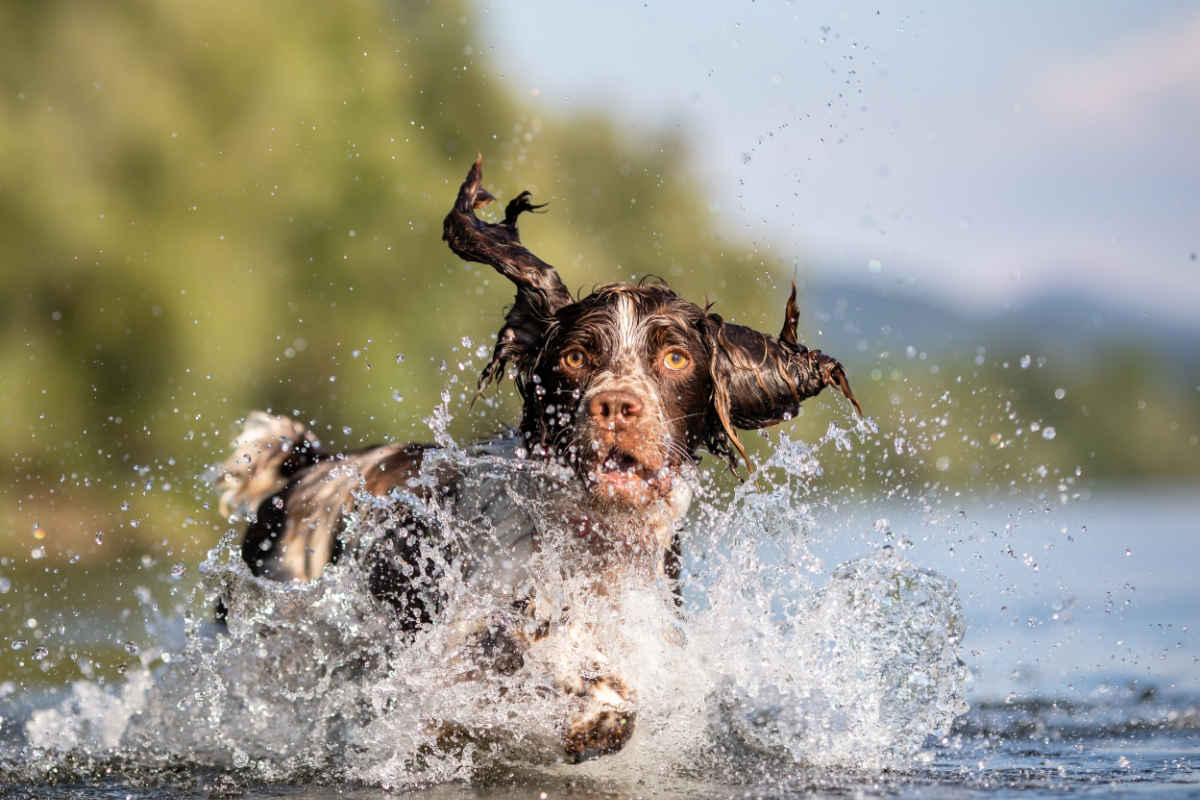 The English Springer Spaniel is a friendly, playful and obedient dog.

That’s according to the American Kennel Club who classify the breed as a member of their sporting group.

The English Springer Spaniel was recognised as a breed by the AKC all the way back in 1910, eight years after they were granted status by the Kennel Club of England.

In fact, these workaholics have risen to the 27th most popular dog breed in the United States.

You can find English Springer Spaniels with beautiful coats in the colors of black or liver and white, blue or liver roan and tricolor.

In this article, we’re going to take a look at English Springer Spaniels pros and cons, examining both the positive and negatives where this breed is concerned.

We’ll speak to some English Springer Spaniel owners to give you a unique insight into life owning these durable and intelligent dogs. We’ll hear from Lola and her owner (@life_of_lola_the_springer) and Ellie (@lifeofarthurandellie). 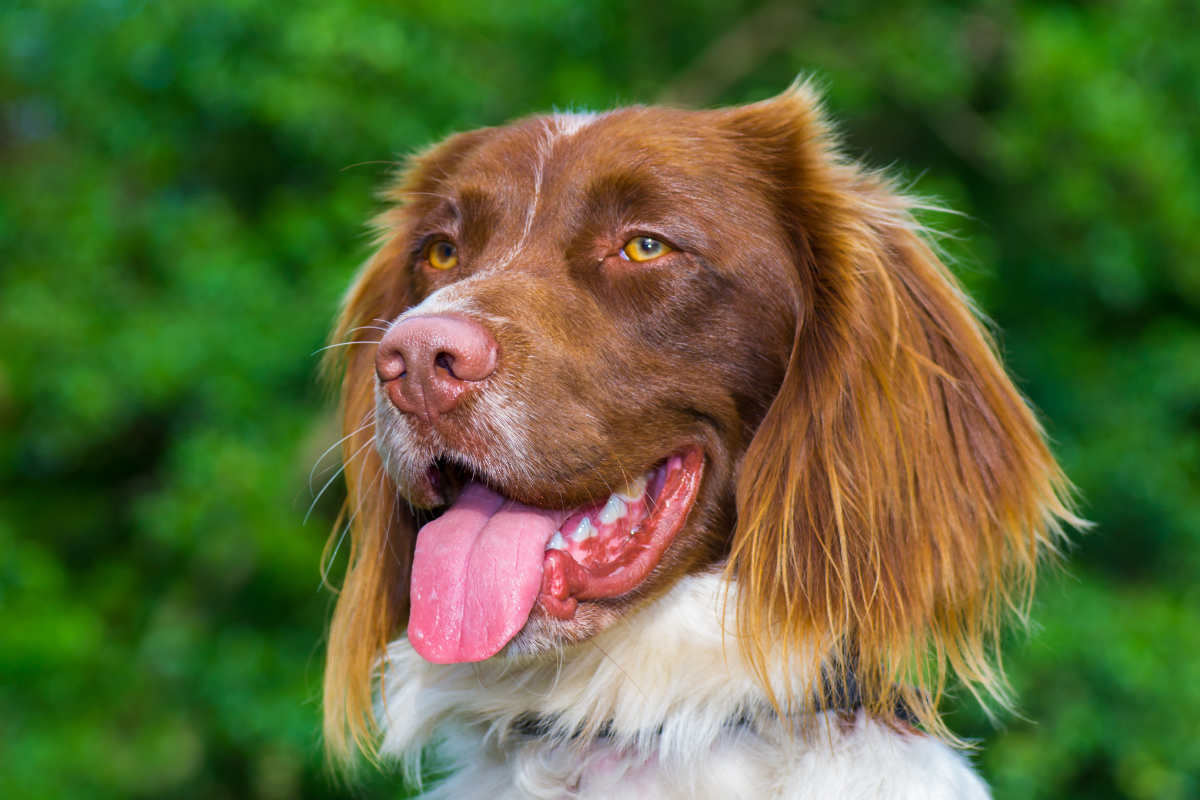 English Springer Spaniels have a reputation for being extremely smart dogs. So if you’re looking for a dog breed that won’t be difficult to train, these water dogs could be a good fit for you. The Intelligence Of Dogs, written by Stanley Coren in the 1990s, ranks the English Springer Spaniel as the 13th most-intelligent dog. According to the respected study, they understand new commands in 5 to 15 repetitions and obey the first command 85% of the time or better. Not bad! The AKC describes them as “highly trainable people-pleasers”.

Lola (@life_of_lola_the_springer) was a breeze to train.

I have done minimal training with her and she is the most polite dog which we are complimented on always. They are super super smart (sometimes too smart Lola knows how to open my doors / gates) and they learn SO FAST. They have amazing focus and they pick up new tricks so easily.

These lovable bird dogs are built for long days in the field, the AKC says. They usually stand between 19 to 20 inches at the shoulder and weigh between 40 and 50 pounds. The English Springer Spaniel’s size means that they’re easier to handle than big dog breeds, but they’re remarkably muscular.

I think big dogs can be over whelming and bouncy and too much to manage in terms of strength when walking them. I also think small dogs tend to not want to walk much and snappy. English Springer Spaniels are a medium size breed and would be perfect for anyone.

If you’re someone who likes to get out and get some exercise, you may have the perfect workout companion in the shape of the English Springer Spaniel. They’ve got deep energy resources – they’ll never tire out by your side. WAG Walking write on their website that the English Springer Spaniel require at least 90 minutes of football a day and the dog-walking organization recommend around 14 miles a week.

The temperament of English Springer Spaniels is known to be crazily energetic and fun. With my own ESS my experience is that indoors they are the most relaxed and calm dog I’ve ever known. My Lola is ready to nap whenever you are, but outdoors she is like a feral animal with energy for days. I could walk for miles and she still wouldn’t want to go home.

It very much depends on the dog but I find an hour off lead exercise with training is enough. When I’m working she may get less but when I’m off we often do more and she’s happy either way. I find mental stimulation tires her more than physical. 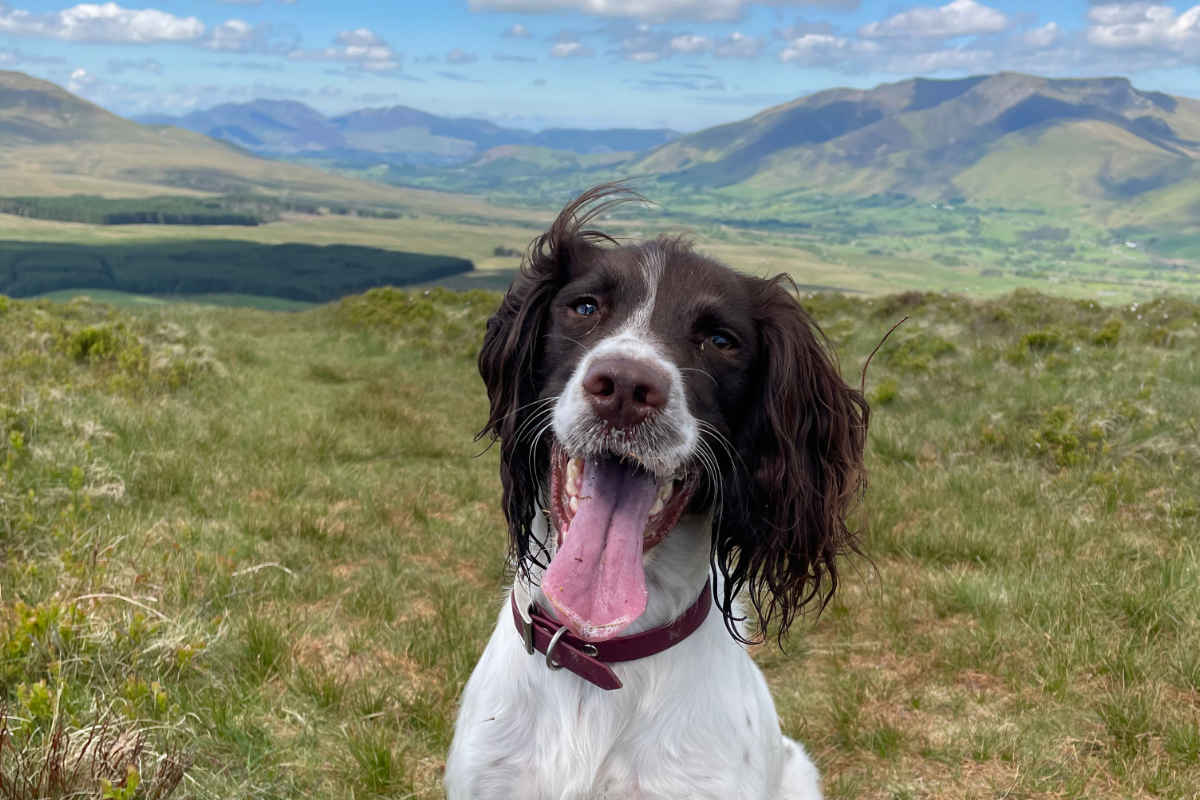 The AKC write that the English Springer Spaniel is good with kids and their fellow mammals (perhaps not avians, though). They’ll enjoy taking part in activities with their fellow family members, whether it’s a game of fetch, making a splash in the pool or going for a run. They’re described as lovey-dovey when it comes to being affectionate with family members and they’re reasonably good with young children. However, they should be supervised at all times just like any dog.

English Springer Spaniel are definitely family friendly. They have an amazing gentle and patient nature. Lola will literally lay there whilst you pull her hair without a care in the world. They love attention and cuddles but have the energy to match boisterous children.

They are happy, enthusiastic, playful dogs that make perfect family pets. Ellie loves playing with people including children. She doesn’t care much for other dogs, she’d rather people but she happily lives with our other dog.

For dog lovers who want a four-legged friend to be stuck to their side, the English Springer Spaniel could be a perfect candidate. Dubbed by some as the quintessential velcro dog, they’ll often select one member of the family to become most loyal to and remain by the side as much as possible. Having said that, Lola’s owners haven’t experience any separation anxiety, which can sometimes affect so-called velcro dog. 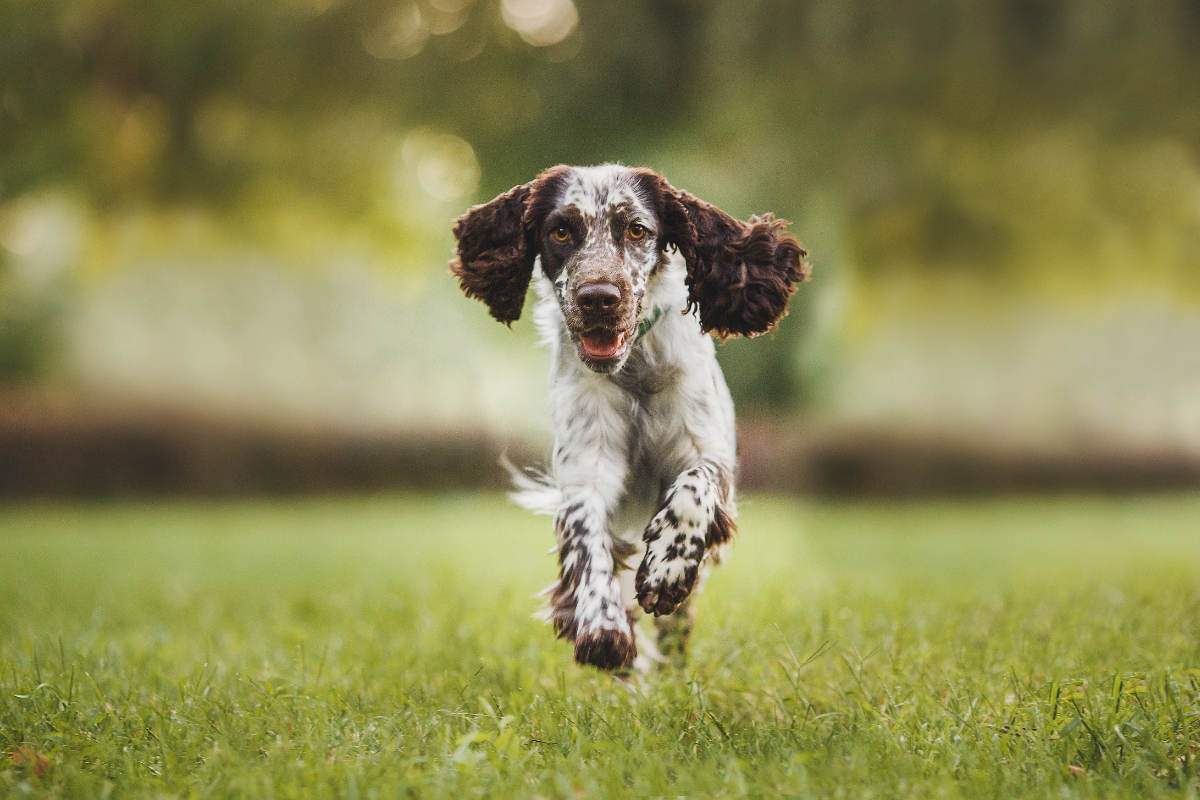 You won’t be surprised to learn that English Springer Spaniel can have a high prey drive. They were used as hunters of birds in the field and in water. They love games of chase and fetch seeing as they were used to retrieve game. It’s a good idea to work on their recall from a young age to build an understanding with your English Springer Spaniel.

Lola’s owners (@life_of_lola_the_springer) shared their insight into this trait.

Due to their natural instinct, they’re usually bird obsessed. Natural instinct will override even the BEST of training. This can be hard to manage when out on walks. We used to have Lola run off for miles and for long stretches of time chasing ducks. This was a danger to her and also not good for the birds being chased. We’ve had to learn to avoid certain areas and to also read Lola’s body language so we can distract her before she goes over that mental threshold. 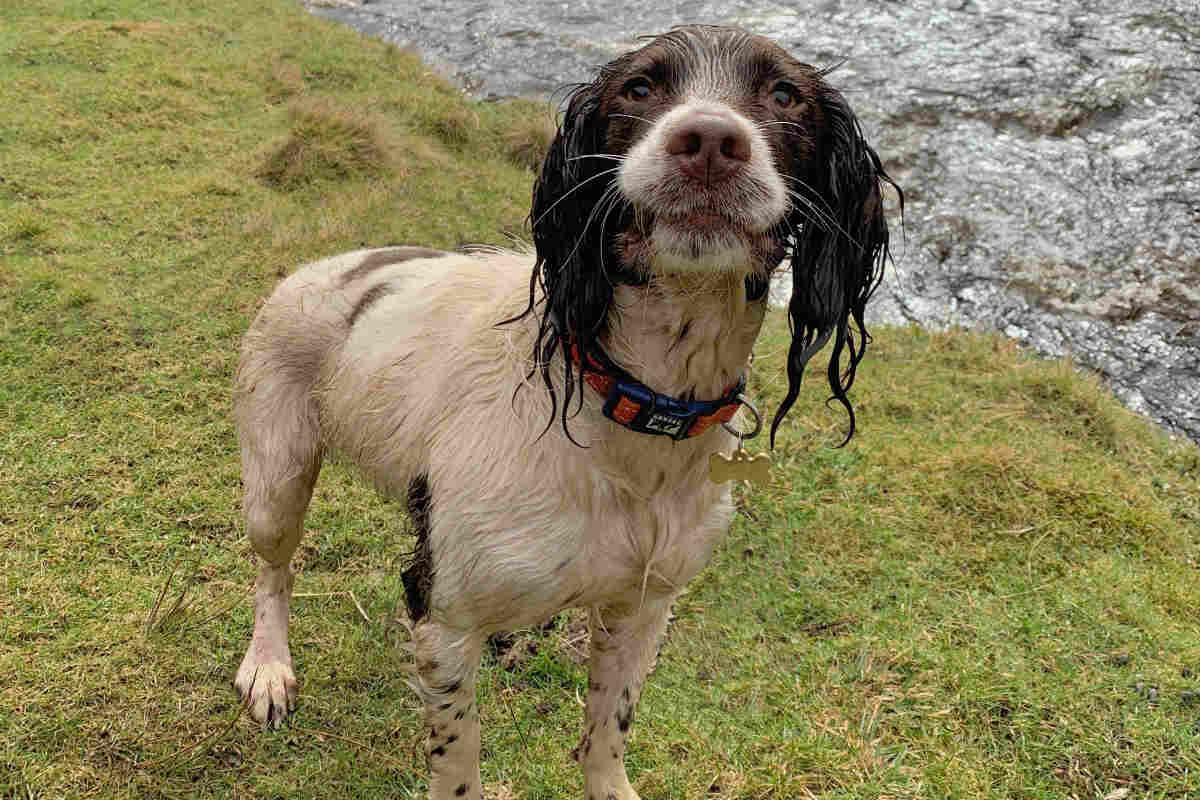 They are water obsessed if you don’t like mess and mud then a springer isn’t for you. I’ve given up on wearing nice clothes and I’ve accepted my house will never be perfectly cleaned.

It’s a point backed up by Ellie’s owner (@lifeofarthurandellie).

Water obsessed could be a con, Ellie never stays white for long but it don’t mind at all and I don’t see it as a con

As we touched upon above, English Springer Spaniels are smart dogs. But they require consistent and persistent training from a young age and even then, they’ll still find ways to outsmart their owners!

Here’s an example of just how smart Lola (@life_of_lola_the_springer) is.

They are SUPER smart you have to have your wits about you otherwise they’ll outsmart you before you know it. Think you can put them in an enclosed garden? Think again they’ve figured out how to open the gate and the door.

For some dog lovers, a dog breed that loves to exercise could be a good thing. But for others who prefer a more laidback life, English Springer Spaniels will enjoy some downtime but only after lots of exercise and plenty of mental stimulation. You’ll need to stay active with this breed!

Lola (@life_of_lola_the_springer) needs a lot of exercise, just like most members of the breed.

English Springer Spaniels require a lot of exercise – they might fool you by being lazy in the house but they are beyond energetic and need an outsource for that. We walk our Lola 1 hour in the morning and 2 hours at night making sure she’s able to have an off lead run.

English Springer Spaniels aren’t hypoallergenic dogs so if you’ve got an allergy to pet hair or pet dander, you may want to think twice before adopting one of these handsome dogs. The AKC recommends weekly brushing to remove dirt and loose hair and keep your Spaniel’s coat looking healthy and shiny. From time-to-time, some members of the breed may require a trip to the groomer for a trim.

While Lola (@life_of_lola_the_springer) sheds, it’s not a crazy amount.

English Springer Spaniels shed more than I thought they would but it’s not excessive. I’m able to leave my clothes lying around without too many hairs being on them. My furniture doesn’t show too many hairs either. We get Lola professionally groomed as and when we feel it required it typically is once every 8 weeks as we like to keep her feathering short due to her being a bugger for getting muddy on her walks.

Ellie (@lifeofarthurandellie) gets brushed every day.

They shed a lot! I brush her ears and feathers daily (with a normal brush) to prevent matting and the rest of her body with a mars coat king every 6-8 weeks.