Most dog lovers will be familiar with the most common Doberman color.

If you’ve previously seen a Doberman, there’s a good chance it’ll have been a black dog with brown markings.

But there is more than just one variety of Doberman.

Indeed, the German breed come in five different colors, which we will go through in this article.

Let’s learn a little bit more about Dobermans before we take a look at their different colors.

What is a Doberman? 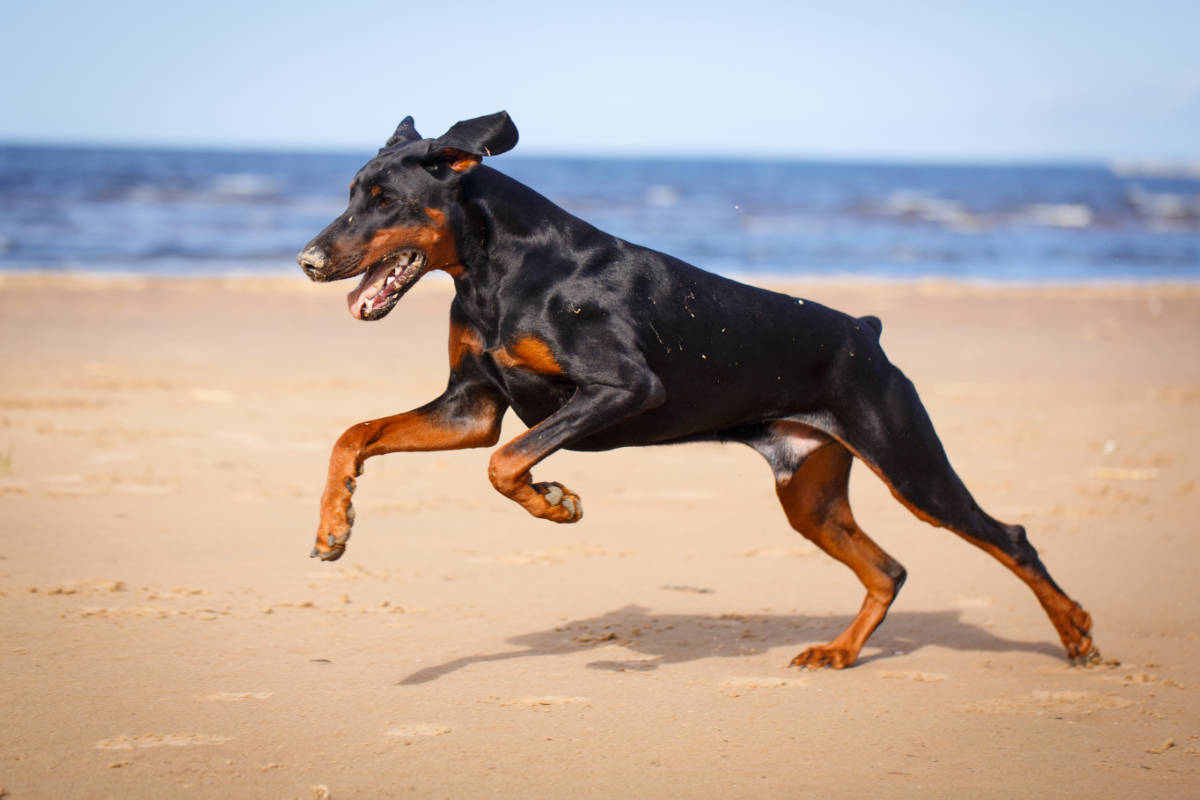 Dobermans are often described as a loyal, fearless and alert dog breed.

These athletic dogs were developed in the 1880s in Germany.

A German man called Karl Friedrich Louis Dobermann is thought to have created the first Doberman.

It’s believed that Karl worked at a dog pound in the German town of Apolda.

In preparation for his new job as a Tax Collector, Karl set about creating a dog that had characteristics such as stamina, strength and intelligence.

There are a number of different dogs that are thought to have played a part in the development of the Doberman Pinscher. These include the Beauceron, German Pinscher, Rottweiler, Weimaraner, Greyhound and Manchester Terrier.

Pinscher was dropped from the breed’s name in Europe and across the world, although Canada and the USA continue to use Doberman Pinscher.

The Doberman Pinscher was granted status by the American Kennel Club in 1908.

Allowed Colors-Black, red, blue, and fawn (Isabella). Markings-Rust, sharply defined, appearing above each eye and on muzzle, throat and forechest, on all legs and feet, and below tail. White patch on chest, not exceeding ½ square inch, permissible. Disqualifying Fault – Dogs not of an allowed color.

As we mentioned above, the black and tan Doberman is the most common variety. These Dobermans have hair color that is black and tan. Alternatively, Dobermans with this coat color can also be referred to as black and rust.

If you research Dobermans online, you’ll almost certainly encounter this color. In movies and television shows, Dobermans will almost always be depicted by black and tan Dobermans.

One of the standout features of the black and Tan Doberman is their shiny, sleek coat.

Owners of a black and tan Doberman should be careful about overly exposing these dogs to direct sunlight due to their tendency to overheat in extreme temperatures.

Black and tan Doberman meet the breed standard for both the American Kennel Club, the Kennel Club in the UK and other kennel clubs in Europe.

The next most common variety is red and rust Doberman.

If you’ve met more than one Doberman, there’s a fairly good chance you’ve said hello to a red and rust Doberman. Their coat color can range from dark brown to light brown, giving the appearance of chocolate. There are different shades of red, giving the red and rust appearance.

This type of Dobermans can also be called chocolate Dobermans.

According to Doberman Planet, some owners of red and rust Doberman claim that this variety is more “easy going”, “more light-hearted” and “less territorial”.

They go on to add that red and rust Doberman could be less prone to skin issues than other varieties.

In Europe, red and rust Dobermans can be called brown Dobermans.

Dobermansden write that the blue color could be charcoal gray, silver or purple in tone.

The American Kennel Club do accept blue and rust Doberman as meeting the breed standard. That’s not the case in Europe. Having said that, Doberman Planet write that the blue color can be a disqualifier for some dog shows.

In terms of potential issues that blue Dobermans can suffer, the chief health condition to be aware of is color dilution alopecia. CDA is a genetic skin condition that can result in hair thinning or loss, as well as dry or itchy skin.

As we mentioned above, the gray Doberman is the same as a blue Doberman.

The fawn Doberman is a another less common shade. The fawn color is a dilution of the red color in the German breed. The fawn color can sometimes be referred to as the Isabella color.

Once again, the American Kennel Club view fawn Doberman as an acceptable color. This isn’t the case in Europe. They’re the less common of the four Doberman colors.

Like the blue Doberman, the fawn Doberman isn’t readily bred and can still prove to be a disqualifying color. Hence, they’re avoided by breeders, which makes them even more rare.

Here is the DPCA to explain a little bit more about white Dobermans:

Albino (“white”) Dobermans quickly gained a niche market for their novelty. They have been exploited for years by unscrupulous breeders who sell these poor dogs as “rare white” Dobermans. In truth, they suffer from the significant health issues that are common to albinism: photophobia/photosensitivity (abnormal intolerance to light), skin lesions and tumors (skin cancer). These animals also often have temperament issues due to their lack of visual acuity and many end up in animal and Doberman rescues abandoned by owners ill-equipped to handle them.

Black Doberman are extremely rare and don’t satisfy the breed standard, just like the white Doberman.

They’re the result of a genetic rarity that causes the excess production of melanin pigmentation, making them appear completely black in color. Usually, they will still have the typical Doberman markings, but they’ll be exceptionally dark colored and difficult to see.

Let’s check out some famous Dobermans on Instagram to get a better idea of the variety of coat colors.

The Doberman Pinscher Club of America warn that Blue and Fawn Dobermans are more prone to coat and skin problems:

This arises from the way the MELANOCYTES are deposited on the hair shaft itself. These are what “color” the hair shaft . It is very irregular in pattern compared to the Blacks and Reds and the hair itself is softer and has a difficult time coming through the follicle and emerging through the skin. There is a higher incidence of ingrown hairs and staph infections because of the nature of the hair shafts themselves. 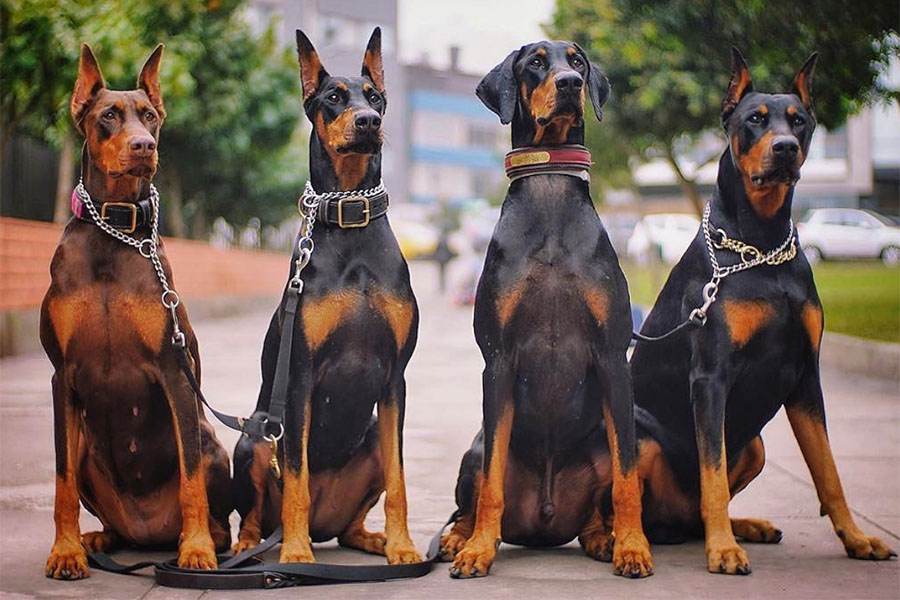 So there you have it, there are four acceptable Doberman colors in the United States of America. These are black and tan, red and rust, blue and fawn Dobermans.

In Europe, only black and tan and red and rust Dobermans meet the breed standard. It’s worth noting that red Dobermans tend to be called brown Dobermans in Europe.