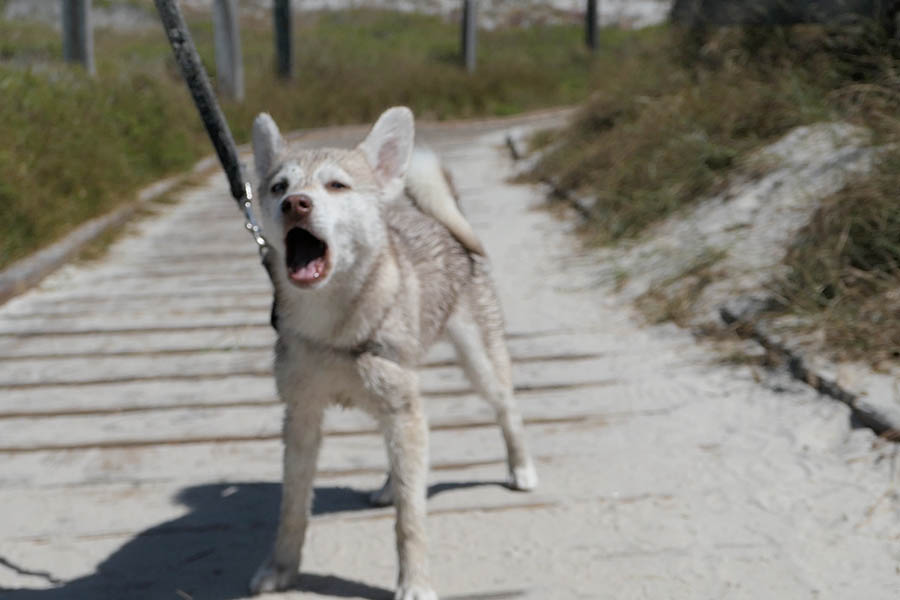 Alaskan Klee Kai have a reputation for being vocal dogs (Photo: lifewithkleekai / Instagram)

Alaskan Klee Kai are beautiful dogs that can sometimes be vocal.

These small dogs are great for apartments, especially for those who live in cities and towns but don’t have the space to have an Alaskan or Siberian Husky.

They may not be the same size as their sled dog relatives and can differ in a number of different ways, but they do share some of the same characteristics as huskies.

Notably, they can be vocal, so prospective Alaskan Klee Kai owners should be prepared for potentially owning a talkative dog.

They like to bark, howl, yodel and talk much to the delight of their human companions – most of the time.

Alaskan Klee Kai are purebred dogs that were created by an American lady called Linda Spurlin in the 1970s.

Klee Kai are companion dogs that small-to-medium in size. They come in three different sizes (standard, miniature and toy) and three different colors (black and white, gray and white and red and white).

The Alaskan Klee Kai is a breed recognised by the UKC since 1997.

Alaskan Klee Kai are a breed that can suffer from separation anxiety (Credit: lifewithkleekai / Instagram)

Alaskan Klee Kai are vocal dogs and can prove to be great communicators with perceptive owners.

The breed have their own distinctive little voices that can indicate whether they’re happy, want to play or disgruntled with their owner.

These apartment-sized pets make good watch dogs and will alert their human companions if there is someone at the door, whether they’re a friend or a stranger.

While they are superb when it comes to making their owners aware of unfamiliar sounds, their size doesn’t make them effective guard dogs.

Indeed, Alaskan Klee Kai are very skittish around strangers and people they don’t know, so they’re more likely to retreat rather than protect.

This, of course, could prove to be a nuisance for those who live in an apartment block or a housing complex with noise sensitive neighbours.

However, an experienced dog trainer could help to address their barking should this become a problem.

For the most part, Alaskan Klee Kai have endearing little voices that only add to their lengthy list of qualities.

This breed loves to make noise when playing, whether their partner in crime is another dog or a human.

Some other dog owners could misconstrue their tiny growls for aggression, but it is normally a sign that an Alaskan Klee Kai is having fun.

Indeed, if you’re concerned, just glance towards their tail and if its wagging and/or its butt is in the air, be assured everything is ok.

Alaskan Klee Kai have a reputation for being boisterous when it comes to play time, so it is important to keep an eye on them to ensure their play pal is comfortable with a game of rough and tumble.

This breed of dog is not afraid to give their owner a stern telling off with a series of brief but sharp barks. Often, it could be if the Klee Kai is left alone for too long in its crate or at home when the owner is at work.

Given this breed are direct relatives of Alaskan and Siberian Huskies, it shouldn’t come as a surprise that the breed are prone to the odd howl or two or three.

Indeed, this breed, like other northern breeds such as American Eskimo dogs, seem to be genetically predisposed to howling.

The howl is adorable and endearing – and it can mean a number of different things.

Some Alaskan Klee Kai will howl if they see another dog on a leash or a mischievous squirrel climbing a tree.

It could be a result of your dog being stimulated by a sound: sirens, musical instruments, the radio, YouTube videos or other howling dogs.

The breed sometimes howl on demand, often communicating with their owners in a howl off.

It could also be a symptom of separation anxiety if your dog is distressed at being left home alone.

Alaskan Klee Kai are known to suffer from separation anxiety, so prospective owners should be prepared for this issue to surface. The breed love companionship and can become very bonded to their human owners. While this can result in a lot of love around the house, namely a permanent shadow, it can also have its downsides. Some Alaskan Klee Kai will get very upset if left home alone. Indeed, separation anxiety occurs when a dog that is very attached to its owner gets extremely agitated and stressed when left alone.

The symptoms of separation anxiety include but are not limited to barking, crying, howling and whining. Naturally, this is a big problem if you have neighbors close by and could soon land you in trouble with your landlord or leasing office.

It can happen in varying extremes. Some Klee Kai will bark for five or ten minutes before they settle down and sleep for the majority of the time that their owner is away from home. However, other Alaskan Klee Kai can keep crying for in excess of an hour, and in some extreme cases, might howl and whine until reunited with their owner.

There are a number of potential solutions to this problem, including purchasing a dog camera that allows the owner to talk to their canine companion and even throw treats.

Baylee (@myloveonpaws) has experienced this issue with her Klee Kai.

Yeah she does. When I got her I immediately started to train to leave her alone and it worked really well. But as I’m still living with my parents, there’s someone at home most of the time so she doesn’t really have any routine of being alone at home. Somehow it’s kind of okay for her to be alone at home when my parents are the ones who leave her alone. But when I’m the last one who’s leaving the house, she’s whining and howling all of the time.

Are Two Alaskan Klee Kai Are Better Than One? 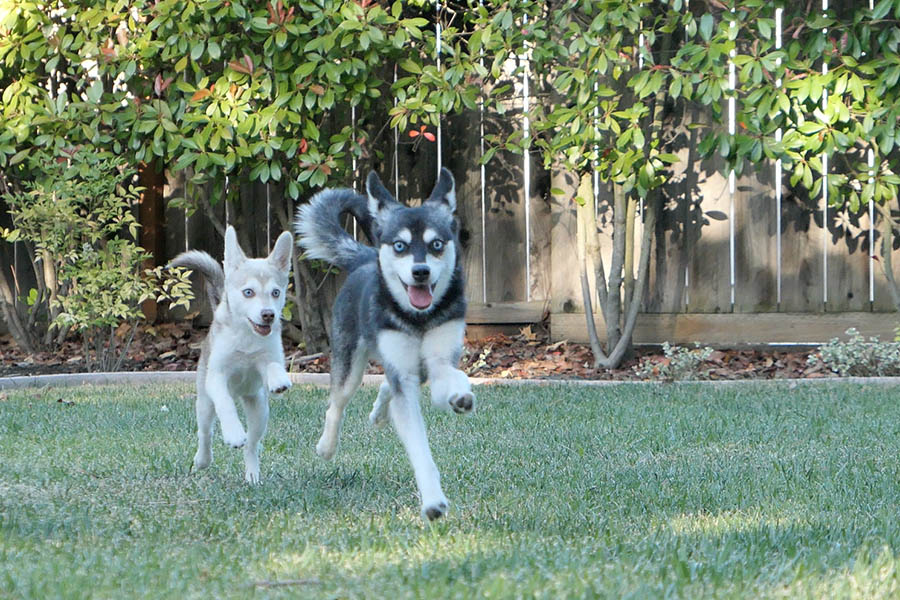 One way to potentially help ease an Alaskan Klee Kai’s separation anxiety is bringing home another dog. The breed are pack dogs given their roots in Alaska and love company, whether it be from other dogs or humans.

Some owners have found getting an Alaskan Klee Kai can help to ease the issue (or another dog of any breed). The company can help to soothe the concerns of a Mini Husky suffering with a bout of separation anxiety. However, a second pup won’t necessarily solve the problem. Indeed, it could serve to magnify the issue if your second dog suffers with the same anxiety.

If you do purchase a second Alaskan Klee Kai, be prepared for the noise levels to rise significantly. Indeed, the breed love to communicate and won’t be afraid to give their sibling a stern telling off if they want the same treat or toy.

Yasmin, owner of Life With Klee Kai (@lifewithkleekai), explained why she believes two Klee Kai are better than one.

A million percent YES. We got Skye before Copper and had only intended on having her, but after a few months, my husband and I felt like she needed a playmate since we could see how happy she was at the dog park. Getting Copper was the best decision we ever made! They are best friends, they eat together, play together, sleep together and argue with each other. They are never bored and their bond is just incredible. Our breeder did an amazing job helping us choose a puppy whose personality would mesh with Skye’s. Because she is so confident and dominant we were worried about how she would react to a new puppy. She was upset for the entire five-hour drive home when I was sitting with puppy Copper (she refused to look at me or even sit near me), but once we put them on neutral ground, Copper held his own against our sassy girl, the playing started and hasn’t stopped since.

– The breed have four different coat colours: black and white, grey and white, red and white, and albino.

– These Mini Huskies have two predominant eye colours, blue and brown, but bi-eyed is not uncommon for Alaskan Klee Kai. Indeed, some of these dog could even have a parti-eye (brown and blue in the same eye).

– Alaskan Klee Kai tend to cost between $800 and $3000 depending on the breeder. We recommend doing thorough research.

Of course, each Alaskan Klee Kai may be different.

Take my Klee Kai for example. My older dog Skye isn’t vocal unless she’s playing. Her brother, on the other hand, will sometimes talk to us if he’s feel a specific emotion.

So there you have it, Alaskan Klee Kai can be vocal dogs. They’ll make a variety of sounds, from a woo-oo or howl, to a sharp bark or yodel.