By helloBARK!
Updated on 4 February 2020

Cockapoos can come in a wide variety of different colors.

For the uninitiated, the Cockapoo is a cross between a miniature or toy Poodle and a Cocker Spaniel.

The cross breed combine the characteristics of both their Cocker Spaniel and Poodle parent.

They’ve earned a reputation for being a hypoallergenic cross breed suited to those looking for a low shedding dog.

If you’re researching about Cockapoos, you’ll probably have come across a number of different colors.

In this article, we’re going to breakdown the different variety of Cockapoos.

What is a Cockapoo

A Cockapoo is a cross between a miniature or toy Poodle and a Cocker Spaniel. Although they’re usually called Cockapoos, they can also be described as a Cockapoodle or a Cock-a-poo.

The cross breed is thought to have originated in the 1960s but they’ve enjoyed a surge in popularity over the past couple of decades due to their low-shedding coats.

A number of different Cockapoo clubs have been established in an attempt to try to regulate the Cockapoo breed more to encourage uniformity and responsible breeding. 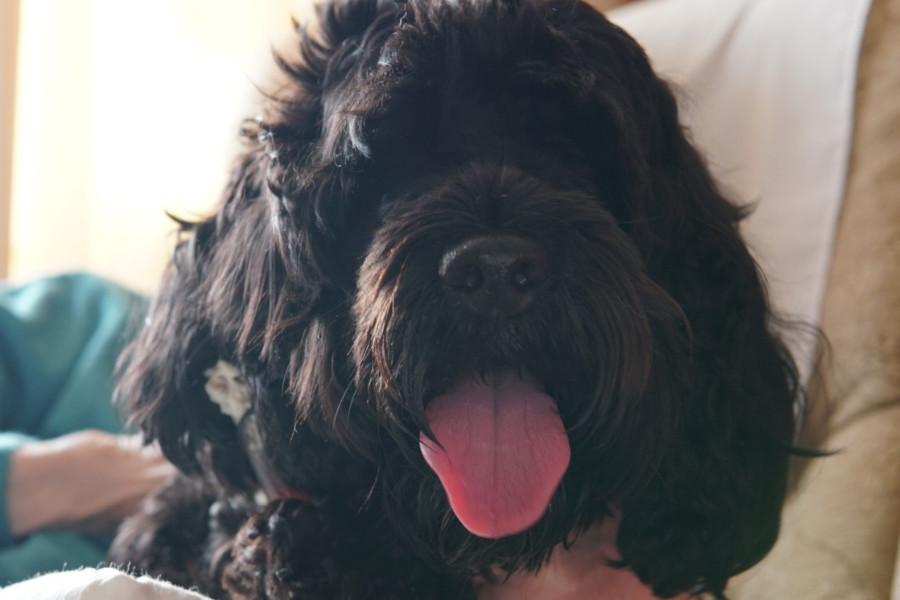 The size of a Cockapoo will vary on the parents. It’s usually determined by the Poodle parent, who can come in standard, miniature and toy.

Usually, Cockapoo breeders use miniature or toy Poodles to breed with the Cocker Spaniel parent.

Other Cockapoo features to look out for include their rounded heads and floppy ears. They’ve got dark eyes under bushy eyebrows. Cockapoos should have a sturdy appearance.

Their coats are curly and medium in length. They’ll need a regular trim to ensure their coats don’t get too long and drag along the ground. The texture of the coat is usually curvy or wavy.

Cockapoos can have different coats depending on whether they take after their Poodle or Cocker Spaniel parent more.

As we mentioned above, Cockapoos can come in a wide variety of colors.

One of the most common Cockapoo colors is black. They can come in solid black, which is an all-black coat as the name suggests.

Alternatively, some black Cockapoo can fade in color due to the fading gene, which is inherited from the Poodle parent.

Chocolate Cockapoos can have come in varying degrees of brown, from dark chocolate to a lighter milk chocolate color.

Just like the fading black Cockapoo, there are also fading chocolate Cockapoos. They fading color can have the appearance of cafe au lait or silvery beige.

Apricot Cockapoos have a light brown/red coat which vary in strength throughout their hair.

Solid dark red Cockapoos have a coat color that is similar in shade to an Irish Red Setter.

Although fading red Cockapoos might be born with a dark red coat, their color gradually diminishes over time into a light red.

The white Cockapoo has an all white coat with a black nose and dark eyes. They’re coats will need be cleaned and wash to maintain their smart appearance.

Blonde is another light color variety of the Cockapoo. They’re have got blonde hair with a relatively long coat. The color is slightly darker around their ears and muzzle.

So we’ve covered Cockapoo colors but they can also have different coat patterns. This occurs when their are solid coat colors combined with lighter colors. The areas of color can vary from Cockapoo to Cockapoo.

Some black Cockapoos can have a tuxedo pattern. This is when their coat is predominantly black with a splash of white on the chest and the chin, which gives the appearance of a tuxedo.

Similarly, the chocolate tuxedo pattern occurs when a Cockapoo has a dark or light brown coat with a splash of white on the chest and sometimes on the chin.

Another striking coat pattern is the black phantom. This is when a Cockapoo has a solid black coat with lighter coloring around their eyebrows, muzzle, legs and feet. This lighter color could vary from brown, tan, cream to white.

You may have heard of tri-colored Cavalier King Charles Spaniels or Dachshunds, but Cockapoos can have a tri-color pattern – too. They’ve got three different colors in their coat.

Sable is another coat pattern that is common to a lot of breeds. This occurs when a Cockapoo has a base color with tips of their fur that have different colors. For example, they could have a brown coat with lighter tips such as cream and red. Usually, Cockapoos will either be chocolate sable or red sable.

Yet another coat pattern that isn’t exclusive to the Cockapoo. Parti Cockapoos have a coat that is roughly 50 per cent white and 50 per cent another color such as black or brown.

Roan Cockapoos have a base color such as brown or white with lots of white hair or areas of white mixed into their coat. Usually they’ll be called blue roan or brown roan Cockapoos.

So you’ve decided you want a Cockapoo puppy but you’re unsure about the color. Should you expect to pay more depending on the coat color of your pup? You will find breeders who charge more for a so-called rare color. However, the Cockapoo Owners Club UK have some useful advice about this issue on their website:

Breeders can be clever with their marketing, often drawing in people with the word “rare ” in terms of colour and charging a premium. Please note often many colours will fade and the puppy you started off with could look completely different as an adult. In our opinion colours and the sex should not affect price, one pups life should not be valued “more” than anothers. A good breeder will not be segregating their litter into which ones can be sold for a higher price, but would value all the pups in the litter equally, over any monetary gains.

So there you have it, Cockapoos can come in a wide range of different coat colors and coat patterns. It’s a good idea to educate yourself about the different names and terms when doing your research before you buy a Cockapoo. You can also check out Cockapoos on Instagram to learn more.