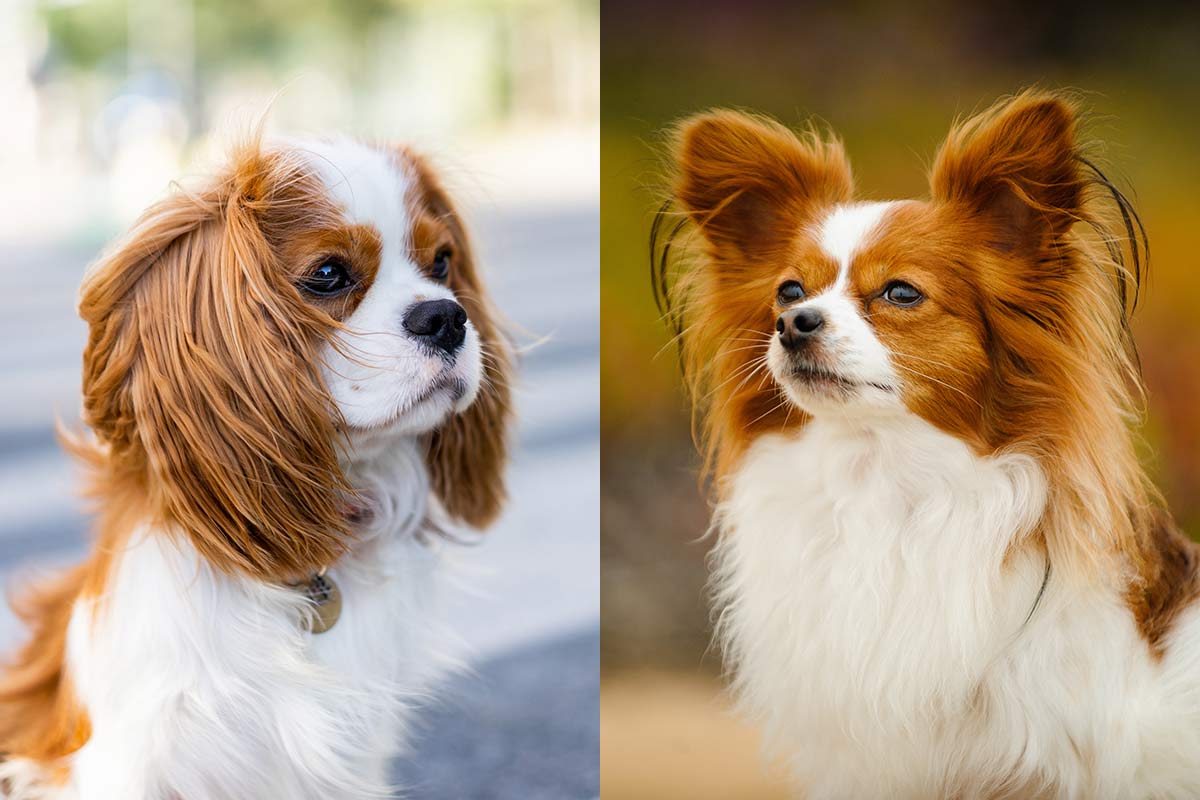 By Kieran Beckles
Updated on 7 October 2022

Do you know the difference between a Cavalier King Charles Spaniel and a Papillon?

You’d be forgiven for confusing these two breed seeing as they’ve got similar coat colors.

However, the Cavalier King Charles Spaniel and the Papillon are two different dog breeds that are both recognised by the American Kennel Club and the Kennel Club in the UK.

The Cavalier King Charles Spaniel and the Papillon are two of the friendliest dog breeds who enjoy meeting new dogs and new people.

In fact, they can make excellent pets but it’s important to note that they’ve got different physical and temperamental characteristics that we’ll highlight in this article.

With the introduction over, let’s start our feature on Cavalier King Charles Spaniel vs Papillon.

What Is A Cavalier King Charles Spaniel?

The Cavalier King Charles Spaniel is an affectione, gentle and graceful dog breed that is recognised by both the American Kennel Club and the Kennel Club in the UK. The Cavalier is a member of the AKC’s Toy Group. They’re considered the quintessential example of a companion dog breed because Cavaliers love to spend time with their family members and are more than happy to relax on your lap.

What Is A Papillon?

Papillon are an alert, friendly and happy dog breed that is also recognised as a dog breed by the American Kennel Club and the Kennel Club. Just like the Cavalier, the Papillon is a member of the AKC’s Toy Group. They’re easily recognisable for their trademark butterfly ears, with the physical trait lending itself to the breed’s name. Papillon means butterfly in French.

Where Do Cavalier King Charles Spaniel Come From?

These small Spaniels remained popular with the aristocrats in the UK and elsewhere throughout the centuries thanks to their amenable personalities and lapdog temperament. The influx of dogs from Asia led to a slight alteration in their appearance heading into the 20th century.

However, the Cavalier King Charles Spaniel returned to their traditional style in the 1920s when a wealthy American Roswell Eldridge offered a cash prize to British breeders who could best revive the old style of Cavalier.

The Cavalier King Charles Spaniel was granted status by the AKC in 1995. These cheerful dogs are the 15th most-popular dog breed in the USA.

Where Do Papillon Come From? 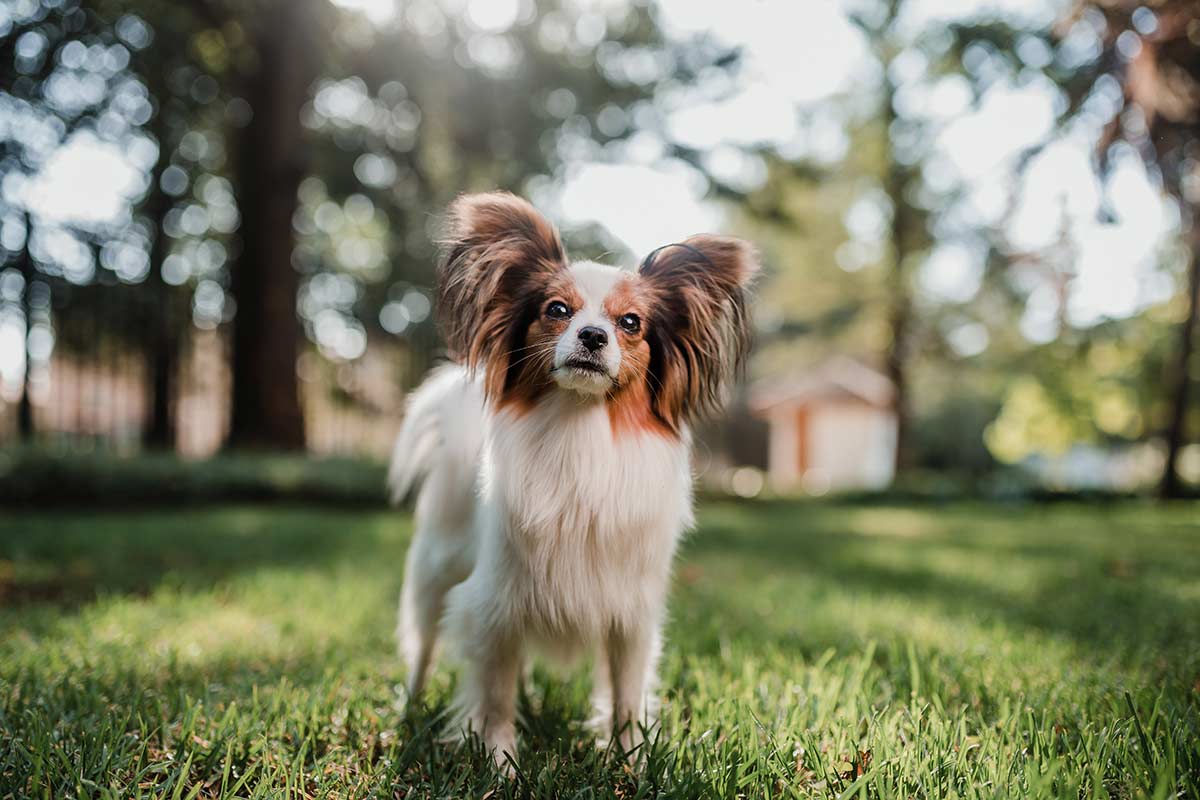 While the Cavalier King Charles Spaniel were making perfect companions for monarchs in the UK, the Papillon was busy warming laps of noblewomen in Europe. They were a common sight in the royal courts of Europe, proving particular popular with Queens and Princesses.

The breed was thought to have originated in Renaissance France as breeders crossed toy breeds with Spaniels to create the Papillon. The breed was particularly popular in France, Belgium and England. They’ve featured in paintings by some well-known artists such as Watteau, Gonzales Coques, Fragonard and Paolo Veronese.

The Papillon is sometimes dubbed the Squirrel Spaniel seeing as their tails curl over onto their backs like a squirrel. In non-English speaking countries, the breed is usually referred to as the Epagneul Nain. As we mentioned above, Papillon translates to butterfly in French.

The Papillon was first recognised as a breed by the AKC in 1915. At the time of writing, these butterfly dogs were the 54th most popular breed in the USA. 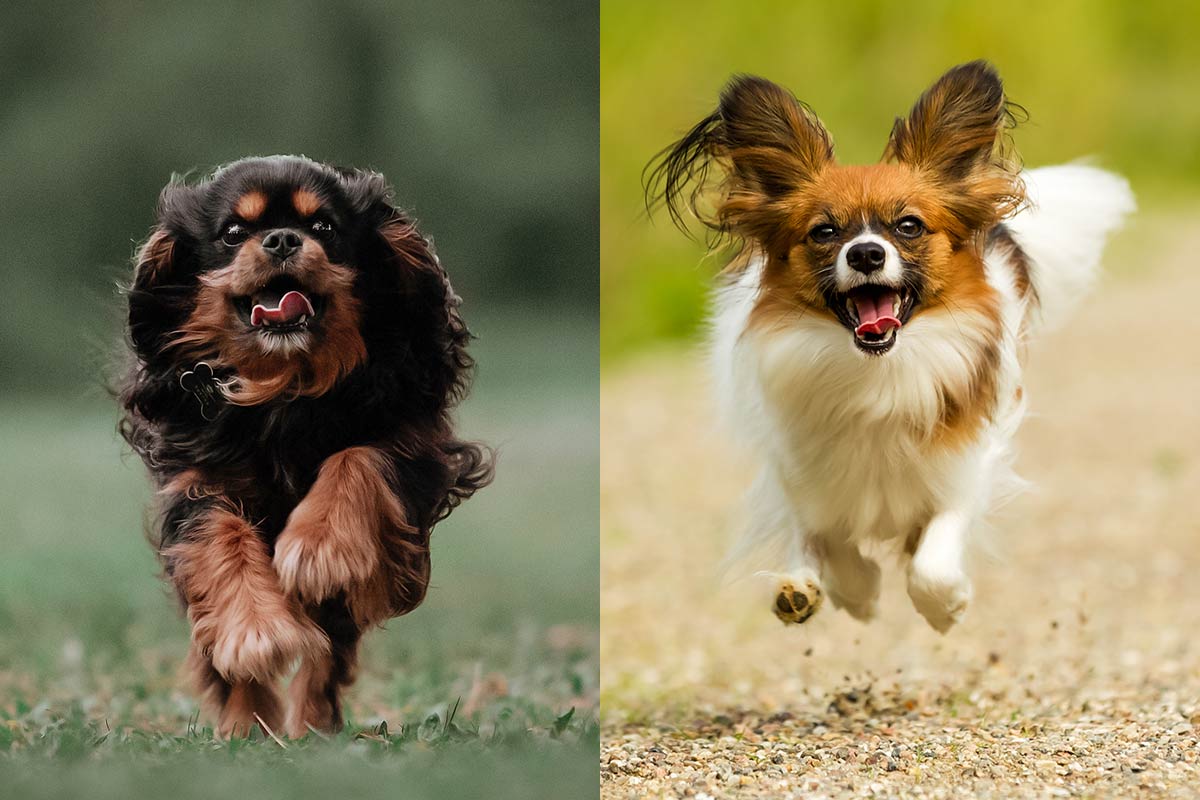 The Cavalier King Charles Spaniel has an average height of 12 to 13 inches and 13 to 18 pounds. The Papillon, on the other hand, is slightly smaller. They usually grow to a height range between 8 and 11 inches and can weigh between 5 and 10 pounds. 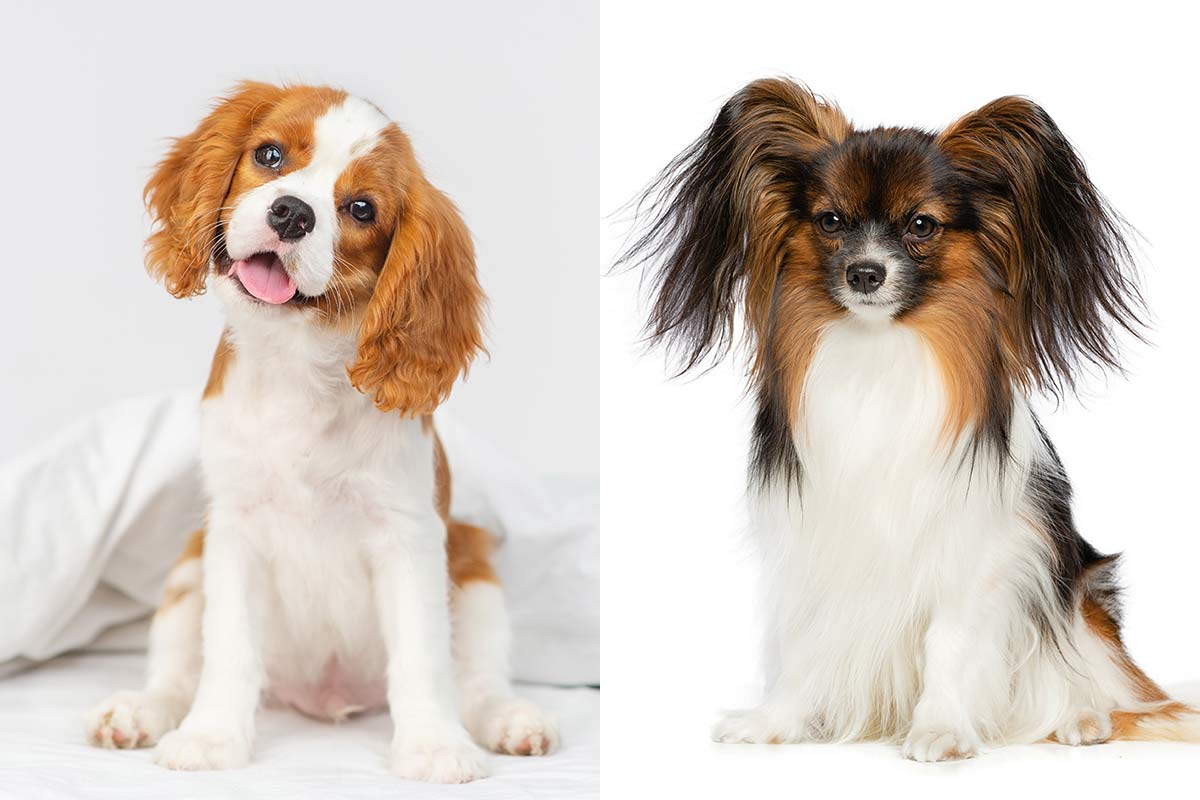 The Cavalier has an endearing appearance with the sweet expression and big, round eyes. They have a silky coat with a feathering on their ears, feet, legs and tail. They have four recognised coat colors: Blenheim, Black and Tan (also referred to as the King Charles), Ruby and Tricolor.

Here’s what the Cavalier breed standard has to say on appearance:

The Cavalier King Charles Spaniel is an active, graceful, well-balanced toy spaniel, very gay and free in action; fearless and sporting in character, yet at the same time gentle and affectionate. It is this typical gay temperament, combined with true elegance and royal appearance which are of paramount importance in the breed. Natural appearance with no trimming, sculpting or artificial alteration is essential to breed type.

The Papillon’s top identifying feature are their large, wing-shaped ears. However, Papillons can have erect ears which is referred to as the Phalene type or ears that hang down. They’re also recognizable for their plumed tails that folds over onto their back to give them their nickname, the Squirrel Spaniel.

Like the Cavalier, they’ve got a silky coat and have different coat color combinations. Papillons tend to be particolored or white with patches of color. Some of the combinations include black, lemon, red, sable against a white coat. There are some alternative options that don’t fall within the breed standard.

The Papillon is a small, friendly, elegant toy dog of fine-boned structure, light, dainty and of lively action; distinguished from other breeds by its beautiful butterfly-like ears. 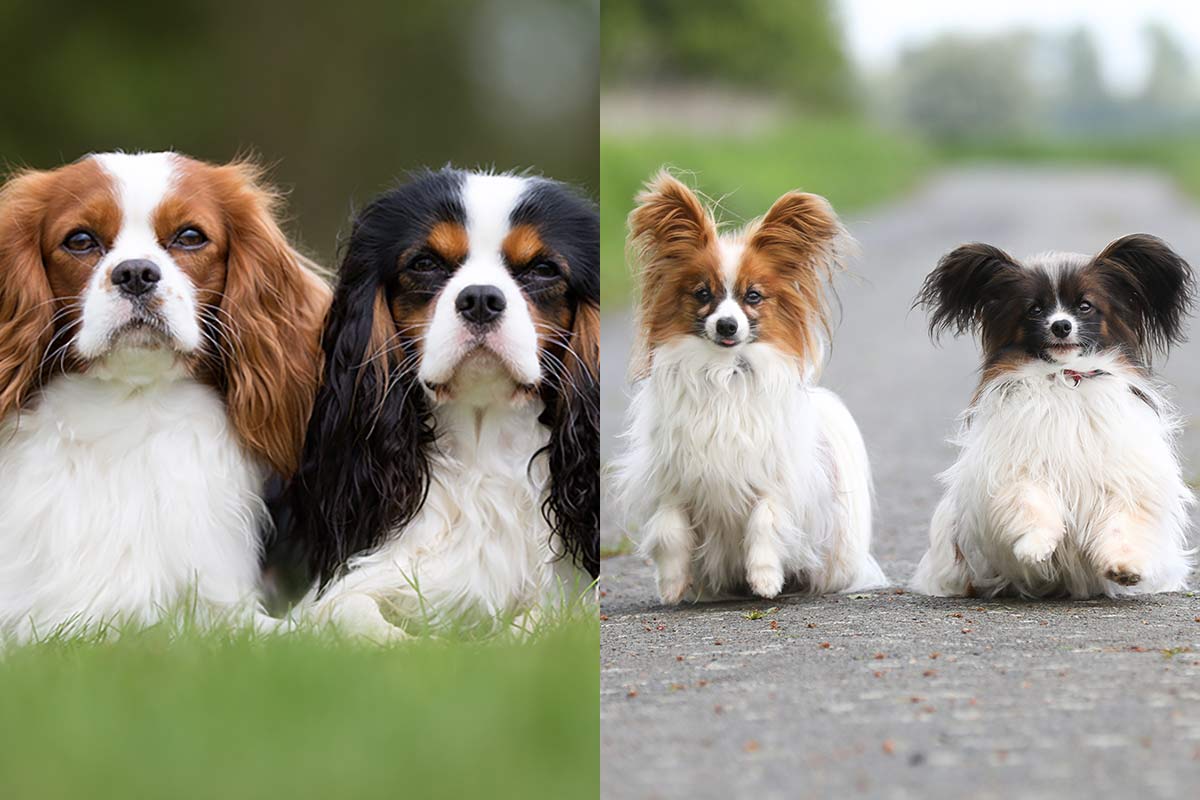 The Cavalier is an affectionate, friendly, playful and sociable dog breed – that’s why they can make excellent family pets. They love to play with their family but meet new people and new dogs on walks or at the dog park. Cavaliers aren’t particularly alert or loud dogs so they won’t be effective watchdogs. They’re considered a prime example of a lap dog as they’re content to cuddle up next to their owner on the sofa.

Papillons are alert, happy and friendly dogs that are outgoing when it comes to meeting strangers or other dogs. They tend to be confident dogs that like to think they’re in charge. Don’t underestimate these small dogs because they’re smart and trainable. While Papillons tend to be friendly, they still need lots of socialization to prevent aggressiveness or shyness. While they can excel in a family setting, children will need to be educated on how to interact and handle these small dogs. 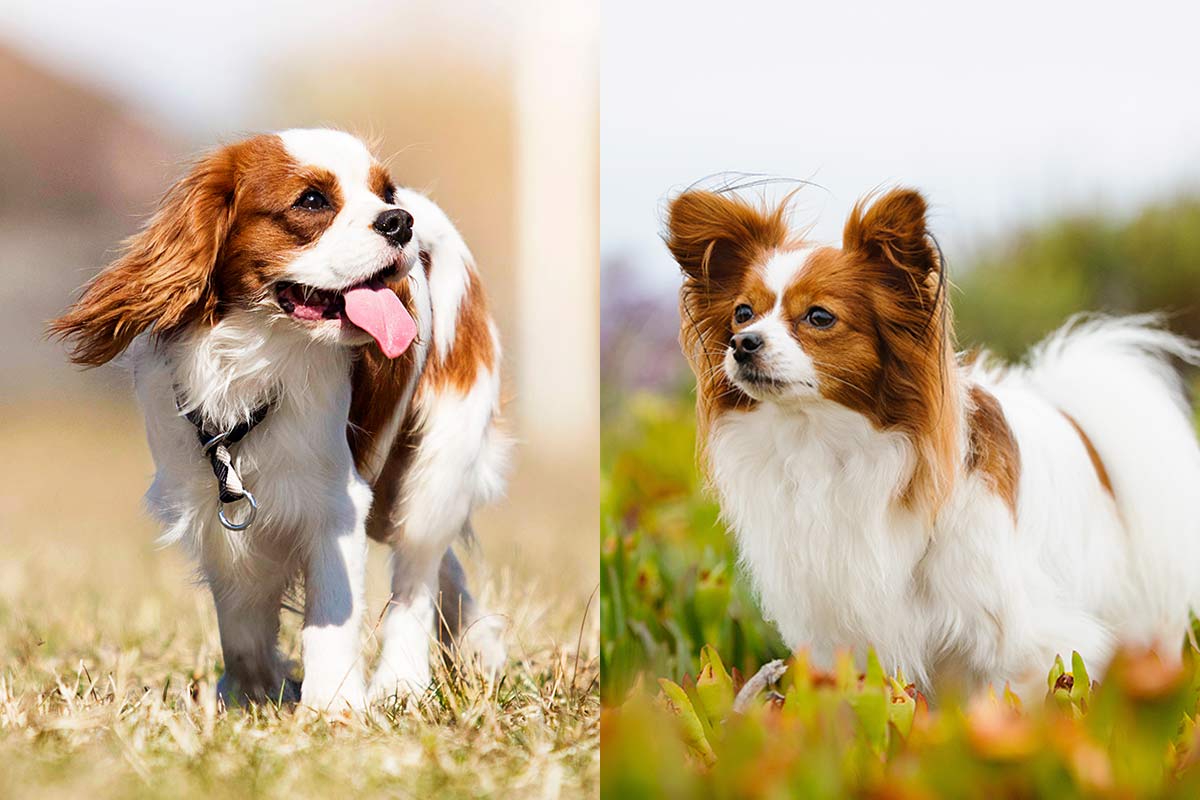 The Cavalier may enjoy spending time on your lap or snuggled next to you on the sofa, but they’re Spaniels so they’ll need daily exercise to stretch their legs. They’ll enjoy moderate exercise such as a daily walk, playtime at the dog park or a game of fetch in the garden. It’s a good idea to give your dog around 30 minutes of exercise a day. They’ve got a high prey drive so it may be a good idea to keep your Cavalier on a leash if they’re in an unsecured area.

While Papillons may be small, they’ll still need regular daily exercise. They’re active and smart so Papillons will benefit from a good amount of mental and physical stimulation. The AKC write that Papillons love a game of fetch. Like Cavaliers, Papillons tend to have a high prey drive so they shouldn’t be trusted off leash unless you’ve got complete confidence in their recall. As a general rule of thumb, your Papillon will need around 45 minutes of exercise a day.

Neither the Cavalier King Charles Spaniel nor the Papillon are hypoallergenic as both breeds shed. So if you’re looking for a low-shedding dog breed that’s less likely to trigger your allergies, you’ll need to keep looking! 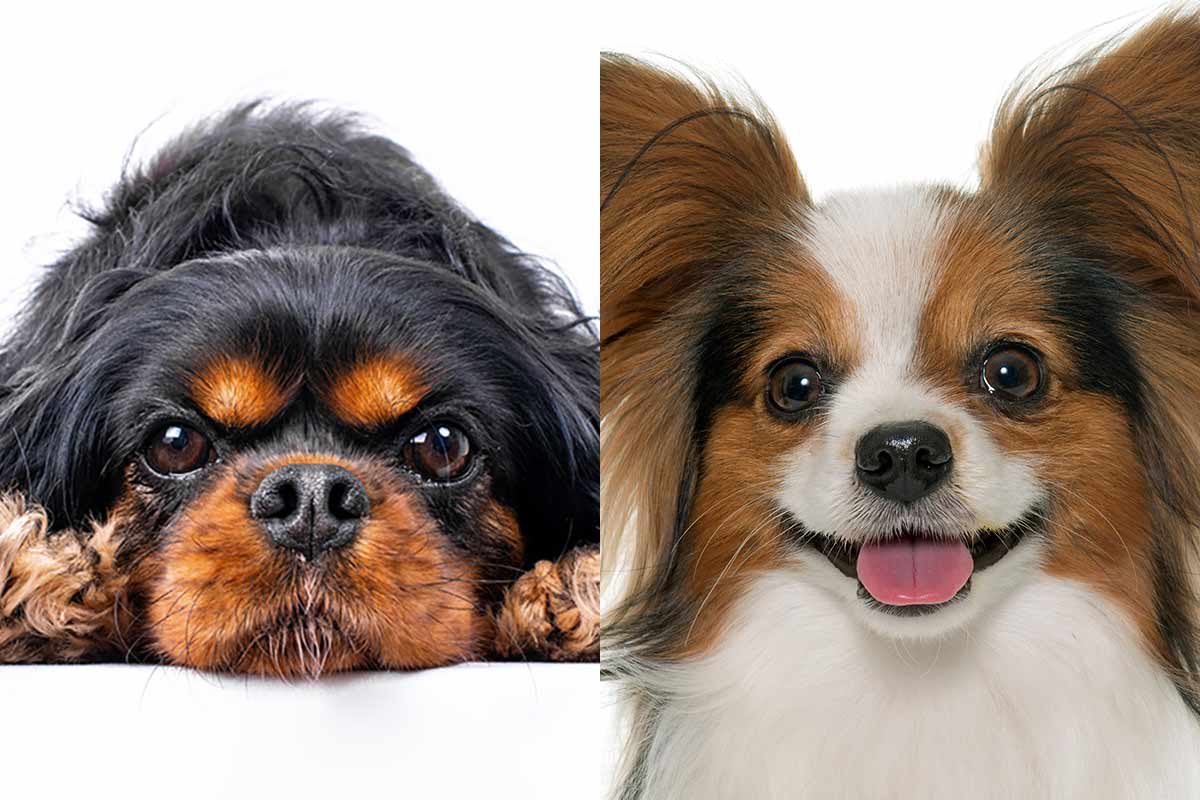 Cavaliers have a medium-length coat that is striking in appearance. They’re considered average shedders so they’ll require a brush a couple of times a week. They’re quite high maintenance when it comes to care because Cavalier owners will need to groom their feathering on their ears, feet and tail. It’s a good idea to regularly check their ears and eyes for possible issues, while they’ll need their teeth brushed a couple of times a month.

The Papillon breed tend to be moderate shedders with a versatile coat. They’ll need to be brushed once or twice a week. The Papillon have earned a reputation for not having a doggie odor but they’ll still need a bath every couple of months. Just like the Cavalier, you’ll need to check their ears, eyes and mouth for any potential issues. 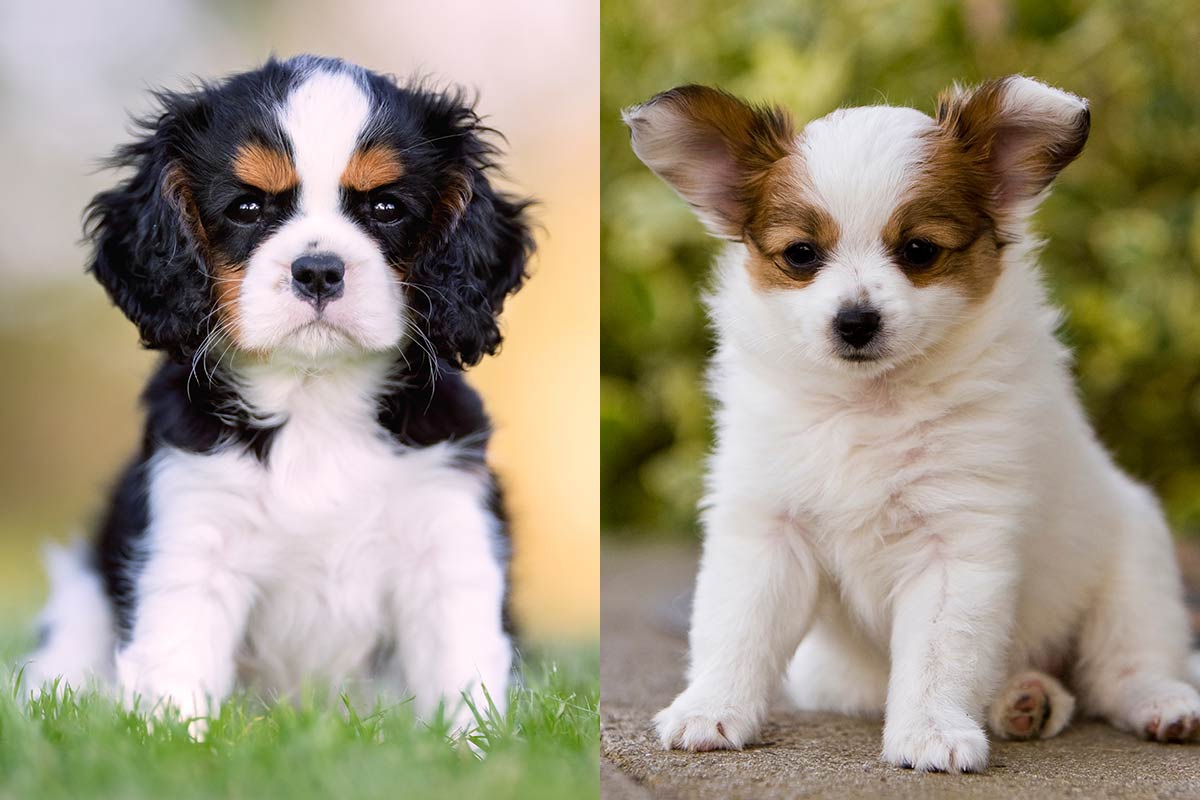 Cavaliers have an average lifespan of 12 to 15 years, while Papillon can live anywhere from 14 years up to 16 years.

The Difference Between Cavalier King Charles Spaniel And Papillon

The Cavalier King Charles Spaniel isn’t as alert as the Papillon so they don’t make good watch dogs. While the Papillon breed isn’t overly yappy, they’ll sound the alarm if someone is at the door or they see something outside the window. While they may look slightly similar in appearance, the Cavalier has just four possible coat patterns but the Papillon has numerous coat colors. Papillons are slightly cheaper than Cavaliers on average and they live slightly longer too.

The Similarities Between Cavalier King Charles Spaniel And Papillon

It’s fair to say that the Cavalier and Papillon have more similarities than differences. They were both popular dog breeds with aristocrats, noble people and royalty seeing as they were content to be lap warmers. They’re friendly and sociable with people and pets so they can make ideal family dogs. While neither have excessive exercise needs, they’ll still benefit from 30 to 45 minutes of exercise every day. Neither dog breed is hypoallergenic and they both shed so will require weekly grooming.

We’ve reached the end of our Cavalier King Charles Spaniel Vs Papillon feature.

It’s easy to see why both dog breeds have proven such popular family pets throughout the past few centuries.