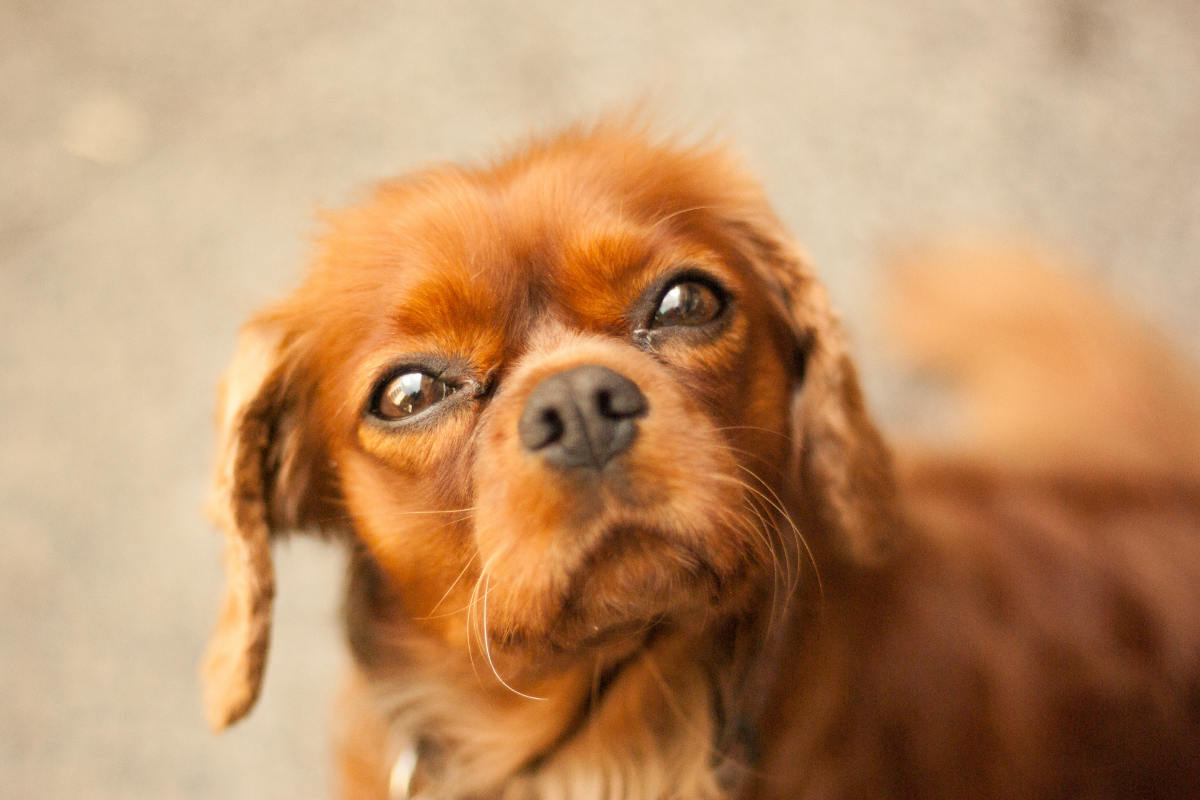 These toy dogs aim to please their dog owners and absolutely love the company of humans.

They’re the perfect family pet given their docile nature and low maintenance lifestyle.

But can you leave a Cavalier King Charles Spaniel at home alone?

Of course some Cavaliers do absolutely fine when their dog owner has to leave the house.

But the breed do have a reputation for suffering from bouts of separation anxiety in the absence of their human companions.

Symptoms of separation anxiety can include persistent barking, destructive chewing and even defecting in the home.

In this article, helloBARK! will take a close look at separation anxiety and how it can affect Cavalier King Charles Spaniels.

The ancestors of the Cavalier King Charles Spaniel first arrived in the United Kingdom around 15th century.

While Mary, Queen of Scots and Tudor monarch Mary I were both thought to be found of these toy spaniels, it was Charles I and Charles II who made the breed famous.

Indeed, Charles II was rarely seen without these dogs in his palaces up until his death in 1685.

The influx of Asian breeds such as the Pug and Japanese Chin altered the appearance of the King Charles Spaniel (otherwise known as England Toy Spaniel).

American Roswell Eldridge offered a cash reward for breeders who would produce the old style of toy spaniel famous under Charles II.

The Cavalier King Charles Spaniel is considered to be a calm and loving dog. They relish the company of humans and are considered the quintessential lapdogs.

The breed love nothing more than to curl up next to you on the couch for a cosy evening, while you can expect to have a permanent shadow as you move around the house.

Cavalier King Charles Spaniel require moderate exercise which makes them perfect for families or elderly people who can only provide short daily walks.

They don’t tend to bark, which doesn’t make them great watch dogs, but does make them ideal for apartment living if you’ve neighbours close by.

While being bonded to your dog can be a big positive, there are some downsides too.

What is separation anxiety?

For dog owners who have to leave the home a lot whether it be for work or for pleasure, you may have encountered the problem of separation anxiety.

Separation anxiety occurs when a dog becomes distressed or unsettled when left at home alone. This can manifest itself in a number of ways.

The symptoms of this condition can include persistent barking or whining, destroying items in the home, scratching at walls, doors and floors, destructively digging or attempting to escape from the crate, or room. In some situations, a dog may even defecate inside the home due high stress levels.

You may experience your pup showing signs of separation anxiety before you even leave the home.

While house manners and puppy manners classes can help, even dogs that are well trained can revert to symptoms of separation anxiety if they don’t like to be separated from the human or humans they’re bonded with.

The Cavalier King Charles Spaniel have a reputation for being a breed that can suffer badly from separation anxiety.

While their unconditional love and loyalty is certainly a positive most of the time, it can present problems when you have to leave your dog at home alone.

Given their deep affection for their dog owners, it’s understandable Cavalier King Charles Spaniel want to have a human’s company day and night.

As a result, the breed are considered to be one of the worst for displaying the symptoms of separation anxiety.

Your Cavalier King Charles Cavalier could start to panic that you won’t return when you leave the house and if you allow the condition to worsen, it can become a big problem.

Those with experience of the breed don’t recommend these dogs for anyone who will have to leave them for four hours of the day.

While that’s an important consideration if you’re thinking about getting a Cavalier King Charles Spaniel, even someone who spends most of their time at home will have to leave to do errands at some point.

So how can you tackle separation anxiety within this breed?

How to prevent separation anxiety

Consult your vet The best place to start is to schedule an appointment with your local vet. They may be able to offer some good advice on potential solutions to the problem. For extreme cases of separation anxiety, they may even prescribe medication to relax your dog. This is a temporary fix and not a long-term solution.

Hire an experienced dog trainer There are a host of experienced dog trainers with experience with this issue. A quick search on Google should provide some options. Such experts can educate dog owners on ways to prevent and reduce separation anxiety. Some dogs are quick to pick up on signs that you’re about to leave the home, which can prompt them to panic.

Dog camera One of the tools that we’ve found useful is a dog camera. Such a device usually comes with a two-way speaker system and HD camera so you can see and talk to your dog, as well as hear any noises it is making. Some sophisticated models will have movement and sound sensor that can send a push notification to your smartphone if there’s an issue at home. They can even have a treat dispenser or laser game to get your dog stimulated when left at home alone.

Aromatherapy While essential oils can help to ground humans, it can have the same affect on dogs. Some owners have found using a couple of drops of lavender or another oil in a diffuser can help to relax their pooch. helloBARK! strongly recommend consulting with an expert about the use of aromatherapy to tackle separation anxiety.

Leaving the television or radio on While this isn’t particularly scientific, leaving the radio or TV on can create background noise to soothe your dog.

Reward with treats Giving your dog a treat when you arrive home can help. In doing so, you’ll be creating a positive association with your departure from the house.

Consistency is key Whatever method you try, consistency is really important. Curing separation anxiety will take more than a couple of days. In our experience, we found leaving the house at the same time every day for the same duration over a month helped our dogs anticipate and get used to periods of separation.

If you’ve any questions or need more help with separation anxiety, helloBARK! recommends contacting your local vet or researching experienced dog trainers in the area who can give you professional advice.