In fact, there is no such thing as a completely hypoallergenic dog, but some breeds are better than others for owners who suffer with an allergy to dogs.

The odds are that you’ve encountered a Cavalier King Charles Spaniel at some point in your life.

They’re quick to learn new commands, tend to get along with other dogs and don’t bark a lot.

But one of the most common questions about the Cavalier King Charles Spaniel is whether they’re hypoallergenic or not.

In this article, helloBARK! is going to explain what hypoallergenic means, understand whether Cavalier King Charles Spaniel are hypoallergenic and what other breeds are good for allergy sufferers.

According to a report by the American College of Allergy, Asthma, and Immunology, as much as 10 per cent of the US population are allergic to dogs.

But first, let’s take a look at the origins of the ‘CKCS’.

A quick introduction to the Cavalier King Charles Spaniel 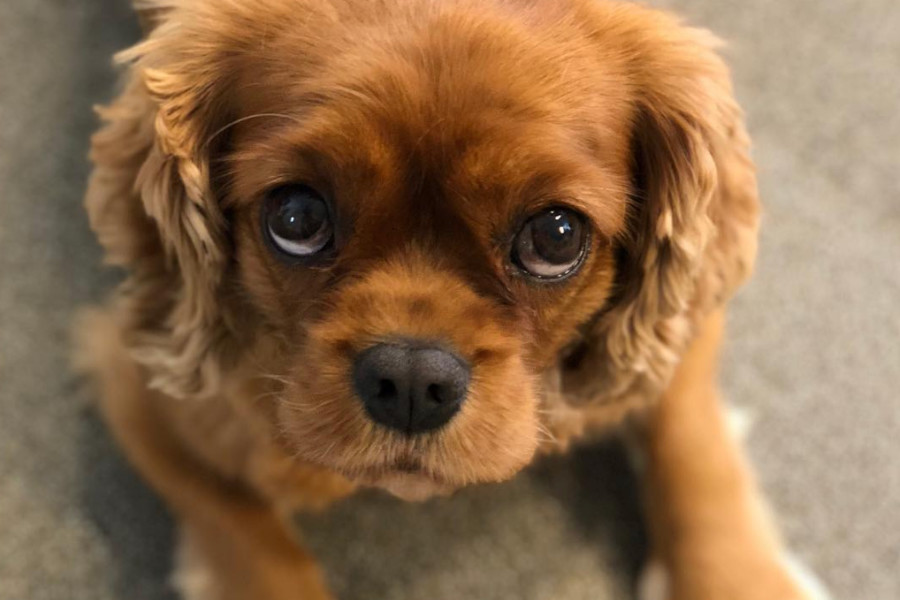 The history of the Cavalier King Charles Spaniel can be traced back to Scotland in the 15th century. The ancestors of this breed were thought to have been brought to Scotland from France.

Mary Queen of Scots introduced the dogs to England but it was the Stewarts who helped these toy spaniels to achieve popularity among nobility within the British Isles.

King Charles I and King Charles II were big fans of these dogs, who were often granted access all areas in their palaces.

Duke of Marlborough John Churchill had many chestnut and white King Charles Spaniels and because his residence was called Blenheim Palace, this variety were given the named Blenheim CKCS.

The influx of Asian breeds such as the Pug and Japanese Chin led to interbreeding. As a result, these spaniels started to develop stunted muzzles and domed head.

Hypoallergenic is referring to something that is less likely to trigger an allergic reaction.

You will often spot this term on skincare and make up, but it can also be used alongside dog breeds.

For people who are allergic to dogs, there is a possibility that some dog breeds could be better suited to people with allergies.

However, the American Kennel Club emphasise that there are no dog breeds that are 100 per cent hypoallergenic. They do list some types of dogs that are less likely to cause an allergic reaction – though.

The Cavalier King Charles Spaniel are not a hypoallergenic dog breed.

However, these dogs can be mixed with some other breeds to create a pup that is better suited to those with a dog allergy.

Often described as a designer breed, a Cavachon, which is a mix of Cavalier King Charles Spaniel and Bichon Frise, is thought to be better suited to those looking for a hypoallergenic dog.

helloBARK! recommends consulting with your local doctor and your local vet to learn more about coping with a dog allergy and what breeds may be suitable, if any.

Cavalier King Charles Spaniels do shed quite a bit. Regular brushing and grooming is recommended to maintain the quality and shine of their coat. It can help prevent the fur from becoming tangled and matted.

Given they can leave quite a bit of hair behind on clothes and furniture, this could be a problem for allergy sufferers.

The Cavalier King Charles Spaniel has a reputation (unfairly) for being a sometimes smelly dog. They can give off an odour if they haven’t been groomed. Their long coats can pick up bacteria and dirt.

If you do get a bad smell from a CKCS, it could also be bad breath or sign of an infection in their curly ears. It is a good idea to speak to your vet if you have any concerns about your Cavalier King Charles Spaniel’s odour.

So, what breeds are hypoallergenic dogs?

The American Kennel Club do recognise a number of breeds as better suited for people with allergies.

The AKC state on their website: “While there are no 100% hypoallergenic dogs, there are many breeds that do well with allergy sufferers. Dander, which is attached to pet hair, is what causes most pet allergies in humans and these dogs have a non-shedding coat that produces less dander.”

Affenpinchser – is a terrier-like toy Pinscher breed of dog. These German dogs were bred to be companion dogs.

Afghan Hound – has a thick, fine, silky coat. It is bred to do well in the mountains of Afghanistan.

American Hairless Terrier – is a breed that has full UKC recognition. It is a rare breed, and as the name suggests, without any hair.

Barbet – is a medium-sized French water dog. Their coat can grow quite long so regular grooming is required to prevent the fur becoming tangled.

Bedlington Terrier – Hailing from a small town called Bedlington, Northumberland in England, this dog is often likened to a lamb.

Bichon Frise – has its origins in Spain. It has a medium length coat that is silky in texture and has corkscrew curls.

Bolognese – is a rare Italian dog that comes from Bologna. It has no undercoat.

Chinese Crested – is another hairless breed of dog, although it can come with and without fur.

Coton de Tulear – has a coat that is often likened to cotton. It tends to grow medium-to-long in length.

Giant Schnauzer – have a coat that is dense and wiry. Their fur is weather resistant. The coat can give these dogs a distinct “beard” and “eyebrows”.

Irish Water Spaniel – is one of the largest and oldest spaniels. Their coat has dense curls and doesn’t shed.

Kerry Blue Terrier – is best known for it’s unique coat. It is soft and wavy – and crucially, it doesn’t have an undercoat.

Lagotto Romagnolo – is a pooch from Italy, with the name directly translating as the “lake dog from Romagna”. It has a thick, waterproof double coat of hair rather than fur and should be groomed on a regular basis.

Maltese – is a dog whose heritage comes from Malta. The coat is long and silky and lacks an undercoat.

Peruvian Inca Orchid – is another hairless dog. Hailing from Peru, they usually don’t cause a typical allergic reaction because they lack the normal dog dander.

Poodle – is one of the most intelligent dogs in the world. It is also a breed that is good for people with an allergy to dogs. Poodles have a predictable coat that doesn’t have the normal dog dander, like the Peruvian Inca Orchid.

Portuguese Water Dog – have a coat that doesn’t shed. There’s no undercoat, either.

Soft Coated Wheaten Terrier – originally bred in the Republic of Ireland, these dogs have soft, silky hair that does not shed. Instead, their hair just keeps growing, which will require trimming.

Schnauzer – have a double coat but tend to shed less than other dog breeds.

Xoloitzcuintli – is a hairless breed of dog that is known in the English language as the Mexican hairless dog. They are born either hairless or with a very thin coat.