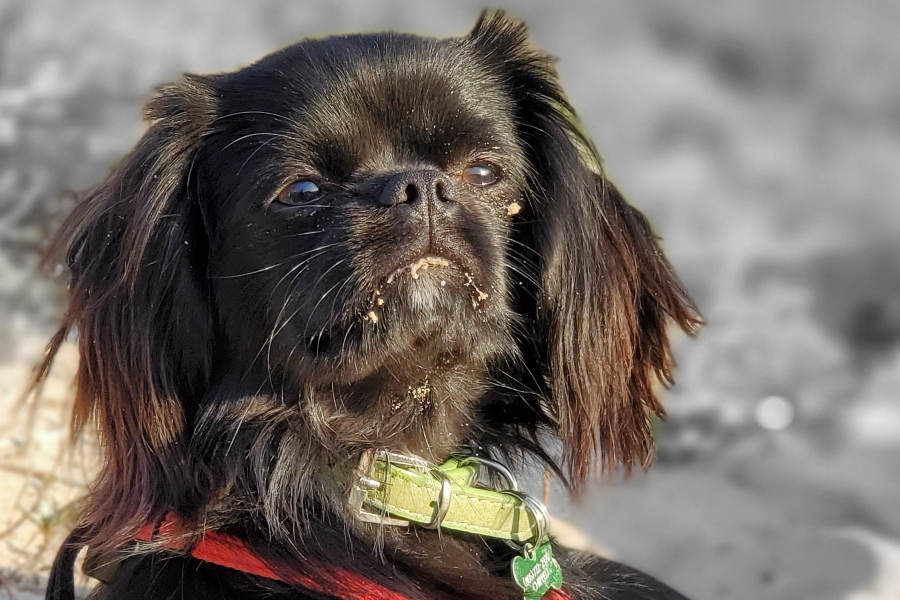 A Cava-chin is a cross between a Cavalier King Charles Spaniel and a Japanese Chin.

The Cavalier King Charles Spaniel is a companion-sized dog breed that enjoy the company of their pet parents.

Japanese Chin is often compared to cats due to their fastidious and gracious little dogs.

While it’s unclear when the Cava-chin designer breed first appeared, you can find some examples of this cross at rescue shelters.

In this article, we’re going to delve into the world of Cava-chin to give you a clear idea about these little dogs.

We’ll touch upon a number of different subjects, such as Cava-chin appearance, Cava-chin temperament, Cava-chin exercise, Cava-chin grooming and much more.

A number of Cava-chin owners will contribute their insights to the feature. We’ll hear from Miki (@miki_cavachin) and Tinkerbell (@tinkerbell_the_spaniel). 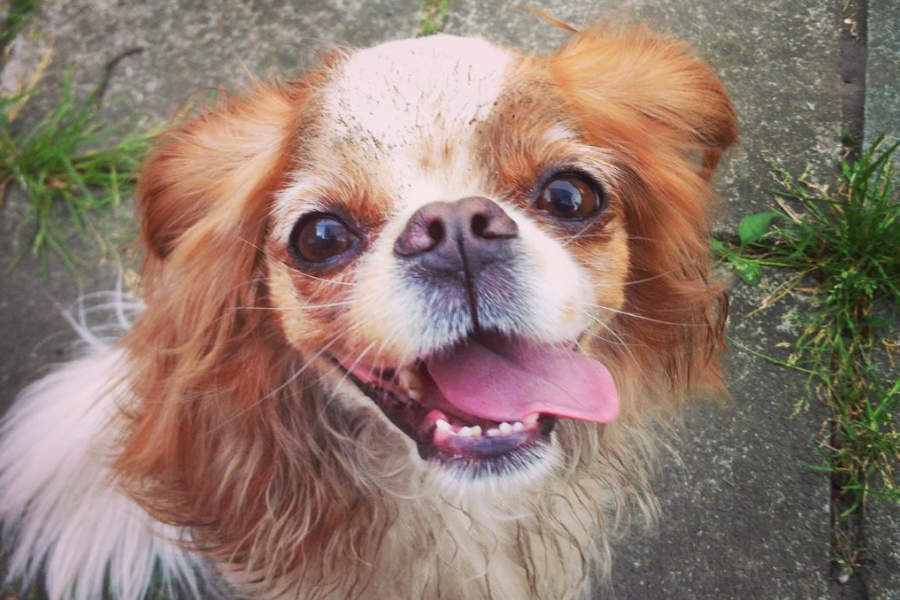 Cava-chin is a cross between a Cavalier King Charles Spaniel and a Japanese Chin. They’re usually a popular cross breed thanks to their easy-going, laidback personalities.

This designer dog can go by a number of different names, including the Cavalier Japanese chin mix.

While the American Kennel Club recognize the Cavalier King Charles Spaniel and the Japanese Chinn, the organization haven’t granted the Cava-chin status.

Cava-chin are a small dog breed that make excellent companion dogs. They remain quite petite so they won’t get bigger than 8 to 12 inches tall and 14 to 18 pounds in weight. 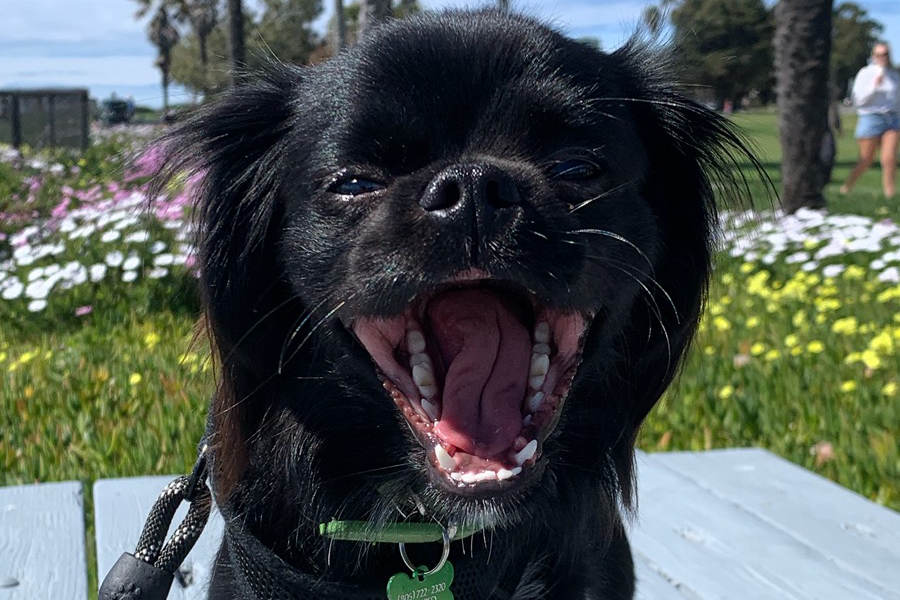 Cava-chin will vary in appearance depending on whether the Cava-chin takes after their Cavalier King Charles Spaniel and Japanese Chin parent. Cava-chin white, brown, red, fawn or black markings. They’ve usually got a coat that is medium to long in length. Their hair could take on a curly or wavy appearance.

The Japanese Chin have a face that is larger and wider than the Cavalier. They’ve usually got big, wide eyes and a short muzzle, akin to many Asians breed. They can also have feathered ears.

We asked Mia to describe the appearance of her Cava-chin, Miki.

Miki has traits that resemble both the Cavalier King Charles Spaniel and Japanese Chin. His long legs and posture are very much like the Cavalier. He also has lovely auburn highlights, colors that are seen in both Cavaliers and Chins. Like the Japanese Chin his face is slightly flattened with his nose and eyes in alignment, he has feathered ears and wide set eyes. Many Cava-chins have facial markings resembling the Japanese Chin, however Miki is almost all black.

A Cava-chin is a brachycephalic dog, his ears are smaller then the ears of a Cavalier King Charles Spaniels but a bit bigger then that of a Chin. He has the hair grow of a Japanese Chin. Long skinny legs with fluffy paws, his weight is right between what a chin weighs and what a cavalier weighs. He has very big eyes but they are not bulgy, they’re a delight to stare in.

The Cava-chin temperament will be a mix between the Cavalier King Charles Spaniels and the Japanese Chin. The Asian breed is described by the AKC as a “charming toy companion”. They add that the Japanese Chin is usually “an amusing lapdog is fastidious, graceful and generally quiet”. Cavaliers are often described as the quintessential lapdog. The Cava-chin will become attached to their dog owners, eager to please and acting like a velcro dog. Their friendly and pleasant attitude can make them a great option for first-time dog owners.

Tinkerbell is a sweet family dog, according to his owner Adriana.

He lives in his own world a lot, if you let him be, he will be very happy and thankful. He is a family dog that means that if he includes you in his pack he is very, very sweet, but he doesn’t like outsiders. He can growl to people he doesn’t like and tell them not to touch him, he chooses who touches him. To his master he is always in a good mood and willing to please and play.

Mia underlines the suggestion that the Cava-chin are the cats of the dog world.

Like Japanese Chins, Miki can be very cat-like. He is independent, very intelligent and very content doing his own thing. However, he loves to snuggle and be affectionate towards his family and other dogs. He’s very relaxed and only barks when he feels there is a threat.

Do Cava-chins suffer from separation anxiety? 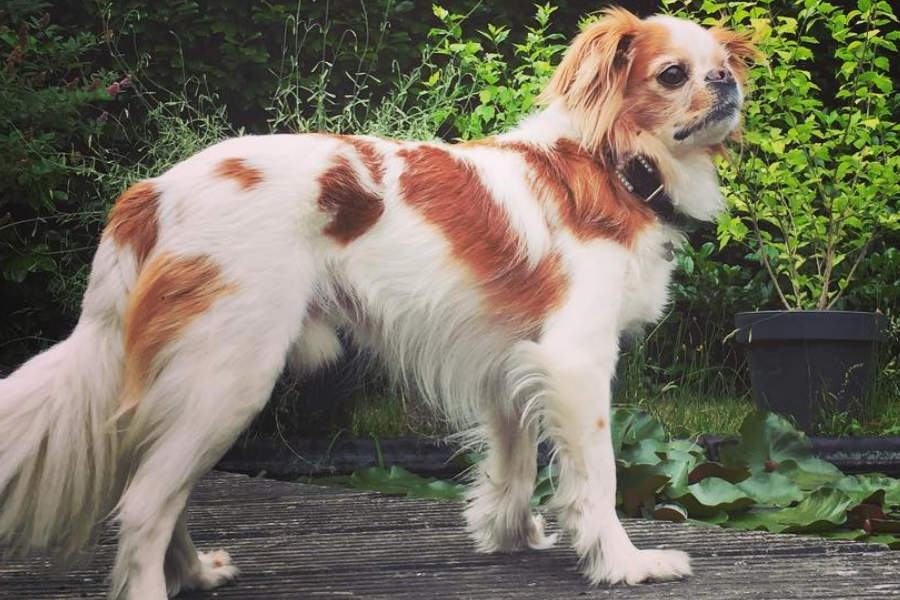 Separation anxiety is a chronic canine disorder that can affect dogs when they’re left at home alone. They can affect any dog irrespective of breed or mix. This canine condition can manifest itself when the dog is left at home alone. The result is often incessant barking, howling or whining, destructive chewing and digging, or in some extreme cases, defecating and urinating.

When we asked Mia if Miki has experienced this issue, this was her response.

Miki loves the company of his family and other dogs, especially his friend @JordyAussie. Although Miki can manage being on his own, he does not love being home alone. Much like the Cavalier King Charles Spaniel, Cava-chins do well with other animal companions when left alone in the home.

Adriana adds that Tinkerbell does suffer from separation anxiety.

He doesn’t like to be alone when he was younger he used to howl when left alone, but luckily he is small enough to take with you or bring to a sitter.

Cava-chins are friendly dogs that can make excellent family pets. They can quickly become attached to their fellow members of the household. Having said that, you should educate children on how to handle these little dogs. They can be quite fragile so perhaps coexisting with young children who could be rough with this petite designer breed isn’t a good idea.

Here’s some advice from Adriana about the idea of pairing the Cava-chin with small children.

Because they are fragile, I wouldn’t place them with little children.

Are Cava-chins easy to train? 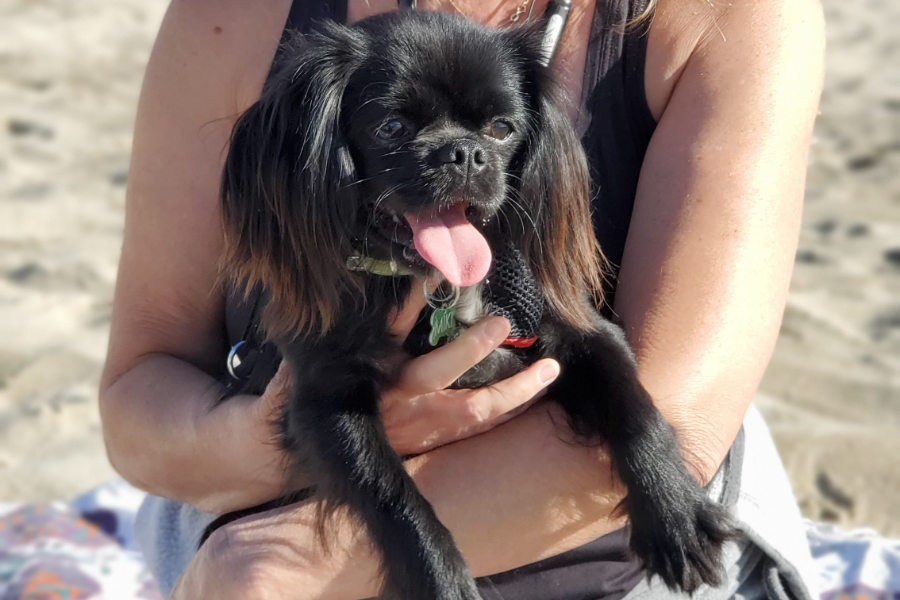 Neither the Cavalier nor the Japanese Chin are considered smart dogs, according to Stanley Coren’s Intelligence of Dogs. The Cavalier is ranked at number 73 and the Japanese Chin is further down the list at number 118. Cava-chin are relatively easy to train given they like to please their dog owners. Having said that, you’ll want to put in the ground rules from a young age to ensure you’ve got a well rounded pup. While they can have a stubborn streak, you can still be quite easy to train because they want to please their dog owners.

How much exercise do Cava-chins need?

Cava-chin don’t have huge exercise needs given they’re considered lapdogs. Wag Walking suggest around 30 minutes of exercise a day so a couple of short walks will suffice. As a result, Cava-chin are a good choice for potential pet owners who don’t have the ability or time to exercise their dogs.

Mia gave us an insight into Miki’s exercise needs.

Miki likes to be active, he loves to go on walks and play, but at the end of the day he’s always happy to curl up on the couch and watch TV with the family. He loves relaxing

at the beach with his family and sitting in mom’s lap.

As we’ve mentioned already, Cava-chin are a companion cross breed that like to give and receive affection from their owners. So, if you want a dog that will enjoy some downtime with you, the Cava-chin is a great option.

Adriana loves some downtime with her Cava-chin, Tinkerbell.

Every where we go he sits on my lap, he isn’t nervous at all, as long as he can be close to me he is happy. He is a very good boy at the vet office as well, he will sit on my lap while the other dogs will bark and howl around him. Sometimes he turns around to watch me and give me a little kiss and then turns around to watch the action from the safety of my lap. 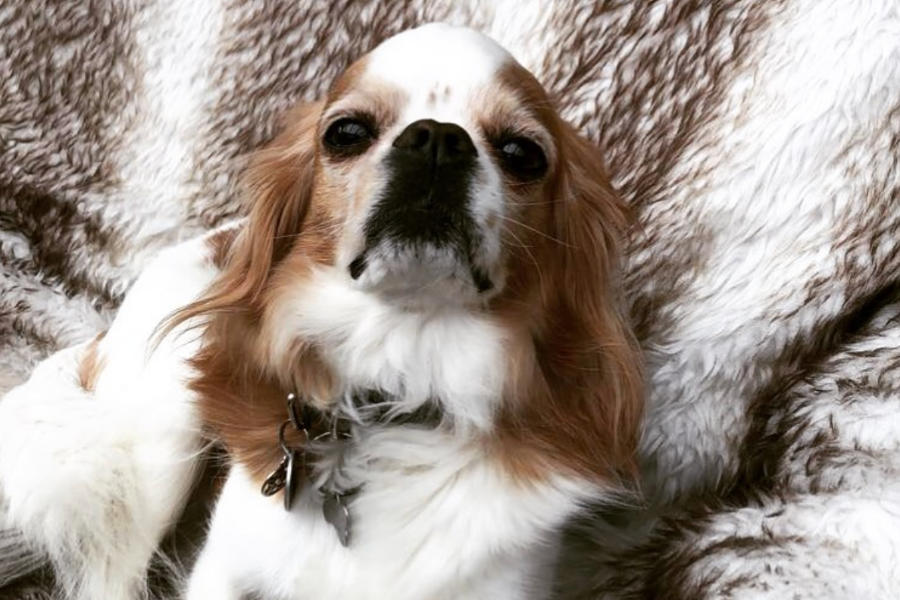 These mixed dogs do shed given both the Cavalier and the Japanese Chin are breeds that shed. Having said that, the Cava-chin doesn’t shed quite as much as their Cavalier parent. They’ll go through a shedding season when they blow out their coat.

If you decide that a Cava-chin is the cross breed for you, you’ll need to be prepared for a regular grooming schedule. They’ll require a weekly brush to remove dead hair and debris. In doing so, you can prevent their coat becoming a matted or tangled.

Adriana provided an insight into her grooming routine with Tinkerbell.

They only need a brush around the ears and tail once a week.

Similarly, Mia doesn’t believe Cava-chin are the most demanding of breeds where grooming is concerned.

Cava-chins do not require too much maintenance. Miki is brushed once a week and gets a bath once a month, so his coat does not dry out. Cava-chins can shed, but it is very minimal. Overall, they are a very easy to maintain.

Do Cava-chins have any health problems? 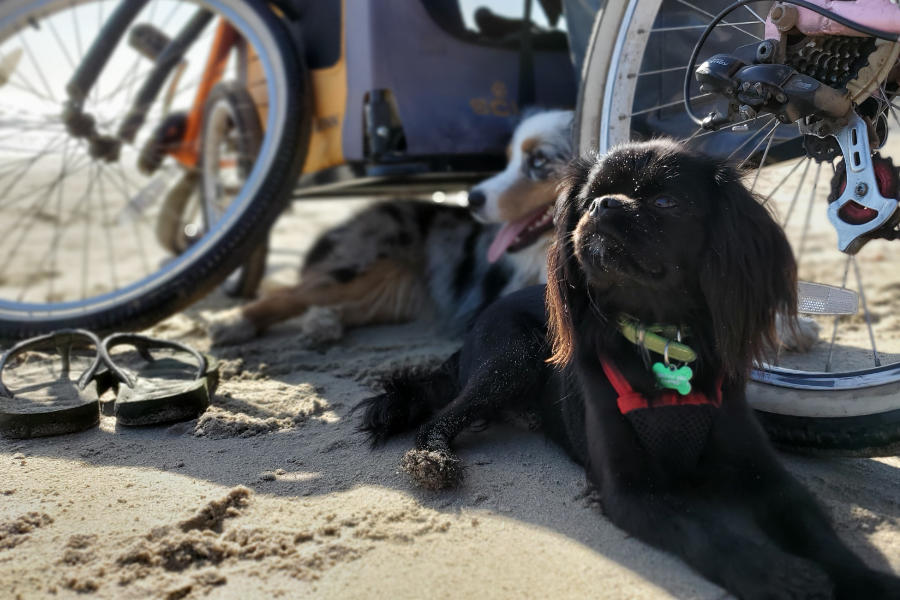 Cross breeds are generally seen as healthier dogs than purebred canines. Having said that, Cava-chin can be prone to some health problems. Here are some conditions that you should watch out for.

If you’ve got your heart set on a Cava-chin, you’re first stop should be your local rescue shelter. This is a mix that can often be found up for adoption. It’s unlikely that there’s a dedicated breeder of a Cava-chin given this is still a relatively uncommon mix unlike other popular cross breeds such as Cockapoo or Cavapoo.

If you do find a breeder, you ensure that they’re ethical and responsible. So make sure that you can see the puppy interact with its parents, ask to see proof of health certificates and veterinary checks as well as speak to other pet parents who have adopted from the breeder.

We recommend avoiding buying a dog from a pet store, third party or generic online websites.

Mia shed some light on how she ended up with Miki.

He was rescued from a puppy mill in Ohio in January and was adopted through the Cavalier Crazy Rescue (@cavaliercrazyrescueutah) based in Midvale, Utah. 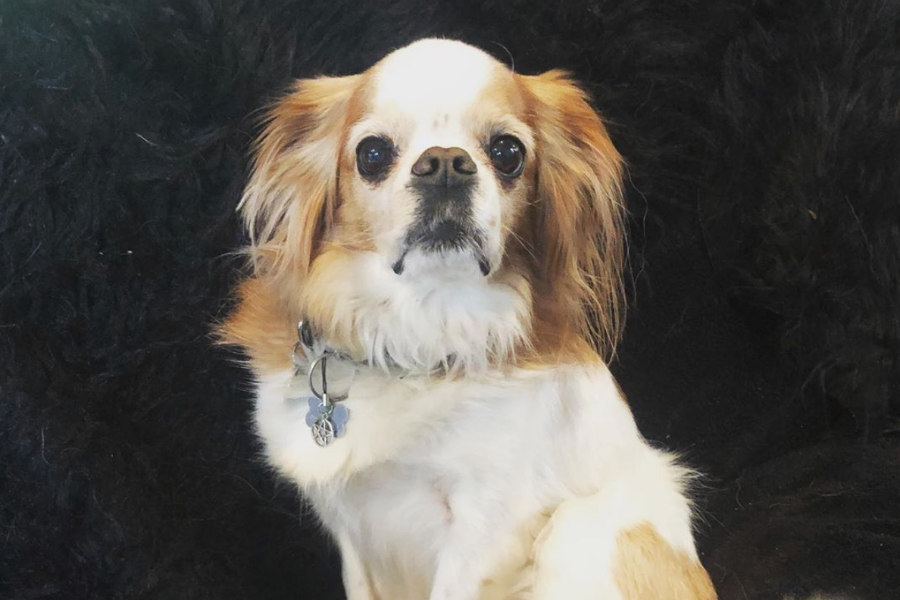 While you may have saved enough money to pay for your Cava-chin puppy, you’ll need to consider other costs that will arise on a monthly or yearly basis. Some of the extra costs can include dog food, pet insurance, grooming, vet checks and operations. You can check out the best pet insurance options in the USA and the UK

We find that checking out examples of the breed on Instagram can be an excellent way to learn more about the mix. Here are some Cava-chins that we recommend following on Instagram: 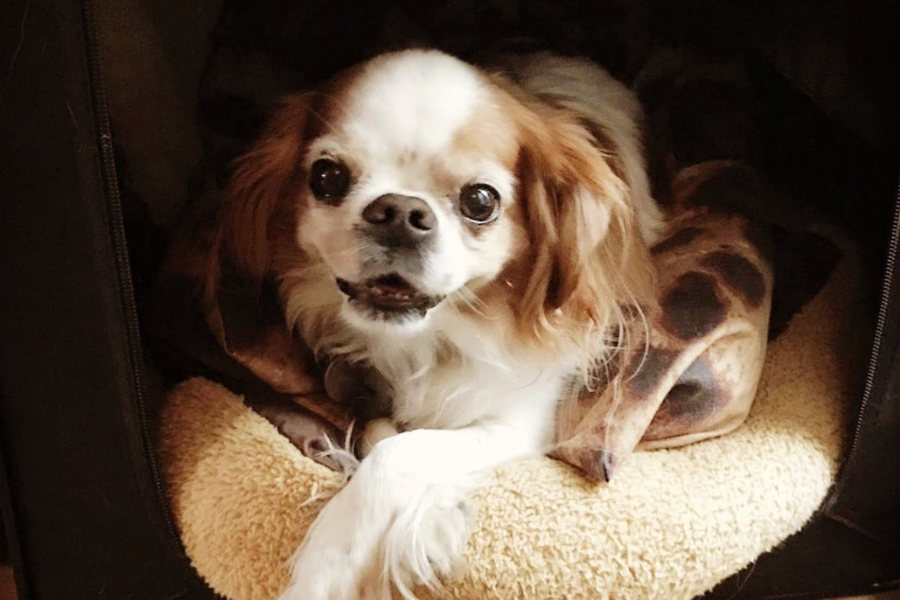 We’ve reached the end of our feature on Cava-chin.

They’re a friendly cross breed that combine features of both the Cavalier King Charles Spaniel and the Japanese Chin.

Cava-chin are small dogs that like to receive love from their dog owners, becoming very attached to their pet parents.

Given their low exercise needs, they could be a good option for older dog lovers looking for a low maintenance dog.