Brussels Griffon are a very recognisable dog breed thanks to their striking appearance.

As their name suggests, these small companion-sized dogs hail from Brussels in Belgium.

Nowadays, the Brussels Griffon is amongst the most popular dog breeds in the world, especially for dog lovers living in an urban setting.

With an average lifespan ranging from 10 to 15 years, these small dogs really do make much-loved canine companions.

In this article, we’re going to take a look at some of the pros and cons of the Brussels Griffon breed.

Brussels Griffons may be small but strangers beware, this Belgian breed make good watch dogs. They will be quick to alert their owners to strangers approaching their homes, animals playing in the yard outside or any unknown source of noise. While this is great for pet owners who like to be alerted to any visitors – wanted or unwanted, it could become a problem if your neighbors have sensitive ears.

This Belgian breed tend to do well with their fellow Brussels Griffons or other dogs in general. It is thought that at least four breeds were used to create these pint-sized pooches, including black Pugs, King Charles Spaniels, the Ruby Toy Spaniel and the Affenpinscher. Given the number of different breeds that were used to create these snub-nosed dogs, it isn’t surprising that they are usually sociable dogs, whether it be at home or at the dog park. They do well with cats, too, although it is best to introduce cats and dogs at a young age to have the best possible chance of success. Given these dogs were used to hunt rats and other vermin in Belgian stables in 1800s, it is something to consider if you have small pets at home.

These dogs have proven a big hit thanks to their human-like expressions. While their squishy faces give them a permanent look of disdain, they can do a range of different emotions. They have a jaw similar to a pug, a little squished nose and bulging eyes to give them an unforgettable face. They love human company and will follow their owner around the apartment or house.

The breed sport trademark beards which results in a lot of attention when out and about. They tend to be bushy and quite long. It’s one of the Brussels Griffon’s unique selling points, although it does require a lot of care. It is recommended that you regularly groom their beard to avoid them having a rather unpleasant smell.

Brussels Griffon really come into their own around Halloween on Instagram. The rough coat Brussels Griffon can look like small little stuffed teddy bears. However, the breed is perhaps best known for their similarity in appearance to a famous Star Wars characters. That’s right, Brussels Griffon are miniature sized Chewbacca. It has even led to this breed being called the Chewbacca dog. Of course, we would never recommend adopting a dog just for the sole purpose of Halloween. You should do thorough research to make sure this is the right breed for you. 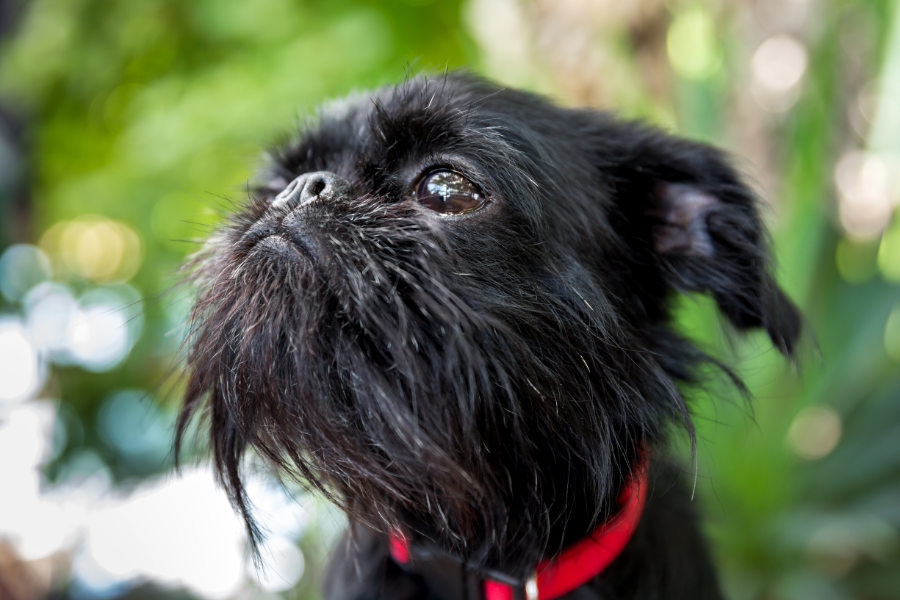 Demand a lot of love

These dogs require a lot of affection. Brussels Griffon can be very demanding of their owner’s time, so you want to make sure you can devote energy and love to this dog. They are eager to please, which makes them great companions. They don’t do well with forceful commands as they are sensitive dogs. Furthermore, prospective owners with small children should think twice before bringing a Brussels Griffon home given their sensitive nature.

There are two different types of Brussels Griffons. The smooth coat hair are relatively easy to take care of, but the rough coat require a lot of grooming. These dogs need a lot of brushing, usually two to three times a week. This helps to get rid of dead and loose hairs. Doing this is important to not only maintain your Brussels Griffon’s coat, but also to help prevent the build up of hair around your apartment or house. Some owners of the rough coat Brussels Griffon will do hand stripping, which is important if you plan to show your pooch at shows and competition.

These beautiful Belgian dogs can be quite stubborn if they don’t get the necessary obedience training. They have been known to run the household if given the opportunity. Brussels Griffon can have a mind of their own, which can prove problematic for owners of this breed. This can manifest itself in the shape of barking, which can annoy neighbors who are sensitive to noise pollution.

Brussels Griffon remain quite a rare breed by modern standards. These small dogs, whose first purpose was to hunt rats in stables for coachmen in Belgium, were left on the brink of extinction following World War I and World War II. However, breeders in the United Kingdom helped to manage and protect these adorable Belgian pooches. According to a report, the Brussels Griffon is the 99th most popular dog in the world (out of 184 AKC-recognized breeds). However, their numbers are sure to increase given their popularity on social media. Oscar-winning film As Good As It Gets helped the breed to secure fame when a Brussels Griffon called Verdell starred alongside Jack Nicholson. These dogs can cost a pretty penny, with breeders charging anywhere between $800 and $4,000 for a Brussels Griffon puppy.

Brussels Griffon have a number of different potential health problems. They do have a reputation for being quite a fragile breed but that’s not purely down to their size. They are susceptible to fracture, concussions and being attacked by larger dogs. Another consideration are their cute little faces. While they might photo well, these dogs can suffer from respiratory problems. One such condition is Brachycephalic Syndrome, which can affect dogs with a smaller muzzle and nose, which means their throat and breathing passages are undersized or flattened. Other respiratory issues such as an elongated soft palate, stenotic nares (deformed nostrils) or Everted Laryngeal Saccules (blockage of the wind pipe) could be potential problems. Brussels Griffon owners might have a difficult time travelling with their dogs on planes given they are a snub-nosed breed. It is good practice to double check with the airline you’ll be using to make sure they accept these breeds.

20 Reasons Why You Need A Corgi