A Boxksy is a cross between a Boxer and a Siberian Husky.

A Boxer Husky mix is usually an athletic and muscular dog with striking eyes, particularly if they inherit blue eyes from their Husky parent.

Often shortened to Boxsky, a Boxer Husky mix will have traits reflective of both their parents.

However, there’s no guarantee a Boxsky will inherit certain desired physical feature or personality traits from one particular parent.

Boxsky can often be the result of unplanned breeding rather than a breeder regularly producing Boxer Husky mix puppies.

If you’re interested in this cross breed, we’ve spoken to some Boxsky owners to learn more about the mix.

This article will be split up into the following sections:

As we touched upon above, a Boxsky is a cross between a Boxer and a Siberian Husky. It’s a relatively uncommon cross breed unlike some popular hybrids such as Labradoodles and Goldendoodles.

Odds are you’ve never encountered a Boxsky in person – or perhaps you have without realising. They’re unlikely to bred purposefully given they don’t have hypoallergenic qualities.

You can refer to this cross breed simply as a Boxer Husky mix. However, the name can be abbreviated to Boxsky.

There are other names that are used to describe these striking dogs, including Bosky and Husker.

Where do Boxsky come from?

The American Kennel Club write on their website that Boxers are the 11th most popular dogs in the USA.

The Boxer breed can trace its origins back to 19th century Germany. They’re thought to be distant relatives of Mastiffs and the now extinct Bullenbeisser breed.

Siberian Huskies have been used as sled dogs going back centuries. Their ancestors ran with nomadic people in Russia, while the modern Siberian Husky featured heavily in the Gold Rush.

They’re not quite as popular Boxer but rank a respectable 14th in the AKC’s rankings. Siberian Huskies are athletic dogs that require a lot of mental and physical stimulation.

They’re usually friendly and outgoing with their family members and strangers. Siberian Huskies don’t usually do well when left alone for long periods of time.

To get an idea of Boxsky size, we need to take a look at the average size of Boxers and Siberian Huskies. Boxers usually have a height ranging from 21.5 and 22 inches. They can weigh in at around 65 to 80 pounds. Siberian Huskies tend to be a little lighter than their Boxer counterparts, with a height of 20 to 23.5 inches and weight from 35 to 60 pounds.

It’s difficult to predict the size of a Boxsky given a puppy could inherit traits from both parents. Therefore, we can say with some degree of certainty that a Boxsky’s size range should usually be from 20 to 23.5 inches, while they could weigh anywhere from 35 to 80 pounds.

Again, we can’t predict a Boxer Husky mix’s exact coat color in advance. However, we can look at the possible variations given both the coat colors of Boxers and Siberian Huskies.

They can have a variety of coat colors, including white, black and fawn. There’s also the possibility for a fawn or brindle coat. These are all colors found in the Boxer breed. Siberian Huskies usually have black and white, gray and white or red and white coats.

The sled dogs can have blue eyes, brown eyes, bi-eyes or parti-eye. So another feature of Boxsky dogs could be blue eyes or bi-eyes.

As a relatively new cross breed, you may have limited experience meeting or even seeing a Boxsky online. We’ve reached out to number of Boxsky owners to find out more about these mixed dogs.

So without further ado, let’s take a look at some examples of these beautiful cross breeds.

Frankie is a super sweet super cuddly dog. She can be very protective of her pack. Which at times has led to reactive moments. For the most part she loves dogs and people. Her favorite breed of dogs are huskies and boxers. Dogs that seem to get her I just want to run fast and wrestle hard play style. She’s incredibly goofy. Her favorite thing to do is run and then dive to the ground and roll around for a bit.

Frankie definitely had traits of both breeds. She loves to mush. Running and pulling are some of her favorite things to do. She can be super stubborn. But at the same time she has a lot of people pleasing qualities that come from her boxer breed. She is not food motivated at all. So her stubbornness has made training her. A constant work in progress to put it nicely. Or a struggle to put it not as nicely.

I didn’t really know anything about the mix. I don’t think it was really a thing like it is now. In fact when I searched for the mix when i first got Frankie there were barely any photos. I got Frankie because a local family had an accidental litter and I saw a post about it and had to check it out. 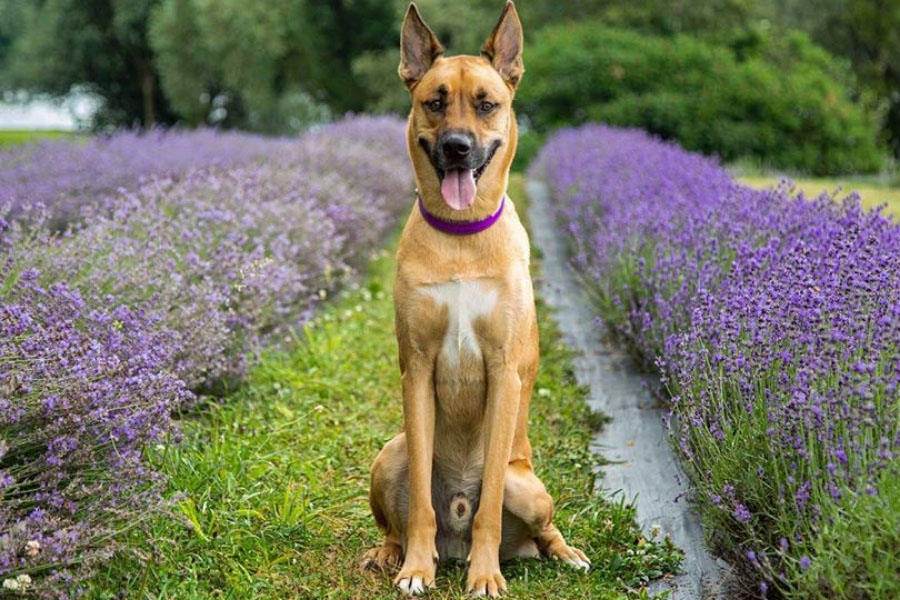 Dawson is a stud and he knows it. He’s proud of his stature and looks. He plays it to his advantage to win over the hearts and the treats. He can turn it on and off, and when it’s off, he’s a complete goof. Like a mix between the jock and class clown. He’s a social butterfly that is tolerable to small dogs, children, and new environments. 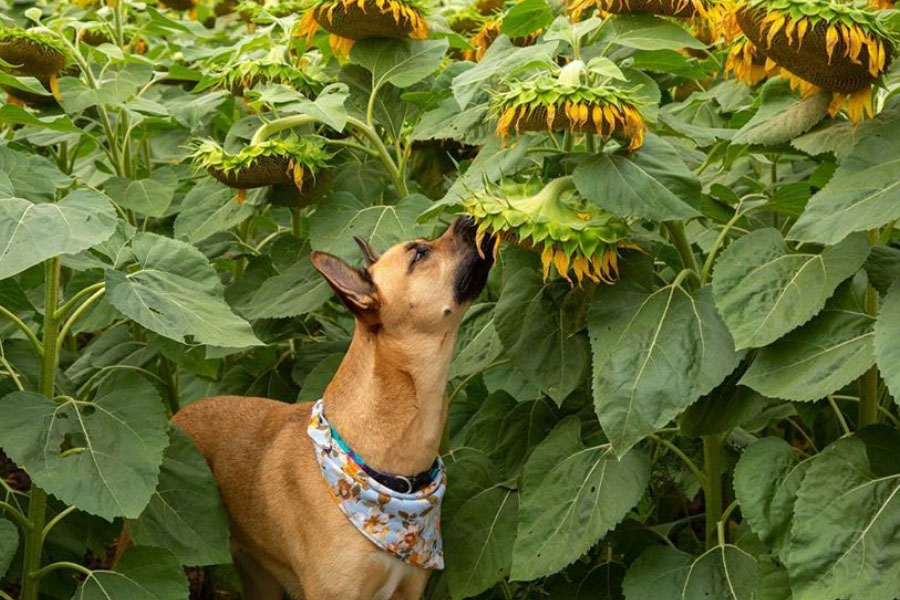 As a husky, he is very vocal when he wants someone to play with him. He loves being outdoors and will stay there and never go home. He in independent as a husky especially outdoors. But as a boxer, he is intelligent and knows when to come back. Boxers are loyal and prefer the company of their owner. They are both high-energy, playful dogs and need to be kept busy or else there is destruction as power chewers. 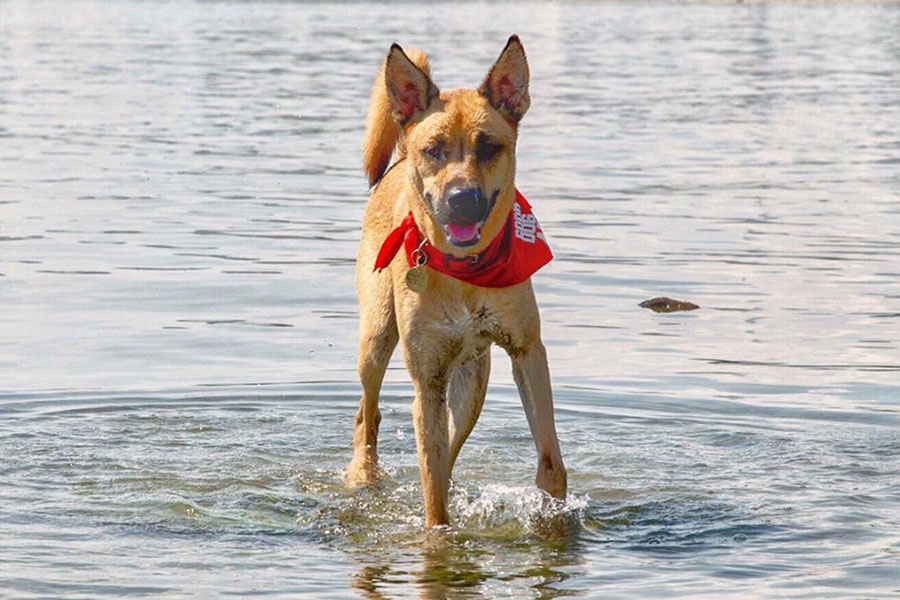 He currently needs minimum three hours of exercise a day, which ties into my point about keeping them busy. He is just over 75lbs as an adult so we need to condition his muscles to prevent hip and joint problems down the road. During the puppy years, he required more exercise in shorter spans because he was still growing and developing. 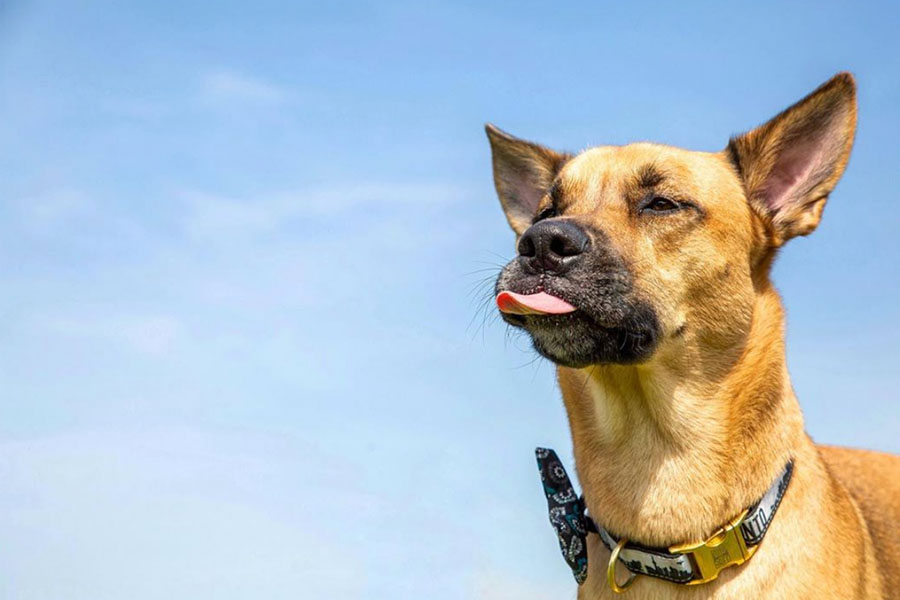 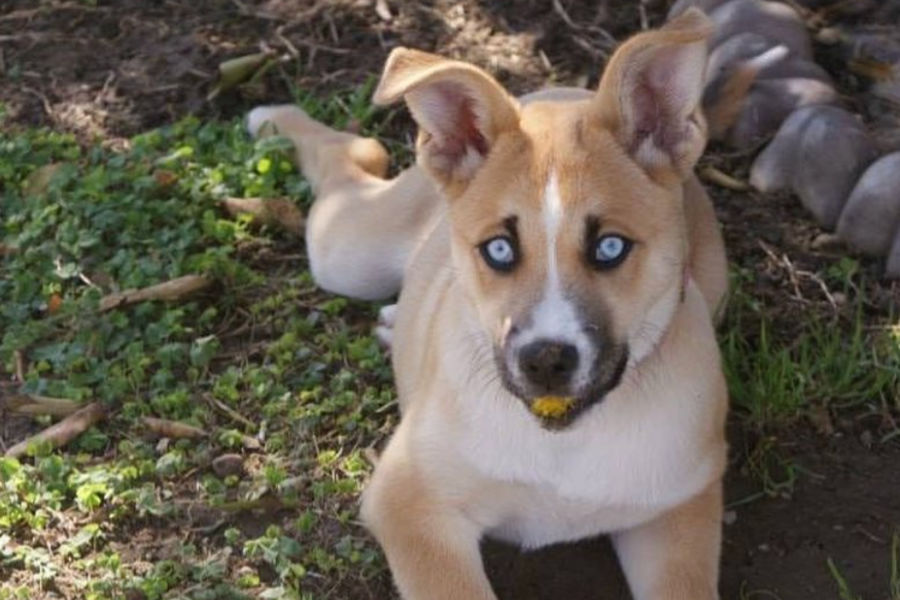 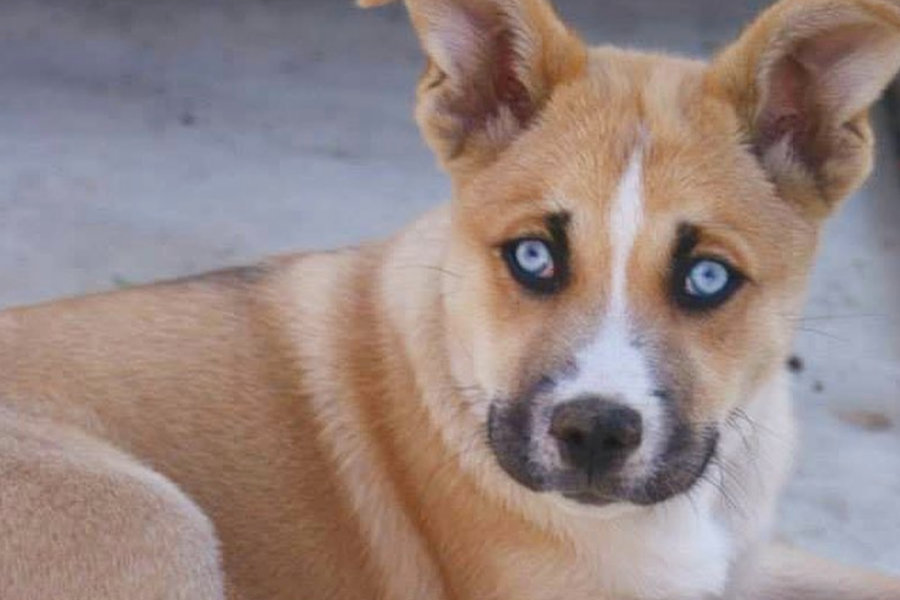 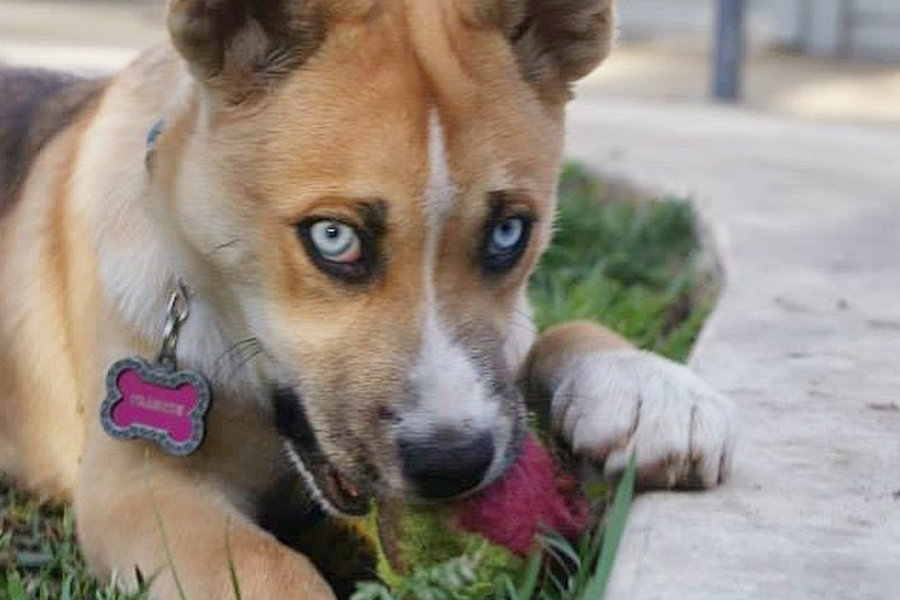 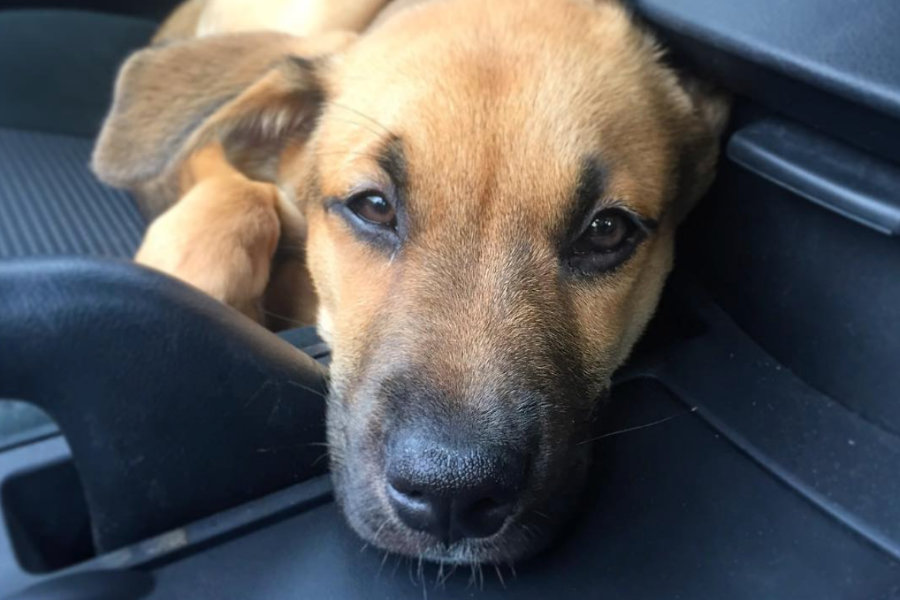 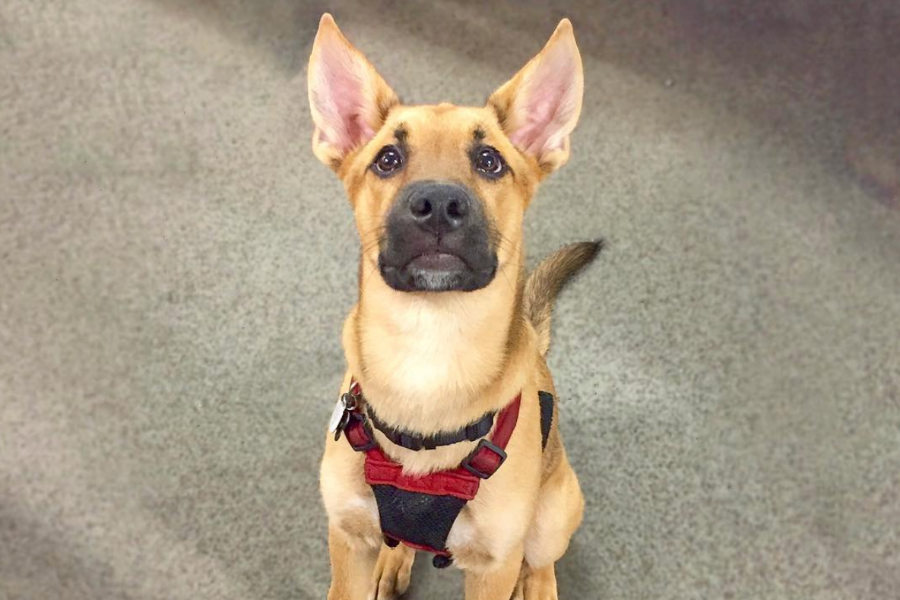 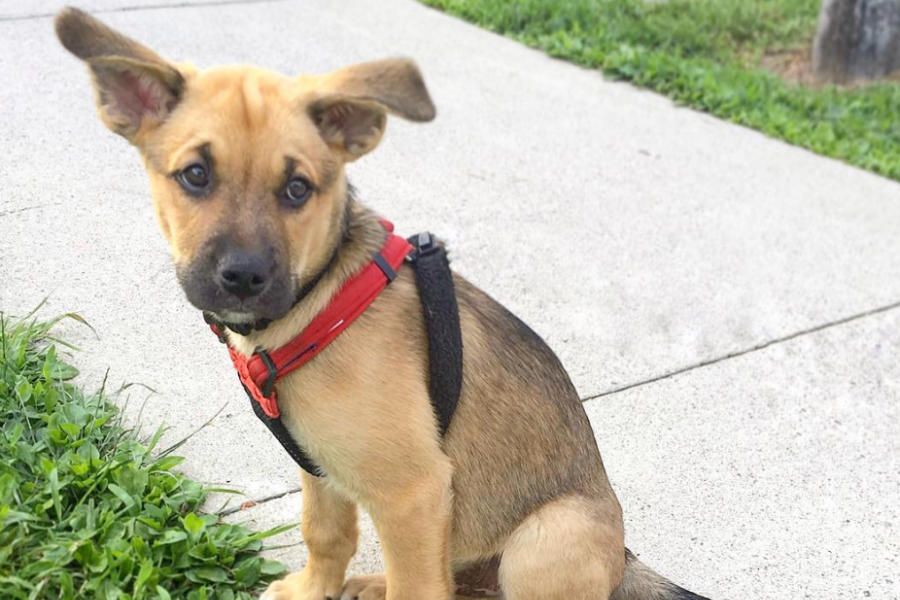 We’ve reached the end of our feature on the Boxsky cross breed. These athletic dogs are a cross between a Boxer and a Siberian Husky.

Hopefully you’ve got a better idea of these mixed dogs, especially their physical characteristics.

You should make sure you contact a reputable breeder if you’re looking to buy a Boxsky.

We recommend avoiding buying a Boxsky – or any dog – online, at a pet store or third party dealer.