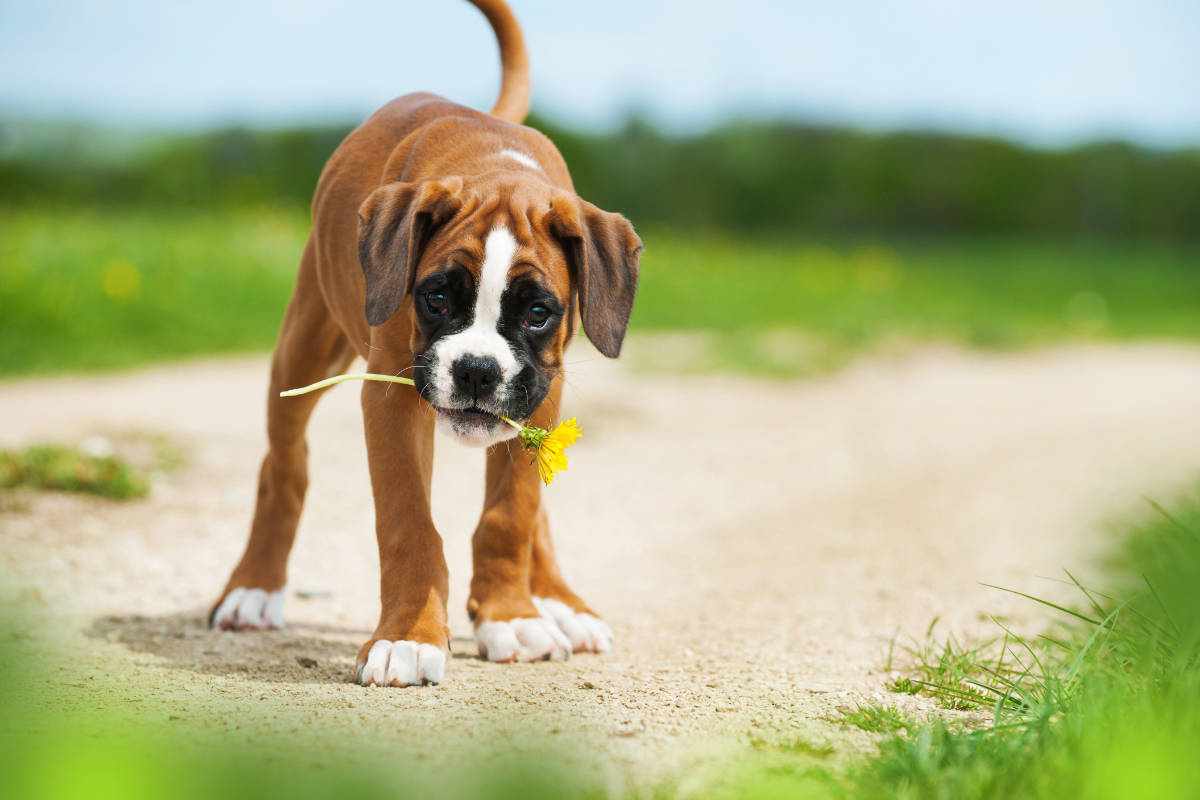 By Kieran Beckles
Updated on 6 July 2022

The Boxer is an athletic, fun-loving and family-friendly dog.

These affectionate dogs have consistently been amongst the top 20 most popular breeds in the United States to underline their popularity amongst dog lovers.

Their ancestors go back to 2,500 BC in the Assyrian Empire but the modern Boxer can trace its roots to medieval times in Germany.

Boxers are thought to have been bred down from the Bullenbeisser (Bull Biter), which was a dog used by nobles to catch and restrain bears, bisons and wild boar.

At the turn of the 19th century, the modern Boxer was starting to emerge with a sleek body and defined head.

While they can make great family pets, the Boxer has served multiple functions in society, including roles as an athlete, cattle dog, police dog, guard dog, watch dog, protection dog and a guide dog.

The American Kennel Club recognised the Boxer breed in 1904 and as of 2021, they’re the 11th most popular dog breed in the USA.

We’ll hear from Mia and Hugo (@_hugotheboxer) to get a firsthand insight into the Boxer dog breed. 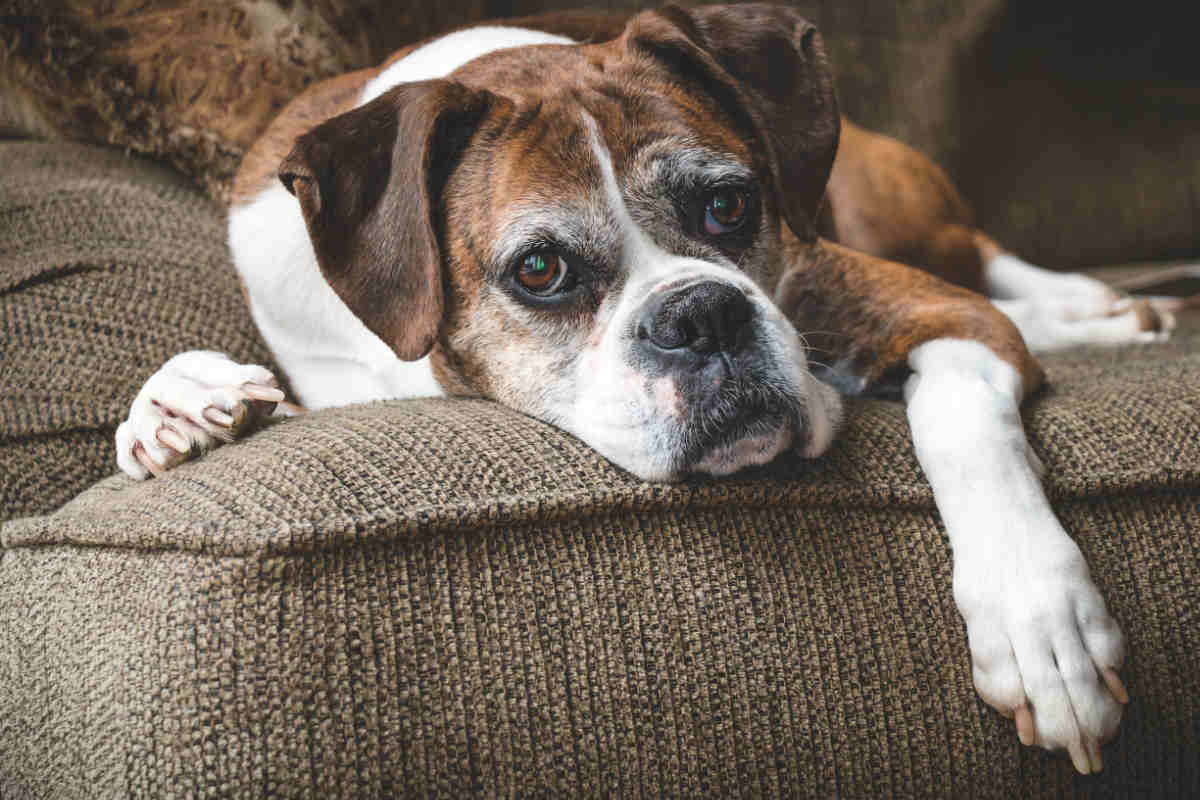 If you’re looking for a dog breed that can excel in a family setting, the Boxer could be a candidate for you. The American Kennel Club give the Boxer breed a four-star rating on their website with regards to being affectionate with the family and a five-star rating for being good with young children. Boxers are playful dogs who love to engage in humorous interactions with their fellow family members. The German breed’s traits include a patient side and a protective nature which has helped them to establish a reputation for being a great dog with children.

Mia described Boxer’s as a “sweet-natured” breed based upon her experience with Hugo (@_hugotheboxer).

The Boxer is a medium-sized dog with a muscular frame, weighing between 65 and 80 pounds depending on the sex of the dog. They’re a vigilant breed who will protect the home, although their sheer appearance and size should be sufficient to deter unwanted visitors to the home. Boxers tend to have an alert nature, an attention to detail as well as an instinctive loyalty to the family. 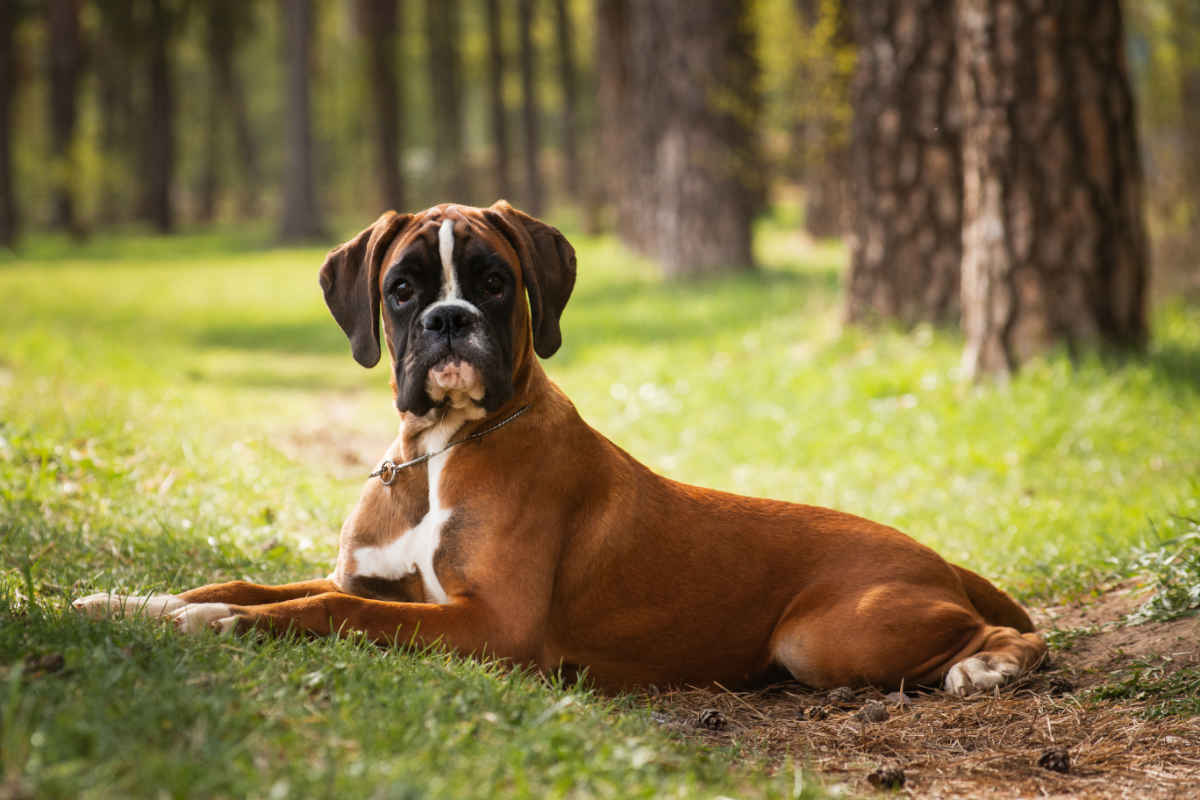 Boxers have a reputation for being an extremely playful breed with their family. The AKC highlight their fun-loving nature in their breed page on their website. It’s no surprise that the Boxer has proven so consistently popular amongst dog lovers worldwide with their silly behaviour. They’ll relish the chance to romp in the garden due to their upbeat and playful personalities. Of course, Boxer owners should always supervise playtime with a Boxer and young children seeing as the dog’s size could present a problem if their pet gets a little too over zealous in their enthusiasm to play. Aside from playtime, Boxers will require at least between 60 and 120 minutes of exercise.

From my experience… a ton! Having a family boxer growing up too, your life revolves around the dog! Hugo can go for hours, but when he’s home, you won’t be able to wake him up. Typically Hugo gets between 2-3 hour walks daily, as well as garden play and enrichment activities in the house.

While Boxers aren’t hypoallergenic as they do shed to some degree, these German dogs don’t shed as much as other dog breeds. They’ve got a relatively short coat that requires very little grooming. Overall, the AKC describe Boxers as clean dogs that don’t require lots of baths or grooming.

Mia explained that Hugo (@_hugotheboxer) requires slightly more grooming due to a problem with allergies.

A fair bit, but as they’re short haired, it’s not as bad as other breeds. Nothing a good de shedding brush can’t fix! Like any other dog, they shed more in different months. For Hugo, he tends to require more grooming than others. As he has a lot of allergies he has to have baths once or twice a week using a special anti allergy shampoo to keep his skin from becoming irritable, and to stop him losing his fur.

Although Boxers can excel as guard dogs, they don’t bark a lot. They’re a relatively quiet breed when compared to more yappy pups. The AKC give the Boxer breed a three out of five rating when it comes to barking. So the organization seems to regard Boxers as moderate barkers.

Mia has enjoyed a relatively bark-free life with Hugo (@_hugotheboxer).

Hardly in our experience. Hugo only tends to bark in instances where he’s scared, or sometimes when someone comes to the door but that bark normally turns into happy howls. 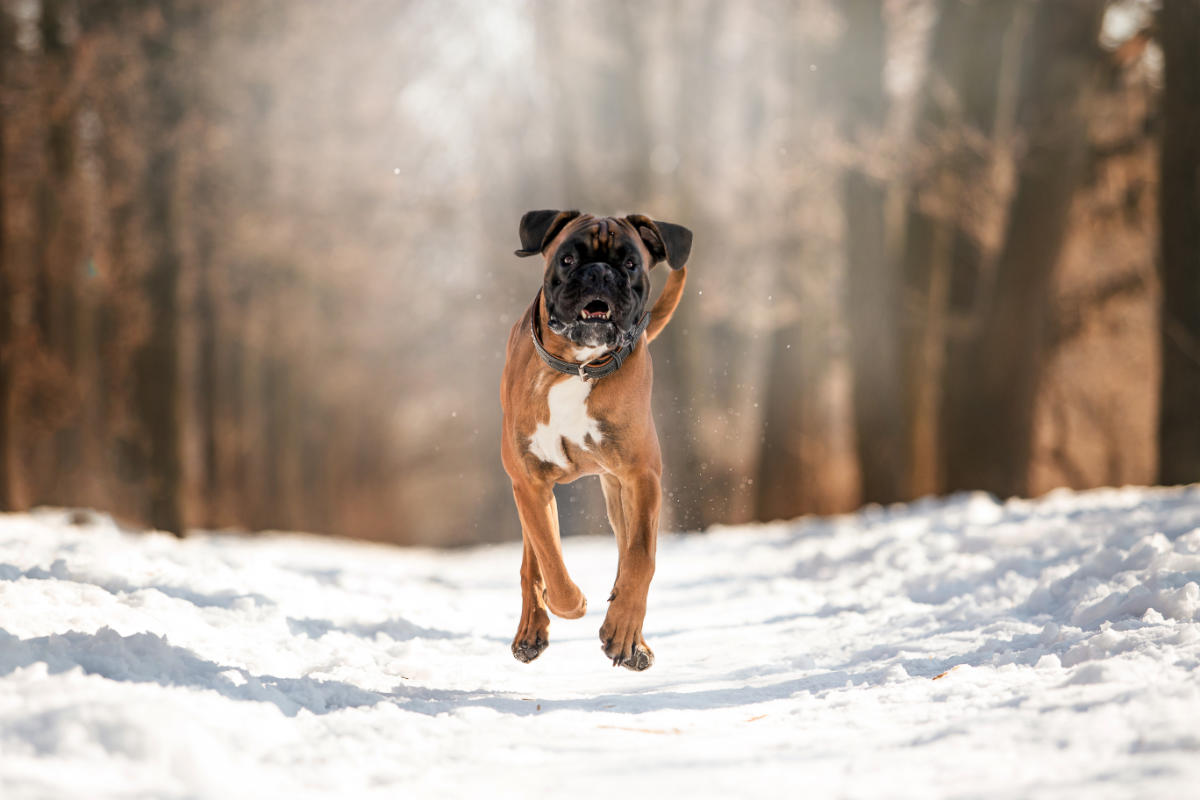 The hint is in the name! As explained by the AKC on the Boxer’s breed page, the English name Boxer refers to the way the breed spars, using their front paws when playing or defending themselves. This characteristic is still present in the modern Boxer to a certain extent.

This is why Hugo’s owner Mia (@_hugotheboxer) recommends training a Boxer from a young age!

Boxers are all play and from their breed they do like to box people! Typically as a puppy (and into adult life) they’re all paws with their long legs and love to whack you with them whenever they feel like it, so training from a young age is best, so they know what behaviour is going to be rewarded, and what won’t.

Boxers can show some aloofness or shyness around people they don’t know. It’s a good idea to bring your Boxer puppy to puppy manners classes to provide them with an opportunity to socialize with other dogs in a controlled environment. If you bring your Boxer puppy with you everywhere you go, they can experience different social environments and situations and you’re likely to have a well-rounded dog on your hands.

Mia shared her experience with Hugo (@_hugotheboxer) and some shyness around strangers.

Although Hugo can be quite timid of new people, he’ll instantly be friends with you if you come in confident and say his name, although he does sometimes just not take to new people and is scared of people with walking sticks, pushchairs, and umbrellas….

Boxers have a lot of bounce – they’re energetic dogs! If you’re looking for a lap dog or a coach potato, this breed might not be the right breed for you. While Boxers do like to chill and take long naps in the home, they’ll need lots of daily exercise to let off some steam. They’re excitable nature means that they can overwhelm visitors to your home with their overzealousness. Boxers may be prone to some exuberant jumping and rambunctiousness if they haven’t been given ample opportunity to run and play. Wag Walking suggest at least 90 minutes of exercise a day for your Boxer dog!

The AKC advise Boxer owners to keep their dogs on leash at all times on their website due to their high prey drive. As we mentioned at the start of the article, the Boxers were bred down from the Bullenbeisser who were used to hunt bear, bison, and wild boar. Some Boxers may have retained this prey drive and have a tendency to have a mind of their own. If they see a small animal worth chasing, your Boxer may prove difficult to call back. 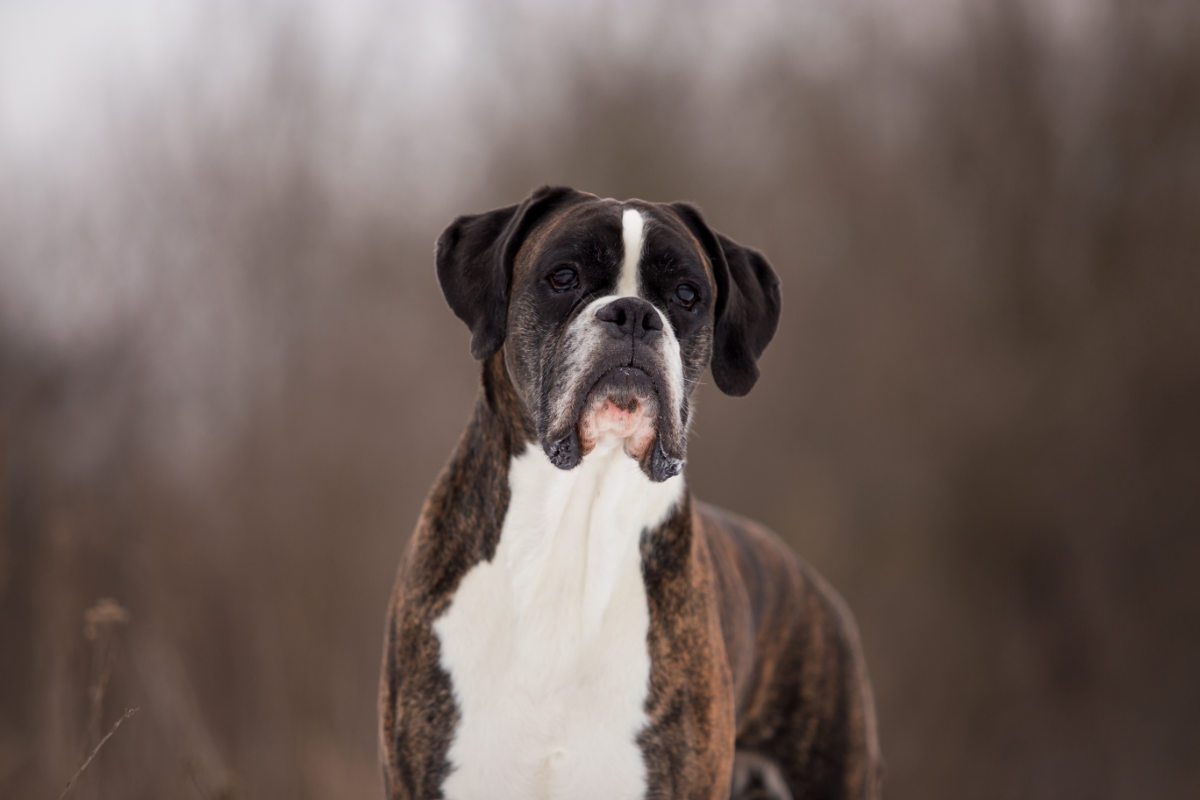 Some Boxers can be fussy when it comes mealtime. The breed require a balanced, compete diet comprised of high-quality ingredients to meet their needs. If you’ve struggled with some fussiness or pickiness at mealtime, you may want to give a fresh dog food company a try – you can read about some of the best options in the USA and in the UK here.

Hugo, for example, gets to enjoy fresh dog food created by Butternut Box.

When Hugo’s hungry, he won’t stop eating! Although many boxer owners have trouble with their dog not eating and being fussy. Due to Hugo’s allergies to chicken, turkey, and other meats finding the correct food and treats was a challenge but he loves his food at the moment which is called Butternut Box! Sometimes boxers can go 1 or 2 days without eating, then suddenly become hungry and want to eat anything in site. Hugo’s favourite food is definitely peanut butter on toast which he had most evenings.

Boxers do have some health problems to be aware of in case you’re thinking about adopting one of these dogs. They can be very sensitive to temperature, whether it’s extremely hot or cold.

You have to be careful with boxers due to being brachycephalic therefore they can’t cope with heat. So monitoring exercise is essential, they always get the zoomies, and there’s nothing better to see them just run like a crazy dog!

The AKC recommend that prospective Boxer owners confirm with breeders that they’ve carried out health tests for conditions such as hip dysplasia, heart conditions such as aortic stenosis and cardiomyopathy, thyroid deficiency, degenerative myelopathy, and certain cancers. You can check out the full list of recommended health tests for Boxers as suggested by the American Boxer Club. 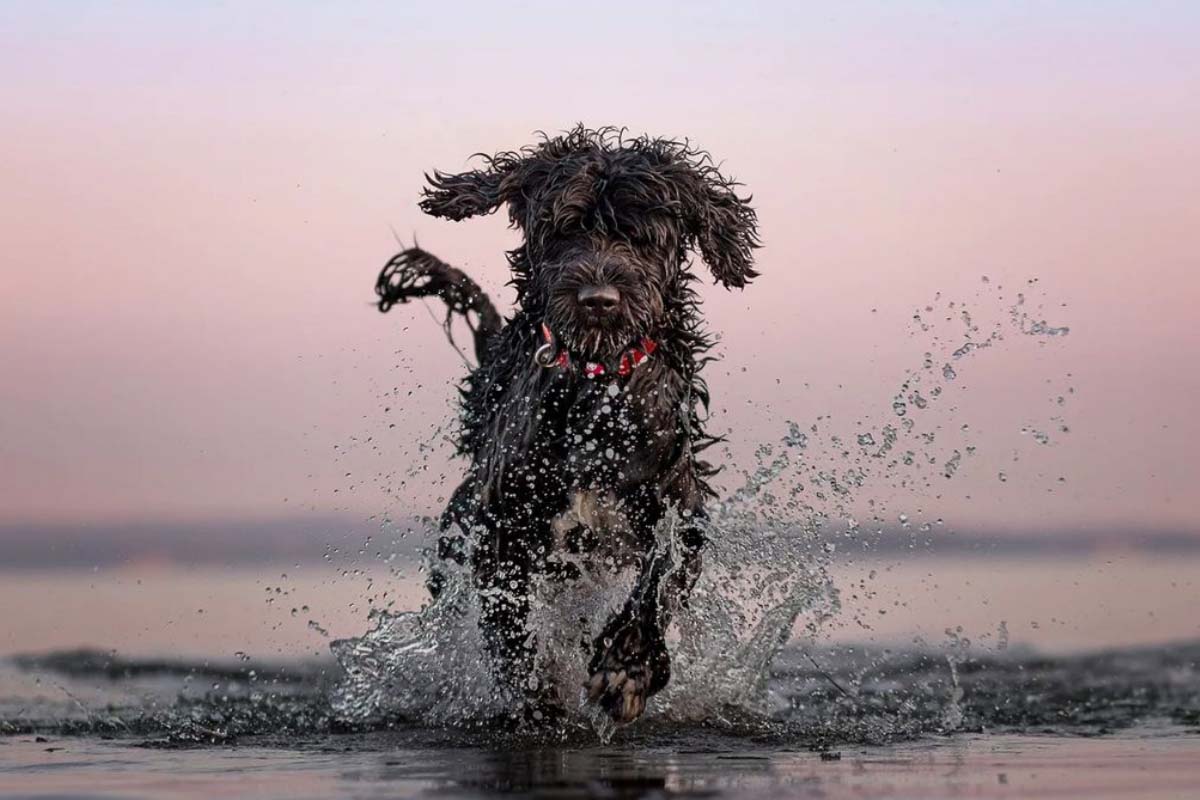