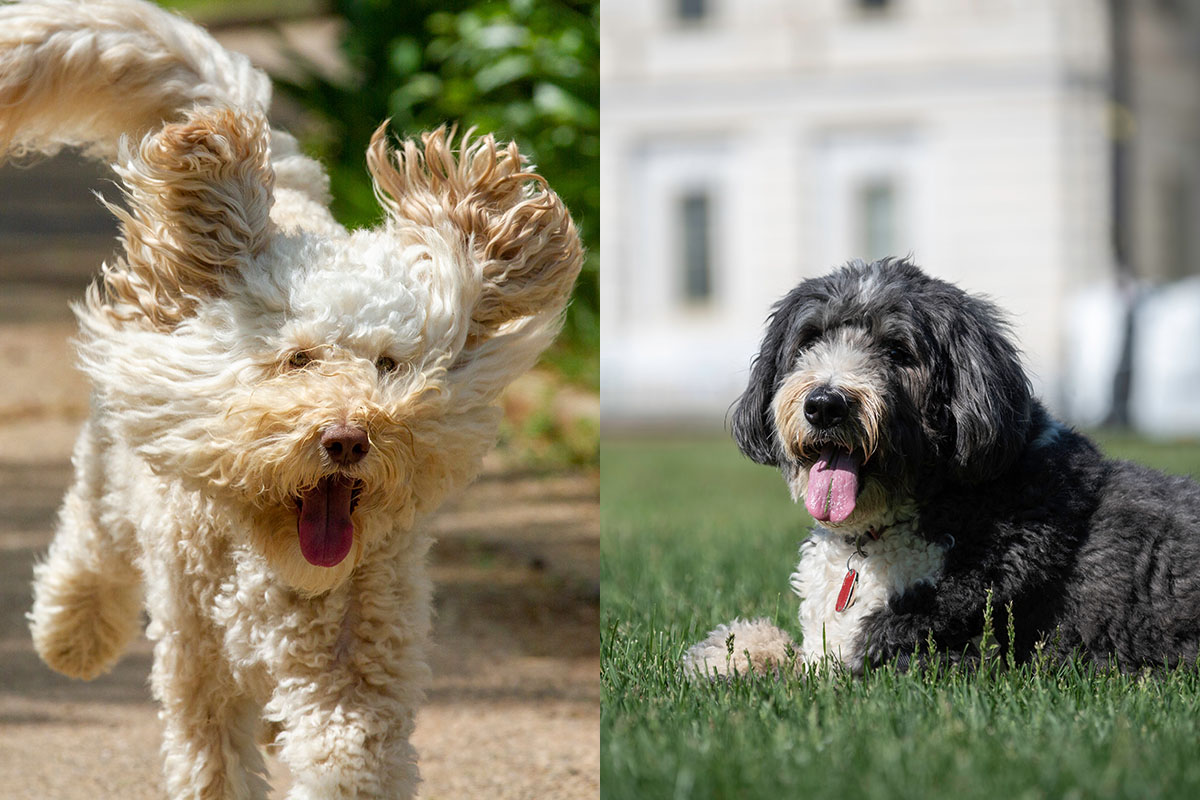 Do you know the difference between a Bernedoodle and a Labradoodle?

These two hybrid dogs are members of the Doodle family, sharing some traits in common but possessing notable differences.

The Labradoodle is arguably more popular than the Bernedoodle as one of the best-known so-called designer dog breeds.

Neither the Bernedoodle nor the Labradoodle is recognised by the American Kennel Club or the Kennel Club in the United Kingdom.

In this article, we’re going to take a closer look at the Bernedoodle and Labradoodle mix breeds, looking at their size, temperament, exercise needs and price.

So without further ado, let’s start our feature on Bernedoodle vs Labradoodle.

What Is A Bernedoodle? 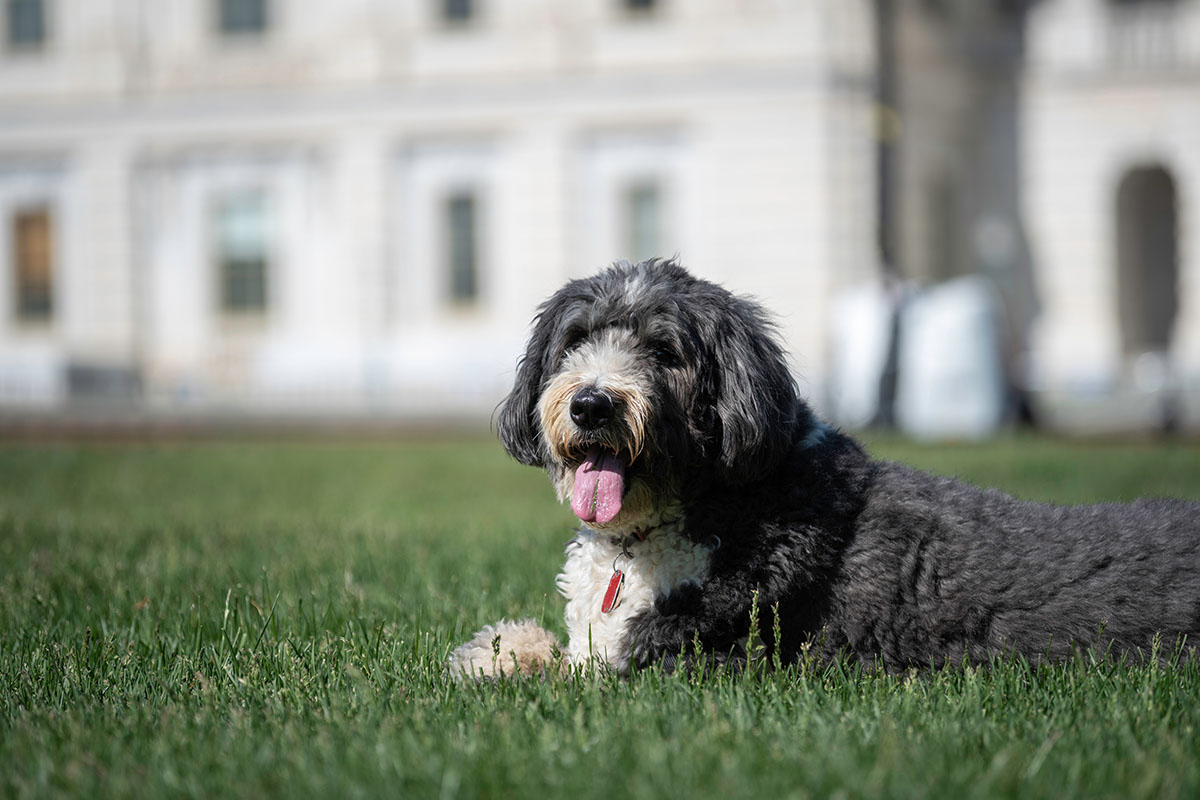 The American Canine Hybrid Club, Dog Registry of America and International Designer Canine Registry recognise the Bernedoodle but these hybrid dogs haven’t been granted status by the AKC or KC. 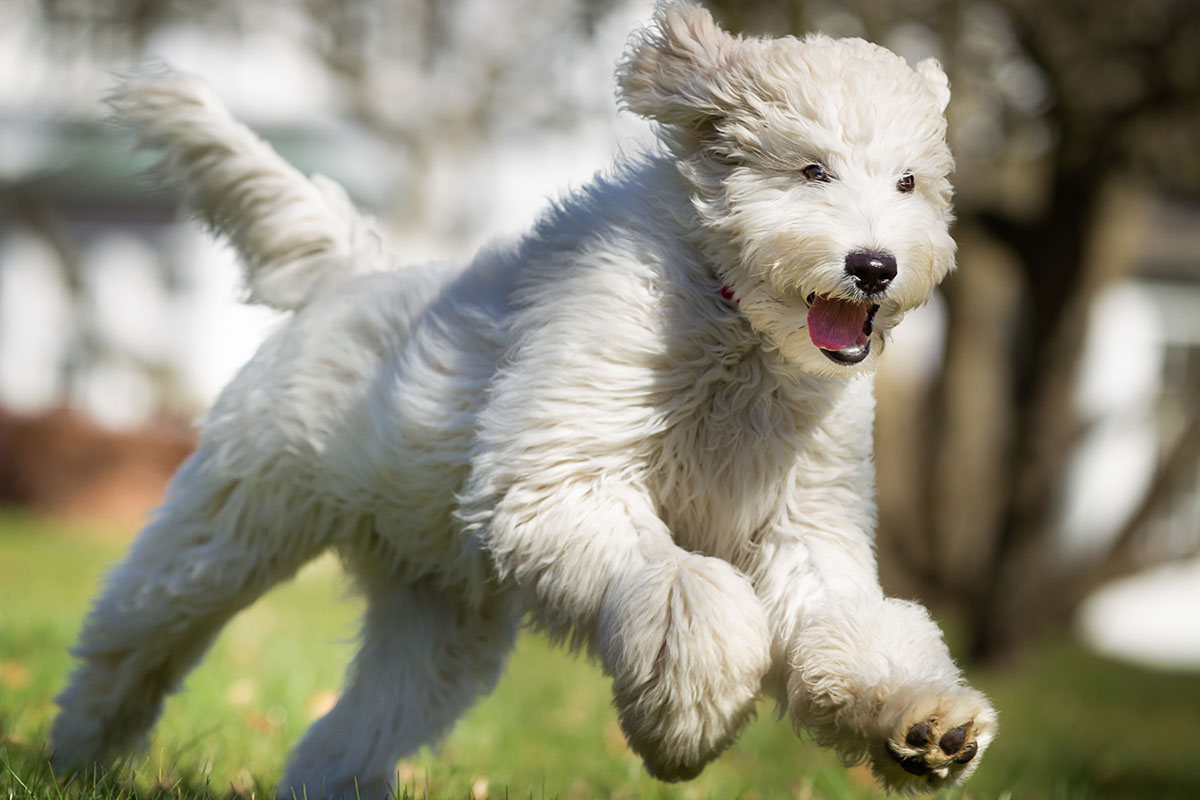 The Labradoodle is a cross between a Labrador Retriever and a Poodle. This popular mix breed can also be referred to as a Labrador Poodle cross.

Where Do Bernedoodle Come From? 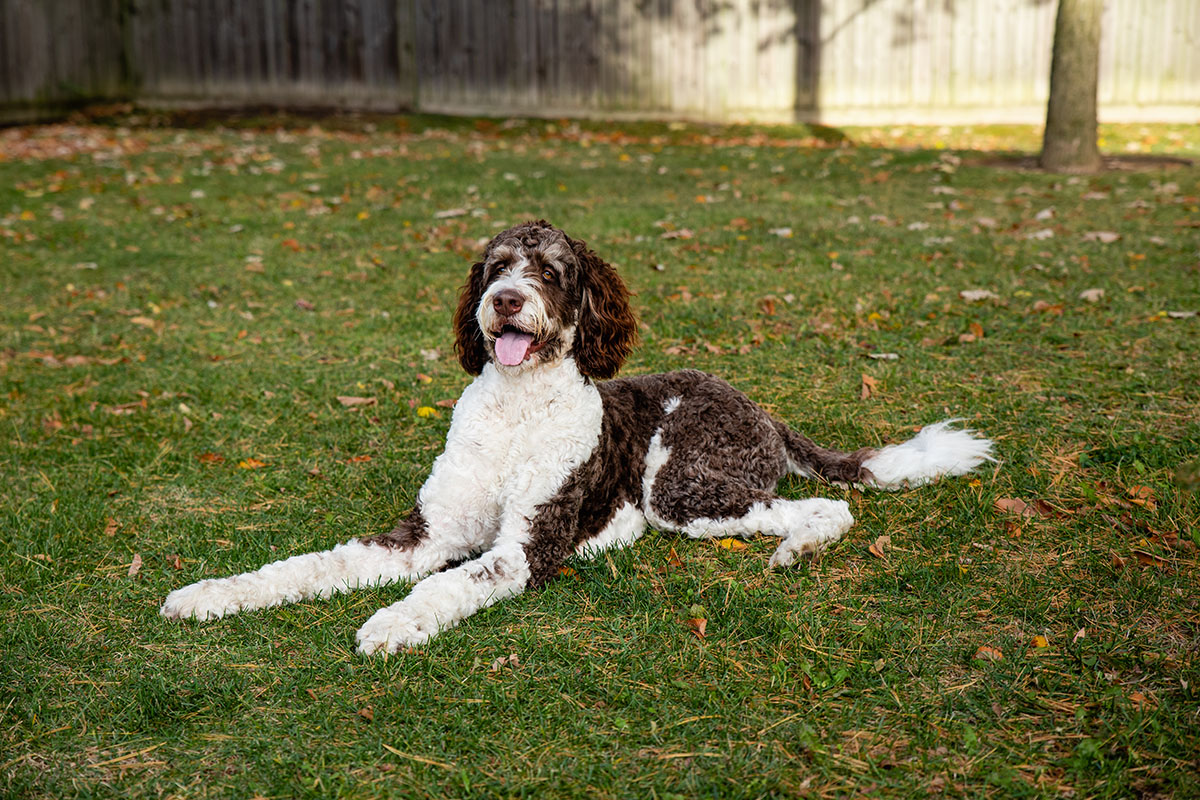 The Bernedoodle is thought to have been created by Sherry Rupke of Swissridge Kennels. It’s thought that Rupke started breeding her first Bernedoodles in 2003.

Where Do Labradoodle Come From? 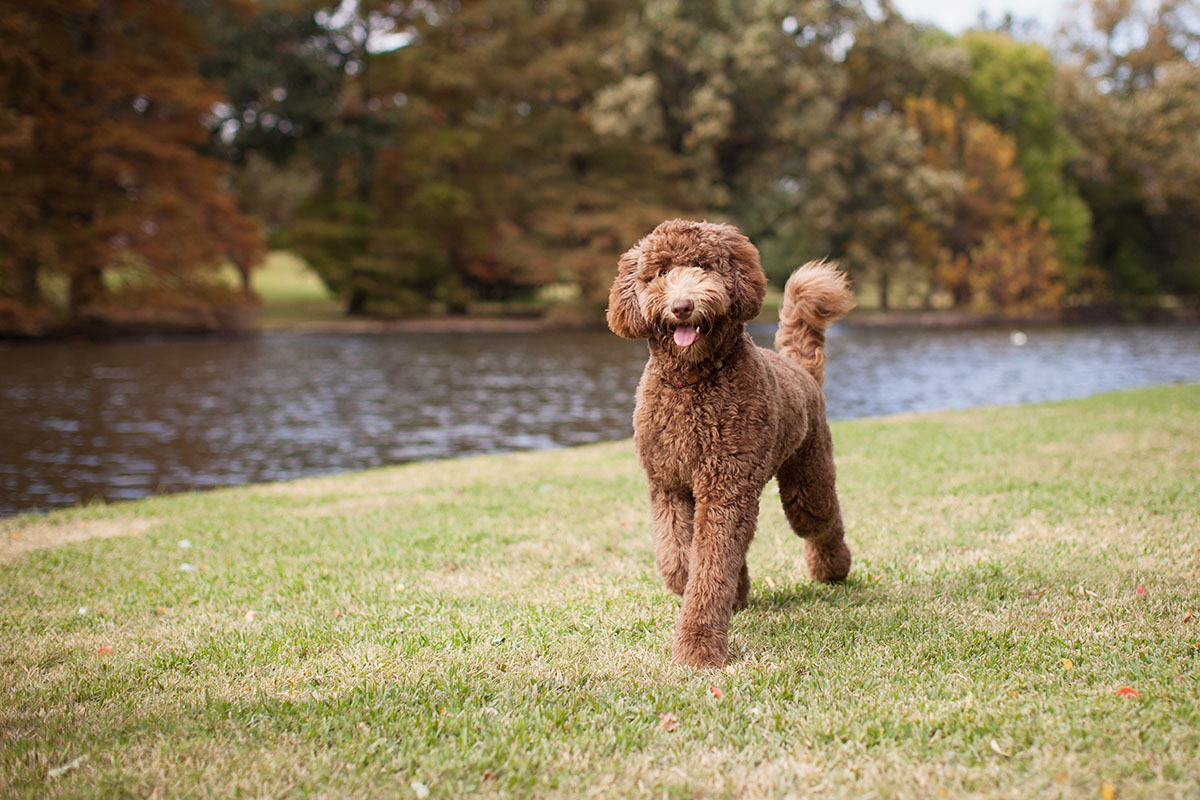 Donald Campbell is credited with first using the term “Labradoodle” to describe his dog in 1955. The breed didn’t enjoy a surge in popularity until the 1980s and early 1990s.

According to Wikipedia, Australian breeder Wally Conron introduced the cross-breed to the Royal Guide Dog Association of Australia in Victoria. Conron spotted that the Poodle’s low-shedding coat and Labrador’s temperament and trainability could be combined to create a guide dog suitable for people with allergies to fur and dander. 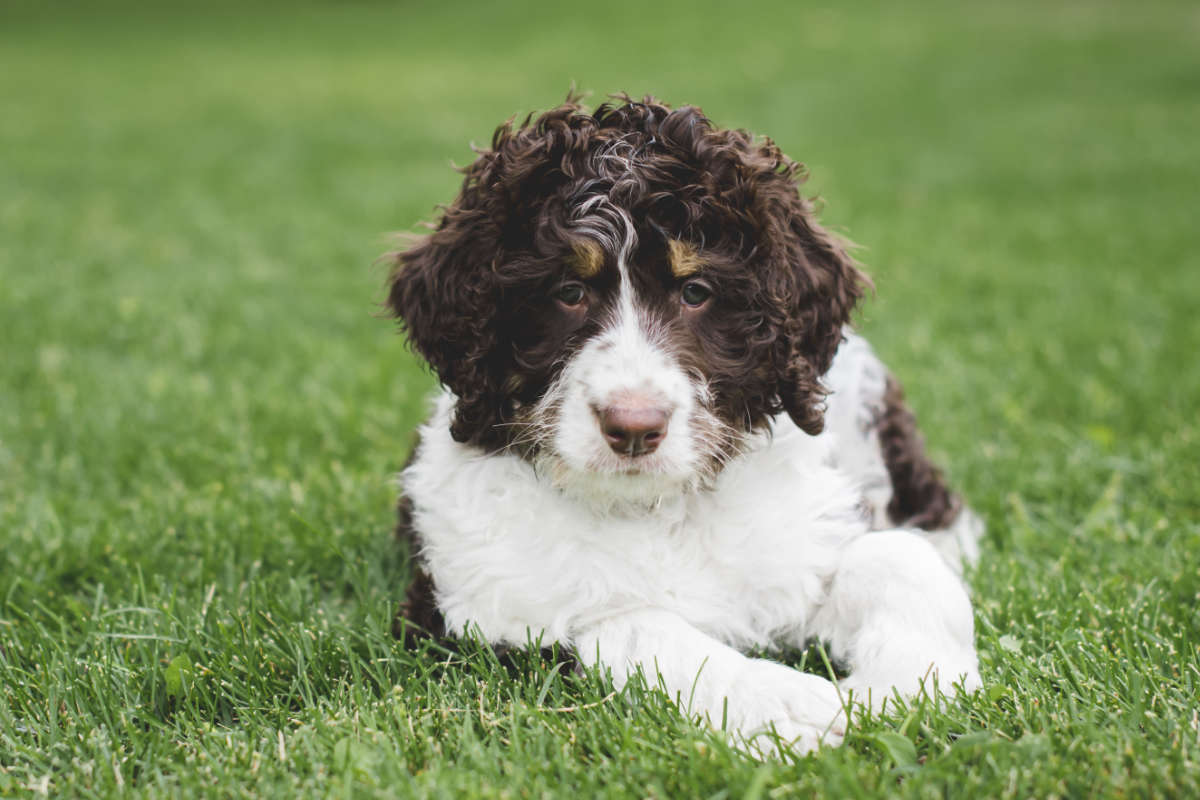 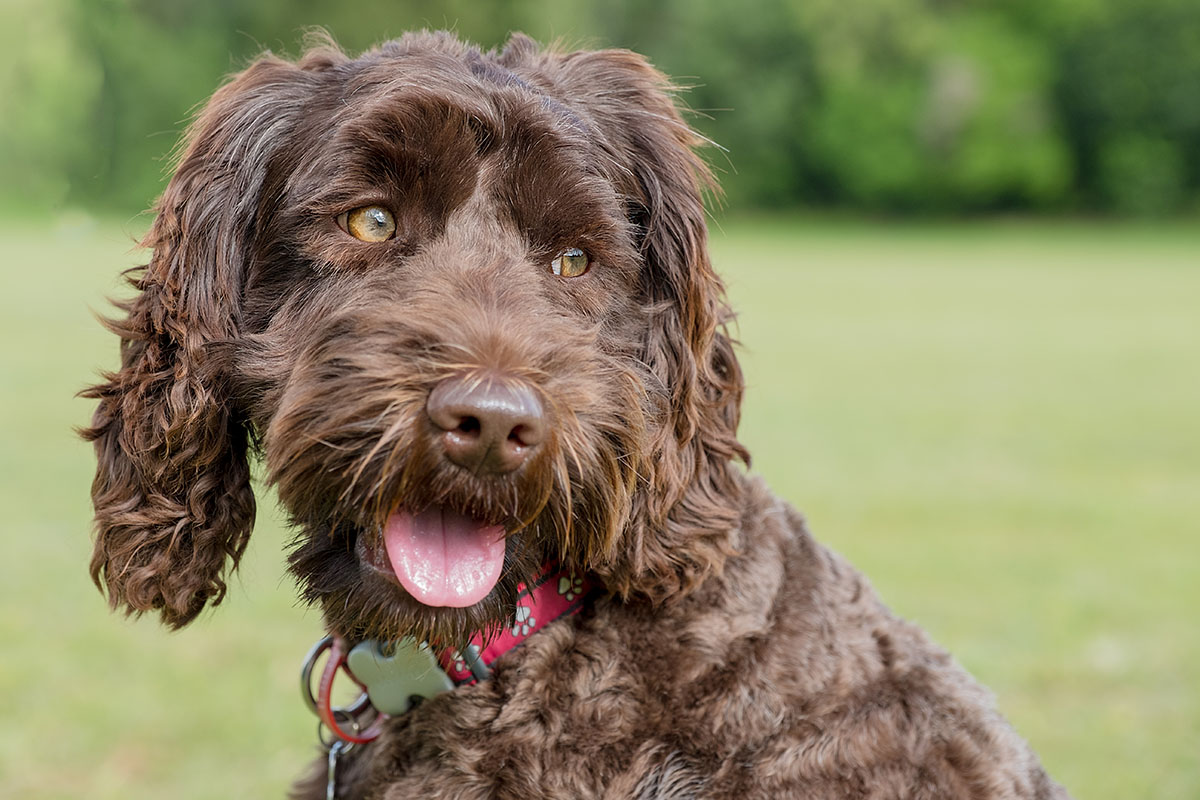 Bernedoodles tend to inherit a blend of physical traits from their parents – so they can get a black and white, grey and white, brown and white or tricolor coat that we associate with the Bernese Mountain Dog breed. They’ll usually have dark brown eyes and a black snout with triangular-shaped ears. Having said that, each Bernedoodle could be slightly different and there’s no guarantee that they’ll inherit certain desired traits.

The Labradoodle is a medium-sized dog that will usually have a wooly coat that is similar in texture to their Poodle parent. You can find Labradoodles with a cream or yellow coat, while some members of the cross breed will be black or chocolate. It is possible for a Labradoodle to have a blue, sable, brindle or red coat but these colors are less common. Labradoodles have brown eyes that are almond-shaped and a black or brown nose. 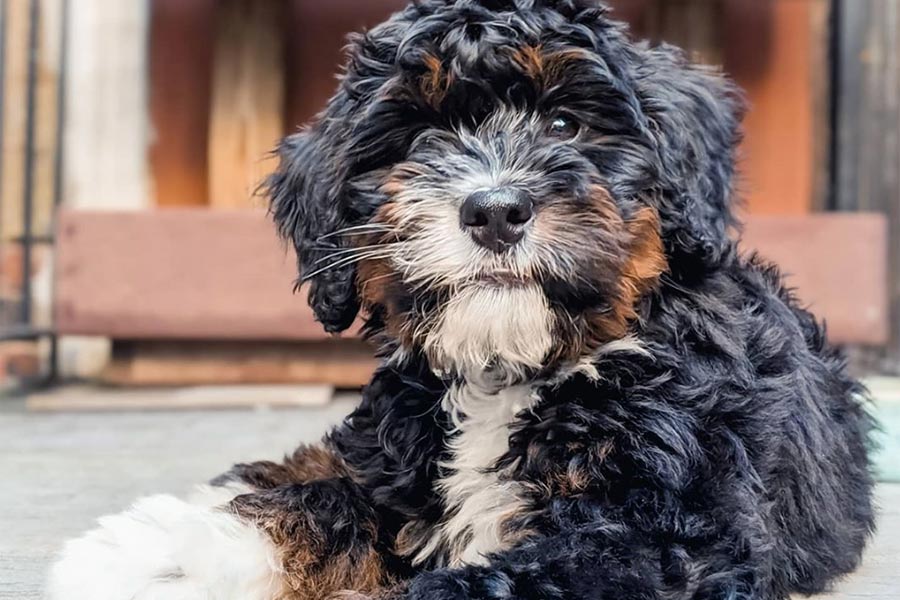 Bernedoodles are friendly, playful and sociable dogs that can make excellent family pets. They’re hardworking dogs that like to have a sense of purpose so you’ll need to ensure your Bernedoodle gets plenty of mental and physical stimulation. They’ll usually be a loyal dog that will be eager to please. As a relatively social cross breed, Bernedoodles should do well around children and other family pets. Of course, supervision is required at all times if you bring your Bernedoodle into a home with kids. Their sheer size means they could become a hazard.

We’ve already heard that the Labradoodle cross breed has proven popular around the world thanks to their gentle but trainable personalities. They love all people so this social cross breed will enjoy meeting new dogs and new people. They’re perfect for the dog park! Labradoodles are the result of breeding between two of the world’s most-intelligent dog breeds. As a result, they’ll be quick to pick up new commands and tricks. They can be hyper so never leave a Labradoodle alone with a young child in case they accidentally knock them over.

Bernedoodles will have moderate to high excercise needs depending on each individual member of the cross breed. The Poodle is a high-energy dog – more so than the Bernese Mountain Dog. They’ll need at least 60 minutes of exercise a day. They’ll enjoy joining their owners on a long walk or a hike, doing some mentally-stimulating games in the garden or training at home. Bernedoodles need a lot of interaction with their owners so you’ll need to ensure you’re providing your Doodle with sufficient mental and physical stimulation.

It’s a similar case with the Labradoodle as their the offspring of two energetic dog breeds. Generally, Labradoodles will need around 60 minutes of exercise a day – but more won’t hurt! If your Labradoodle doesn’t get sufficient mental or physical stimulation, they could resort to destructive behaviours such as chewing or digging. They’ll enjoy a romp in the dog park, a run with their owner, a dip in the pond or playtime in the yard. 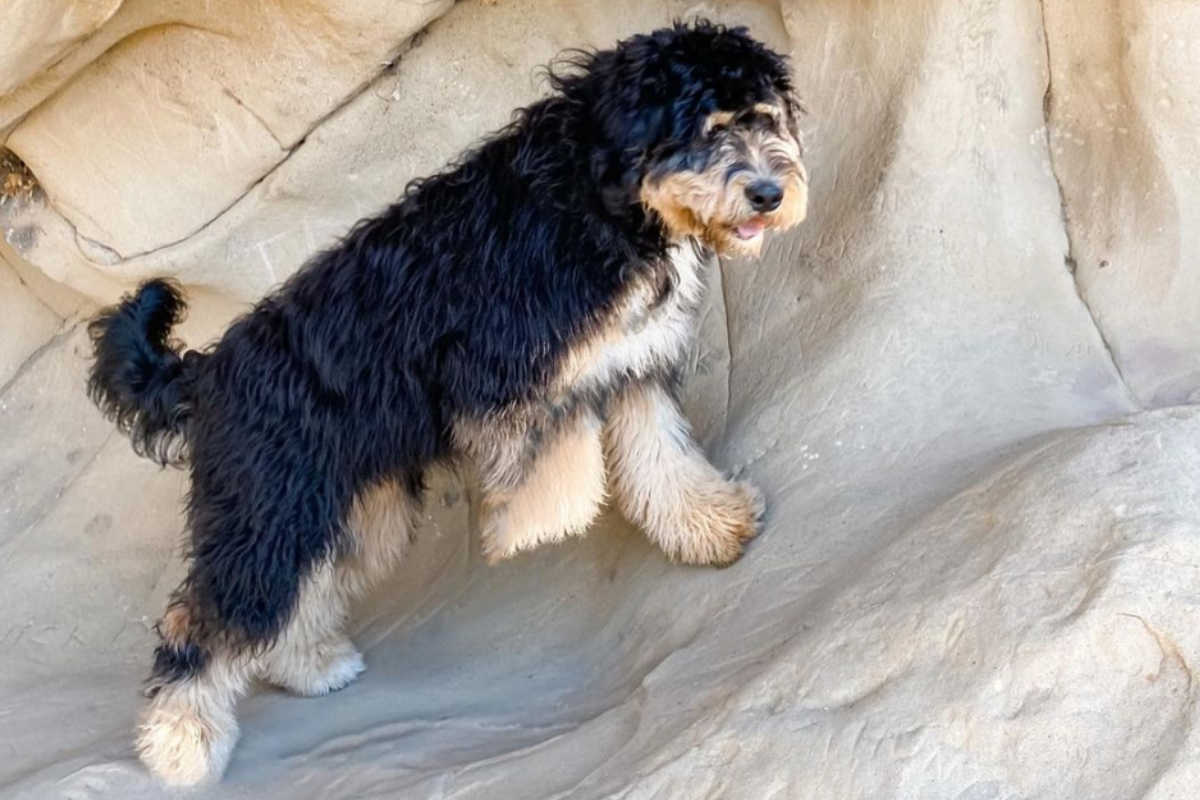 Bernedoodles and Labradoodles are hypoallergenic cross breeds so they could be a good option for anyone who struggles with allergies to dog hair and dog dander. These two breeds have been crossed with Poodle to produce a low-shedding dog breed that doesn’t produce a lot of dander. Having said that, Bernedoodles and Labradoodles could still trigger your allergies through their salvia, urine or allergens caught in their coat.

Neither the Bernedoodle nor the Labradoodle are shedders. They should shed minimally if they’re first generation and they could shed even less if they’re second or third generation.

Having said that, Bernedoodles and Labradoodles will both require regular grooming to maintain the appearance and health of their coat. While some dog owners may feel comfortable carrying out their pet’s grooming and care requirements, you may find it easier to take your Doodle to your local professional groomer. This can be pricey so you’ll need to budget for this service. 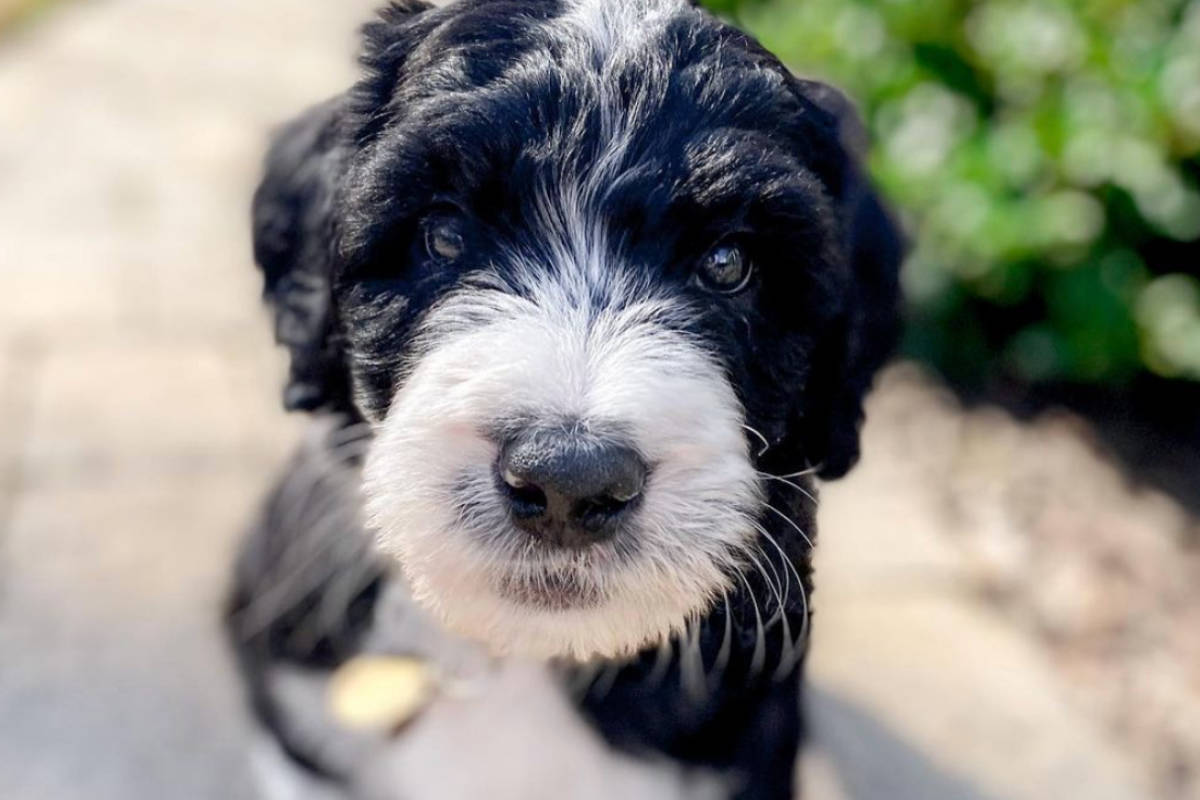 Bernedoodles have an average life expectancy of 12 to 18 years, while the Labradoodle can live anywhere from 12 to 15 years. These are rough estimates and some of these Doodles could live shorter or longer lives.

The Difference Between Bernedoodle Vs Labradoodle 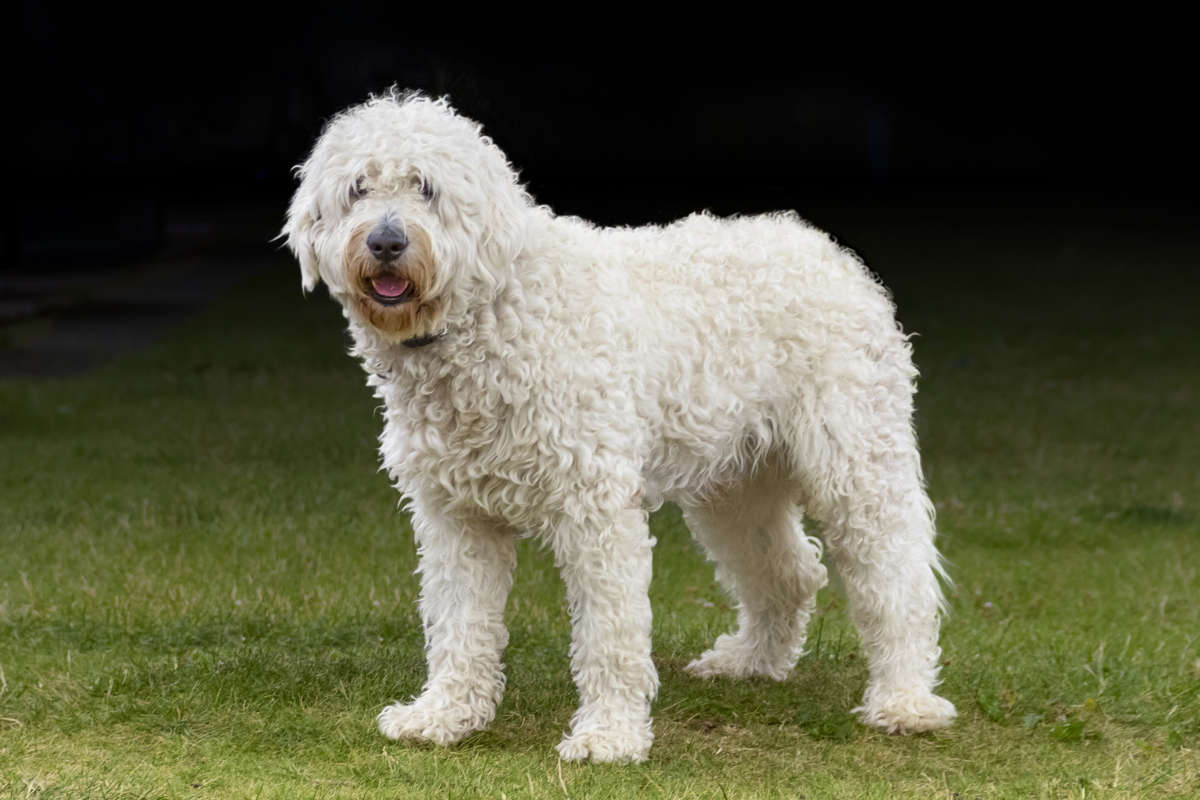 The Bernedoodle and Labradoodle have the Poodle’s genes in common but their differences will usually come from their other parent – the Bernese Mountain Dog and the Labrador Retriever. As a result, the Labradoodle tends to be slightly more trainable, a little more energetic and a tad smarter. Having said that, the Bernedoodle is a loyal, loving and outgoing cross breed.

The Similarities Between Bernedoodle Vs Labradoodle

The biggest similarity is their hypoallergenic qualities. Bernedoodles and Labradoodles don’t shed much – if at all. As a result, they’re a great option for dog lovers or people with disabilities who need a dog that won’t trigger their allergies but can be trained to a relatively high level. Bernedoodles and Labradoodles have demanding grooming needs so that’s another trait in common.

Bernedoodle Vs Labradoodle – In Conclusion 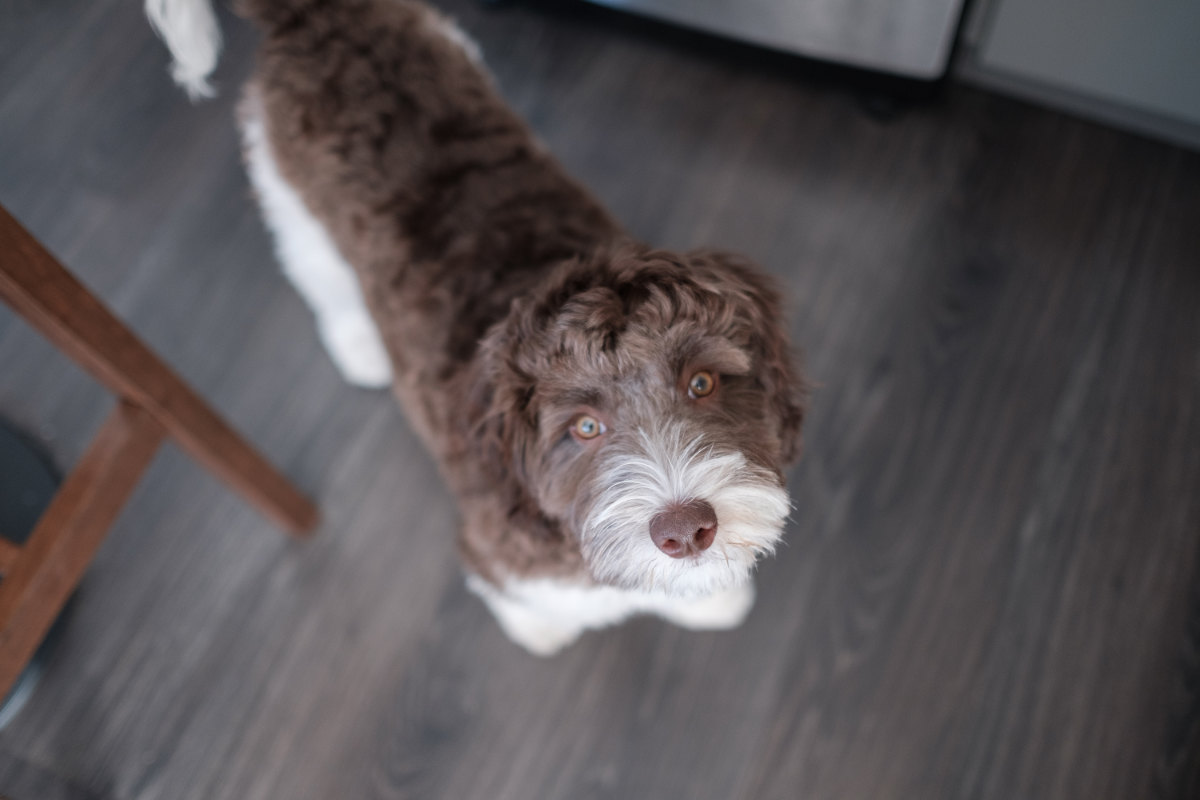 We’ve reached the end of our Bernedoodle v Labradoodle feature.

These are two cross breeds that are considered members of the Doodle family seeing as they’re both the result of breeding with a Poodle.

In the case of the Bernedoodle, they’re a cross between a Bernese Mountain Dog and a Poodle. The Labradoodle is a Labrador Retriever and Poodle mix.

You can check out our dedicated breed page for the Bernedoodle here and Labradoodle here.