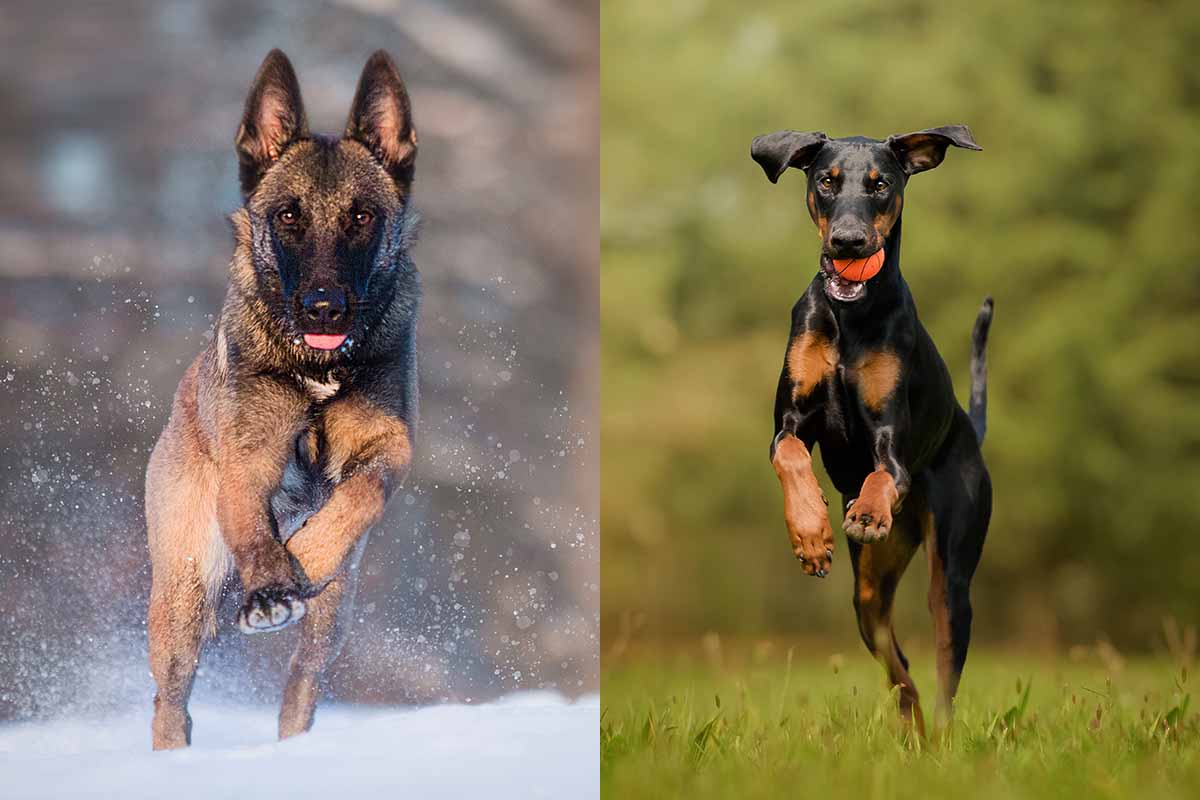 By Kieran Beckles
Updated on 23 September 2022

Do you know the difference between a Belgian Malinois and a Doberman?

They’re two breeds that are associated with working as police dogs, serving in the military, acting as effective protection dogs as well as being much-loved family pets.

Belgian Malinois and Doberman are two examples of hard-working breeds that have a lot of energy, are eager to please, love to have a sense of purpose and highly trainable.

Having said that, these two dog breeds will require lots of socialization and training from a young age to prevent unwanted behaviours coming to the fore.

While Belgian Malinois and Doberman are often stereotyped as hostile dogs, their respective breed standards outline that neither dog is permitted to show signs of aggression.

In this article, we’re going to take a closer look at the Belgian Malinois and Doberman dog breeds, examining their appearance, temperament, exercise needs and much more.

With the introduction over, let’s start our feature on Belgian Malinois vs Doberman. 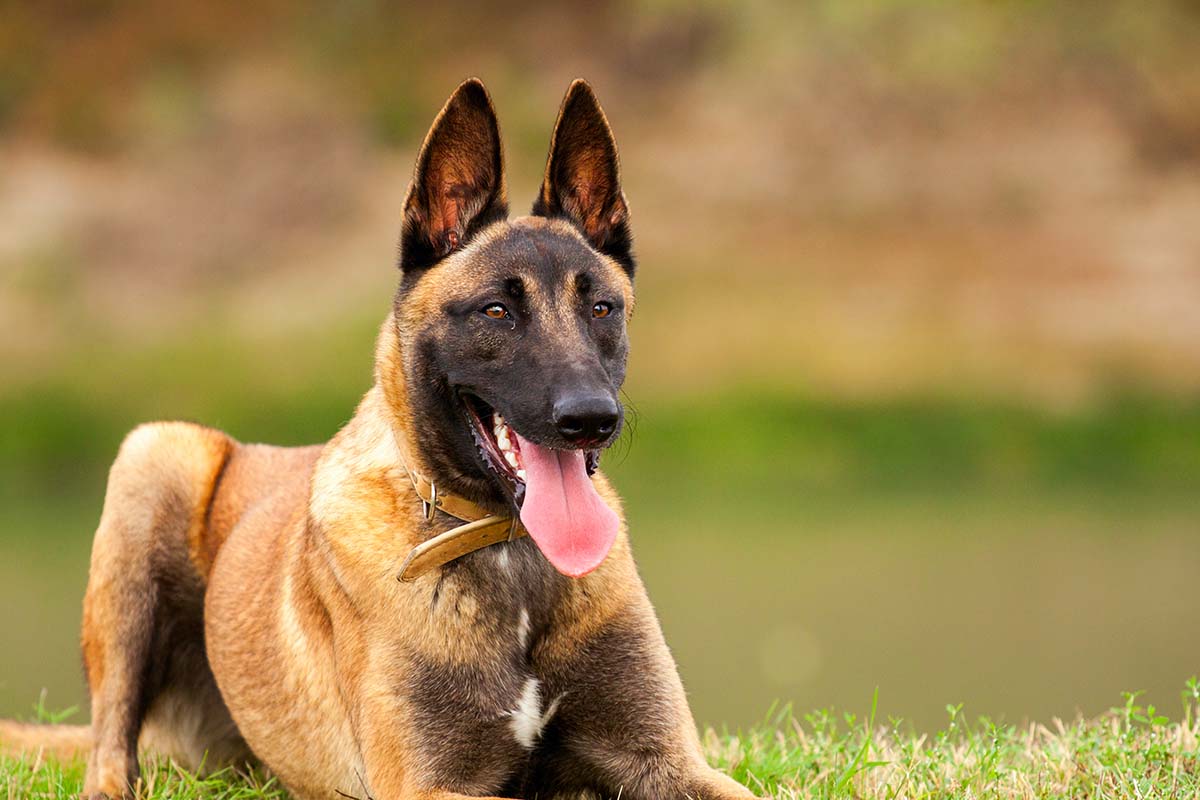 What Is A Doberman?

Doberman Pinschers are a dog breed recognised by the American Kennel Club and the Kennel Club in the UK. They’re members of the working group like the Belgian Malinois.

The AKC use the words “alert, loyal and fearless” to describe a breed that is often billed as the world’s finest protection dogs. 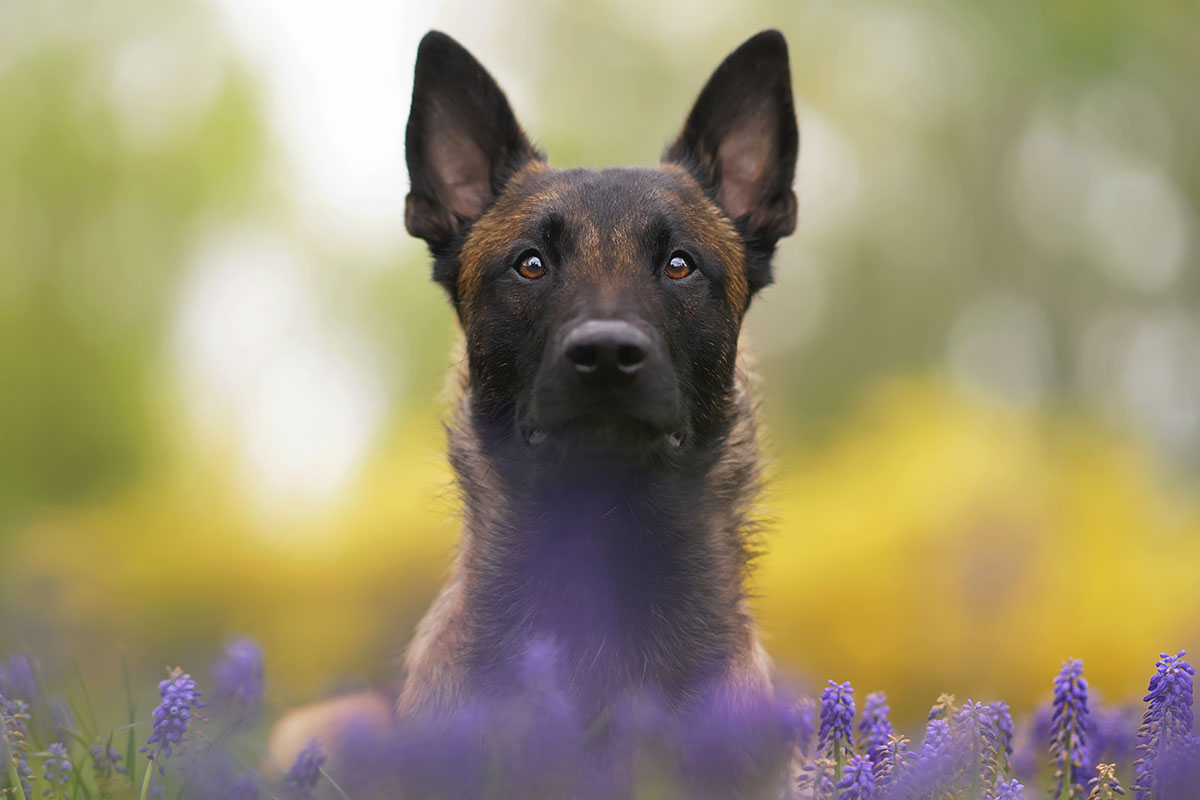 As their breed name indicates, Belgian Malinois hail from Belgium. They originate from the northwestern region of Belgium in a place called Malines. They’re classified as a herding dog along with three other herding breeds that are closely related – the Tervuren, Laekenois and Groenendael (aka the Belgian Shepherd).

Belgian Malinois were initially used as sheepdogs by Belgian farmers in the early 19th century, described as “peerless livestock herders”. Their superb work ethic and high intelligence levels resulted in their exportation to the UK and the USA.

The first Belgian Malinois arrived in America in 1911. However, the breed’s numbers were impacted by World War I and World War II as these dogs were used in the military and their export abroad came to a halt. The Belgian Malinois bounced back in the 1950s and 1960s and they were recognised as a breed by the AKC in 1959. In the 21st century, you’re more likely to find a Belgian Malinois working in a police force, military unit or protecting a property rather.

As of 2021, the Belgian Malinois is the 36th most-popular dog breed in the USA.

Where Do Doberman Come From?

The Doberman is often nicknamed the Taxman’s dog in a nod to the breed’s origins. Tax collector and dog breeder Louis Dobermann set about trying to create the perfect dog to accompany him on his rounds in his local town of Apolda. Dobermann wanted an imposing dog that could protect him.

Dobermann is thought to have used the Black and Tan Terrier, German Pinscher and Rottweiler as well as some smooth-coated herding dogs to create his breed. His Dobermans were quick to earn a reputation for being excellent working dogs that were dependable, loyal and versatile. Like the Belgian Malinois, they excelled alongside police and military. Dobermans can also make excellent service animals.

The Doberman was first recognised by the AKC in 1908. At the time of writing, the Doberman is the 16th most-popular dog breed in the USA.

Belgian Malinois will usually be around 22 to 26 inches tall and weigh from 40 pounds to 80 pounds. Dobermans are slightly taller than Belgian Malinois, with a height range of 24 to 28 inches and weighing in at 60 to 100 pounds. 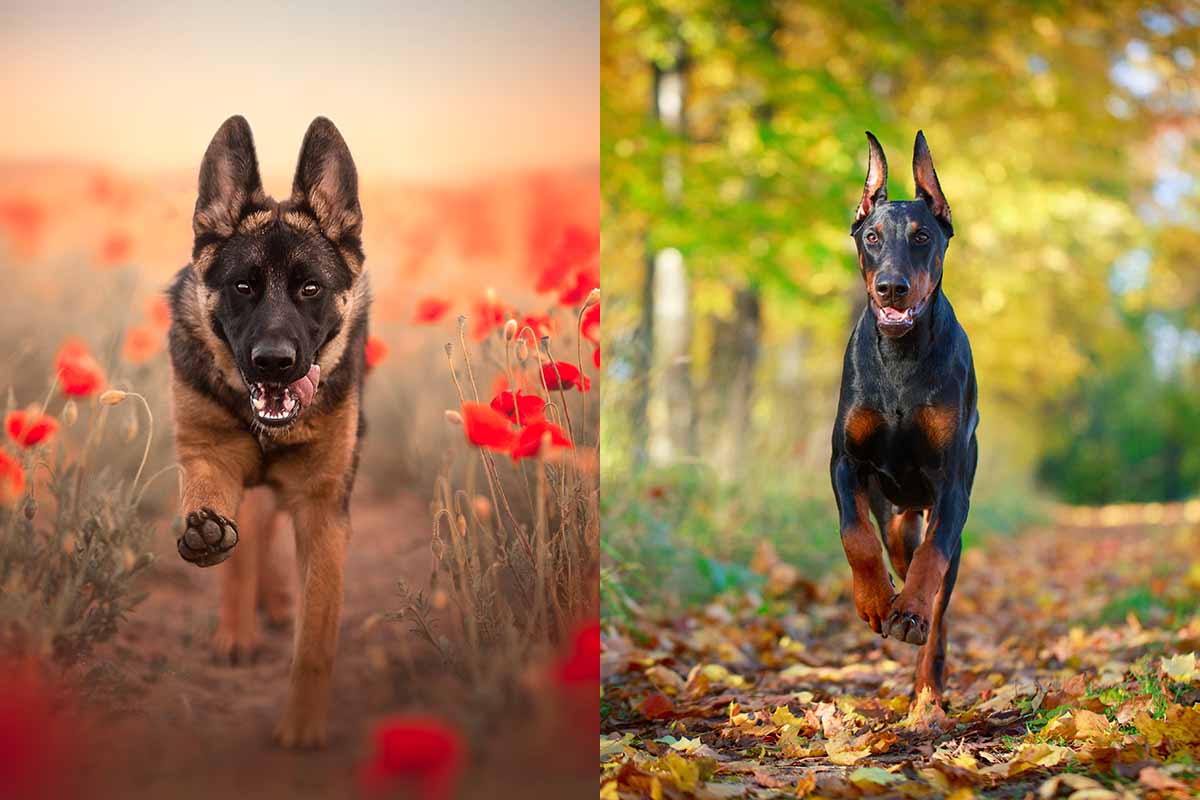 Belgian Malinois have a short coat that is made up of a straight outer coat and a denser under coat. This helps to protect against the elements, whether they’re working in the field, working as service animals or exploring with their dog owners. They’ve got a fawn-to-mahogony coat color with black on their ears and black markings on their face and tips of their hair.

Let’s take a look at their breed standard to learn more about their appearance.

The Belgian Malinois is a well-balanced square dog, elegant in appearance with an exceedingly proud carriage of head and neck. The dog is strong, agile, wellmuscled, alert and full of life. He is hardy and built to withstand the rugged Belgian climate. He stands squarely on all fours. The whole conformation gives the impression of depth and solidity without bulkiness. His elegance and expression denote great strength of character, reflecting his heritage as a herding breed.

Doberman’s have a trademark sleek coat that lends itself to their athletic appearance. They have short coat that is easy to maintain. The classic coat color for a Doberman is black and tan but they’re are some other possibilities. Dobermans can have a black, red, blue or fawn coat along with rust markings above their eyes, on their muzzle, throat, chest, legs and feet.

The Doberman breed standard has the following to say on general appearance.

The appearance is that of a dog of medium size, with a body that is square. Compactly built, muscular and powerful, for great endurance and speed. Elegant in appearance, of proud carriage, reflecting great nobility and temperament. Energetic, watchful, determined, alert, fearless, loyal and obedient. 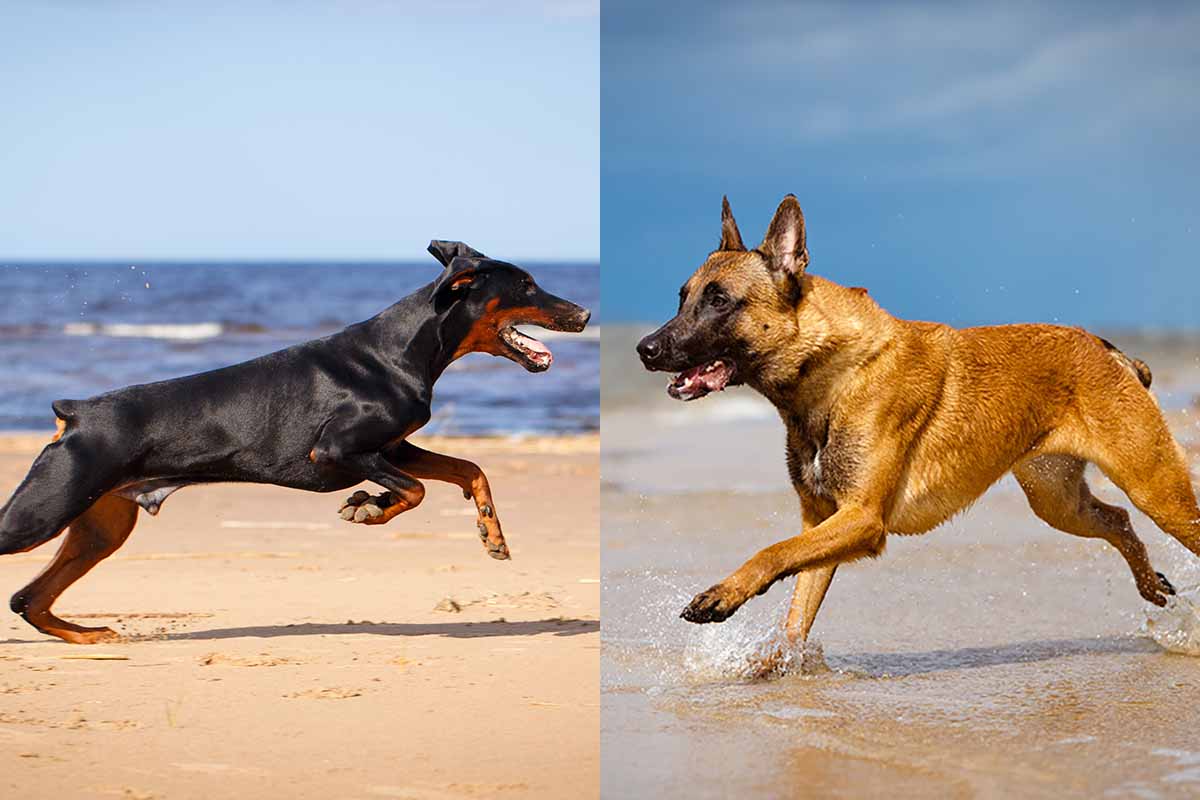 Belgian Malinois have a world-class working attitude that make these dogs highly dependable, extremely intelligent, eager to please and thrilled to serve a purpose. While we’ve highlighted their work ethic, Belgian Malinois can develop a deep bond with their owners. This loyalty can be further deepened by consistent and persistent training. Belgian Malinois want to stand alongside their dog owner rather than be seperated or left to their own devices. For that reason, Belgian Malinois owners must be prepared to give their dog a variety of exercise routines and find ways to make the smart dog feel fulfilled.

The Belgian Malinois’ breed standard outlines with regards to temperament:

Correct temperament is essential to the working character of the Belgian Malinois. He is alert, intelligent, inquisitive and confident, showing neither fear nor aggression. He is energetic, ready for action, yet highly responsive to his owner’s direction. His lively character should be evident in his proud carriage and sparkling attentive eyes.

The Belgian Malinois is an exceptional watchdog. Vigilant yet responsive, he balances all the qualities needed in a stock dog, protector and sensible working partner. He is firmly loyal to those he loves but may be indifferent with strangers.

Dobermans are dubbed a fearless dog breed that has an underlying desire to protect their owner, their family and the home. The AKC describe the Doberman beed as “royalty in the canine kingdom”. They’re a highly intelligent and a highly active dog that will require lots of exercise and plenty of mental stimulation. They’re quick learners so Dobermans will keep their dog owners on their toes. You’ll need to be creative when it comes to challenging and training your Doberman. They need lots of socialization at a young age to allow their curiosity, openness to new people and new situations and social skills to flourish.

Here’s what the AKC’s breed standard says on Doberman temperament.

Belgian Malinois have significant exercise needs. As a general suggestion, Belgian Malinois will need 60 minutes of exercise a day. However, if you speak to a Belgian Malinois owner, they’ll suggest a much longer duration. It’s not simply about taking your Belgian Malinois for a walk. They need a variety of exercise, whether it’s going for a jog, taking them to agility or doggie sport classes, intricate training sessions or allowing them to run next to your on a bike. These smart dogs want to work and feel the need to have a sense of purpose in day-to-day life.

It’s quite a similar situation with the Doberman breed. These enthusiastic workers will need at an absolute minimum 60 minutes of exercise a day. In reality, they’ll need double that. Just like the Belgian Malinois, you’ll find that taking your dog for a long walk won’t necessarily suffice. Dobermans will want lots of mental stimulation to work their high IQ.

Neither the Belgian Malinois nor the Doberman are hypoallergenic. If you’ve got allergies to dogs and you’re looking to get a canine companion that’s unlikely to trigger your allergies, you’ll need to keep looking!

Belgian Malinois are moderate shedders all year long but they’ll usually shed more twice a year at the changing of the seasons. While you can brush your Belgian Malinois once or twice a week for most of the year, you’ll probably want to give them a daily brush when they’re blowing out their coat.

The AKC describe the Doberman’s coat as “wash and wear”. In other words, Dobermans have a relatively low maintenance coat. You can give them a quick daily brush or a longer brush once a week. Even though they’ve got a short, sleek coat, it does shed.

With both the Belgian Malinois and the Doberman, dog owners will need to check their ears, teeth, eyes and paws for any sign of infection. They’ll need their nails trimmed regularly. 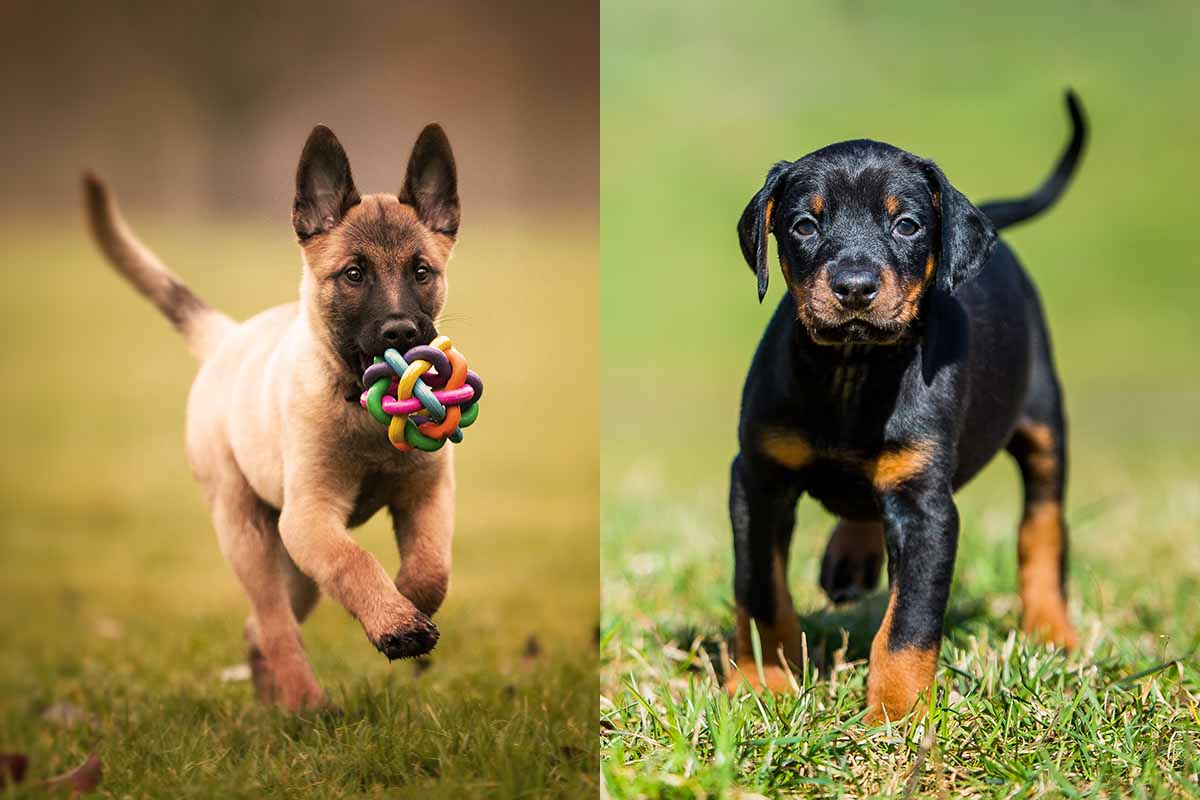 Doberman Planet, who are a great source for information on Dobies, explain:

Belgian Malinois have an average lifespan of 14 and 16 years. Doberman have a slightly shorter life expectancy of 10 to 12 years.

The Difference Between Belgian Malinois And Doberman

Belgian Malinois and Doberman differ in appearance despite both being supreme working dogs. The Belgian Malinois breed have a coat that is slightly more high maintenance than a Doberman. These Belgian dogs have a longer life expectancy than Dobermans.

The Similarities Between Belgian Malinois And Doberman

It’s clear that Belgian Malinois and Dobermans have more in common than their differences. They’re excellent working breeds that can function as police dogs, army dogs, protection dogs, guard dogs or family dogs. These two breeds are extremely intelligent, want to please, eager to serve a purpose and loyal to their owners.

Belgian Malinois Vs Doberman – In Conclusion 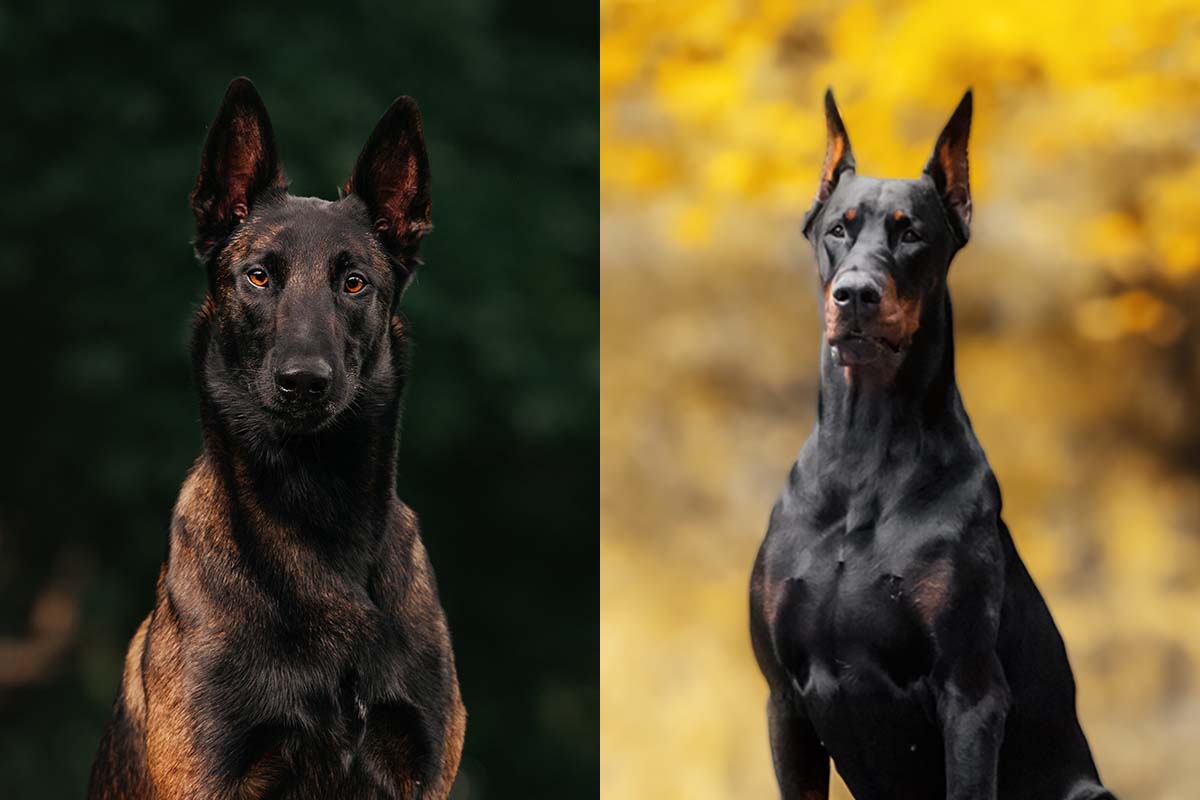 We’ve reached the end of our Belgian Malinois vs Doberman comparison article.

These two dog breeds originated in Europe – the Belgian Malinois from Belgium and the Doberman from Germany.

Although they’re two different dog breeds, they’ve got a lot in common!