The Belusky is a cross between a Belgian Malinois and a Siberian Husky.

You’ve almost certainly encountered or heard of Siberian Huskies but Belgian Malinois are a little less common unless you’ve got a good knowledge of dog breeds.

The Belgian Malinois is often described as a world-class worker due to their impressive intelligence, excellent obedience, ability to learn commands and instinctive protectiveness.

Siberian Huskies are usually friendly and sociable dogs that like to be around people, having originally associated with nomadic people in remote Russia centuries ago.

When you combine Belgian Malinois with Siberian Huskies the result is an athletic dog called a Belusky. The cross breed was thought to have originated in the USA.

In this article we’re going to take a look at the Belgian Malinois Husky Mix, looking at their size, temperament and maintenance needs.

We’ll break this feature on the Belusky dog into the following sections:

What do you call a Belgian Malinois Husky Mix?

However, their name is commonly abbreviated to Belusky. Alternatively, they can also be referred to as Huskinois.

Before we take a closer look at this cross breed, let’s learn a little more about the parents.

As their name suggests, Belgian Malinois originated in Belgium. Their name is thought to refer to the Belgian city called Malines. Starting in the late 1800s, Malinois were developed by trainers and working competitors.

Initially, they were used by Belgian cattlemen and sheepherders on farms. The American Kennel Club describes these dogs as a “peerless livestock herder” on their website.

However, they quickly earned a place as service animals within the military and police force. That’s perhaps how the Belgian Malinois are best known in modern society.

In 1911, the first Belgian Malinois arrived in the USA but it took another 48 years before the breed was recognised by the American Kennel Club after World War II.

According to the American Kennel Club, Belgian Malinois are the 43rd most popular breed in the USA. 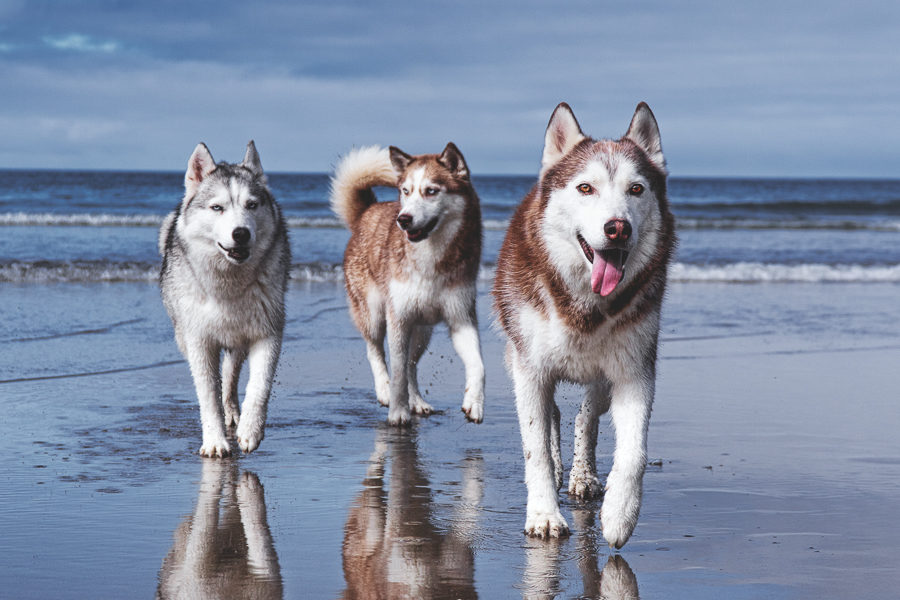 Siberian Huskies originate from Siberia region of Russia. The Chukchi nomads of north eastern Asia were credited with developing these sled dogs.

Their endurance and energy levels earned them a prized place within the Chukchi society.

The first Siberian Huskies were brought to America for the first time in 1908 for sled dog racing.

The breed achieved notoriety worldwide in 1925 when a Siberian Husky called Balto led a team of 20 mushers and 150 sled dogs over a five-and-a-half day 674-mile journey with life-saving serum to prevent an epidemic in Noma.

The American Kennel Club granted the Siberian Husky status in 1930. Initially called Arctic Huskies, their name was changed to Siberian Huskies in 1991.

Apollo is a Belgian Malinois Husky mix – and here’s the traits from each breed that Apollo’s owner sees in his dog:

Apollo does lots of “talking” like a husky, and is also extremely athletic and intelligent like a Mal. I would rate them as a high energy dog with most needing at least two hours of physical activity per day. A walk around the block will not cut it!

Belgian Malinois have a size range of 22 to 26 inches and 40 to 80 pounds depending on their sex, according to the American Kennel Club’s breed standard. The AKC sets out that male and female Siberian Huskies should be between 20 and 24 inches tall and can weigh between 35 and 60 pounds.

Therefore, we can deduce that Belgian Malinois Husky mix should be between 20 and 26 inches tall and weigh between 35 and 80 pounds.

It’s important to note that there’s no guarantee which traits a dog will inherit from each parent. So we can’t say with any certainty whether a Belusky will get specific traits associated with Belgian Malinois or Siberian Huskies.

A Belgian Malinois Husky mix will be a well built dog with an athletic appearance. Given the influence of the husky genes, a Belusky can be any color, although they’ll usually sport some black or white markings.

Their eyes should be almond in shape but the coloring can be reflective of Malinois or Husky. So they could be dark brown, blue or brown and blue (bi-eyed).

Belgian Malinois Husky mixes should have relatively erect ears but they could be pointed like a Malinois or round like a Siberian Husky.

I would compare my dogs intelligence more to that of a child than of a dog. The way he thinks and learns is just a higher level than most breeds. But that is something you will find with Malinois most of the time.

Belgian Malinois and Siberian Huskies have quite distinct personalities, so there is a wide range of possibilities when they’re combined to produce a Belusky.

They could have a tendency to herd or protect, which is a nod to their Belgian Malinois parent. You would expect a Malinois to be wary of people they don’t know. Siberian Huskies are usually friendly and outgoing even with strangers. For that reason, they don’t make great guard dogs.

Malinois need a purpose to keep them mentally stimulated, hence why so many end up as military or police dogs. Huskies can be harder to train with an independent streak.

Let’s hear what Apollo the Belusky (@apollo.the.belusky) has to say about these mixed dogs:

Each dog will vary to an extent, but they are highly intelligent, athletic, affectionate, and bond strongly to a committed owner. They need lots of exercise and consistent training. Malinois and Huskies are both “working dogs”, so if you don’t give them something to do, they can become bored and destructive. They may challenge authority or a weak leader.

You should expect a Belgian Malinois Husky mix to shed. They’ll require regular brushing (at least twice a week). They’ll blow out their coat twice a year at the changing of the seasons.

Other basic maintenance needs include brushing their teeth, checking their ears and trimming their nails.

Given Belgian Malinois and Siberian Huskies are active dog breeds, it’s no surprise a Belusky will need quite a bit of daily exercise.

It’s suggested that you give a Belgian Malinois Husky mix around one hour of exercise a day (minimum). The activities you could do with your Belusky include walking, running, swimming and playing with toys.

You’ll need to ensure you’ve got a secure garden or yard given Siberian Huskies have a reputation for being expert escape artists. They can also jump remarkably high.

The Belgian Malinois have an average lifespan of 12 to 14 years. Siberian Huskies can live between 12 and 15 years. So a Belusky is likely to live to at least 12 years old if not longer.

You’re much more likely to find a Belgian Malinois Husky mix at a rescue shelter. If you’ve got your heart set on this mix, you’re best bet could be rescue organisation that focus on northern dogs such as Siberian Huskies, Malamutes and Alaskan Huskies.

If you want to learn more about the Belgian Malinois Mix, you can also head to Instagram to do further research.

You’ll be able to get a better sense of what these dogs look like, they’re basic needs and what life is like owning one of these dogs.

In our experience, dog owners are forthcoming with information about their pets to help other prospective owners.

Here are five Belgian Malinois Husky mixes to check out on Instagram.

What do Belusky owners have to say?

We hadn’t heard of them until we adopted our dog! We did lots of research and then came across some other “Beluskies.” I had never heard the term for the mix before that. We went to a local shelter and found him there. He chose us, really. Someone had abandoned him and he had been roaming the streets for at least a month before shelter volunteers could catch him.

On whether they’re suited to first-time owners, Apollo says:

Not unless the person has done their research, spent time around both breeds, and can commit to a very active dog. I’ve found that people seek them out because of their unique appearance, but both of these breeds require much more time than an average dog. They are not the kind of dog you can leave home or outside all day and expect them to just be happy. Partnering with a good trainer and working with these pups daily is key.

If you’re interested in a Belgian Malinois Husky Mix puppy, you should contact an established and reputable breeder. They’ll usually ask you to fill out a questionnaire, place you on a waiting list and request a deposit.

So we’ve reached the end of our article on Belgian Malinois Husky mix dogs.

The cross breed are athletic and energetic dogs that have substantial exercise requirements.

Each Belusky can have a different personality depending on the traits they inherit from each parent.

There’s a lot of room for variety with regards to their appearance too.