Are German Shepherds Easy To Train?

German Shepherds were both the first canine film stars and service dogs in America.

While other dog breeds have achieved fame in recent decades, the German Shepherd was the first pup to star on the big screen.

Proving that these dogs are quick learners and able to pick up new tricks quickly, Rin-Tin-Tin starred in nearly 30 Hollywood movies.

Not only that, but a GSD rather than the dependable Golden Retriever or Labrador was the first service dog in the United States.

A man called Morris Frank had a female German Shepherd named Buddy who became the first seeing eye dog in 1928.

Aside from their working roles, these dog make great family pets and alert guard dogs at home.

Let’s take a look at the history of the German Shepherd to get a better understanding of why these dogs are easy to train.

Where do German Shepherds come from?

The German Shepherd has earned a glowing reputation for its intelligence, loyalty and versatility.


A former German military captain was responsible for starting the breed in the late 1890s.

Max von Stephanitz fell in love with a dog that he encountered at a dog show and ended up purchasing the canine.

This dog was called Hektor and he became the founding member of the German Shepherd breed.

Von Stephanitz was particularly impressed with Hektor’s “intelligence, loyalty and beauty”, which are features that have stuck with breed throughout their history.

He renamed the dog to Horand von Grafrath before making it the first member of the Verein für Deutsche Schäferhunde (Society for the German Shepherd Dog).

What are traits of German Shepherd?

The German Shepherd is described as a medium-to-large sized dog.

There are two standards: one for male and one for female.

The GSD has a wide and wedge-shaped head. They have an elongated muzzle which is ideal for tracking a scent.

These German dogs have pointed ears that given them an alert expression, fitting their reputation for being excellent guard dogs.

Another key feature of the German Shepherd is their bushy, sloping tail that is usually quite long in size.

They have very strong jaws that are only second in power to their compatriots – the Rottweiler.

Are German Shephards easy to train? 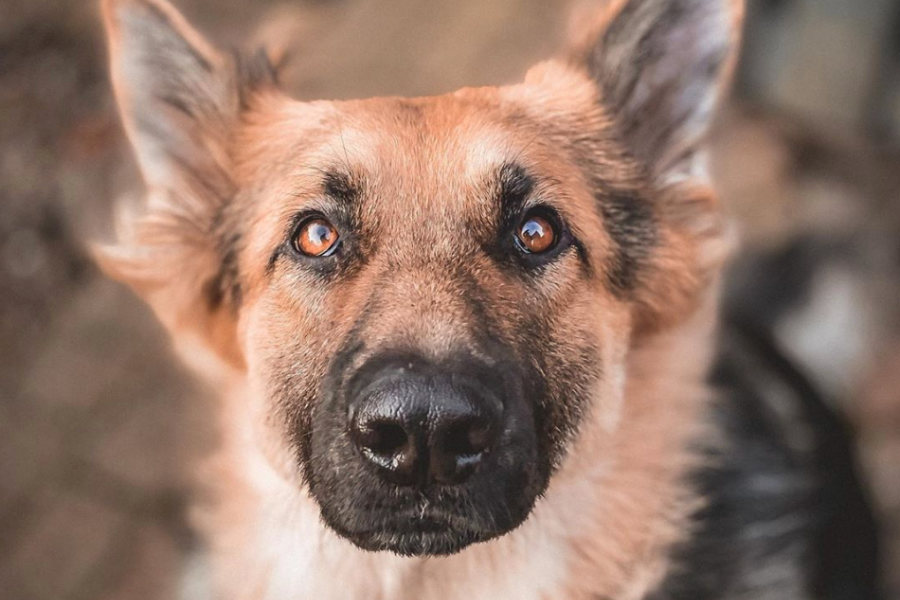 The breed have a reputation for being extremely intelligent dogs, which in turn, makes them quick learners.

The German Shepherd is ranked third out of 137 breeds in terms of intelligence. Only the Border Collie and Poodle are considered smarter than these working dogs.

In Stanley Coren’s book, “The Intelligence of Dogs”, it states that GSD are able to learn a new trick in less than five repetitions. This makes them perfect for learning new tasks and underlines their excellent versatility.

The same book goes on to say that German Shepherds will follow a first command 95 per cent of the time.

Thanks to their intelligence and eagerness to please, GSD puppies can make quick learners.

Not only that but these dogs have been bred to respond well to training. This is explains why they make great police and service animals.

We asked TikTok superstar Lola about training a German Shepherd and whether the breed is easy to train. Here’s what she told us in our interview.

Yes and no for us personally. Lola is a perfect pup in the house, she was from day one and still is now. We had no issues with barking or howling, she was toilet trained by 12 weeks and has not had a house accident since, and she’s never chewed anything of value, just two sets of oven gloves, some towels and a gnaw on some skirting boards so far. We knocked out a lot of tricks early on and she’s great at them now, all it took us was a few repetitions and reinforcement. Lola is great at picking things up in a quiet environment, such as when we are home and in the garden, but there are a few things which we still can’t get the hang of.

Things to remember when training your German Shepherd

The training will start from the first day that you bring your German Shepherd pup into your home.

It is important to remember training most be consistent and regular to see the best results from training your dog.

As a puppy, the German Shepherd can be quite playful but these dogs have a desire to please their owner and be involved as part of the family. These traits help the training process.

It is important to set the boundaries with your GSD so it quickly understands which areas of the home are off limits.

German Shepherds can ignore their owners or look to run the household unless you establish yourself as the parental-type figure.

You’ll need to be able to command the attention of the German Shepherd to make sure you’re running the show.

It is vital you socialise your GSD puppy from a young age both with other dogs and people. Doing so can help when it comes to raising a balanced and friendly dog.

Your vet should be able to recommend some puppy manners or puppy socialisation classes. Another option could be contacting an experienced dog trainer.

German Shepherds need a lot of exercise – around two hours every day. The more exercise your GSD gets, the more likely it is to be obedient.

They also do better with single commands such as “sit”, “stand”, “wait” and “come” rather than longer phases such as “stay there”.

The Kennel Club details the temperament for German Shepherds on their website:

One of the most famous examples of talented German Shepherds is Rin-Tin-Tin.

The GSD was rescued by a World War I soldier, Lee Duncan, and Rin went on to star in 27 Hollywood movies.

Another iconic German Shepherd is Buddy. He became the first service dog in America in 1928.

American Frank Morris worked with dog trainer Dorothy Harrison Eustis in Switzerland before he returned to the United States with Buddy.

In doing so, the German Shepherd became the first blind eye dog in the USA and worked with Morris until the dog’s death in 1938.

What’s more, the first guide dogs in England were also German Shepherds after they were given to veterans blinded during World War I in Merseyside.

When Does A German Shepherd Stop Growing?