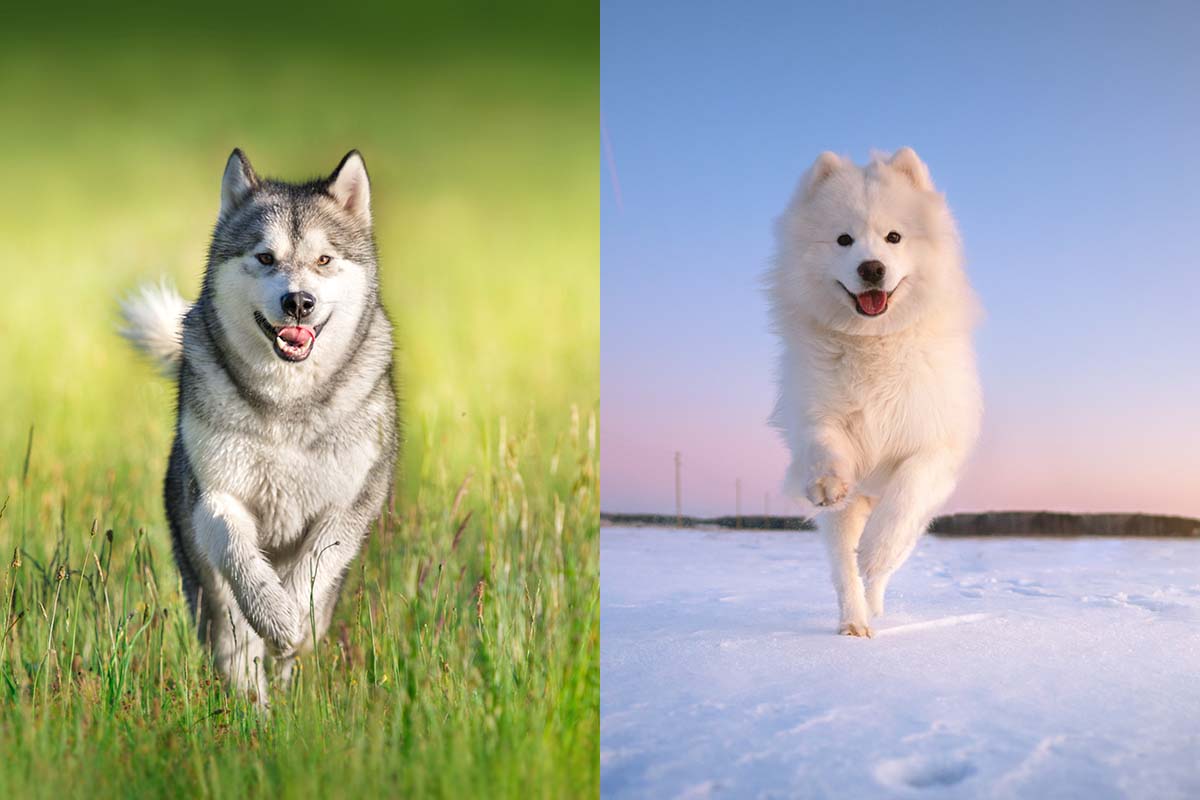 Did you know that the Alaskan Malamute and the Samoyed are two different dog breeds?

You’d be forgiven for getting these two snow dogs slightly confused but they’re two separate dog breeds recognised by the American Kennel Club.

The Alaskan Malamute is one of the largest snow dog breeds, having a history of hauling heavy loads across snow-covered lands throughout their history.

Samoyeds are undoubtedly a strikingly beautiful dog but these all-white canines are described by the AKC as being “highly functional”.

In this article, we’re going to take a look at the Alaskan Malamute vs Samoyed, examining some of their similarities and their differences.

With the introduction complete, let’s get started with our Alaskan Malamute vs Samoyed comparison article. 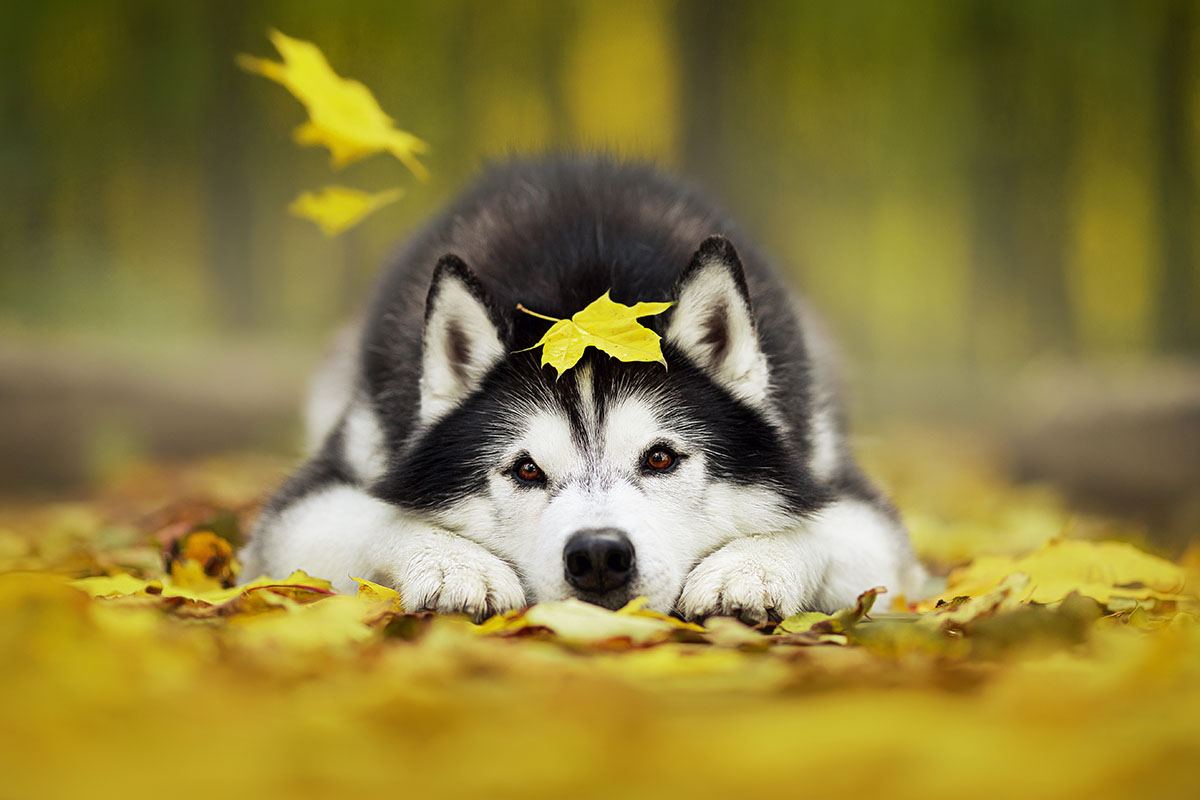 What Is A Samoyed?

Alaskan Malamutes are considered one of the oldest dog breeds seeing as their ancestors are thought to have arrived in the Americas 12,000 years ago. Wikipedia explains that Malamutes were bred by the Malimiut Inupiaq people of Alaska’s Norton Sound region. They’re thought to be descendants of the domesticated wolf-dogs who accompanied the Paleolithic hunters crossing the land bridges and migrating into North America roughly 4,000 years ago. A study in 2012 listed Alaskan Malamutes as one of 13 Basal breeds that predated the modern breeds which emerged in the 19th century.

There are different strains that have emerged within the Alaskan Malamute breed but the AKC recognises all three strains (Kotzebue, M’Loot and Hinman) as they sought to preserve and rebuild the breed’s numbers after World War 2.

Where Do Samoyed Come From?

The Samoyed’s ancestors were developed by a semi-nomadic people called Samoyedics (or Samodeic). They migrated from Asia to Siberia over a thousand years ago. The AKC explains that these Samoyed dogs were bred to work in the coldest habitable places on earth. Samoyeds would sleep with the Samoyedic people to stay warm at night under tents in unforgiving conditions. Unlike the Alaskan Malamute, the Samoyeds were not only used to haul heavy loads across the brutal terrain of Siberian, but they were watchdogs and hunters. In particular, they hunted reindeer to satisfy their appetite and promote good health.

Samoyeds made their way to England in the 18th century with Queen Alexandra showing a particular interest in these fluffy snow dogs. The breed made it’s way to the USA towards the end of the 19th century and start of the 20th century.

The AKC recognised the Samoyed as a breed in 1906. They were the first dog breed registered by the AKC, creating history!

Alaskan Malamutes will usually be between 23 and 25 inches tall and 75 to 85 pounds in weight. Samoyeds have an average size of 19 and 23.5 inches and 35 to 65 pounds depending on the sex of the dog. 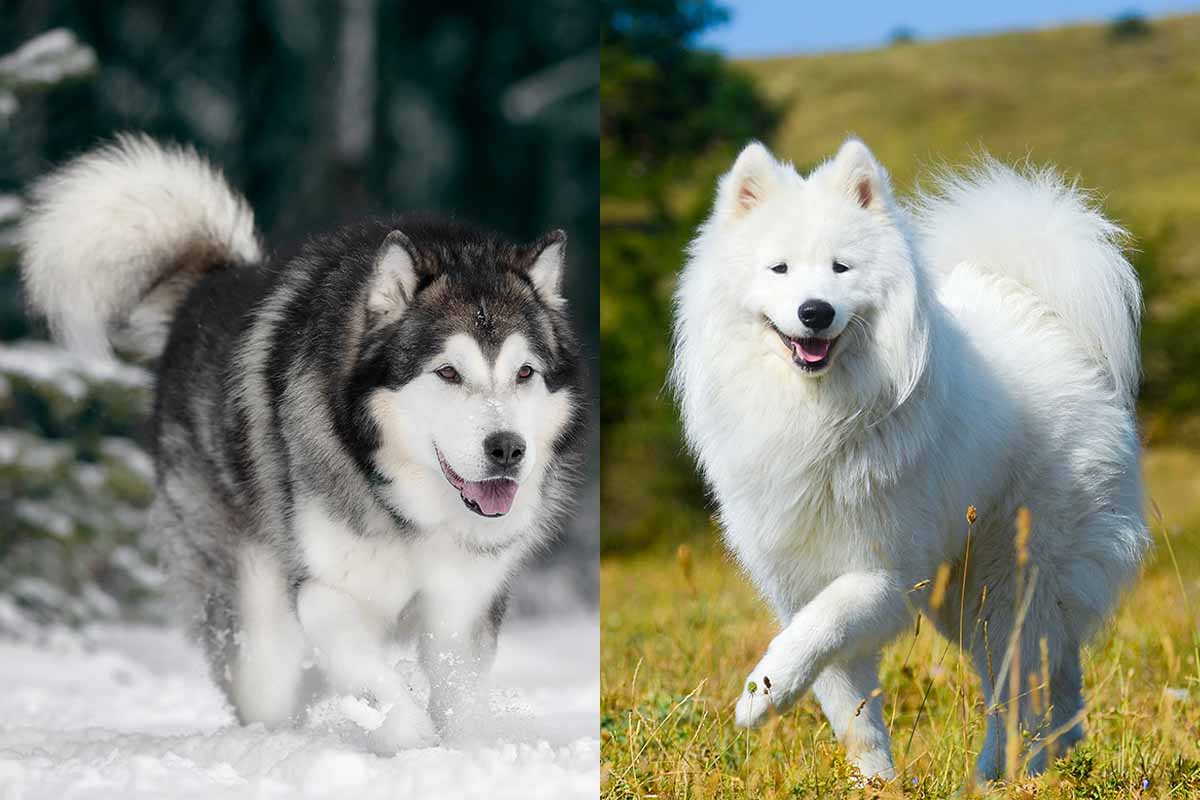 The Alaskan Malamute has a thick double coat – a think, soft undercoat and a coarse, dense outercoat. They can have a black and white coat, gray and white coat, sable and white coat, red and white coat or solid white coat. They’ll usually have markings on their face, nape of their neck and on their collar. They’ve got almond-shaped eyes and their typical eye color is brown. Their furry tail curls over the top and rest on their back with an appearance of a waving plume.

Here’s what the AKC’s breed standard has to say on Alaskan Malamute general appearance.

The head is broad. Ears are triangular and erect when alerted. The muzzle is bulky, only slight diminishing in width from root to nose. The muzzle is not pointed or long, yet not stubby. The coat is thick with a coarse guard coat of sufficient length to protect a woolly undercoat. Malamutes are of various colors. Face markings are a distinguishing feature.

Samoyeds have a trademark white coat with black or brown eyes that are almond in shape. While blue eyes are possible, it’s considered a fault. Samoyeds have triangular-shaped ears that are erect to give an alert appearance. Their tail is curled over the back but unlike the Malamute, a Samoyed’s tail will be touching their back. Here’s what the AKC write about the Samoyed’s general appearance in the breed standard.

The Samoyed, being essentially a working dog, should present a picture of beauty, alertness and strength, with agility, dignity and grace. As his work lies in cold climates, his coat should be heavy and weather-resistant, well groomed, and of good quality rather than quantity. The male carries more of a “ruff” than the female. 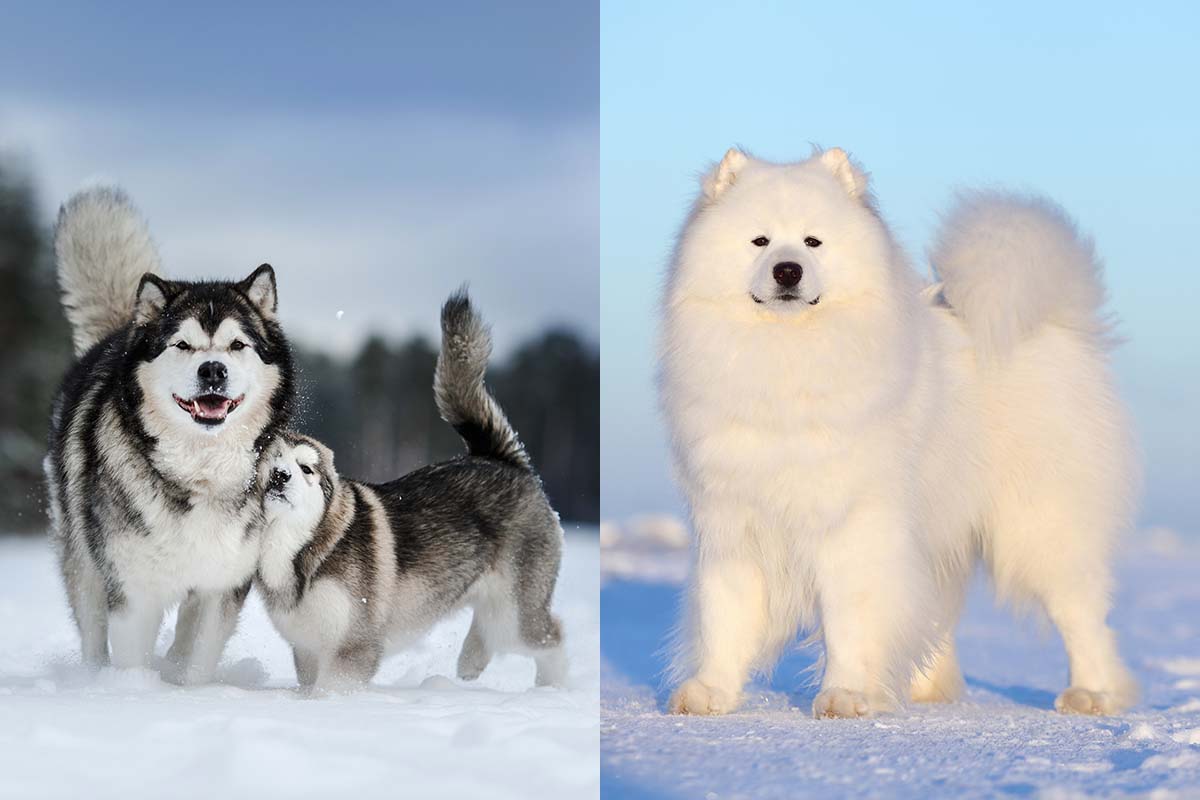 Alaskan Malamutes are an affectionate breed that can become attached to their family members. They like to be around people, giving and receiving affection. The Alaskan Malamute can make an excellent family pet but they’re not effective watch dogs as they’re not big barkers. Indeed, they’ve earned a reputation for being quiet dogs that don’t bark a lot.

They can have a high prey drive and patchy recall so it’s a good idea to keep your Alaskan Malamute on a leash. They won’t need much encouragement to pursue small animals such as cats, rabbits and squirrels. While they’re reasonably good with children, their sheer size can make them a hazard as they can inadvertently knock over a child.

The dogs are natural-born leaders so Malamute owners will need to dedicate themselves to regular training sessions from a young age.

The Alaskan Malamute breed standard has the following to say on their temperament.

The Alaskan Malamute is an affectionate, friendly dog, not a “one man” dog. He is a loyal, devoted companion, playful in invitation, but generally impressive by his dignity after maturity.

Samoyeds are considered a friendly, easy-going and sociable breed that relish being around their owners. This trait is characterized by the fact that Samoyeds are often dubbed the “smiling Sammy”. Unlike the Malamute, Samoyeds have a reputation for being a breed that likes to bark.

As we mentioned in the history section, Samoyeds were traditionally used as watch dogs and seeing as their ancestors could take down a polar bear, they can be quite effective at guarding the home if that’s their purpose. Samoyeds can make excellent family pets thanks to their affable and playful nature. Their playfulness could be branded as mischievousness.

Samoyeds require consistent and regular training from a young age to lay down a good foundation.

The Samoyed Club Of America provide a description of their disposition:

Intelligent, gentle, loyal, adaptable, alert, full of action, eager to serve, friendly but conservative, not distrustful or shy, not overly aggressive. Unprovoked aggressiveness is to be severely penalized. 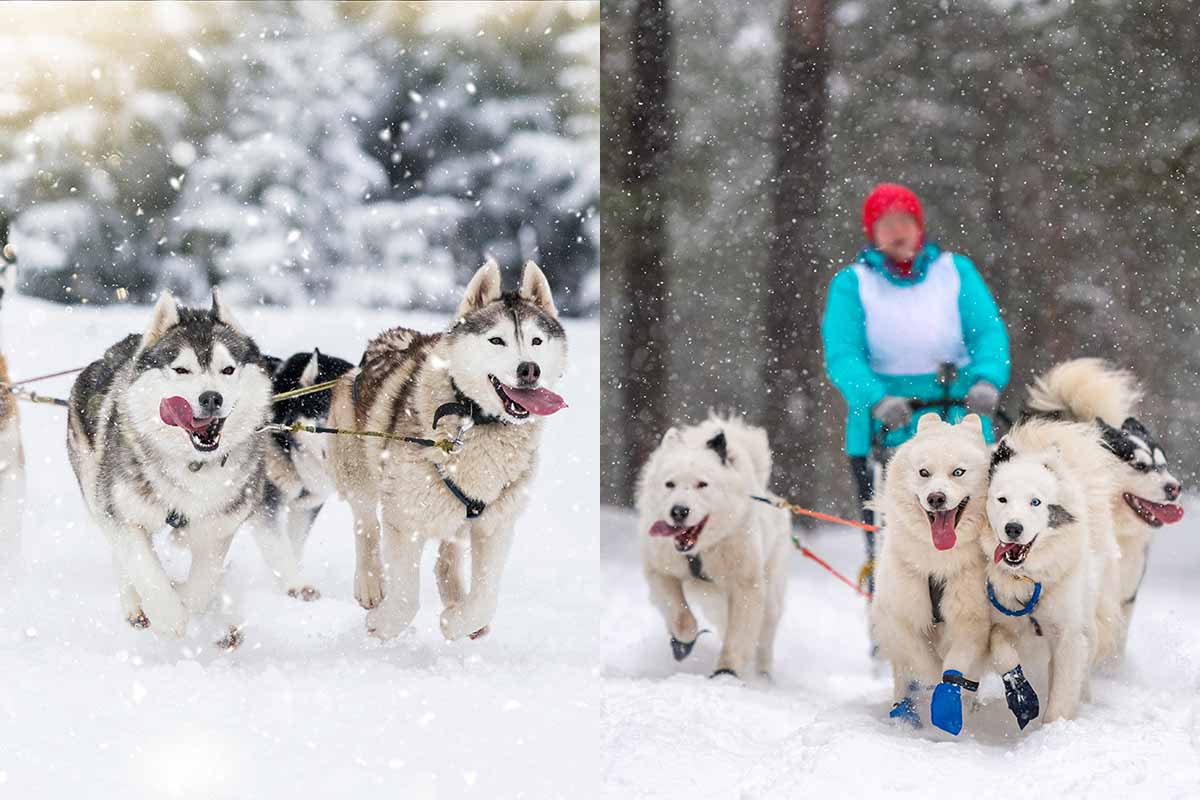 Alaskan Malamutes are members of the AKC’s working group so they have an underlying desire to put to work. Whether that’s agility training, taking part in hauling competitions or obedience trials. However, Malamutes will be just as happy going for a hike, a run or a swim. You’ve got lots of options with your Malamute.

Wag Walking suggest an Alaskan Malamute will need 90 minutes of exercise a day. They’ll need plenty of physical and mental stimulation to prevent destructive behaviour, such as chewing furniture!

Samoyeds are also members of the AKC’s working group but they’ve got slightly less exercise needs than the Alaskan Malamute. They’ll enjoy exercising with their family members, whether it’s going for a walk, a trip to the dog park, a family hike in the countryside or playing in the garden.

Their Wikipedia page suggests that they can also excel at dog agility trials, carting, obedience, showmanship, flyball, tracking, mushing and herding events. Wag Walking suggest around 60 minutes of exercise a day for Samoyeds.

However, it’s important to note that Samoyeds have a high prey drive like Malamutes. If you don’t have confidence in your Samoyed’s recall, it’s a good idea to keep them on a leash until you’ve mastered their recall.

Neither the Alaskan Malamute nor the Samoyed are hypoallergenic. If you’re looking for a low-shedding dog that won’t trigger your allergies, these two snow dog breeds aren’t a good fit for you.

Alaskan Malamutes have a double coat that will shed throughout the year. However, their shedding will intensify during the changing of the seasons. Alaskan Malamute owners will need to brush their big dog daily to remove dead or loose hair. They’ll need an even more rigorous brush during shedding season. The AKC recommend bathing your Alaskan Malamute every six or eight weeks.

Samoyeds, like Malamutes, will need a daily groom to maintain the appearance and health of their coat if your smiling Sammy is shedding. If your Samoyed isn’t shedding much, you may be able to get away with brushing your snow dog two or three times a week. During shedding season, they’ll definitely need a daily brush. Samoyeds will also require a bath every eight weeks or so. However, if your Samoyed likes to roll in dirt or other miscellaneous smelly substances on your daily walk, you may need to bathe them more often!

Just like with any dog breed, both Malamutes and Samoyeds will need their teeth brushed and nails trimmed regularly. Dog owners should keep an eye on their ears and eyes for potential infection. 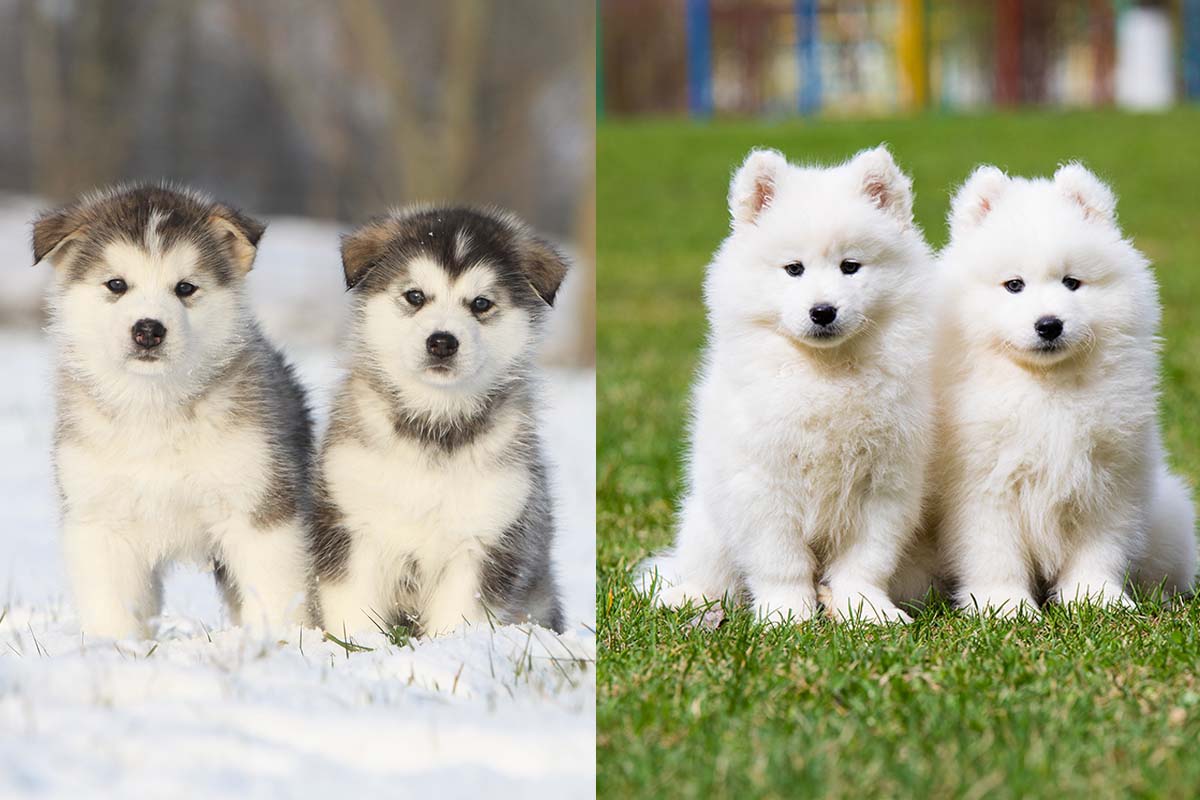 Alaskan Malmautes are large dogs with a relatively modest price compared to some other breeds. They usually cost between $1000 (£800) and $2000 (£1800) from a reputable Malamute breeder.

It’s a good idea to visit your breeder, ask to see your pup’s parent, request proof of health checks and vet examinations as well as vaccinations.

Alaskan Malamutes have an average lifespan of 10 to 14 years, while the Samoyed’s life expectancy ranges from 12 to 14 years.

The Difference Between Alaskan Malamute And Samoyed

Alaskan Malamutes are larger dogs than Samoyeds despite both breeds being adept at hauling heavy loads over snow-covered land. Malamutes have a range of coat colors, whereas Samoyeds have all-white colouring with their trademark smile. Their tails both carry over onto their back but the Samoyed’s tail will actually touch their back. The Malamute will need slightly more exercise on a daily basis than the Samoyed but both breeds have substantial exercise needs. Malamutes are quiet dogs that rarely bark but Samoyeds make adept watchdogs as they’re quick to use their vocal chords to raise the alarm.

The Similarities Between Alaskan Malamute And Samoyed

While we’ve touched upon some of the differences in the paragraph above, Alaskan Malamutes and Samoyeds have plenty in common. They’re two dog breeds that are built to withstand the cold, harsh conditions of the uppermost regions of the northern hemisphere. They can be independent thinkers and strong-willed so Malamutes and Samoyeds will need consistent and persistent training from a young age to help establish obedience. These two breeds have a high prey drive so you’ll need to be cautious if your dog is off leash on your walk as well as ensuring your backyard or garden is properly secured to prevent these escape artists working their magic.

Alaskan Malamute Vs Samoyed – In Conclusion 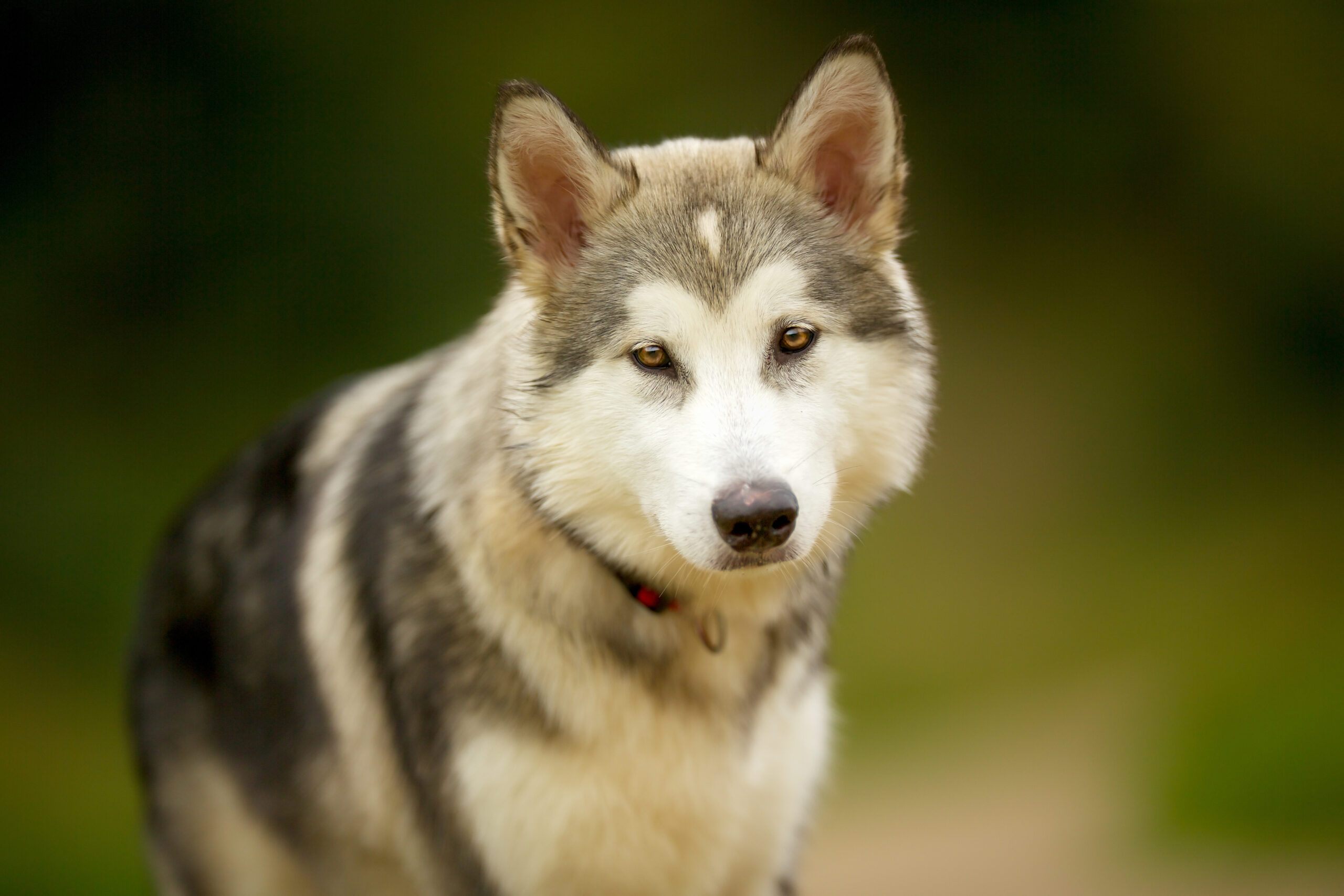 We’ve reached the end of our Alaskan Malamute vs Samoyed comparison article.

They’re two sled dog breeds that are members of the AKC’s working group seeing as they’re accustomed to hauling loads and pulling sledges.

Alaskan Malamutes and Samoyeds are recognised by the AKC but at the time of writing, the Samoyed is slightly more popular with dog owners in the USA.